Two of these cases were in Taipei, while the other two were in New Taipei. The two Taipei cases were in Wenshan, while the two New Taipei cases were in Sanchong. One of the cases classified as in Taipei lives with one of the cases that lives in New Taipei, with the source of infection for one of these cases being unknown. However, these two cases are not linked to the Delta variant kindergarten cluster and were found due to testing to visit hospitals, but are thought to be an older case. The two imported cases are linked to an Egyptian man who was reported yesterday as part of the cluster, having returned to Taiwan at the same time on August 4th. These cases were found in quarantine

The cluster among pilots in Taoyuan has not expanded, with 314 tests and 180 tests for cases having found no new positives apart from those already known. 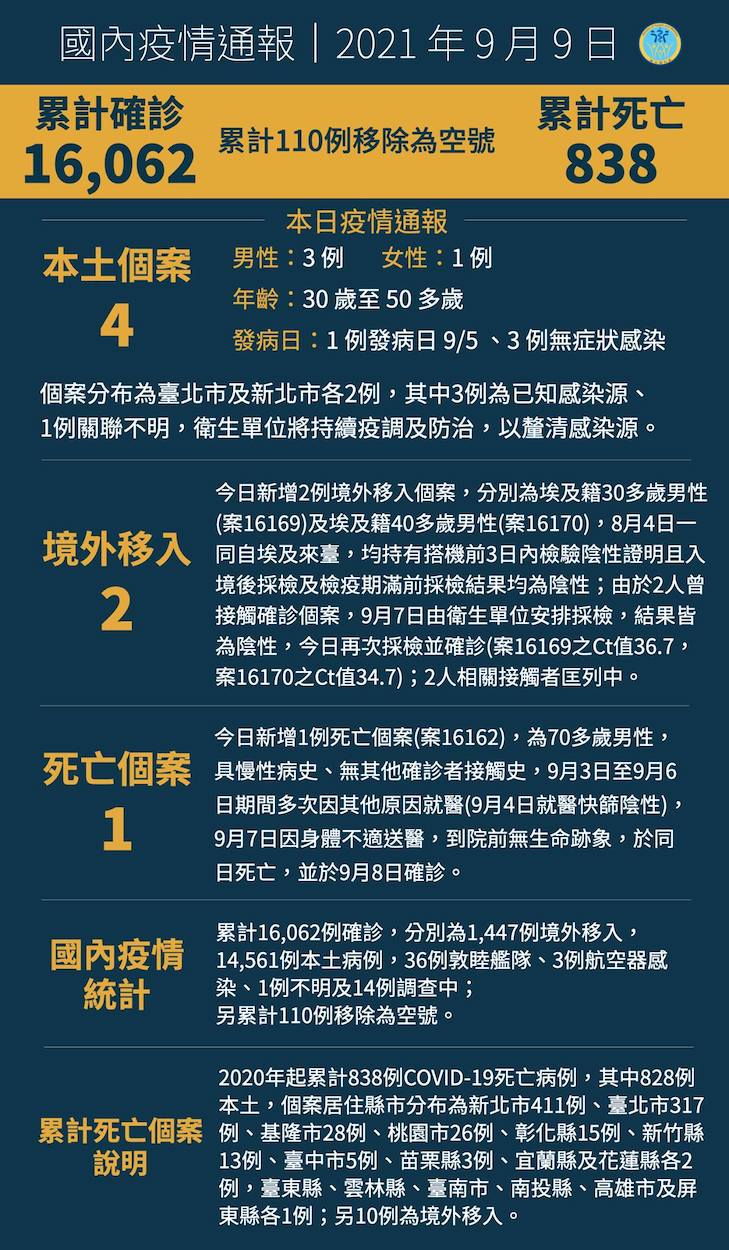 Tests of 785 residents of the apartment complex that the Banqiao kindergarten cluster expanded to all resulted in negative test results. However, a worker involved in renovation in the building was found positive. This man is believed to not have entered the building, but was tested by the company he worked for, and was tested in the neighborhood. His wife was also found to have become infected. Genetic testing is under way to see if these cases are linked to the kindergarten cluster. Infections took place in the “B” building of the apartment complex on the 10th, 11th, and 15th floors.

Symptoms are light for most cases part of this cluster, including of an anesthesiologist working at the National Taiwan University Hospital (NTUH) included in this cluster. 12 tested at the workplace and 91 tested as part of expanded testing for this case were all negative. 29 were put on self-health management.

There has been at least one wave of transmission in the Banqiao cluster, but how many took place is still being evaluated, and the verdict is still out if transmission has taken place within the community.

910,000 doses of BioNTech arrived at Taoyuan International Airport this morning around 6 AM. This is the second delivery of BioNTech that Taiwan has received to date. 1.84 million doses of BioNTech have arrived in Taiwan to date. The two shipments of BioNTech will prioritize vaccinations for individuals between 12 and 18 and between 18 and 22.

106,595 were vaccinated yesterday, bringing coverage to 45.39%, which is 49.68 per 100 people. According to the CECC, individuals in classes that have been stopped as a precautionary measure can be vaccinated, but individuals in quarantine should wait until they are out of quarantine.

The CECC stated that there have been around 1,000 cases of unusual symptoms after vaccination to date. The CECC is considering international standards for what to do when individuals have no antibody response to vaccination.

Plans for the mid-autumn festival will not change unless there is a shift in the situation. The CECC currently has no plans to shift to level three. Stimulus vouchers will be rolled out on October 8th. There are also no current plans to change this if the situation holds steady. 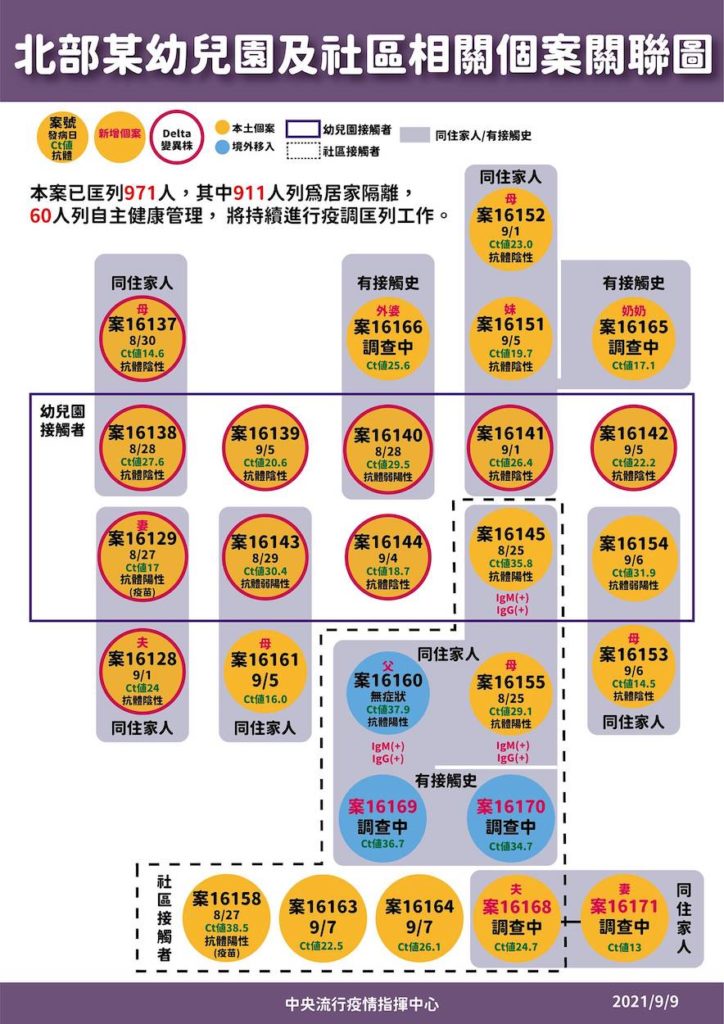 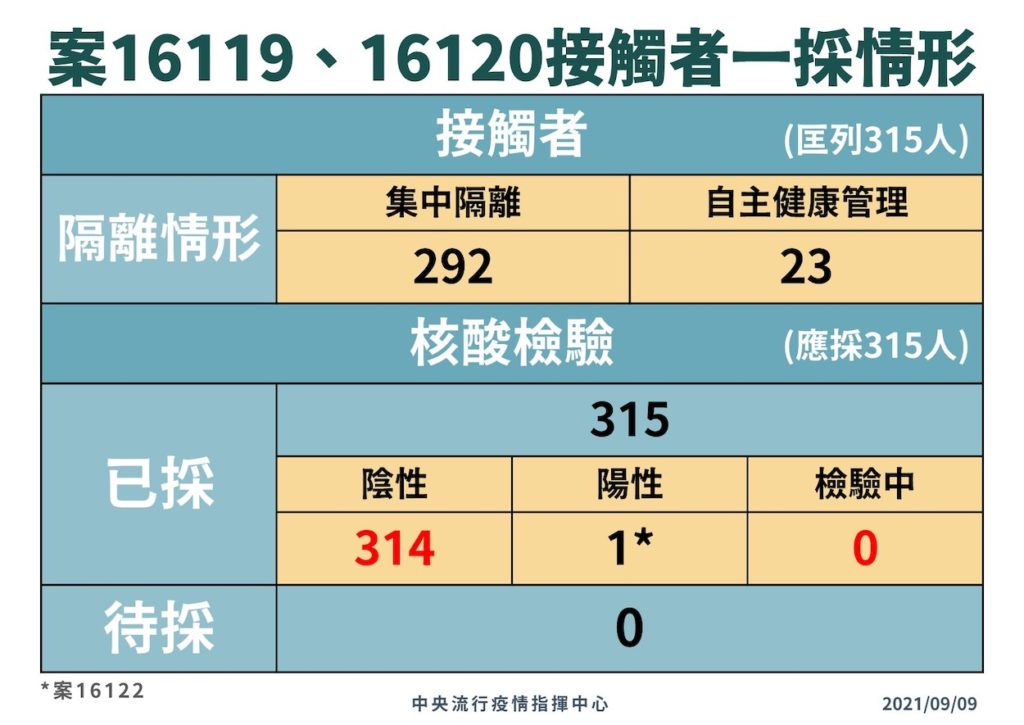 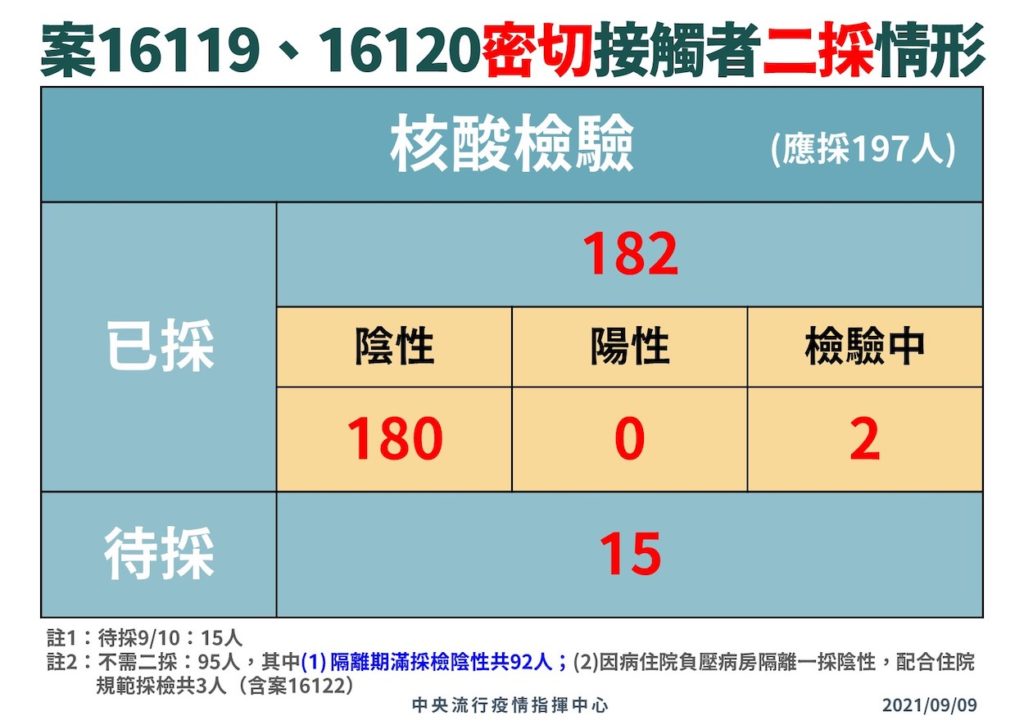 According to New Taipei mayor Hou You-yi at New Taipei’s press conference today, more than 12,000 were tested at neighborhood testing sites in New Taipei in the past three days. Classes suspended as a precautionary measure can resume classes after PCR tests. That the “A” building of the apartment complex in Banqiao was not quarantined but the “B” building was—with visitors to the “B” complex also quarantined—is based on contact tracing. Individuals that parked in the apartment complex or delivered food there are also included in contact tracing. Hou called for increased disinfection of common areas in apartment buildings, such as elevators and mailboxes.

Taipei mayor Ko Wen-je stated that 2,073 tests at neighborhood testing sites yesterday found no new cases. Concern over the recent clusters has led to a visible uptick in the number of people going to get tested in recent days. Ko otherwise defended that Taipei and New Taipei have not escalated measures in coordination, despite frequent rhetoric about how both were deeply interlinked and had to carry out uniform measures in the past, stating that the situation with the infection was not the same. Ko asserted that the mid-autumn festival was still ten days away and that the post-COVID world required flexibility.