What Does the Formation of the Taiwan People’s Party Mean for 2020 Elections?

TAIPEI MAYOR Ko Wen-je officially held an opening ceremony for his newly formed Taiwan People’s Party (臺灣民眾黨) earlier today, which was also Ko’s 60th birthday. The opening ceremony was attended by 72 of the party’s 111 initial members and Ko was elected as the party’s first chair.

The official rendering of the party’s name in English is “Taiwan People’s Party,” which is to be shortened to “TPP.” The Chinese name of the party is to be abbreviated as 民眾黨 (Mínzhòng dǎng), a name which heavily resembles the DPP’s Chinese abbreviated name, 民進黨 (Mínjìndǎng). With it hotly speculated that FoxConn CEO Terry Gou could potentially run on a joint presidential ticket with Ko after Gou failed to win the KMT’s presidential nomination in party primaries, this seems to be one of the reasons for not choosing the abbreviation 臺民黨 (Táimíndǎng), which would sound similar to Gou’s given name in Chinese, 台銘 (Táimíng). It is unknown if Gou would join the party if he decides to run on a joint ticket with Ko. 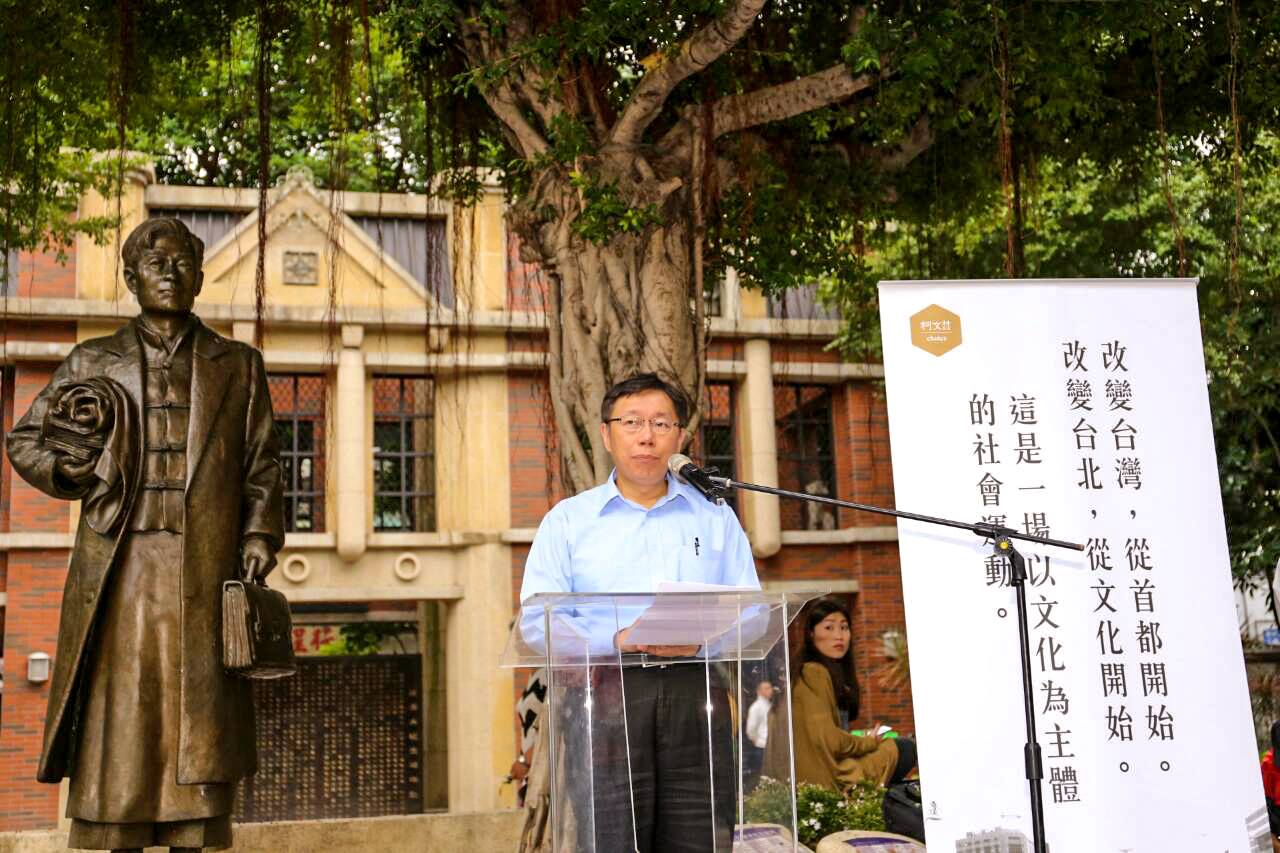 It has long been thought that Ko has presidential ambitions. Ko announcing the formation of the TPP seemed to confirm this, since forming a party would be in preparation for a presidential run. What Ko lacks most if he were to run for president is having a party to back him, in providing him the mobilization apparatus he currently lacks. After losing to Kaohsiung mayor Han Kuo-yu in the KMT presidential primaries, it has also been speculated that Gou could perhaps run as an independent.

Gou was not present at the opening ceremony of the TPP but was de facto represented by close aide Amanda Liu, who also serves as the executive director of the Yonglin Foundation. Gou and Ko have reportedly already met to discuss possible cooperation, with it appearing that Ko is willing to subordinate himself to Gou as his vice president. Liu claimed that she was in attendance at the party opening ceremony as an individual and that she had not spoken to Gou about attending the opening ceremony, but only spoken about it to Gou’s son, Yonglin Foundation chair Gou Song-zheng. However, such claims are unconvincing.

It was previously speculated that Gou or Ko could possibly align with former KMT majority speaker Wang Jinpyng, formerly seen as the leader of the “Taiwanese” faction of the KMT, on a joint ticket to run for president.

But instead of either Gou or Ko running on a joint ticket with Wang, there is increasing talk of all three aligning together to work as part of the same campaign, though it remains unclear as to how such an alliance would work in terms of hierarchy between the three. A closed-door meeting is reportedly scheduled between the three in the near future and both Gou and Wang sent flowers to Ko congratulating him on the party’s formation.

Taipei Cultural Foundation deputy chair and DPP member Zhang Yi-shan (張益贍) is also a party member, Zhang announcing that he will soon withdraw from the DPP. An unusual characteristic of the TPP party charter is that it allows for party members to be members of more than one party, but as Zhang may be an early example of, it is unlikely that other parties will tolerate this. 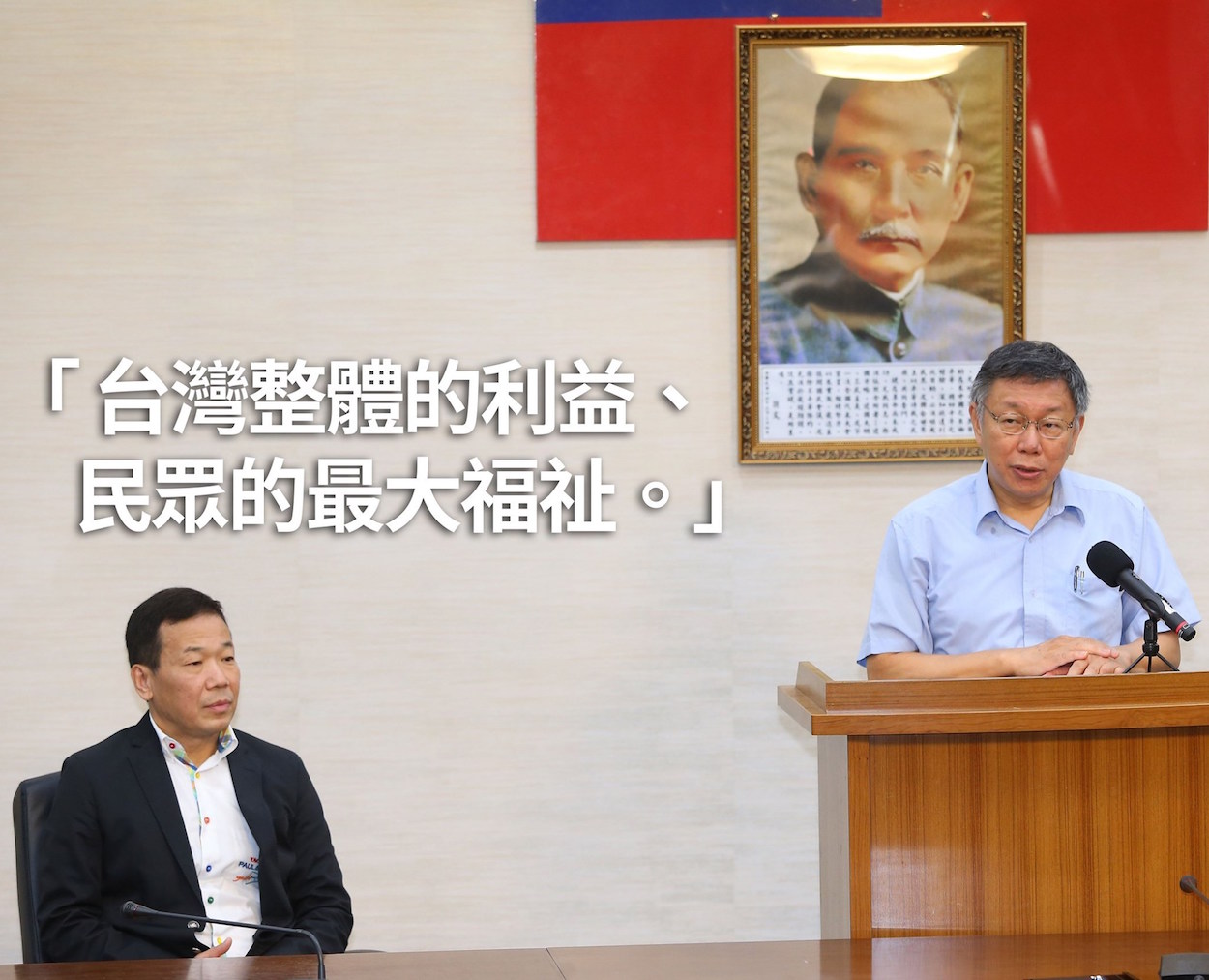 Raising eyebrows in particular, however, has been the presence of former KMT city counselors Xu Li-xin (徐立信) and Zhong Xiao-ping (鍾小平) in the party, the latter of which is a former New Party member, previously sought the KMT’s mayoral nomination in 2014 and 2018, and is currently seeking to oust Freddy Lim as legislator in the Zhongzheng-Wanhua district of Taipei. Academic Weber H. W. Lai is also known for strongly pro-KMT and pro-China views.

This continues the pattern of Ko recruiting former KMT members to his efforts at establishing a party to back his political ambitions. This also occurred with Ko’s informal “White Force” or “Colorless Force” (白色力量) in the lead-up to 2018 mayoral elections, which was speculated to be an early attempt at forming a party to prepare for a presidential run. “White Force” members included Wang Zhi-ya (王致雅), who ran in the Daan-Wenshan area as an independent after failing to secure the KMT nomination, and New Party candidate Hung Shi-ji (洪士奇), who ran in the Songshan-Xinyi area.

With plans by the TPP to run legislative candidates in 2020 elections, it is unknown who will serve as the newly minted party’s candidates. But as been noted by Taiwanese media, there is an unusual lack of prominent young people in the TPP, with notable younger members being singer and actor Hsieh Ho-hsien (謝和弦), who is 32 and Huang Yu-ying (黃瀞瑩), a member of Ko’s campaign team and an Internet personality, who is 27. The lack of prominent young members recruited to the party occurs despite the fact that Ko is thought of as highly popular among Taiwanese young people.

Indeed, while Ko likely still enjoys the support of many younger median and swing voters, indications are that he will come into conflict with pan-Green young people. Sunflower Movement activist, Internet comedian, and music festival organizer Indie DaDee, a Ko supporter in 2014, organized an event to destroy to Ko campaign merchandise outside of the opening ceremony of the TPP earlier today. The opening ceremony also saw protest by the Taiwan Solidarity Union and other pro-Taiwan groups.

There are also indications that the TPP will come into conflict with not only the DPP but also the NPP. Ko has lashed out against President Tsai Ing-wen numerous times in past weeks, attempting to depict Tsai as dangerously provoking China through her actions, attacking Tsai for not endorsing him in 2018 mayoral elections, and claiming that the DPP hired American author Ethan Gutmann to defame him in organ harvesting allegations that date back to 2014—although this would be illogical, seeing as the DPP endorsed Ko in 2014. Ko also claims that officials surrounding Tsai are corrupt, as reflected in a recent cigarette smuggling scandal, and has lashed out at former Sunflower Movement leader Lin Fei-fan—who recently took up a post as deputy secretary-general of the DPP—on numerous occasions because of Lin’s criticisms of Ko’s pro-China shift in past years.

Essay released by the NPP critical of Ko

On the other hand, it has long been a matter of concern for the NPP that many NPP voters are also Ko supporters, as independents who are not aligned with either the pan-Green or pan-Blue camps and who may support Ko and the NPP as both alternatives to the KMT and DPP. Some party candidates endorsed Ko in 2018 elections, provoking controversy within the party, and leading to accusations that these candidates were opportunistically hoping to benefit from the public exposure which would come associating with Ko.

However, with the party shifting toward endorsing Tsai Ing-wen for reelection after Freddy Lim’s departure from the NPP over the issue, the party released a statement critical of Ko earlier today. Such criticisms were with regards to Ko’s claims that he would address the housing crisis for young people in Taiwan but failure to take action to do so as Taipei mayor, in addition to his talk of curbing corruption between government officials and businessmen but his interest in aligning with members of the pan-Blue camp with a history of being involved in illicit business practices, such as Terry Gou, Zhong Xiao-ping, and Xu Li-xin.

Party members that endorsed Ko in 2018 mayoral elections, many of which threw their weight behind calls in the party to endorse Tsai in 2020 presidential elections, have veered away from endorsing him in 2020 presidential elections, claiming that support for Ko being reelected as mayor of Taipei does not mean support for Ko becoming president of Taiwan. To this end, it is noteworthy that Ko’s party includes Zhong Xiao-ping, who is hoping to oust recently departed party member Freddy Lim as legislator of the Zhongzheng-Wanhua district of Taipei. Lim remains close to many members of the NPP after his departure yet actually endorsed Ko in 2018 Taipei mayoral elections, putting him at odds with then-NPP chair Huang Kuo-chang.

The broader political stances of the TPP are to be seen. At the opening ceremony of the TPP, Ko vowed a “pragmatic” cross-straits policy, supportive policies for young people lacking in the economic opportunities enjoyed by their parents, and endorse rule of law in Taiwan. In line with Ko claiming to be beyond pan-Green and pan-Blue distinctions as a political independent, the party’s name is notable, seeing as it is named after the original Taiwanese People’s Party founded in 1927 as Taiwan’s first political party by Chiang Wei-shui and others.

Chiang Wei-shui, who shares the name birthday of August 6th as Ko and the same profession as a doctor—hence the significance of holding the opening ceremony for the TPP today—is remembered as a symbol of Taiwanese identity and seen as a political predecessor by Taiwanese identity activists. That being said, the ideology of the original Taiwanese People’s Party was Sun Yat-sen’s Three Principles of the People. As such, Ko likely chose the name to try and appeal to members of both the pan-Green and pan-Blue camps. The Chiang Wei-Shui Cultural Foundation has been among those critical of Ko for appropriating the name, with the view that Ko has drifted away from the pro-Taiwan ideals held by Chiang in spite of Ko’s claims to be Chiang’s successor. 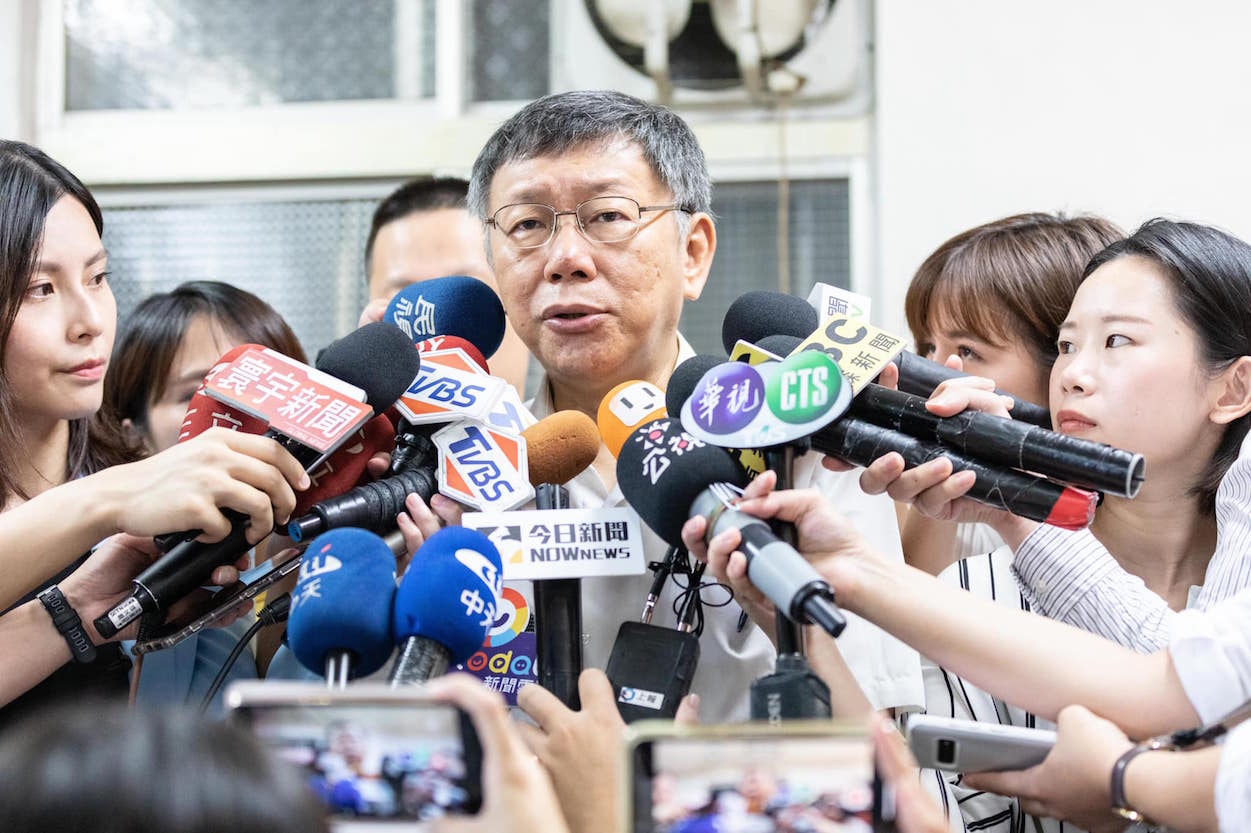 Ko continues to come under fire from the pan-Green camp for repeated statements claiming that Taiwan and China are members of the same family, most recently said in Shanghai last month while protests rock Hong Kong regarding an extradition bill pushed for by Beijing. Ko is also criticized for his affiliation with members of the pan-Blue camp—even figures such as “White Wolf” Chang An-Lo, a former killer of political dissidents for the KMT—and his failure to clear up accusations of illicit ties with the Chinese government in the Taipei city government and Taipei city police, as observed in the Sing! China incident or the findings of an undercover Al Jazeera investigation that pro-China groups such as the Chinese Concentric Patriotism Alliance have ties within the Taipei city police.

This has taken place in spite of the fact that Ko originally ran on a pro-Taiwan platform in 2014, despite nominally claiming to be beyond pan-Green and pan-Blue distinctions, with a marked political shift by Ko in past years. Ko will likely come under increasing fire from the pan-Green camp going in 2020 elections, then.

It proves unlikely that Ko would be able to win the presidency in the absence of a nationwide mobilization network, even if he aligns with Terry Gou, Taiwan’s richest man, and even if Gou’s wealth provides Ko a war chest for campaigning. The TPP is unlikely to grow substantially enough within the mere five months remaining before 2020 elections to provide Ko this nationwide mobilization network. Yet the possibility of Ko splitting the pan-Green vote through an attempted presidential run, leading to a KMT victory, remains quite high. Whether this takes place is to be seen.