Many participants were Thai residents of Taiwan, particularly students. A previous solidarity rally took place two weeks ago outside of the Thai representative office in Taiwan. The rally was organized by the Taiwan Alliance for Thai Democracy (台灣推動泰國民主聯盟), a recently formed group, and was timed to coincide with a large-scale demonstration in Thailand today. 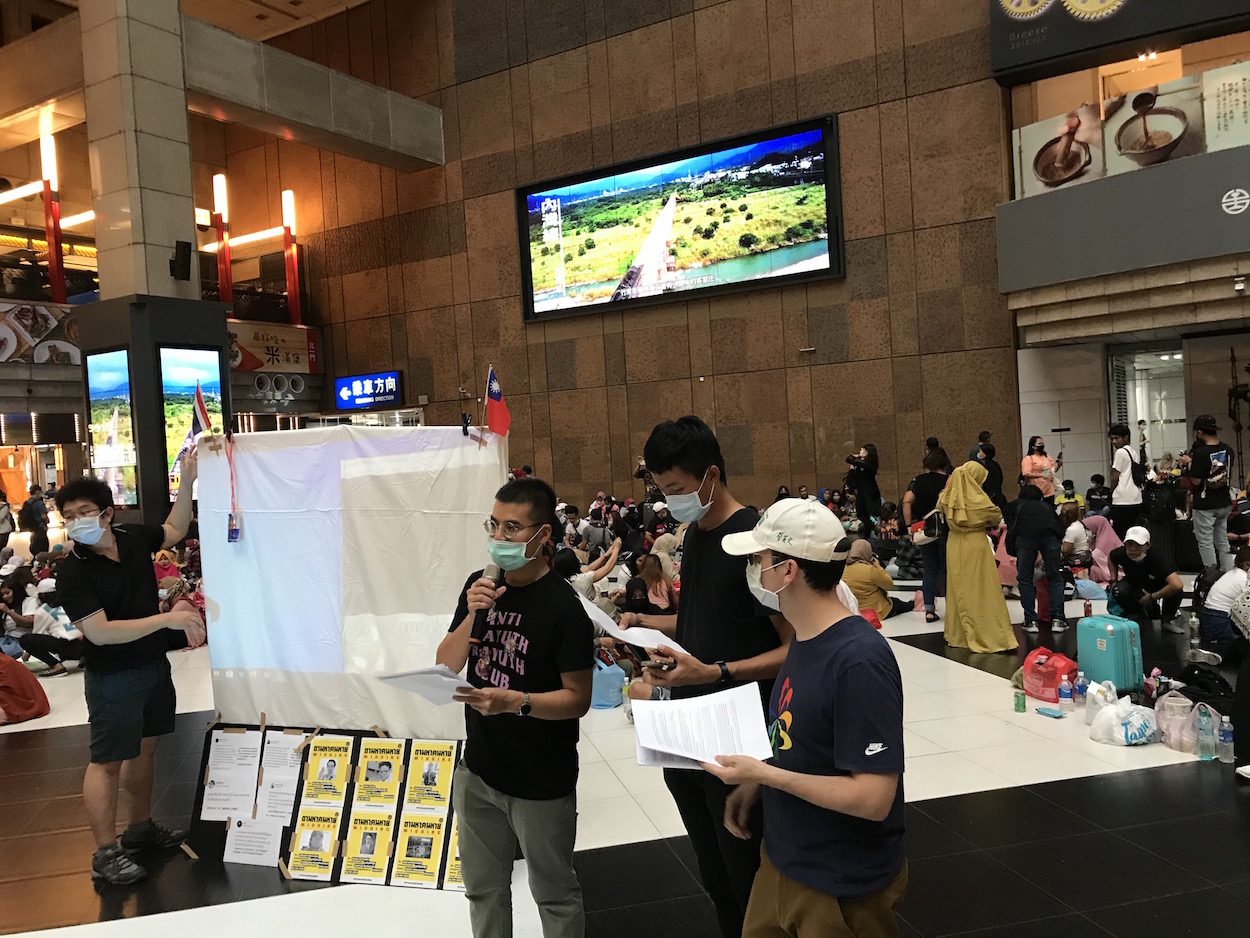 The solidarity rally today was framed in terms of calling for democratic freedoms writ large, including freedom of speech, and standing up against authoritarianism in Asia, as a result of which the event was also framed as a solidarity rally for Hong Kong. As such, speakers at the rally stated that they also stood in solidarity with pro-democracy demonstrations in Hong Kong, and efforts at resistance against the authoritarian rule of Xi Jinping and the Chinese Communist Party. The event description for the demonstration also referenced the Milk Tea Alliance social media phenomenon, an unusual example of online transnational solidarity against regional authoritarianism. Demonstrators in Thailand are thought to have adapted tactics from the protests that have taken place in Hong Kong over the past year. 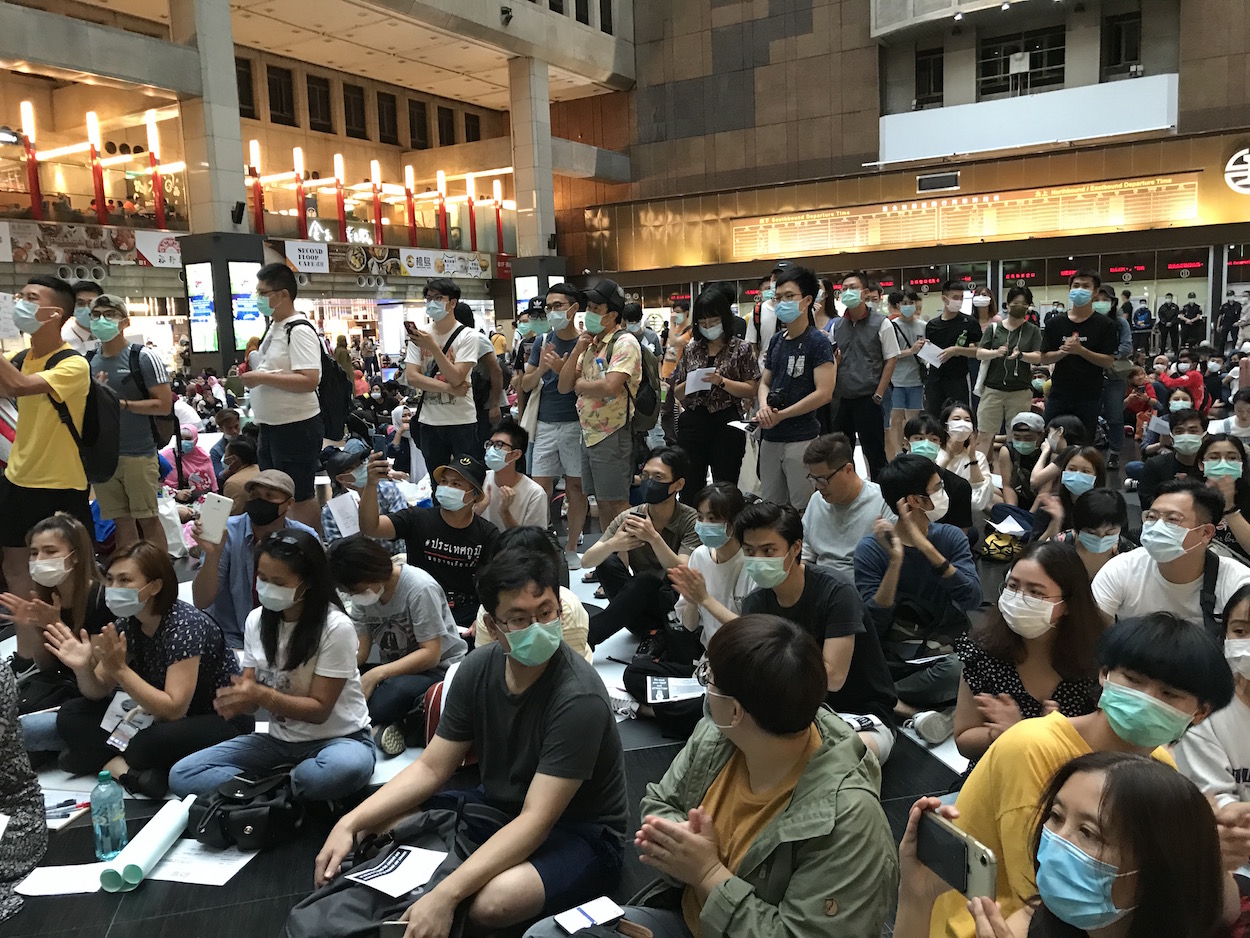 The rally began with speakers emphasizing the need to wear masks and maintain social distancing measures, with Taiwan Railways Administration workers periodically wandering through the demonstration with signs reminding participants to wear masks. The rally was live-streamed, with several hundred watching online.

A video of recent demonstrations in Thailand was projected onto a screen. Remarks by organizers in Thai were translated into Mandarin and English. Flyers explaining the demands of the demonstration were handed out among participants, including an explanation of the protest salute of holding up three fingers, originally inspired by The Hunger Games movies, commonly seen in the current demonstrations. Participants chanted “Stop terrorizing the people” in Thai and signs with pictures of disappeared political dissidents were attached to a board placed below the projector screen. One participant also brought a Hong Kong-style Lennon Wall to the demonstration. 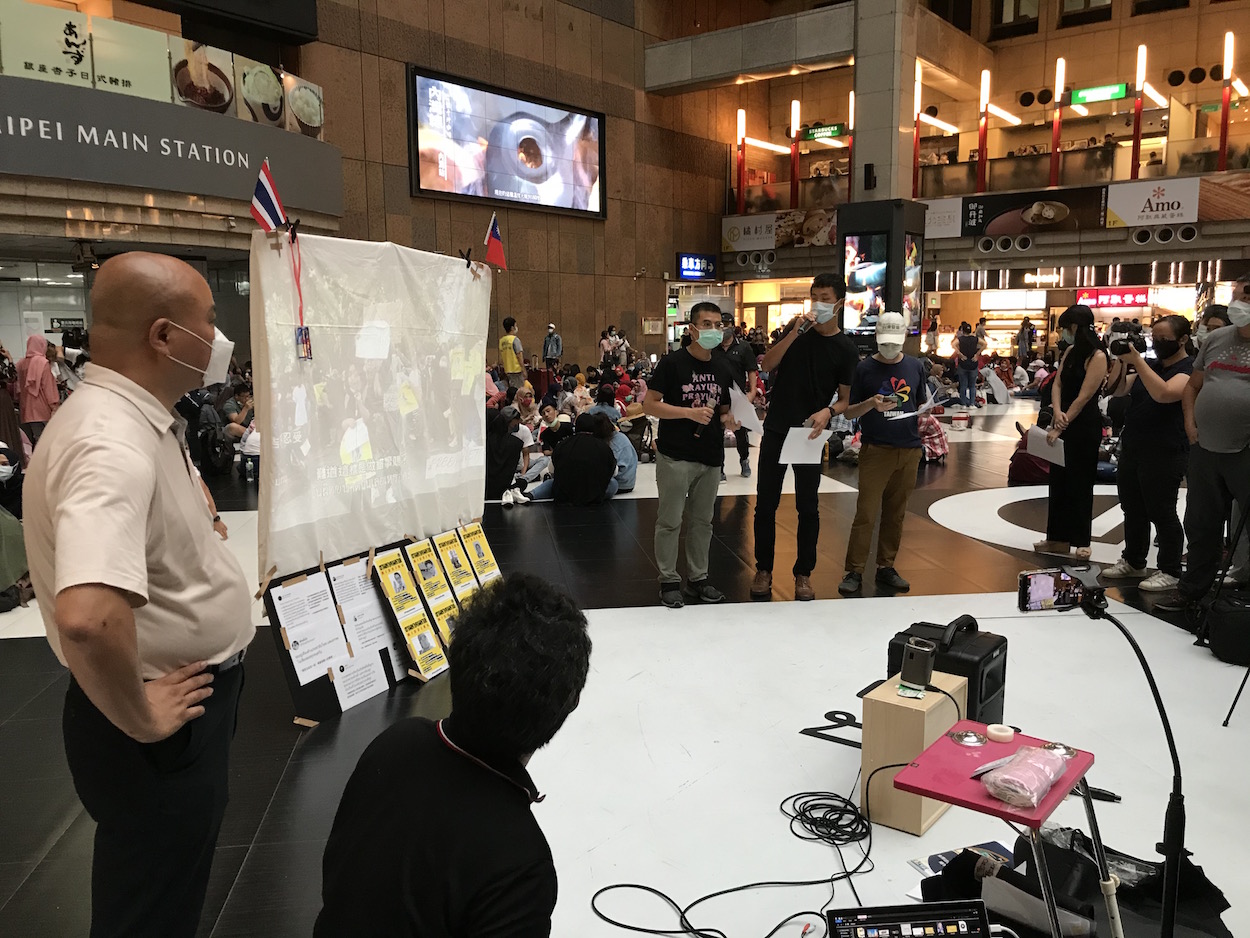 In their remarks, organizers reviewed the history of authoritarian repression in Thailand, beginning with Thailand failing to see a promised transition to a constitutional monarch in 1932 and rigged or invalidated elections that have taken place through Thai history, the most recent of which was in 2019. Organizers also discussed the unjust situation of how Thai citizens who express political criticisms abroad can face the threat of political persecution after returning to Thailand, making it difficult for some to return at all.

A number of speakers from Taiwanese groups also spoke, including members of the Green Party, human rights NGOs, and others. Speakers discussed the history of pro-democracy protests in Asia, such as demonstrations in Indonesia, Thailand, and Taiwan, drawing links between Taiwan’s past history of authoritarianism, and referencing the Taiwanese and Chinese diaspora in Thailand. Speakers also pointed out that the Taiwanese government had been taking the IDs of participants in past solidarity rallies, something that infringes on rights of political assembly in Taiwan, which people should legally have in Taiwan regardless of nationality. Moreover, it proves a danger that the Thai government could be monitoring participants in pro-democracy demonstrations in Taiwan, as the Thai government has a known history of monitoring overseas political dissidence. 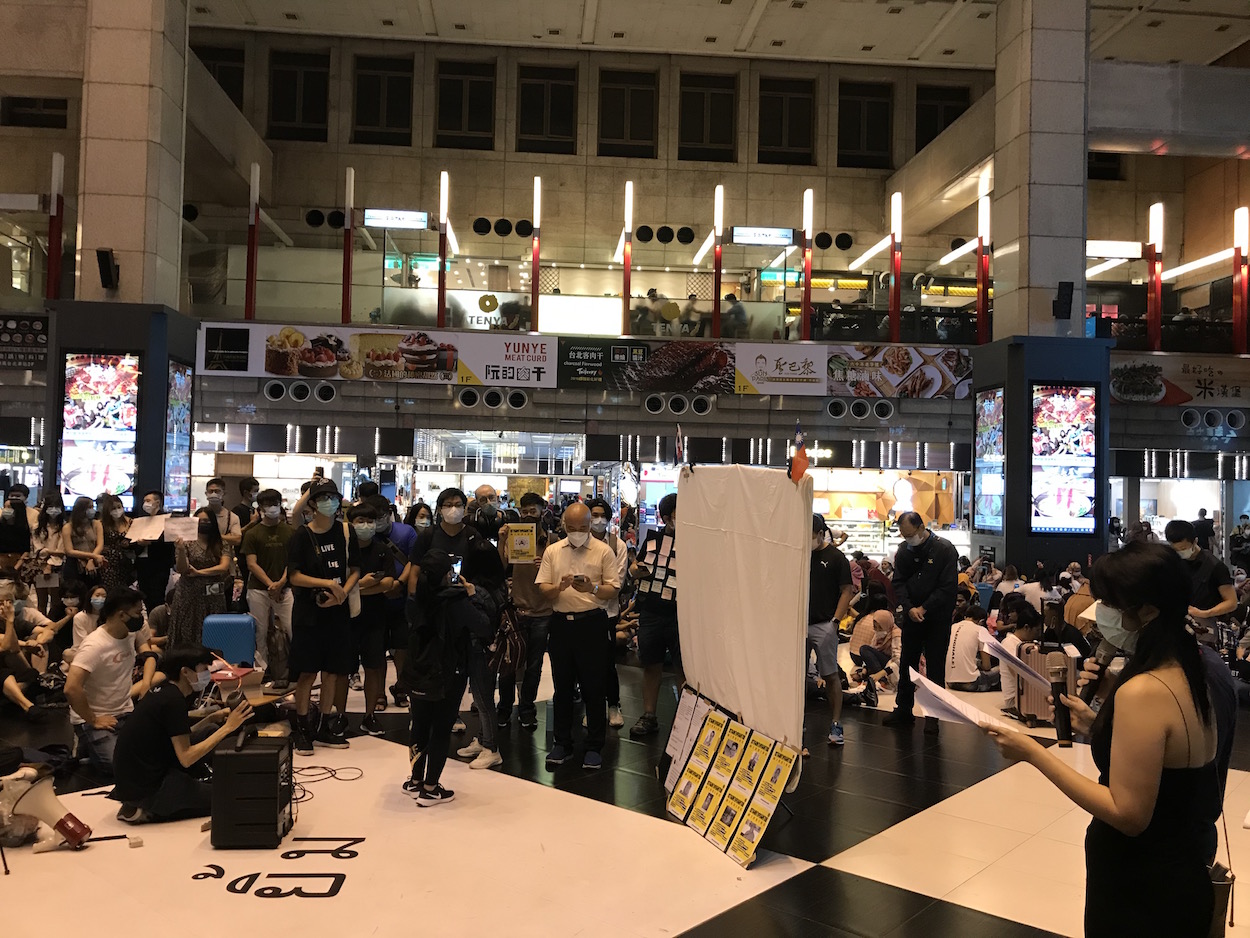 Other speakers at the rally included a speaker from Hong Kong, and Roy Ngerng, a Singaporean political dissident currently living in Taiwan. Both also drew connections between their respective political contexts and the situation in Thailand, such as regarding the brutal police repression against participants of pro-democracy protests in Hong Kong and the use of lawsuits by the Singaporean government to silence political criticism. Lee Jia-bao, the 22-year-old Chinese student currently seeking asylum in Taiwan after criticizing Xi Jinping during a live stream last year, was another speaker. Lee reemphasized his criticisms of Xi during his comments and led the crowd in chanting the protest slogan, “Restore Hong Kong, revolution of our times” (光復香港，時代革命). Indeed, a recurring theme of the rally was that many individuals faced the possibility of exile for their political criticisms.

At the end of the rally, organizers played a video message by Thai dissident and historian Pavin Chachavalpongpun, who has been living in exile in Japan after being stripped of his nationality for his criticisms of the Thai military government and faced physical attacks. Subsequently, organizers played an anthem of the protests that participants sang and clapped along to. The rally then closed with participants chanting, “Long live the people!”, and a group photo before dispersing.