WHAT EMERGES from a televised debate held on November 15th between New Power Party (NPP) chair Huang Kuo-chang and Tseng Pin-chieh, a professor at the College of Law at National Chung Cheng University, should be highly concerning to supporters of marriage equality in Taiwan. Namely, Tseng’s comments in the debate are highly indicative of what the aims of anti-gay groups in Taiwan are in their referendum against marriage equality, what their current strategy is, and what their endgame likely is.

The debate is one of the five public televised debates that the government is obligated to hold on each referendum question up for the vote in 2018 elections. That Huang was chosen to represent support marriage equality and other causes near and dear to Taiwanese civil society in these televised debates, such as opposition to nuclear energy, is a sign to what extent the causes that Taiwanese civil society pushes for have become yoked to the NPP. 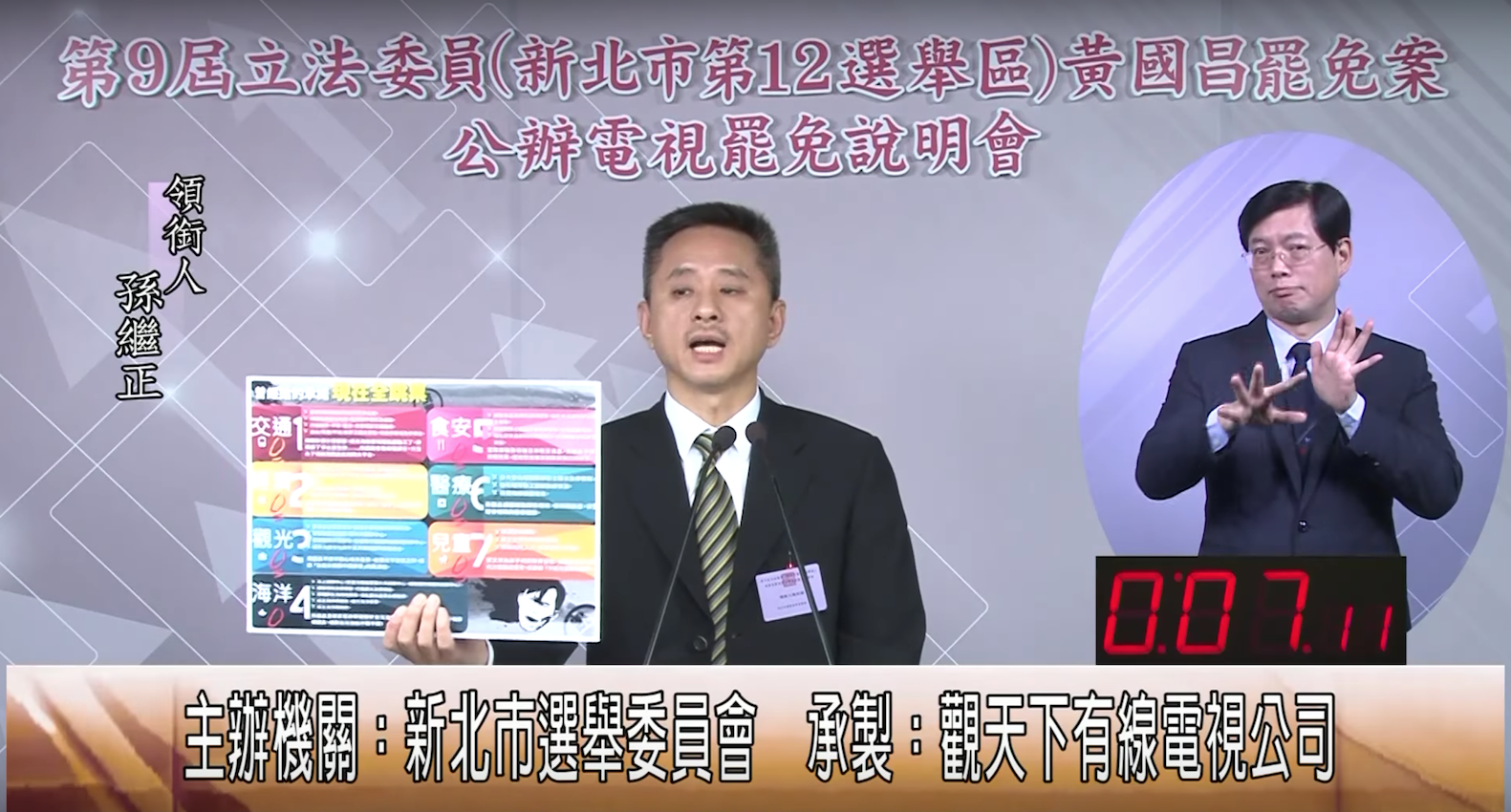 Anti-gay groups previously tried to rig these debates by having anti-gay advocates pose as supporters of gay marriage so that they could make marriage equality supporters look bad, something which the NPP had a key role in bringing to light. Likewise, this was not actually the first public debate that Huang has engaged in regarding marriage equality.

Last year, anti-gay groups organized a recall vote against Huang because of his consistent support of gay marriage, which Huang just barely survived. In the course of the recall campaign, Huang publicly debated the organizer of the recall vote, Sun Chi-cheng of the Greater Taipei Stability Power Alliance, and handily won. Apart from that Huang is a skilled debater, Sun proved incompetent as a public speaker, resorting to tabloid-like claims such as that the NPP advocates the legalization of all drugs and that Huang had been responsible for brainwashing the daughter of an anonymous opponent of marriage equality in the past. Sun also made numerous gaffes, such as closing with the statement, “Remember four characters on December 16th: ‘Recall Huang Kuo-Chang!’” (12月16日蓋下四個字「罷免黃國昌」) despite the fact that this is five characters (罷免黃國昌), not four.

But anti-gay groups have evidently learned to pick better representatives. Tseng Pin-chieh presented his arguments primarily in legal terms, claiming that he was simply explaining what was meant by Interpretation No. 748 of the Council of Grand Justices, which was seen as legalizing gay marriage by marriage equality advocates, but which Tseng attempted to claim does not allow for gay marriage and instead allows for a form of civil partnerships. Tseng did not attempt to make any discriminatory comments aimed at members of the LGBTQ community, but instead to claim that this was actually for their benefit and to protect their rights.

Huang would be a natural opponent for Tseng, seeing as Huang is a former law professor at Academia Sinica. The debate consisted of two rounds of comments by each speaker. Huang began by emphasizing that members of the LGBTQ community have historically been discriminated against and that defending them simply is the right thing to do, commenting that he has come into conflict with elders of the pan-Green camp because of this fact. Huang cited marriage is a right defended in the constitution, that trends in the international world are towards the legalization of marriage equality, and that Taiwan has achieved international recognition for legalizing marriage equality.

Huang commented that heterosexual people such as himself have discriminated against members of the LGBTQ community in the past and that it was irrational to think that heterosexual families would be threatened by members of the LGBTQ community being allowed to marry and start legally recognized families. Huang further stated that children raised by gay couples are no different from children raised by straight couples and that, while some claim that Taiwanese culture is not suited for gay marriage and is different from western countries in that regard, human rights are not divided by nationality. 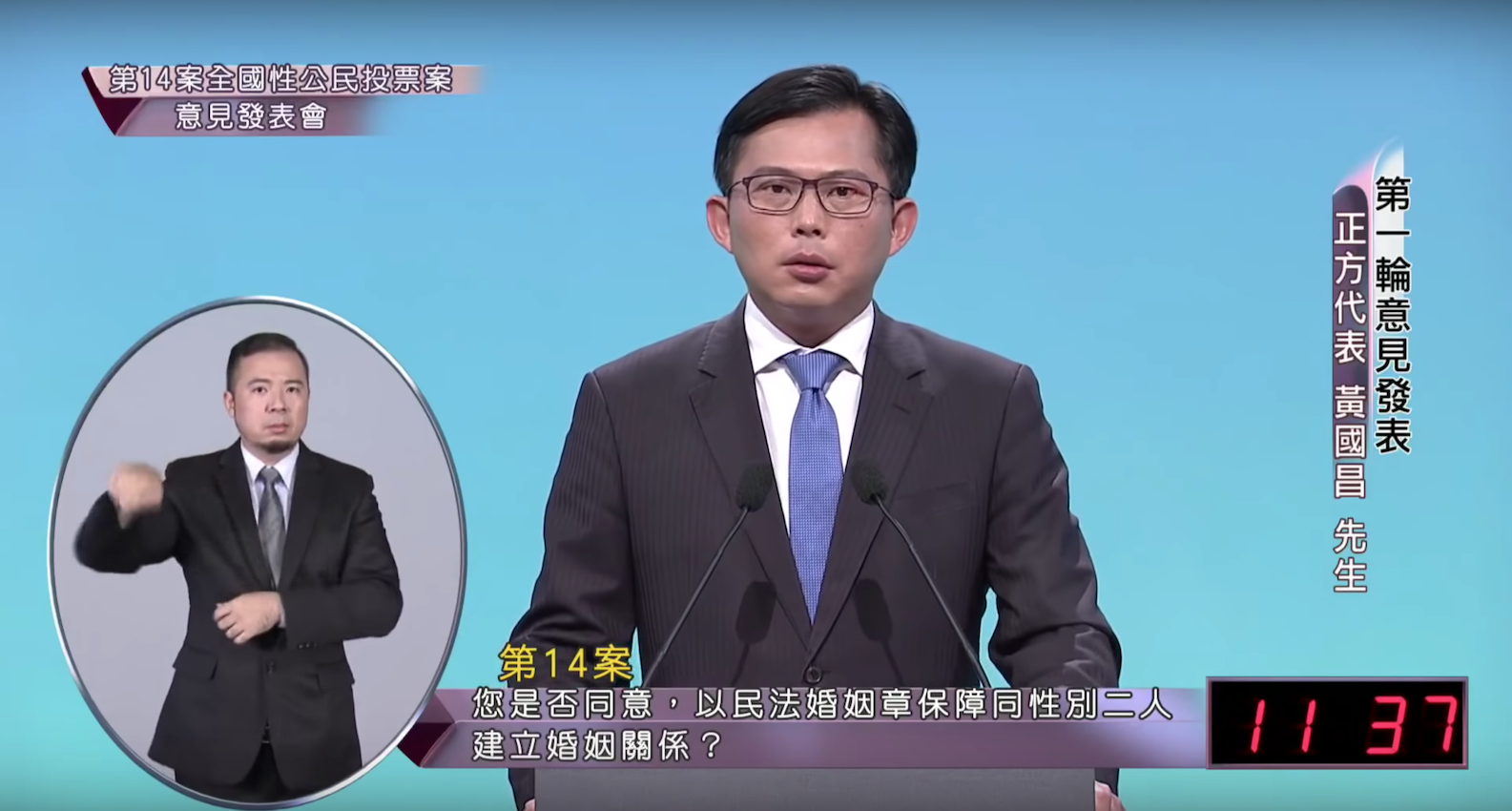 But evidently anti-gay groups have learned that it is a losing battle to try and paint members of the LGBQ community as morally degenerate, with Tseng stating in his opening that Interpretation No. 748 specifies that the definition of marriage is insufficient, meaning that further interpretation is needed to clarify the meaning of marriage. According to Tseng, relations between two same-sex individuals is outside the scope of marriage, and so specifying the definition of marriage as being between a man and a woman specifies more clearly what marriage is, so as to protect the rights of marriage.

So, according to Tseng, a new law is needed to describe the relationship which exists between same-sex couples or spouses. Tseng asserted that this returns to that laws must be specific for the national situation of each country and that this passing of a separate law is to describe an already existent social relation and to protect the rights of it.

Huang retorted in the opening of his second set of remarks that this was different what he had previously heard from Tseng in the Legislative Yuan, where Tseng stated that same-sex couples did not have the right to marriage protected under the constitution because they are unable to have children. However, this was already thrown out as an argument by the Council of Grand Justices because many heterosexual couples do not have children or are unable to have children and so one cannot tie the definition of marriage to reproductive capacity. 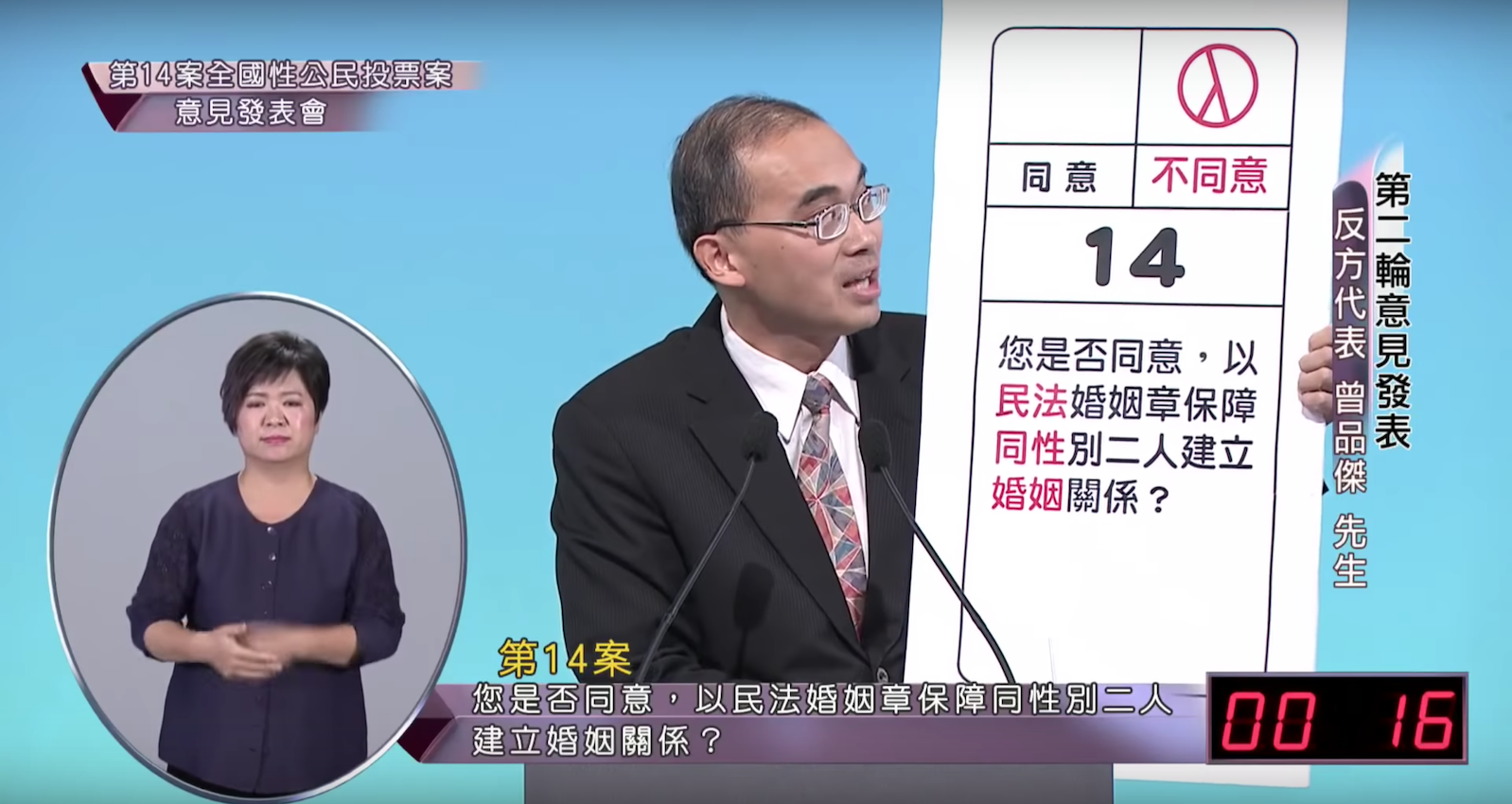 Likewise, Huang stated that Tseng himself stated that there could be a spousal relationship between same-sex couples and a spousal relationship is, in all forms and intents, equivalent to marriage in its meaningful contents. Adding new laws to specify same-sex relationships, then, would not clearly meet the full definition of marriage equality because it would not provide the same amount of protection to the rights already enjoyed by heterosexual couples. Huang also dismissed worries that this would change social relations, seeing as many family relations of the extended family exist, but are not legislated by law, and raised that only five articles would need to be changed for marriage equality.

In his response, Tseng claimed that Interpretation No. 748 was simply accommodating to existing social reality in which same-sex relationships do exist, and was a provision to protect a minority. Tseng attempted to draw a line between same-sex relationships, claiming that the admitting of a spouse, such as a wife, into their husband’s family, to be a process which occurred naturally in heterosexual families that did not occur with same-sex relationships.

According to Tseng, different institutions are needed for gay relationships and straight relationships, and gay relationships need institutions more fitting to them. The example Tseng raised was that if a male gay couple decided to have a child and one donated sperm to a surrogate mother, that woman would technically be the mother of the child by law, and not the couple. Tseng stated that with passing a separate law, gay couples could have rights such as making medical decisions, hospital visitation rights, or the rights to inherit property, but it simply is not appropriate to mechanistically apply the laws governing heterosexual marriage to same-sex marriages. This was where the debate concluded, with the debate ending after Tseng made his second statement. 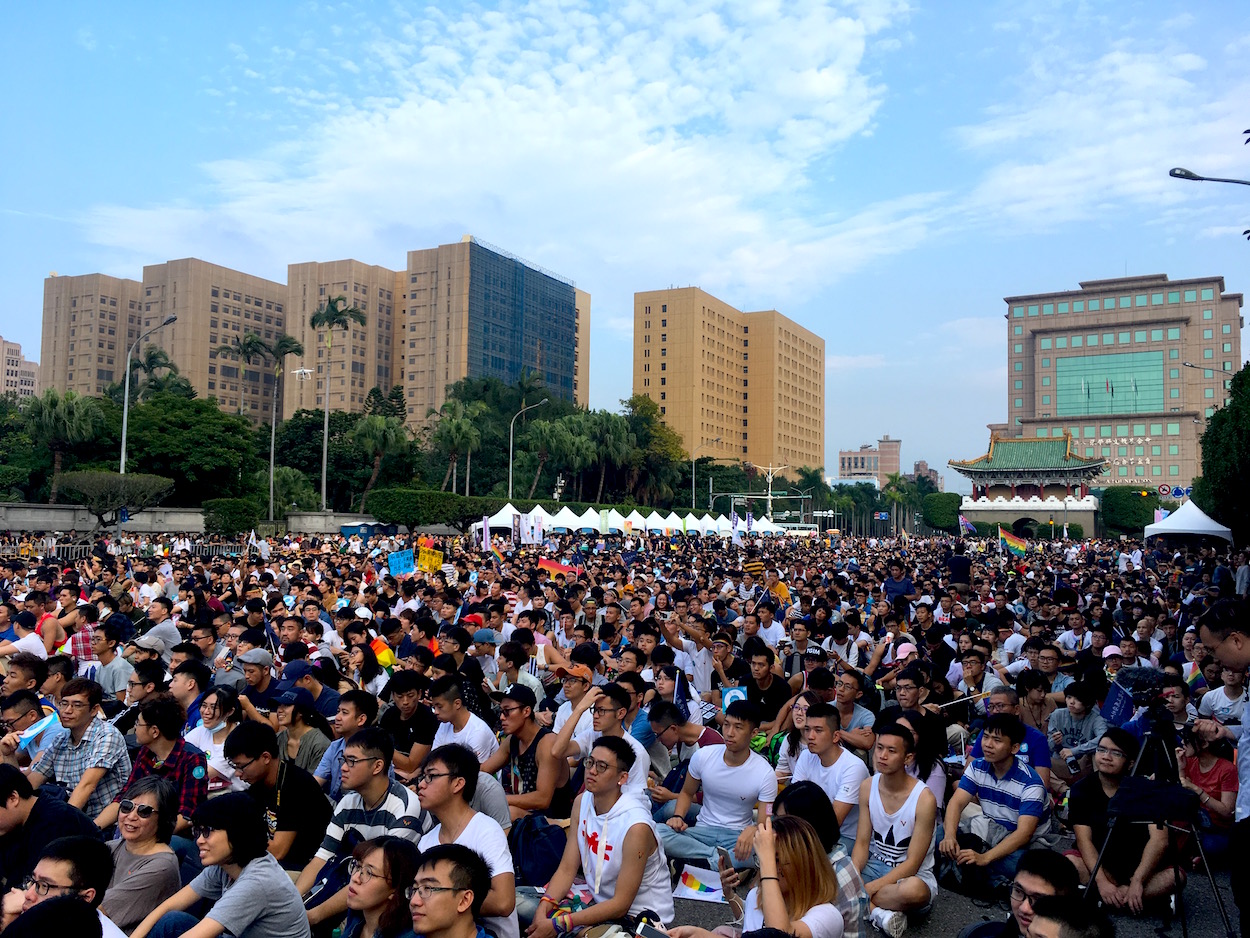 Unfortunately, Tseng’s comments point the fact that anti-gay groups intent on forcing through what would be a form of civil partnerships by means of pushing through a separate law for gay couples, rather than a form of full marriage equality which changes existing laws, see civil partnerships as differing in their meaningful content from marriage equality. Civil partnerships will have “rights” added to grant them rights that will be framed as “equivalent” to those enjoyed by heterosexual couples, such as the aforementioned examples of making medical decisions, hospital visitation rights, or the right inherited property.

Tseng’s comments suggest that these rights are to be added piecemeal. But this also raises the possibility that same-sex couples will be denied other rights, with the claim that these rights would not be suited for gay couples to enjoy. For example, as is already the case with some countries that legalized civil partnerships but not gay marriage, gay couples could be denied the right to adopt children with the argument that this will negatively affect the “normal” development of that child. This denial could occur in the negative rather than through taking the form of an outright ban, by simply not adding a right to legislation for civil partnership.

While opponents of marriage equality may not be making that argument at present and Tseng did not express such a view, it seems very likely based on Tseng’s comments that they are biding their time and keeping quiet about their eventual aims for now. It is probable that if marriage equality is voted down in the referendum, then anti-gay groups will seek to build on their leverage to argue subsequently that the form of civil partnership passed should deny certain rights to same-sex couples.

This would be a clever strategy. Anti-gay groups have clearly learned much from their failures in past years, seeing as in the past they directly criticized members of the LGBTQ as degenerate and harmful, but now they claim that their actions are actually to create more “fitting” and “appropriate” laws for the benefit of members of the LGBTQ community. 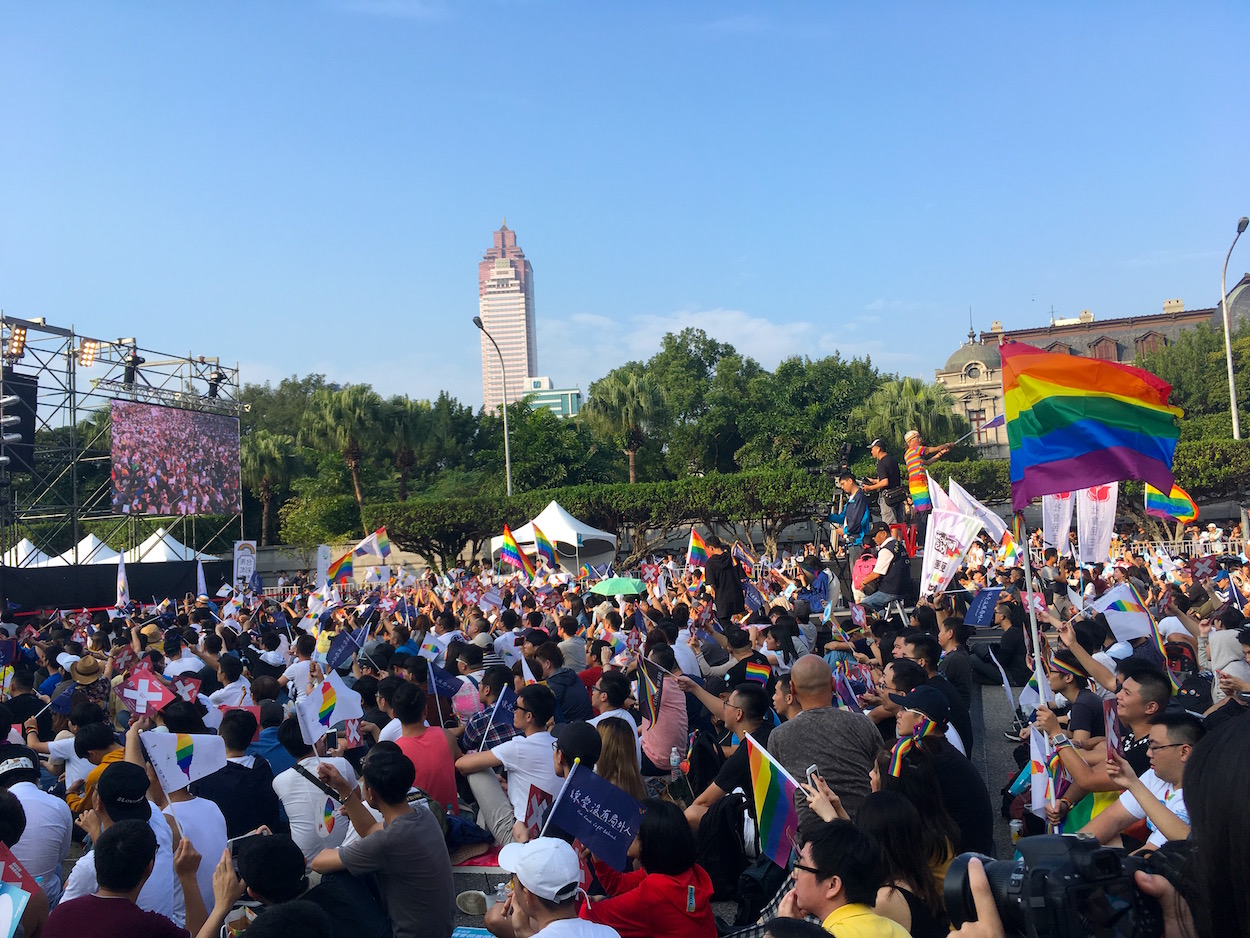 Indeed, adoption and childcare are likely to be issues on which anti-gay groups seek to deny gay couples rights. One can already observe that anti-gay groups are heavily afraid that the present curriculum in Taiwan which teaches LGBTQ-friendly education will encourage homosexuality. Voting on the current curriculum is another referendum question up for the vote next week. From this, one can conclude that anti-gay groups probably have a general fear that children raised by gay couples will similarly be guided towards homosexuality and this could easily lead them to try and deny gay couples the right to adopt under civil partnerships.

Yet at the same time, it would not be surprised if the argument for denying certain rights to same-sex couples under a civil partnership law is actually articulated in the name of protecting the rights of same-sex couples or defending them in some form. Tough times may be ahead for the marriage equality movement in Taiwan, then.