TAIWAN LGBT PRIDE 2017, the annual pride parade that takes place in Taipei yearly, took place for the fifteenth time this afternoon. According to organizers, 110,000 were in attendance. Following a rally at what was billed “Gay Pride Village” at Ketagalan Boulevard in front of the Presidential Office, the rally divided into three groups that marched through northern, western, and southern Taipei, before reconvening where they started.

The theme of this year’s pride parade was sexual education, with the tagline “Make Love, Not War—Sex Ed is the Way”. This theme was likely chosen in response to attempts in Taiwan of conservative, anti-gay groups largely of a Christian slant to target sexual education in Taiwan, the claim being that sexual education encourages and naturalizes unnatural ways of life such as homosexuality. In general, organizers and demonstrators called attention to the need for sexual education in Taiwan to raise cultural awareness and understanding not only for gay people, but for people who are bisexual, transgender, intersex, gender nonconforming, have disabilities, and others. 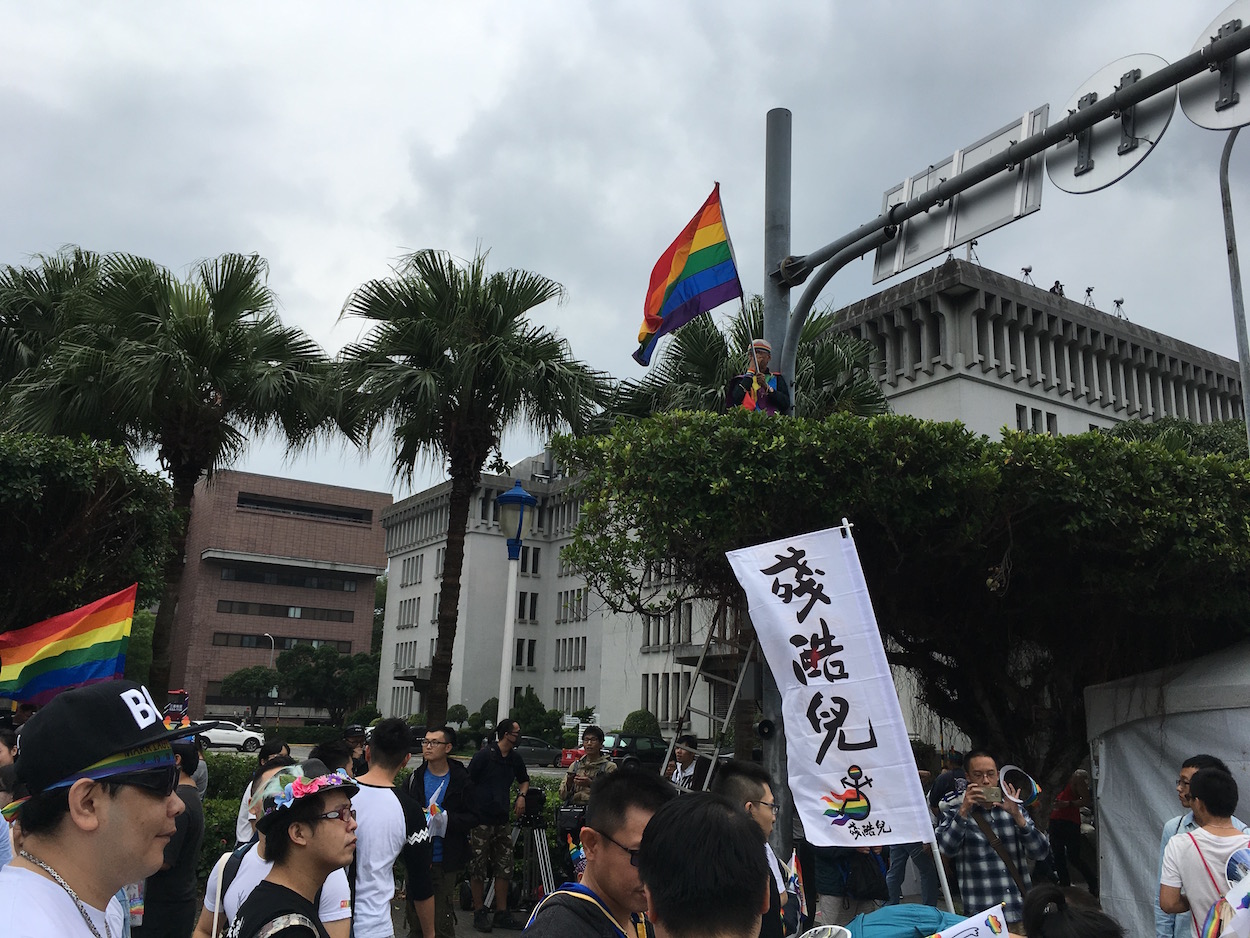 Organizers also called for the speedy legislation of marriage equality in Taiwan. Taiwan’s highest judicial body, the Council of Grand Justices, ruled in May of this year through constitutional interpretation that Taiwan’s Civil Code needed to be amended within two years to legalize same-sex marriage. If no action is taken, same-sex marriage will automatically become law.

However, Taiwan’s legislature, the Legislative Yuan, has in the past proved recalcitrant to calls for legalizing gay marriage, perhaps wanting to simply let the issue pass into law automatically. Despite that the Legislative Yuan is currently controlled by the DPP and current president Tsai Ing-Wen of the DPP called for gay marriage as part of her campaign platform, protests by anti-gay Christian groups allowed for backsliding and an eventual reversal on this campaign promise by the Legislative Yuan. 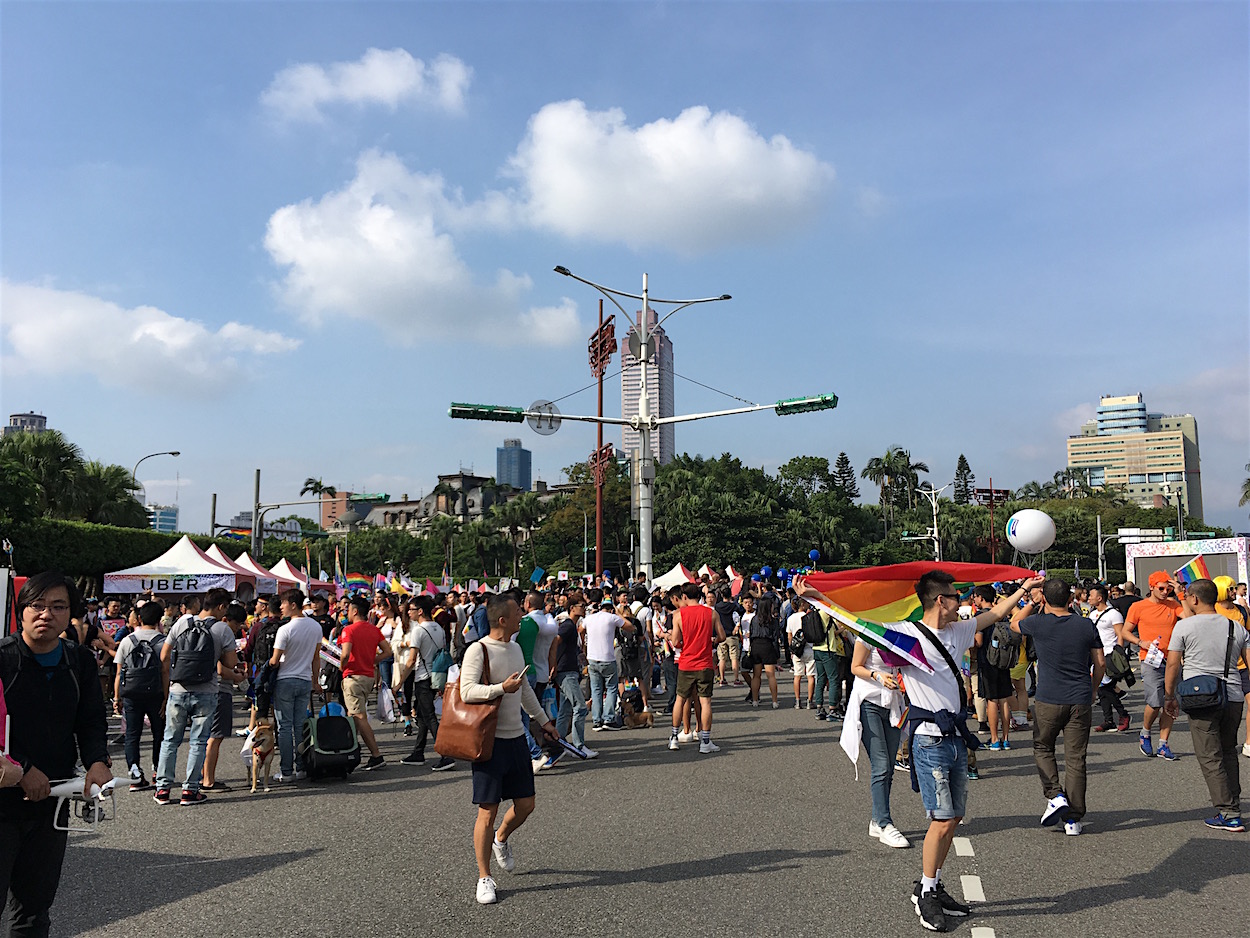 As elements of the DPP have strong ties to the Presbyterian Church, which is divided on the issue of gay marriage, very likely elements of the DPP were not on board with Tsai’s push for marriage equality to begin with given that their constituents may oppose gay marriage. The push for marriage equality was mostly an initiative of Tsai’s aimed at securing the youth vote from the progressive youth activists who had taken Taiwanese politics by storm after the 2014 Sunflower Movement. Nevertheless, facing opposition from within her own party, Tsai eventually dropped active advocacy for the issue, stating that she continues to support the issue, but stressing that she respects the due processes of law. Tsai made similar statements this year, emphasizing that the ruling of the Council of Grand Justices was legally binding, striking a different tenor altogether from past appeals by Tsai which were much more in the spirit of hope and change.

Although the ruling by the Council of Grand Justices theoretically would allow for DPP legislators to claim that they have no choice by to pass gay marriage into law because of the ruling and in that way deflect blame away from themselves onto the Council of Grand Justices, it seems that DPP legislators may not even want to do this. Chiu Tai-San, the Minister of Justice, was also a critic of gay marriage, claiming that this would lead to the breakdown of the social fabric and the destruction of traditions such as ancestor worship. 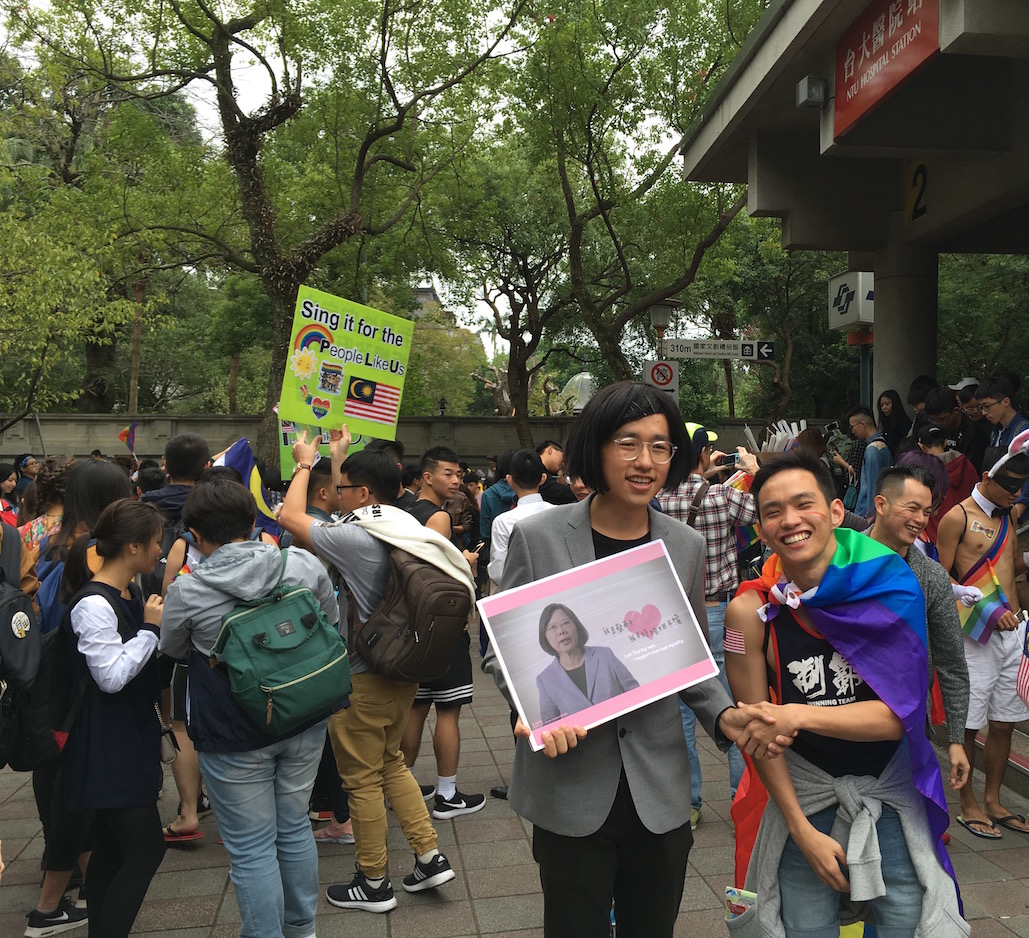 As such, participants in the pride parade today called on the Legislative Yuan to quickly take action on the issue. Likewise, as it is believed that the Executive Yuan intends to propose its own version of the gay marriage bill, in part because as the executive branch of government is more directly under the control of President Tsai, participants called on the Executive Yuan to quickly release its version of the bill. 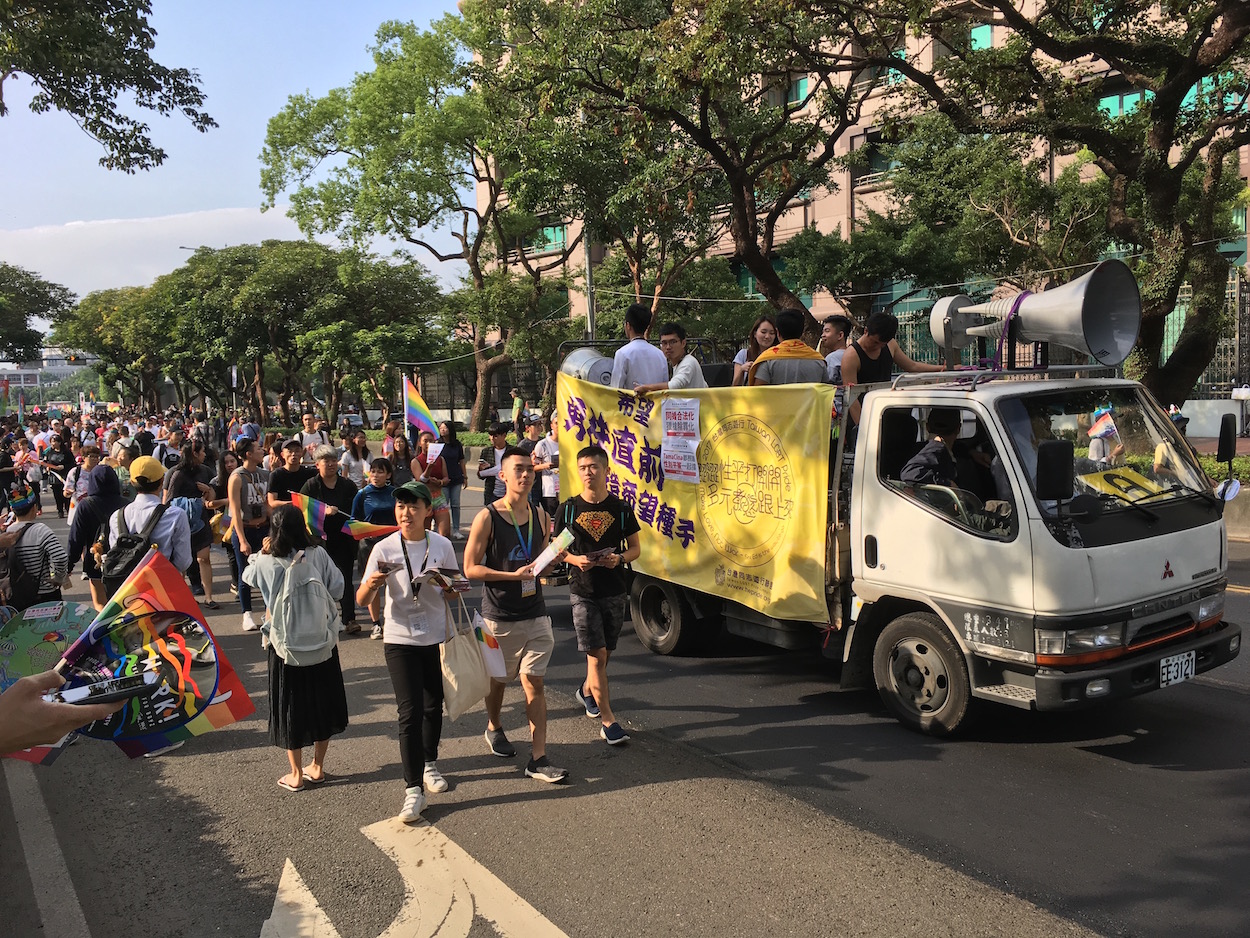 This would be an attempt to pass “separate but equal” laws regarding same-sex marriage in order to avoid redefining the family in the Civil Code, something that opponents of same-sex marriage claim would lead to the collapse of society in eventually paving the path for humans marrying non-human objects, such as windmills. Moreover, because of the similarities of the Taiwanese legal system with the German legal system, upon which much of the Taiwanese legal system is modeled, as with the German context, it is feared that despite the legalization of same-sex marriage, this would entail the denial of crucial rights to same-sex couples, such as the right to adoption.

Still other concerns exist as well, about whether the text of the interpretation could in fact prove limiting for sexual freedoms in Taiwan. In particular, members of the DPP seem to want Taiwan to get credit for being the “first country in Asia” to legalize gay marriage as a way to distinguish Taiwan from China while, at the same time, not actually wanting to legalize gay marriage. 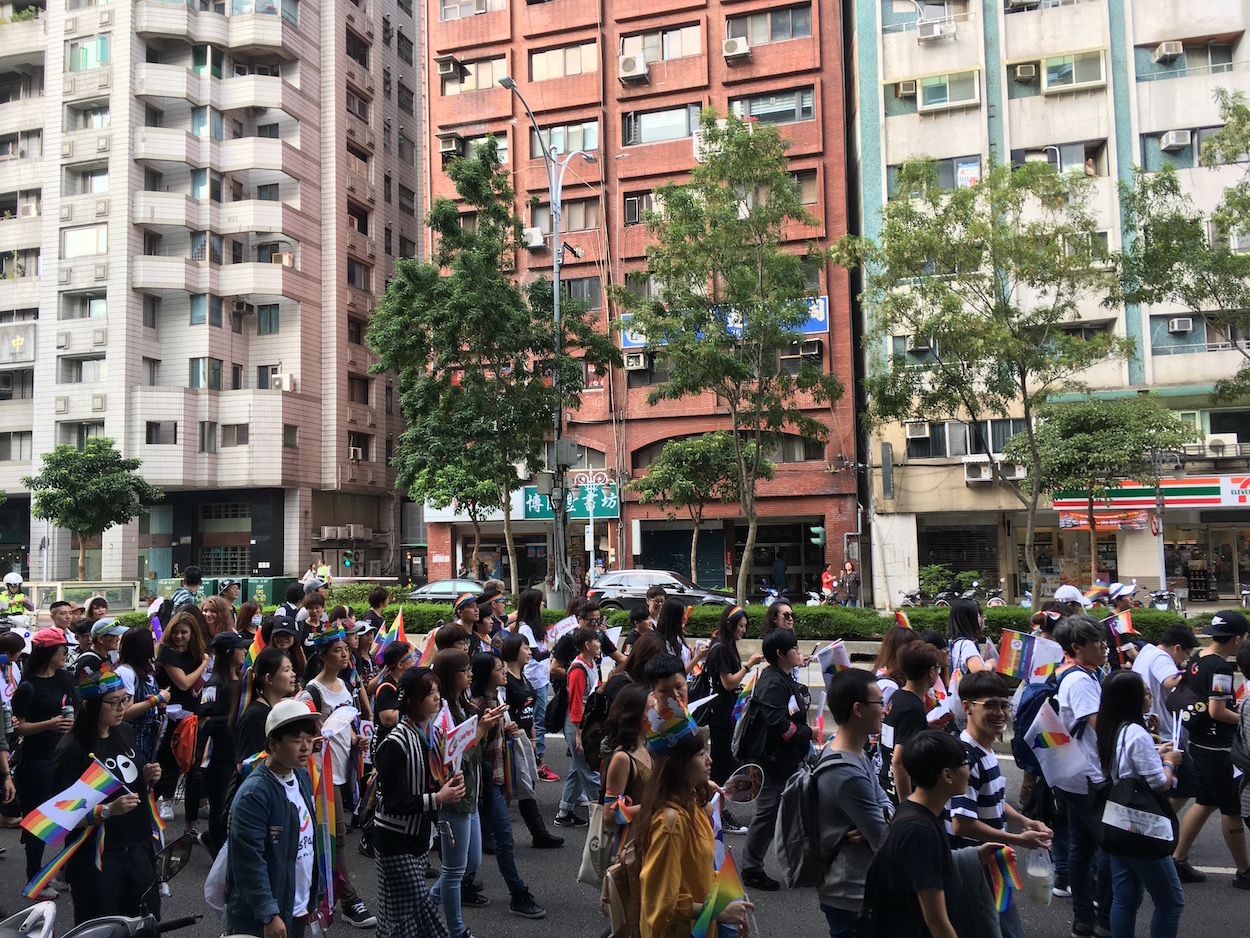 Participant groups today included a number of LGBTQ advocacy and cultural groups, such as the Tongzhi Hotline, the Taiwan International Queer Film Festival, the publication GagaOOLala, as well as corporate sponsor groups as Uber and Scoot. Activist groups as Amnesty International and post-Sunflower Movement “Third Force” parties such as the Social Democratic Party and New Power Party were also present.

Apart from members of the Social Democratic Party being among the only openly gay political candidates in Taiwan, past candidate Jennifer Lu has been a leading figure in the marriage equality movement. New Power Party chair and legislator Huang Kuo-Chang, who was present today at the parade, is also currently facing a recall vote organized by anti-gay groups because of his consistent support for marriage equality, although Huang has stated that he has no intention of backing down on the issue. 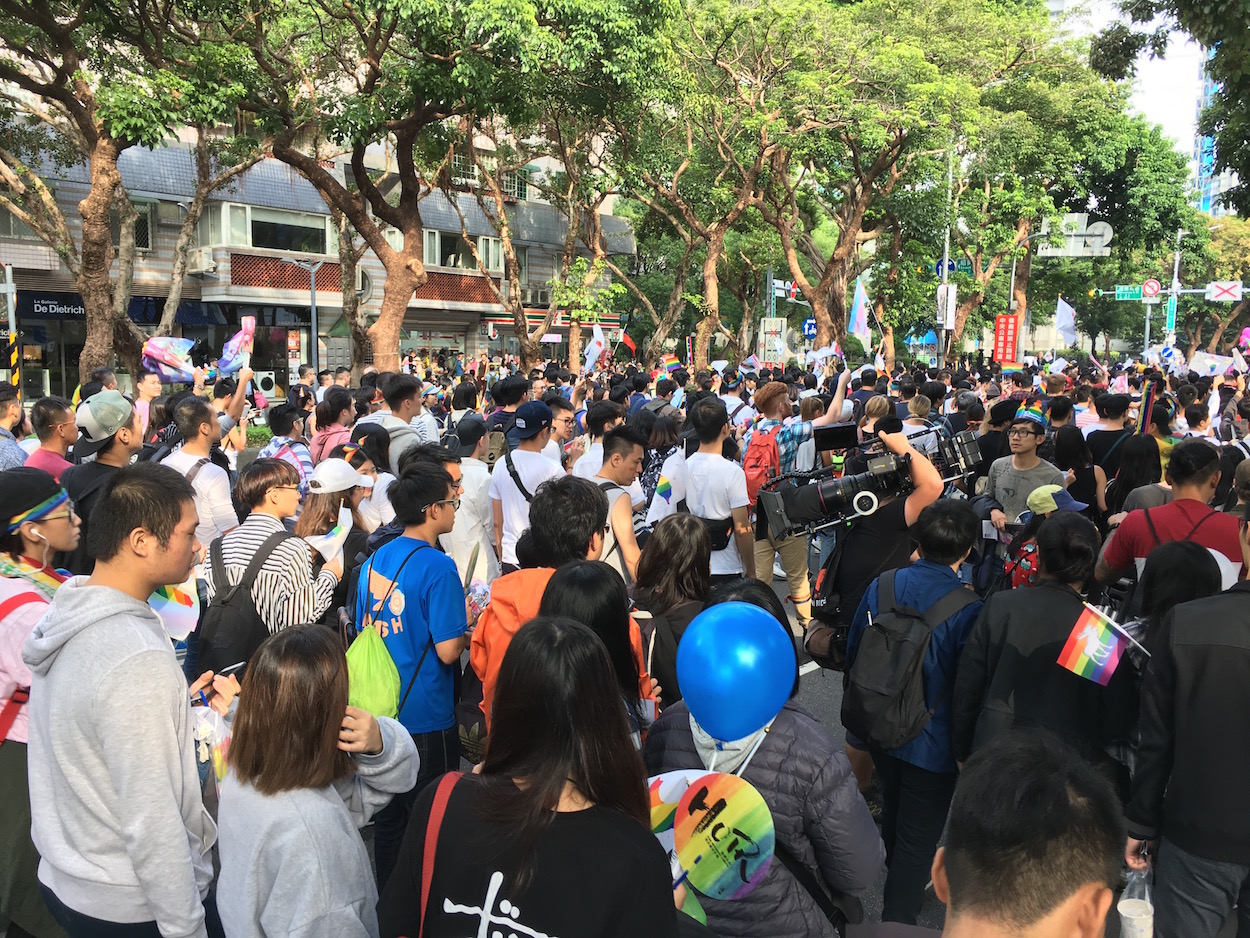 Seeing as Taiwanese media usually takes the results of local polls as a referendum on national issues, the results of the recall vote facing Huang will likely be read in Taiwanese media as an referendum on public support for not only the New Power Party and other “Third Force” parties, but for the issue of gay marriage as a whole. Indeed, it remains to be seen whether anti-gay groups will rally on the scale as they had in the past, seeing as despite that there were counter-protests today, they were minor and dwarfed by the pride parade.

In the meantime, it remains to keep up the fight for marriage equality. More mobilizations may be needed in order to demonstrate to recalcitrant politicians that the issue is one which has majority public support in Taiwan and that members of the LGBTQ community and their allies can and will continue to mobilize around the issue until they see satisfactory answers from the DPP government. And it bears keeping in mind for the LGBTQ community as a whole that marriage equality is far from the finish line, but that there will continue to be further struggles of great importance afterwards.