Lower turnout was expected for this year’s pride parade compared to last year, due to the ongoing COVID-19 pandemic. The pride parade last October, the first pride parade to take place since the legalization of gay marriage in May 2019, saw a record turnout of 200,000 participants, seeing attendance nearly doubling since 130,000 turnout in 2018. 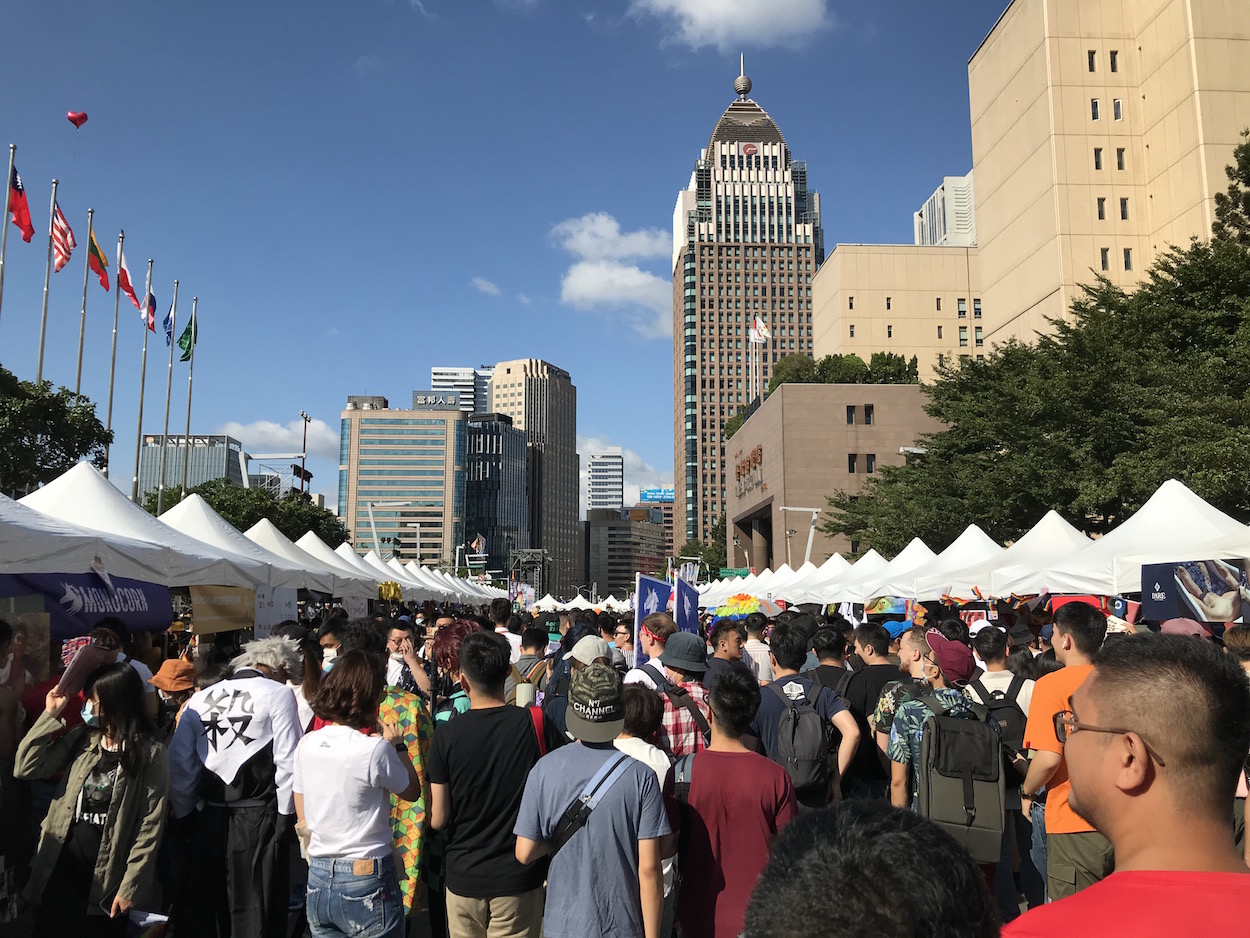 Taiwan’s pride parade is generally known as one of the earliest and largest pride parades in Asia, attracting a number of international visitors annually. However, travel from other countries is currently limited due to the ongoing COVID-19 pandemic. Despite this, with Taiwan having avoided the expansive lockdowns that the rest of the world has undergone, the pride parade this year is one of the few, if not the only full-scale pride parade able to take place currently. Taiwan recently marked 200 days since its last case of domestic transmission of COVID-19. And if the turnout was, in fact, 130,000 participants, turnout was comparable to 2018, reflecting that domestic participation in the pride parade has increased.

The parade route began with a market and fair in front of the Taipei City Hall, starting at 11:30 AM. Speeches and performances began at 1 PM, with comments by organizers of the successful push for marriage equality, groups that called for the lowering of the voting age, and a performance by DJ Didilong. MCs reflected on that this year’s pride parade marked the eighteenth year since pride parades began to be held in Taiwan, reflecting a coming of age for the event. 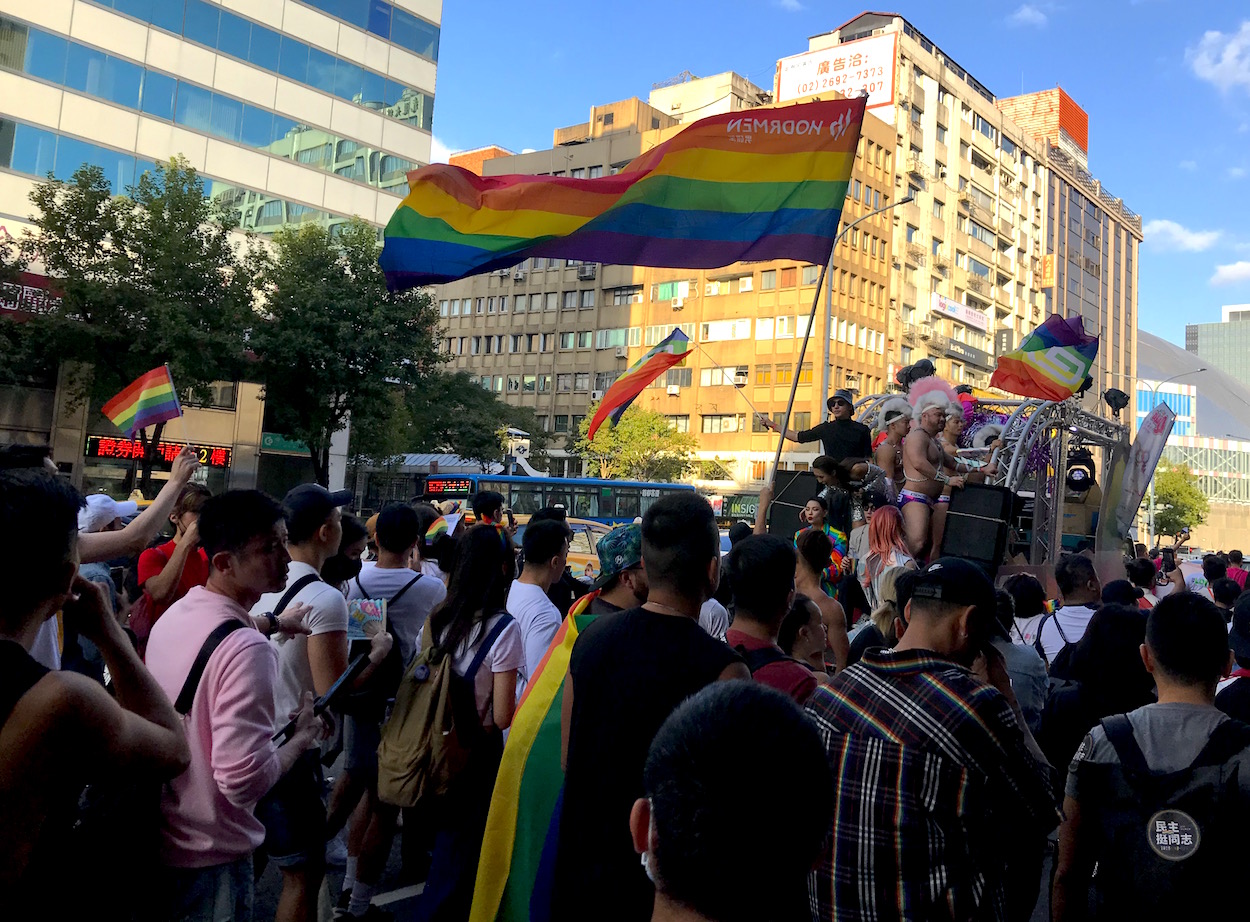 Subsequently, the march began at 2 PM, splitting into a northern route that proceeded along Zhongxiao East Road and a southern route that proceeded along Xinyi Road. Compared to last year, in which participants marched from City Hall to Ketagalan Boulevard, participants did not march across the whole of the city, instead marching westward to Dunhua South Road before turning back. The traffic situation was better than last year, which saw massive gridlock because the pride parade was confined to two lanes by the Taipei city government.

Participants groups included stalwarts of Taiwanese civil society, including groups such as Greenpeace, the Green Citizen Action Alliance, Covenants Watch, and key LGBTQ groups such as the Taiwan Tongzhi Hotline, Taiwan LGBT Family Rights Advocacy. Representatives of LGBTQ groups from Hong Kong, Macau, and other locations were present, as were campus-based LGBTQ student groups from National Taiwan University, National Cheng Chi University, and other universities, LGBTQ indigenous groups, Thai and Malaysian activist groups, and others. Political parties that were present included third parties, such as the NPP, Green Party, and TSP, as well as both of Taiwan’s major political parties, the DPP and KMT—though the latter raised some eyebrows regarding the presence of its youth section at the parade. 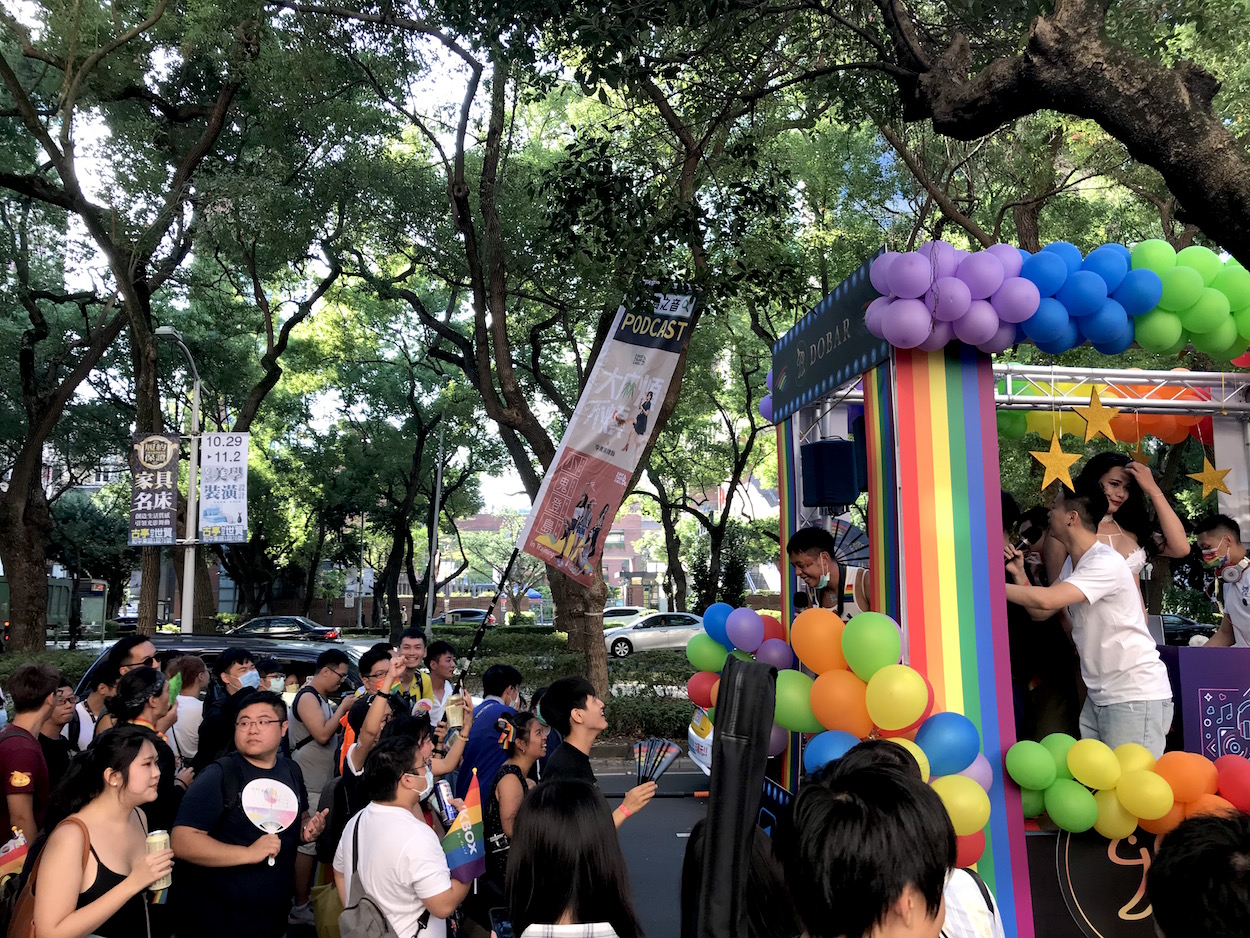 Corporations such as Gilead, Klook, KKBOX, Tinder, and local LGBTQ businesses such as G-Star, Locker Room, and Fairy, too, were present, sponsoring floats or distributing samples of their products. The presence of corporate and business groups has generally been on the rise over the past years of Taipei pride parades. 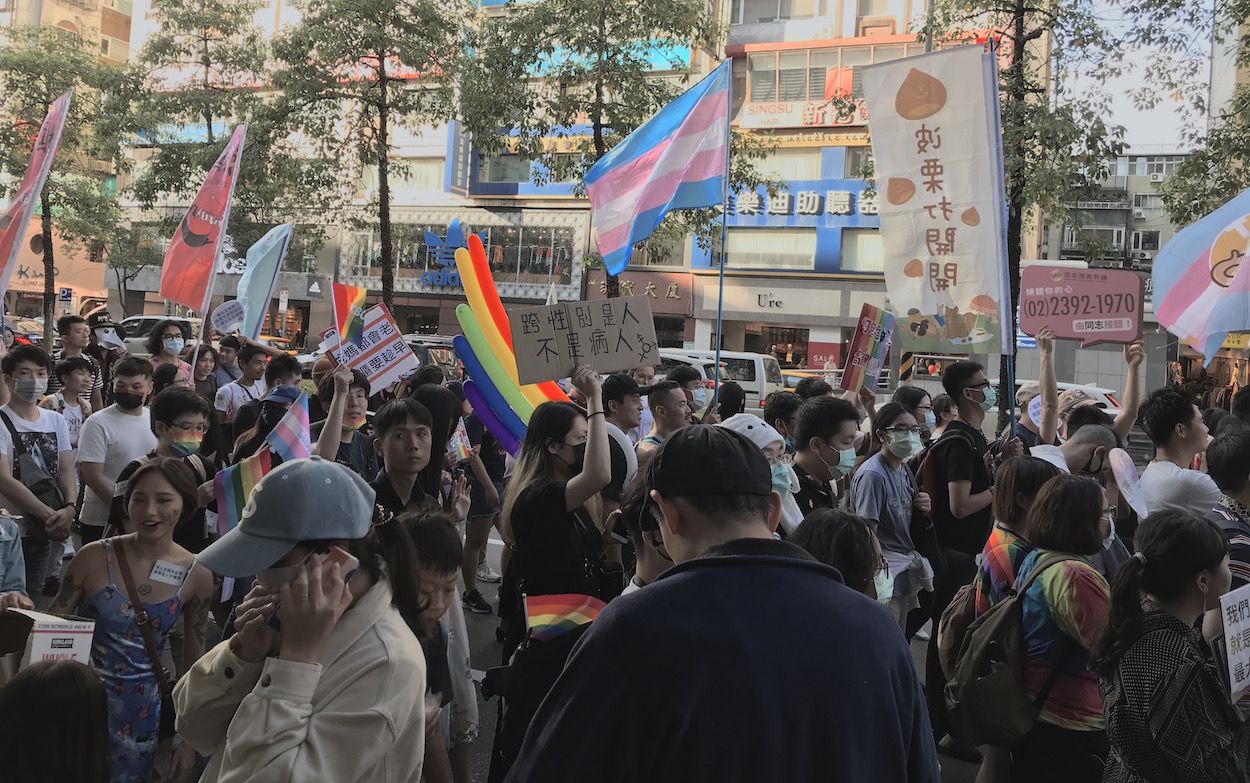 A campaign to call for changes to the current laws regarding transnational gay marriages in Taiwan, entitled SEA You Soon, began earlier this year. The issue proves a particularly salient one in the time of COVID-19 travel restrictions, something which has prevented many couples from seeing each other. It still remains to build up sufficient political willpower to push for further changes to laws regarding gay marriage.

As LGBTQ-friendly parents’ groups noted in comments today, education regarding LGBTQ issues is still lacking in Taiwan. Similarly, church groups such as the Tong-Kwang Lighthouse Presbyterian Church pointed to how many religious groups still are not accepting of gay marriage. 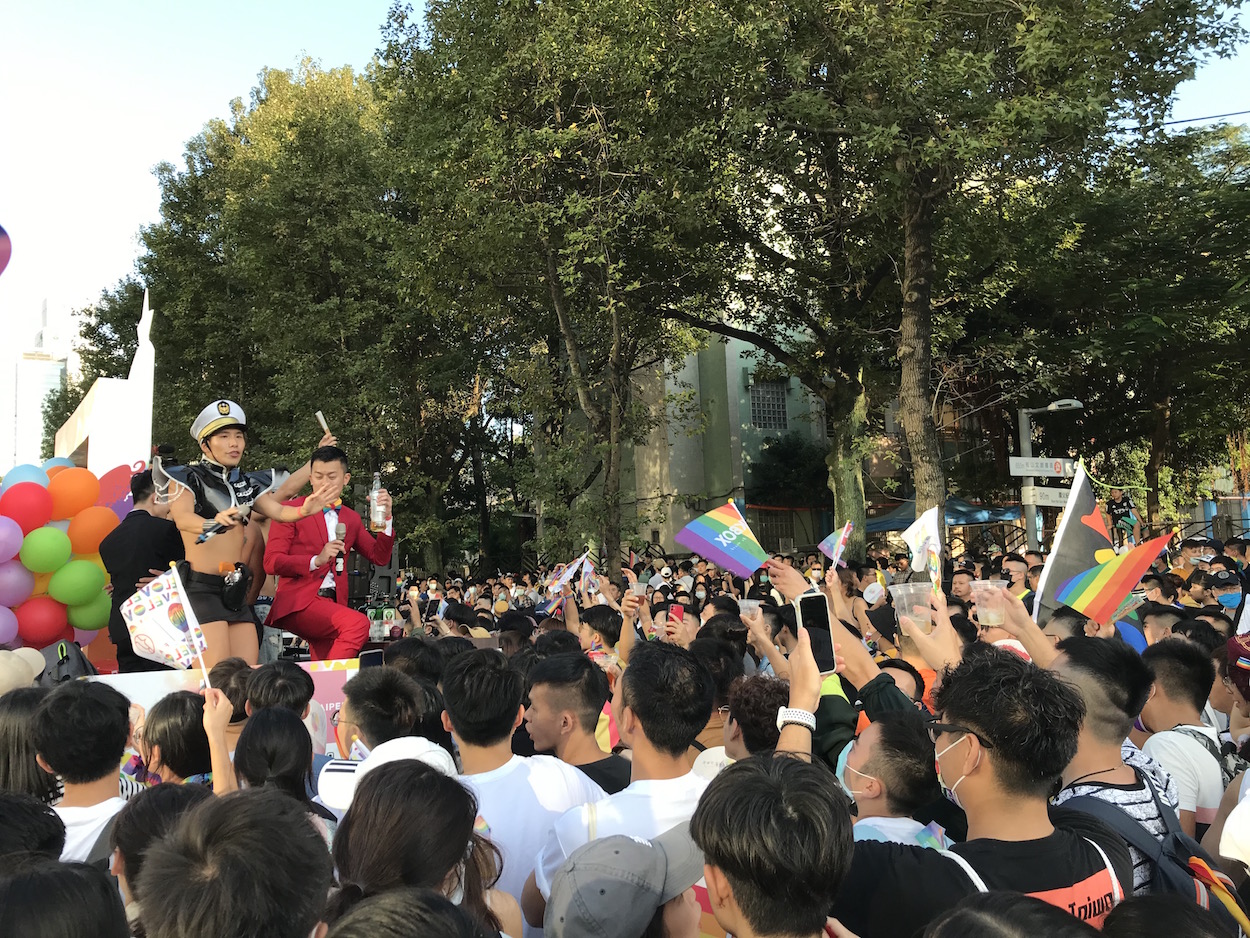 Notably, the annual National Prayer Breakfast was canceled for the first time in 20 years this week because of comments by President Tsai Ing-wen supportive of the LGBTQ community. This led religious groups to call for Tsai to refrain from attending the event, leading to its cancellation. Conservative Christian groups became organized in past years as a result of opposition to gay marriage and they continue to organize in the years since the legalization of gay marriage, to try to push for its repeal, or to try and institute their conservative brand of sexual education in Taiwanese schools.

Increased awareness has gone to transgender individuals in the past few years, with the second annual Trans March also held in Taipei yesterday. Around 1,000 were in attendance at the Trans March, which began at the Cinema Park in Ximending at 7 PM, and marched around Ximending before returning to the park and finishing at 10 PM. Similarly, the Trans March called attention to lacking attention to trans issues, inclusive of inadequate resources and social education, and comments were made by representatives of nonbinary and asexual organizations, calling attention to broader issues of diversity in sexual orientation and gender identities. 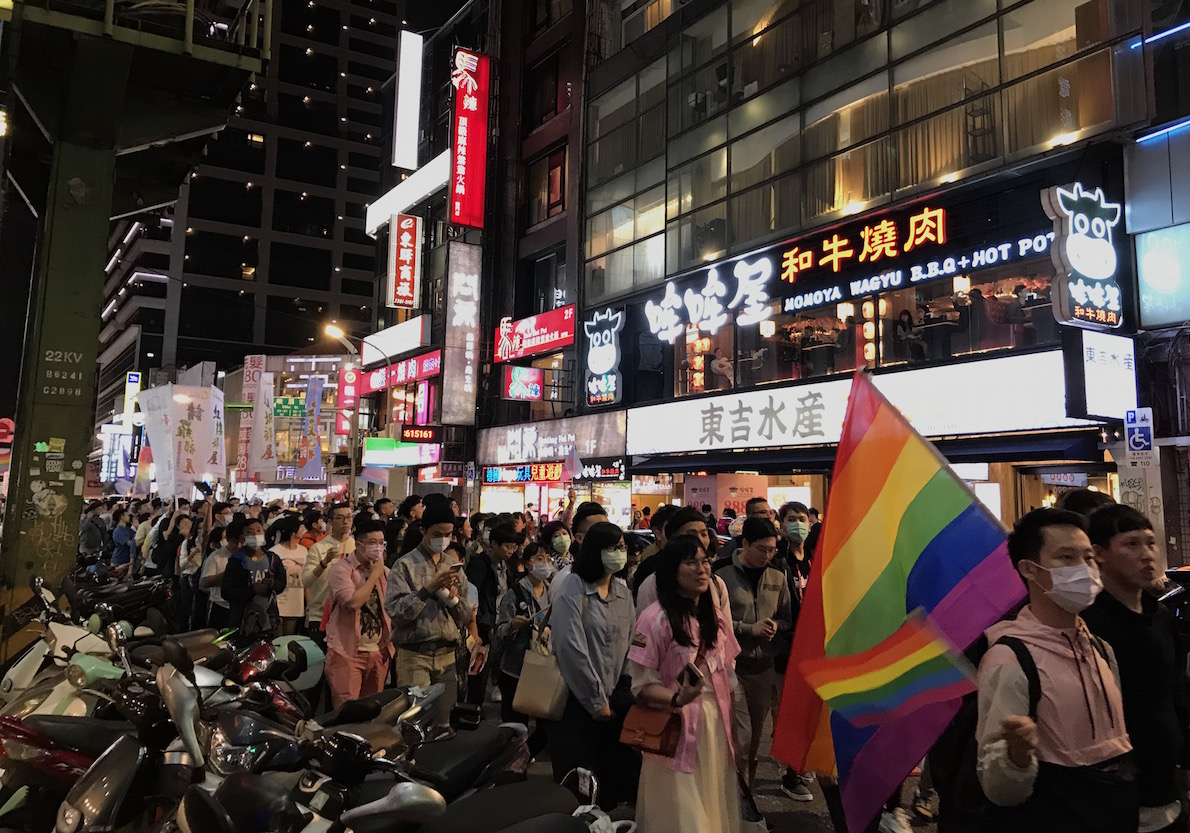 One expects pride parades in Taiwan to grow in size in the coming years, then, with this year’s march still seeing a sizable turnout despite travel restrictions. To this extent, one also notes that pride parades held outside of Taipei have also grown in size over the past few years, inclusive of pride parades held in Taoyuan, Hualien, and other cities, some of which only began holding pride parades recently. One expects this trend to continue as well.