What Will Be Up For Referendum In This Year’s Taiwanese Elections?

A TOTAL OF ten referendum questions are up for the vote in local elections at the end of this month, during which a nationwide referendum will also be held regarding these ten questions. Some confusion remains about how voters will tackle these questions, seeing as multiple sets of questions about the same issue will be present on the ballot.

Three questions were pushed for by the Coalition for the Happiness of Our Next Generation, an anti-gay marriage group primarily composed of Christian groups. One question asks whether marriage should be defined as between a man and a woman (你是否同意民法婚姻規定應限定在一男一女的結合？). The second question asks whether the Civil Code guarantees the right of long-term shared life of two people of the same gender in a form other than marriage (你是否同意以民法婚姻規定以外之其他形式來保障同性別二人經營永久共同生活的權益?). The third question asks whether elementary-school and middle-school education about homosexuality, as implementing the Gender Equity Education Act (你是否同意在國民教育階段內（國中及國小），教育部及各級學校不應對學生實施性別平等教育法施行細則所定之同志教育？). 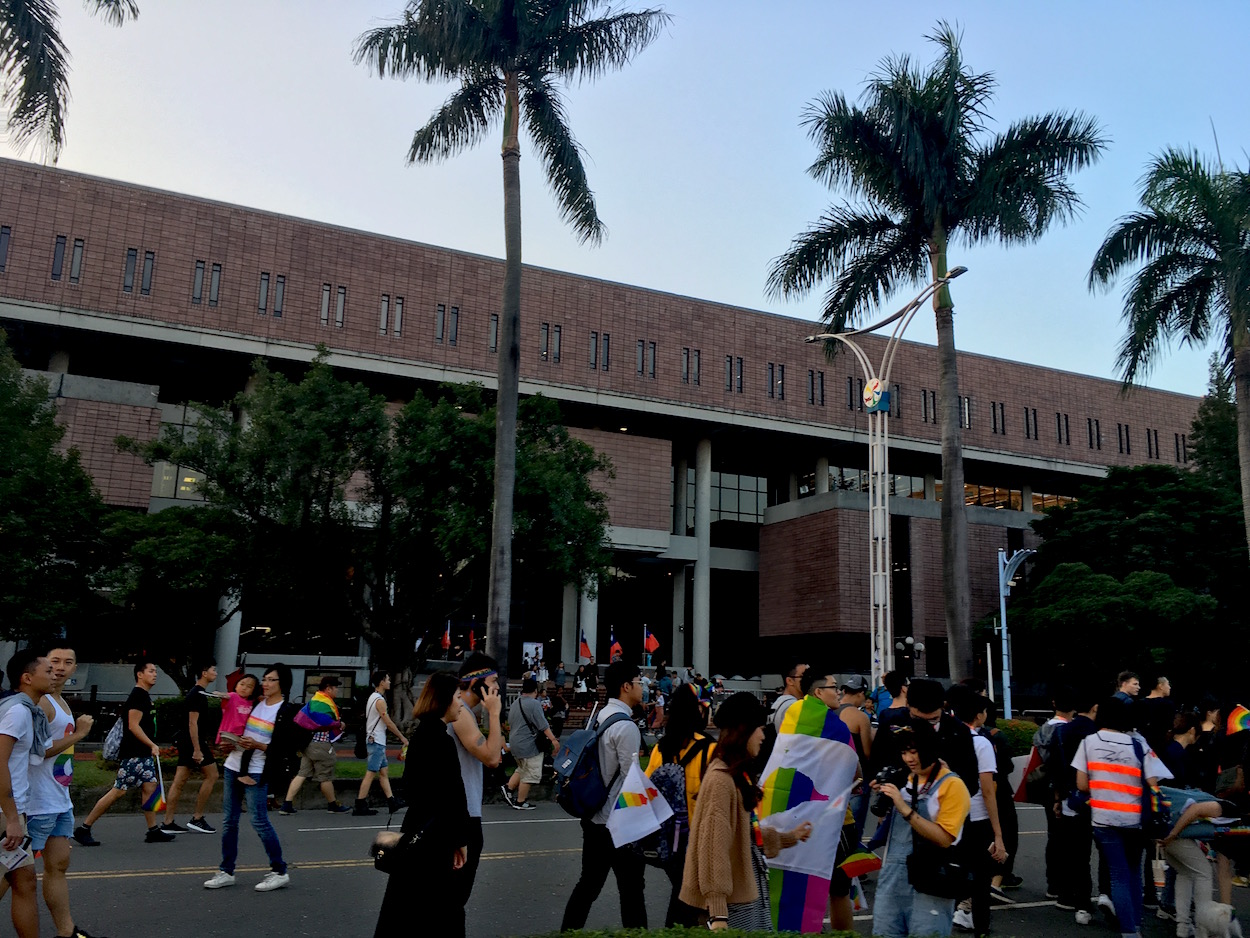 Two questions were pushed for by the Marriage Equality Alliance, an alliance of LGBTQ advocacy groups pushing for marriage equality. The first question asks whether one agrees if the Civil Code guarantees the right of two people of the same gender to establish relations of marriage (您是否同意，以民法婚姻章保障同性別二人建立婚姻關係？). The second question asks whether one agrees that the Gender Equity Education Act should be implemented at all stages of national education in order to carry out education about emotional education, sexual education, and homosexuality (您是否同意，以「性別平等教育法」明定在國民教育各階段內實施性別平等教育，且內容應涵蓋情感教育、性教育、同志教育等課程？).

In particular, three sets of questions exist pertaining to the issue of gay marriage, two of which were pushed by anti-gay marriage groups, and one by pro-gay marriage groups. The difference between the phrasing of this question and the phrasing of the question on gay marriage pushed for by the Marriage Equality Alliance is that the set of questions pushed for by the Coalition for the Happiness of Our Next Generation pushes for any possible legalization of gay marriage to be done through adding an amendment to the Civil Code, not through changing the existing language of it. Two conflicting sets of questions exist about teaching about homosexuality as part of the national education.

Two questions of these questions are directly related to nuclear energy. One question, pushed for by Huang Shiqiu, the convenor of Nuclear Mythbusters, asks whether voters agree that Article 95, Item 1 of the Electricity Act, which calls for Taiwan to be free of nuclear power by 2025, should be scrapped (您是否同意：廢除電業法第95條第1項，即廢除「核能發電設備應於中華民國一百十四年以前，全部停止運轉」之條文？). Another question, pushed for by the KMT, asks whether Taiwan should maintain its current ban on food from areas of Japan affected by radiation from the Fukushima disaster (你是否同意政府維持禁止開放日本福島311核災相關地區，包括福島與周遭4縣市（茨城、櫪木、群馬、千葉）等地區農產品及食品進口？).

In particular, the KMT has been a major force in pushing for these two referendum questions because it wishes to attack the DPP as failing to satisfy Taiwan’s energy needs because of irrational fear of nuclear energy. At the same time, as the Abe administration in Japan has made allowing food imports from Fukushima-affected areas to be a major precondition of better relations with Taiwan, the KMT wishes to sabotage attempts by the DPP to build stronger military and political ties between Taiwan and Japan to counter China, while also depicting the DPP as playing irrational risks with Taiwan’s food safety—never mind that opposing imports of food from radiation-affected areas seems somewhat contradictory to calling for nuclear restarts in Taiwan at the same time.

Two further questions pushed for by the KMT, then, also raise environmental concerns regarding air pollution and Taiwan’s energy needs. One question, on opposing air pollution, asks voters whether they agree that Taiwan should reduce the amount of power it uses from thermal power plants by 1% per year (你是否同意以「平均每年至少降低1%」之方式逐年降低火力發電廠發電量？), as a means of combating air pollution. The second question calls for voting on whether voters agree or not with energy policy to stop the construction of coal-fired power plants or generators, including the Shenao coal-fired power plant until recently under construction (您是否同意確立「停止新建、擴建任何燃煤發電廠或發電機組（包括深澳電廠擴建）」之能源政策？).

Calls for less reliance on thermal power plants and coal-fired power plants are in line with the KMT’s calls to focus on nuclear power, which is less polluting of the air, but could lead to similar issues in seismically active Taiwan as occurred with the 2011 Fukushima disaster. However, perhaps because of pressure from this referendum question, the Tsai administration has already ceased construction of the Shenao coal-fired power plant.

Many questions remain about how the referendum will be carried out, particularly because this will be the first set of referendums held in Taiwan after changes to the Referendum Act in December 2017. For one, that multiple questions exist on the same issue could be confusing to voters, particularly as the decision was made to give each question its own page, rather than putting them all on a single page—something that has been criticized by experts. Likewise, it remains to be seen what will happen when there is voting on a policy that the government has already backed away from, such as the Shenao power plant, and what will take place when a local issue such as the Shenao power plant, becomes the object of a national referendum. And, in the end, it could always be that as the body with executive power, the government decides to drag its feet on implementing certain referendum results it does not like.