A DEMONSTRATION was held outside the Central Election Commission this morning by LGBTQ groups to demonstrate the Central Election Commission passing a referendum pushed for by anti-gay groups seeking to override the Council of Grand Justice’s ruling in May of last year that called for the legalization of equal marriage rights for same-sex couples within two years. Several hundred were in attendance, although the rally was organized on short notice and began at 9:30 AM, ending at around 11:30 AM, and despite the strong sun. 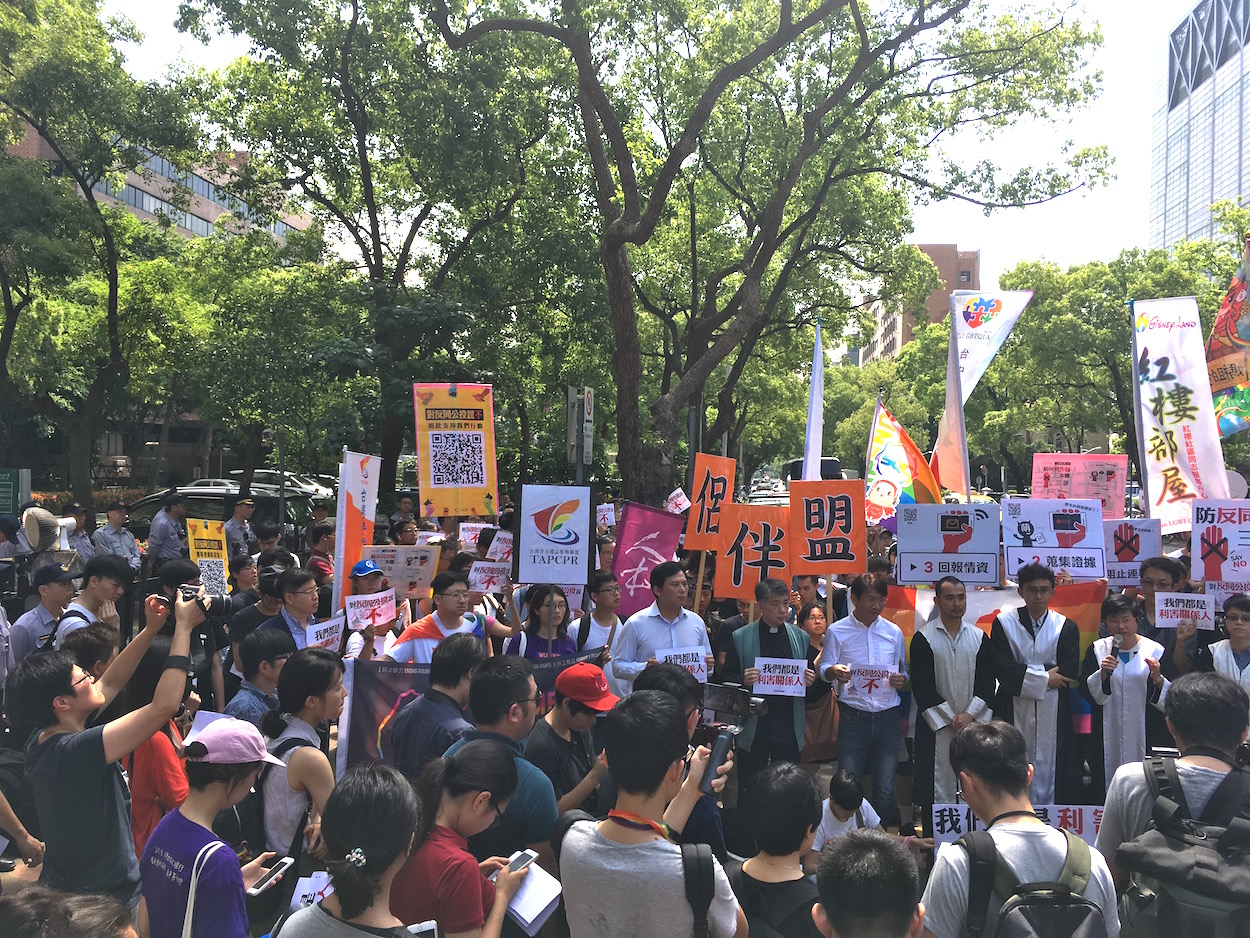 The rally appears to have originally been planned by last for an hour and a half, as more of a press conference than a rally, but the large showing by LGBTQ groups and their allies led to the extension of the rally to two hours. The primary organizer of the rally was the Taiwan Alliance to Promote Civil Partnership Rights, but LGBTQ groups from all around Taiwan, high school and college-level advocacy organizations, Buddhist and Christian religious representatives, pro-marriage equality lawyers, members of the Women’s March Taiwan, and other organizations were present.

Among the speakers were marriage equality pioneer Chi Chia-Wei, whose legal case led to the ruling by the Council of Grand Justices, Huang Kuo-Chang and Hsu Yung-Ming of the New Power Party, Taiwan Association for Human Rights secretary-general Chiu Eeling, Chen Fang-Ming, former political exile, researcher into the history of Taiwanese leftism, and former head of the DPP’s Propaganda Department, as well as others. 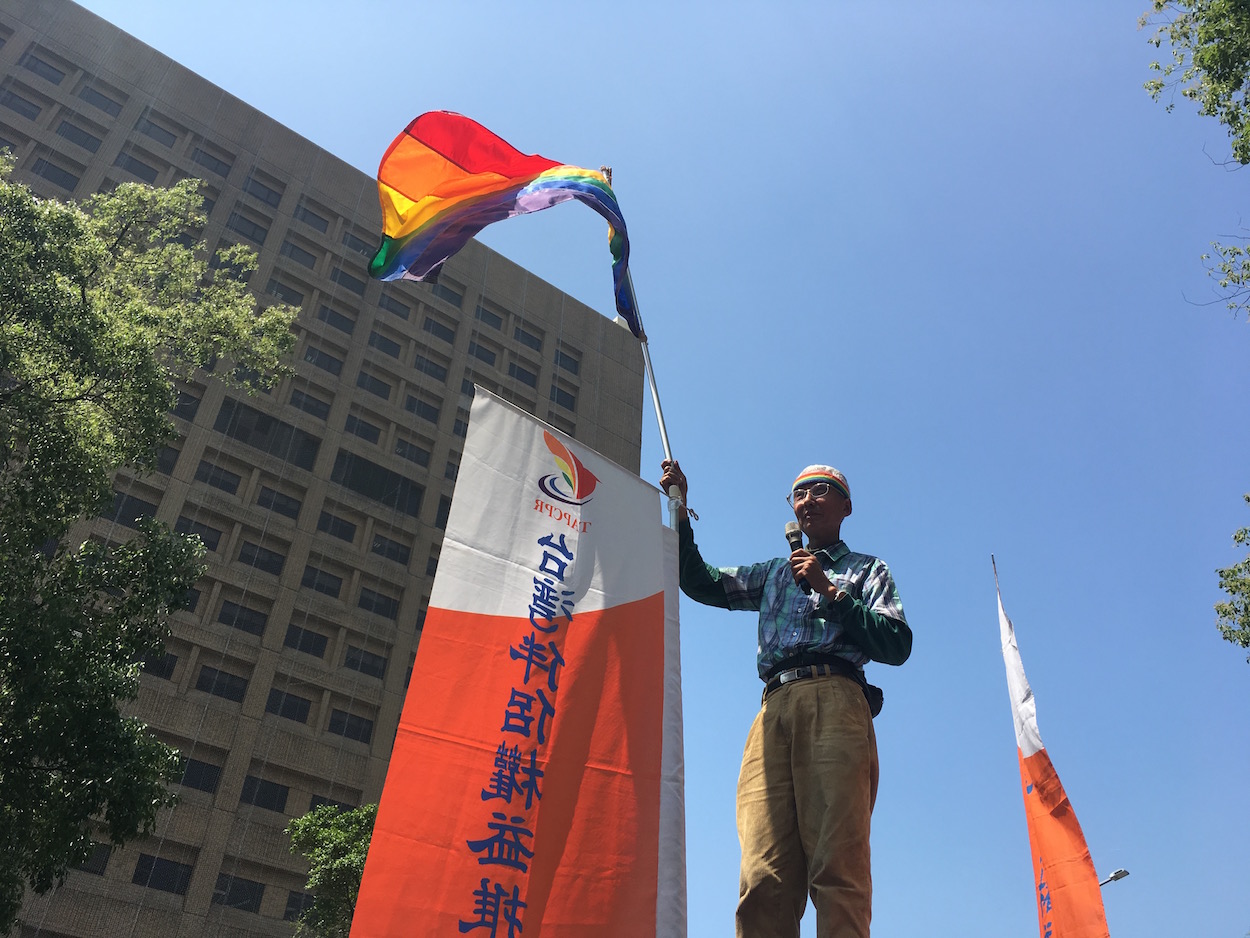 In particular, civil society has rapidly concretized the view that the referendum is unconstitutional and should not be allowed to take place. Namely, what is cited is the view that fundamental human rights should not be put up for referendum, such as the marriage rights of LGBTQ individuals, or the content of sexual education in Taiwan. Longtime advocates for referendum reform in Taiwan have also cited their view that it proves mocking of their advocacy to see public referendum used in such a way, stating fear that fundamental issues will be put up for referendum in such a manner that referendum is used as a means of oppressing minorities or forcing violating political freedoms in forcing one’s beliefs onto others.

Legal challenges have thus been filed against the referendum, with the view that referendum would either supersede the authority of the Council of Grand Justices’ ruling or at the very least have some legal binding effect. The ability to organize a referendum in Taiwan is a constitutional right and referendums are not simply consultatory of public opinion, as is the case in some countries with provisions for public referendum, such as took place in Australia last fall, and has a legally binding effect on branches of government. Legally speaking, the referendum may be something of untested territory, seeing as this may be the first referendum to be held after successful changes to the Referendum Act pushed for by Taiwanese civil society groups. 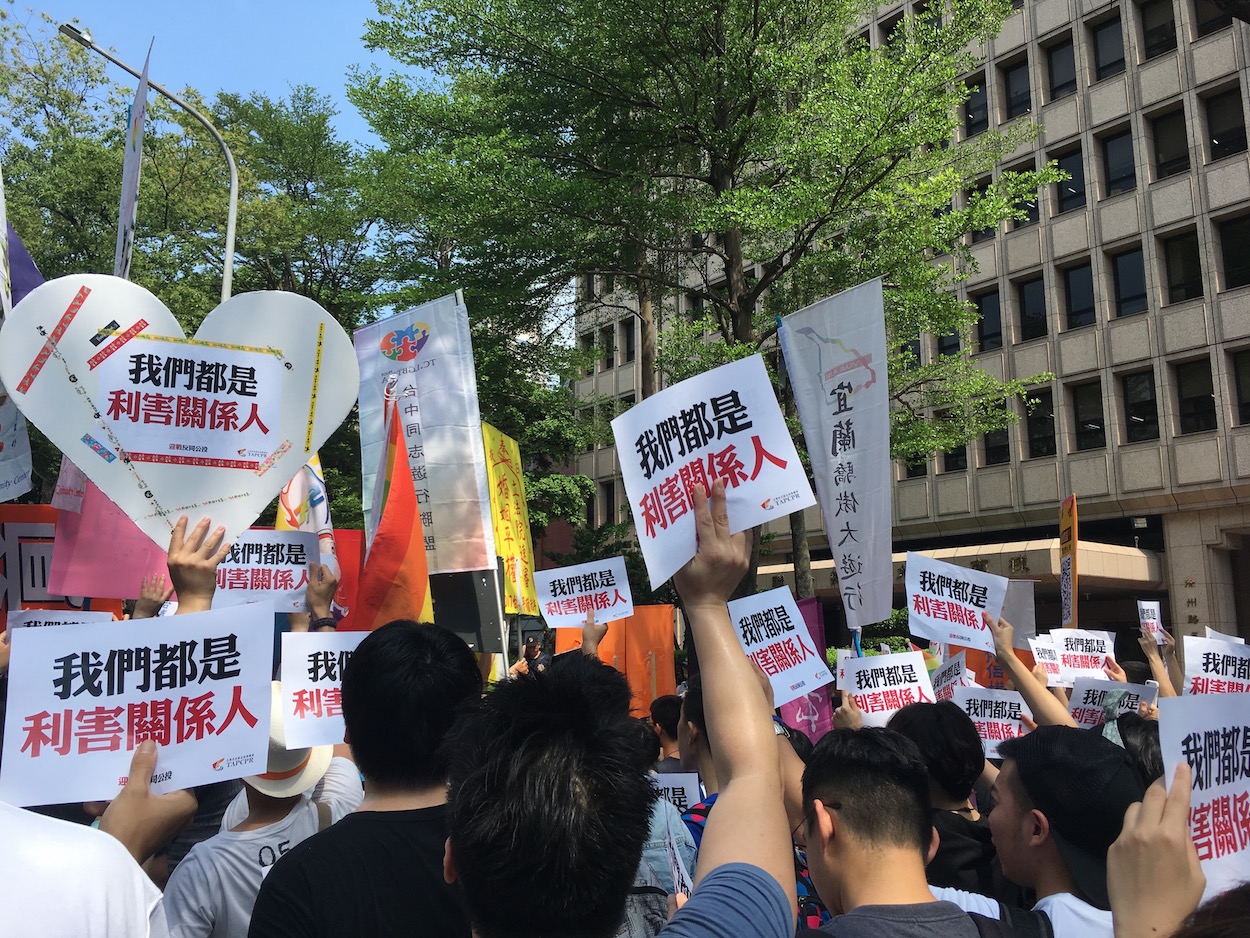 Many criticisms by speakers were directed towards the DPP. New Power Party legislators Huang Kuo-Chang and Hsu Yung-Ming would raise the issue of that the New Power Party had tried to push for changes to the Civil Code to legalize marriage equality in accordance with the ruling of the Council of Grand Justices, but this was blocked by the DPP, also criticizing the referendum as a waste of public resources. Chen Fang-Ming, as a longtime DPP member, stated that if the DPP take a stronger stance in support of gay marriage, he would no longer support the DPP in future elections, and that the DPP had demonstrated that it has long since forgotten its long years of political struggle during the dangwai movement in which, like members of the LGBTQ community, they had to resort to street protests to push for fundamental rights.

Chen would also state that in his view, there was no need for a referendum, because such a referendum had already been held with the Taiwanese public voting in the DPP into office on campaign promises of legalizing gay marriage. On the other hand, while speakers were mainly critical of the Central Election Commission, striking a bit of an odd note, Chi Chia-Wei would raise his belief that the Central Election Commission only passed the referendum with the belief that the referendum would not pass and that they actually supported marriage equality, as a way to consolidate LGBTQ groups. 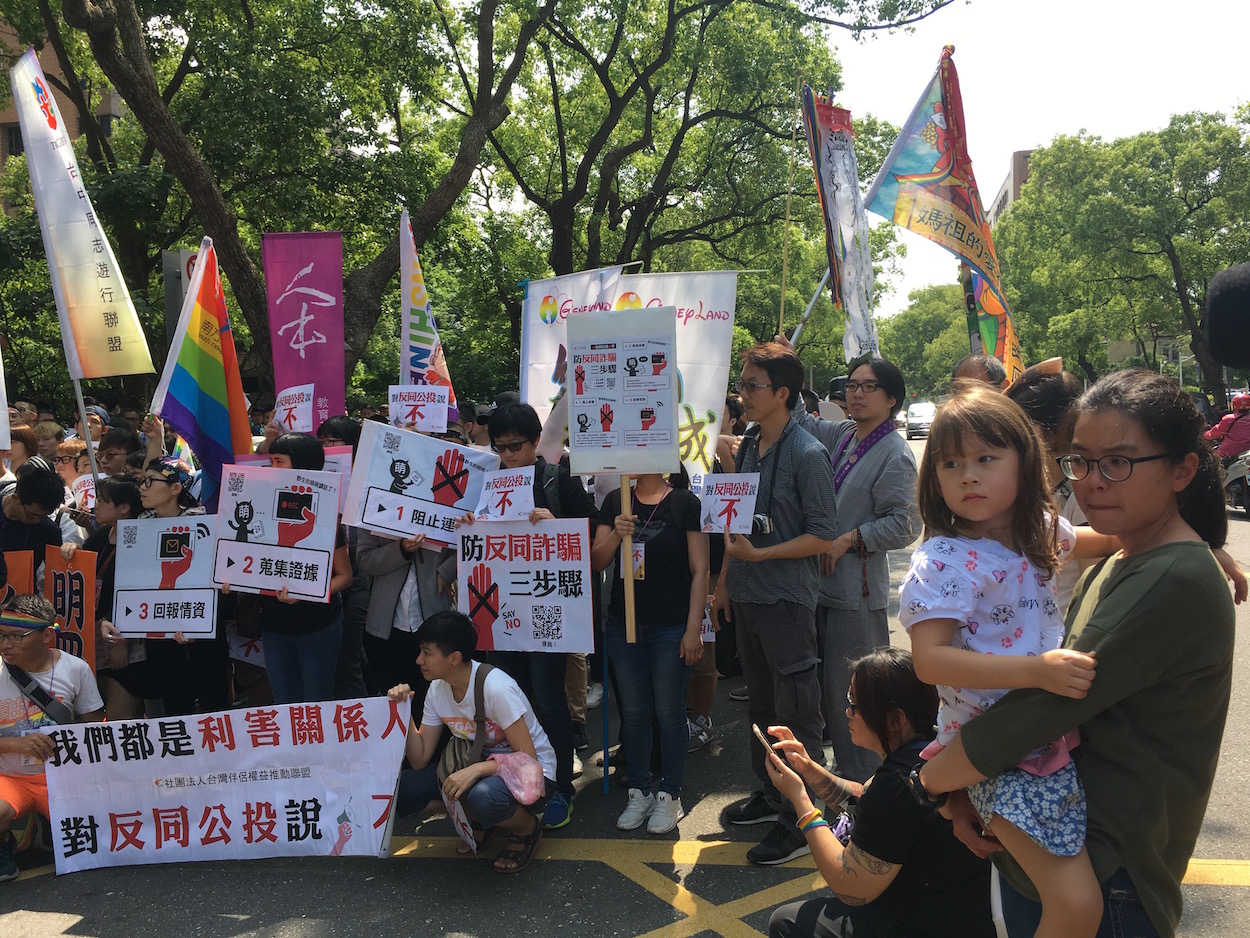 Indeed, it would also be raised by speakers that the DPP may have simply embraced the issue of marriage equality in order to highlight differences between Taiwan and China, but that in the end, the DPP had no interest in following through on the issue due to its own internal prejudices against members of the LGBTQ community, eventually reversing course altogether. Legalizing marriage equality was a campaign promise of Tsai Ing-Wen during 2016 presidential elections, but following opposition from within the DPP, in which the Presbyterian Church is a powerful force, Tsai eventually dropped the matter and has long since ceased to advocate for marriage equality.

Lawyers would raise that the Council of Grand Justices had even taken to backsliding on its ruling, which should have been legally binding, with ambiguity by justices regarding the contents of the ruling in the face of public opposition by anti-gay groups, and vague and confusing phrasing on the referendum itself. Members of education groups would also raise the importance of LGBTQ education as a part of sex education, both for adults and children, in order to combat prejudices and educate about issues facing LGBTQ individuals. Christian and Buddhist religious leaders would be critical of members of their faith advocating bigotry in the name of religion. 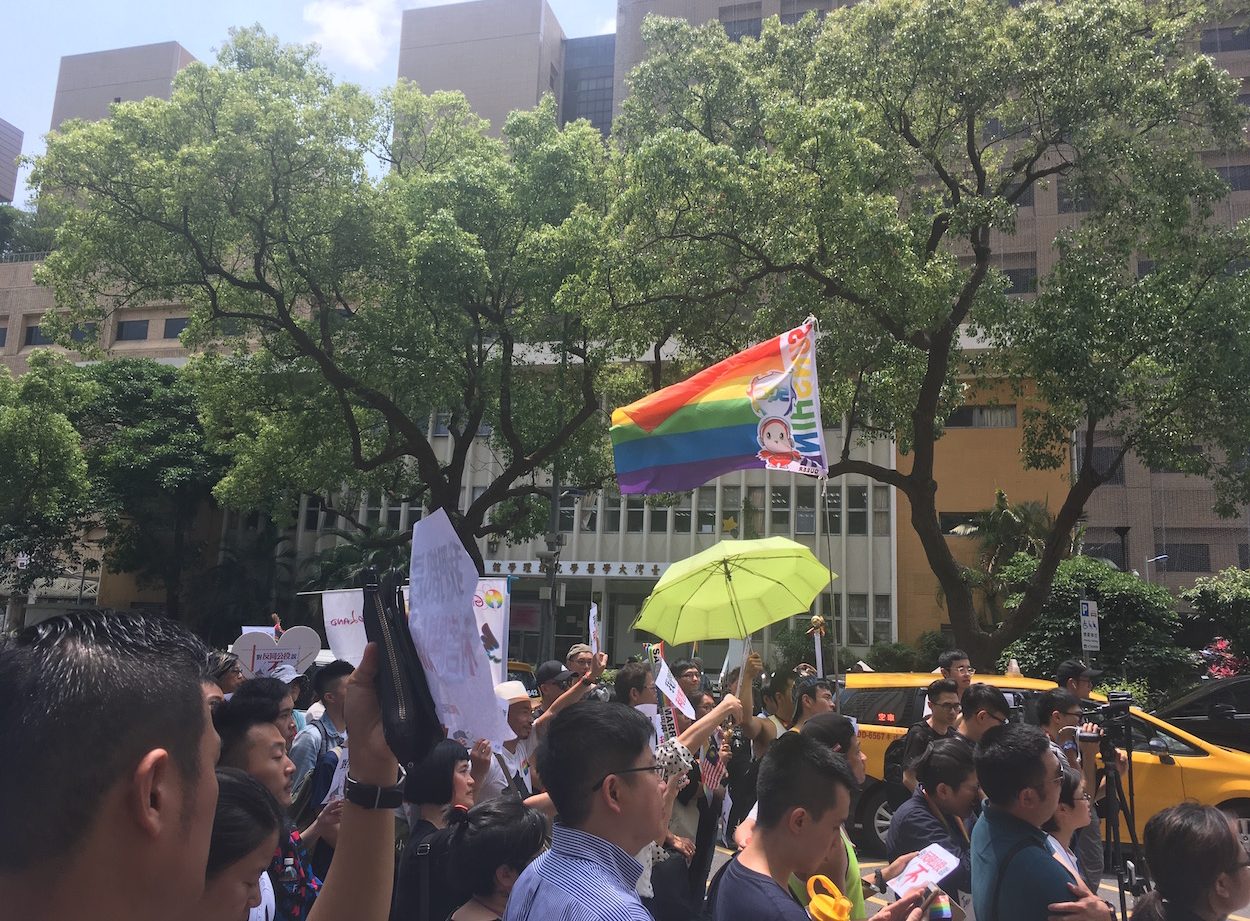 In the meantime, while it remain to be seen whether legal challenges against the referendum are successful, the referendum may prove a test of whether Taiwanese society is truly as progressive as many claim it is. Anti-gay groups now need to obtain 280,000 signatures in order to pass the next set of benchmarks to advance the referendum process along. Whether this passes or not, or whether the referendum is able to make it all the way towards being held, either way, this will prove a test of whether Taiwanese society genuinely stands for the progressive values it is often seen as having.