FOLLOWING A dramatic series of attempts to invade the Legislative Yuan and a blockade of the intersection of Zhongshan South Road and Qingdao West Road, protest today against planned changes to the Labor Standards Act were not successful in preventing the act from passing. Nevertheless, although labor organizers fear that the changes will pass speedily into law following a second and third reading on the floor of the Legislative Yuan, one can expect further protest to happen when this happens in the near future.

Protests began today at 9 AM, when the committee review of the planned changes began. It is suspected by many that the legislature has deliberately taken to scheduling reviews of planned changes for morning times on weekdays, when workers would have more difficulty making it to a protest, meaning some need to take days off to make it. Likewise, this has allowed DPP legislators to make the accusation against workers that they are not real workers demonstrating, seeing as they seem to have so much time to protest. 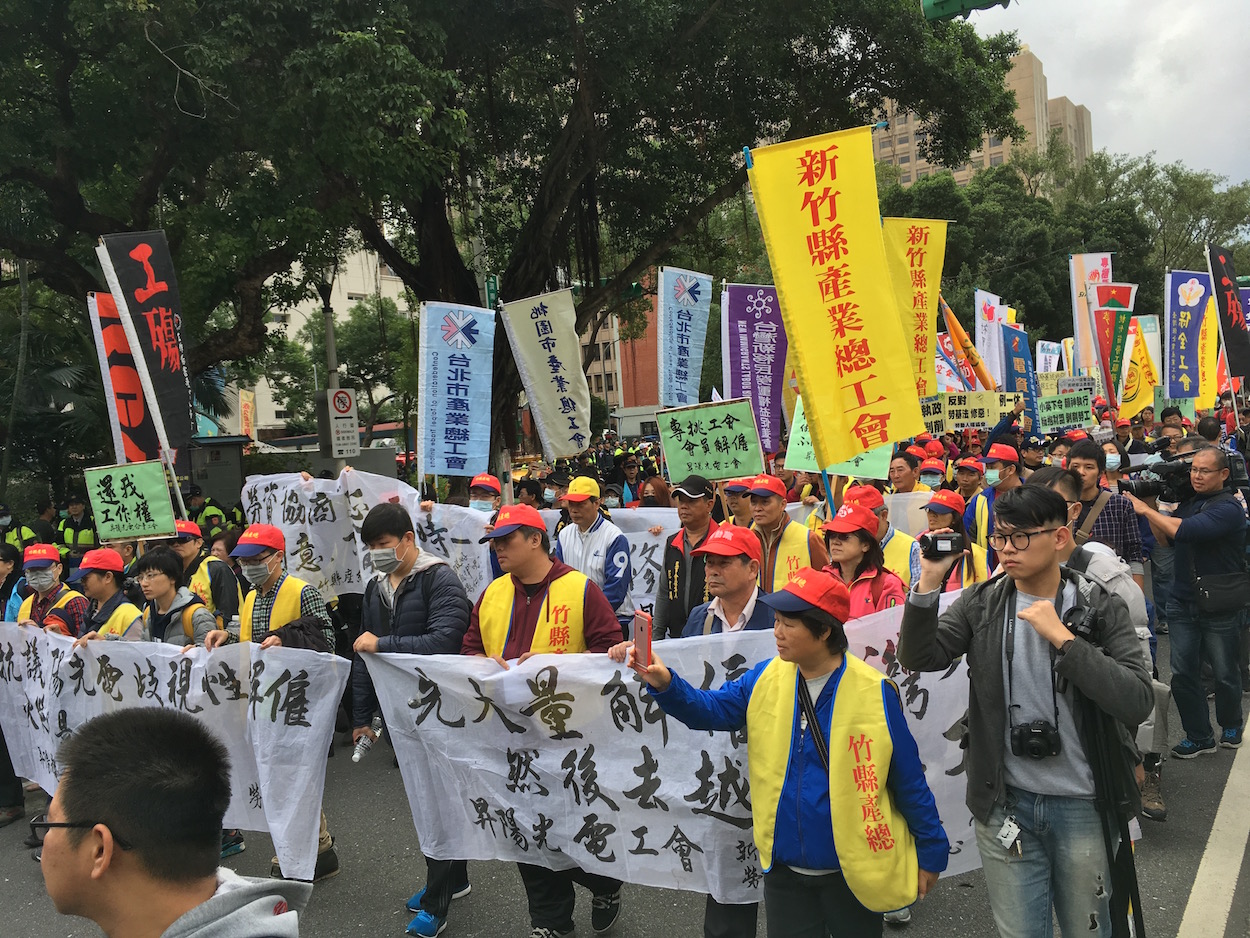 Nevertheless, as observed in a small but spirited protest which began at 9 AM on November 23rd, which saw three attempts to invade the Legislative Yuan, even if this scheduling has indeed been limiting of labor group’s ability to mobilize en made, this has not prevented resistance from taking place. Labor groups and activists are all too aware of the high stakes of the bill, which some term to be a bill that will undo thirty years’ worth of labor reforms.

Under new labor regulations, the minimum time between shifts for workers can be lowered to eight hours, meaning that workers might not even have a full eight hours of sleep before they called on to work again. Furthermore, overtime pay is decreased, new regulations that allow for the deferral of vacations could mean that workers are indefinitely forced to postpone their vacations, and workers lose the set day off per week that they originally had, this becoming a “flexible rest day” in which they could still be made to work. 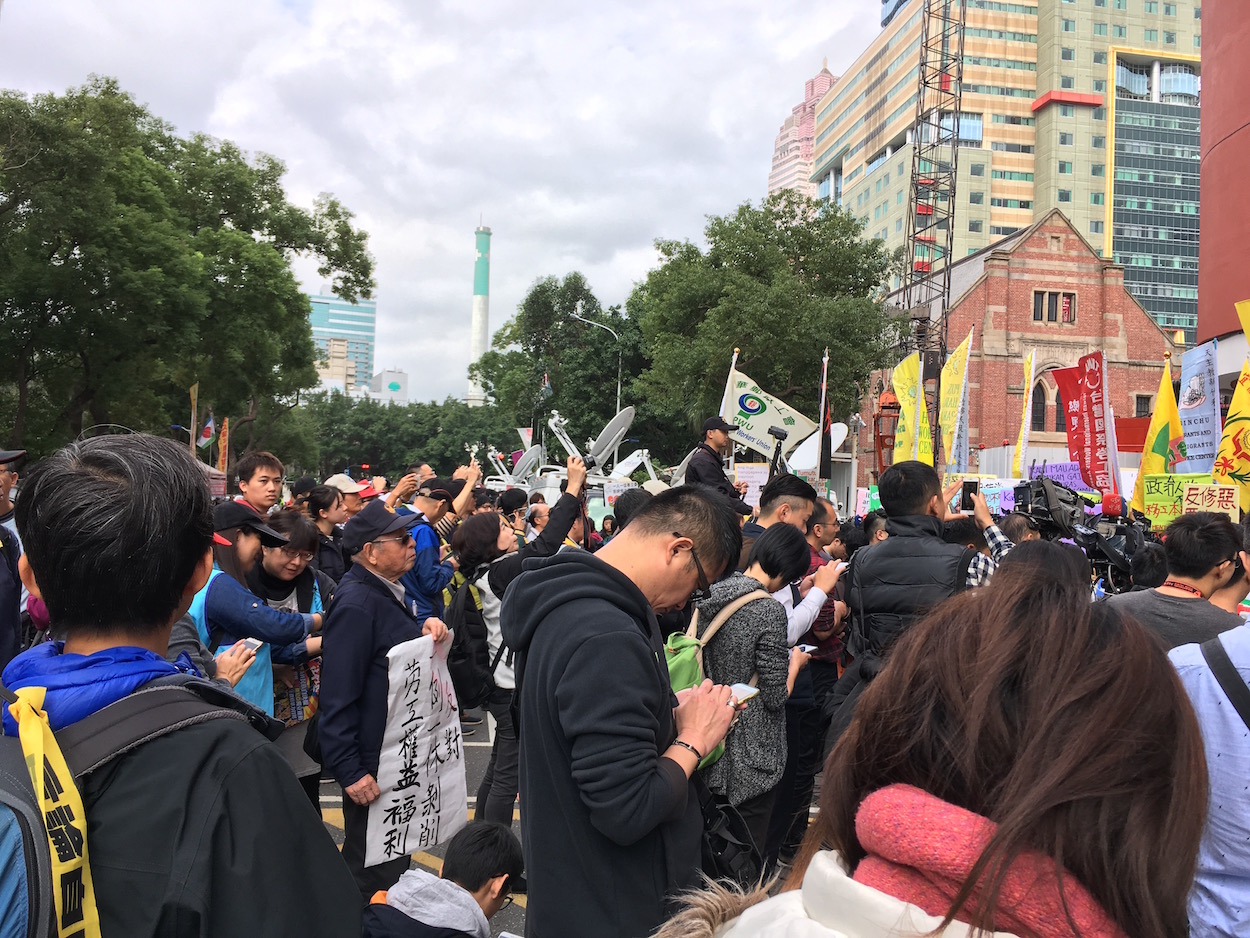 As such, during the day, today’s protest largely followed the same pattern as November 23rd’s protest, with several marches around the Legislative Yuan and three attempts to occupy the Legislative Yuan. The three charge took place at approximately 11:30 AM, 12:30 PM, and 1:30 PM, following which labor groups returned to a holding pattern of speeches and chanting slogans until nightfall, with organizers urging that people should call their friends over after they got off of work. The last charge at 1:30 PM was particularly ferocious, with police handling elderly demonstrators roughly, and a group of demonstrators kettled by police for a period of time. 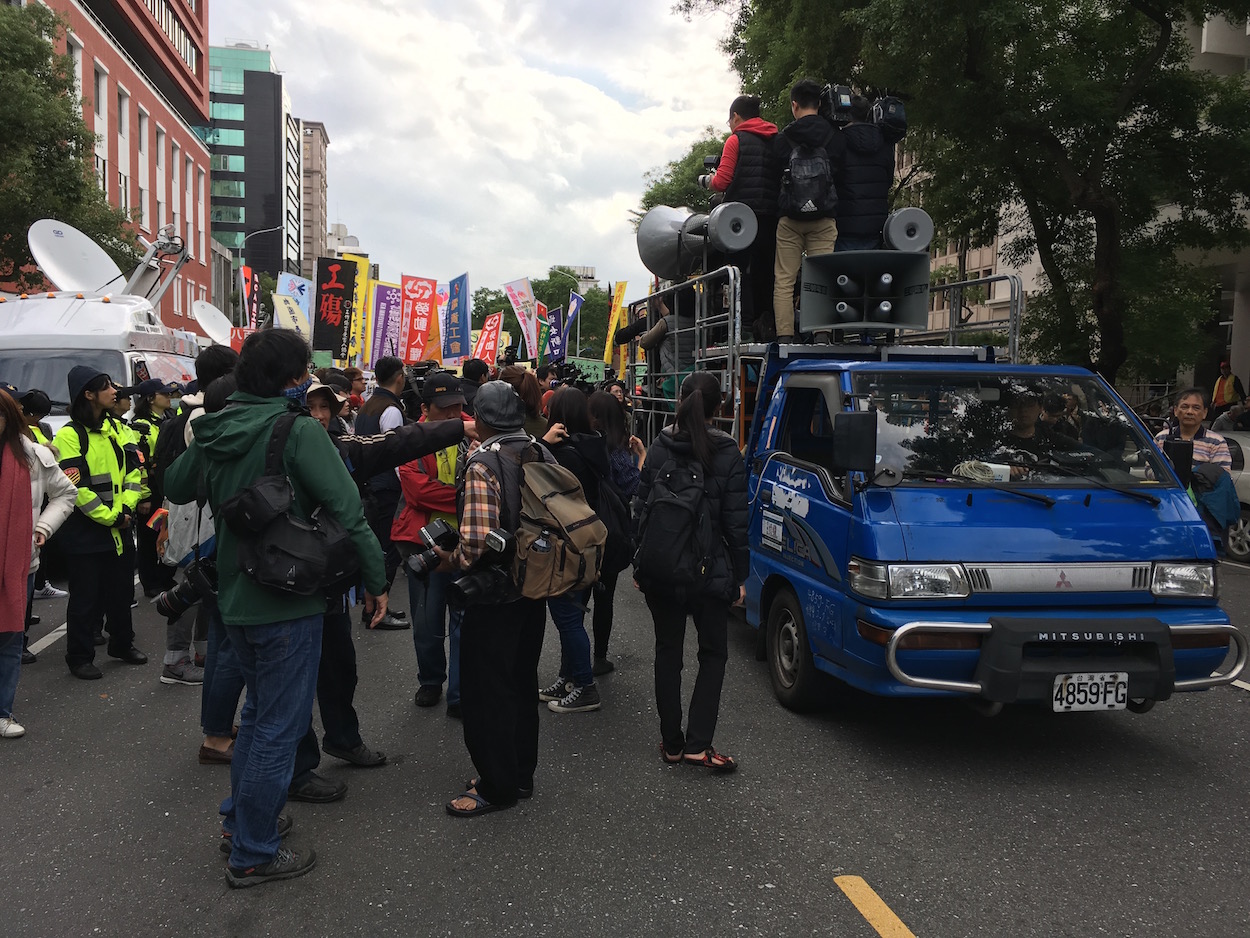 At night then, it was expected that an escalating action would be taken, utilizing the greater amount of people on-site. In the meantime, within the Legislative Yuan, to prevent a recurrence of the events of last Thursday, in which opposition lawmakers Hsu Yung-Ming and Chiang Wan-an were able to delay the bill through filibustering it, legislators were limited to six minutes of discussion each. Although members of Hsu Yung-Ming and Kawlo Iyun of the NPP and Chiang Wan-an of the KMT attempted filibusters, they were dragged off. As with demonstrations last Thursday, comments by DPP legislator Chiu Yi-ying were enraging of youth activists, with Chiu shouting at Hsu on November 23rd that, “The Sunflower Movement has collapsed!”, and Chiu claiming today that protesters were not so many in number because they were playing an audio recording of protest slogans during rest periods in the protest. 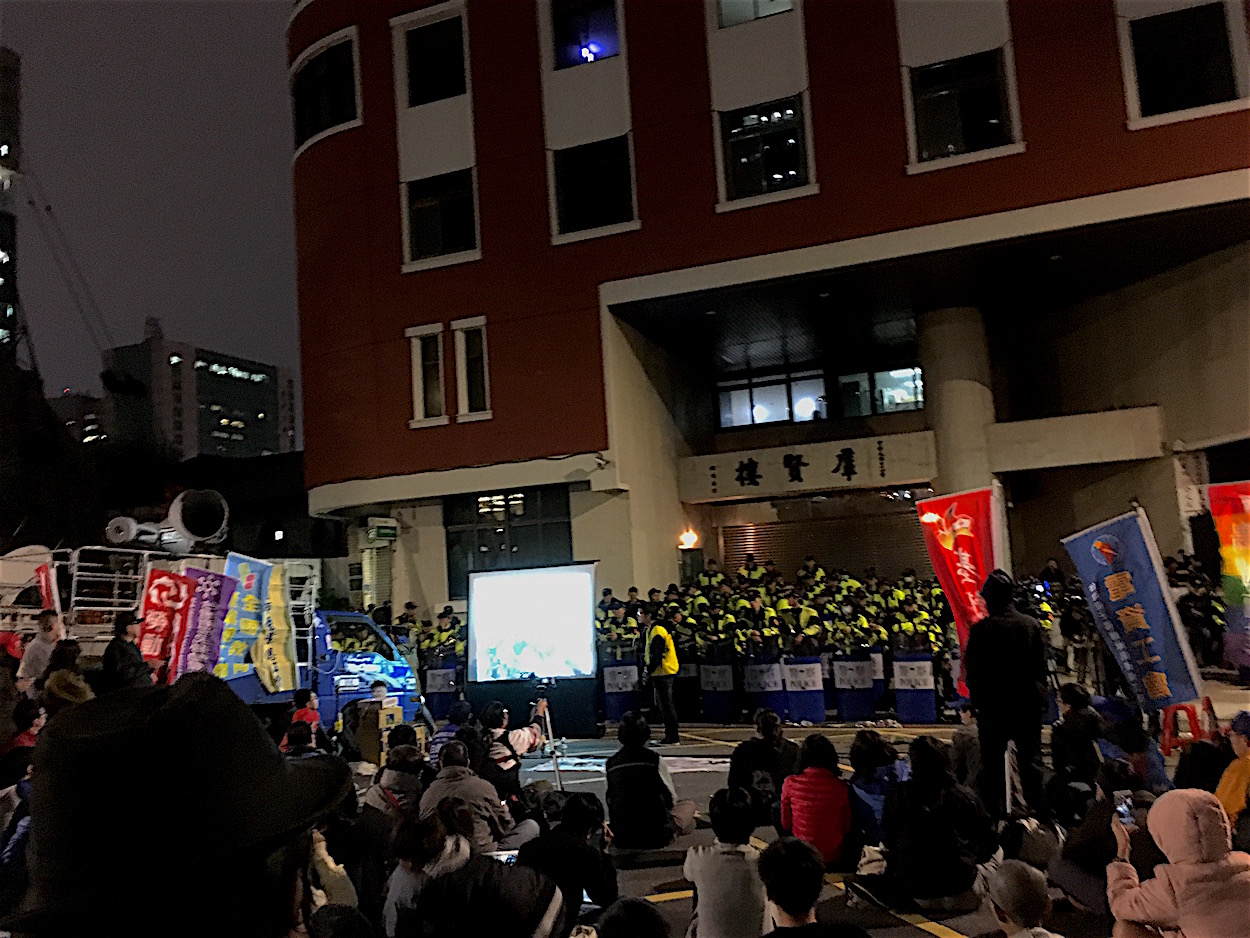 After an hour, however, police were able to outmaneuver demonstrators and encircle demonstrators, attempting to drag organizers off of the speaker truck that they were using to direct actions, and several clashes breaking out between demonstrators and police. In the end, due to being completely encircled and because microphone equipment malfunctions made it difficult for organizers to direct the crowd via microphone , demonstrators declared that they would disperse and regroup for another day, and police mostly allowed demonstrators to leave. By that point, news had come that the bill had cleared the committee, meaning that the day’s events had not succeeded in blocking the bill, the committee originally having extended time for discussing the bill until 12 PM.

But while most demonstrators left, instead of completely dispersing, around fifty demonstrators stood around waiting to see if anything further would happen for thirty minutes, eventually moving to Ketagalan Boulevard. However, seeing that most demonstrators had left, this seems to have emboldened police shortly after midnight, with police dragging away twenty demonstrators, beating them, and demanding that livestreamers broadcasting these events stop live streaming. At one point, police were filmed beating demonstrators in a police bus they had been dragged into, with one demonstrator’s head smacking into the glass window of the bus and cracking the glass. 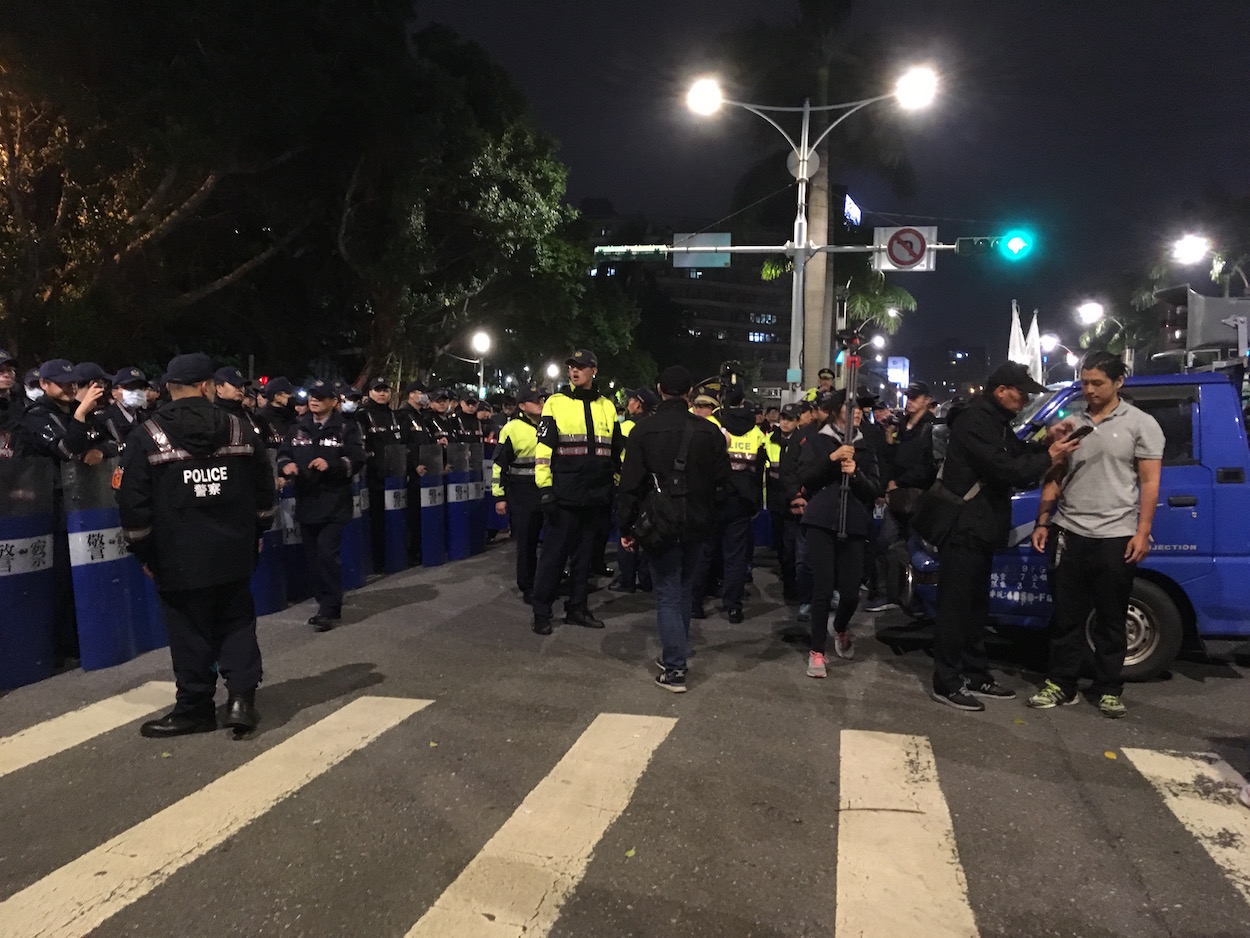 Indeed, police actions have generally been shocking for many, given their unusual extremity. In general, this use of violence will add to the perception that the DPP is no different from the past KMT, in consideration of the KMT’s past usage of violence during incidents in the course of the Sunflower Movement such as the attempted occupation of the Executive Yuan. Many slogans today during the protest, likewise, equated the KMT and the DPP, claiming that the DPP was the “second-generation KMT,” having long since betrayed the ideals of the dangwai movement from which it emerged, or calling Tsai Ing-Wen, “Ma Ying-Jeou 2.0”.

One expects that in the future, activists will label the DPP a party willing to resort to authoritarian means to enact its will, no different from the KMT, something which will not be helped by the accusation that the DPP has proven willing to circumvent oversight mechanisms to force planned labor changes into law, as observed in not holding sufficient public hearings about labor law changes, or ensuring that the majority of speakers are big business owners. 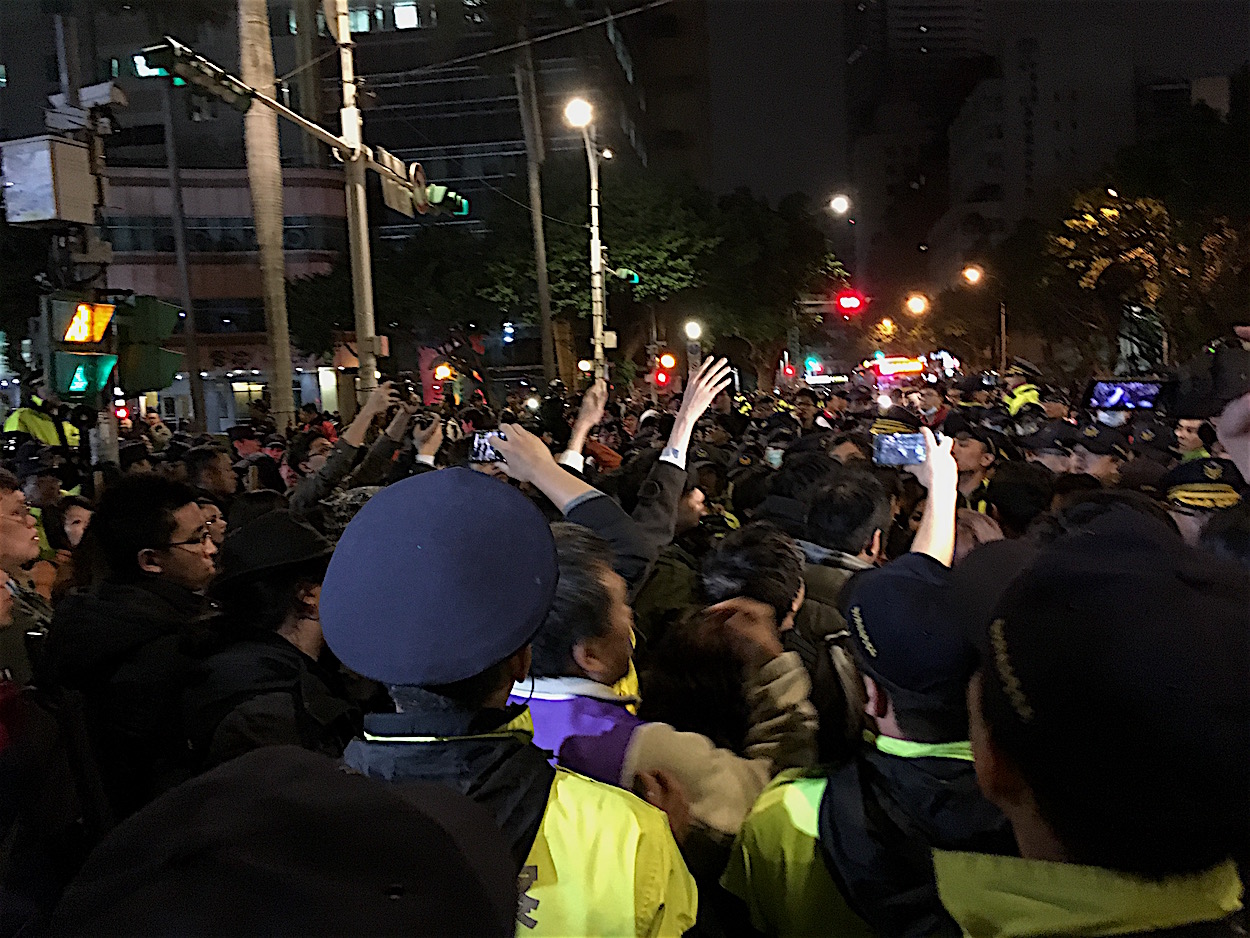 Comments by police were also enraging insofar as police claimed that protesters needed to be “Peaceful and rational” when police did not behave peacefully or rationally in beating protesters or attempting to force live streamers not to broadcast their actions, and also told protesters that they were putting individual interest ahead of collective interest in blocking roads to demonstrate their issues, never mind that the precise point of demonstrating planned changes to labor laws is because they stand to affect the collective interests of Taiwanese society. Demonstrators sometimes in comments called for laws to be changed so that police can unionize, as a way of giving police leverage to refuse unjust orders from their superiors, although the benefits of that idea may be questionable due to the actions of police unions in other contexts.

One can expect future protest regarding the issue, following on the heels of the humorous protest against planned changes which took place yesterday. Although there is the possibility that protesters will be worn down from having to protest the issue continually, changes to labor policy stand affect all of working Taiwanese society and changes as wide-sweeping as the the DPP intends to force into law stand to turn the public writ large against the DPP. 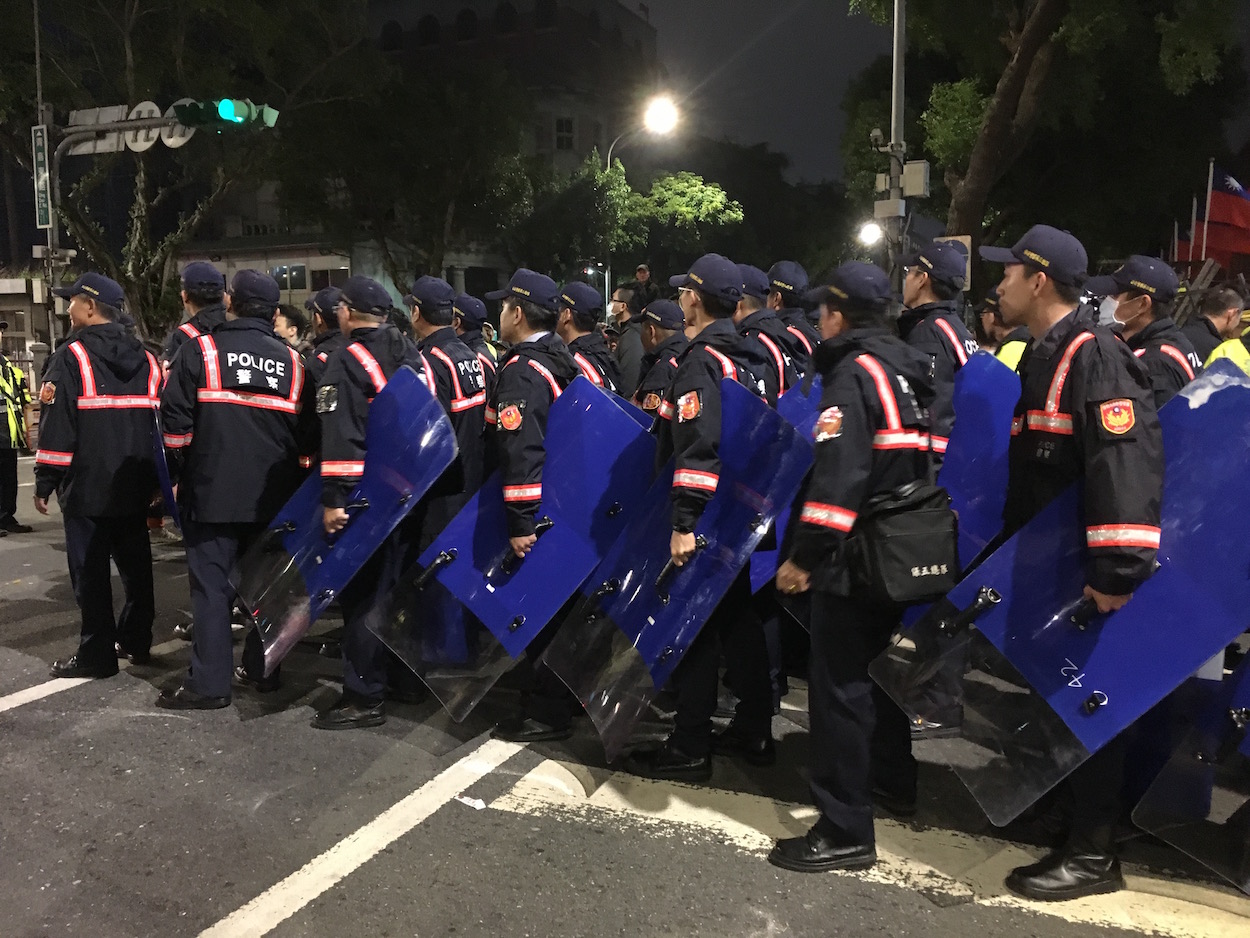 Prominent figures of Taiwanese activism including Aman Wu, Miao Poya, Fan Yun, Chen Shang-Chih, Wang Yikai, Lin Yu-lun, Panay Kusui, and others were all present at today’s demonstration, demonstrating how labor issues are a large overriding concern for Taiwanese youth activists at present. Fan Yun and Chen Shang-chih were among those to charge the Legislative Yuan during the second charge in the afternoon and Miao Poya was among those who witnessed police violence on Ketagalan Boulevard, livestreaming the event. Groups present included the Social Democratic Party, Green Party, Legal Aid Foundation, labor unions, and a number of migrant workers’ groups, a first for labor demonstrations regarding the issue to date. 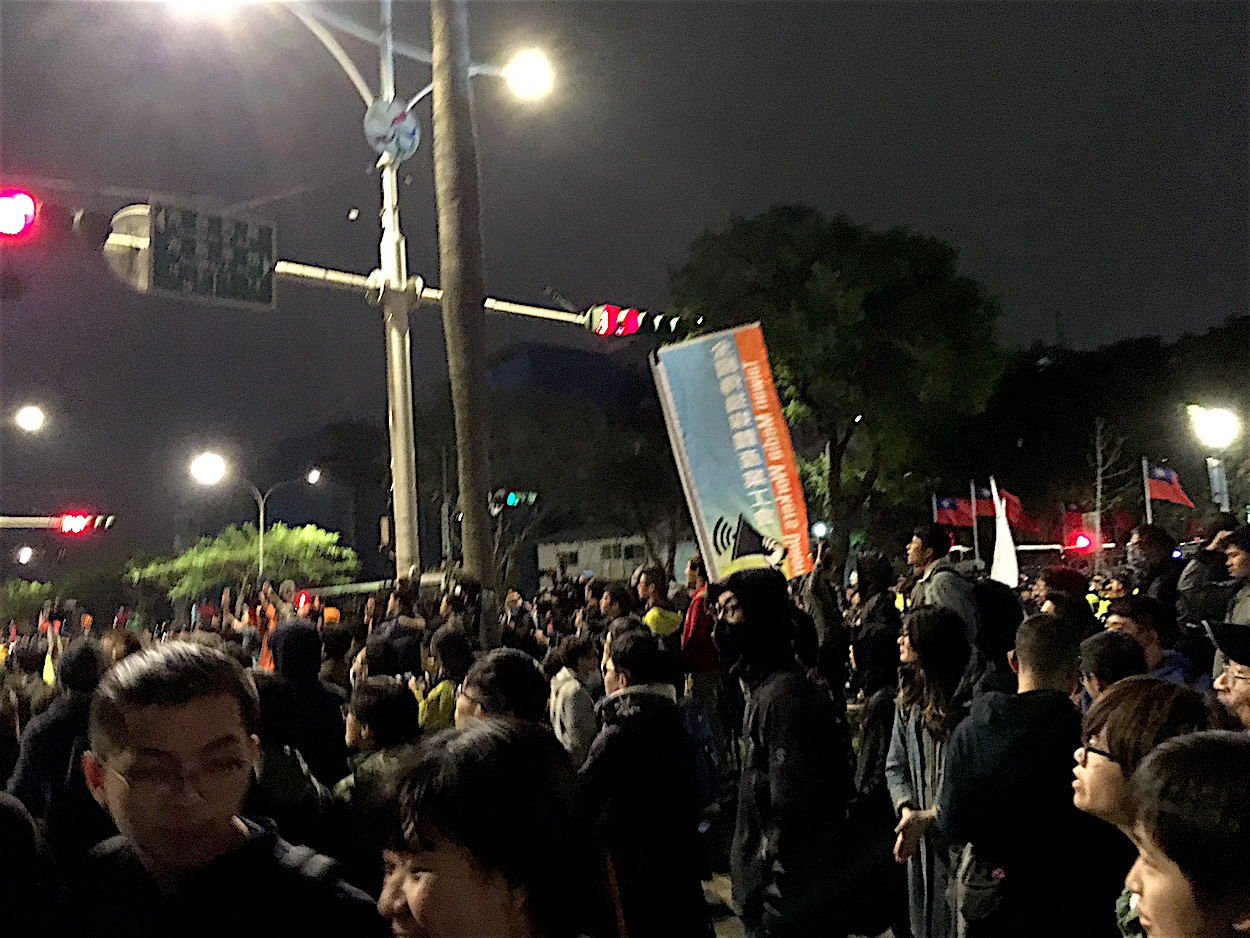