ANGRY REACTIONS have broken out from the indigenous community and their allies after police attempted to remove the current occupation on Ketagalan Boulevard in front of the presidential office demonstrating against the failure of the Tsai administration to restore traditional lands. Police attempts to dismantle the indigenous occupation began at approximately 10 AM yesterday and reportedly involved over one hundred police officers.

Heavy police presence continued through the day, with part of the encampment structures being dismantled. Police attempts to fully remove indigenous groups were unsuccessful and indigenous groups remained camped out on Ketagalan Boulevard, holding speeches and performances as the night went on. However, this is probably the largest concerted attempt by police to force indigenous occupiers off of Ketagalan Boulevard to date. Demonstrators are charged with violating the Assembly and Parade Act, a much hated law by much of Taiwanese civil society because of its use as a means of putting down political dissent in a manner harkening back to the authoritarian period. The Tsai administration had previously vowed to take steps to amend the Assembly and Parade Act because of widespread perceptions that it is authoritarian in nature. 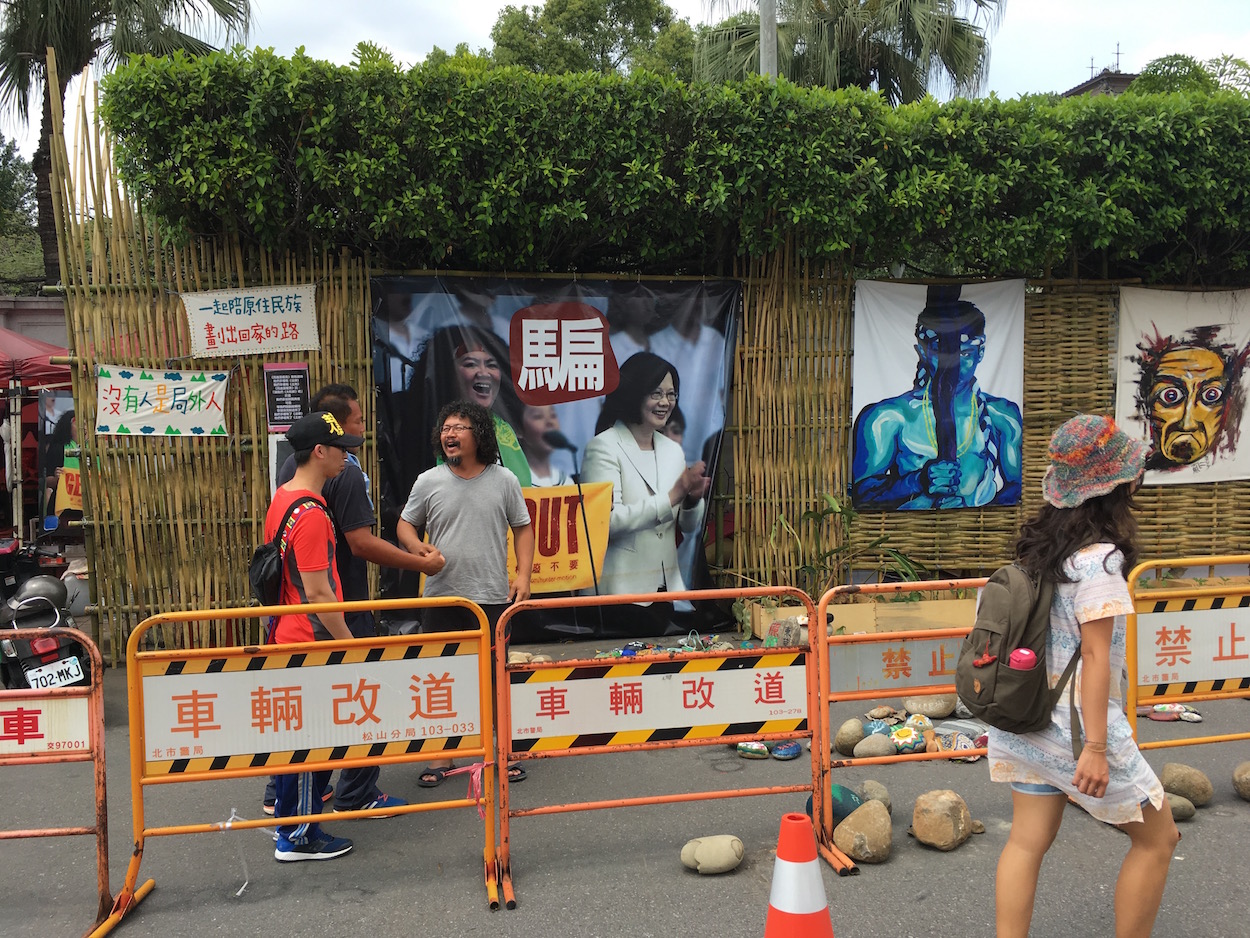 Yesterday was the 69th day of the occupation, meaning that indigenous demonstrators have been camped out on Ketagalan Boulevard for over two months since the occupation began on March 19th. The demonstration has largely been led by documentary filmmaker and activist Mayaw Biho and singer-songwriters Panai Kusui and Nabu Husungan Istanda, who are married. Panai recently released an album of songs written while camped out on Ketagalan Boulevard to draw attention to the continuing occupation. Other recent actions include painting a number of rocks with images representative of their wishes and leaving them piled up by the side of the occupation encampment, with invitations for passers-by to add their own thoughts to the rocks if they wish.

While the Tsai administration officially apologized to indigenous for past treatment in August of last year, this was demonstrated against by indigenous who pointed to the need of the Tsai administration to follow its words with concrete action. Yet what provoked the current occupation would be the draft proposal put forward by the Council of Indigenous Peoples to restore traditional lands to indigenous did not restore lands which are privately owned to indigenous. Although indigenous estimated the size of their traditional lands as consisting of 1.8 million hectares, indigenous would only be granted 800,000 hectares under the proposal. 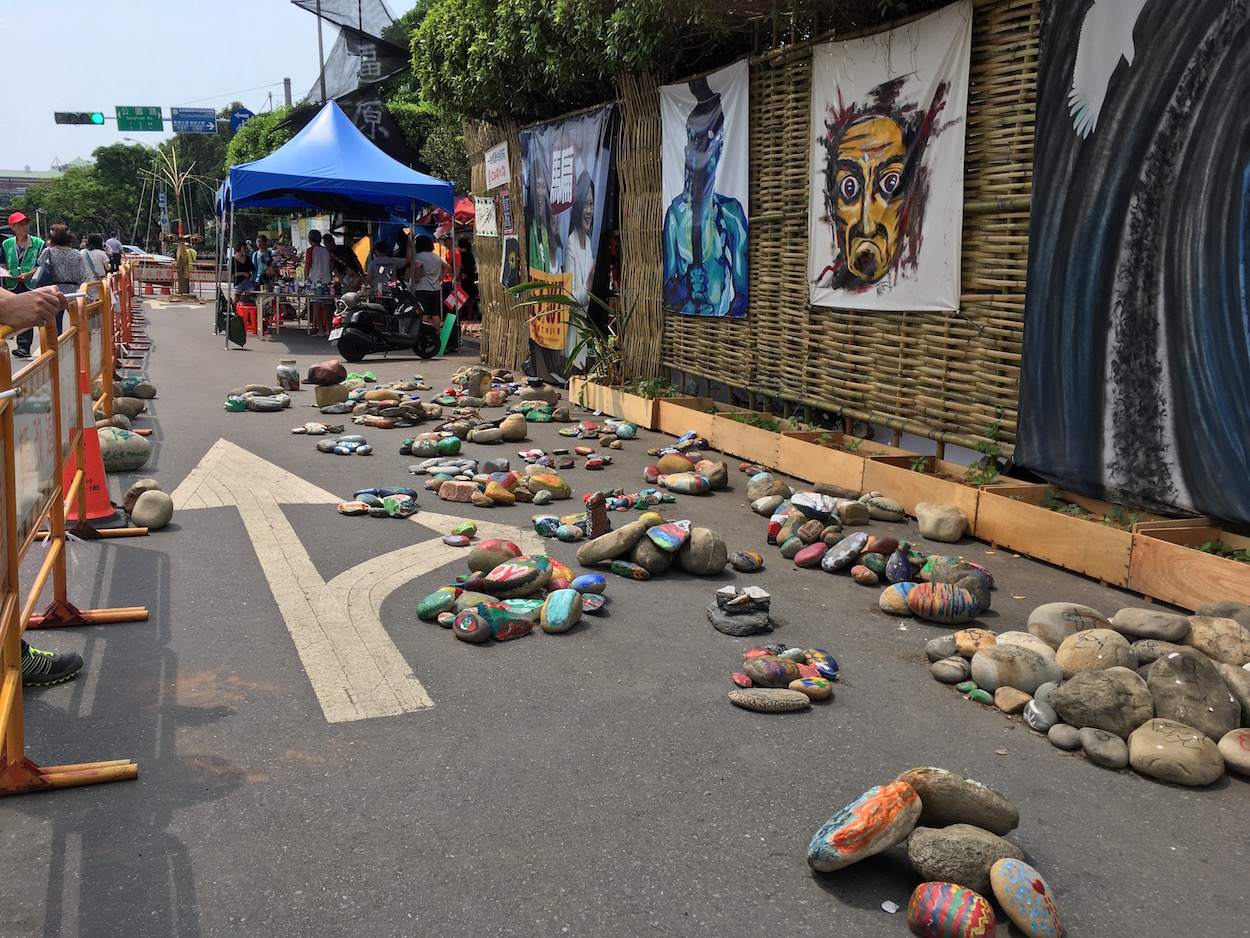 Tsai’s inauguration in large part spotlighted Taiwanese indigenous and its history of successive waves of colonialism, presumably as a way to differentiate Taiwan from China and to distance her administration from the KMT’s Sinocentric view of Taiwanese history. Her apology to indigenous also seems to have been aimed at accomplishing this goal. Nevertheless, Tsai’s lack of action at present is indicative, as while Tsai met with indigenous demonstrators who protested her apology to indigenous to call for more concrete promises by the Tsai administration through an earlier occupation on Ketagalan Boulevard which included many of the present demonstrators, she has refused to engage with the present occupiers on Ketagalan Boulevard entirely. Despite Tsai being part indigenous herself, it seems that we can view Tsai’s actions as simply part of continued attempts by Han Taiwanese to use Taiwanese indigenous to differentiate Taiwan from China, using Taiwanese indigenous for the purpose of a Taiwanese Han nationalism without any regard for indigenous themselves. 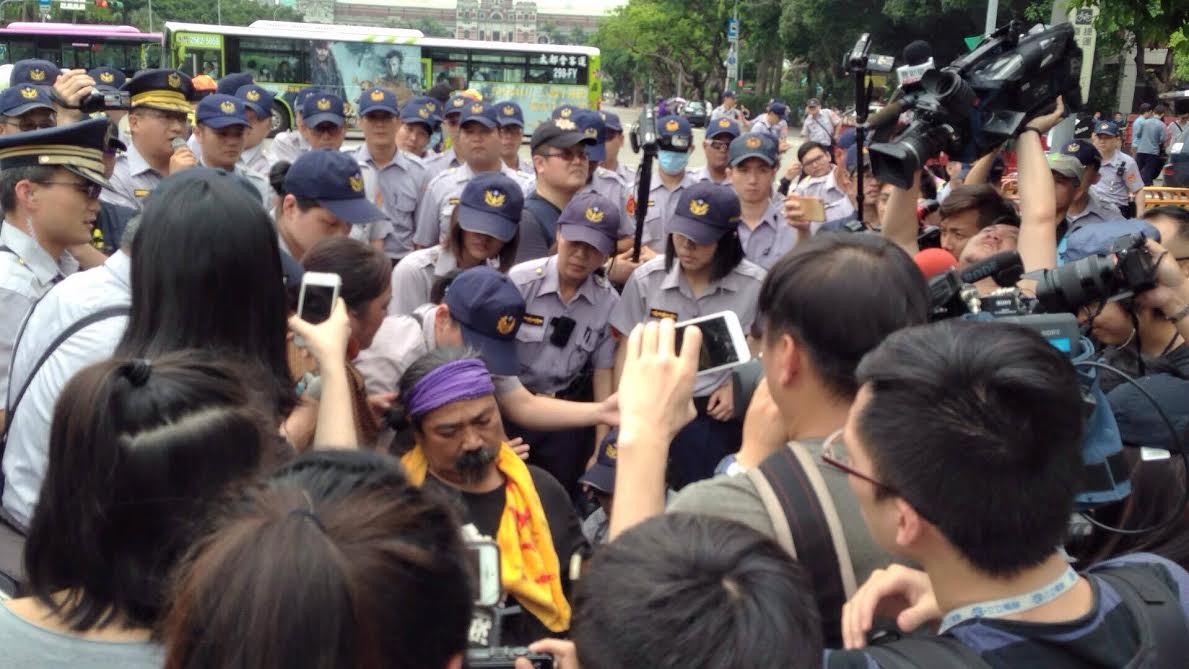 Indigenous groups show no sign of backing down from their current occupation. It remains to be seen whether police will continue to try and harass the occupation to try and force them off of Ketagalan Boulevard. We may note that in the Shandao Temple area, there exist a number of politically motivated occupations at present, including KMT demonstrators against the Tsai administration’s push for pension reform, and Taiwanese independence demonstrators from the Alliance of Referendum for Taiwan who call for a public referendum as a way for Taiwan to settle the issue of unification/independence.

Yet it seems to be indigenous groups which face disproportionate targeting by police in past months. This occurs in spite of the fact that their demonstrations have entirely been peaceful, contrasting highly to KMT demonstrators against pension reform who have physically attacked lawmakers, breaking two of Taoyuan mayor Cheng Wen-Tsan’s ribs, and even called for the assassination of Tsai Ing-Wen. In reflecting upon policing practices for indigenous demonstrations since Tsai Ing-Wen’s apology to indigenous, one notes that police actions are unusually forceful for indigenous demonstrations, relative to other protests of similar size. Furthermore, the use of the Assembly and Parade Act opens the Tsai administration to the accusation that it is no different than previous political administrations in forcibly silencing protest using laws which hark back to the authoritarian period.

Regardless, it broadly remains that many questions of justice remain to be settled for Taiwanese indigenous, inclusive but not only in regards to the traditional lands issue. Whatever the outcome of the occupation, these questions need to be addressed, and the Tsai administration’s silence on the matter is revealing.