ONE DAY AFTER Tsai Ing-Wen’s inauguration, we may perhaps look back in further detail upon one of the events which prompted controversy during the inauguration ceremony—the musical performance which preceded Tsai’s inauguration speech. The performance, entitled “Taiwan’s Light” (台灣之光), was a depiction of Taiwan’s history meant to represent Tsai’s incoming presidency as the beginning of a new era, but the political contradictions present within the performance may actually prove to be a sign of the challenges faced by the incoming Tsai administration. Namely, in the way that the Tsai administration will be a DPP administration taking power following a KMT administration and a DPP administration operating within the Republic of China framework that the DPP has traditionally bucked against, the performance was an overlap of a more pro-Taiwan DPP version of Taiwanese history on top of the KMT’s view of Taiwanese history. 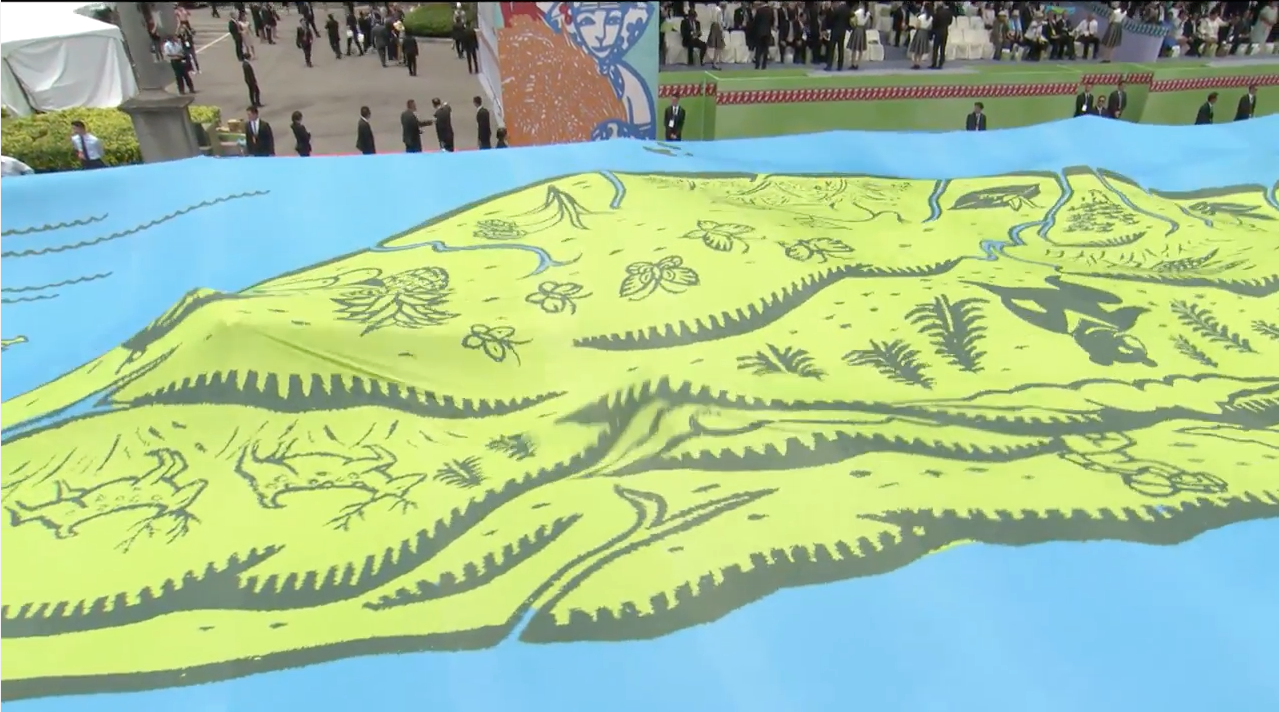 Beginning with the framing of Taiwan as a maritime island, “Taiwan’s Light” from the onset took a stance against the KMT’s Sinocentric vision of Taiwanese history which always relates Taiwan to the Chinese mainland. The emphasis on Taiwan as a maritime island with strong connection to the seas is sometimes raised in order to decouple Taiwan from the Chinese mainland, to provide a more Taiwan-centric version of envisioning Taiwanese history. 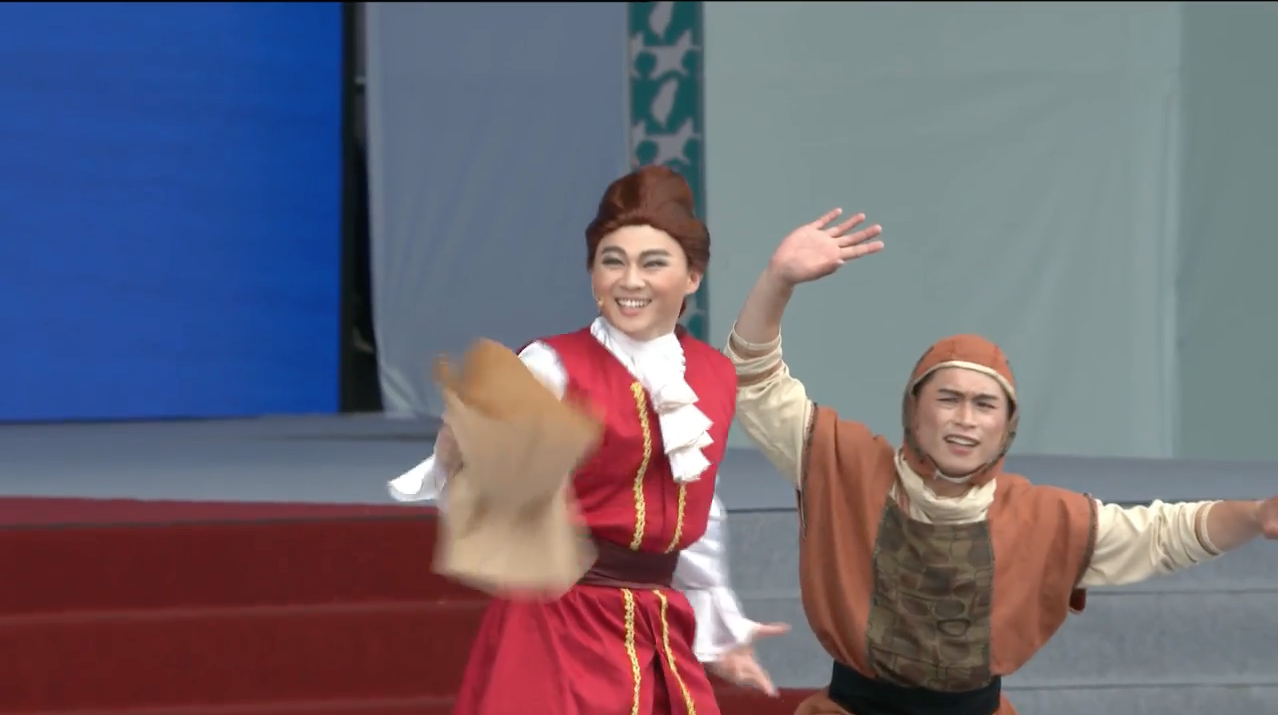 As such, the performance next depicted the discovery of Taiwan by Portuguese sailors and their dubbing of the island “Ilha Formosa”, meaning “beautiful island” in Portuguese. The name “Formosa”, though in common use as a term for Taiwan in past decades, has acquired the connotation of a more pro-Taiwan way to refer to Taiwan—as opposed to the KMT’s “Republic of China”, for example. Although Dutch or Spanish colonization was not referred to within the performance, Taiwan’s history of colonization by the Dutch and Spanish is sometimes focused upon within a pan-Green version of Taiwanese history in order to point to how the history of colonization of Taiwan sets it apart from Chinese history. 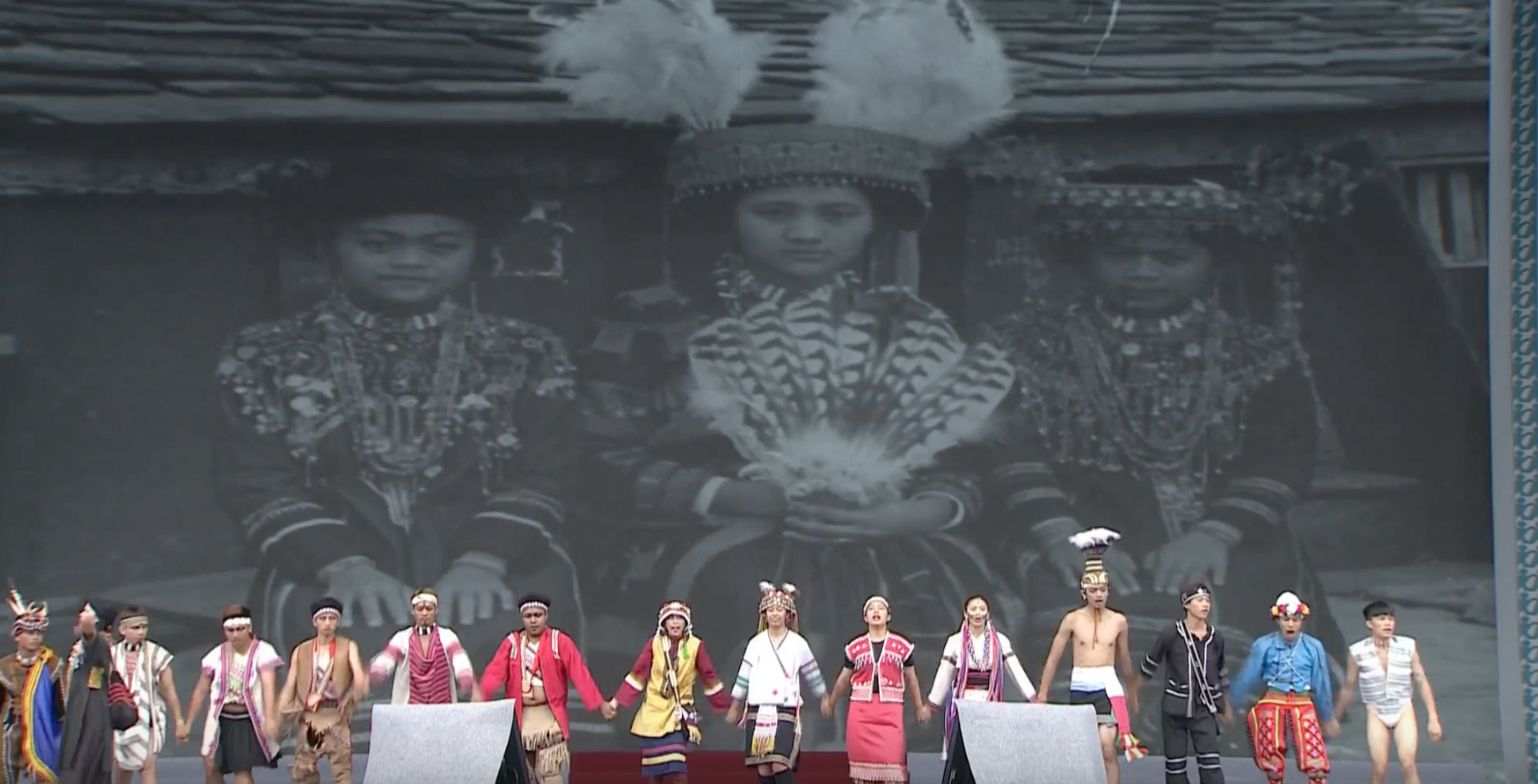 Representations of indigenous as a singing and dancing people

Yet it would be a noteworthy stylistic point that only after the depiction of the Portuguese “discovery” of Taiwan were Taiwan’s original indigenous inhabitants touched upon in the performance. This would be a view of Taiwan’s history as being a “four hundred year history”, tracing the beginning of Taiwanese history from Spanish and Dutch colonization or Han settlement, rather than in consideration of indigenous as having inhabited Taiwan for thousands of years before the arrival of the Han, Dutch, Spanish, or Portuguese. The view of Taiwan’s “four hundred year history” has been historically advanced by Taiwanese nationalism against the KMT’s China-centric narrative, though this view of Taiwanese history has also seen criticism for disregarding indigenous inhabitation of Taiwan.

It is such then, the the depiction of indigenous within the performance would see much criticism. Indigenous people were represented stereotypically as a happy singing and dancing people in the performance and the narration stated that “After the sixteenth century, religions from Western countries changed the primitive and uncultivated customs of the indigenous” (十六世紀以來西方國家帶來的宗教，改變了原住民草莽而粗獷的習俗). If there has been some debate among English language commentators about whether or not this language was offensive in Chinese, make no mistake, the language was offensive—prompting immediate reactions on social media. 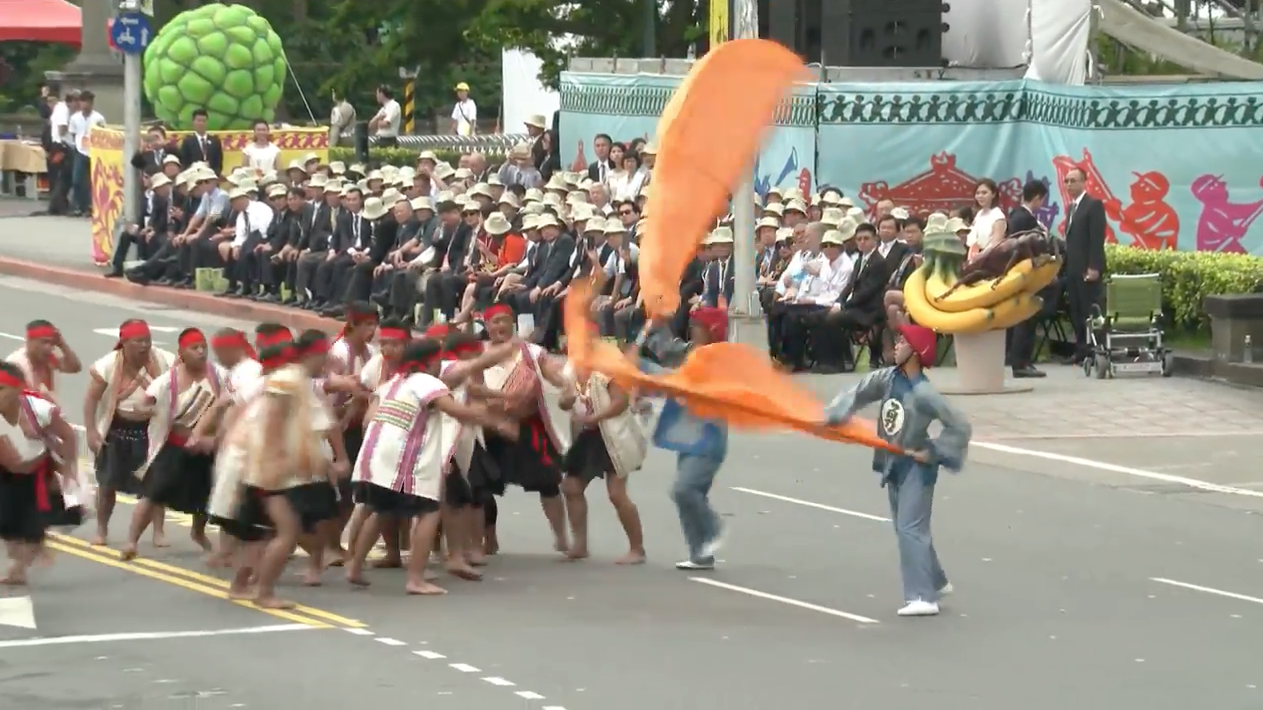 Indigenous being driven out by Qing. Photo credit: Presidential Office

Subsequently, the arrival of the Qing in Taiwan was a sudden and odd tonal shift in the performance. The Qing’s conflicts with indigenous were depicted without commentary and the performance suddenly shifted to representing traditional Chinese culture by way of acrobats, dragon and lion dances, and the like. Emphasis was placed on the Mazu cult, however, the worship of the sea goddess Mazu being quite strong in Taiwan as compared to parts of China. Emphasis was also placed on Hakka culture as another form of culture which existed in Taiwan outside of just Han culture and the presence of the Miao in Taiwan, but the depiction of Hakka was also problematically stereotypical, with reference to the Hakka as the “Cute Hakka People” (可愛的客家人) and the Hakka language as the “Cute Hakka Language” (可愛的客家話). 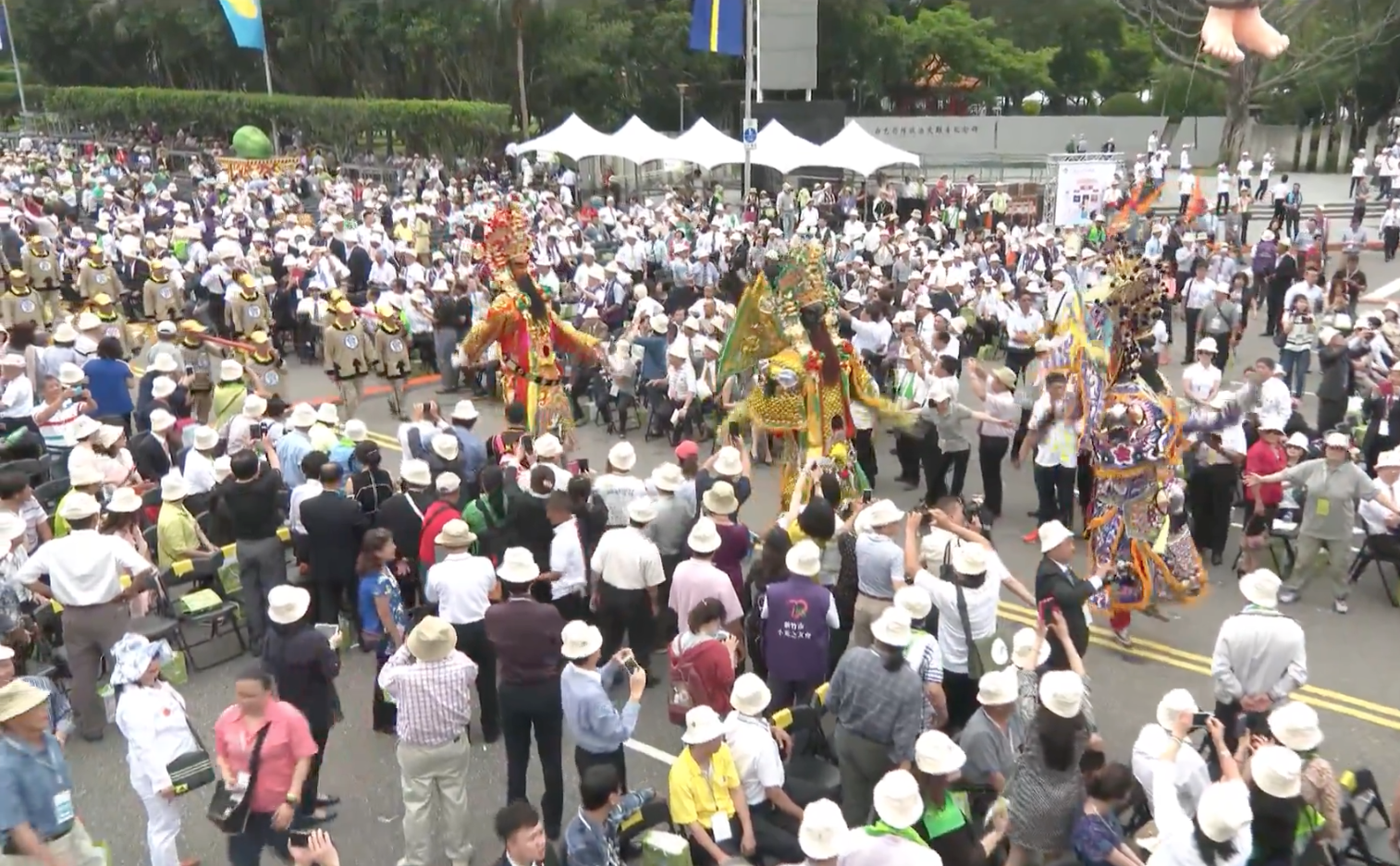 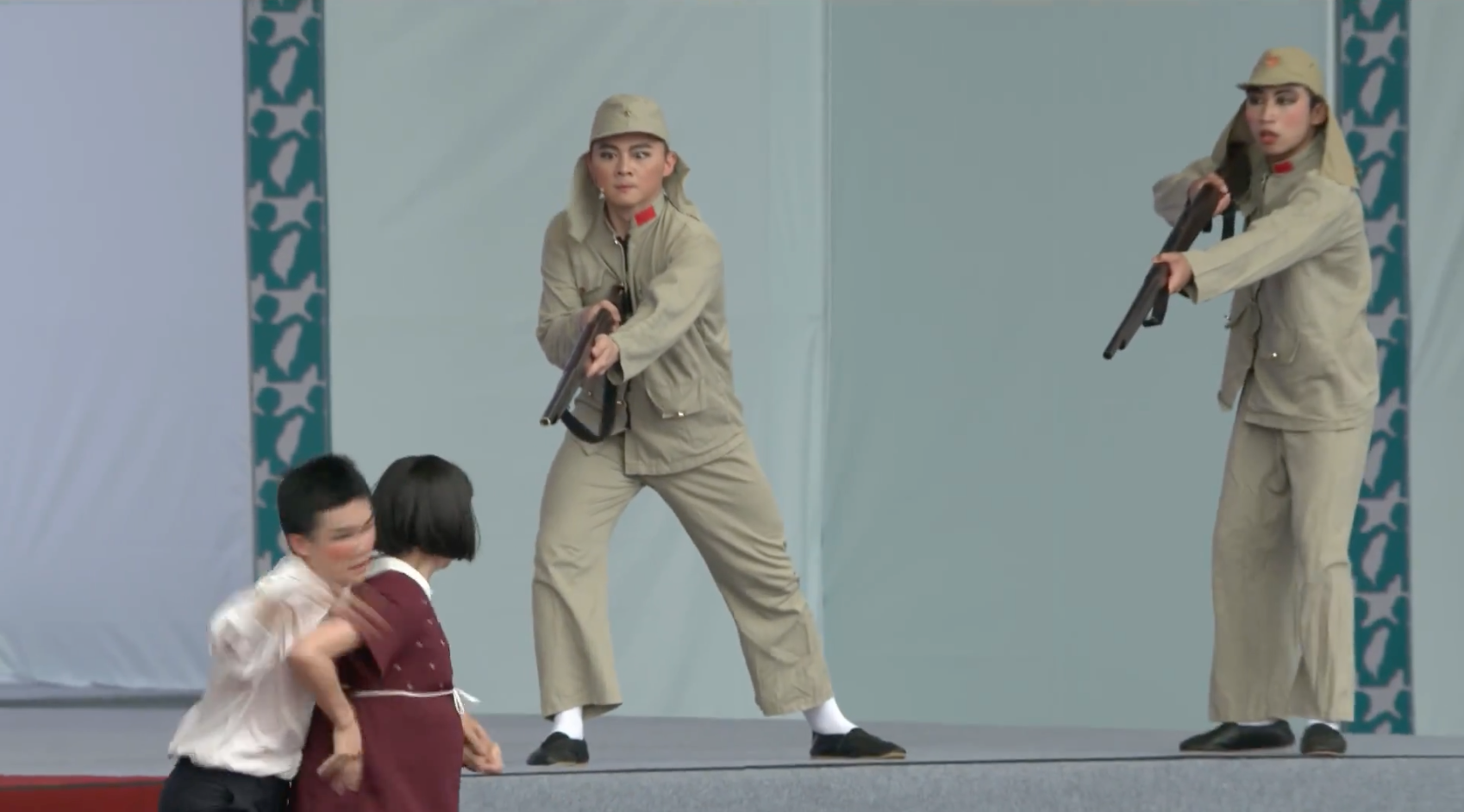 This was at contrast to the pan-Green camp’s rosy, nostalgic view of Japanese colonization as having been a preferable period to Taiwan under the KMT’s authoritarian rule and more closely resembles the KMT’s traditional antipathy towards the Japanese by way of Chinese nationalism. The depictions of indigenous as “heroes of the war against the Japanese” would also be to subsume them to the antipathy against the Japanese of KMT ideology. Taiwanese were otherwise represented as sent off to fight under the Japanese by force, with families split up, and forced to change their surnames through policies of assimilation. 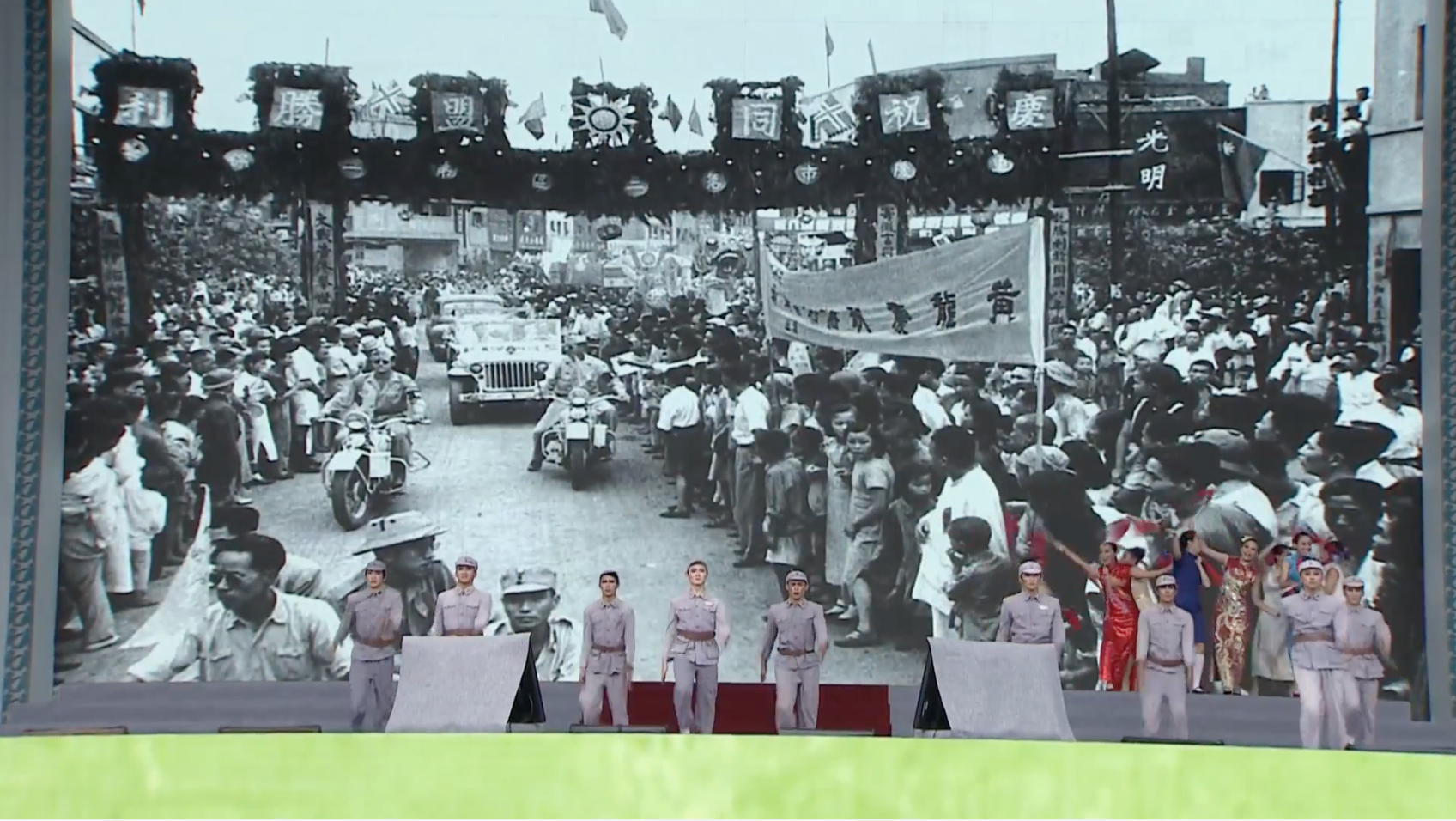 The arrival of the KMT, depicted in a wholly positive light. Photo credit: Presidential Office

Thus, the coming of the KMT government would depicted in wholly positive light as the liberation of Taiwan from Japanese rule. Evidently, it would still be too politically controversial to depict the coming of the KMT anything other than positive, given the continued existence of the KMT today as a political party in Taiwan. As a result, the depiction of the 228 Massacre would be an abrupt transition in the performance, represented as another period in which the Taiwanese people experienced a period of suffering but without any clear explanation as to the source of that suffering. Again, even if KMT troops were shown as killing Taiwanese people in the performance and there would be reference to the White Terror as having occurred under the KMT government, it would be too directly political to point the KMT as the perpetrator of the 228 Massacre and White Terror. 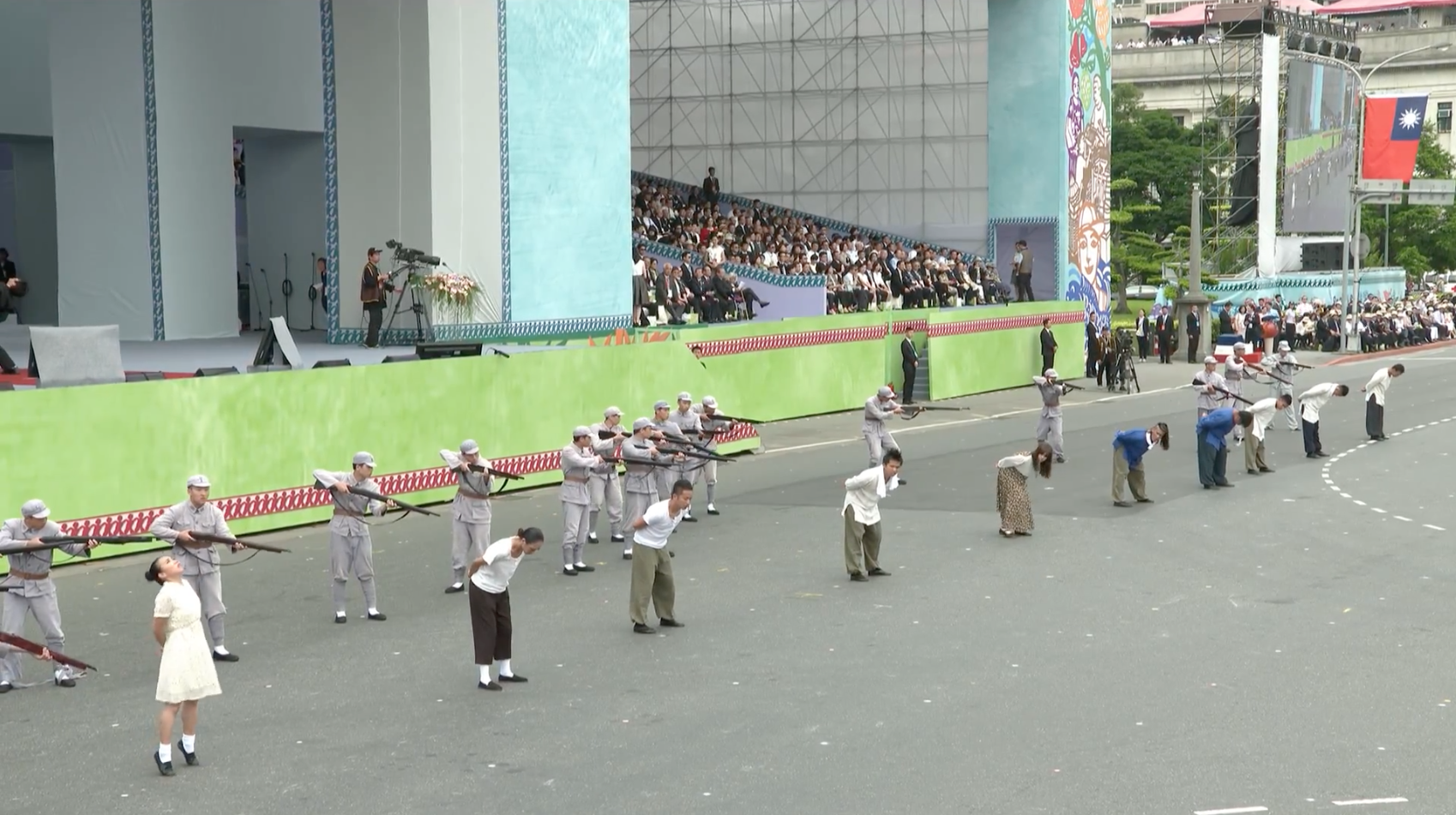 As it to make up for that this reference to the KMT’s past crimes in any form would already be still too political, the performance then attempted to point towards the flourishing of entertainments and the improvement of quality of life in Taiwan which also came with the KMT government in the 1950s and 1960s. The 1970s, then, would be depicted as a period in which folk songs became popular as a result of the successes of transitioning from an agricultural to commercial society, with Taiwan becoming one of the Four East Asian Tigers. Folk singers on campuses were depicted as expressing the sentiments of young people, seeing as young people in Taiwan no longer had to struggle so hard to survive, neglecting any political dimensions to the folk song movement in Taiwan. This included, however, a rather chauvinistic depiction of young female college students fighting over a male singer. 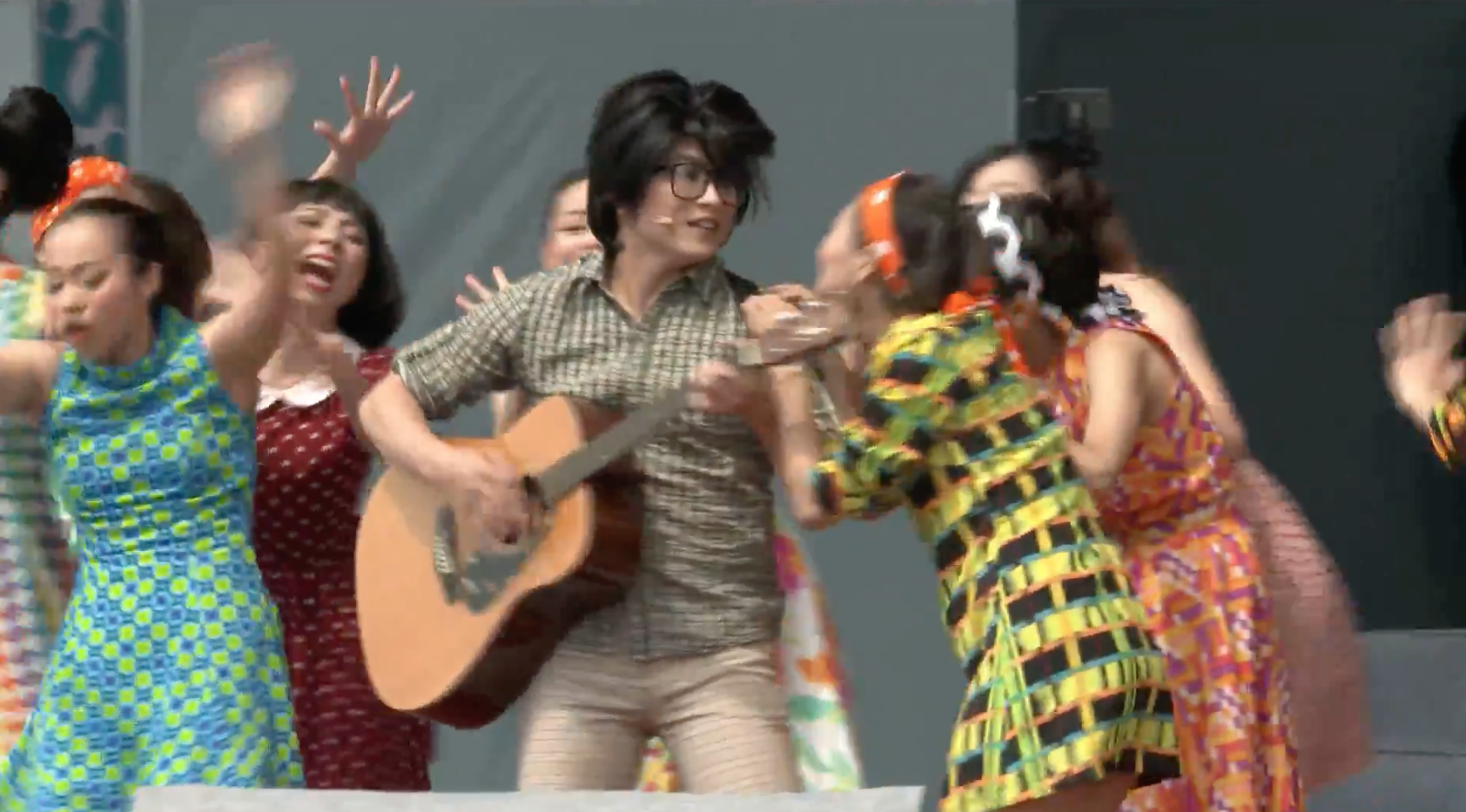 Perhaps one of the most strikingly bizarre parts of the performance would be the depiction of Taiwan being driven out of the UN and breaking connections with Taiwan— referenced in the narration—but with a quick attempt to redirect to attention Taiwan’s successes in baseball internationally as if to make up for that Taiwan was no longer part of the UN. The influx of immigrants from Southeast Asia during this period would be represented through a performance of Vietnamese traditional culture, presumably with Vietnam standing in for all of Southeast Asia—ironic given present protests against Taiwanese-owned companies in Vietnam. Reference was made to the diversification of Taiwanese society, with recent statistics showing that one-third of Taiwanese children in the present have a foreign parent, and framing this in relation to the continued cultural hybridization of Taiwan. 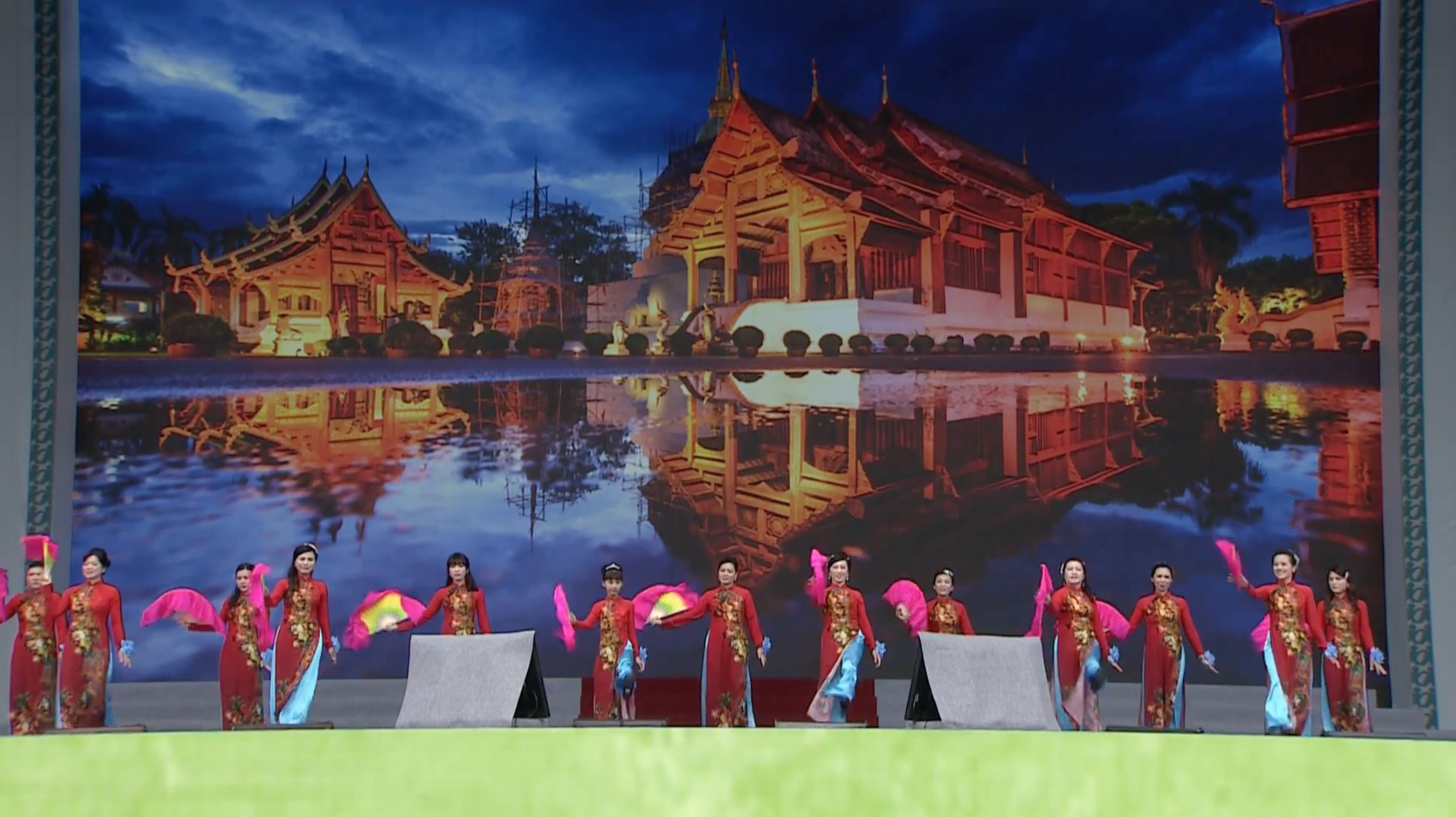 Lastly, “Island’s Light” concluded with all the performers coming on stage, along with balloon animals and dancing anthropomorphic depictions of Taiwanese food, such as bubble tea. Overall, the depiction of the Taiwanese people within the narrative of the performance fit the pan-Green narrative of Taiwan as having faced different forms of colonization and the Taiwanese people as having suffered and endured through this. Yet the overlap onto KMT official history would gesture towards the challenges of the Tsai administration, caught as it is within the Republic of China framework. 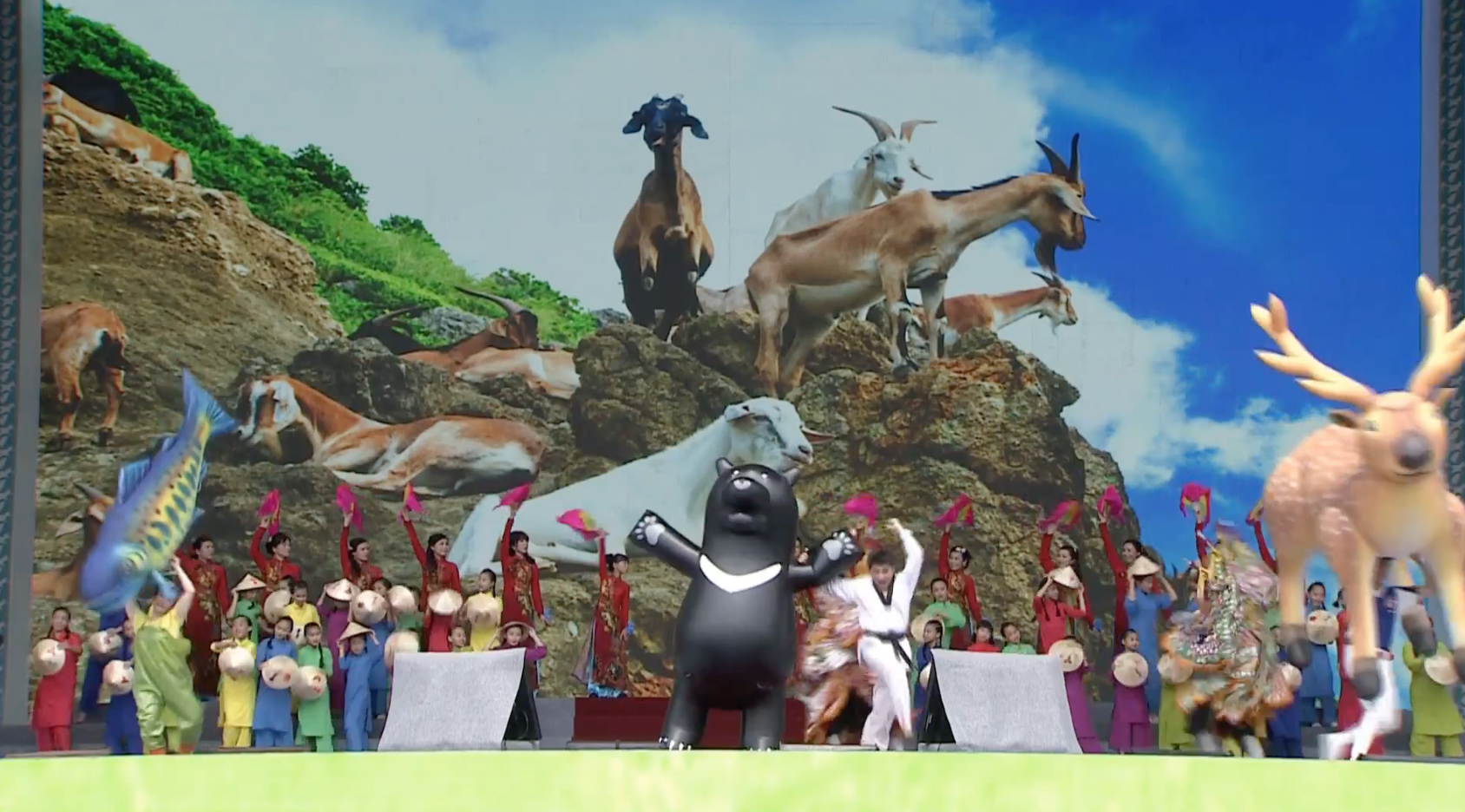 Notably, the performance omitted Taiwan’s democracy movement, which would have still been too controversial. It was stated that the three musical performances before Tsai’s speech, from indigenous singer-songwriter Panai Kusui, Hakka singer-songwriter and anti-nuclear activist Lin Sheng Xiang, and rock band Fire EX, the band which wrote and performed “Island’s Sunrise”, the unofficial theme of last year’s Sunflower Movement. In this, there would be the attempt to link the incoming Tsai administration to Taiwan’s past few years of social movements, with the use of Sunflower iconography. But this was an evasion of Taiwan’s history of democratization nonetheless. 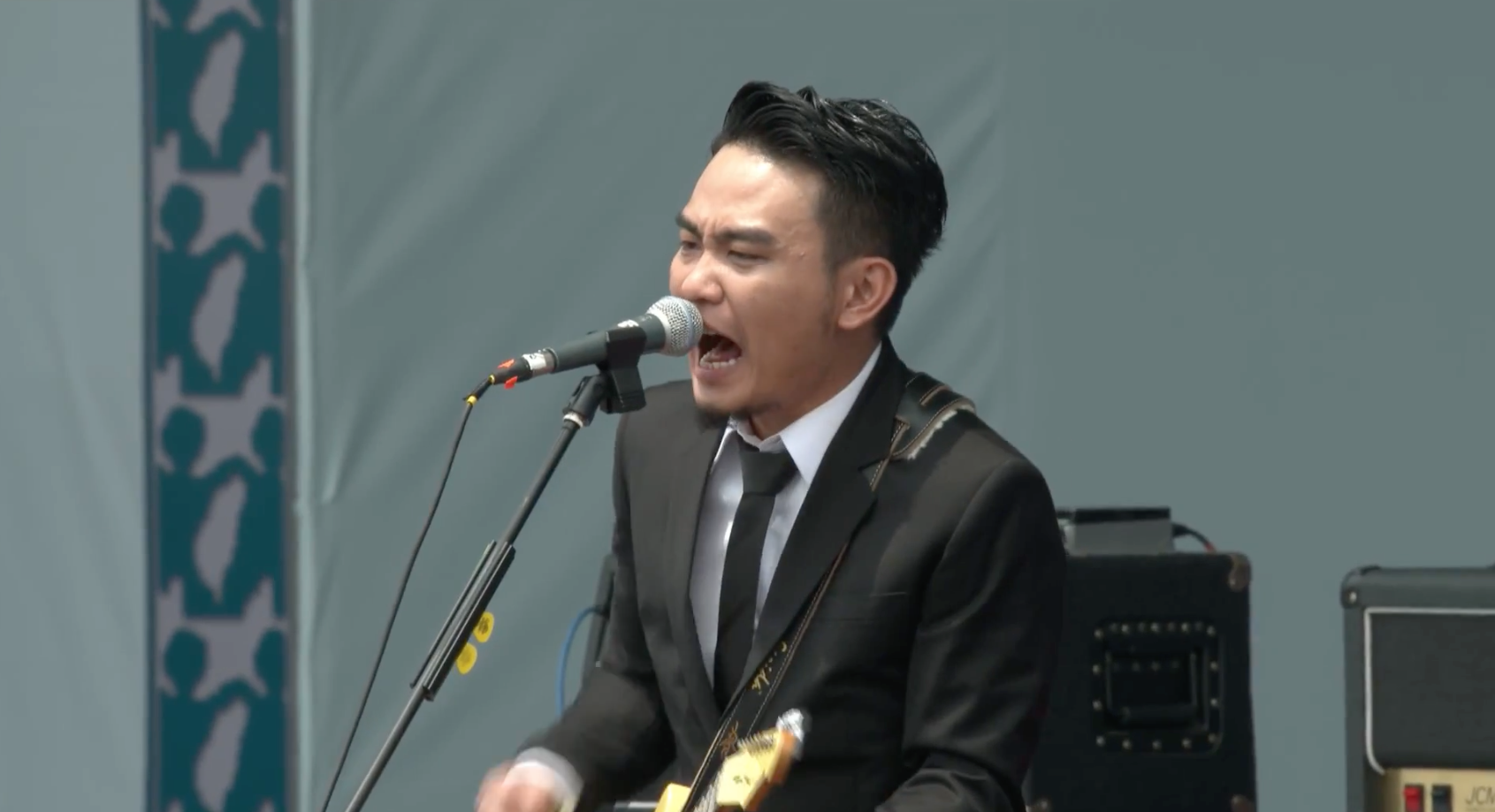 If some have pointed out that the performance ended with the singing of “Meilidao,” a song banned during the martial law period, or that the national anthem was sung by an indigenous children’s choir, this was counterbalanced by that the overall proceedings still took place within the framework of Republic of China pageantry with military displays and the like. In singing the national anthem, netizens were quick to zoom in that Tsai sung the lyric to “the party” within the anthem, a reference to the KMT. Criticism, too, has followed from that despite Tsai’s promises of policy to aid indigenous people, the depiction of indigenous people within the performance would undermine her claim to understand the needs of indigenous people. And if Tsai has promised to redress transitional justice and the past crimes of the authoritarian periods, there was generally a failure to confront Taiwan’s authoritarian past in the performance. 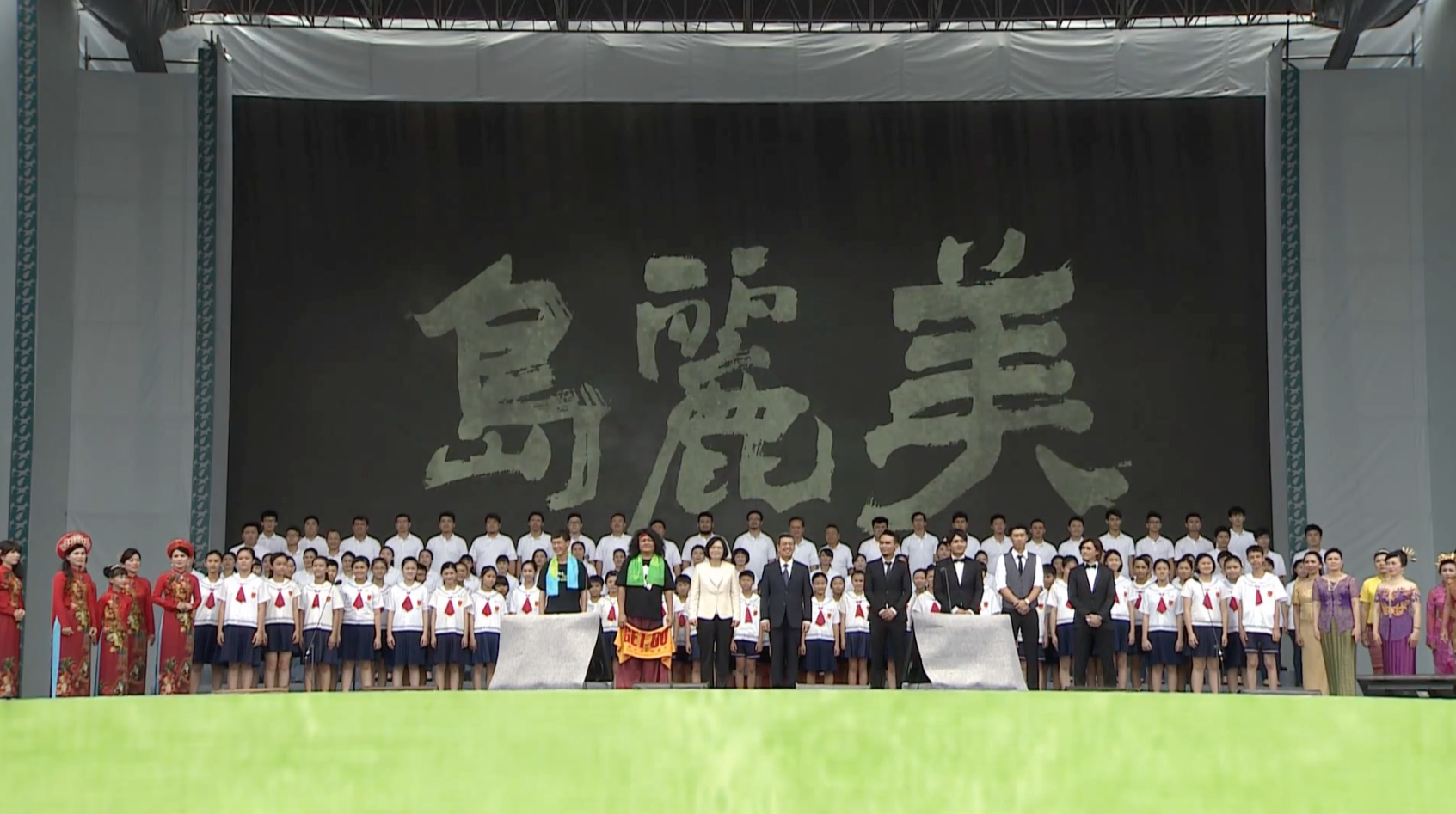 And so, as with the performance of “Taiwan’s Light,” it will be see as to whether this is the fate of the Tsai administration—the overlap of the DPP onto KMT institutions and failure to get beyond the grip of KMT ideology on Taiwan’s governmental institutions in a manner which only demonstrates that the new boss will only be the same as the old boss.