Demonstrations Against The Parade And Assembly Act

A DEMONSTRATION against the long-hated Parade and Assembly Act took place outside of the Legislative Yuan yesterday morning, with demonstrators vowing that they would not leave until their demands were met. Though not a very large protest and though the action eventually ended, this marks the Parade and Assembly Act becoming another issue in which Taiwanese civil society and youth activists are running up against the current DPP administration regarding. Participating groups included Youth Against Oppression, the Judicial Reform Foundation, and the Taiwan Higher Education Union. At least some conflict with the police occurred during the demonstration. 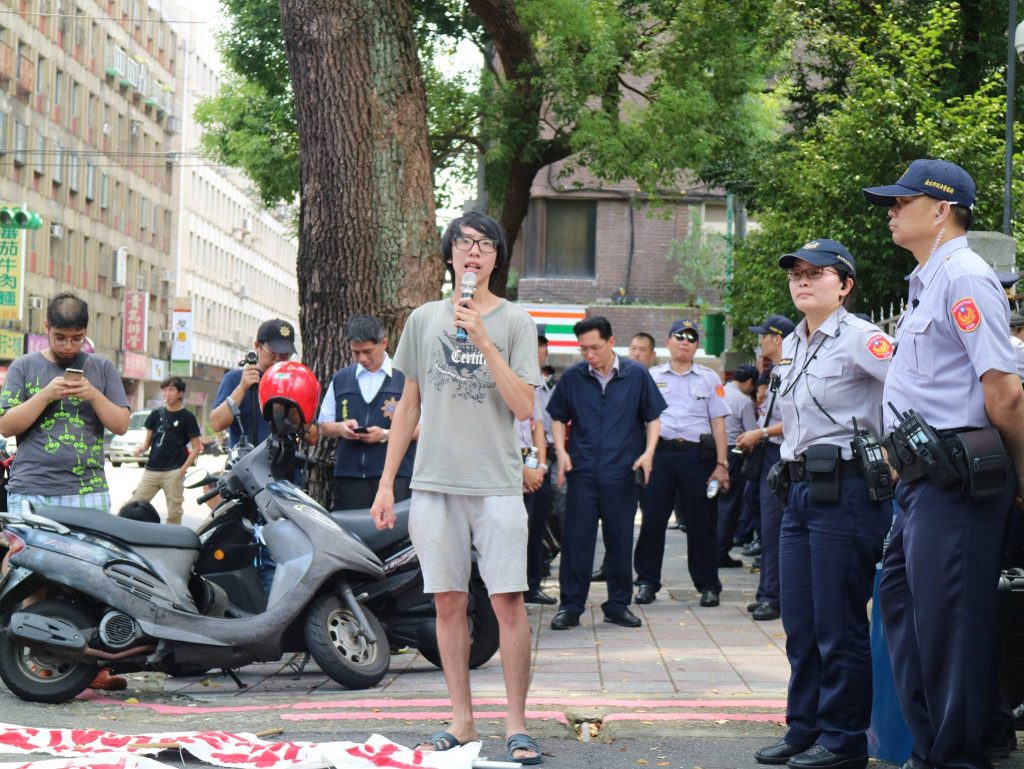 The Parade and Assembly Act has historically been much reviled as a law restricting freedom of gathering in Taiwan, a holdover from the authoritarian period which allows police to crack down on political demonstrations. The act requires legal notification of protests to the police ahead of time, in order to restrict spontaneous demonstrations, in a manner seen as overly restrictive as compared to laws in the US and Europe, as well as international law. Protests are also restricted near certain government buildings and police are allowed cancel demonstrations if they decide to. Likewise, the Parade and Assembly Act also restricts free speech, restricting speech that is pro-Taiwanese independence or pro-Communist, though in practice this is rarely enforced. It is sometimes suggested by legal scholars and activists that the law is unconstitutional in nature.

No less than Ma Ying-Jeou of the KMT would promise to revise the law before coming into office, although after his administration saw protest from Taiwanese civil society and youth activists, changes to the Parade and Assembly Act were not made and efforts were made to expand the purview of the law. In particular, the Parade and Assembly Act flared up as an issue after the use of police violence following the visit of 2008 visit to Taiwan of Chen Yunlin, head of the semi-official Association for Relations Across the Taiwan Straits organization responsible for China’s dealings with Taiwan. As a result, changes to the Parade and Assembly Law were a demand of the 2008 Wild Strawberry movement occupation of Liberty Plaza in Taipei. In subsequent years—though not without some legal pushback—the Parade and Assembly Act would continue to be used as a means to crack down on protest, such as during the Sunflower movement and Ministry of Education occupation. 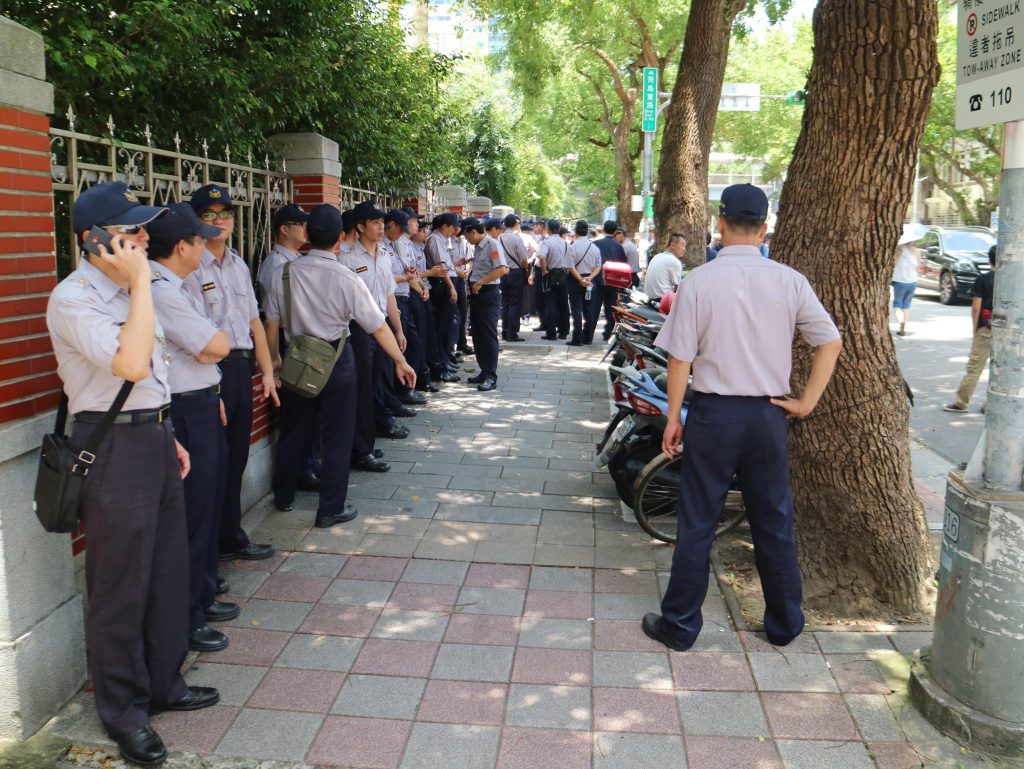 Yet while under a KMT administration, members of the DPP would call for changes to the Parade and Assembly Act, what is currently being demonstrated is planned changes under the Tsai administration seen as insufficient in nature or in fact expanding the powers of the Parade and Assembly Act. Namely, reforms are seen as leaving the strength of the act about the same as it is now or even expanding the powers of the act. This is by not only maintaining restriction zones for protest on the residences of the president and vice-president, but creating mobile restriction zones that travel around with the president and vice-president when they travel.

In part, protest against the present DPP administration is because the DPP’s insufficient reforms to the Parade and Assembly Act is seen as part of the backsliding of the DPP on key issues such as transitional justice, oversight over cross-strait bills with China, and nuclear energy. However, it would also be that the DPP is seen as possibly wanting to retain the Parade and Assembly Law due to the possibility of protests against it. Wellington Koo of the DPP, for example, would take to Facebook to argue with netizens in favor of protest restriction zones. Indeed, to that end, during the protest, protestors carried a chart with pictures of legislators that indicated their stance on the Parade and Assembly Act, the same picture of which was also circulated online. 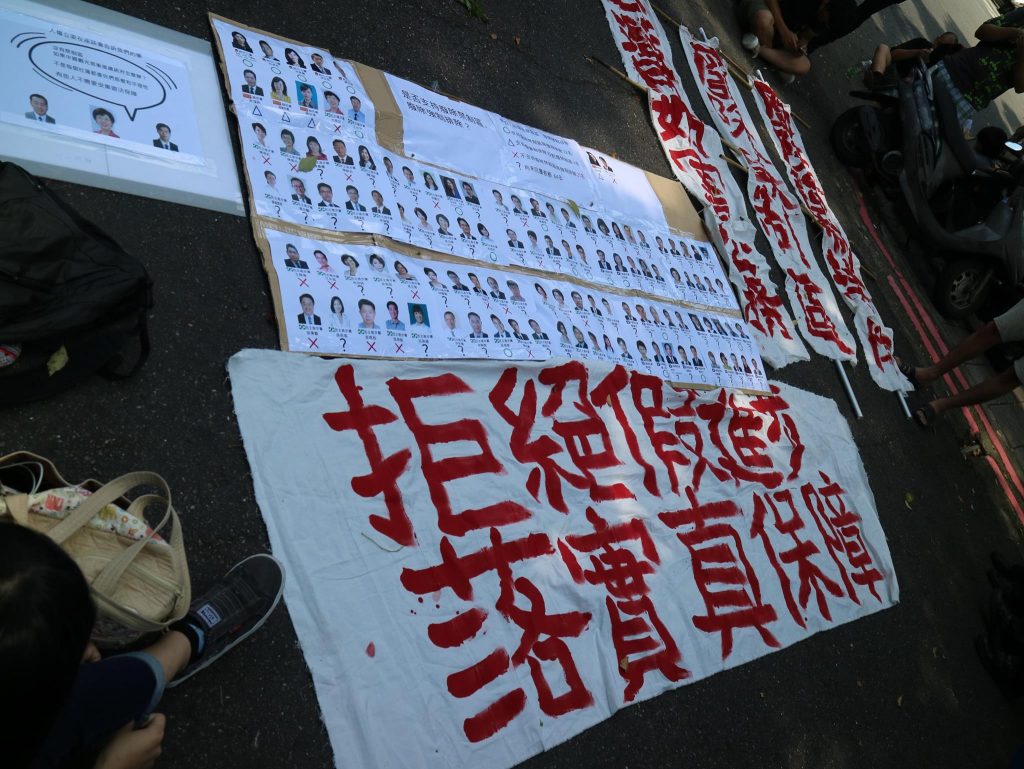 Chart with pictures of legislators indicating their stance on the Parade and Assembly Act. Photo credit: William Tsai

With a showdown looming in the Legislative Yuan at present regarding transitional justice legislation, it does not appear that the Parade and Assembly Act will be discussed in the current legislative session. But will see as to future responses from the Tsai administration, seeing as the Parade and Assembly Act is now another issue dating back from the Ma administration which Tsai is now being challenged on—the question being whether she will continue with Ma administration policy or break with it. And having already continued Ma administration policy on some issues, this may become an increasing source of tension between Tsai and youth activists, as well as with her general support base writ large.