THIS AFTERNOON saw a demonstration and the performance of traditional dances by Taiwanese indigenous and their allies on Ketagalan Boulevard, in front of the Presidential Office Building. According to organizers, 186 individuals were in attendance, although the event was notably lacking in media coverage with the presence of only a few journalists and the absence of any television crews. 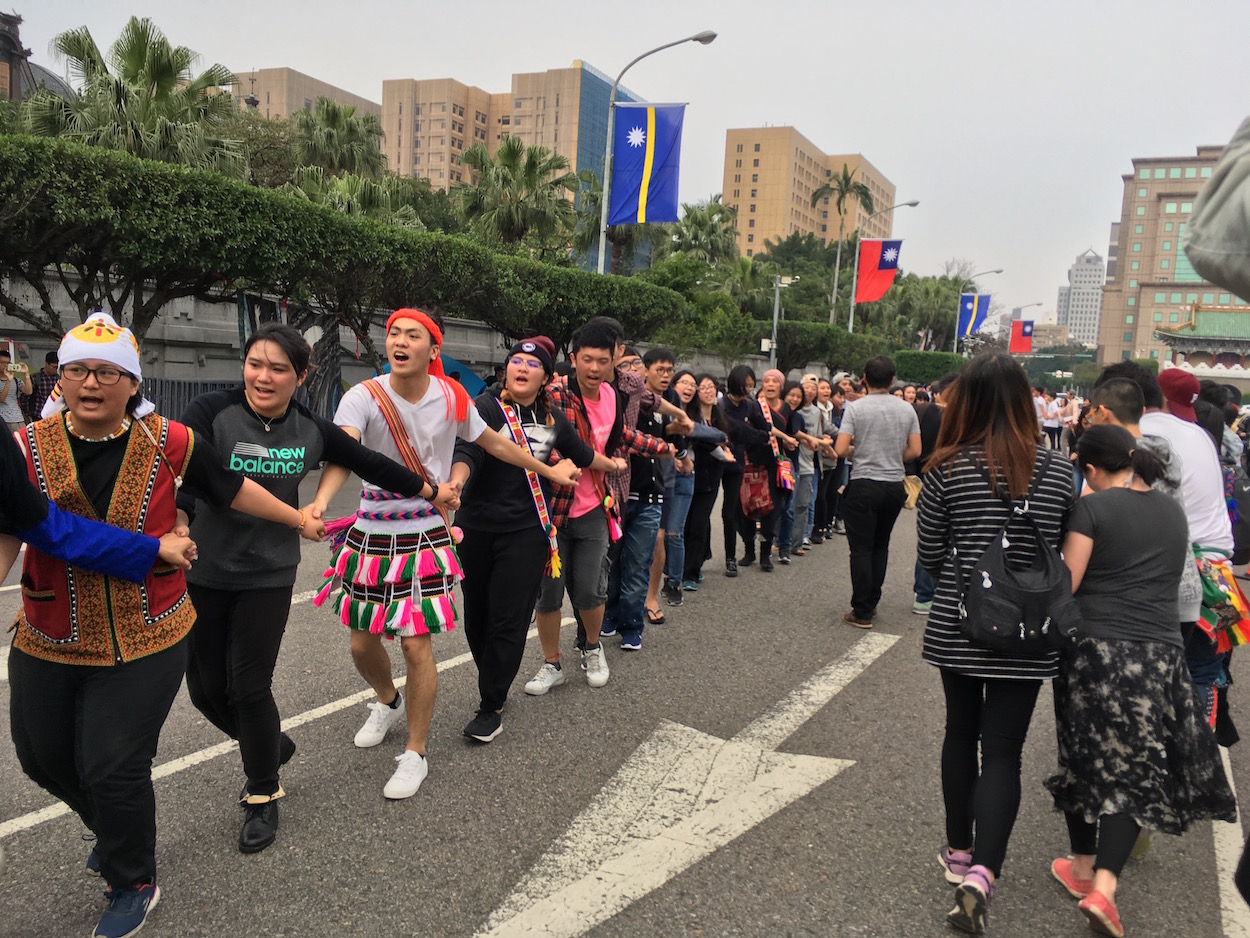 In particular, efforts aimed at realizing transitional justice for indigenous appear to only be for show, as the task force created by Tsai Ing-Wen to realize transitional justice for indigenous primarily a research body into past crimes committed against indigenous rather than a body with the power to carry out action. Even then, this task force has no budget, and no permanently appointed members. 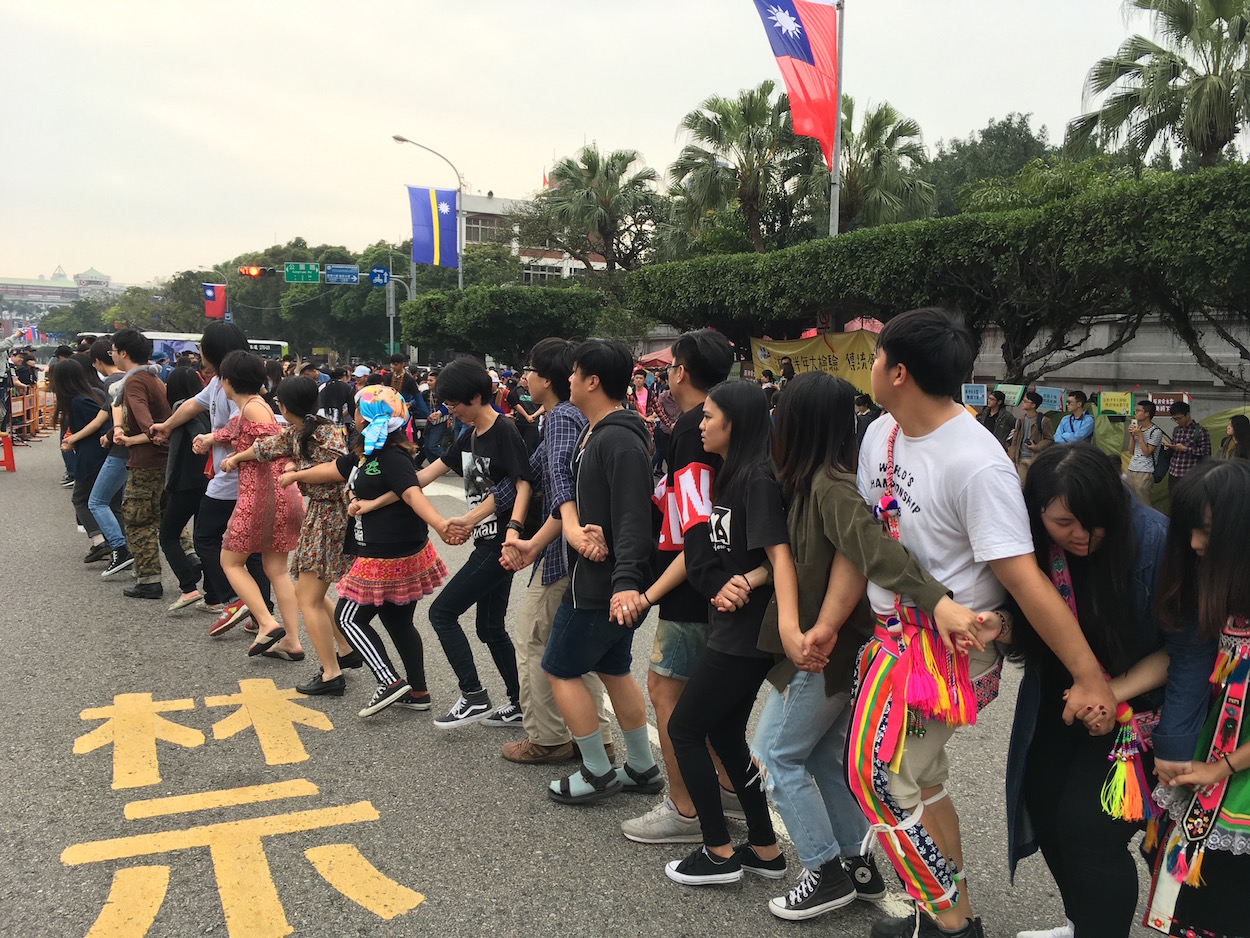 Taiwanese indigenous more broadly face the problem that government bodies are oftentimes only for show. For example, the Council For the Implementation of the Indigenous Peoples Basic Law only meets three times a year, raising large questions about the Taiwanese government’s commitment to the Indigenous Peoples’ Basic Law. As observed in the Tama Talum case, in which an indigenous hunter was arrested for poaching in spite of the fact that the law should defend the rights of indigenous to hunt as part of traditional indigenous practices and culture, there are also remain severe problems with how laws are put into practice by authorities.

With regard to the present, the issue at hand is that while the Tsai administration promised to restore traditional lands, it excluded private property from what was designated as indigenous land in the draft proposal which was put out by the Council of Indigenous Peoples. As a result, while indigenous estimated their traditional territories to consist of 1.8 million hectares, only 800,000 hectares were designated by the government as traditional indigenous territories. Criticisms of the government process for drawing up the boundaries for traditional indigenous territory have been longstanding, seeing as indigenous themselves, who should know the land best and whose land it is to begin with, have often not been consulted. 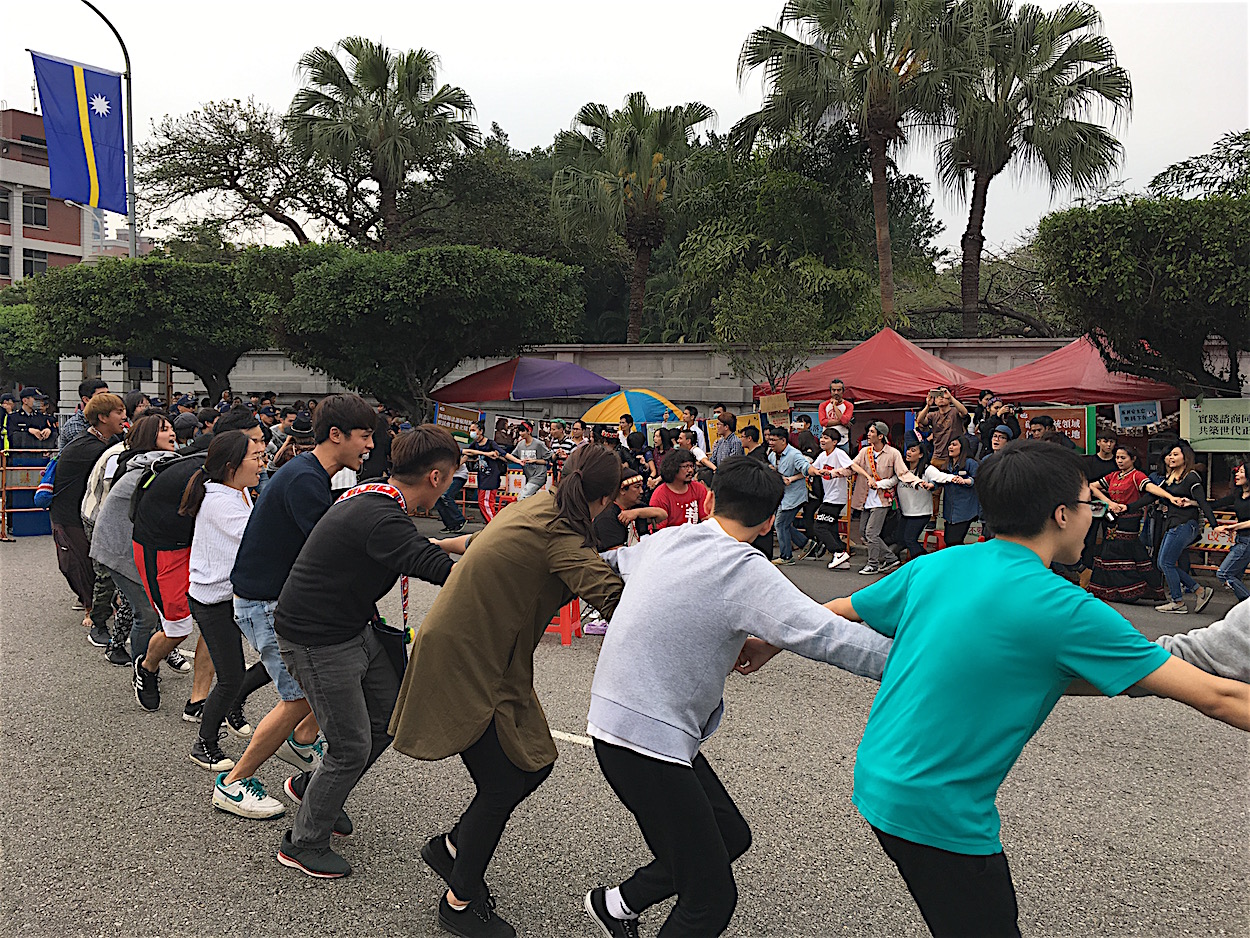 Demonstrations have raged on for 11 days, as of today, led by indigenous activists such as Panay and famed documentary filmmaker Mayaw Biho, with indigenous demonstrators camping along the side of Ketagalan Boulevard in front of the Presidential Office Building, sometimes harassed by police at night. February 28th, which is commemorated yearly in Taiwan after the 228 Massacre which took place on that date in 1947, saw demonstrations from indigenous groups calling attention to their plight as one which also needs to be resolved as part of broader attempts to realize transitional justice in Taiwan.

As argued for by indigenous, transitional justice for the victims of 228 is meaningless without also transitional justice for the crimes committed against indigenous people in Taiwan’s 400 years of Han settlement, in order that transitional justice can be realized for all members of Taiwan’s multiethnic society. As such, indigenous demonstrators collaborated and also participated in 228 commemoration activities such as Gongsheng Music Festival, Taiwan’s largest 228 commemoration event, which is primarily youth organized. Indigenous demonstrators protesting the traditional territories issue are primarily young people, much as with other Taiwanese youth activists as the organizers of Gongsheng Music Festival. 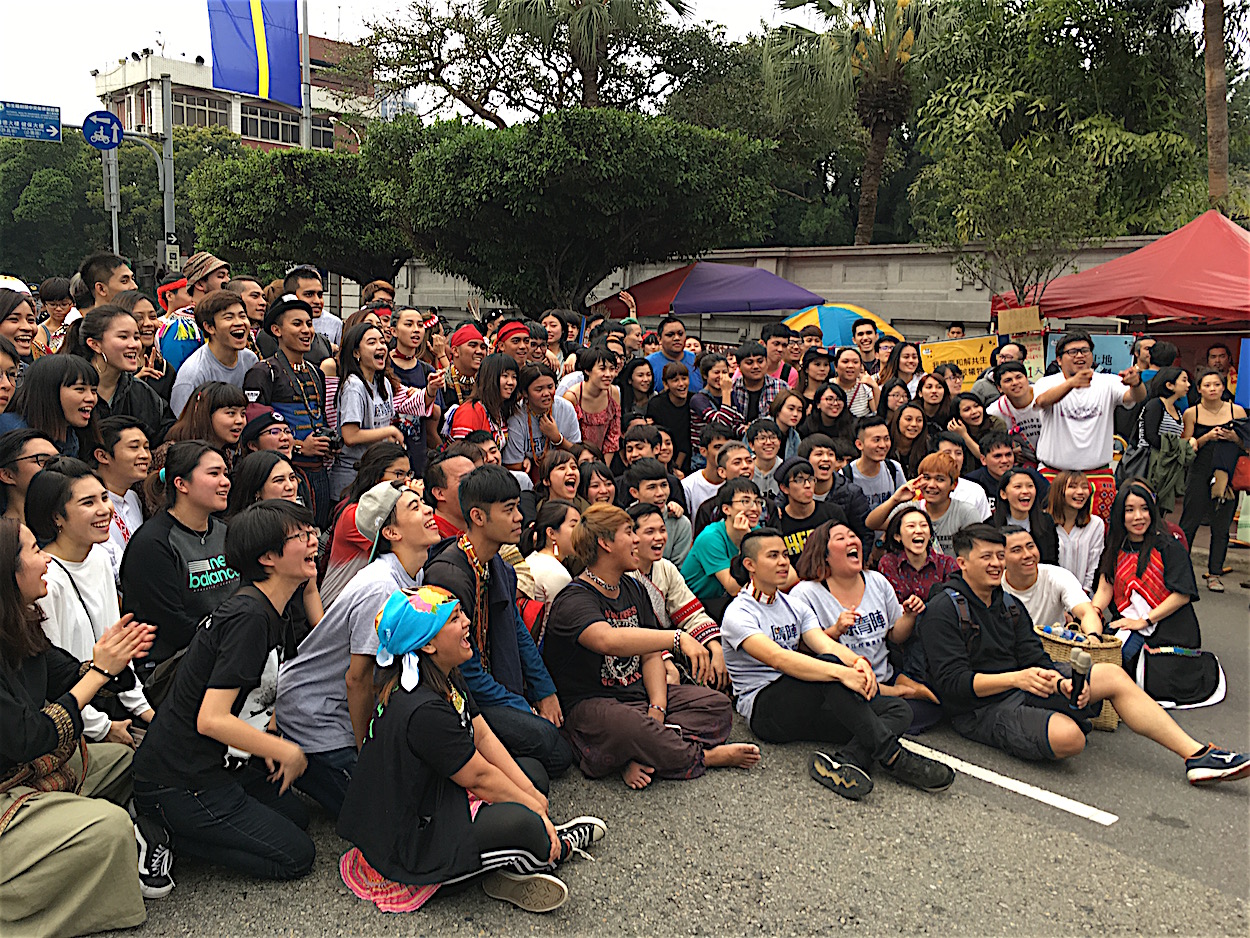 This is not the first occupation by indigenous on Ketagalan Boulevard demonstrating the Tsai administration’s failure of action on traditional indigenous territories in the months since Tsai’s apology. However, it also seems quite likely that the Tsai administration will do its best to shrug off indigenous protests, or claim that its actions to date are enough, and that the indigenous community is, at best, asking for too much or, at worst, seeking to drive ethnic Han off of Taiwan. As a result, indigenous have had to assert many times that they are not seeking to drive ethnic Han from Taiwan and to make them “jump in the sea”, but merely the restoration of their basic rights. Moreover, as Sunflower Movement leader Lin Fei-Fan noted in a widely circulated essay explaining the reasons for his support of the indigenous community, very likely the Tsai administration and DPP will point to the fact that traditional indigenous lands were increased from zero to 800,000 hectares to assert that it has taken action on indigenous issues and to distract from the fact that some 1,000,000 hectares have not been returned to indigenous.

It is a possibility that the Council of Indigenous Peoples’ draft proposal will encounter resistance in legislature from indigenous legislators and their allies, whether DPP, KMT, or NPP. Although an awkward situation for DPP indigenous legislators, seeing as it is their party which is fronting the bill, DPP indigenous legislators as Chen Ying have voiced opposition to the current draft proposal. On the other hand, as the party closest to Taiwanese civil society, the NPP has voiced opposition to the Tsai administration’s reversals of course on indigenous transitional justice multiple times. And, apart from that the KMT also has its fair share of indigenous legislators who oppose the draft proposal, the issue is one that the KMT will likely opportunistically leap onto as a way to attack the DPP—never mind the countless historical crimes committed by the KMT against Taiwanese indigenous during the authoritarian period. In general, for political parties, it must be remembered that, especially compared to other countries with indigenous populations, consisting of two percent of the population, Taiwanese indigenous constitute a substantial part of the population, and so political parties may also be hoping to win the indigenous vote in future elections. 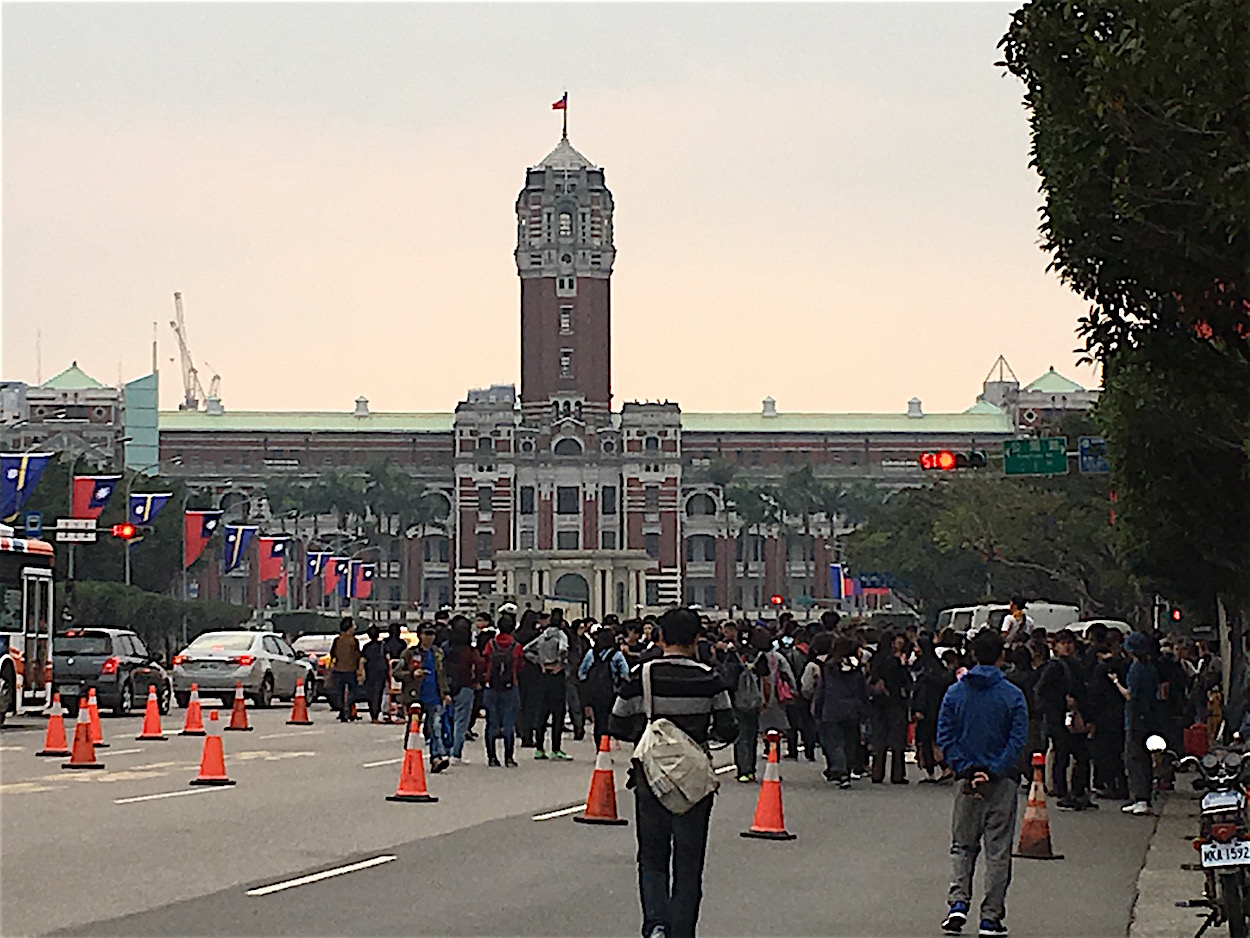 As for indigenous groups themselves, as also pointed out by Lin Fei-Fan in his essay, indigenous groups have in past months mostly stuck to the tactic of occupying Ketagalan Boulevard in a stationary manner, with fewer attempts to organize mobile actions such as marches in other parts of Taipei. A change in tactics may be worth pondering for indigenous activists. In the near future, continued stalling by the Tsai administration is likely. Nevertheless, protests do not look as if they will stop anytime soon, nor will the issue go away, with the possibility of future, larger mobilizations by indigenous communities on the horizon once the current legislative recess ends and the draft proposal comes under discussion within legislature.