Calls For The Release Of Lee Ming-Che 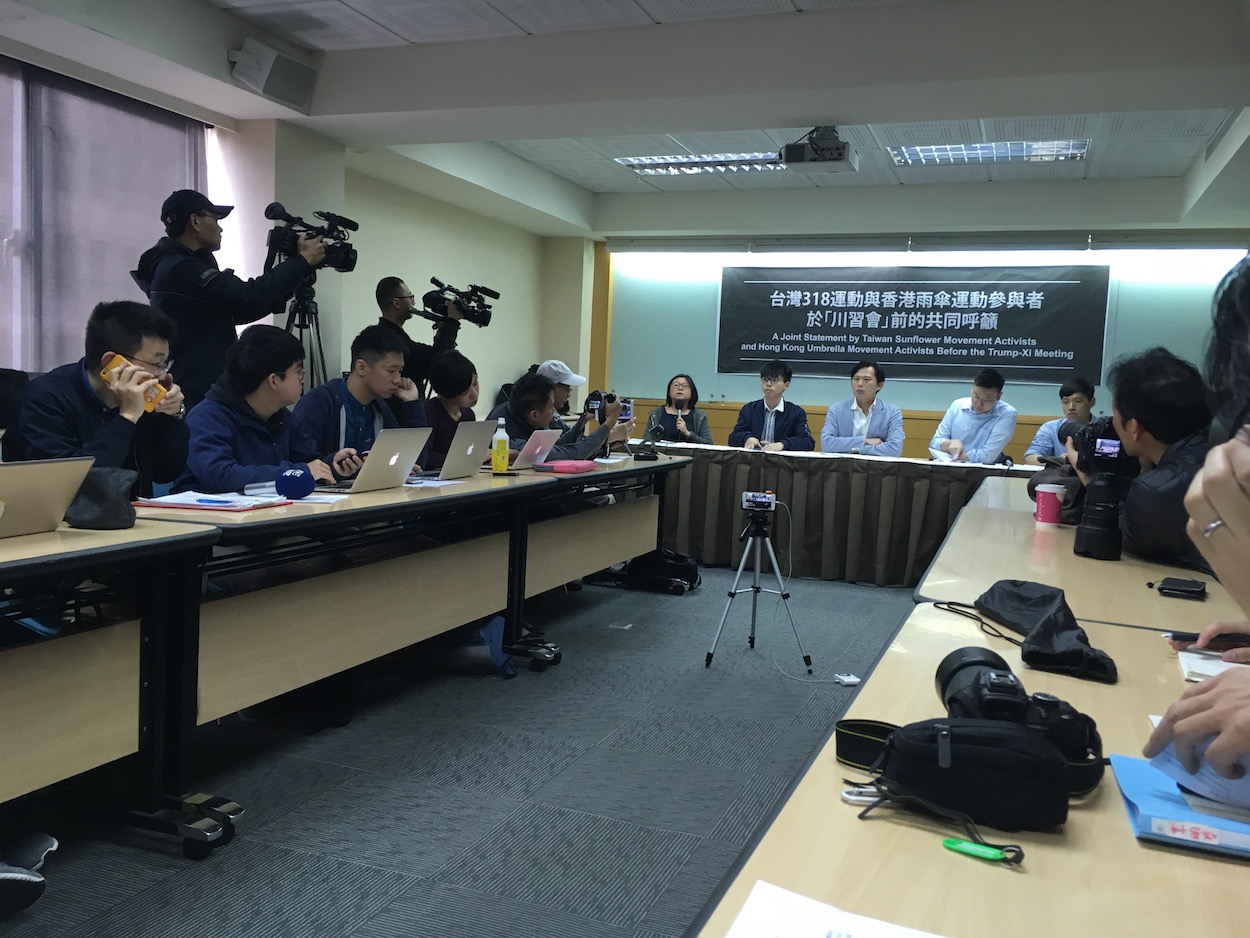 Shortly before the beginning of the press conference. Photo credit: Brian Hioe

Though international media was, strangely, rather lacking in attendance, the event is likely significant as a rare collaborative effort between Umbrella Movement activists and Sunflower Movement activists with both sides lending each other their prestige in order to make the event one which more members of the press and general public would pay attention to. While it is obviously in the shared interests of Sunflower Movement and Umbrella Movement activists to partner together in resistance to China’s encroachment on the sovereignty of both Taiwan and Hong Kong, it is rare for both sides to be able to directly work together. Apart from being able to hold events such as joint conferences to reflect on the situations of both Taiwan and Hong Kong, geographic distance makes it hard between both Taiwan and Hong Kong to collaborate in a more hands-on manner. However, by coincidence, Joshua Wong happened to be in Taiwan for an interview, which was what made today’s joint press conference possible.

In their jointly released statement, both sides stated that China’s unlawful detention of Taiwanese human rights advocate, NGO worker, and former DPP staffer Lee Ming-Che on vague charges of “endangering national security” is highly concerning, pointing to that the timeframe of Lee Ming-Che’s detention occurred quite close to the sentencing of Chinese human rights advocates from Guangzhou who had expressed support of the Umbrella Movement. Lee’s detention was also situated in context of China’s crackdown on human rights advocates and human rights lawyers in recent times, and tightening restrictions on foreign NGOs working in China. It may be noteworthy to observe in this statement that Lee’s detention was asserted in context of China’s treatment of foreign human rights NGOs and cross-strait agreements on handling crime signed between Taiwan and China, with Lee described as the first NGO worker to be arrested under this law. Nonetheless, due to China’s claims of sovereignty over Taiwan, it is possible that China may consider Lee to be a Chinese citizen subject to Chinese laws. Indeed, China has not to date clarified why exactly Lee was arrested, nor where he is being detained, and refused to allow legal representatives access to Lee. 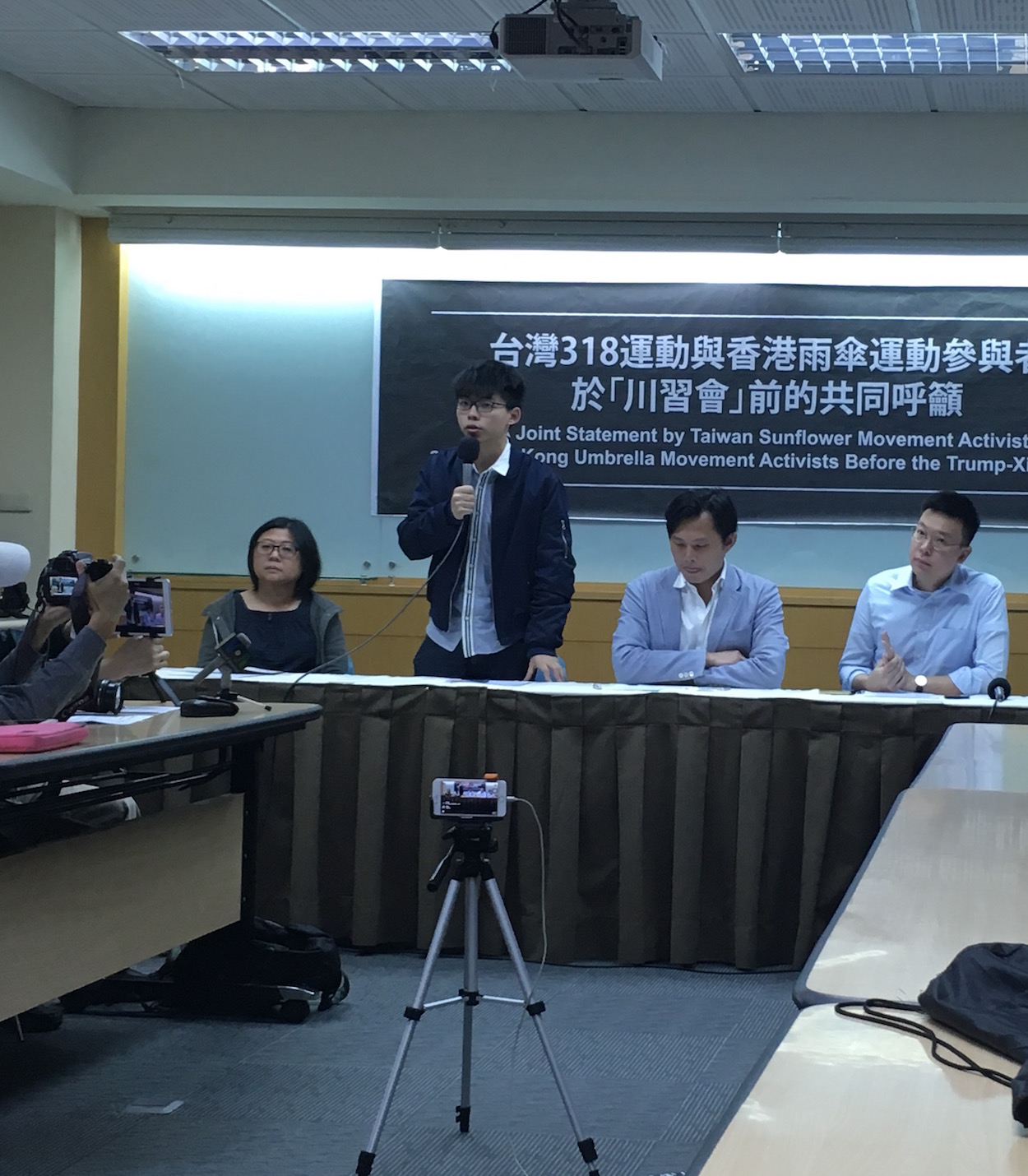 As explained during the press conference by Chen Wei-Ting, the initial impetus for the joint statement came after he, Lin, Huang, and other Sunflower Movement activists were acquitted of all charges related to the Sunflower Movement occupation of the Legislative Yuan by the Taipei District Court. That afternoon, Lee Ming-Che’s wife, Lee Ting-Yu, held a press conference declaring that she would go to China in the next few days in order to plead for being allowed to see her husband, forfeiting the right to legal council in doing so. And so after observing Lee Ting-Yu’s emotional appeal, Chen, Lin, Huang, and others began to consider means of taking action to intervene.

Part of what would compel Sunflower Movement leaders as Chen, Lin, and Huang to take action seems to be the fact that the DPP has not taken a particularly strong stand on the issue for fear of damaging cross-strait relations, given the deterioration of relations with China which has taken place since the Tsai administration took office. Again, Sunflower Movement activists are hardly happy with the backsliding of the DPP in the year since it took office, even failing to pass the cross-straits oversight agreement which was a central demand of the Sunflower Movement. Today’s press conference comes after a similar press conference yesterday by 18 civil society groups calling on the DPP to take a stronger stand regarding Lee’s detention which was held yesterday in the same location at the National Taiwan University Alumni Hall, . 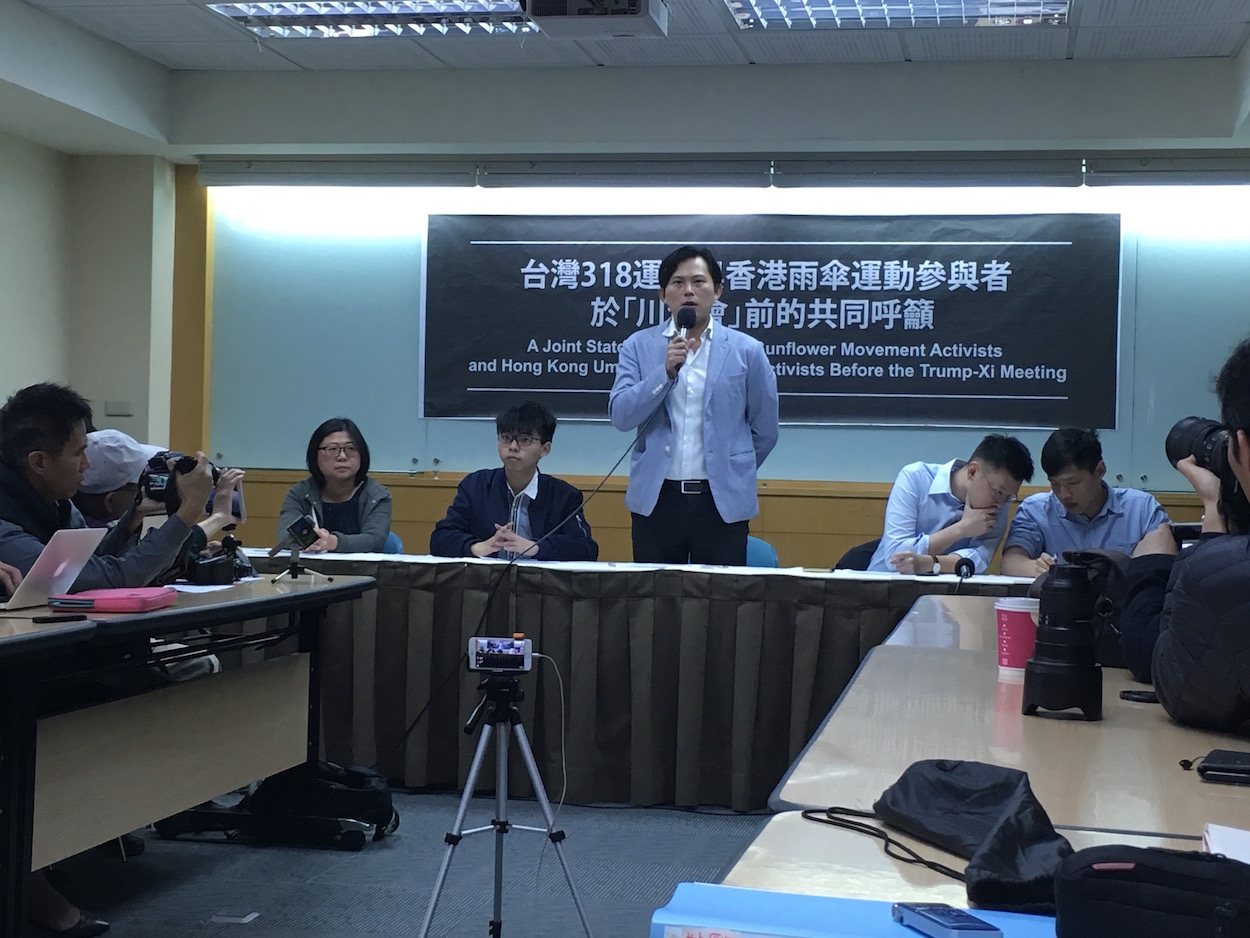 What is demanded of China in the statement is that it: “Immediately disclose the location of Lee Ming-Che’s detention, immediately release Lee Ming-Che, ensure that Lee will not be subjected to torture, and see to it that Lee will be allowed visits from family members, legal consultants, and receive adequate medical care.”

AS THE PRESS conference and joint statement was connected to the upcoming meeting between Donald Trump and Xi Jinping, part of the intent behind this press conference would likely be to use the Lee Ming-Che case to apply pressure to America. As was stated by Chen Wei-Ting, what is particularly worrisome is that during American secretary of state Rex Tillerson’s meeting with Xi Jinping in March, Rex Tillerson expressed American commitment to a “new model of great power relations” between America and China based on “non-conflict, non-confrontation, mutual respect, and win-win cooperation”. In the Chinese diplomatic parlance, this means America would respect China’s “core interests” regarding its policy on Tibet, Hong Kong, and Taiwan. But, as stated in the joint statement, Umbrella and Sunflower Movement activists see this as “pretext to prevent the international community from concerning itself with human rights violations in Taiwan and Hong Kong.” 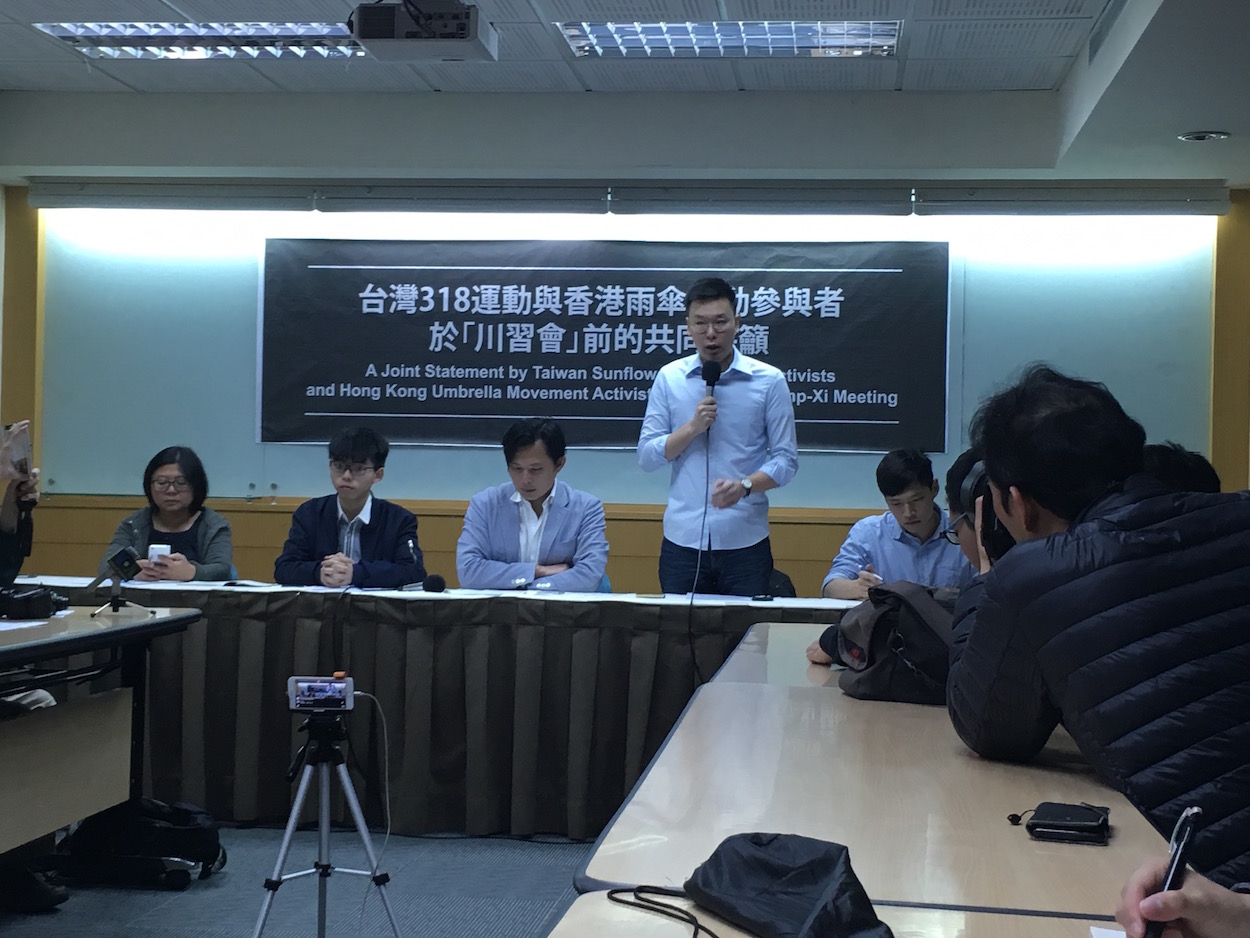 As raised by Huang during the press conference, America takes the position that it acts as a defender of human rights in the world, but Sunflower and Umbrella Movement activists are calling on America to live up to its claimed promises. Likewise, Huang stated that Sunflower and Umbrella Movement activists are hoping for not only America to concern itself with human rights abuses caused by China in Hong Kong and Taiwan, but the international writ large, as human rights is not the sole domain of America. Lin Fei-Fan reiterated similarly in his comments, stating that human rights are universal and international in nature and cannot be used as a bargaining chip for the sake of securing more favorable economic or trade conditions for America. This includes how China treats both what it considers “domestic” affairs as well as what it considers “international” affairs. Namely, China cannot be left to act as it will either domestically in the belief that what goes on within China’s borders is China’s business alone if that means violating universal human rights.

Unsurprisingly, after comments by Trump suggesting that the American “One China Policy” was up for renegotiation unless China might allow America more favorable conditions on a trade bill, Sunflower Movement activists have been in recent times been concerned about the possibility of Donald Trump using Taiwan as a bargaining chip for American interests. Obviously, Taiwan relies on America as guarantor of its de facto independence from China in the present. Indeed, one of the slogans of the Sunflower Movement was “Taiwan is not for sale” in regards to the KMT being willing to sell away Taiwan’s sovereignty to China for economic incentives. One can draw certain parallels with Trump and also suggest that for Trump, the human rights of Taiwanese citizens would be up for sale in his willingness to sell out Taiwanese sovereignty to China. As such, during the press conference, Sunflower Movement activists called on the American government under Trump as elected by the American people, and American civil society groups representative of the American people to take a stand for universal human rights and stand up for what America so often claims to be defending. Even if appeals during the press conference were primarily directed towards America, out of the international community as a whole, one wonders if we can observe more wariness of America and less reflexively uncritical pro-Americanism among the current generation of Taiwanese activists than, say, past generations of pro-Taiwan activists, particularly after the Trump administration took office.

With regard to the rare nature of the press conference as a joint effort between Joshua Wong and Sunflower Movement leaders, Wong stated that he hoped to bring more attention to Lee Ming-Che’s case through his presence and that, as a result of similar situations in which he has been detained after visiting another country because of diplomatic pressure applied by the Chinese government, he can sympathize with Lee. Wong also emphasized that human rights were universal in regards to hoping to stand for Chinese supporters of the Umbrella Movement who had been detained by the CCP, but stated that one can very much see the differences between Taiwan, a democratic country, and China, a non-democratic country, through Sunflower Movement leaders being acquitted of all charges from the Legislative Yuan occupation and China’s treatment of Umbrella Movement supporters. Huang agreed with Wong’s comments, stating that another part of the difference may have to do with rule of law, seeing as that while Hong Kong also was not democratic under British colonial rule, rule of law was practiced according to higher standards than now, in which rule of law bends under the will of the CCP.

Indeed, we may note that with the inclusion of support for detained Chinese activists supportive of the Umbrella Movement, and the contextualization of Lee Ming-Che’s detention in light of China’s overall crackdown on human rights advocates under Xi Jinping, the calls of Sunflower Movement and Umbrella Movement activists for human rights to be defended is broadly universalist in nature. Calling for universal human rights is therefore not exclusionary of China, even if Joshua Wong may call for greater autonomy for Hong Kong from China, and Sunflower Movement activists lean towards Taiwanese independence.

Lin, Chen, Huang, and Wong all stated that with China’s 19th Congress of the Communist Party of China slated to take place later this year, pressure on Taiwan and Hong Kong from China is expected to increase. Lee Ming-Che’s arrest may be an early sign of this. Nevertheless, it remains to be seen what will attract greater international attention towards the plight shared by Taiwan and Hong Kong, and what effects international pressure would be able to bring to bear upon China’s encroaching on the sovereignty of Taiwan and Hong Kong and its negative impact on the human rights situations of both. While today’s joint statement and press conference may point to the broader possibilities of future cooperation between both, the lacking presence of international media today suggests that outreach towards the international community on the part of both Hong Kong and Taiwan may need some work.