Conference Held Between Post-Umbrella And Sunflower Movement Legislators In Taiwan

A VISIT BY Hong Kong legislators to Taiwan over the past weekend for a conference organized by the New Power Party (NPP) has seen protests from pro-China groups in Taiwan, as well as warnings from China against Taiwanese independence activists and Hong Kong independence activists seeking to ally with each other. Visiting Hong Kong legislators include Nathan Law of Demosistō, Eddie Chu, and Edward Yiu, as well as Joshua Wong, also of Demosistō, one of the leading activists of the Umbrella Movement. On the Taiwan side, participants included Sunflower Movement leader Lin Fei-Fan and Wu Cheng of Democracy Tautin, all five of the NPP’s current legislators, and various staff members of both Hong Kong and Taiwanese legislators. 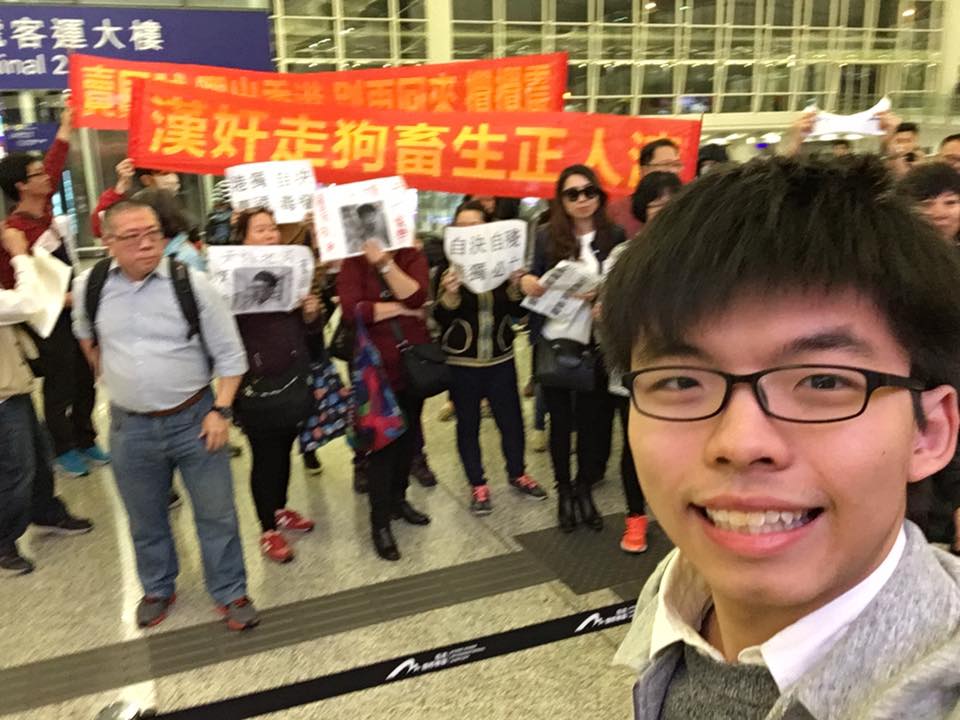 Selfie taken by Joshua Wong at Hong Kong International Airport with pro-China demonstrators who arrived to protest against him. Photo credit: Joshua Wong

Notably, none of the invited legislators from Hong Kong actually explicitly advocate Hong Kong independence. To begin with, if they did, that would have likely prevented them from running in legislative elections, given the refusal of the Hong Kong government to allow pro-independence political candidates to run, an action no doubt undertaken at Beijing’s behest. Rather, these are politicians which call for greater political autonomy for Hong Kong, but without a necessarily pro-independence stance. Despite misleading reports which claim otherwise, none of the invited legislators are actually “localists” along the lines of Youngspiration’s Baggio Leung and Yau Wai Ching. Although Eddie Chu is sometimes seen as a predecessor of contemporary Hong Kong localism, his more civic-oriented political platform distinguishes him from localists who have risen to recent public attention as Baggio Leung, Yau Wai Ching, and Edward Leung.

Neither does the NPP actually explicitly advocate Taiwanese independence as a party platform, although legislators from the NPP such as Freddy Lim have been open with this stance in the past and the party emerged from the mostly pro-independence Sunflower Movement. In general, the party seems to have become increasingly open about a possible pro-independence stance in recent times, perhaps seeing political opportunity to win over members of the pan-Green camp. Increasing views are that the DPP is too conservative even about preserving Taiwan’s de facto independence, much less with regard to taking action to realize de jure independence for Taiwan. 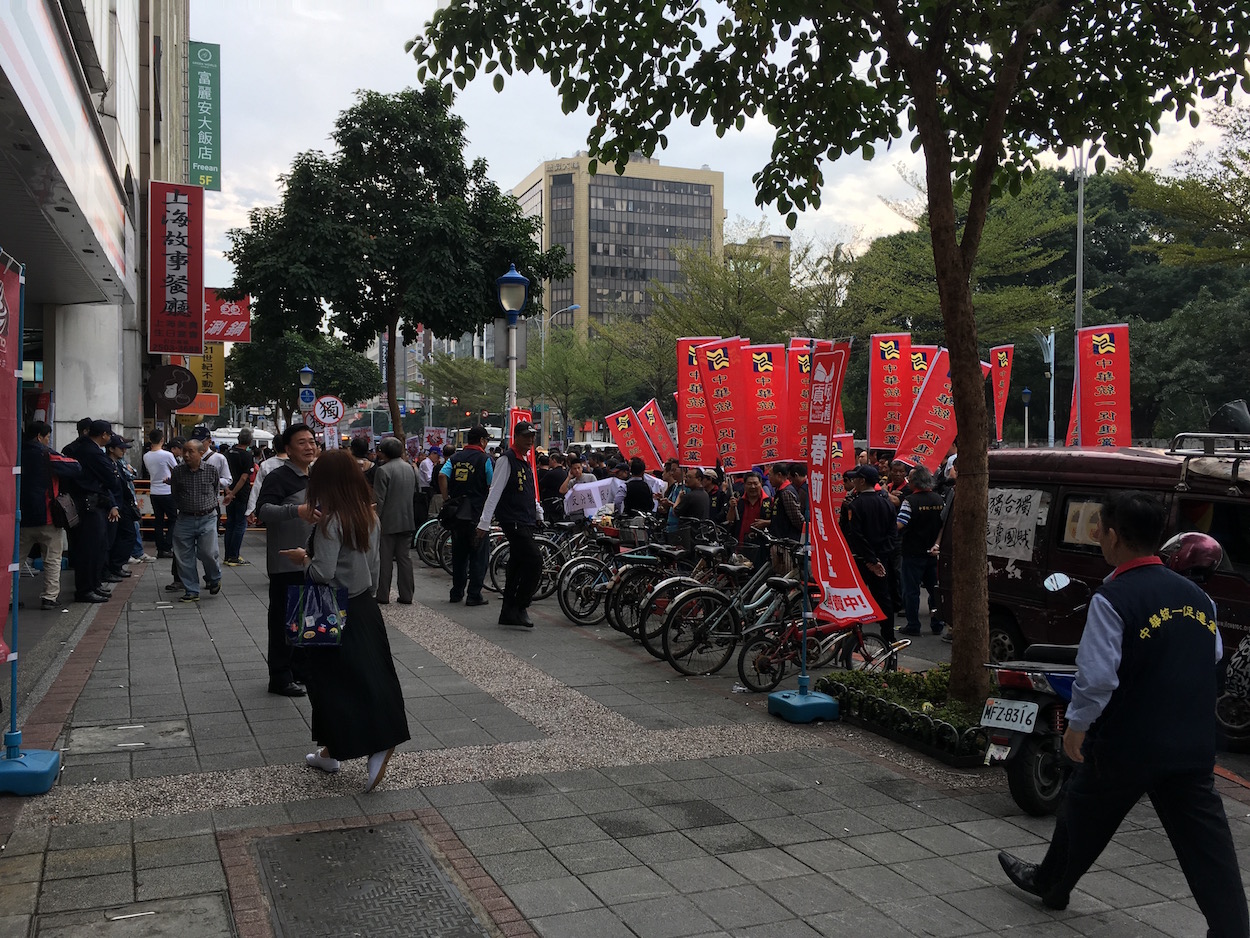 Nevertheless, much like Beijing, the conference between the NPP and Hong Kong legislators was understood as pro-independence by protestors from pro-China organizations in Taiwan such as the Chinese Concentric Patriotism Alliance and the China Unification Promotion Party. Several hundred protestors from these groups turned up at Taoyuan International Airport to demonstrate Joshua Wong arriving at Taiwan as well as outside of the conference itself, which was guarded by riot police. Law was later attacked at Hong Kong International Airport by pro-Beijing demonstrators as he returned from Taiwan. Wong later alleged that his and Law’s itineraries might have been leaked beforehand. During the proceeding of the conference itself, NPP chair Huang Kuo-Chang stated that the event was held in Taiwan and not Hong Kong because it is becoming increasingly difficult for members of the NPP to enter Hong Kong without being denied entrance, as occurred to Huang in the past.

Attempts to Build Ties Between Taiwan and Hong Kong?

AGAIN, NO DOUBT, China perceives the conference as an attempt by Taiwanese independence and Hong Kong independence activists to link up. Indeed, it should be apparent to all that the conference was aimed at building stronger ties between Taiwanese and Hong Kong activists to resist China. But, importantly, we may note that with the Hong Kong government seeking to expand the criteria upon which newly elected legislators may be disqualified from the Legislative Council despite having been allowed to participate in elections and having won elections, this conference may very well be seized upon as evidence of “pro-independence” views by Hong Kong legislators who have otherwise not publicly voiced such views. In this sense, it is somewhat surprising that some of the participants in the conference were willing to take such a risk. Two of the conference participants, Nathan Law and Edward Yiu, currently face legal challenges to their status as legislators. 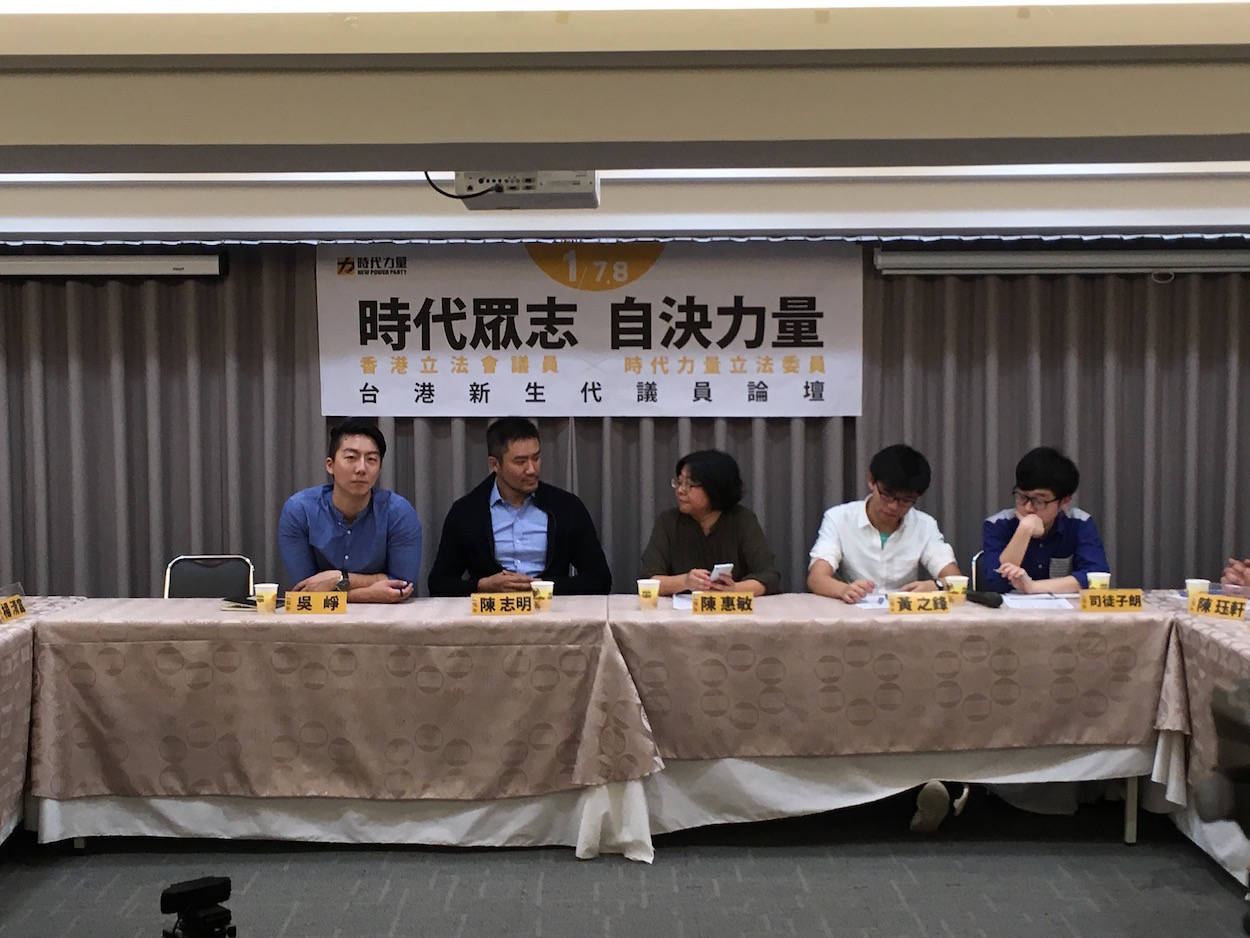 The NPP had organized public events with Joshua Wong in the past, which is not surprising given that Wong was one of the leaders of the Umbrella Movement and the New Power Party was formed by key Sunflower Movement leaders after the movement ended. This took place shortly after 2016 presidential and legislative elections in Taiwan, during which Wong visited Taiwan as an observer. Some have drawn analogy between Wong’s Demosistō Party and the New Power Party, and Wong has claimed that Demosistō was in some ways inspired by the NPP. The NPP was formed earlier, before the entrance of Umbrella Movement activists into electoral politics during 2016 LegCo elections, and its victory in 2016 Taiwanese legislative elections was seen as inspiring to post-Umbrella Movement activists in Hong Kong, prompting the entrance of post-Umbrella movement activists into electoral politics and the victory of some “Umbrella Soldier” candidates.

But the visit of Wong and Hong Kong legislators to Taiwan follows on the heels of a similar visit to Taiwan in October by localists Yau Wai Ching and Baggio Leung of Youngspiration and Hong Kong Indigenous members Ray Wong and Edward Leung. This occurred after Yau and Leung’s victory in 2016 Hong Kong LegCo elections, but before the oath-taking row that led to their eventual barring from taking office. This was an event organized with Le Flanc Radical, a Taiwanese “left independence” group that participated in 2016 Taiwanese legislative elections as part of the Taiwan Solidarity Union. 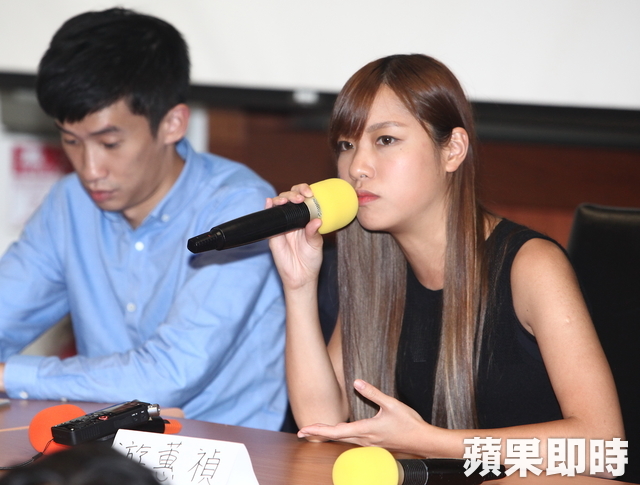 While Le Flanc Radical did not win any seats, it may not be surprising that the more openly pro-Taiwan independence Le Flanc Radical would hold an event with Hong Kong localists advocating Hong Kong independence rather than legislators only calling for greater autonomy for Hong Kong. However, while it is true that both the New Power Party and Demosistō may be more politically moderate, localists groups and Le Flanc Radical also share the fact that they are are controversial. Localists groups have been criticized for anti-Chinese sentiment with possibly racist undertones, as came up during the oath taking controversy that eventually led to Yau and Leung being prevented from taking office. Similarly, Le Flanc Radical has been criticized for views verging on right-wing ethno-nationalism, despite its own claimed “left independence” stance, as well as its attempts at character assassinating other “left independence” third parties.

REGARDLESS, it does seem as though activists in Hong Kong and Taiwan are aiming for closer cooperation. What that would entail, apart from occasional public events held together, or skill-sharing sessions, is unknown. Namely, much of the conference was aimed at skill-sharing, with legislators and their staff sharing their experiences in running in elections as political amateurs.

During the proceedings of the conference, similarities were quite evident between the means by which Taiwanese and Hong Kong activists both entered electoral politics as political amateurs and faced challenges entering into the political system after previously focusing on street protests and the like. Both Taiwanese and Hong Kong activists emphasized that their motivations for entering the political system was in order to keep up momentum for change after the Sunflower and Umbrella Movements. Namely, the strength of street protests weakened after the upsurge of both movements, and so it was necessary to enter into the political system to try and accomplish lasting change.

However, this comes with challenges, such as the perception from social movement participants than activists entering into the political system means increasing conservatism on their part and that established political parties may not take so kindly to newcomers to politics. For example, new legislators in Hong Kong faced possible opposition from established members of the pan-Democratic camp while members of the NPP continue to have an uncertain “frenemy” relationship with the Democratic Progressive Party. Moreover, attempting to win over voters does sometimes mean that one is perceived as “centrist” and so one comes under attack for both being too conservative from social movement participants, while regular members of society may still perceive activists seeking to enter electoral politics as too extreme. 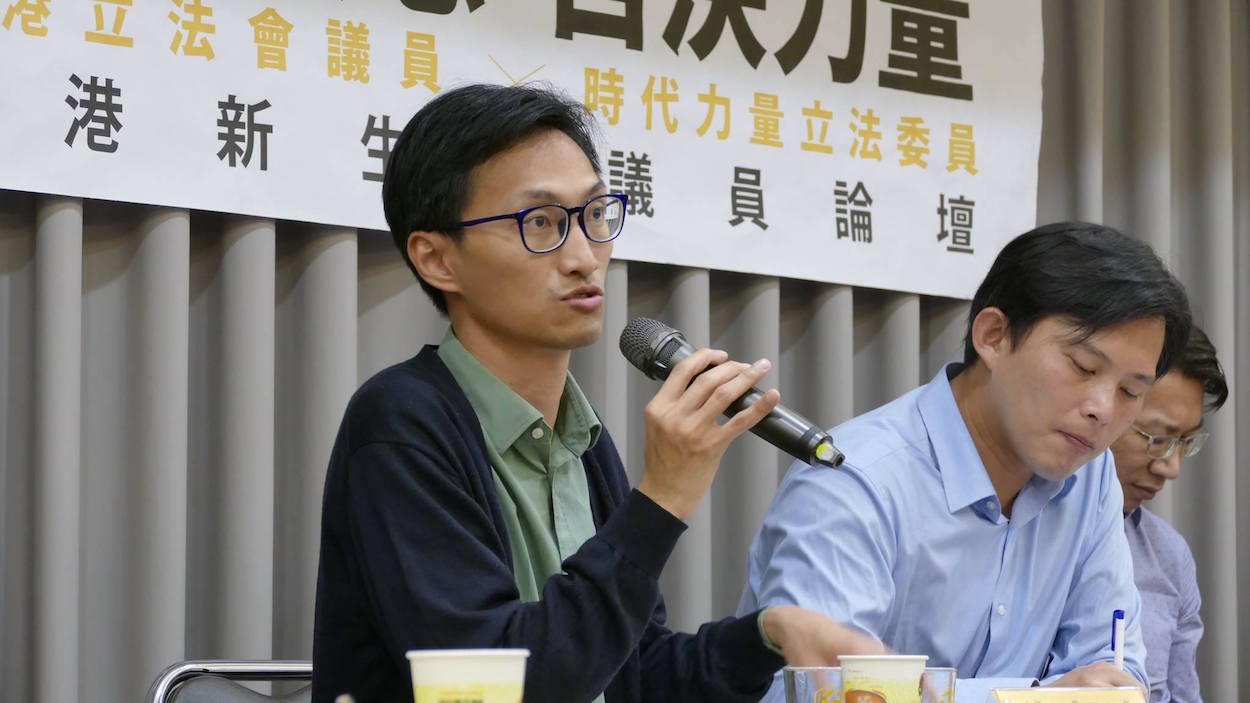 As Joshua Wong pointed out during the event, entering into the political system also means greater division of labor between handling media, organizing events, and coordinating different working groups, rather than just thinking in terms of street actions. Challenges of participating in politics also include having to take into account polling differences between different demographic groups in various local constituencies. Certainly, in that sense, the challenges of entering electoral politics after social activism seem similar, regardless of context. 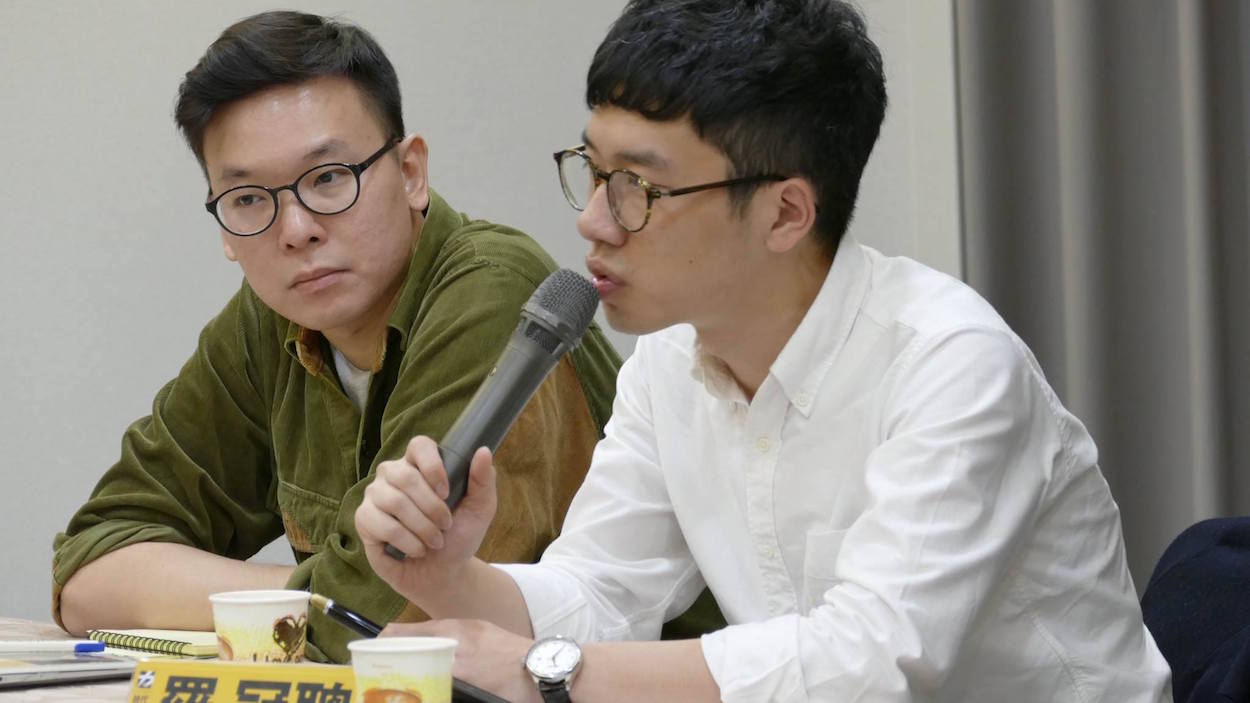 But it remains that Hong Kong is the more politically dangerous environment, by far, given that Hong Kong authorities act at Beijing’s behest and residents of Hong Kong can be directly targeted by Beijing. While Taiwan also has enemies from within, such as the KMT and other pro-China groups, Taiwan’s de facto independence protects it. There is no risk of being kidnapped by the Chinese government for expressing views critical of China, for example, as occurred with Hong Kong booksellers who published books critical of Chinese leaders. We will see, then, as to how Taiwanese and Hong Kong activists can work together at a more intimate level beyond simply mutual expressions of solidarity. Going forward from the conference, these are the deeper questions which must be addressed.