Four Domestic Cases Announced, CECC States That Novotel Cluster Not Believed to Be Origin of Outbreak

FOUR DOMESTIC CASES and fourteen imported cases were announced at the Central Epidemic Command Center’s daily press conference today. Three of the domestic cases were already in quarantine, as a result of which only one case has an unclear source of origin and is under investigation. Two deaths were announced.

Two cases were in Taipei and two cases were in Kaohsiung. 89.9% of cases to date have been released from quarantine. Of the imported cases from today, five had two doses of vaccination, but only two had reached fourteen days after their second dose. According to Minister of Health and Welfare Chen Shih-chung, going off of memory, this seems to be the highest number of daily imported cases.

158,706 vaccinations took place yesterday, bringing vaccination coverage to 38.37%. 40.91 per 100 people have been vaccinated. More than nine million have now received at least one dose of COVID-19 vaccine. 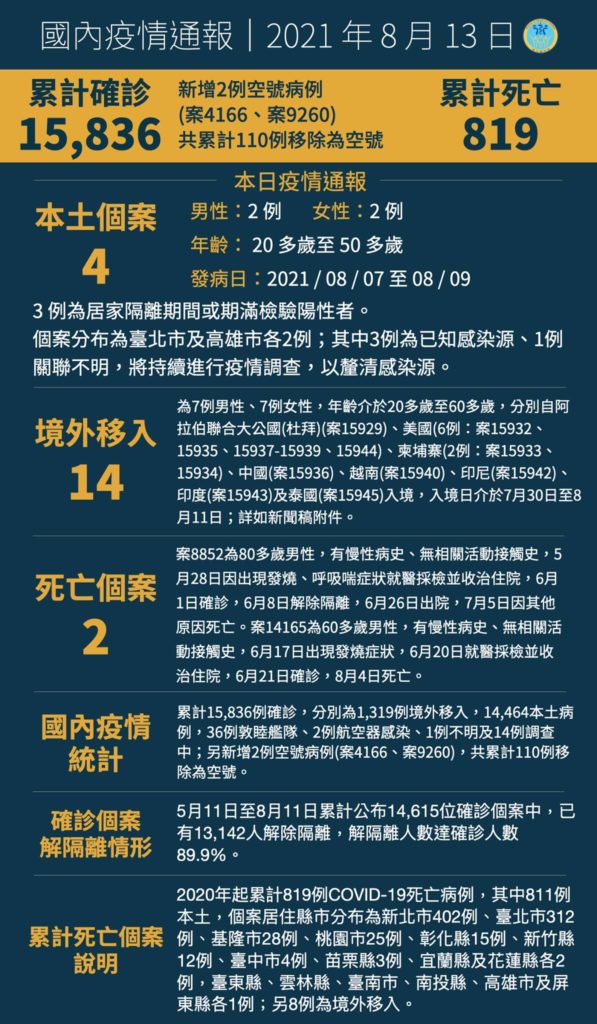 The upcoming sixth round of vaccinations will be mostly Medigen vaccines. 1,130,000 are willing to be vaccinated with Medigen, but the exact number that will be vaccinated is still unclear. A more exact number will emerge once those who are vaccinated with Moderna are deducted from this. Registration for the sixth round of vaccination ended at noon today and registration will go from August 16th at 10 AM to August 18th at 12 PM. Vaccination will go from August 23rd to August 29th.

Chen stated that the 3+11 quarantine schedule had been used last year until December 30th. Subsequently, this was changed to a schedule of seven days of quarantine followed by seven days of self-health management, which was maintained until March 11th. On March 11th, this was changed to a schedule of five days of quarantine followed by nine days of self-health management. On April 14th, this was again changed back to the 3+11 schedule, though new measures such as requiring PCR testing at the end of quarantine, and new measures for quarantine hotels were also rolled out.

The CECC may be understood as defending its decision to lower the quarantine period for pilots and other airline workers, something criticized as leading to the present outbreak. The CECC believes that the cluster which subsequently emerged at the Novotel cluster was primarily isolated and did not affect the community. It is hard to clarify some cases of spread and the CECC cannot rule out the possibility of links, but this is the CECC’s conclusion.

Of the six cases whose variants could be confirmed this week, four Delta variant cases from the US, UK, Malaysia, and Israel were found this week. One case of the B.1.621 variant was found and one case of the Alpha variant was found. 35 Delta variant cases have been found to date, of which 13 were cases of domestic transmission in Pingtung, constituting 28% of 127 cases in which variants could be detected. Seven variants have been detected in Taiwan as of today.

The B.1.621 variant case appears to have been infected in the US, is asymptomatic, and is healthy but currently in a negative pressure isolation ward.

When asked about a Vietnamese airline worker that caught COVID-19, the CECC stated that their source of infection is known, and that their contacts in two workplaces have been isolated.

The CECC can discuss assisting individuals arrange vaccinations in Palau during trips there as part of the Palau travel bubble if needed. The CECC believes that Palau is safe, with 100% of the population vaccinated and zero domestic cases to date, and travel open to travel groups from Taiwan. Individuals that return from Palau require five days of strengthened self-health management and nine days of self-health management. 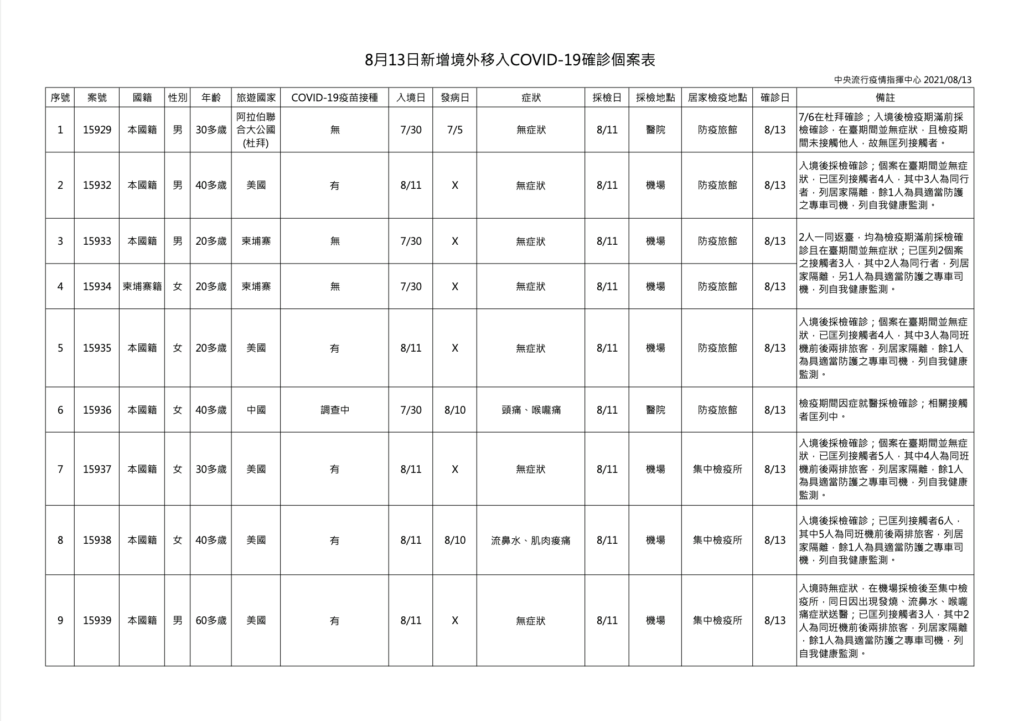 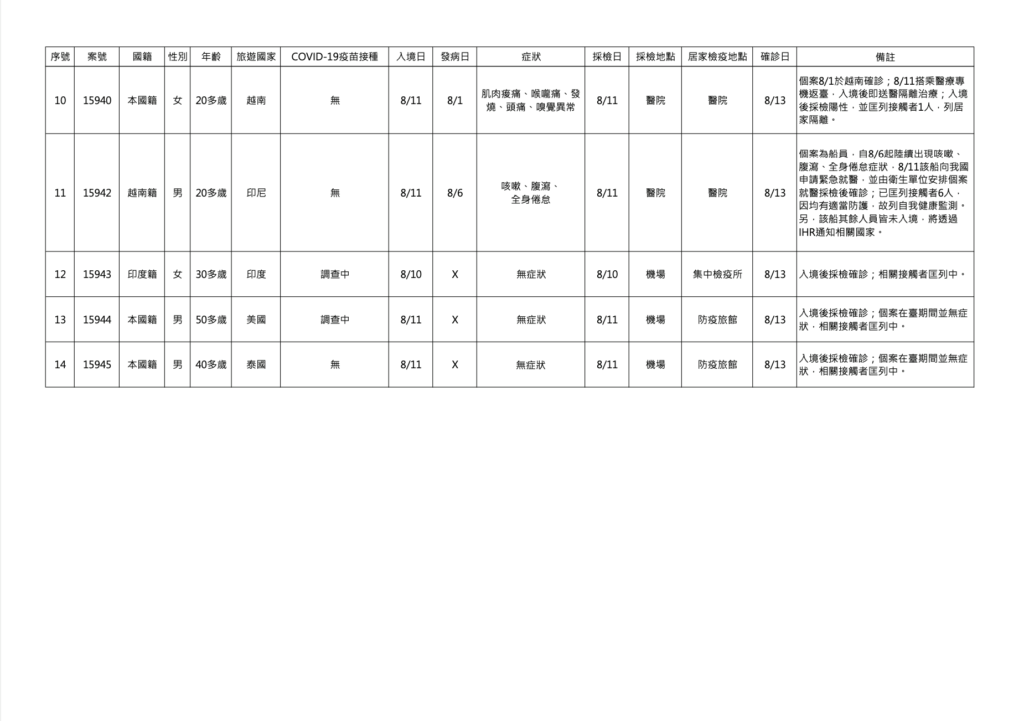 There are no plans to delay the reopening of schools, with some classes opened. Measures for school buses will be discussed with the Ministry of Education.

With reports that BioNtech has stated it will send out vaccines to Taiwan once procedures are complete and has agreed on a delivery date with Taiwan, Chen stated that this must be carried out step-by-step.

According to New Taipei mayor Hou You-yi, though there were no new cases in New Taipei, 1,391 tests at neighborhood testing sites in Yonghe found two cases between August 9th and 12 PM today. Testing will continue at the Renai Park in Yonghe today and tomorrow, with no plans to dismantle neighborhood testing sites. New Taipei will hold a conference with the 21 quarantine hotels to consider future measures against the COVID-19. With reports that Pingtung has received new regulations for crane claw machine stores, New Taipei states that it will consider the feasibility of new measures once it receives them.

New Taipei sought to attack the CECC regarding its claim today that the Novotel Hotel cluster was not the source of the outbreak, stating that there must have been a hole in prevention measures from imported cases.

According to Taipei mayor Ko Wen-je, of the two cases today, one was in home quarantine. The source of infection for the other case is unknown, but they are an airport worker. As a result, in Ko’s words, “they may have had contact with foreigners” and become infected that way. Ko stated that Wanhua is no longer a hotspot, though this is not the first time that Ko has stated this. Vaccination coverage in Taipei is at 50.1% now.

Ko stated that traffic on the MRT was down to 25% of its usual capacity in June and has returned to 50% of usual capacity by August, citing that MRT traffic was a good way to evaluate the economic effects of COVID-19. Consecutively, publicly-owned properties will have rent reduced 75% for three months and then 50% for three months. Ko called for landlords to consider similar measures. 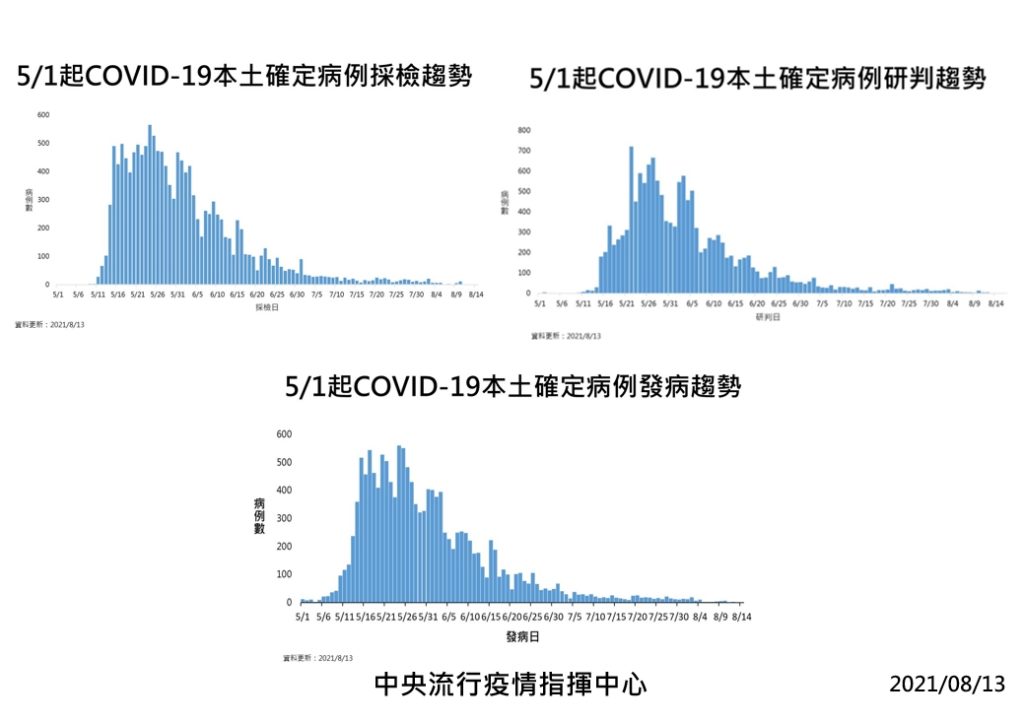 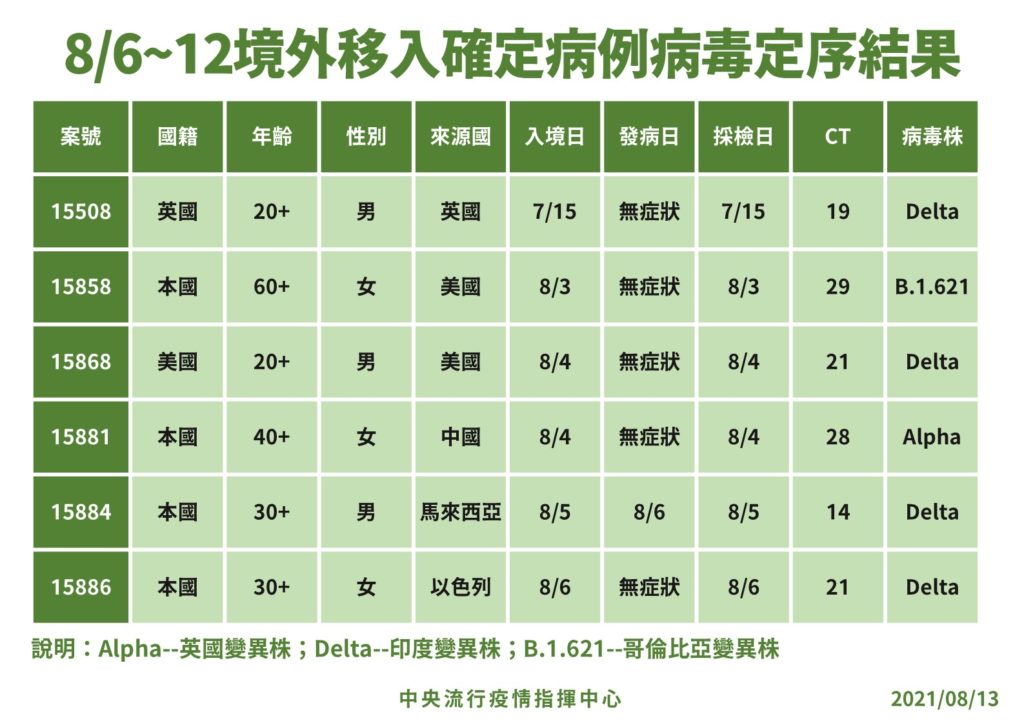 Further data from the CECC (left) and variant testing for imported cases from August 6th to August 12th (right). Photo credit: Ministry of Health and Welfare/Facebook

When asked, Ko stated that it could not ruled out that the outbreak may originate due to foreigners working in tea parlors in Wanhua, with many sex workers in Wanhua being migrant workers. Ko attacked the CECC over its assertion today about the Novotel cluster, claiming that the CECC was attempting to avoid responsibility.

Ko also sought to attack the CECC over the Palau travel bubble, seeming to allege that this was a hole in COVID-19 prevention measures despite Palau reporting no cases to date. Ko called on the CECC to publicize the results of the meeting that led to the Palau travel bubble and criticized the CECC for pushing responsibility onto Taipei for having to carry out PCR tests for individuals returning from Palau. Nevertheless, the number of individuals traveling to Palau is expected to be low.

Moreover, Ko attacked the central government over stimulus vouchers, claiming that he believed it was too early to consider economic relief measures when he still had concerns over public gatherings in places such as outdoor areas. Ko claimed that the central government is still unclear about what measures it intends to roll out and that Taipei will roll out funds electronically through TaipeiPASS, if it decides to distribute funds electronically. When asked about the approval rating of his Taiwan People’s Party increasing to 15% from 10%, Ko asserted that this was due to making the right decisions.