A VISIT BY Kaohsiung mayor Han Kuo-yu to Hong Kong has provoked outrage from both Taiwan and Hong Kong politicians. Han is accused of infringing upon both Hong Kong and Taiwan’s sovereignty in directly meeting with Wang Zhimin, the director of Hong Kong’s Beijing Liaison Office, which represents the Chinese government in Hong Kong. In this way, Han is criticized seeking to carry out a high-level exchange with the Chinese government in a manner circumventing normal diplomatic channels, something that would infringe on Taiwanese sovereignty but would be in line with the KMT’s general pro-China stance.

Criticism of Han’s visit from Joshua Wong of Demosisto

Condemnations came from Taiwan’s New Power Party (NPP) and Radical Party, which both emerged after the 2014 Sunflower Movement, and Hong Kong’s Demosisto, which emerged after the 2014 Umbrella Movement. The NPP criticized Han for crossing a red line in terms of his authority as a city mayor in unilaterally conducting such a meeting with a high-ranking Chinese diplomatic  official, as did the Radical Party, which criticized Han for visiting the Liaison Office without making any prior declaration of his intent to do so, in spite of that this touches on Taiwan’s national security.

The Han media juggernaut has led to speculation about whether Han intends to contend for the KMT’s 2020 presidential nomination going forward, as well as whether the party will attempt to “draft” Han, seeing him as their most likely route to the presidency. However, Han’s visit to Hong Kong takes place as part of a planned trip that will include stops in Macau, Shenzhen, and Xiamen. Visiting Hong Kong on March 22nd was the first stop in this tour.

It was previously feared that KMT city mayors such as Han Kuo-yu would attempt to use the model of city-based exchanges originally pushed for by Taipei mayor Ko Wen-je as a means of conducting diplomatic exchanges with the Chinese government, in order to get around the central government. Yet with Han’s superstardom having reached such levels that media speculation is feverish about whether he could be Taiwan’s next president, China’s reception of Han in the next week will be an important indicator as to whether the Chinese government would like to see Han as president of Taiwan, rather than another candidate. 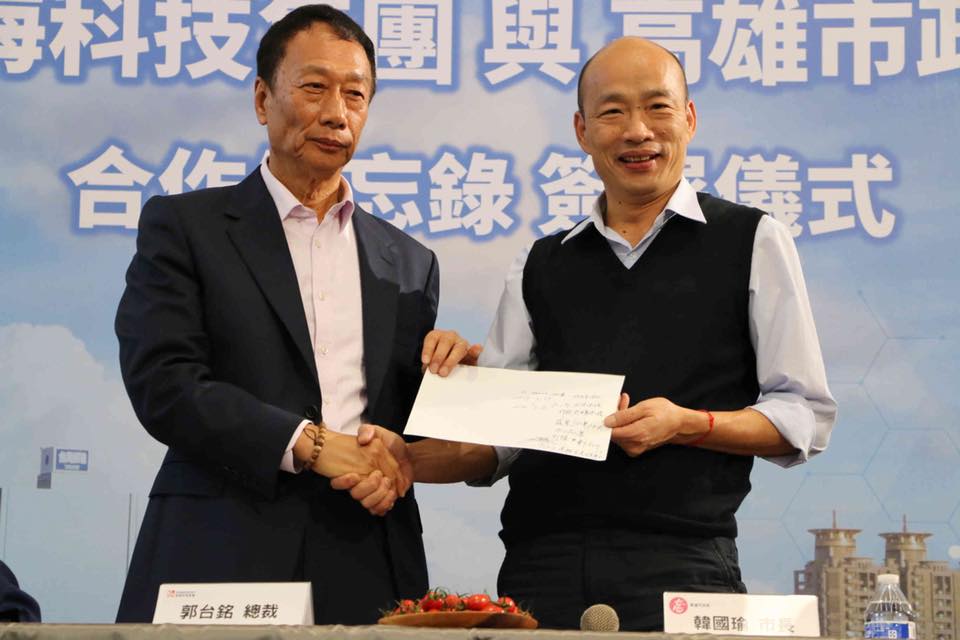 To this extent, Han’s visit to Hong Kong included a meeting with Hong Kong Chief Executive Carrie Lam, following which the two signed trade deals worth 2.47 billion NT for Hong Kong to buy Kaohsiung products. These products were primarily agricultural, in line with Han’s public image as a businessman and agricultural expert from his past chairmanship of the Taipei Agricultural Products Marketing Corporation. After the meeting, Han also touted the possibility of raising Hong Kong’s total import of Taiwanese produce from 3.6% to 10% or 12%.

It is possible that the meeting and trade deal between Han and Lam will be the first of a series of trade deals that Han signs with Chinese cities in his subsequent travels through China. Through signing trade deals with Chinese cities and making it appear as though Han is taking a great deal of business back to Taiwan, China would be attempting to increase Han’s popularity through drawing on his public image as a businessman and dealmaker, to bolster his image as a politician able to turn around Taiwan’s economy. This would be with the aim of propping up Han’s popularity so that he could secure the KMT’s presidential nomination at a time in which economic issues are a key determinant of Taiwanese voting behavior.

Indeed, some have accused Chinese “fake news” disinformation efforts as behind the meteoric rise of Han Kuo-yu from relative political obscurity to superstardom. Regardless of if this is true or not, if Han subsequently signs a series of trade deals in China in the course of his travels in the next week, this would be a much more direct sign of Chinese support for Han. Yet it remains to be seen whether this takes place.