18 DOMESTIC CASES and six imported cases were announced at the CECC daily press conference today. Nine of these cases were already in quarantine. Four deaths were also announced. 13 cases have known cases of infection, while five cases were of unknown source. There were seven cases in Taipei, six cases in New Taipei, three cases in Keelung, and two cases in Taoyuan. 86.9% of cases to date have been released from quarantine.

According to Minister of Health and Welfare Chen Shih-chung, the average age of cases has declined, meaning that the risk for young people spreading COVID-19 is higher now. Most cases remain in greater Taipei and cases spread primarily from family gatherings.

According to Premier Su Tseng-chang, in light of the current COVID-19 situation, the Executive Yuan is considering freezing electricity pieces for July and not increasing them. Su has also commanded Executive Yuan agencies to draw up regulations for businesses under their jurisdiction in preparation for lowering the alert level to level two. 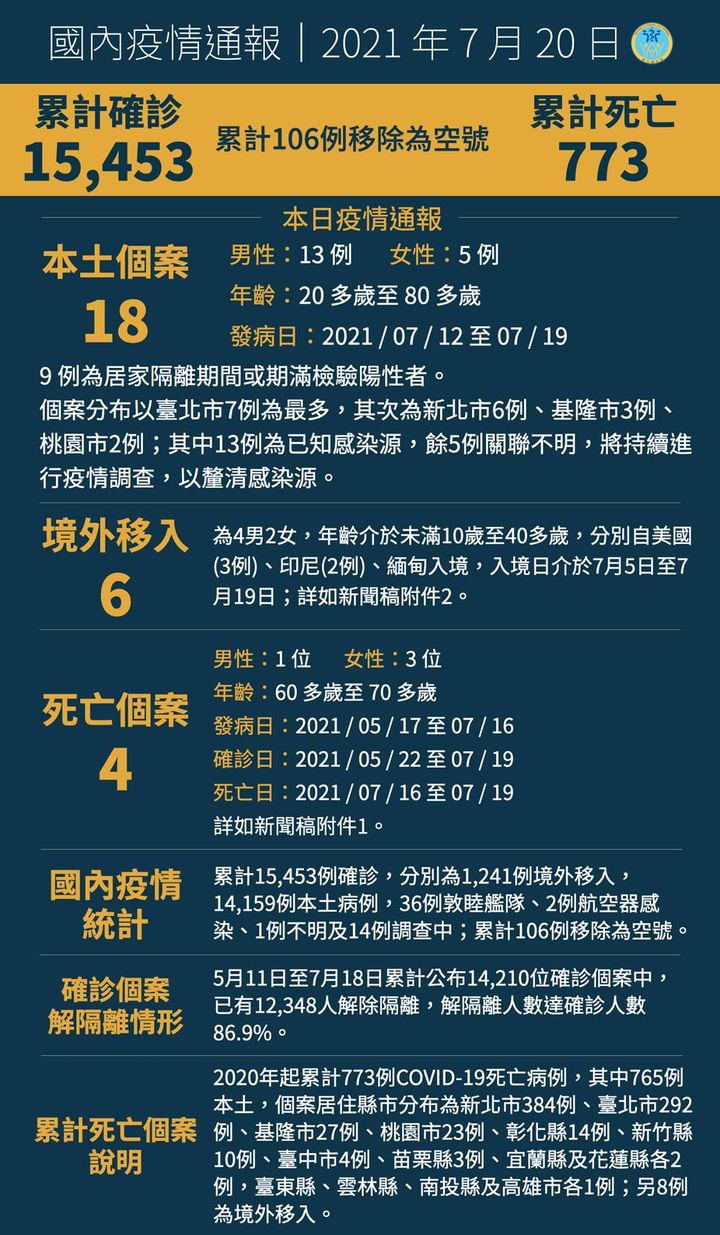 The CECC will also hold meetings this week with local governments regarding lowering the COVID-19 alert status. The CECC, too, is making preparations for next week if the situation remains stable. That being said, measures such as mask-wearing, QR code registration, and use of hand sanitizer will remain, and the alert system being lowered to level two does not mean that all measures will end.

In particular, the tourism industry is heavily affected, with 60% of hotels having ceased operations or shifted to become quarantine hotels. Although a one-time subsidy of 40,000 NT was provided by the government per employee, relief measures may have limited effect. While the Executive Yuan plans to again issue stimulus vouchers, to boost the economy, the KMT has called for direct cash payments of 10,000 NT instead.

26 have been fined in Sanxia District in New Taipei for violating restrictions on outdoor public gatherings after getting into a fight. The 26 individuals were fined a total of 2.52 million NT.

After an employee at the Viewshow in the QSquare shopping mall was confirmed to have COVID-19, QSquare has been shut down for disinfection.

Testing continues to be carried out in the Mitsui Outlet Park shopping mall in Linkou. Negative test results will be required for workers to enter the workplace.

Five-day, four-night travel packages to Guam, which will allow for vaccination there, continue to be sold by travel agencies. 70% of tickets for seven-day tour packages scheduled to depart on August 2nd and August 8th have been sold, with 439 buying packages to visit Guam for groups that left on July 6th and July 10th.

With a higher volume of passengers arriving on flights on Wednesday, Friday, and Sunday, the CECC will dispatch more personnel to the Taoyuan International Airport when needed.

Given the typhoon set to approach Taiwan later this week, the CECC stated that safety takes precedence and that people can take off their masks in the case of an emergency.

150,000 masks will be donated to the Brazilian state of Goiás to assist with efforts fighting COVID-19. 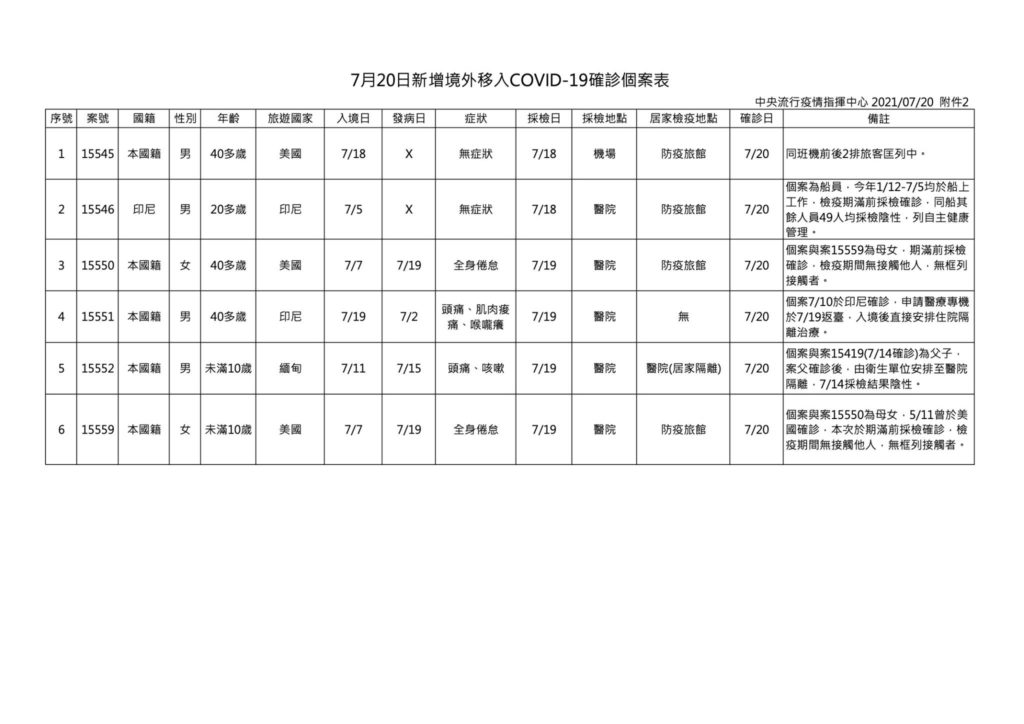 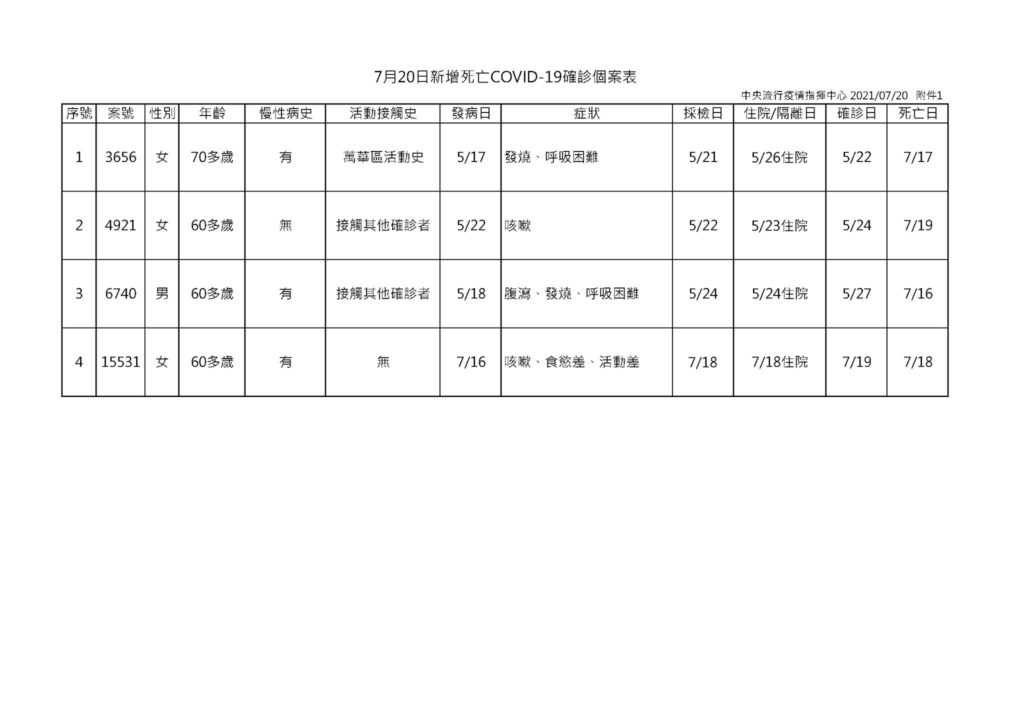 Information on the imported cases from today (left) and on the deaths announced today. Photo credit: Ministry of Health and Welfare/Facebook

The CECC will consider ways to assist foreigners who do not have National Health Insurance cards register for vaccination appointments.

The CECC stated that some young people, who were notified of being able to arrange vaccine appointments despite not being in eligible categories, may not be aware of being in category nine. The text message appointment system should avoid individuals not old enough to be vaccinated from making appointments to do so.

There were 88 adverse reactions to vaccines yesterday. Of these, there were 33 non-serious incidents, 9 deaths, one allergic reaction, and 45 other serious reactions. There were five deaths after AstraZeneca and four deaths after Moderna. 104 autopsies have been carried out, of which

Mixed vaccination is still reserved for individuals who had reactions to their first dose vaccination. Experts will discuss if pregnant women vaccinated with AstraZeneca that want to switch to Moderna after learning they are vaccinated can do so.

The CECC is optimistic about Tzu Chi being able to make vaccine purchases, because a model has been set up for this by TSMC and FoxConn.

Following the passage of Emergency Use Authorization (EUA) for domestically-manufactured vaccines, the KMT has lashed out at the process, claiming that the review committee was influenced by political considerations to simply act as a rubber stamp. KMT chair Johnny Chiang later filed a lawsuit against Chen Shih-chung on corruption charges, clearly intending to use the issue as a way to attack the DPP, and alleging that Chen and other DPP officials were paid off by Medigen or had investments in Medigen. When asked about this today, Chen Shih-chung chuckled and stated that he expected the legal system to be fair.

It is to be seen if resistance from the KMT affects views regarding the safety and effectiveness of domestically-manufactured vaccines. Otherwise, the data shows that domestic vaccines are as effective as AstraZeneca vaccines.

New Taipei mayor Hou You-yi attacked the CECC several times today at the New Taipei press conference, though some criticisms were voiced through his deputy mayor. New Taipei accused the central government of failing to take young people into account for vaccination, seeing as vaccination is based on risk and has prioritized older individuals at risk. Hou also urged the slow relaxation of level three measures rather than quickly lowering measures to level two, which may suggest that Hou is considering defying the CECC and maintaining level three measures after the shift to level two—something that the CECC has stated that local governments cannot do. To this extent, when asked about the corruption charges against Chen Shih-chung filed by the KMT, Hou did not comment, but New Taipei officials suggested that there was some validity to this, claiming that the central government was prioritizing developing untested domestic vaccines over efforts obtaining proven international vaccines.

Taipei mayor Ko Wen-je began his press conference today by stating that he expected cases to halve per week and that, as many cases were taking place through household infections, he hoped for individuals feeling sick to get checked out sooner, rather than later. Claiming that there were increased cases of individuals hiding their travel history and because Taipei needed to know travel history faster to prevent the spread of COVID-19, Ko stated that there would be fines of 60,000 NT to 300,000 NT imposed on individuals that hide their travel history.

Childcare facilities in Taipei will require 80% vaccination and to submit plans for re-opening to the city government if they hope to do. Stalls in night markets and traditional markets will be eligible for subsidies of 10,000 NT per month for up to six months and 5,000 NT per month for six months if they do not have tax qualifications for delivery services. There are no plans to conduct vaccinations in Taipei on Saturday and Sunday, given the typhoon, while further cancellations will be notified by text message. Ko stated that he found passing EUA for Medigen to be acceptable, but that there needed to be further clarity about what was defined as emergency use and how many vaccinations the central government intended to carry out. 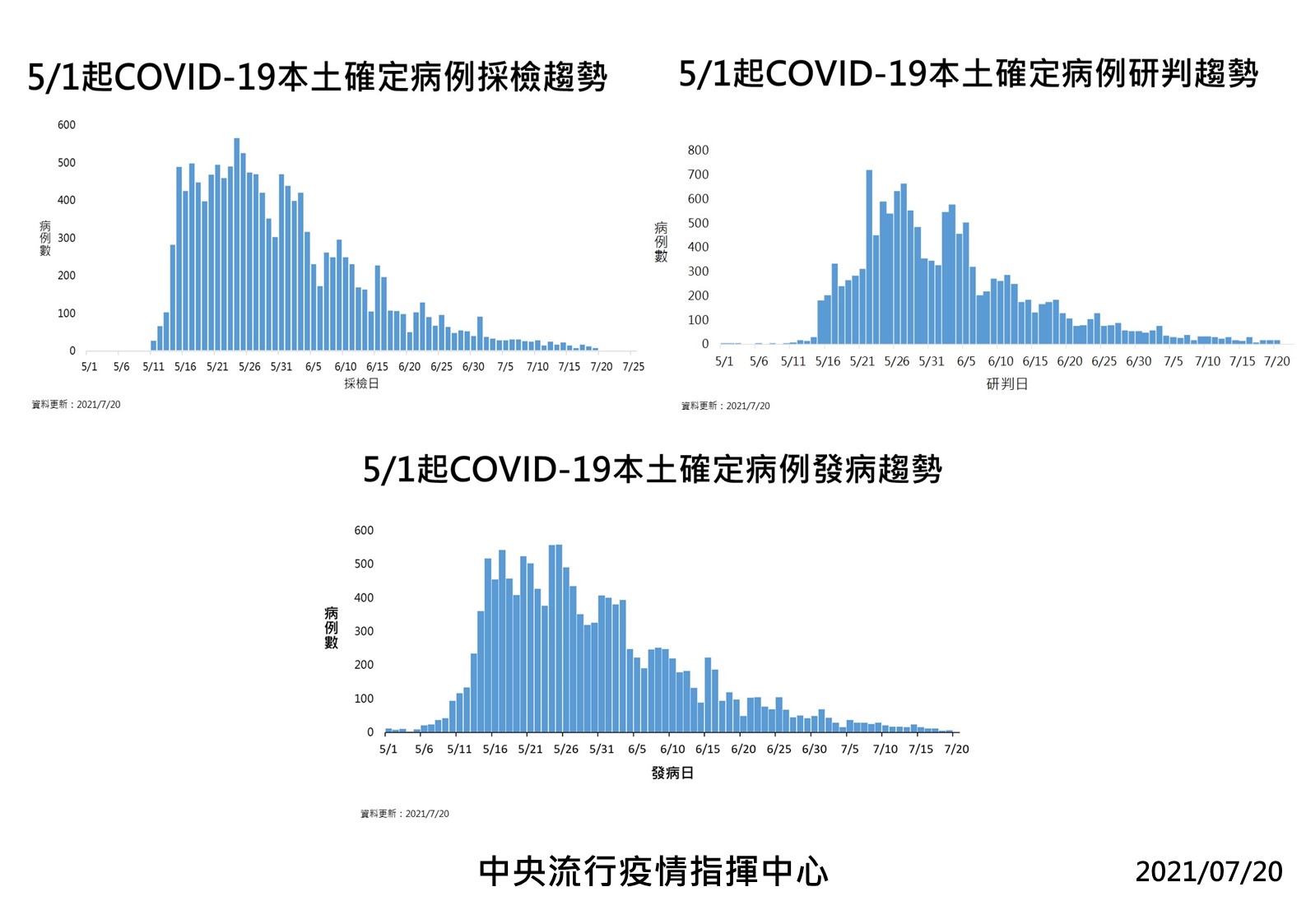 Minister of Health and Welfare Chen Shih-chung stated today that, of the twenty members of the panel of experts that voted on authorizing domestic vaccine manufacture, the chair of the panel did not vote since there was no need to break any tie, that three voted to allow for domestic manufacture, fifteen voted for conditional manufacture, three abstained, and one voted against.

In particular, scrutiny is likely to come on that the meeting was not recorded with. Chen stated that experts did not wish to be recorded so as to discuss freely, and that the CECC outlined this previously, asserting that there were advantages and disadvantages to publicly recording meetings. Nevertheless, with Taiwan hoping to secure international recognition of its vaccines, meeting records will be released. Further accusations against the CECC revolve around claims that the oversight committee was replaced partway through the process, which the CECC has stated is a routine part of the vaccine approval process.

If the Medigen vaccine has issues, its EUA may be canceled, as is normal with EUA. Chen Shih-chung stressed that, as far as he was aware, no country had waited until phase three testing of vaccines was complete before authorizing EUA.