AN ONLINE COMMEMORATION for the 32nd anniversary of the Tiananmen Square Massacre was held today by livestream. The event began at 7 PM and lasted until 9:15 PM, while livestreamed on Facebook and YouTube.

Tiananmen Square Massacre commemorations are held annually in Taiwan in Liberty Plaza. However, an outbreak of COVID-19 earlier this month currently makes it impossible to hold a physical gathering, with restrictions on outdoor gatherings of more than ten people. 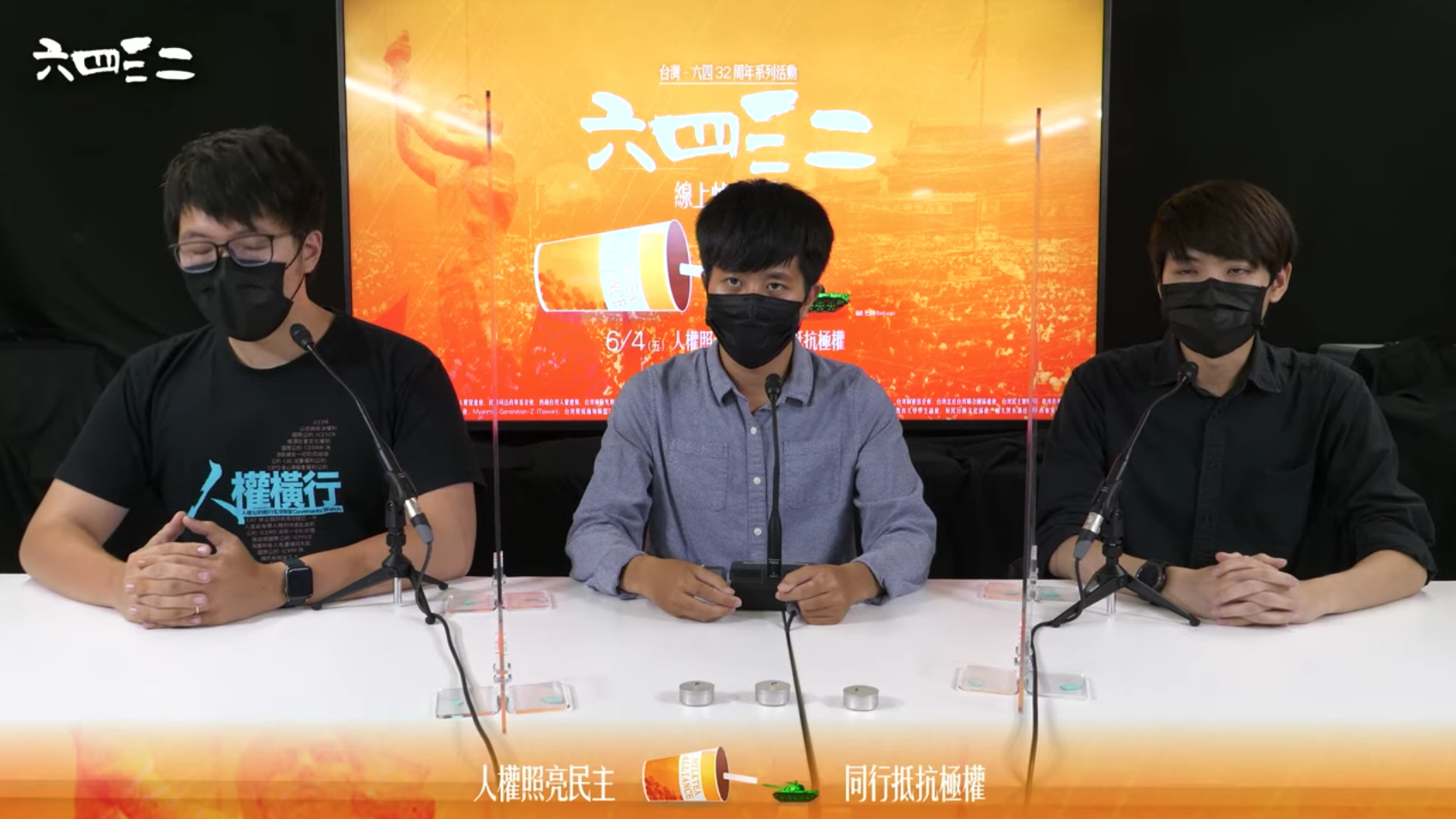 Nevertheless, as the event’s MCs opened the event by mentioning, despite the online format this year, it may be only Taiwan that is able to hold commemorations of the Tiananmen Square Massacre at present. Namely, the Hong Kong and Macau governments have banned the commemoration of the Tiananmen Square Massacre within their borders, with arrests of organizers this morning and ongoing police arrests of protesters in Hong Kong at time of writing.

The event was organized by the New School for Democracy, along with organizations including the Taiwan Association for Human Rights, Judicial Reform Foundation, Human Rights Network for Tibet and Taiwan, Taiwan Alliance to End the Death Penalty, Covenants Watch, the Taiwan Forever Society, Dr. Chen Wen-Chen Memorial Foundation, and other groups. 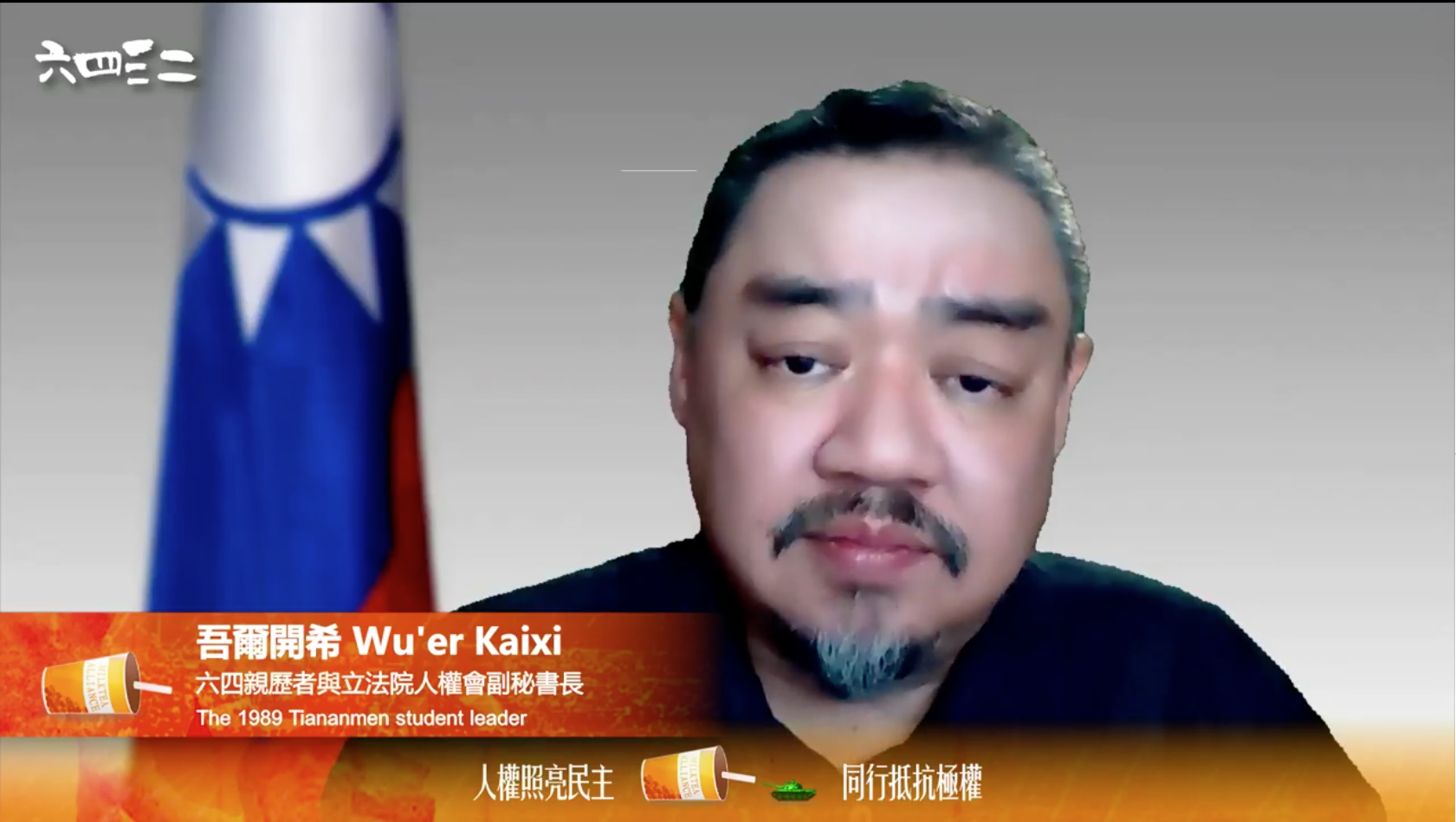 Among the first speakers at the event were Tiananmen Square participants, including scholar Wu Ren-hua, student leaders Wu’er Kaixi and Zhou Fengsuo. The former is based in Taiwan and is deputy secretary-general of the Taiwan Parliamentary Human Rights Commission and the latter of which currently heads US-based human rights NGOs. Chinese human rights lawyer Chen Jiangang and Chinese-Australian artist Badiucao, who designed the banner for the event, also spoke, with Badiucao discussing a watch issued by the CCP to members of the People’s Liberation Army that participated in the crackdown of student protesters.

Nathan Law, the former Hong Kong legislator currently living in exile in the UK, was another speaker. Law discussed the arrest of pro-democracy activists in Hong Kong such as Joshua Wong, Apple Daily owner Jimmy Lai, “Grandma Wong,” and others for participating in commemorations of the Tiananmen Square Massacre. 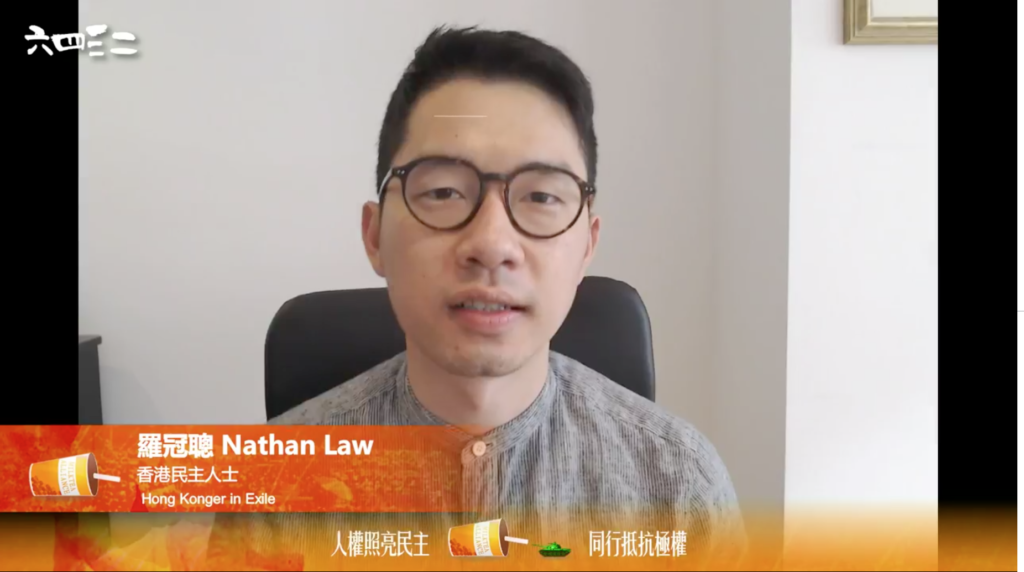 Likewise, Law touched on how commemorations of the Tiananmen Square Massacre in Hong Kong originally began from a point of identification with China, but gradually shifted toward support for democratic values, not necessarily identification. Another speaker was Sunny Cheung, a former Legislative Council candidate living in exile.

One of the three MCs for the event, referred to as Sky, was also from Hong Kong, with last year’s Tiananmen Square commemoration having been led by Hongkongers. A Taiwanese speaker representing youth activists who was another one of the MCs, Chang Yu-meng of the Taiwan Youth Association for Democracy, echoed Law’s comments, stating how Tiananmen Square Massacre commemorations in Taiwan took place but could show the differences between Taiwan and China. Chang stated that he believed that Taiwan could serve to provide aid to other individuals struggling for democracy in China, Hong Kong, Xinjiang, Tibet, and elsewhere, particularly as somewhere that had transitioned to democracy from authoritarianism. The third MC was Yang Kang of Covenants Watch. 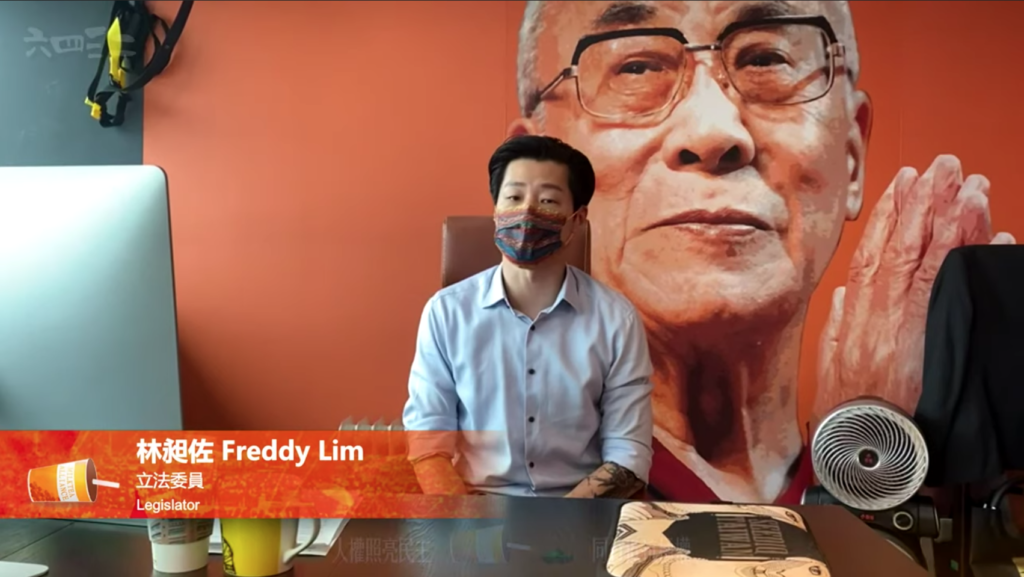 Other speakers were Taiwanese politicians. This included Legislative Yuan President Yu Shyi-kun of the DPP, independent legislator Freddy Lim, Hung Sun-han of the DPP, Chiu Hsien-chih of the NPP. A series of Taipei city councillors with backgrounds in activism including Miao Poya of the Social Democratic Party, and independent city councilors Huang Yu-fen and Lin Ying-meng. As part of the event framing was regarding the “Milk Tea Alliance,” one speaker represented Myanmar’s Generation Z, while another represented Thai activists in Hong Kong. Tashi Tsering, a well-known Tibetan activist living in Taiwan spoke lastly, representing Tibetans.

A video featuring a poem commemorating the Tiananmen Square Massacre and Taiwan’s 228 Massacre by Meng Nan was played along with a video of a small gathering of activists at Liberty Plaza yesterday. Activists gathered at Liberty Plaza to set up LED lights reading “8964 32” yesterday, while maintaining social distancing measures. At 8:09, a 64-second moment of silence was held. 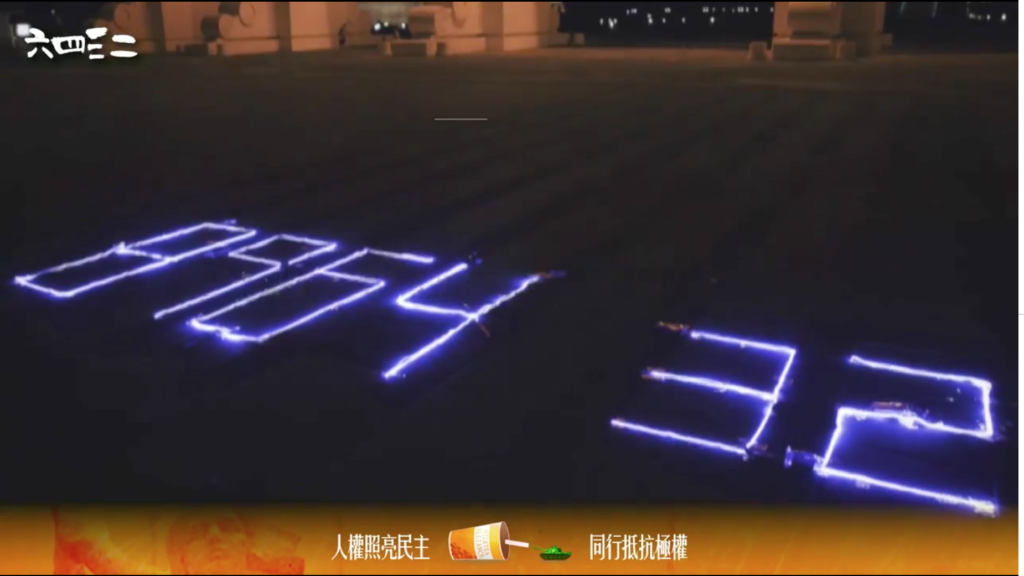 A memorial for victims of the Tiananmen Square Massacre we set up in Liberty Plaza and open to visitors from 4 PM to 8 PM today, though only one individual was allowed into the memorial at a time and no more than nine people were allowed to gather at a time, to avoid violating restrictions on public gatherings due to COVID-19. Earlier this afternoon, three violent individuals pushed over the memorial and were arrested by police. An online memorial website was launched yesterday and the Doublethink Lab released a report on Chinese disinformation about the Tiananmen Square Massacre yesterday.

Speakers touched on the importance of commemorating Tiananmen Square, despite the massacre having occurred more than thirty years ago. As many speakers were young people, they referenced how they were too young to remember the events of June 4th, 1989, and originally only knew the event as an event in history books—but how they later came to realize as adults the importance of commemorating the event, that the event was not merely history. 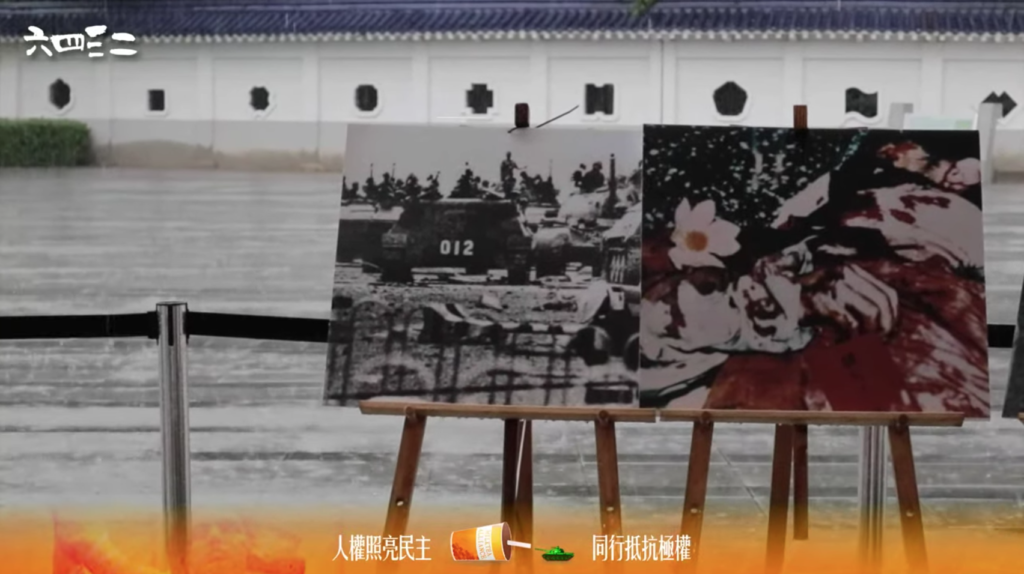 Part of the memorial set up in Liberty Plaza today. Photo credit: Screenshot

Similarly, several speakers called for passing a refugee act to assist individuals seeking to escape Chinese authoritarianism. Taiwan has no formal asylum law or application process, which has particularly become an issue in the past two years when Hongkongers have fled to Taiwan.

The event closed with the event MCs shouting a slogan about the joint struggle against authoritarianism, closing on the point of protests taking place in Hong Kong currently. Meng Nan’s poem was then again read over a video of visitors to the memorial in Liberty Plaza this afternoon.