CIVIL SOCIETY GROUPS marked the 33rd anniversary of the Tiananmen Square Massacre today, as normally takes place in Taiwan annually. As with past years, the commemoration took place in Liberty Plaza, also known as the Chiang Kai-shek Memorial. Nevertheless, last year’s commemoration was online, due to the effects of COVID-19.

Apart from that a stage was set up for speakers, an exhibition was set up on site on Residential Surveillance at a Designated Location (RSDL), a form of detention carried out in special facilities. Artworks by Hong Kong political artist Kacey Wong, who recently relocated to Taiwan, were displayed. In coordination with the event, a website was set up for individuals unable to make the commemoration to express messages. 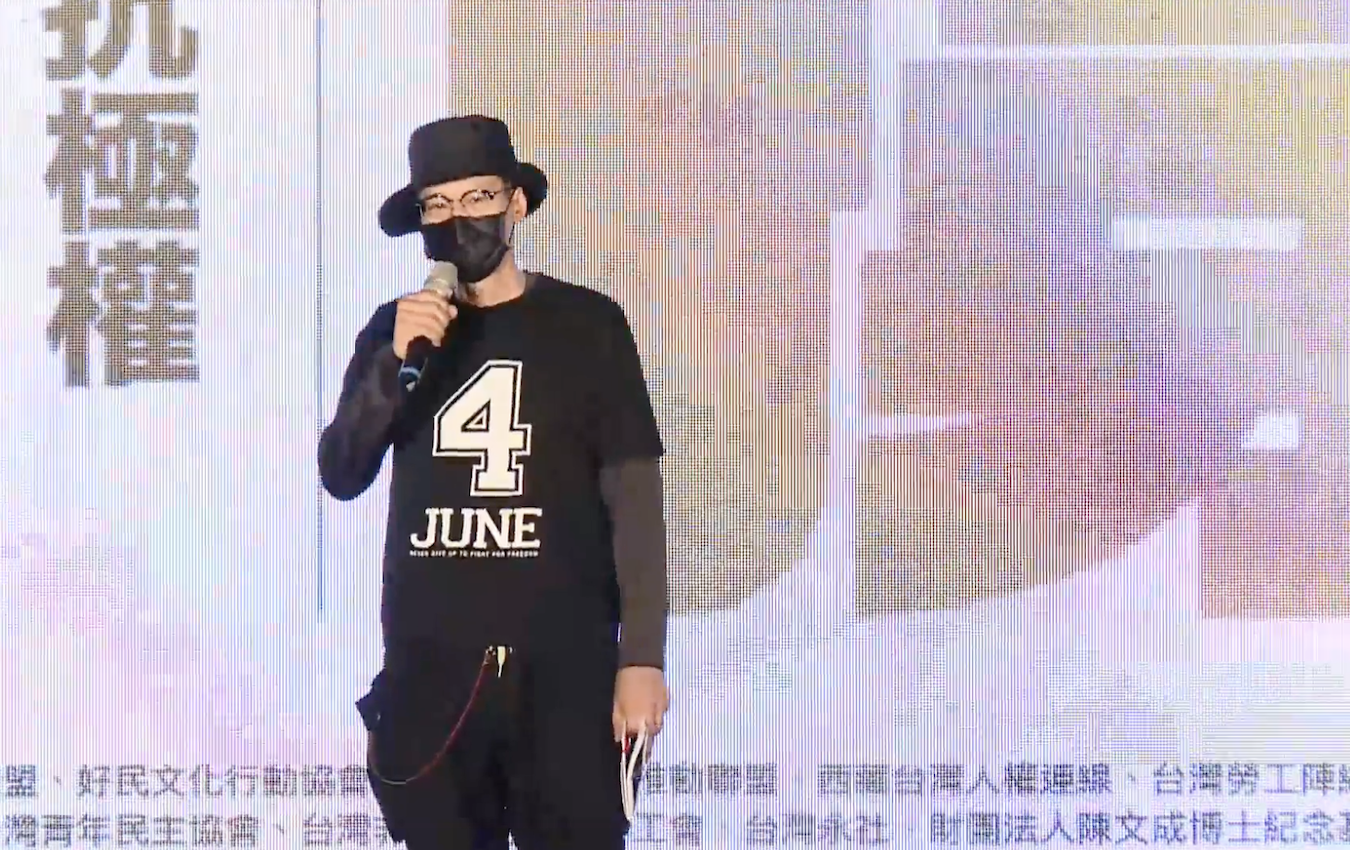 The event began shortly before the planned start time of 6:40 PM. In the afternoon, a screening and discussion of the Hong Kong protest film May You Stay Forever Young, which focuses on the issue of youth suicides after the 2019 protests and is currently screening nationwide in Taiwan, was shown. May You Stay Forever Young is the first feature-length narrative film about the 2019 protests.

As has been the case since 2019, the Tiananmen Square Massacre commemoration touched on the downturn in Hong Kong’s political freedoms since the Hong Kong government attempted to introduce a bill that would have allowed Hongkongers to be extradited to China to face charges. Some of the event’s moderators and speakers were Hongkongers residing in Taiwan. 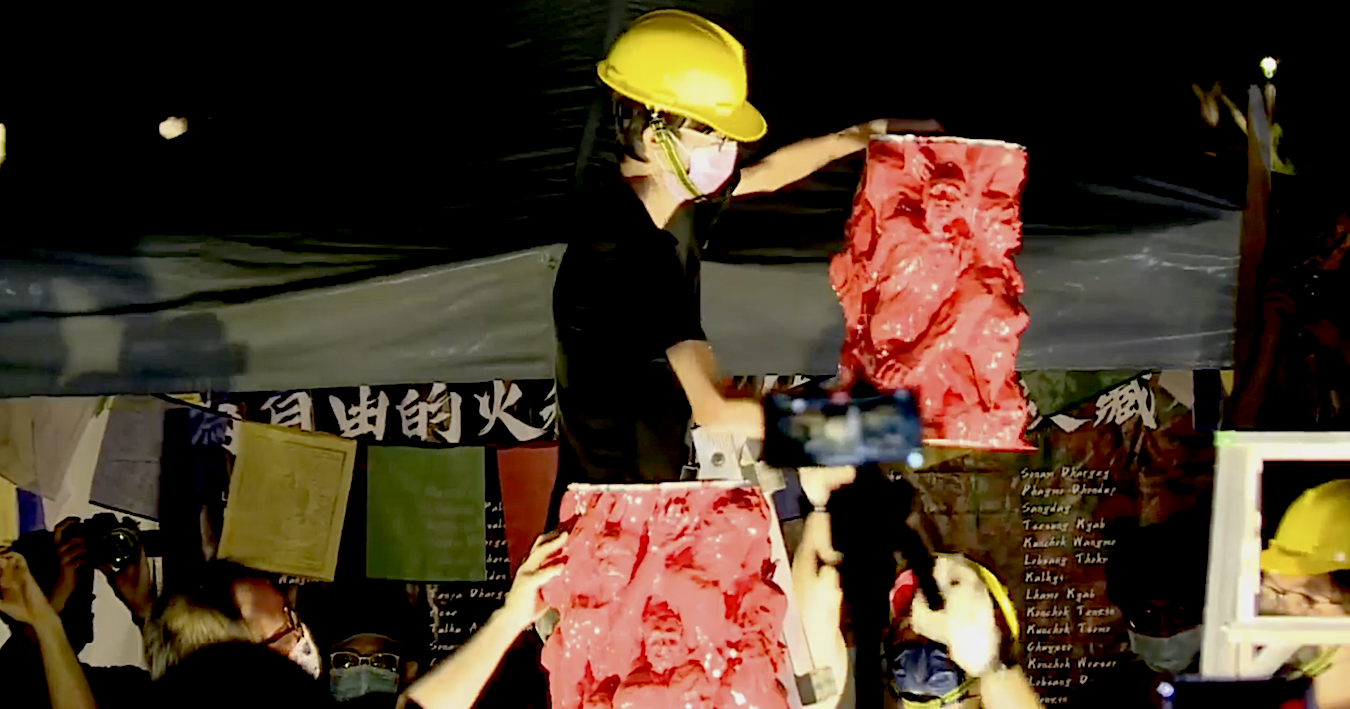 Assembling of the Pillar of Shame replica. Photo credit: Screenshot

Indeed, though contested by localists in recent years, the annual Tiananmen Square commemoration that takes place in Victoria Park is among the largest yearly pro-democracy demonstrations in Hong Kong. Yet in the face of increased political repression and the arrest of protest organizers, the commemoration did not take place this year, with Victoria Park cordoned by police. Pro-democracy groups set up stalls in Causeway Bay instead, though some participants were taken into custody by police. 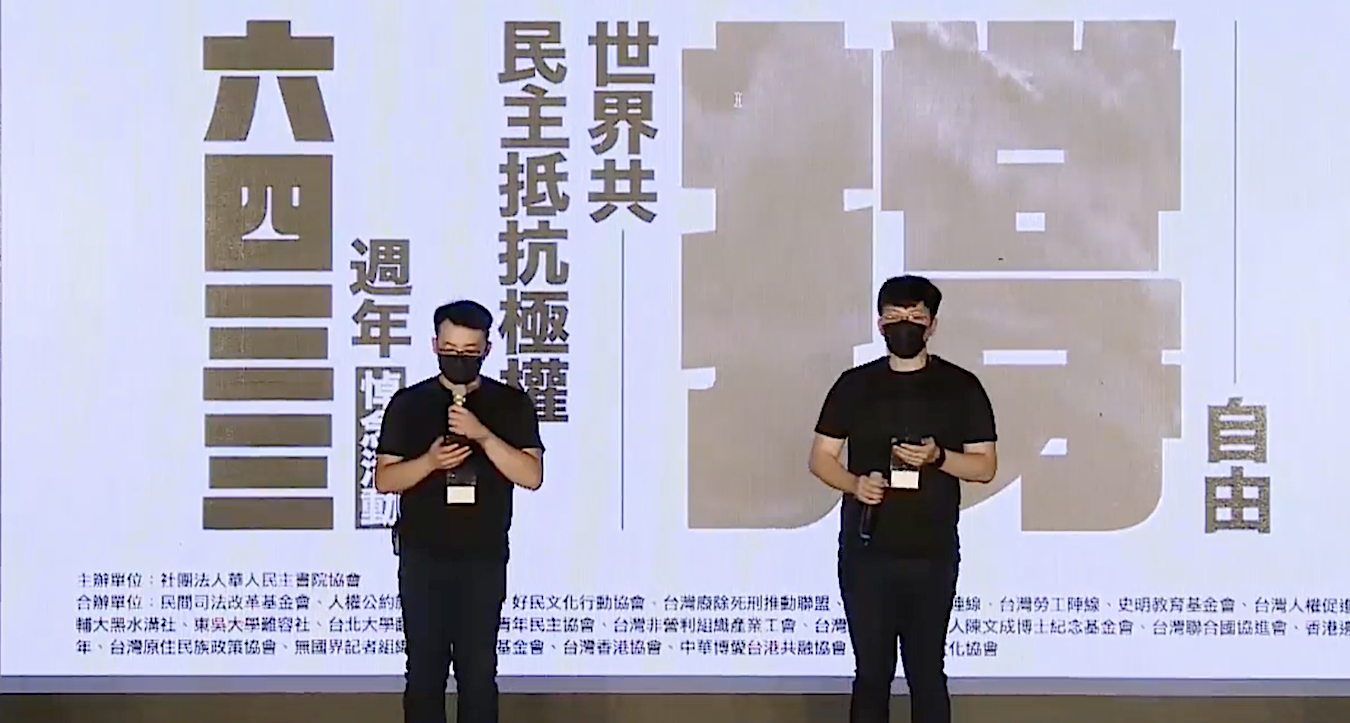 Amnesty International Taiwan executive secretary Chiu Eeling, New School for Democracy head Tseng Jian-yuan, and others were among the Taiwanese speakers. International speakers included Peter Dahlin of Safeguard Defenders, who discussed his experiences as a foreign detainee of RSDL, Reporters Without Borders East Asia bureau head Cédric Alviani and Danish artist Jens Galschiø, the sculptor of the Pillar of Shame.

The Pillar of Shame was a sculpture displayed at the University of Hong Kong to commemorate the Tiananmen Square Massacre. However, the Pillar of Shame was removed and demolished in December 2021, though Galschiø and others called for the statue to be relocated to Taiwan. A three-meter reproduction of the Pillar of Shame created through 3D printing was unveiled at the event today, as assembled in multiple segments by representatives of Taiwan including students, Kacey Wong, and Tseng Jian-yuan, with Galschiø expressing his approval of the action.

Lee Ming-che, the Taiwanese human rights activist who was detained by the Chinese government for five years on charges of “subverting state power” and was only released in April, made an appearance at the commemoration. This is one of first times that Lee Ming-che appeared at a public event since his return to Taiwan. 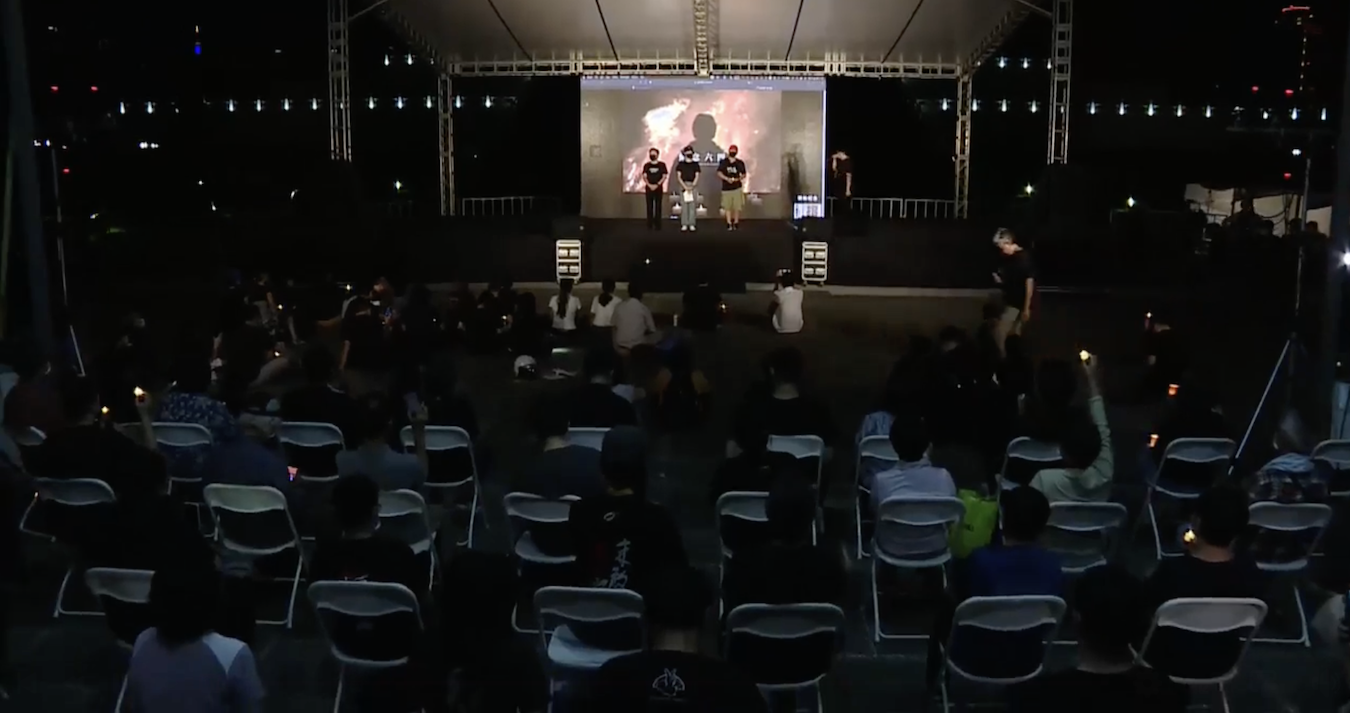 Taiwan’s Tiananmen Square Massacre commemorations were articulated as not only for Taiwan, but also for Hong Kong and China. Continuing such parallels, a statement by the Association for Taiwan Indigenous Peoples’ Policies compared the CCP’s present-day policies towards “ethnic minorities” to the KMT’s historical treatment of Indigenous, as well as the KMT and CCP’s attempts to incorporate Taiwan into a greater pan-China narrative. In particular, former Sunflower Movement activists Wu Cheng and Miao Poya, who later became politicians, brought up the issue of commemorating the Tiananmen Square Massacre as Taiwanese that did not view themselves as Chinese. Both emphasized the point that their concern with events that affected non-Taiwanese, such as Tibetans, Uyghurs, Hongkongers, Ukrainians, and Chinese, was due to their confidence in their sense of Taiwanese identity.

More broadly, the struggle over historical memory of the Tiananmen Square Massacre continues in Taiwan. Former president Ma Ying-jeou of the KMT took the opportunity to lash out at the Tsai administration today with a statement on Facebook that was framed as about the Tiananmen Square Massacre but lashed out at the Tsai administration with the claim that the under Tsai’s leadership had become an “illiberal democracy” and “elected dictatorship.” The statement cited comments by Chinese president Xi Jinping approvingly.

Shortly after 8 PM, a 64-second moment of silence was held for the deceased. The event closed with a video message from an Uyghur organization in Japan and a speech by the Human Rights Network for Tibet and Taiwan and ended just before 10 PM.