A VIGIL COMMEMORATING the 31st anniversary of the Tiananmen Square Massacre took place in Liberty Plaza in Taipei today. According to organizers, over 2,000 were present. The vigil began at 8 PM and ended at 10 PM.

The vigil is one of the largest protests to take place in past months, given restrictions on public gatherings because of the ongoing COVID-19 pandemic. However, the demonstration was still smaller in size than the Tiananmen Square commemoration last year, which marked the 30th anniversary of the Tiananmen Square Massacre, and the event was smaller in scale, as there was also an academic conference and exhibition in 2019. 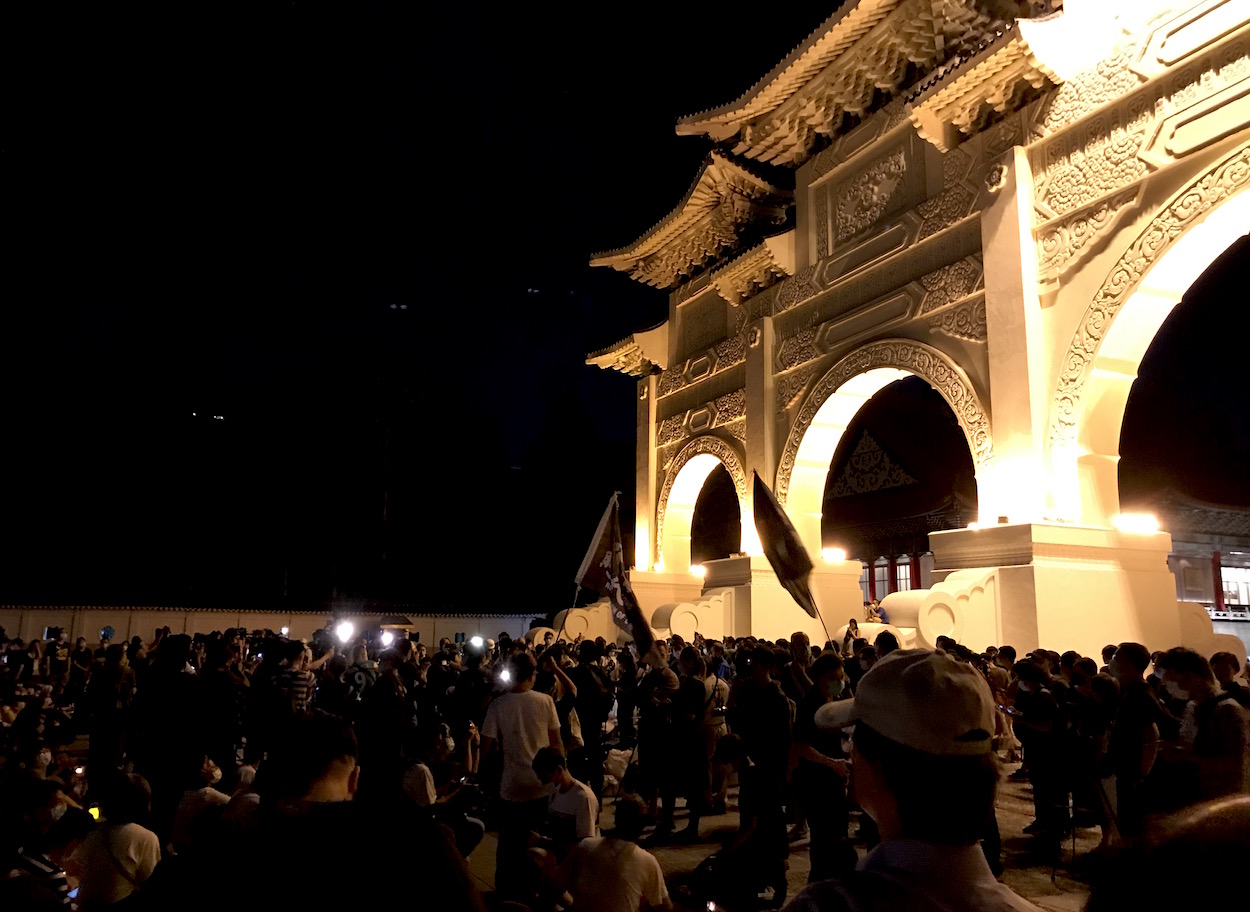 Several other Tiananmen Square commemorations also took place earlier in the day, such as a commemoration outside the Fu Bell on the National Taiwan University campus (NTU). The Fu Bell memorializes NTU’s first President, Fu Sinian, a Chinese May 4th Movement intellectual who later sought to protect NTU students from the 228 Massacre later in life.

The Tiananmen Square Massacre is commemorated annually in Liberty Plaza in Taipei. Liberty Plaza is where the Chiang Kai-Shek Memorial is located, but has also historically been a frequent site of protest for Taiwanese social movements. This includes the 1990 Wild Lily Movement, a weeklong student occupation that was a pivotal moment in Taiwan’s democratization, as well as other events, such as the 4-5-6 Movement (四五六運動), a weekly anti-nuclear demonstration that took place in the year before the outbreak of the 2014 Sunflower Movement. 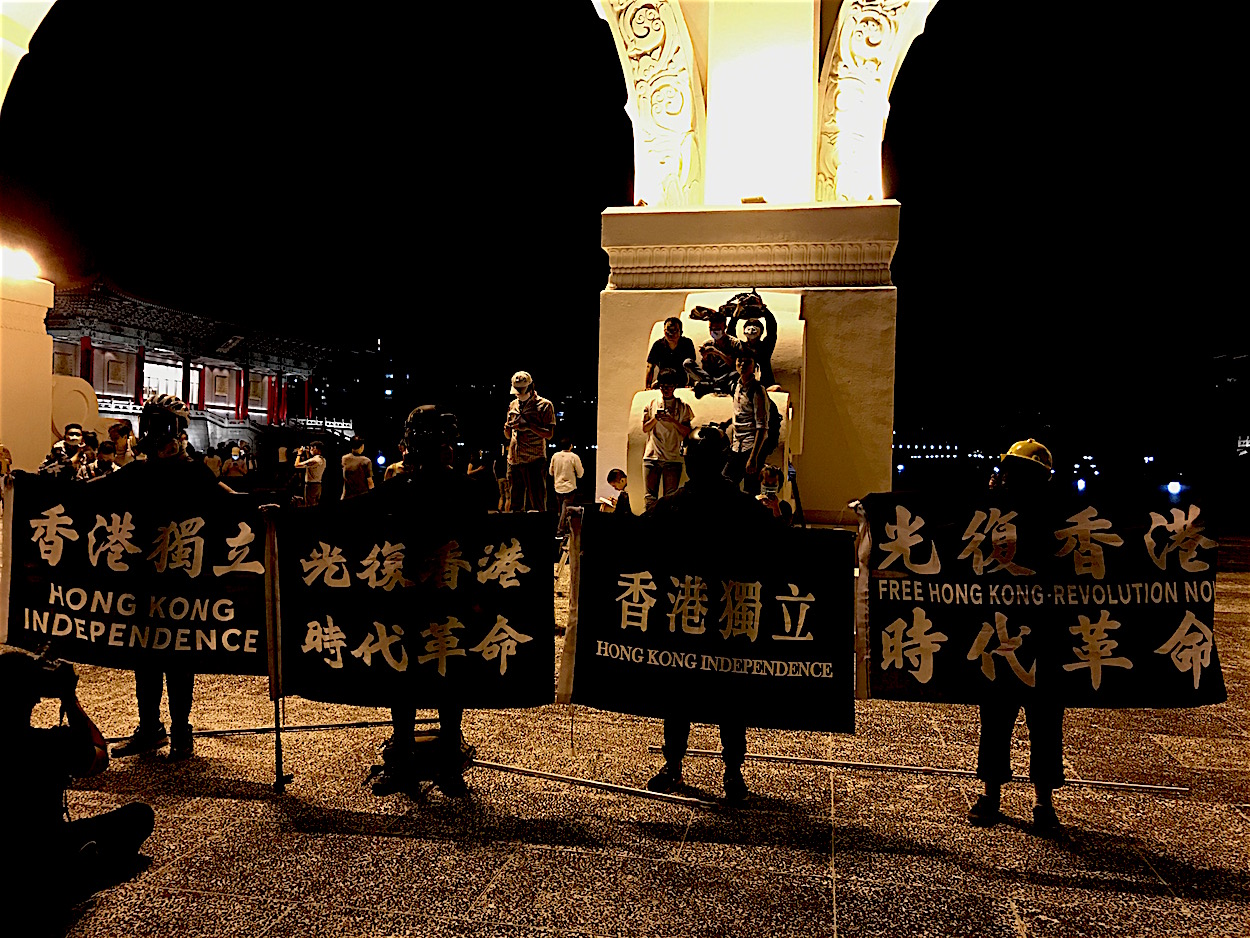 Given the ongoing protests that have taken place in Hong Kong for the past year, which have begun to resume with the COVID-19 situation under control in Hong Kong, much of the commemorations this year were focused on Hong Kong. The Tiananmen Square vigil in Taipei this year takes place during the first year ever in Hong Kong in which the annual Tiananmen Square commemoration was banned by the government. Although the Hong Kong government claimed that the commemoration was banned because of measures to prevent the spread of COVID-19, this is believed to simply be a pretext by the Hong Kong government. At press time, clashes are taking place in Hong Kong because demonstrations took place in spite of the government refusal to give permission for any official commemoration. Adding insult to injury, the Hong Kong legislature also criminalized mockery of the Chinese national anthem today, despite attempts by the pan-democratic camp to prevent the bill from passing in previous months.

This year’s Tiananmen Square commemoration was different from past years. Instead of a set program with speakers, musical performers, and a stage, there was no stage and a small microphone system was used instead. There was no specific organization that called for the gathering, though members of different organizations assisted as volunteers, and advertising for the event was minimal. Individuals were given five minutes in which to speak or perform, with the claim that this was in the spirit of the Hong Kong protests having no “big stage” (大台) or leader. Past protests in Liberty Plaza, such as the 4-5-6 Movement or activist comedian Indie DaDee’s “Big Bowel Blossom Forums” (大腸花運動) during the Sunflower Movement followed a similar format in which anyone was allowed to speak. Unlike past years, there were relatively few politicians present at the commemoration. 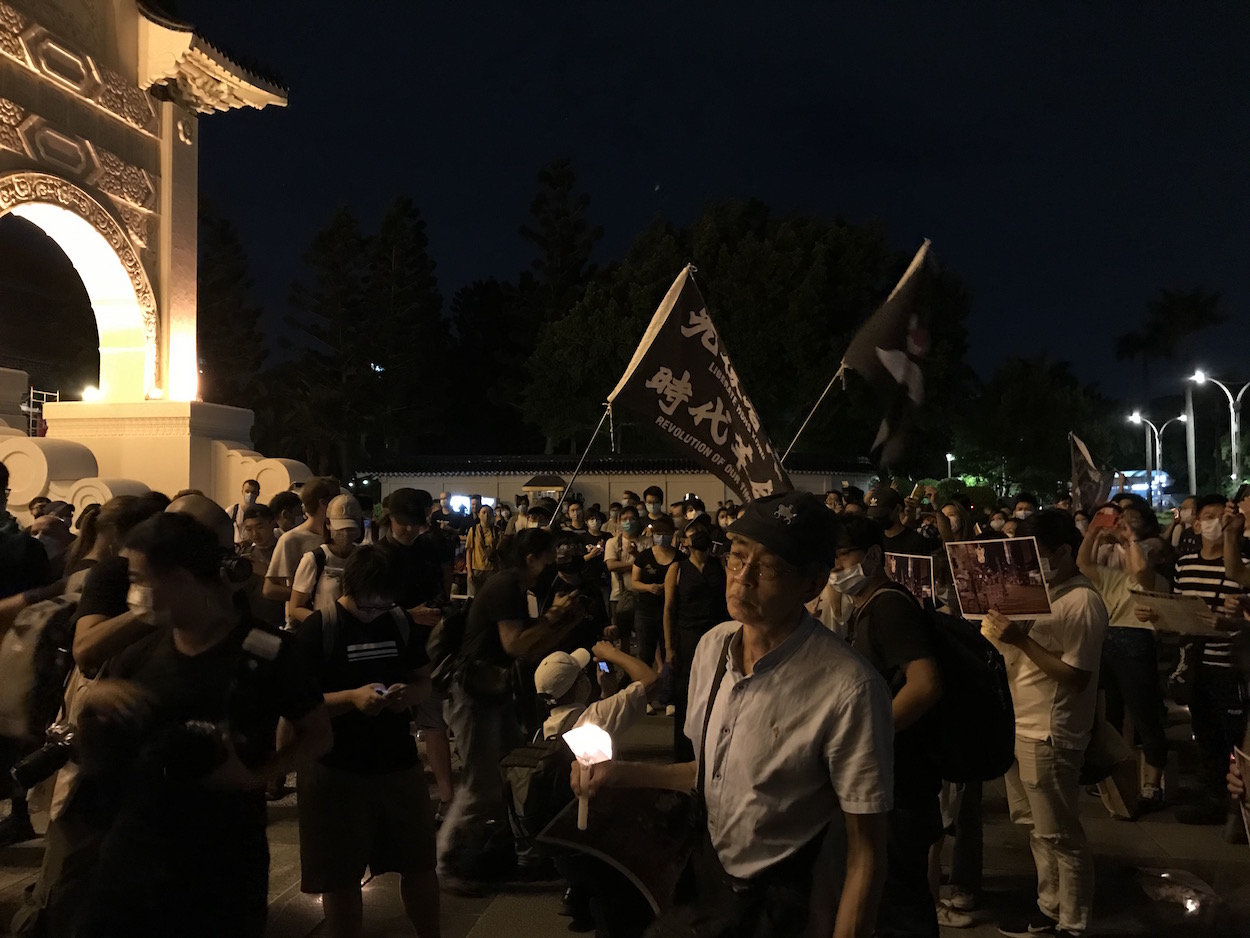 Many of the speakers at the event were Hongkongers residing in Taiwan, including Lam Wing-kee, the only one of the Causeway Bay booksellers to remain free, and who recently reopened Causeway Bay Books in Taipei. Likewise, half a dozen individuals wore gas masks, black clothing, and other hallmarks of Hong Kong demonstrators, and waved Hong Kong independence flags. Individuals wearing “full gear” are an increasingly common sight at protests in Taiwan.

A frequent chant from the crowd was “Restore Hong Kong, Revolution of Our Times” (光復香港，時代革命). During the commemoration, Hong Kong protest songs such “Glory to Hong Kong” (願榮光歸香港), which became a “national anthem” for the Hong Kong protests in the past year, and “Flower of Freedom” (自由花), which is sung at the Victoria Park commemoration every year, were among those sung. Taiwanese protest songs such as “Meilidao” (美麗島) and “Island’s Sunrise” (島嶼天光) were sung. At one point when a speaker shouted “Restore Kaohsiung” (光復高雄), referring to a slogan of the recall vote set to take place over the weekend in against Kaohsiung mayor Han Kuo-yu, the crowd cheered loudly. 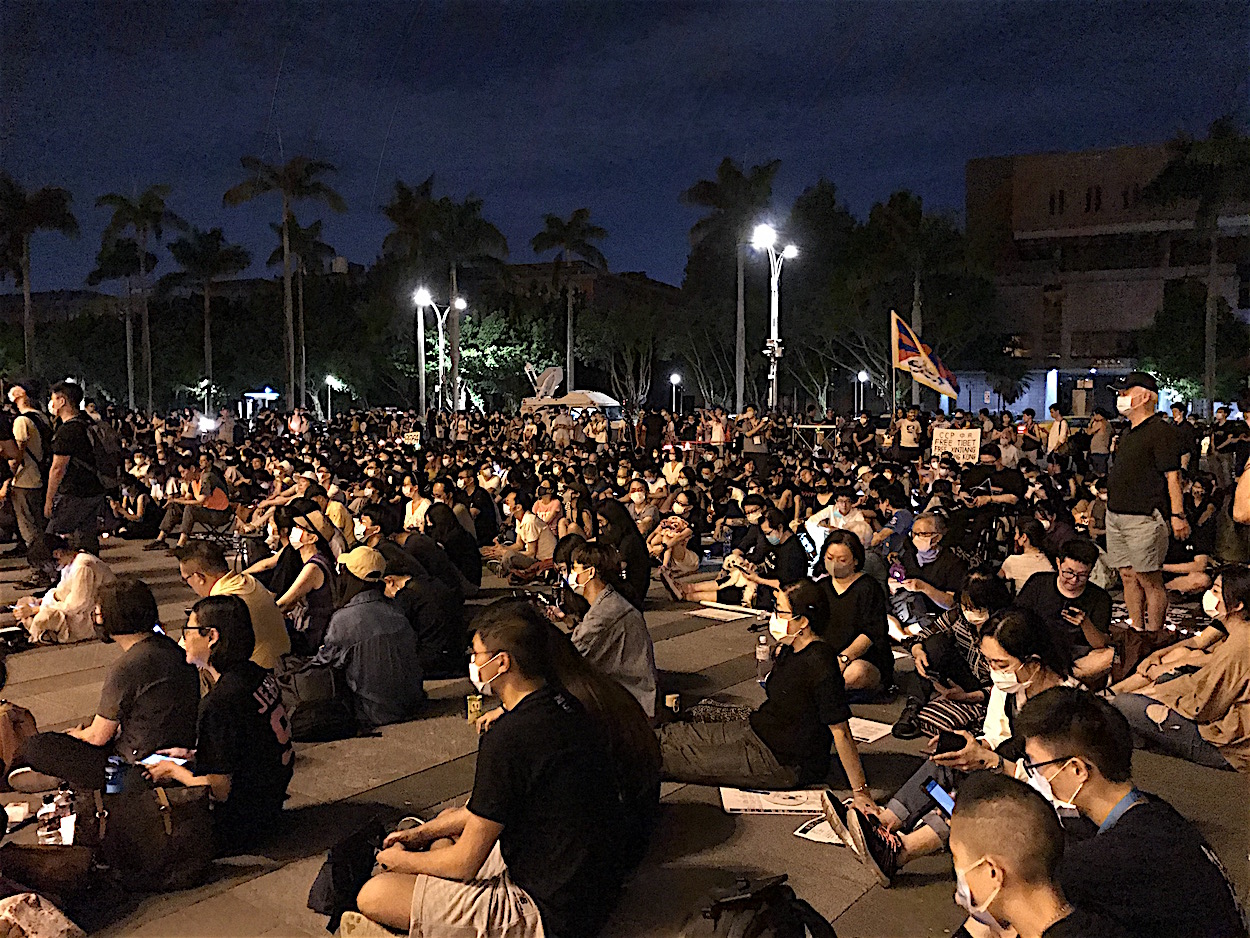