Before the commemoration at Liberty Plaza tonight, a large-scale conference on Tiananmen Square was held from May 18th to May 20th at National Taiwan University. Speakers included Tiananmen Square survivors such as Wuerkaixi, Wang Dan, Wu Renhua, Yang Jianli, Fang Zheng, and others. Li Xiaoming, a member of the People’s Liberation Army involved in the imposition of martial law in Beijing who later became a democracy activist later in life, also spoke. 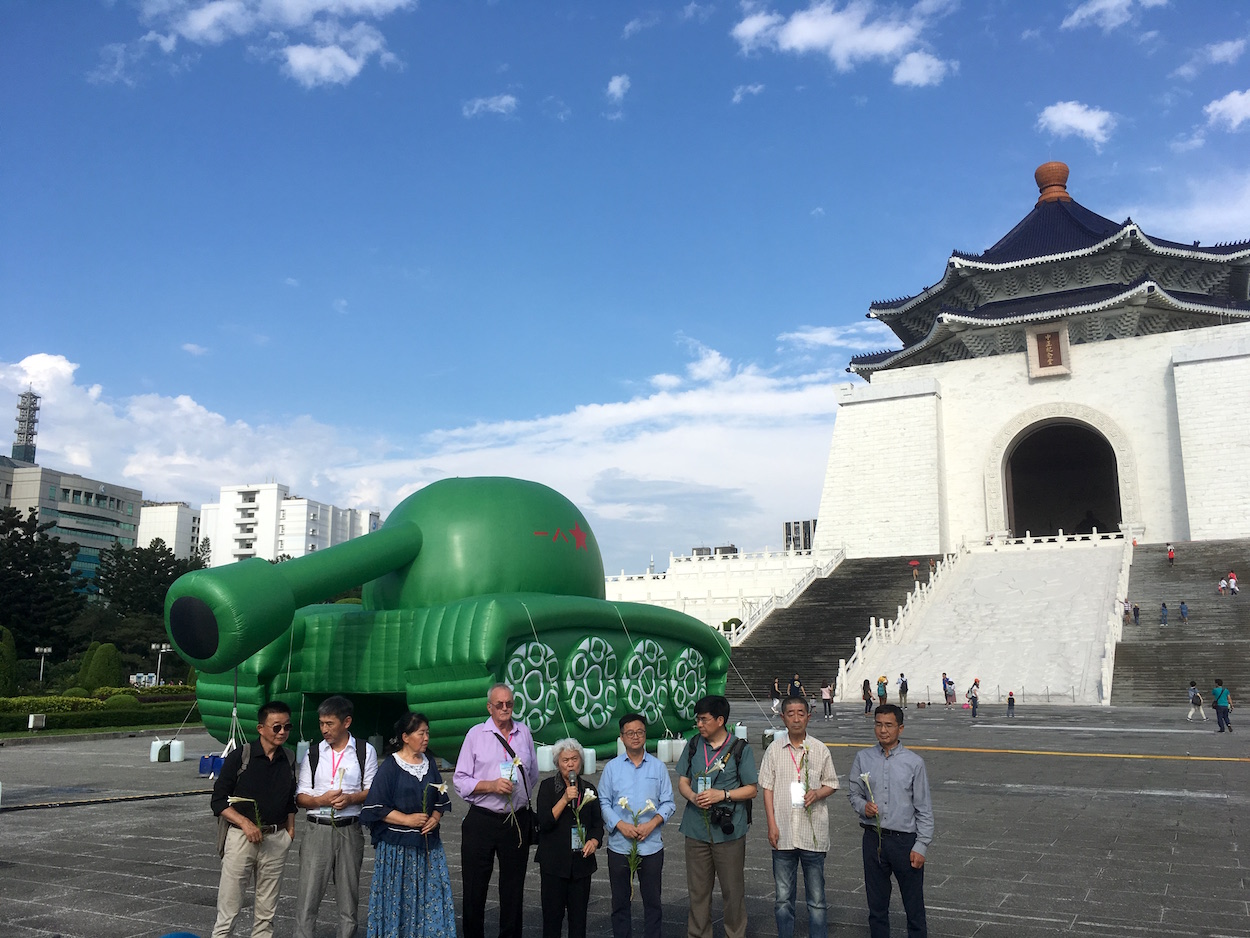 International scholars and researchers such as Larry Diamond, Jean-Philippe Béja, Michel Bonnin, Perry Link Jr., and pro-democracy Hong Kong politicians such as Albert Ho Chun-Yan, formerly of the Democratic Party, and Joseph Cheng Yu-shek, formerly of the Civic Party and Alliance for True Democracy and Power for Democracy, were also present. To this extent, Sunflower Movement activist Shih I-lun and Umbrella Movement student leader Alex Chow co-presented a paper at the conference, and Taiwanese reporter Hsieh San-tai spoke about his experiences photographing the Tiananmen Square demonstrations for 40 days.

Much international attention has centered on a massive inflatable sculpture of the famous Tank Man photograph constructed by the Taiwanese artist Shake put up in past weeks, the installation based on a drawing of Tank Man by the contemporary Chinese dissident artist, Badiucao. Likewise, an exhibition was held at the Chiang Kai-Shek Memorial commemorating the Tiananmen Square anniversary, running from May 24th to June 5th. The exhibit, entitled “Back to Tiananmen: Memory as a Form of Resistance”, primarily displayed newspaper clippings from both Chinese and Taiwanese newspapers in the years before and after the Tiananmen Square Massacre, the works of Badiucao, as well as footage of the Tiananmen Square occupation. 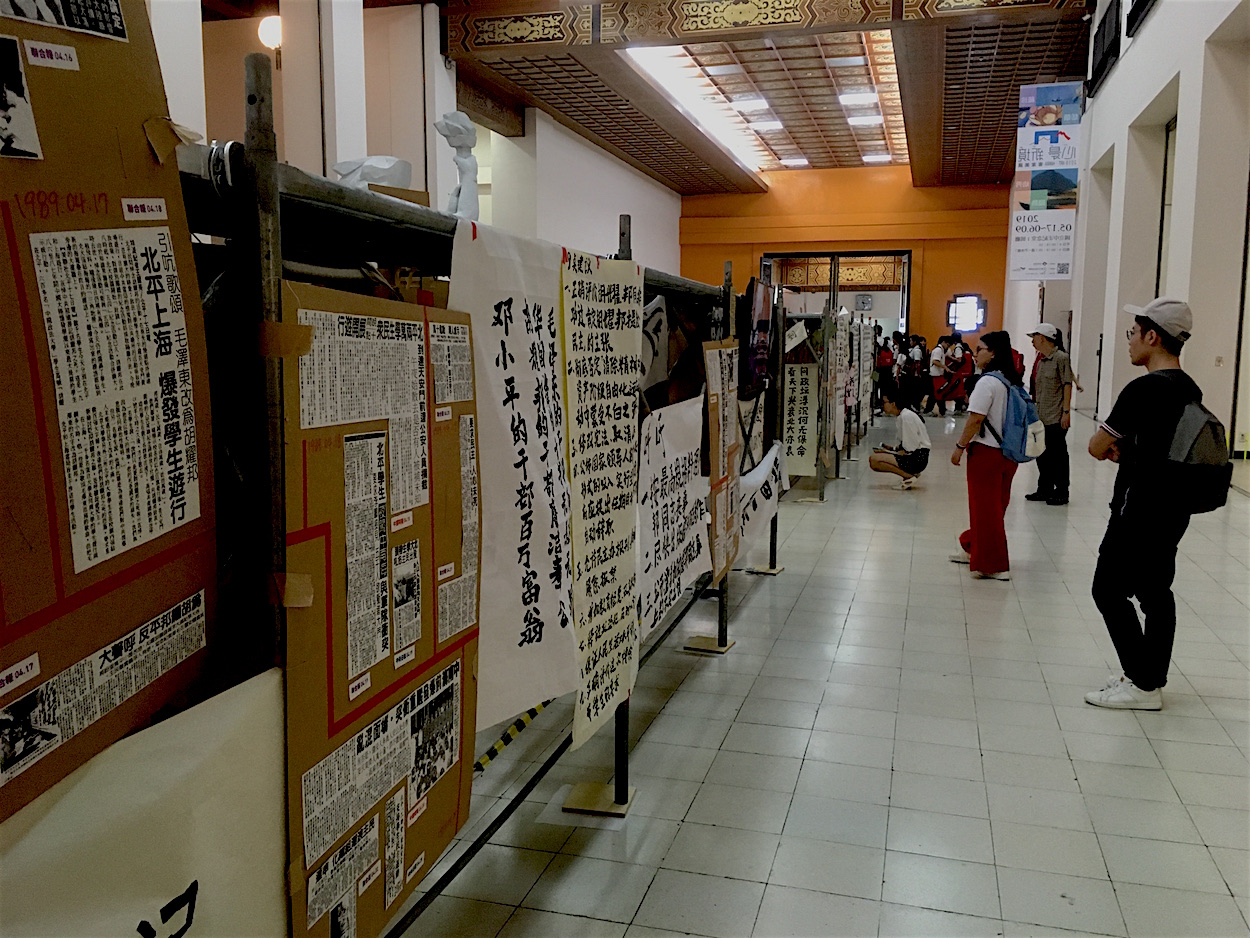 Namely, the Tiananmen Square Massacre took place at a time during which martial law had been lifted in Taiwan, but before democratic elections were opened up. The exhibit also featured recreations of protest banners from the Tiananmen Square occupation, flyers for Badiucao’s QR-code based #TankMen2018 protest art campaign last year, and a replica of the “Goddess of Liberty” statue constructed in Tiananmen Square by students. Musical performances were also held occasionally in the exhibition.

Earlier this afternoon at approximately 4 PM, the DPP held a press conference outside the Tiananmen Square Memorial with DPP secretary-general Luo Wen-chia speaking alongside a group of Tiananmen Square survivors as they held white lilies, linking the Tiananmen Square demonstrations to the Wild Lily movement that took place in Taiwan a year after it, as a seminal event of Taiwan’s democracy movement. Earlier today, DPP spokesman Lii Wen published an editorial regarding Taiwan, Hong Kong, and Tiananmen Square in the Apple Daily. 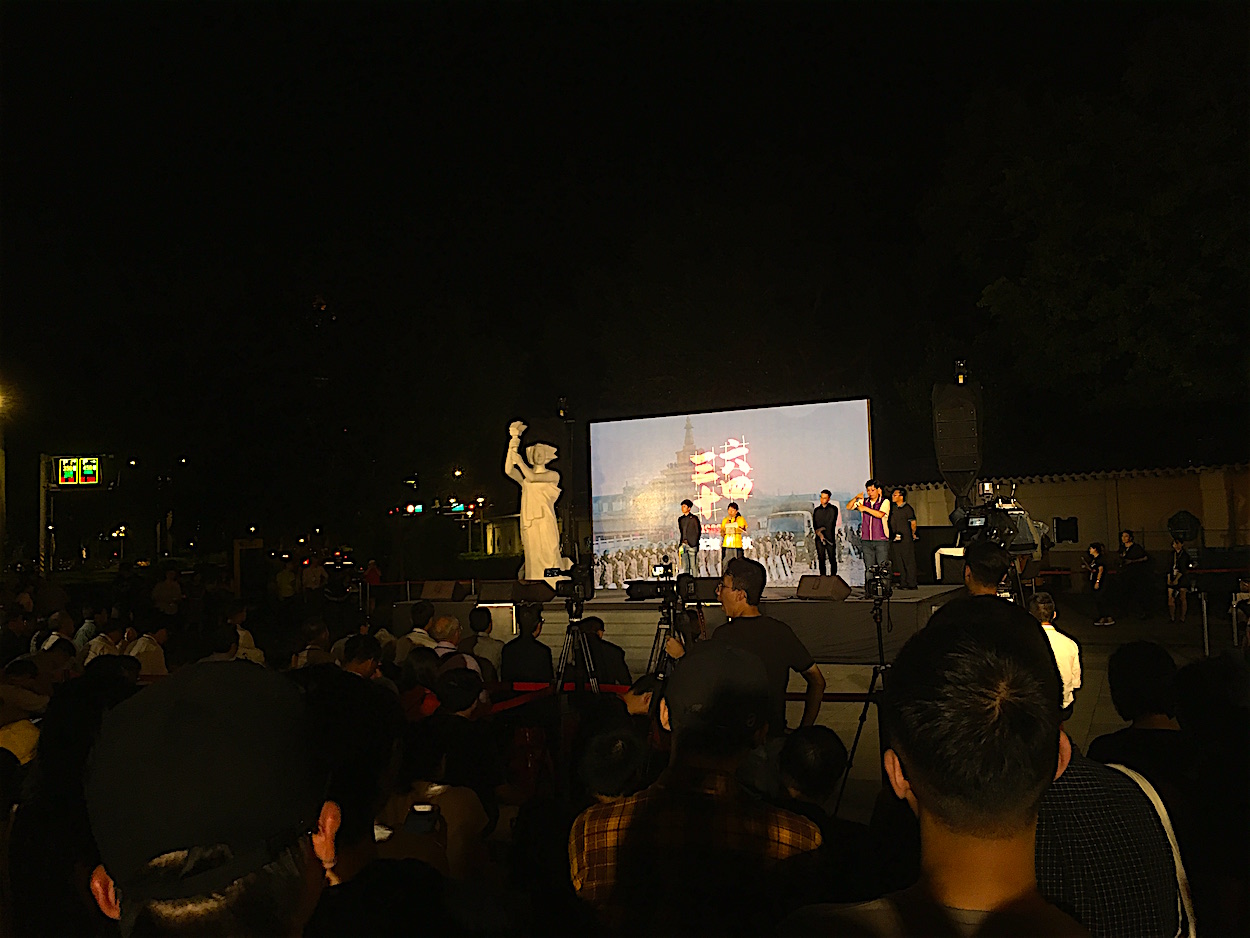 The stage for the commemoration. The Tiananmen Square goddess of freedom statue replica is visible on the left. Photo credit: Brian Hioe

Tiananmen Square survivors spoke of tanks running over students and the corpses of student demonstrators being doused with gasoline and burned during the massacre, referred to Taiwan as the hope of the ethnic Chinese world. Survivors discussed visiting White Terror memorial such sites such as the burned out offices of political dissident Nylon Deng, and called on the Taiwanese people to vote for the party which is most able to resist Chinese attempts at political infiltration and safeguard Taiwan’s democratic freedoms.

Vice president Chen Chien-ren gave a speech on behalf of the government. Former premier William Lai, who is currently contending with current president Tsai Ing-wen for the DPP’s presidential nomination, made a brief appearance though he left without giving any speech. The event was MCed by former Sunflower Movement activist Lin Fei-fan and Social Democratic Party city councilor Miao Po-ya. Lee Jia-bao, a Chinese student currently seeking political asylum in Taiwan, was also present as a participant in the commemoration. 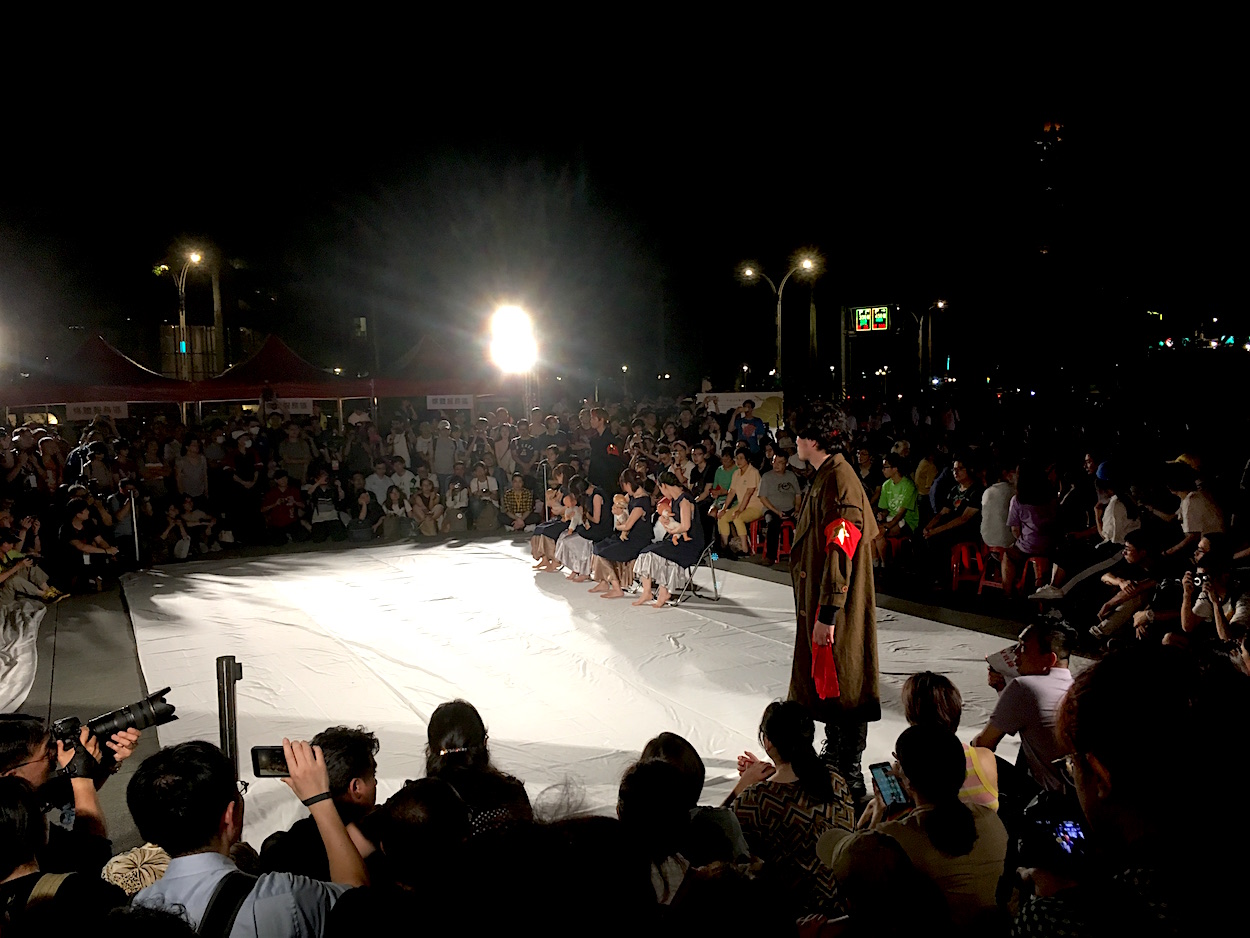 Representatives of Third Force parties such as the NPP and SDP were present, as were civil society groups as Covenants Watch, Taiwan Association for Human Rights, Judicial Reform Foundation, the New School for Democracy, the Human Rights Network for Tibet and Taiwan, and the Taiwan Alliance to End the Death Penalty.

Talks at the commemoration connected the plight of Taiwan, Hong Kong, and China, reflecting on the similarities between Taiwan’s 228 Massacre and the Tiananmen Square Massacre, and discussing the detention of Taiwanese human rights activist Lee Ming-che in China, who has been imprisoned for two years.

Speakers also reflected on the deterioration of political freedoms in Hong Kong in past years, as observed in the arrest of political dissidents, disqualification of pro-democracy politicians, and a new extradition law which could allow for the deportation of Hong Kong residents directly to China. It was raised that Hong Kong took a different path than China after the Tiananmen Square Massacre and that neither Hong Kong or Taiwan hope to become a place similar to China, in which residents had to fear food poisoning from milk powder or might face up to a decade in prison for writing works of queer literature.  Taiwanese were called upon to reject the formula of “One Country, Two Systems” as a formula for unification with China. 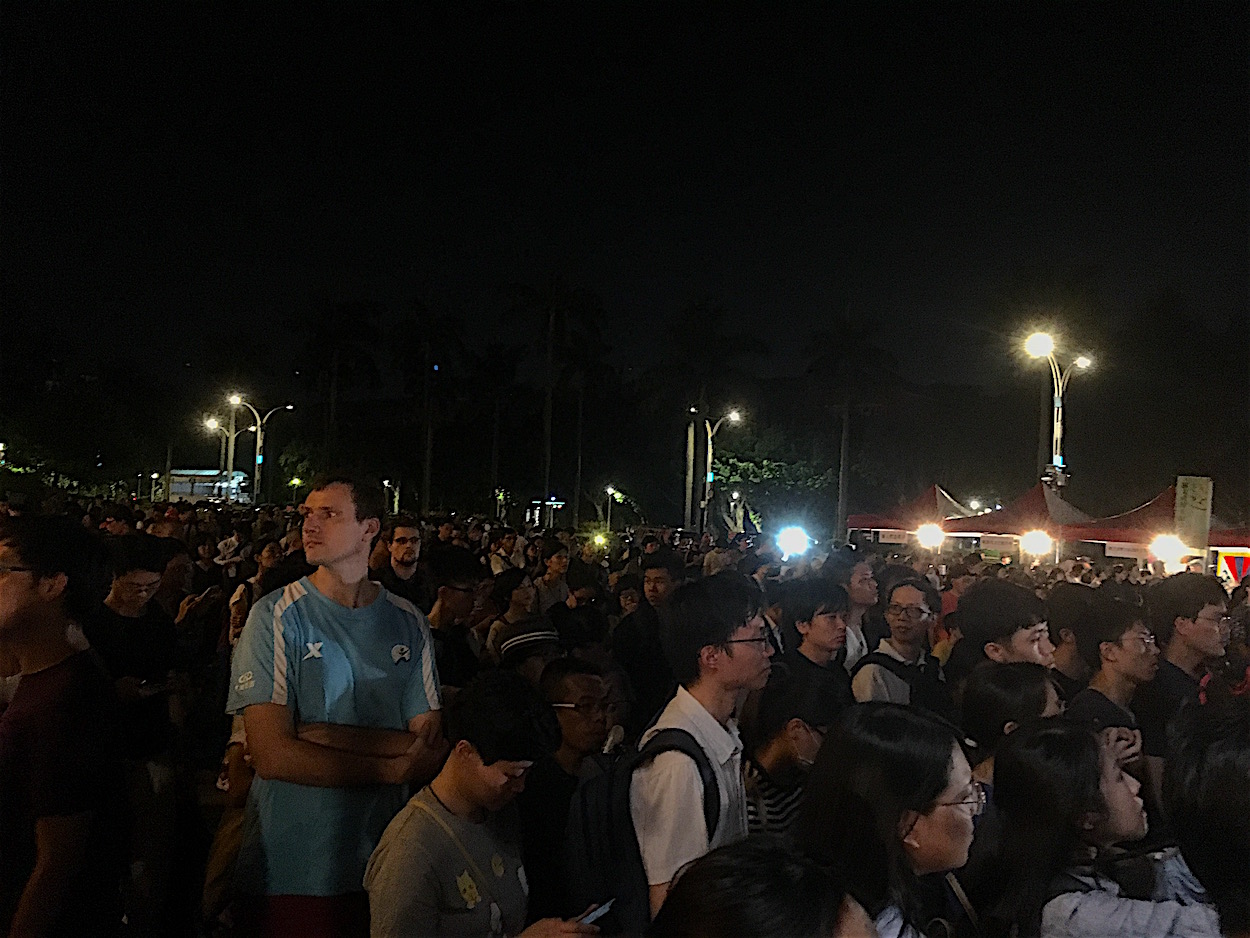 Unfortunately, China tightened restrictions on political freedom in the previous weeks, in order to prevent any possible outbreaks of protest. This includes the disappearance of the folk singer Li Zhi, who sang about the Tiananmen Square demonstrations, restrictions on online commenting on Chinese websites including streaming platform Bilibili, the suspension of the social media accounts of political dissidents, and automatically censorship of search terms or social media posts referring to Tiananmen Square.

Apart from the arrest of political dissidents who tried to commemorate the anniversary, such as through changing the labels on alcohol bottles, Tiananmen Square itself has been shut down today. Surprisingly, state-run media actually referenced the events of the massacre this year, except only to justify the military crackdown on demonstrators as justified.

Much outrage internationally, has focused on what has been generally read as self-censorship by western tech companies in the days leading up to the Tiananmen Square anniversary. Over 1,000 Chinese political dissidents using Twitter were banned from the social media platform in the days before June 4th, though Twitter claimed that this was because of mistaken anti-spam algorithms. YouTube reportedly also removed videos of the Tiananmen Square demonstrations and the literary journal Cha had its WordPress.com account temporarily suspended. 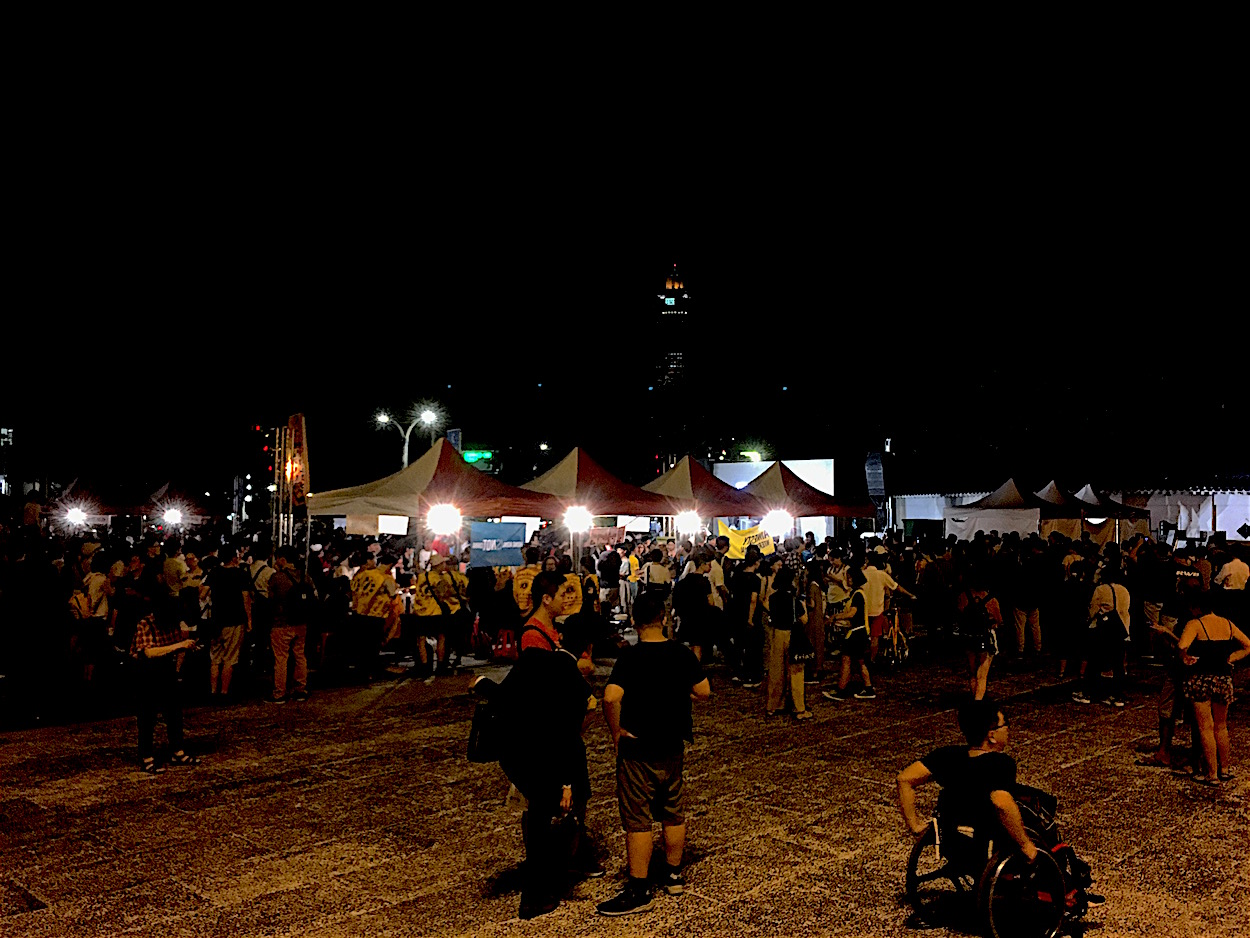 One notes also that with the 30th anniversary of the Tiananmen Square Massacre, many international reflections have focused on those left out of the master narrative of June 4th which has dominated for the last thirty years. As such, attempts have been made to call attention to that the Tiananmen Square occupation sparked off protests across all of China, with mass killings possibly also taking place outside of Beijing—yet this remains hard to confirm, given the restrictions on information in China which make it to investigate a historical event which took place just several decades ago.

Moreover, it has been pointed out that despite the focus on student demonstrators, the majority of those who participated in these demonstrations were workers—and, as a result, the majority of victims of the killings were also workers. Challenges have also been made to the popular narrative that contemporary Chinese youth are complacent, and are completely unaware of the events of June 4th.

Commemorations outside of China took place in not only Taiwan but also Hong Kong. A banner drop took place on Hong Kong’s iconic Lion Rock today reading, “Do not forget June 4th,” and washed the Pillar of Shame statue commemorating the killings as a symbol of keeping the memory of the Tiananmen Square Massacre alive. 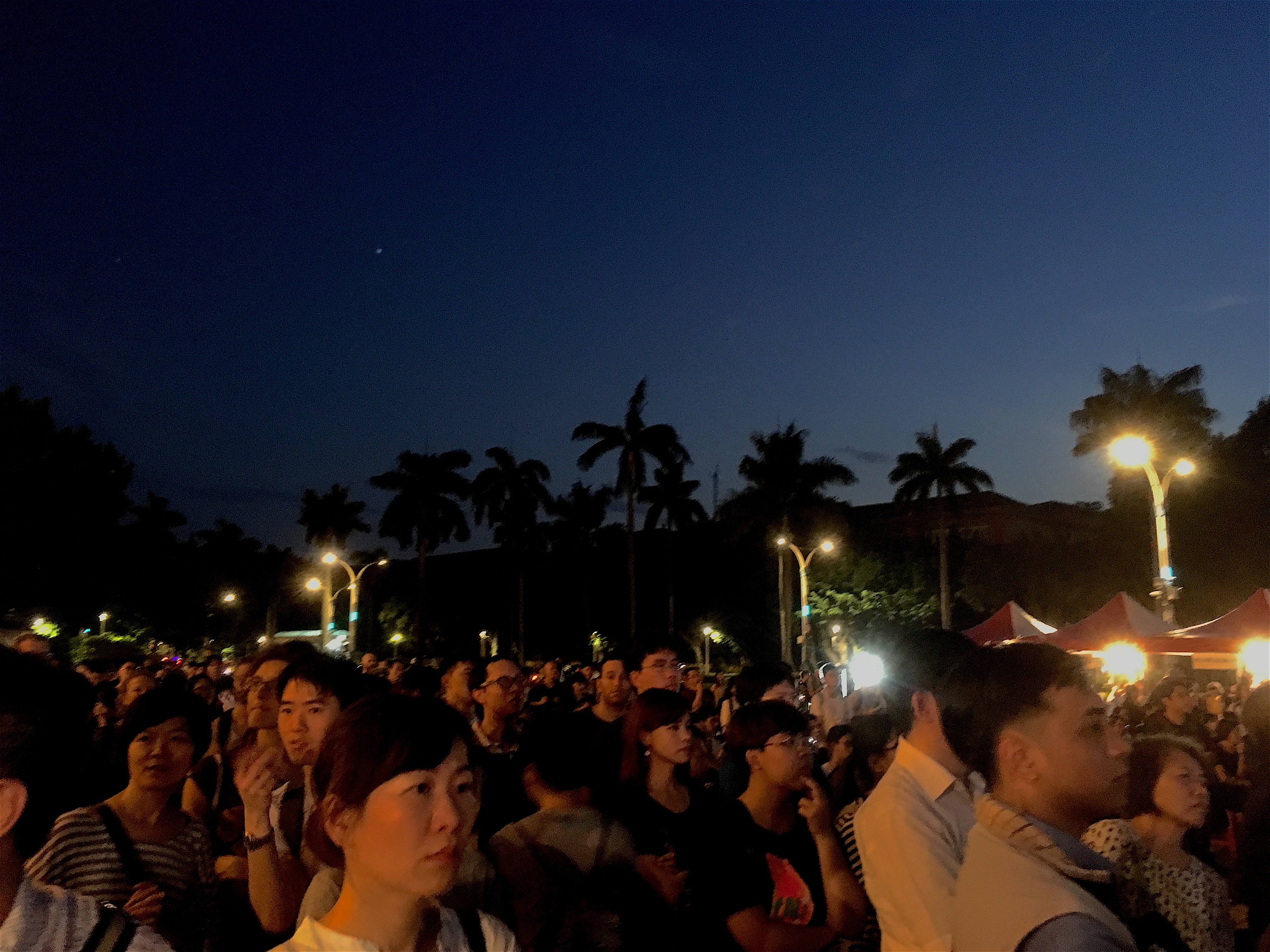 Thirty years after the Tiananmen Square Massacre, Tiananmen Square shows no sign of being forgotten in Taiwan—at least for those conscious of the threat that the Chinese government poses to democratic freedoms. Yet, as in past decades, it ultimately still proves a question as to how the call the Chinese party-state to answer for its past crimes and to ensure that the sacrifices made by students, workers, and others thirty years ago were not in vain.