MIGRANT WORKER groups gathered outside of the Executive Yuan this morning to hold a small rally. Between thirty to fifty were in attendance. The rally began at 10 AM and lasted until just after 11 AM. 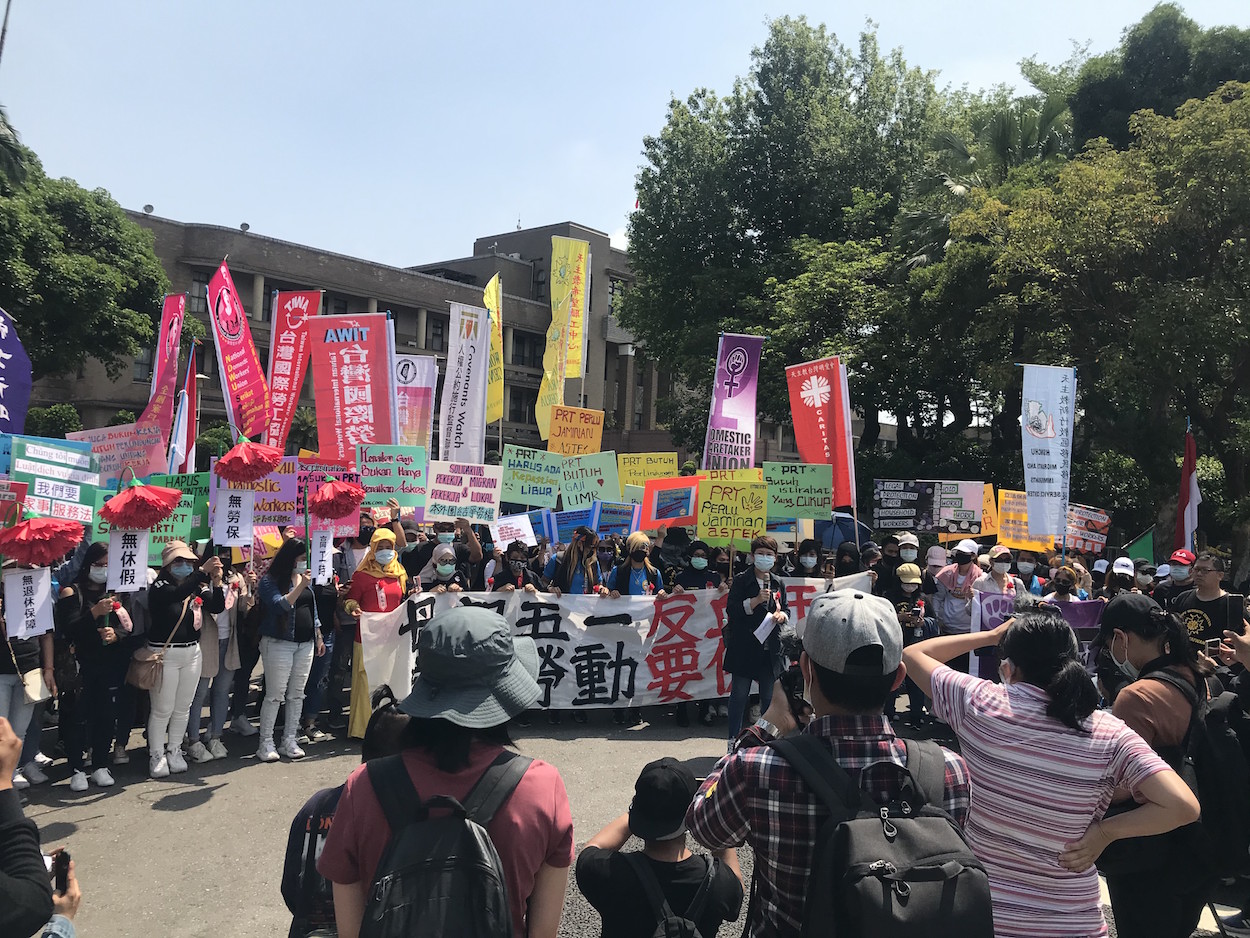 The rally was held to coincide with International Workers’ Day, which takes place yearly on May 1st and saw thousands demonstrate yesterday on Ketagalan Boulevard. However, many migrant workers only have Sundays off, if at all, and May 1st fell on a Saturday this year. While there is usually an annual rally for migrant workers that takes place on the same day as commemorations of International Workers’ Day, given this inconvenient timing, this is why the migrant workers’ rally was rescheduled to Sunday this year.

In particular, migrant worker groups also highlighted that the timing of the rally today also coincides with Mother’s Day, which is next Sunday. Many migrant workers—particularly those that work taking care of Taiwan’s growing elderly population—are mothers. As a result of working in Taiwan, they spend many years separated from their children, working meager wages and long hours.

As brought up by speakers, which included representatives of migrant workers from the major countries that Taiwan hired from and migrant worker organizers, migrant workers that work taking care of the elderly are frequently called on to work 24/7. Even if it so happens that their employers allow them to have days off, there would be nobody to take care of their elderly charges, resulting in their continuing to work around the clock, with no days off.

Despite this, domestic workers in Taiwan are paid little for their work, making around 17,000 a month. Migrant workers also see deductions from their already meager salaries from the broker agencies that arrange for their employment in Taiwan; in past years, migrant worker groups have called for the abolition of the broker system and the institution of direct government-to-government hiring. 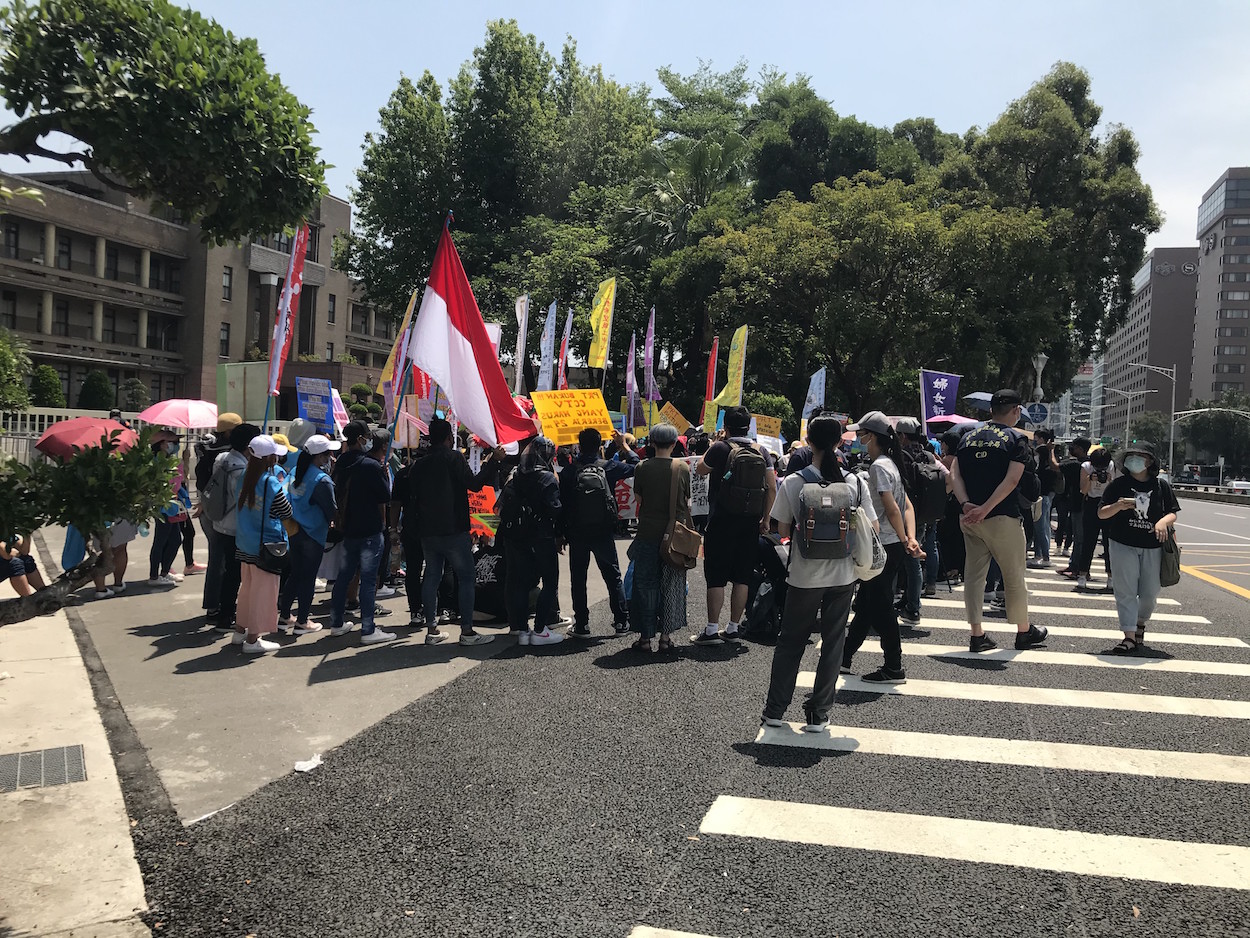 Migrant workers frequently face abuse in the workplace. This often comes from their Taiwanese employers, who do not allow them any days off, or in the form of sexual harassment or violence. When this occurs, migrant workers face difficulties finding assistance, given the lack of multilingual government hotlines or other forms of government recalcitrance.

One notes, too, that apart from salary caps, migrant workers in Taiwan are not allowed to stay beyond the term of their work, nor are they allowed to bring their families to Taiwan. As raised by speakers today, while one in ten elementary or middle school children in Taiwan has a foreign-born parent, migrant mothers in Taiwan are frequently denied access to their children, and have little legal recourse in the event of divorce. 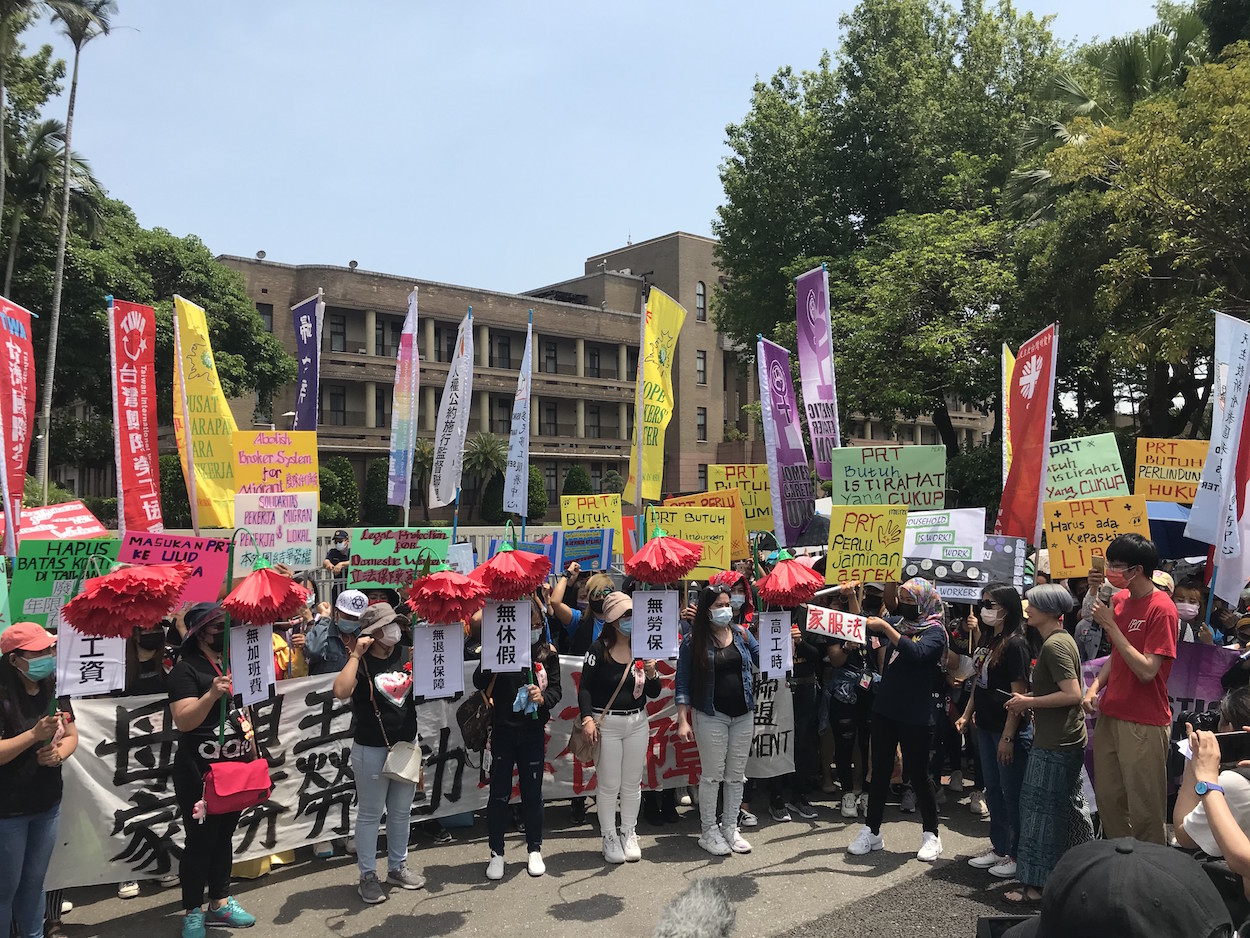 “Action theater” performed at the end of the rally. Photo credit: Brian Hioe

Consequently, migrant worker groups called for the ratification of the Household Services Act, something that they have been pushing for since 2004. In the absence of the government being willing to include migrant workers in the Labor Standards Act, which regulates labor conditions for Taiwanese workers, migrant worker groups call for the ratification of the Household Services Act. This would increase salaries for migrant workers in line with the salaries of their Taiwanese counterparts, assure them days off, provide them labor insurance that they are currently lacking, alleviate issues of overwork, and allow for retirement provisions.

To this end, at the end of the rally, migrant worker representatives performed “action theater”, in which they cut placards reading “overwork,” “no days off,” “no labor insurance,” “high working hours,” and “no retirement funds”, off of paper carnations using a set of pliers with the words “Household Services Act” attached to it. Carnations are traditionally given to mothers on Mother’s Day in Taiwan and the placards weighing down the paper carnations meant to represent how migrant worker mothers are weighed down by the poor labor conditions they face—but that the Household Services Act may be a way of alleviating these issues.

Yet it is to be seen if the Tsai administration takes action on the issue, Tsai having previously stated that the Household Services Act would undergo internal review, but this having failed to occur. Though civil society has put forward its own version of the bill, migrant worker groups were calling today on the Executive Yuan to draft and publicize a version of the bill, to allow for the bill to take further steps to advance through the legislative process.