THAT A RARE strike by crane operators in China coordinated across several provinces has been little reported on due to lack of information about the events readily available online. That this is so, likely points to successful repression of information about the strike on the Internet by the CCP, something made possible by that China’s vast distances sometimes make it difficult for news to travel by word of mouth, inherently requiring telecommunications systems for news to circulate.

Of course, knowing this, the CCP has taken to instituting automated censorship mechanisms on the Chinese Internet, which in some cases can be as sophisticated as the censoring of images in realtime sent by private messages, something which could only take place through automated algorithms. Nonetheless, some minor reports on the strike have been made by state-run media, likely in order to allay allegations that the CCP is attempting to prevent information about the strike from spreading.

On the other hand, the coordinated efforts of the strike probably also took place through the Internet. It is hard to imagine that a strike occurring throughout geographically dispersed provinces among workers in a specific industry would be able to occur otherwise.

Although demonstrations actions have taken place in some places, it is reported that these were rapidly suppressed by police. While the initial wave of the strike was coordinated to take place concurrent with International Workers’ Day—known as May Day in some parts of the world—rumors are that other strike actions are planned.

Workers likely hoped to add pressure to their companies and the government by timing their strike with International Workers’ Day, seeing as the Chinese government still ostensibly claims to be a communist party which watches out for the interests of workers. The official state-run union, the All-China Federation of Trade Unions more often proves a means of defending the interests of capitalists and the state, rather than workers.

Workers are demonstrating for higher pay, with crane workers paid sometimes as little as between 4,000 to 6,000 yuan per month while working ten hour days, and sometimes not paid for overtime. Workers thus call for pay raises to 9,000 yuan for crane operators, with pay raises of up to 5,500 yuan for signal operators, and 6,000 yuan for escalator operators, as well as standard 8 hours day. Workers also call attention to the fact that, as construction workers, they work in highly dangerous conditions without adequate safety measures.

In many cases, it would be the deep-seated ethos of developmentalism which contributes to unsafe working conditions and low pay for construction workers as crane operators. Urban building projects in China continue to take place at a rapid pace in China, in line with the economic transformations China went through in past decades in spite of a slowing economy, and even if entire “ghost cities” without residents are constructed in anticipation of future need.

However, it still remains to be seen as to how crane operators and other construction workers intend to make their voices heard by the government and by society. The Chinese government has demonstrated that it is decidedly not on the side of the working class and has no interest in politically enfranchising in, for example, actions such as evicting poor migrant workers in Beijing. Such evictions are carried out for the sake of future population caps that China intends to institute in Shanghai, Beijing, and other Tier 1 cities, so as to keep such cities reserved for China’s rising middle class population and other elites—never mind that this treats those who literally built such cities and keep them running as disposable. 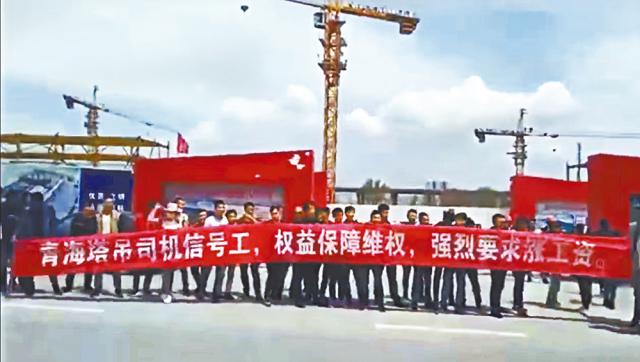 Despite the wide-ranging nature of the strike and evidence of widespread dissent in that a strike could be organized in a dozen provinces, it may be that more worker militancy, more widespread organization across sectors—and more radical demands on the part of workers—is needed. The Chinese government has already made it abundantly clear as to the class interest it sides with and even if workers are granted pay raises or lip service is paid to better safety measures, workers will at the end of the day still be treated as a disposable workforce for the sake of elites’ economic interests. This will not change, no matter what workers agitate, and so action is needed.