LABOR GROUPS demonstrated for International Workers’ Day in Taipei today. According to organizers, 3,000 were in attendance.

Demonstrators began to assemble on Ketagalan Boulevard outside of the Presidential Office Building at 12:30 PM. Speeches began at the color stage set up for the event at 1:30 PM. Around 1:45 PM, the groups set out for a march that proceeded from Ketagalan Boulevard to the Legislative Yuan, to the Control Yuan, and then to the Executive Yuan. At the Legislative Yuan, demonstrators held up signs that were green on one side, listing a demand for higher salaries, and red on the other, listing a demand for pension guarantees, and flipped the signs around when directed to. 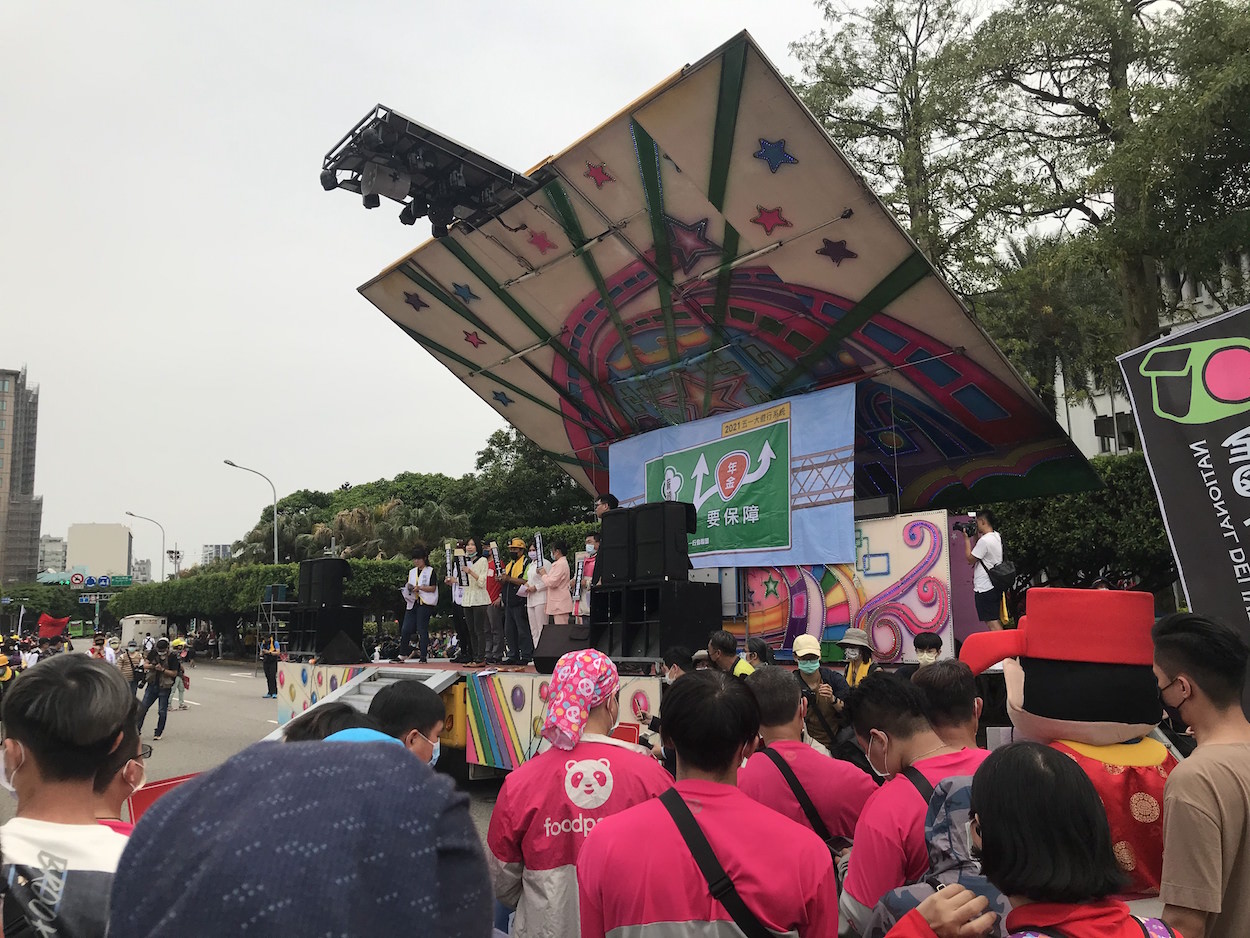 At the Executive Yuan, however, a brief scuffle broke out with police, police insisting that the organizers of the march only applied for their parade route to go to the Control Yuan, and organizers insisting that they only intended to go to the Executive Yuan to present a petition. The main rally eventually dispersed around 2:45 PM, but a contingent of teachers’ unions remained outside of the Executive Yuan, waded in by police, aiming to present a petition to representatives of the Executive Yuan. Before the main demonstration dispersed, workers held up cutouts of President Tsai Ing-wen, Vice-President William Lai, and Premier Su Tseng-chang as part of what was termed “action theater.” 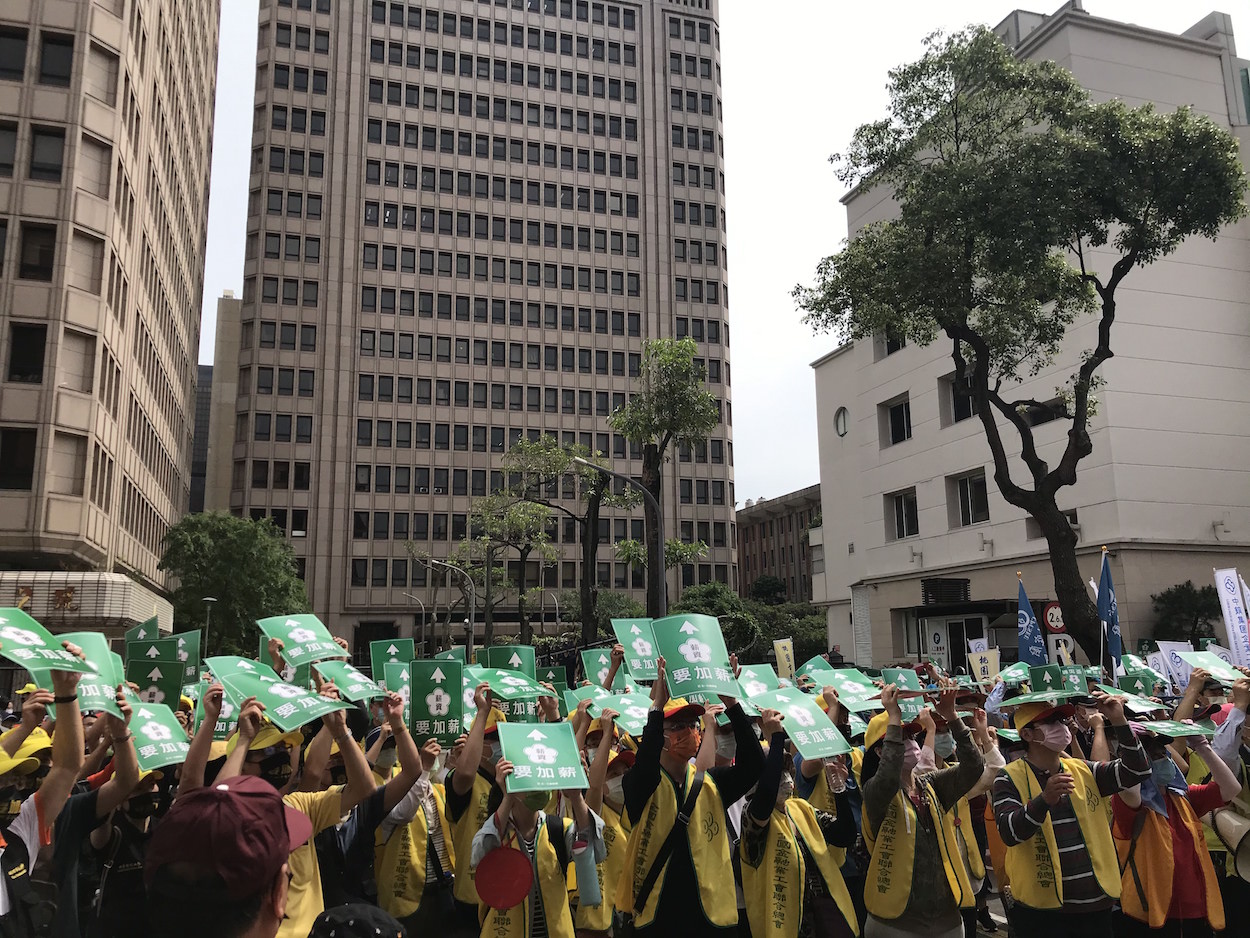 Last year, the demonstrations for International Workers’ Day were scaled down to take the form of a press conference in light of the COVID-19 pandemic. This year’s demonstration represents a return to holding a protest march, but the demonstration was still significantly smaller than usual, and the parade route was unusually short.

In this way, even with the COVID-19 situation largely under control, this year’s demonstration was still affected by COVID-19. After two and a half months in which there were no cases of the domestic transmission of COVID-19, Taiwan recently saw domestic transmission in Taoyuan; Taoyuan is where many of the most militant labor unions in past years, particularly during late 2017 and early 2019 protests against the Tsai administration’s changes to the Labor Standards Act, are located. That being said, many of the union groups traditionally seen at annual commemorations of International Workers’ Day were still present, such as the Chunghwa Telecom Workers’ Union, the Taiwan Petroleum Workers’ Union, and groups from northern, central, and southern Taiwan. 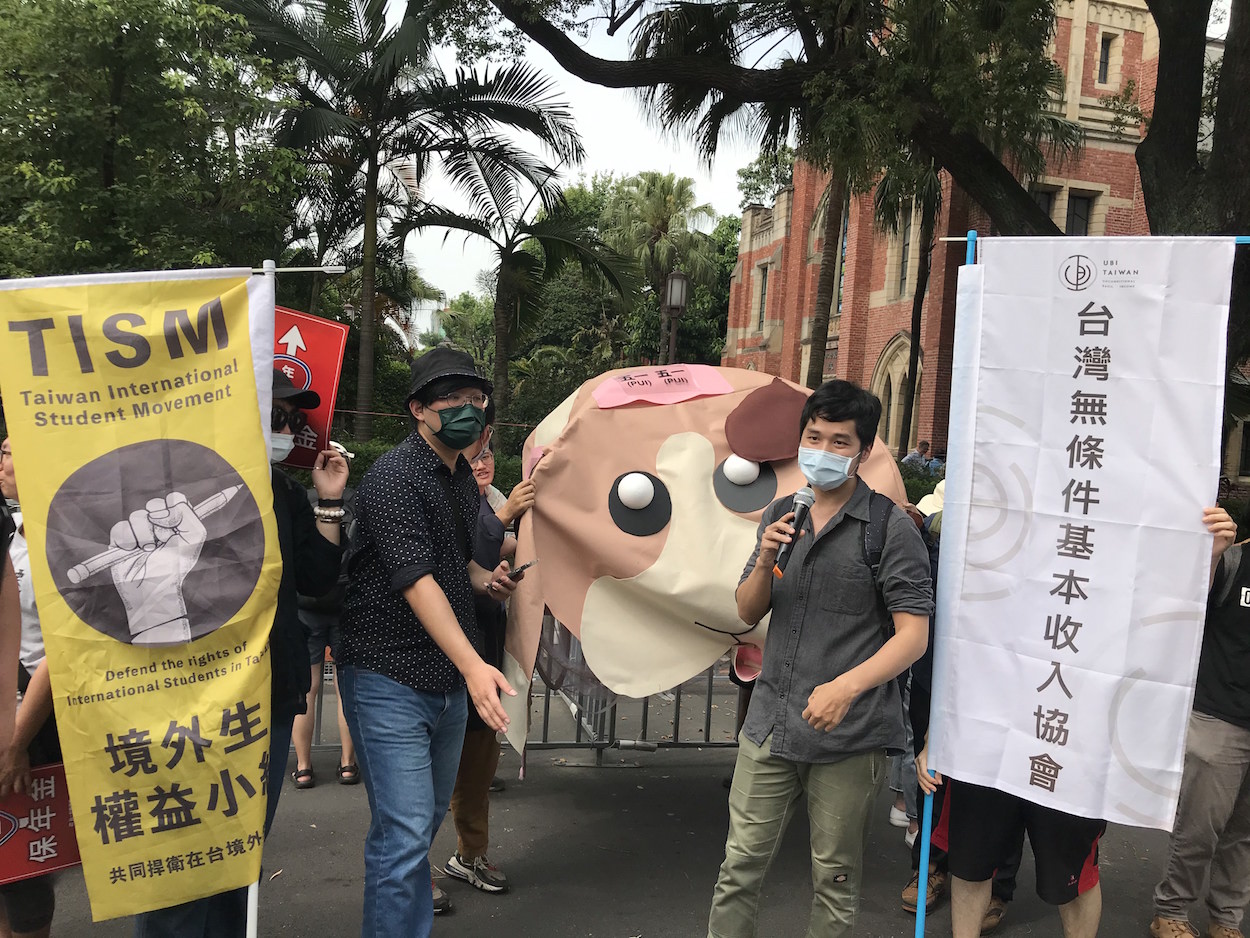 Groups such as UBI Taiwan and the Taiwan International Student Movement were also present, along with a float shaped like the protagonist of hit Japanese animation PUI PUI Guinea Pig Cars. The New Power Party, too, was present. While migrant workers usually hold a demonstration as part of International Workers’ Day, this year the demonstration was moved to take place tomorrow outside of the Executive Yuan, seeing as International Workers’ Day falls on a Saturday this year. Migrant workers usually only have Sundays off, if at all. 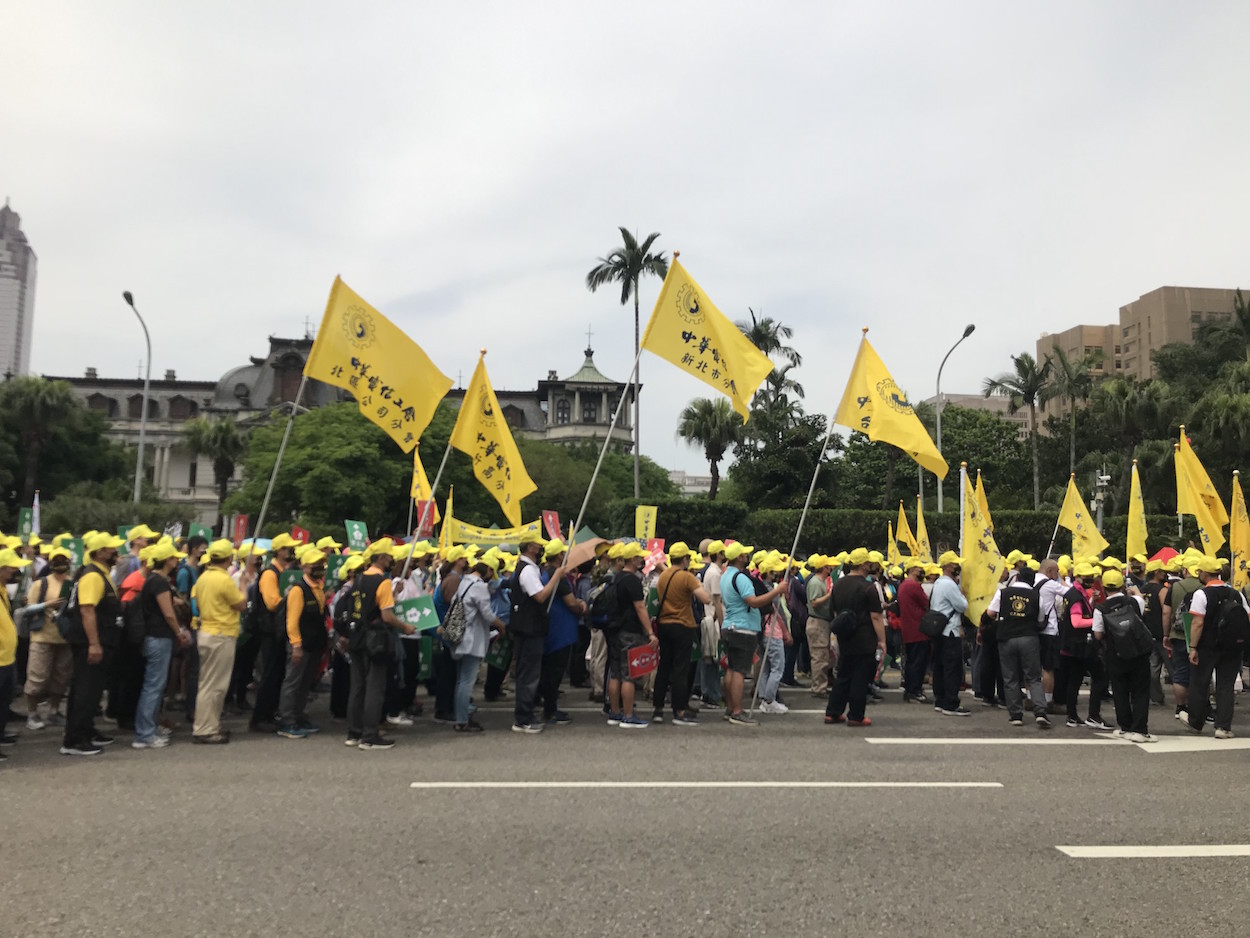 The demands of the protest today were similar to past years, in demanding increases in salaries and stronger assurances for pensions. Speakers at the demonstration pointed out that, seeing as Taiwan has never seen a lockdown during the duration of the COVID-19 pandemic. This led Taiwan’s economy to see economic expansion not seen since the 1990s, inclusive of Taiwan’s GDP growing more than China’s did for the first time in thirty years. Yet Taiwan’s economic growth has not trickled down to workers. As such, workers called for the basic monthly wage to be raised to 30,000 NT. 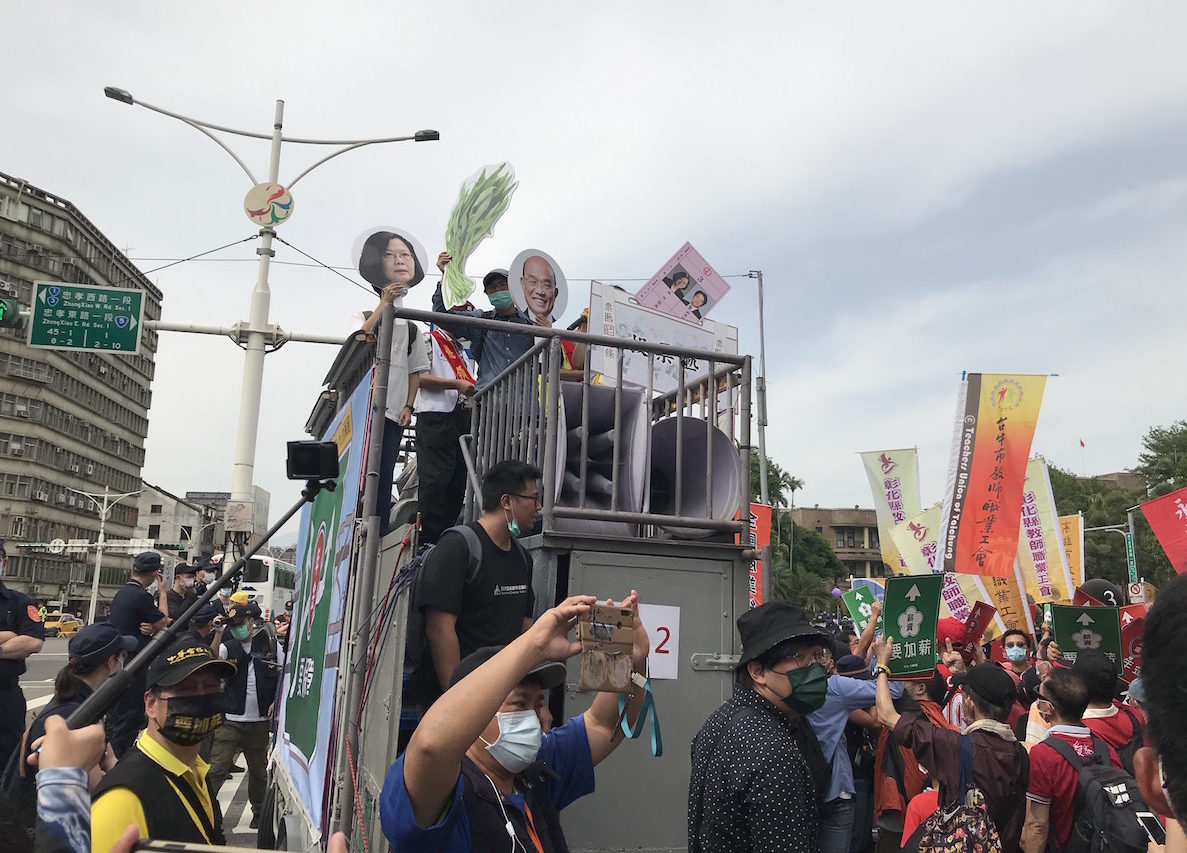 Otherwise, workers were critical of the effects of the Tsai administration’s pension reforms, which were aimed at preventing the pension system from going bankrupt. More controversial, may be comments by teachers’ unions framing the issue as one affecting members of the military, police, public servants, and teachers’—Taiwan’s pension system was at risk of going bankrupt because of the fact that these groups received highly generous pensions during the authoritarian period, as a reward from the KMT in return for political loyalty. As a result, Taiwan’s pension system has been criticized as a legacy of the authoritarian period. The perceived alignment of labor with some elements of the pan-Blue camp has been controversial in the past year, most notably in the wake of last year’s Autumn Struggle demonstration, which had significant KMT presence—Autumn Struggle being the other major annual labor protest in Taiwan outside of International Workers’ Day. 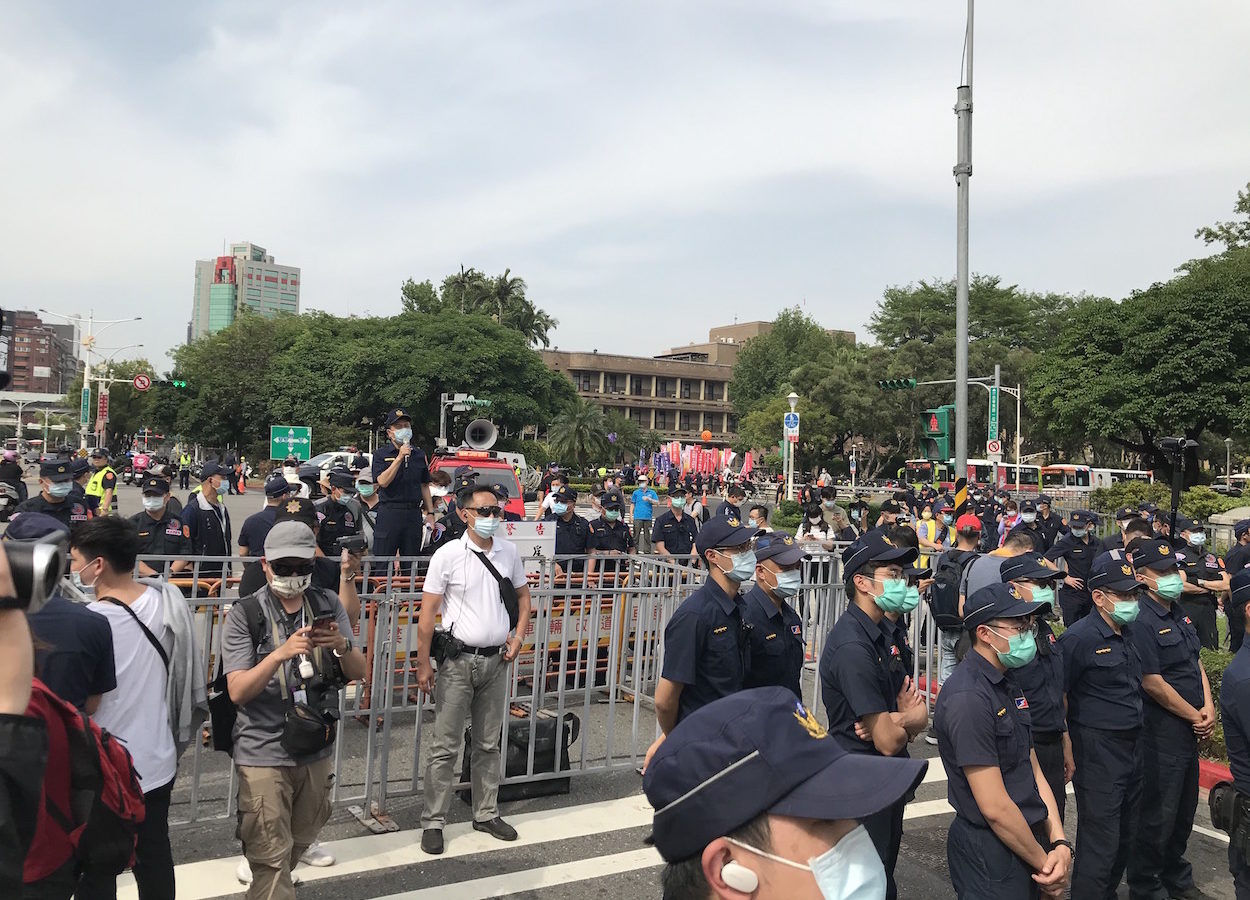 The labor demonstration this year placed particular emphasis on vulnerable occupation groups, including frontline medical workers involved in the fight against COVID-19, teachers, artists, and delivery workers. With delivery workers having seen a recent drive to establish a national union, Foodpanda and Uber Eats delivery workers were present in force, wearing their uniforms and riding scooters. Demonstrators were critical of the undue burden placed on groups such as medical workers during the COVID-19 pandemic—with a lack of supportive measures from the government for such groups—as well as how capitalists had used the COVID-19 pandemic as a pretext to block wage increases. But it remains to be seen if labor groups will be successful in getting the government to listen to their demands, despite frequent rhetoric by politicians about attempting to improve wages and living conditions in Taiwan.