THE ANNUAL MARCH in Taipei commemorating International Workers’ Day did not take place today, given the ongoing COVID-19 pandemic. Although Taiwan has managed to avoid the worst of the COVID-19 pandemic to date, avoiding the expansive lockdowns seen in other parts of the world, social distancing measures still remain in place to prevent the spread of the coronavirus. Consequently, social movement activity is relatively low at present, with few protests occurring at present.

Instead, labor groups held a press conference this morning on Ketagalan Boulevard in front of the Presidential Office Building, where the International Workers’ Day march normally starts each year. Representatives of over 100 labor groups were present. This was the first time in twelve years that the annual International Workers’ Day march did not take place. 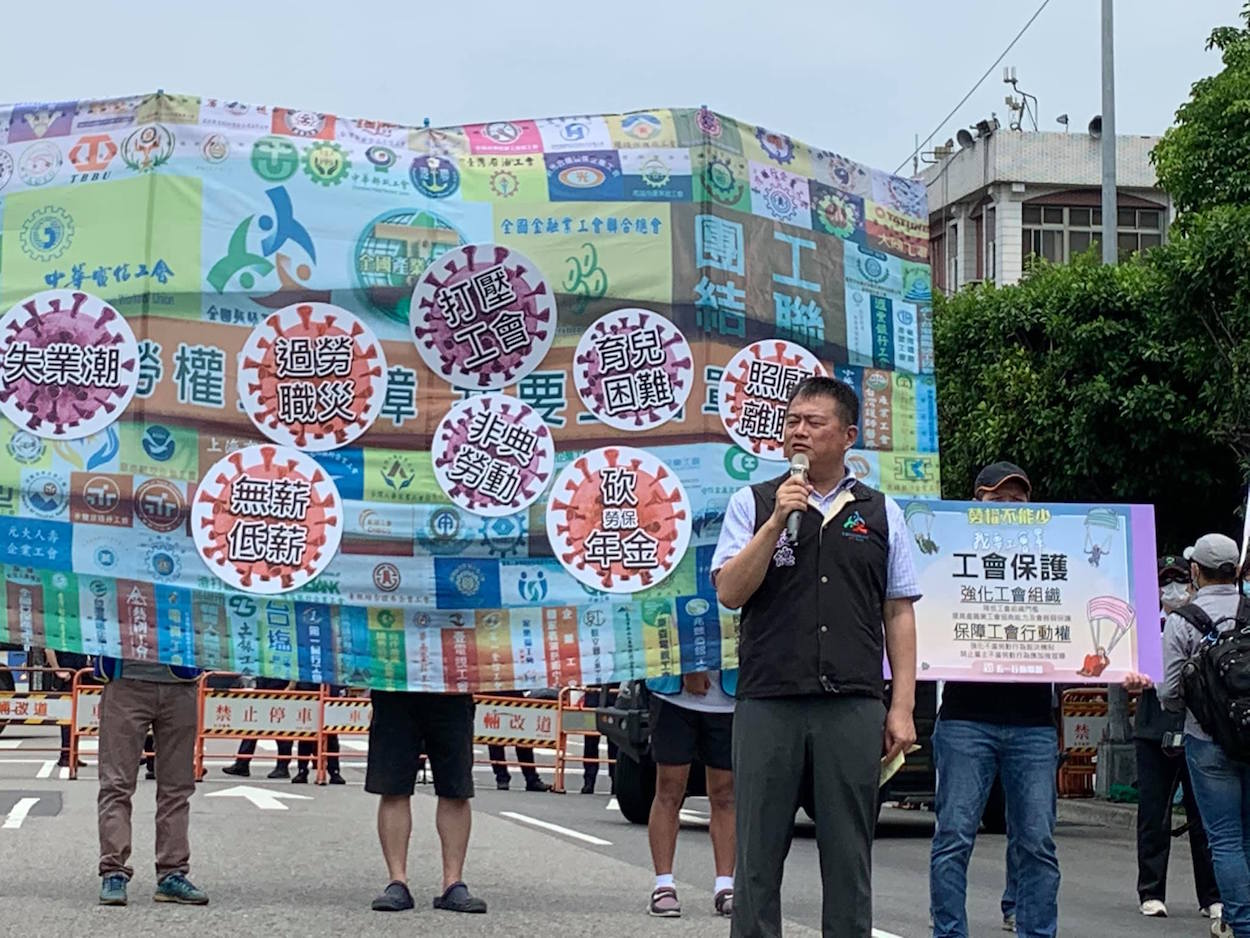 The demands of organized labor groups, written in banners resembling the COVID-19 coronavirus, and in front of a “face mask” constructed from union banners. Photo credit: 全教總/Facebook

It may not be surprising to note, then, that part of the press conference was coronavirus-themed. Signs held up by labor representatives listing the demands of workers were shaped like the coronavirus itself. Labor representatives also carried a banner composed of the flags of the different organized labor groups that usually participate in the International Workers’ Day march, which they claimed to be a “giant face mask”, such as those used to prevent the spread of COVID-19.

In particular, workers demanded an end to low salaries, cuts to pensions, and an end unpaid or low paid overtime. Workers also demanded aid for childcare, unemployment benefits, and further government measures to stem the rising tide of unemployment, something which has been worsened by the COVID-19 pandemic.

Furthermore, union groups called attention to union-busting within companies. Union groups stated that the current requirement that thirty employees are needed to form a union prevents unions from being formed in small-to-medium-sized enterprises, which play an important part in Taiwan’s economy.

President Tsai Ing-wen also released a statement expressing its respect to workers earlier today, emphasizing that the Tsai administration would continue to provide subsidies to industries heavily affected by the COVID-19 pandemic. Organized labor groups are likely to find such claims by the Tsai administration to be facile, however, similar to claims by Tsai that workers “had a soft spot in her heart” at the same time it passed unpopular changes to the Labor Standards Act in winter 2017 that undid close to thirty years of labor reforms in Taiwan.

It proves a question as to what steps organized labor can take to pressure the Tsai administration. The Tsai administration is not likely to use legal measures used to fight against COVID-19 as a pretext to crack down on political gatherings, as has taken place in Hong Kong as of late. But the COVID-19 pandemic makes it difficult to hold political gatherings nonetheless.

Similarly, organized labor in Taiwan has seen a low ebb since its failure to block the Tsai administration from passing changes to the Labor Standards Act in 2017, with many social movement activists aligning with the DPP after 2018 nine-in-one elections resulted in a rout for the pan-Green camp. The results of 2018 nine-in-one elections led to fears that the KMT would again be resurgent, causing individuals who had been involved in demonstrations against the Labor Standards Act to join or align with the DPP. Consequently, last year’s “Autumn Struggle” (秋鬥) demonstration—Autumn Struggle being another one of the significant yearly annual labor protests in Taiwan apart from International Workers’ Day—did not actually take place, with reports that this was the result of internal splits before the presidential election.

At the same time, the ongoing COVID-19 pandemic has created a host of new labor issues. Apart from demands for subsidies by medical workers mobilized on the frontlines of fighting COVID-19 but whose income has taken a hit during the crisis, workers in some industries have been left out of COVID-19 safety measures. This is particularly true of migrant workers, who often lack workplace protections that their Taiwanese counterparts more easily have access to. As such, while the COVID-19 pandemic can very easily seem like a time for Taiwanese labor to regroup in a period of low social movement activity, the COVID-19 pandemic itself raises a number of issues for organized labor in Taiwan.