Aesthetics and Politics in 2020 Elections

AS WITH THE past several elections since the 2014 Sunflower Movement, young candidates continued to be the source of much creativity during 2020 election campaigning. A number of the candidates that were particularly innovative in their campaign aesthetics were members of the “Democracy Frontline,” an interparty alliance of youth candidates from the DPP, Taiwan Statebuilding Party (TSP), or independents.

CANDIDATES THAT dress in costume more broadly follow in the legacy of heavy metal frontman turned legislator Freddy Lim, formerly of the NPP, who is running for reelection this year as an independent. It is not surprising then, that Lim is the leading figure of the Democracy Frontline. As in past years, the concert held by Lim’s band, Chthonic on Ketagalan Boulevard before the election proved a significant campaign event for young candidates. This year, the concert took place on December 21st and served as a de facto campaign rally for the Democracy Frontline. 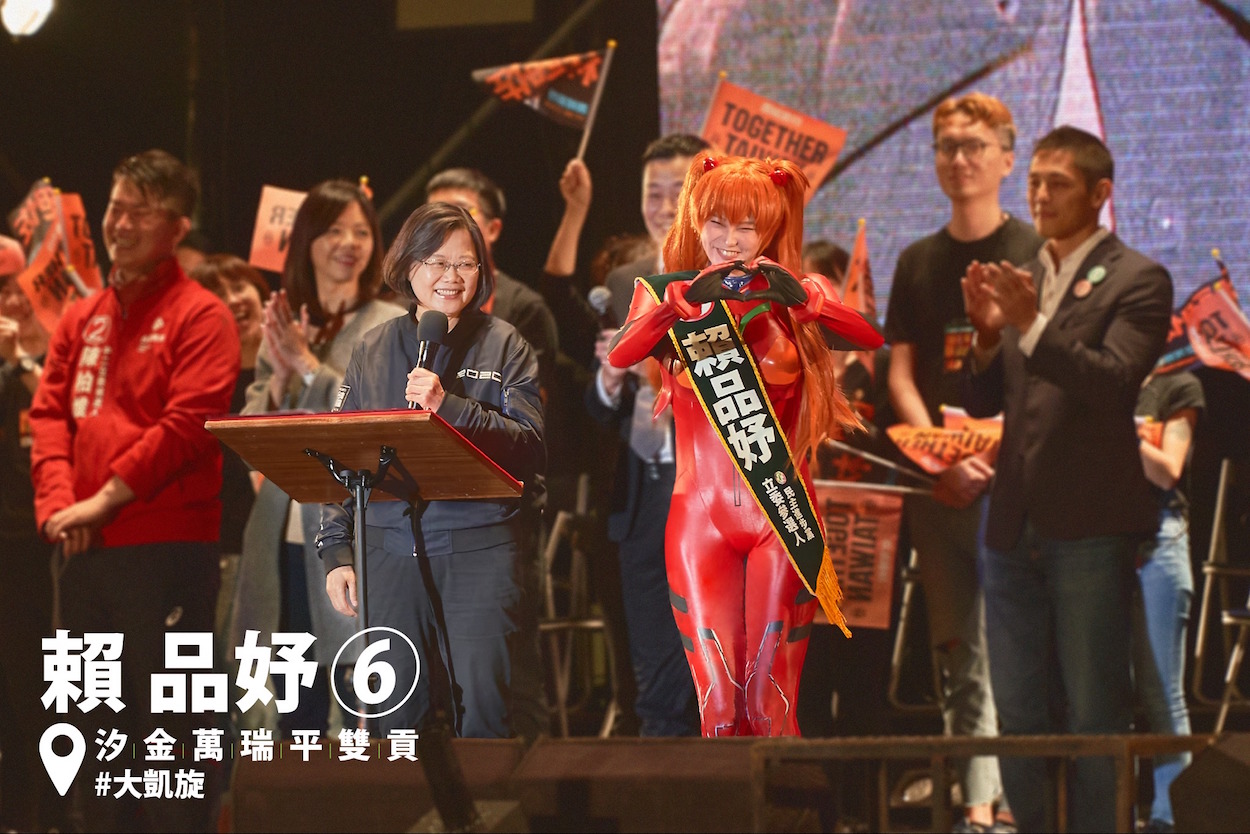 Lai Pin-yu, a former Sunflower Movement activist that later came to work as Lim’s legislative assistant before deciding to run for office herself as part of the DPP, originally became well-known for participating in social movement protests while dressed in cosplay in the years prior to the Sunflower Movement. This continued after Lai begun her run as a DPP legislative candidate in New Taipei District 12, sometimes wearing cat ears or gloves while canvassing.

Lai appeared in cosplay as Sailor Mars from Japanese anime Sailor Moon on a poster advertising the Chthonic concert this year. At the concert itself, Lai dressed as Asuka Langley Soryu from the Japanese anime Neon Genesis Evangelion. The iconic font styling used from Evangelion was also used in campaign posters from Lai. 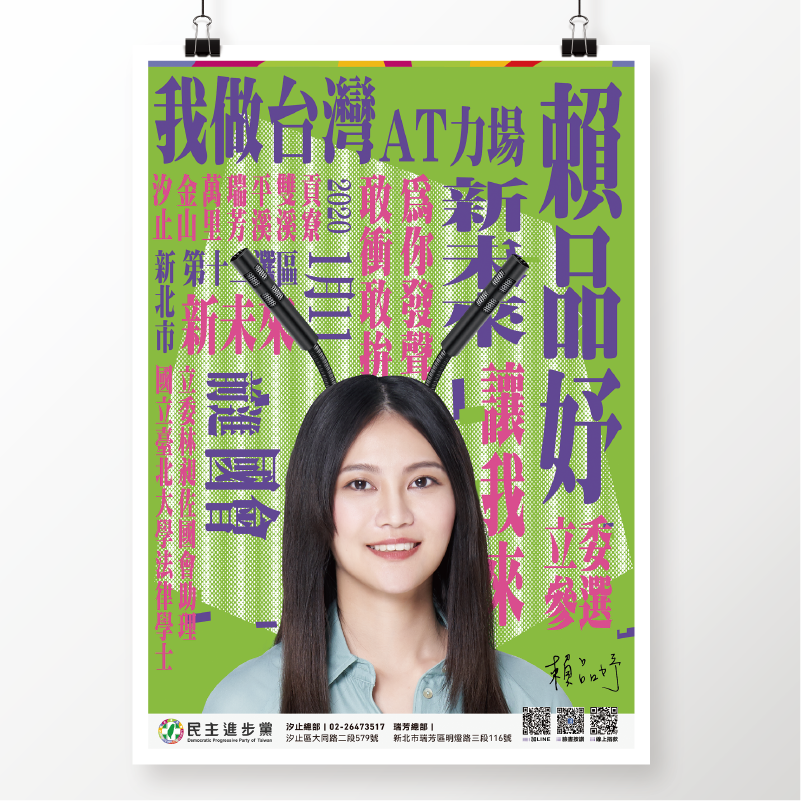 In running in Matsu, one of Taiwan’s outlying islands, Lii stood out from other DPP candidates because of the ROC and military imagery used in his campaign, with the ROC flag paired with a green Matsu island logo designed to resemble the DPP’s green Taiwanese mainland logo. Many members of the DPP view the ROC flag as a symbol of past authoritarianism because the white sun on the flag is the KMT’s party symbol, representative of the KMT’s authoritarian party-state. However, Matsu is seen as strong not only in ROC nationalism, but ROC militarism. It is such that Lii adapted symbols normally not used by DPP candidates into his campaign.

Because the DPP was not expected to win in Matsu, given the strong slant of the island toward the pan-Blue camp, Lii was likely running a campaign without any real expectation of winning. As such, Lii’s campaign was oftentimes very humorous. Lii took to wearing a balloon strapped to his back featuring his name, even running a full marathon while wearing this balloon at one point during his campaign. 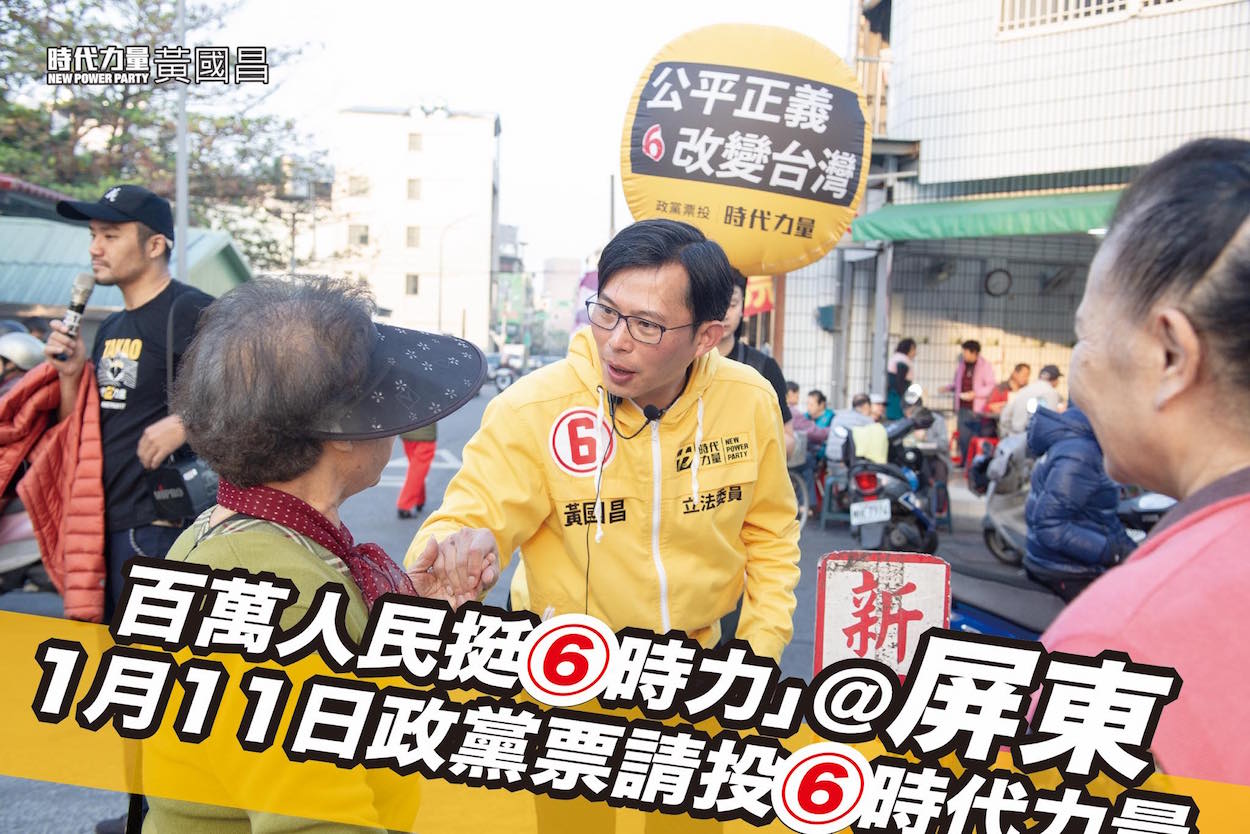 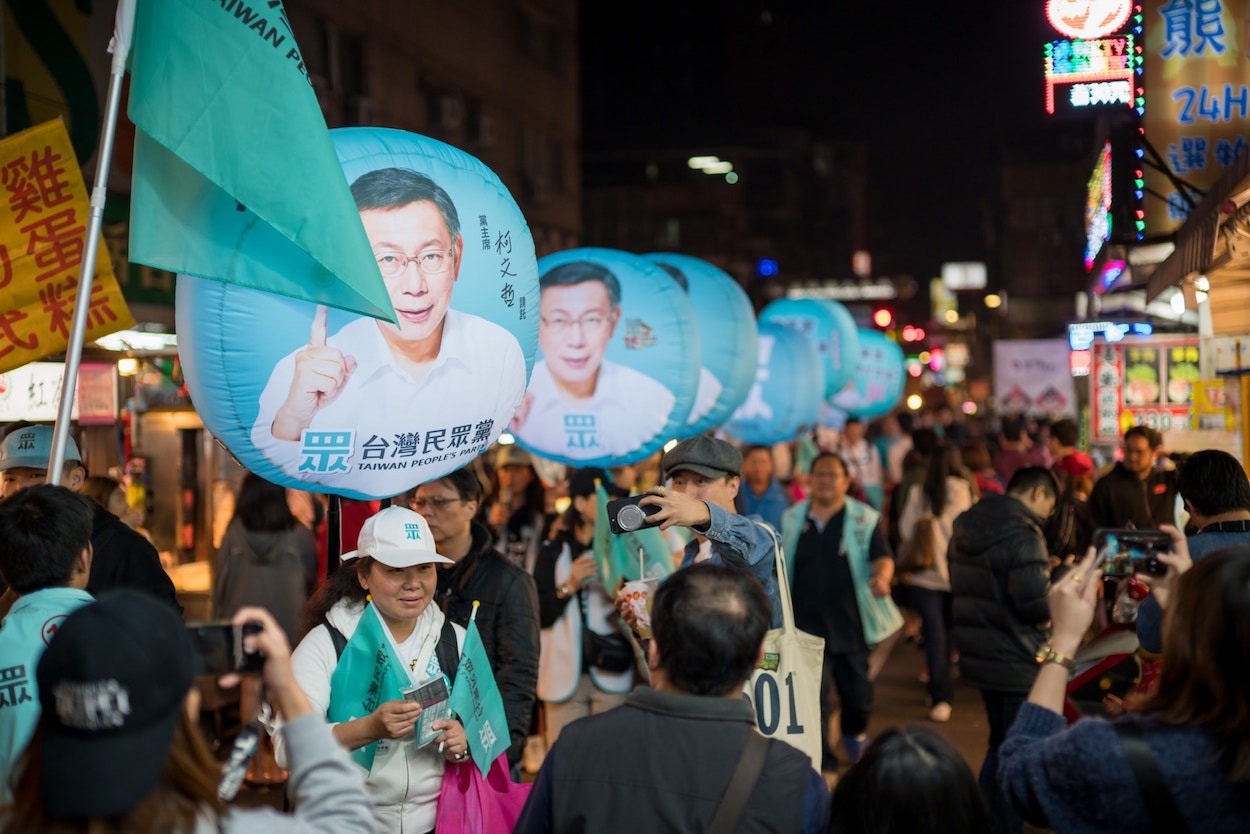 For his part, with other candidates adopting his campaign balloon, Lii began wearing a mussel shell resembling a set of wings as a way to highlight a significant agricultural product of Matsu’s, and later began to wear a set of gloves during canvassing resembling a set of lobster claws in order to advertise another one of Matsu’s significant agricultural goods.

ONE NOTES THAT many young candidates relied on viral videos to advertise. Lai became well-known to the public after a video went viral of her knocking the cover off of a microphone with her hair during the press conference where she announced the start of her campaign. Lii, similarly, released a music video featuring him and a fake band as campaign advertising.

Music video released by Lii Wen, in which Lii can be seen wearing his trademark mussel wings. Film credit: 李問/Facebook

More generally speaking, one observes the trend of YouTubers and social media influencers playing an increasingly significant role in Taiwanese politics. The most striking example of this is likely Froggy Chiu, who successfully became a city councilor in Taipei last year by running a campaign that utilized zero traditional advertising, using only online videos and advertisements. Though he did not run in this set of elections, Chiu formed a political party comprised entirely of YouTubers, the Unstoppable Joy Party this year, in order to film and make videos about legal procedures to form a political party. Chiu saw this as a way to make the sometimes opaque legal process of election campaigns more transparent to average citizens.

One notes that politicians both pan-Green and pan-Blue sought to make appearances on the programs of YouTubers and other Internet celebrities in order to advertise, as observed in Tsai Ing-wen and Han Kuo-yu alike appearing on fitness celebrity Holger Chen’s streaming program, appearing on comedian Brian Tseng’s Night Night Show, or Tsai making videos with prominent YouTubers such as Tsai A-ga and Potter King.

It was also frequently rumored that third parties were actively seeking YouTubers and streaming personalities to run as candidates, as observed in longstanding rumors that Huang Kuo-chang of the NPP hoped to form a new political party with Holger Chen or that Freddy Lim was seeking to recruit comedian HowHow as an NPP candidate. Some candidates, such as Chen Bo-wei of the TSP, did in fact originally become well-known to the public through YouTube videos. In Chen’s case, these were YouTube videos criticizing and making fun of Kaohsiung mayor and KMT presidential candidate Han Kuo-yu.

The Tsai campaign, however, also produced much more simplistic ads visually resembling the so-called “senior images” often circulated among old people on Line, a key social media network in Taiwan. Ths Tsai administration did not previously attempt to produce ads in this style, but likely felt the need to outreach toward older voters, a lacking design element in the aesthetics of previous campaigns.

INDEED, ONE NOTES that the overall aesthetic of the Tsai campaign remained modernist in orientation, as in 2016, but used an older-looking font, resembling fonts commonly used in the late 1990s and early 2000s. It is very probable that the Tsai administration had come to the realization that the sleek, high modernist design aesthetic it had used in 2016 could be alienating of older voters and was attempting to strike a balance between a newer and more traditional aesthetic. 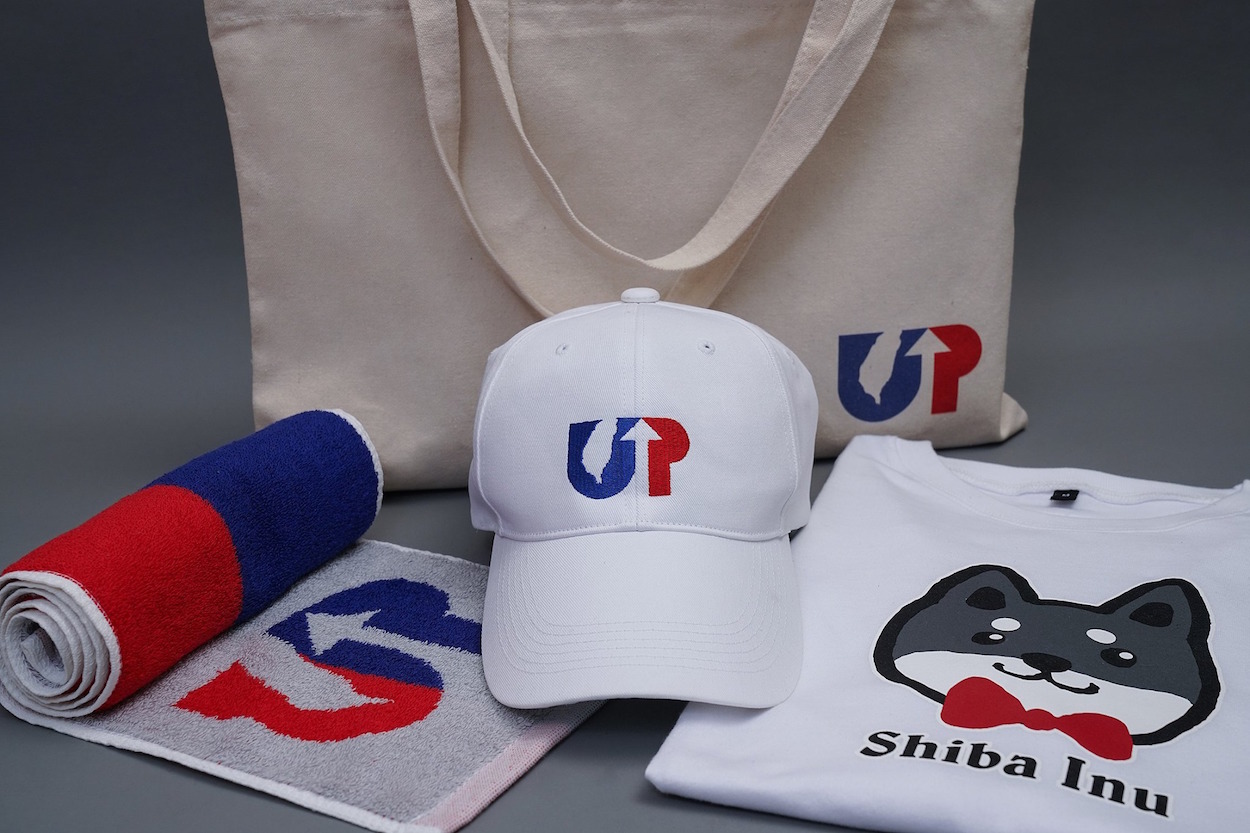 There was a less clear campaign aesthetic from the Han campaign. Yet the logo design of the Han campaign’s “Up Taiwan” slogan, too, resembled design aesthetics more commonly seen in the late 1990s and early 2000s. One generally saw convergences between both the DPP and KMT in terms of the American college-style campaign jackets that both parties sold, use of cartoon depictions of their respective candidates, and attempts to associate candidates with their pets. In the case of Tsai, this was associating Tsai with her pet cats and dog, while in the case of Han Kuo-yu, this was through associating Han with his pet Shiba Inu—though the Han began to play up the association of Han with his pet Shiba Inu late in the race and was likely imitating the Tsai campaign. 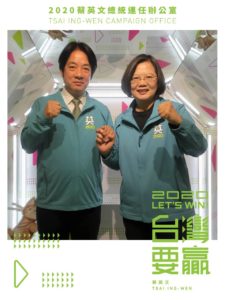 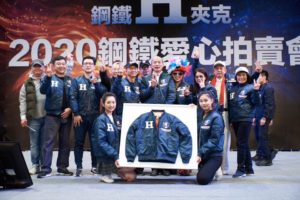 By contrast, perhaps gesturing toward their more youth-oriented political orientation, Third Force parties as the NPP and TSP have also seen a convergence in terms of campaign stylings, as observed in that the red campaign jackets adopted by TSP members this year strongly resemble the campaign jackets which members of the NPP began to wear in 2016. 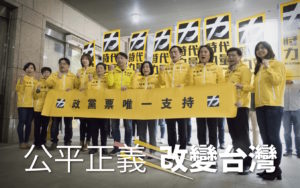 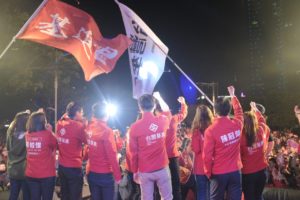 While campaign jackets for both camps proved popular items, it is probably true, however, that in terms of campaign merchandising, the Tsai administration was more successful. A Taiwan-shaped pillow sold by the Tsai campaign was highly popular, as did rice flour and hot sauce punning on Tsai’s somewhat bizarre “Hot Taiwanese Girl Tsai Ing-wen” nickname, and the Tsai administration set up a store in the building where DPP headquarters is located in order to sell campaign goods.

An Instagram-savvy campaign stratagem also proved to park several of Tsai’s dogs in this campaign store, for visitors to come and take selfies with. By contrast, the KMT set up no similar store. 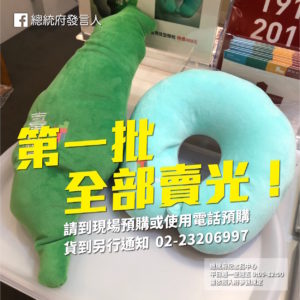 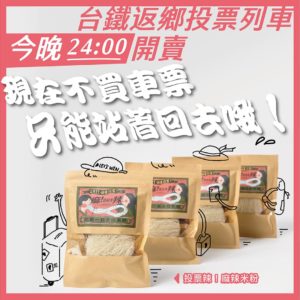 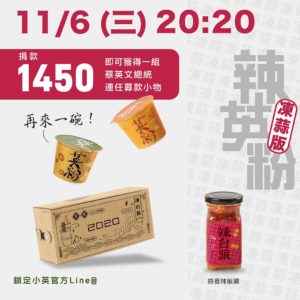 Aesthetics and politics continue to be deeply linked in Taiwanese election campaigning, then, with aesthetics sometimes revealing the underlying political substratum of Taiwanese party politics. It is still to be seen whether good design translates into good politics, or even election victory, however.