The Unstoppable Joy Party: An Interview with Froggy Chiu

New Bloom interviewed Chiu Wei-jie (邱威傑), popularly known as Froggy Chiu (呱吉), city councilor for Taipei District 3, on December 6th. Chiu is a YouTuber that was elected into office last year, running an unorthodox campaign dependent entirely on online advertising, and with no traditional means of advertising. New Bloom spoke to him about his recently formed political party of YouTubers, the Unstoppable Joy Party (歡樂無法黨). The video version of the interview can also be seen here.

Brian Hioe: First, could you introduce yourself for our readers?

Froggy Chiu:  I’m Taipei City Councilor Chiu Wei-jie. Some people also know me as Froggy. Because I have two identities.

One is as a Taipei City Councilor. I was elected into office in November 2018.

My other identity is that I have a YouTube channel. I’m a key opinion leader, or a so-called influencer. If you know me from that, you might know me as Froggy Chiu. 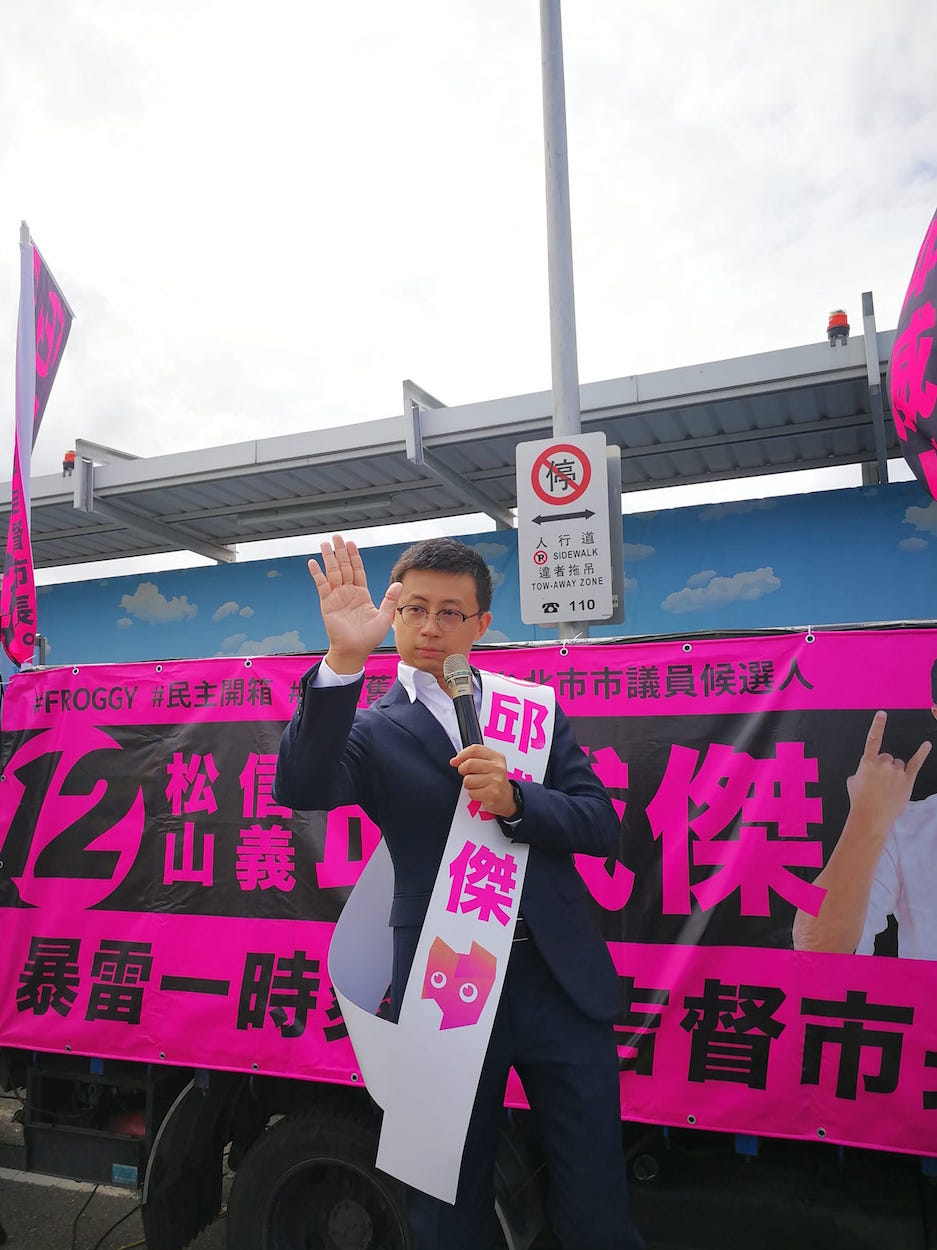 BH:  What led you to form the Unstoppable Joy Party, though you’re not actually running any candidates this year?

Although in Taiwan, we might have implemented democracy for some time, many people might not understand so-called party politics. For example, that we have three votes in the upcoming set of elections — for voting for the president, for voting for legislative representatives, and for party votes — not everyone may know what these three votes are for, particularly regarding the party vote.

I was thinking one day that I should maybe make some videos to explain this, to allow everyone to understand what these votes are for. At the time, I was meeting up with a friend, Sha Sha 77, who is another YouTuber. He was thinking something similar at the time.

So we decided to make some short films. We thought it would be us explaining things at first, but we thought, why not actually film us going through the political process itself, to let everyone see it firsthand?

For example, regarding the party convention to form a political party, this is necessary as part of the legal process to form a party. You have to go through this boring process, and it’s not normally anything that people would want to watch. 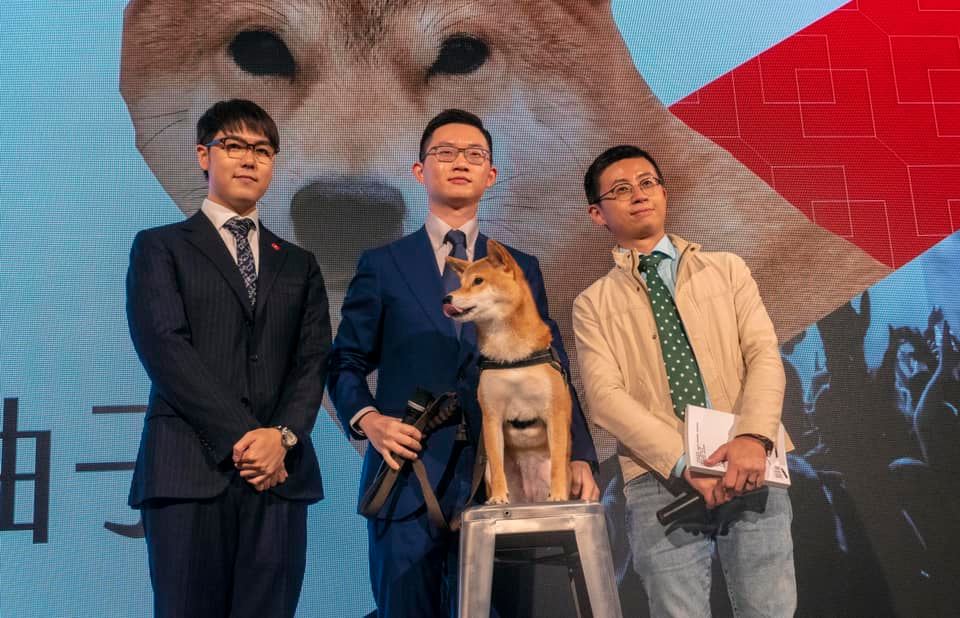 In March or April of this year, Ko Wen-je formed a party called the Taiwan People’s Party. Their party convention was not open to the public, so people would have no way to see what it was like or what they actually did there.

But our party convention, we live-streamed it to let everyone see what it’s like. There were probably around 9,000 views. This is probably something pretty unusual. We believe that this is a good civic lesson, something for everyone to see.

There’s another reason, which is that in Taiwan, whenever we bring up politics, many people feel hatred and other negative emotions. I’m not saying that politics is ridiculous or that it’s a bad thing. On the contrary, I believe that politics is a very necessary thing that we have to take seriously.

But for the majority of people in Taiwan, they’re not Gandhi. Gandhi went on a 23-day hunger strike. Most people couldn’t do this.

If you pursue an undertaking in the long-term, like you being a journalist or a media worker, it must not because it’s painful for you. There has to be something which makes you happy about it, or makes you feel accomplished, for you to continue doing this.

I hope that at the very least, for the Unstoppable Joy Party, we can allow everyone to realize that participating in politics or doing something for society isn’t such a painful process. 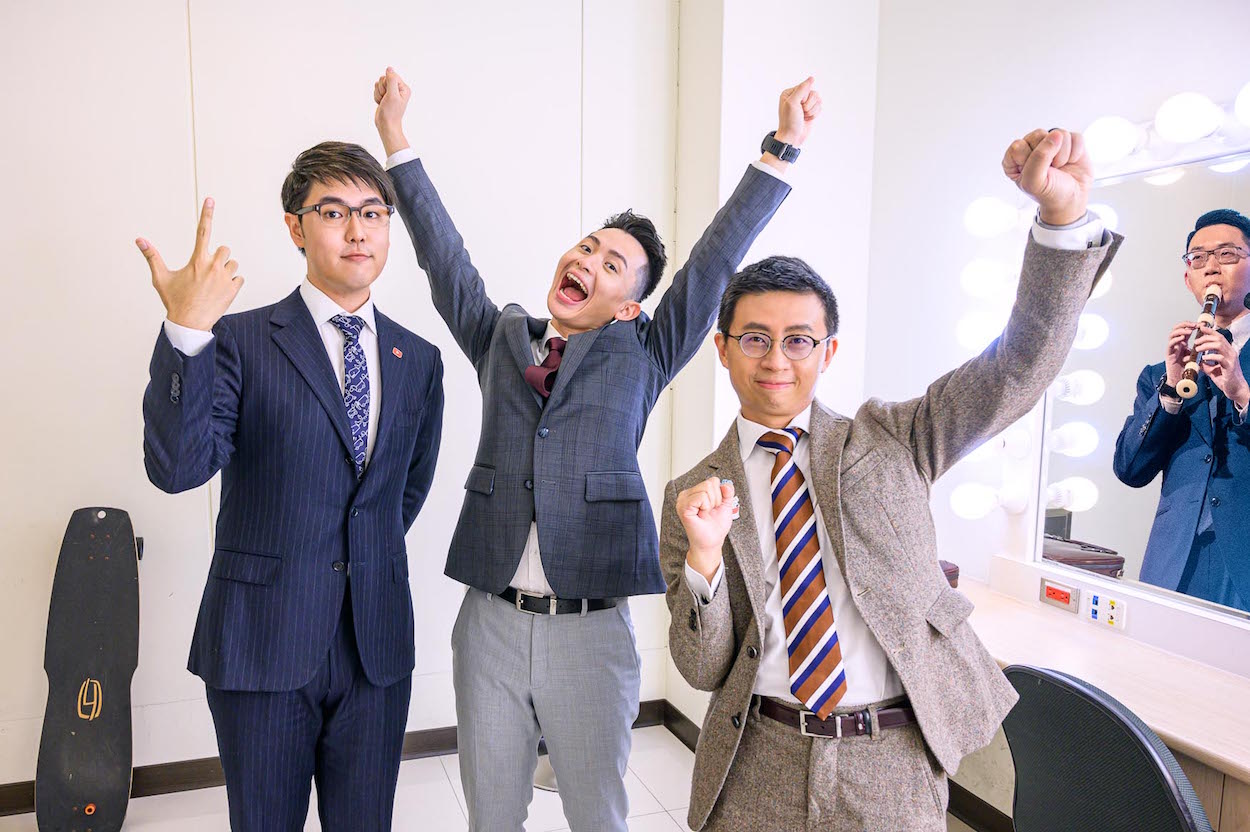 BH: What do you think is particularly important about this set of elections?

After all, Taiwan is quite a pivotal place. I’ve described it like this before: There were around thirty years between the First and Second World Wars. From the end of World War II in 1945 up until today, there have been about seventy years.

If there were a Third World War in the next decade, where is it likely to take place? Taiwan must be in the top three places where this war could break out. If you look at it this way, each election in Taiwan is very important. Because each vote can lead to different changes.

So I believe that this election isn’t different from others, in this sense. It’s a democratic choice. The decision you make today is a decision for the future, and it’s a responsibility.

However, many people definitely do feel as though, “Wow, this time, this will have a larger effect on the future.” We might feel that issues regarding independence and unification are very close. Everyone may have felt that these were distant issues in the past, but now we tend to feel that they’re closer, and that we all have to do something. 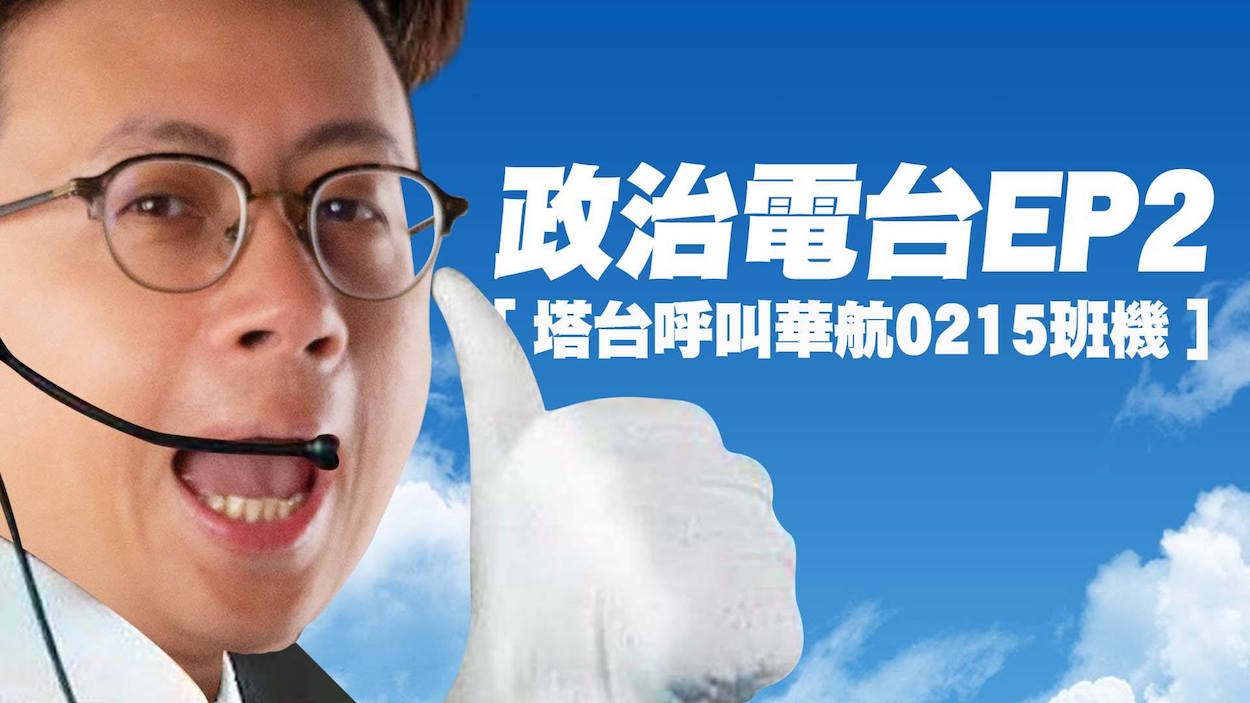 BH:  What issues do you think are particularly important during this set of elections?

FC:  I think what everyone may feel the influence of most strongly is the Anti-ELAB Movement. Because Hong Kong issues are very close to us at the moment. To some extent, we may share culture, blood, and we have many exchanges. So with such a large event taking place in Hong Kong, you feel like you want to reach out and help them.

I think this is reflected with respect to voting. Many people feel that their vote could potentially lead to Taiwan becoming like Hong Kong.

BH: The DPP is running a number of younger candidates this time and working together with parties as the Taiwan Statebuilding Party. Do you feel like this reflects trends regarding young people entering politics in Taiwan?

FC:  I don’t feel that this is true of every political party, that they are running young candidates. Actually, substantively speaking, I feel that some of the candidates this time aren’t as good. You can see that with the party lists regarding the average age. With the major political parties, it tends to be higher.

There’s nothing wrong with this, this is a choice in values. And I believe that labor and the environment are important issues. But I feel that our political behavior has become more traditional this time, and it’s less focused on the issues that young people care about. 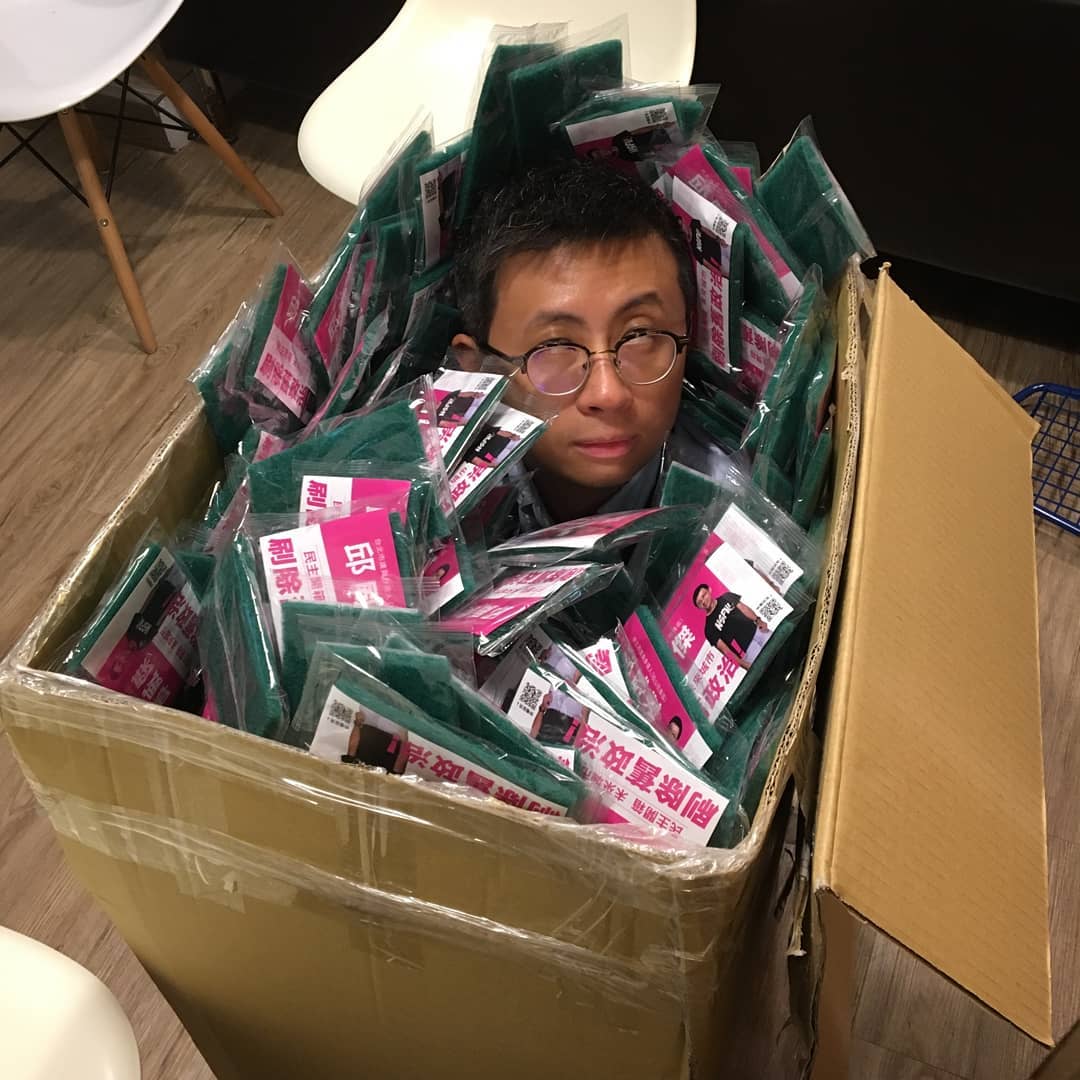 BH:  Do you believe that this reflects broader trends internationally regarding young people entering politics?

For example, if you’re a singer-songwriter, to get your first album out there, in the past you would have to find a record label willing to take you on, sign with them, and they would help you get your album onto the market, to sell your CDs. And only then could you become a successful musician recognized by others.

But I feel that at present, it’s not like that. There are many musicians who made their debuts without signing to any record label. They can make their own songs, post them online, and become recognized in this way.

There’s a reality TV show in America, Rhythm and Flow. One of the judges on that show, Cardi B, a hip hop musician, originally became well known through the Internet. Or in Taiwan, an example is 9m88. 9m88 has achieved a certain level of recognition, but she isn’t signed to any company. She runs everything herself.

There are more and more people like this. This is also true of politics. In the past, if you were running for office, let’s say for Taipei City Councilor, you’d have to have a certain amount of money. You’d usually have to spend 10 million NTD.

It’s not uncommon for people to spend up to 20 million. If you’re a young person, let’s say who is thirty, with a job that’s not too good nor too bad, you might have 1 million NTD in savings. I think this is possible. But to spend 10 million NTD is not something that an ordinary young person could do at all unless you have some way to get money—such as if your family is very wealthy, or you can think of ways to get donations, if you come from a family with a political background.

But with the Internet, you can cut expenses. When I ran for office last year, I set a condition for myself, which I announced publicly and resolved on with my team, that I wouldn’t spend more than 1.2 million NTD on my campaign. Because 1.2 million NTD is still an amount that is possible for a young person to spend as their upper limit. I wanted to let young people know that: If you control your expenses, you can still come up with ways to run.

Truthfully speaking, I had to break my promise to an extent. Because I didn’t calculate some necessary expenses correctly, I ended up spending 1.44 million NTD. 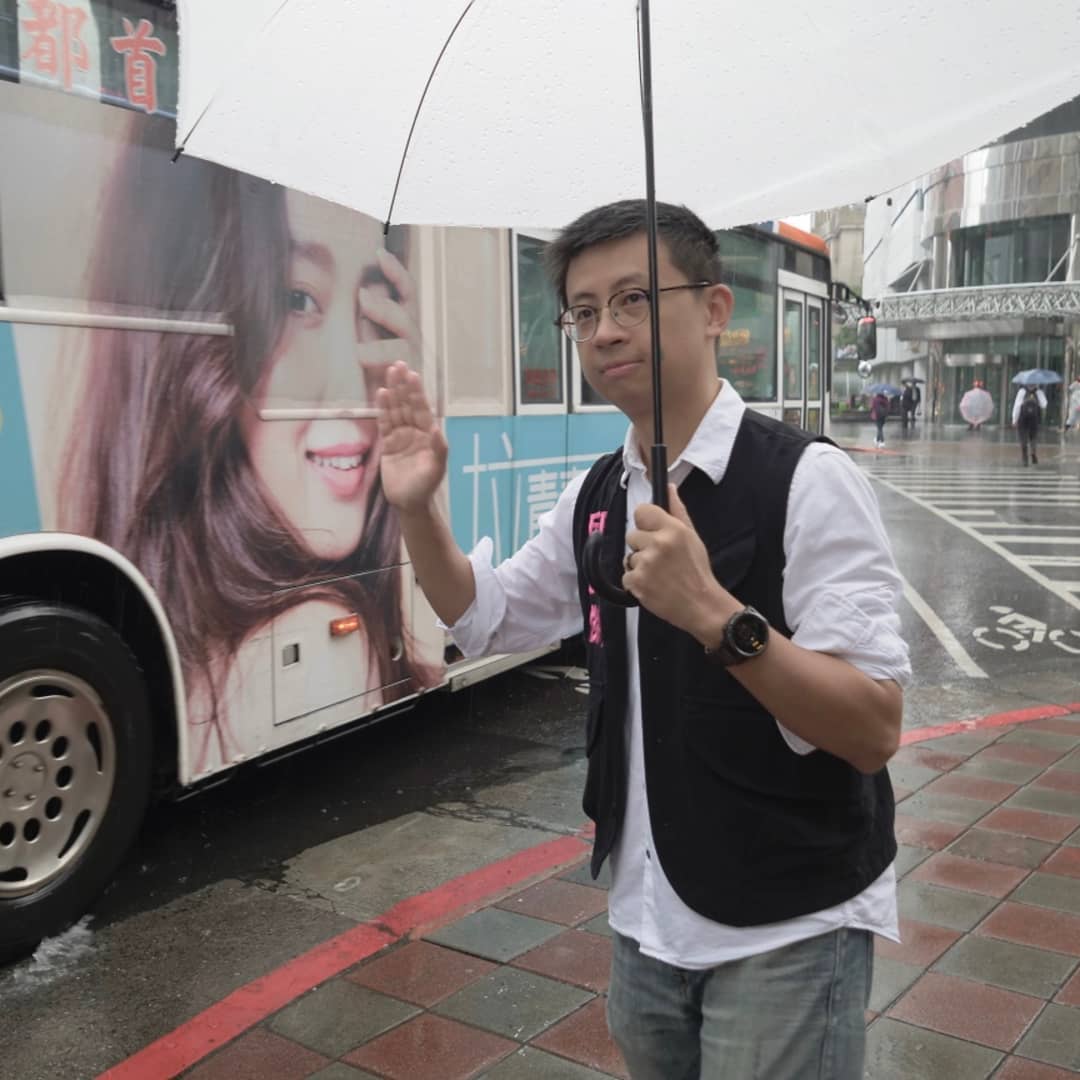 BH:  I remember that you didn’t have any election billboards, nor use traditional means of political advertising.

BH:  Lastly, what would you like to say to not only Taiwanese readers, but also international ones?

There are less than 40 days left before elections. Whatever you do, please remember to vote on January 11th next year. And particularly young people, if you don’t want your future to be decided by people who are twice your age, please remember to stand up for your rights.