A NUMBER OF political rallies took place in both northern and southern Taiwan today, between both the Pan-Green and Pan-Blue camps. All of these rallies mobilized tens of thousands of participants.

In Taipei, independent legislator Freddy Lim and the young Pan-Green candidates of the “Democracy Frontline” (民主前線) interparty alliance held a rally and concert on Ketagalan Boulevard this evening. In addition to serving as a legislator, Lim is the frontman of symphonic death metal band Chthonic and holding rallies that double as concerts has been a trademark of Lim since his election victory in 2016. 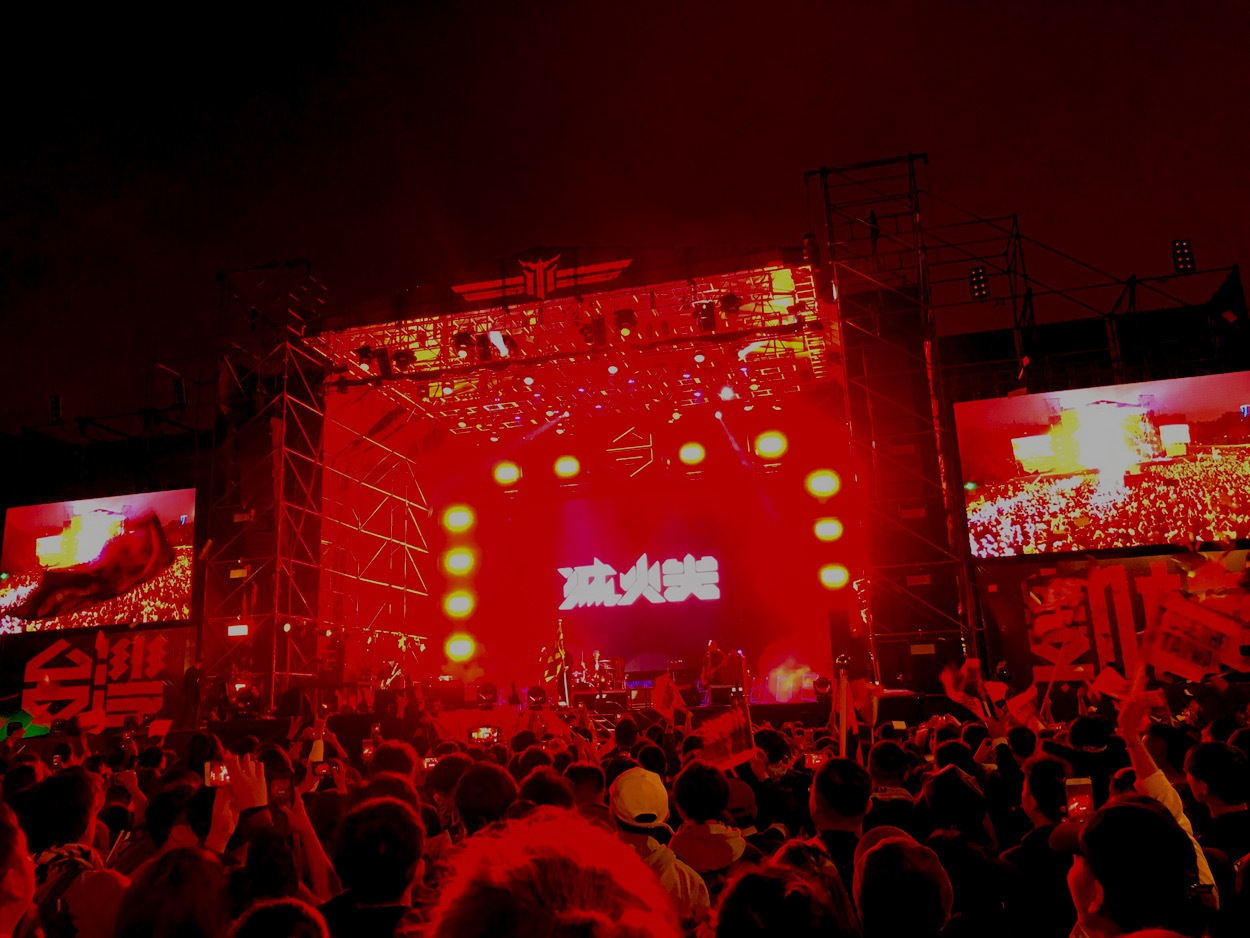 Lai, who became famous in the years prior to the Sunflower Movement for participating in protests while wearing cosplay, dressed as the character Asuka Langley Sohryu from Japanese anime Neon Genesis Evangelion during her appearance at the rally. During his speech, Chen Bo-wei sang “The Buffoon, Kuo-yu” 國瑜草包) song from a viral meme poking fun of KMT presidential candidate Han Kuo-Yu. Members of the “Democracy Frontline” called for Lim’s reelection, cited his achievements, and stated that they had aligned values. Lim is in many ways the leading figure of the “Democracy Frontline” after his departure from the NPP and today’s rally and concert would cement that, although Hung Tzu-yung is technically the convenor of the alliance. 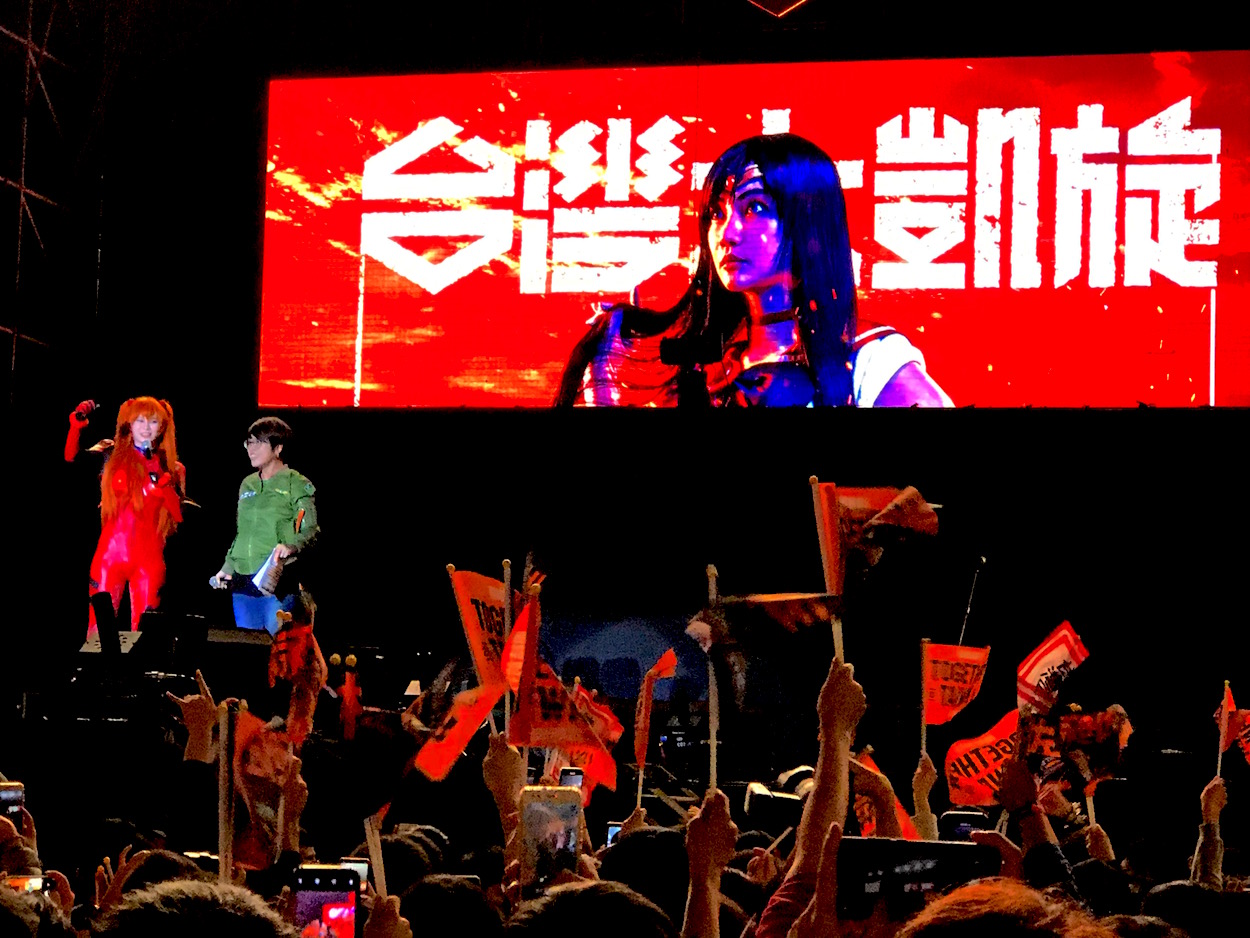 In their comments, speakers touched upon the assault by the KMT on progressive values since the last set of legislative elections, the denigration of female candidates by KMT politicians, and the empty political promises of KMT presidential candidate Han Kuo-Yu. Hong Kong was referenced a number of times by speakers, with the claim that what Taiwan could do for its Hong Kong was to protect its democracy from the KMT’s pro-unification agenda, with attendees chanting Hong Kong protest slogans “Restore Hong Kong, Revolution of Our Times” (光復香港，時代革命) and “Five Demands, Not One Less” (五大需求，缺一不可) in Cantonese. Speakers also touted the achievements of the Tsai administration and cited the need to resist the KMT, emphasizing the need to ensure that pro-China legislators such as party list candidate Wu Sz-huai do not make it into office.

Performers included Fire EX, best known for composing Sunflower Movement anthem Island’s Sunrise, and Lim’s band Chthonic, with the lead singer of fellow metal band Flesh Juicer singing back-up. Fire EX sang its new anthem for the Tsai campaign, “Let Me Stand Up Like a Taiwanese”, it’s recent solidarity anthem for Hong Kong, “A City of Sadness,“ and standards such as ”Goodnight Formosa!“ Chthonic performed backed by a full orchestra and chorus, with its repertoire including standards as ”Supreme Pain for the Tyrant”, and a song commemorating recently legendary Taiwanese independence activist and Marxist Su Beng, “Next Republic”. 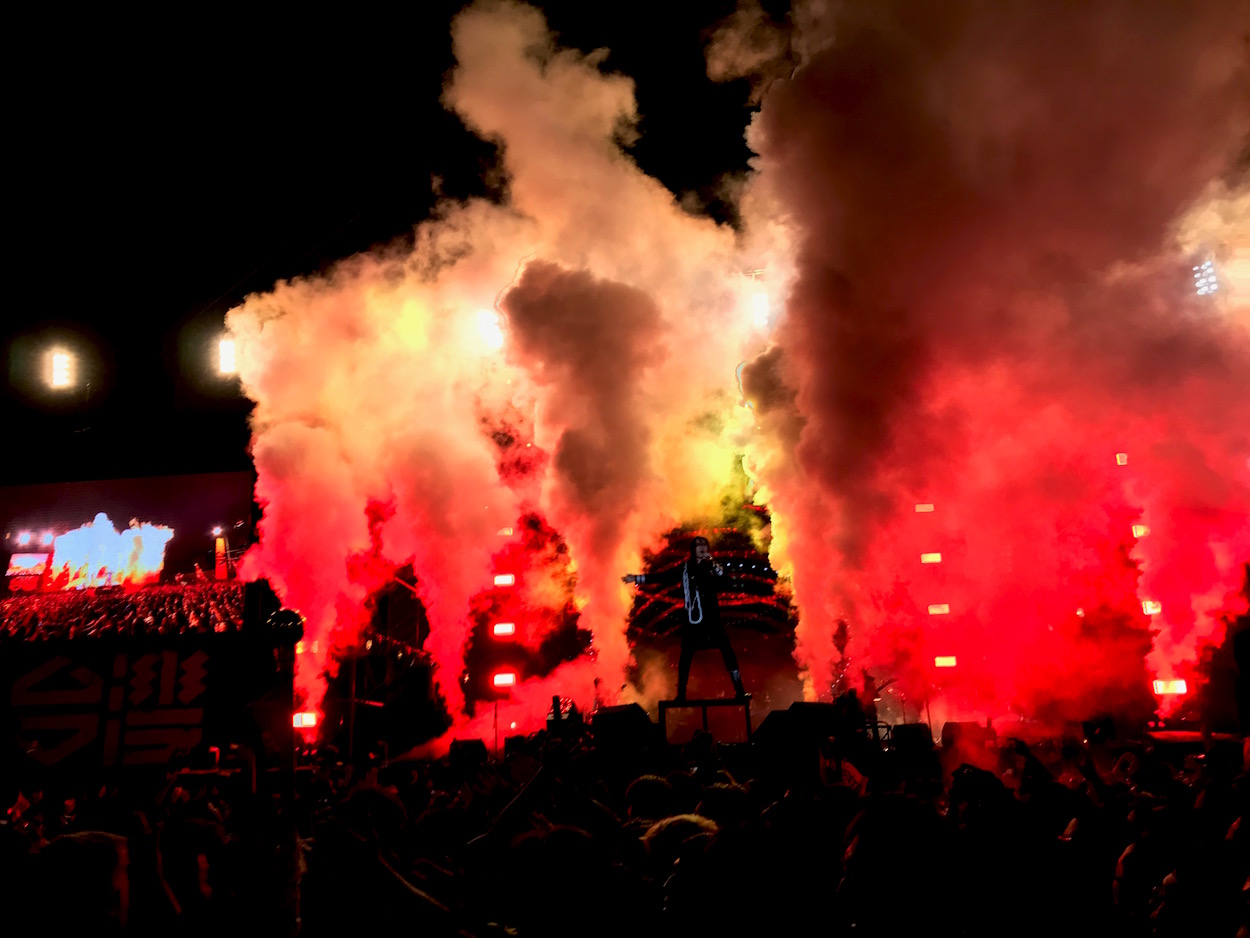 During Chthonic’s performance, concert-goers threw ghost money, and waved Taiwanese independence flags, rainbow flags representing support for LGBTQ rights, flags reading “Restore Hong Kong, Revolution of Our Times”, and Tibetan flags. Mosh pits formed and several individuals crowd surfed, including Chen Bo-wei of the Taiwan Statebuilding Party. At one point, however, an old lady at the front of the crowd decided to leave, resulting in the mosh pit quickly clearing to make way for her.

During Chthonic’s final song, Takao, DPP legislator Yu Tien joined in. Yu is himself a well-known Taiwanese singer. Yu wore heavy metal make-up to make himself look like he had dark circles around his eyes. Yu joked that the circles around his eyes were not make-up, but dark circles from election campaign exhaustion. After beginning to speak, younger participants began to sing iconic songs by Yu Tien, leading Yu to remark on his surprise that young people knew his songs. 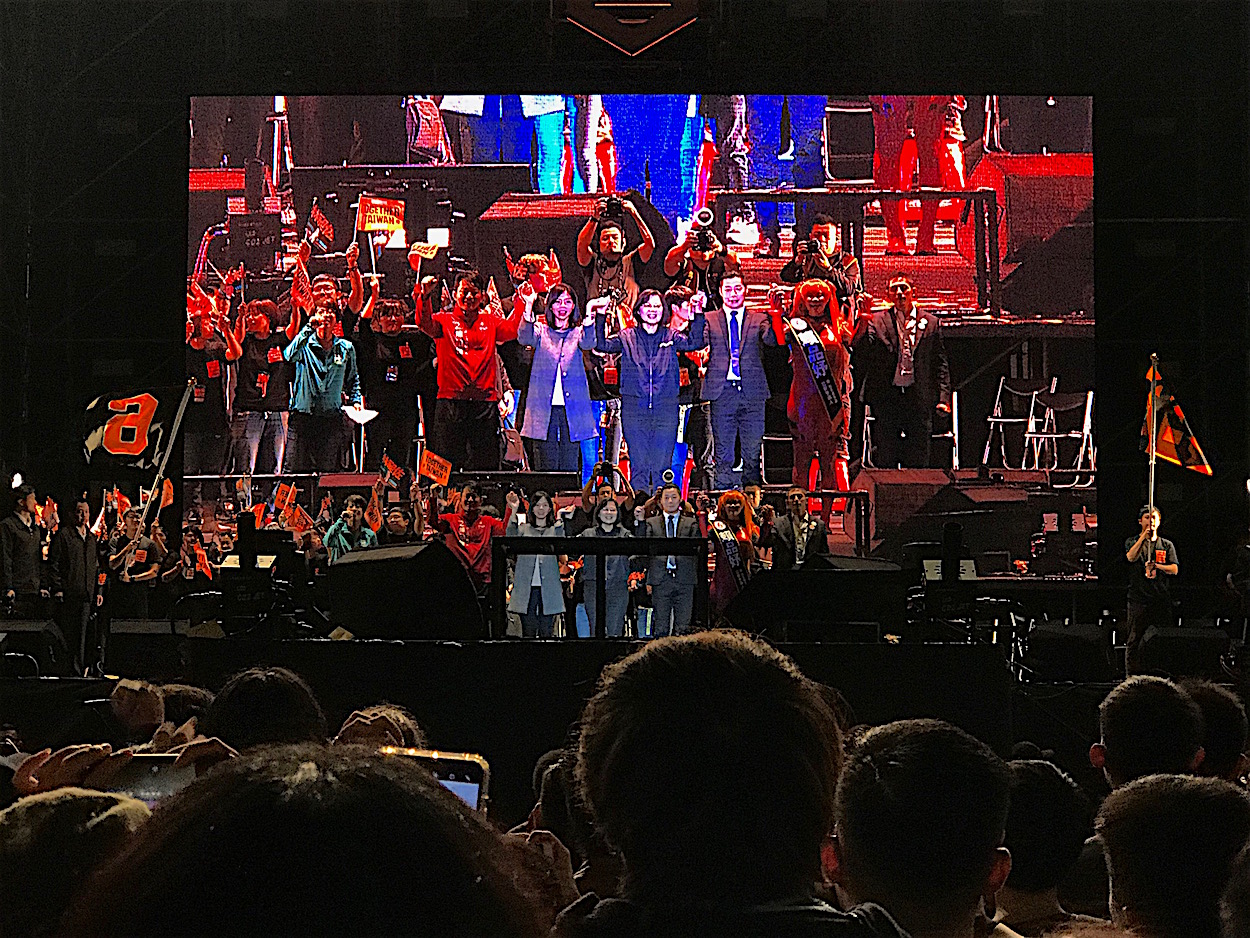 The last two speakers were Lim, who made another appearance after Chthonic’s performance wearing a suit and without his stage make-up, and incumbent president Tsai Ing-wen of the DPP. Lim touted his and the current government’s accomplishments in terms of pushing for progressive values, and advocating for Taiwanese sovereignty, stating that if he can win reelection in Zhongzheng-Wanhua District, that represented that no electoral district was permanently blue.

In Tsai’s speech, in which she appeared somewhat flustered as to what to say to a crowd primarily consisting of young people, Tsai called on voters to support the members of the “Democracy Frontline” as well as her own bid for reelection. Tsai also urged young people to organize poll watching at polling stations. 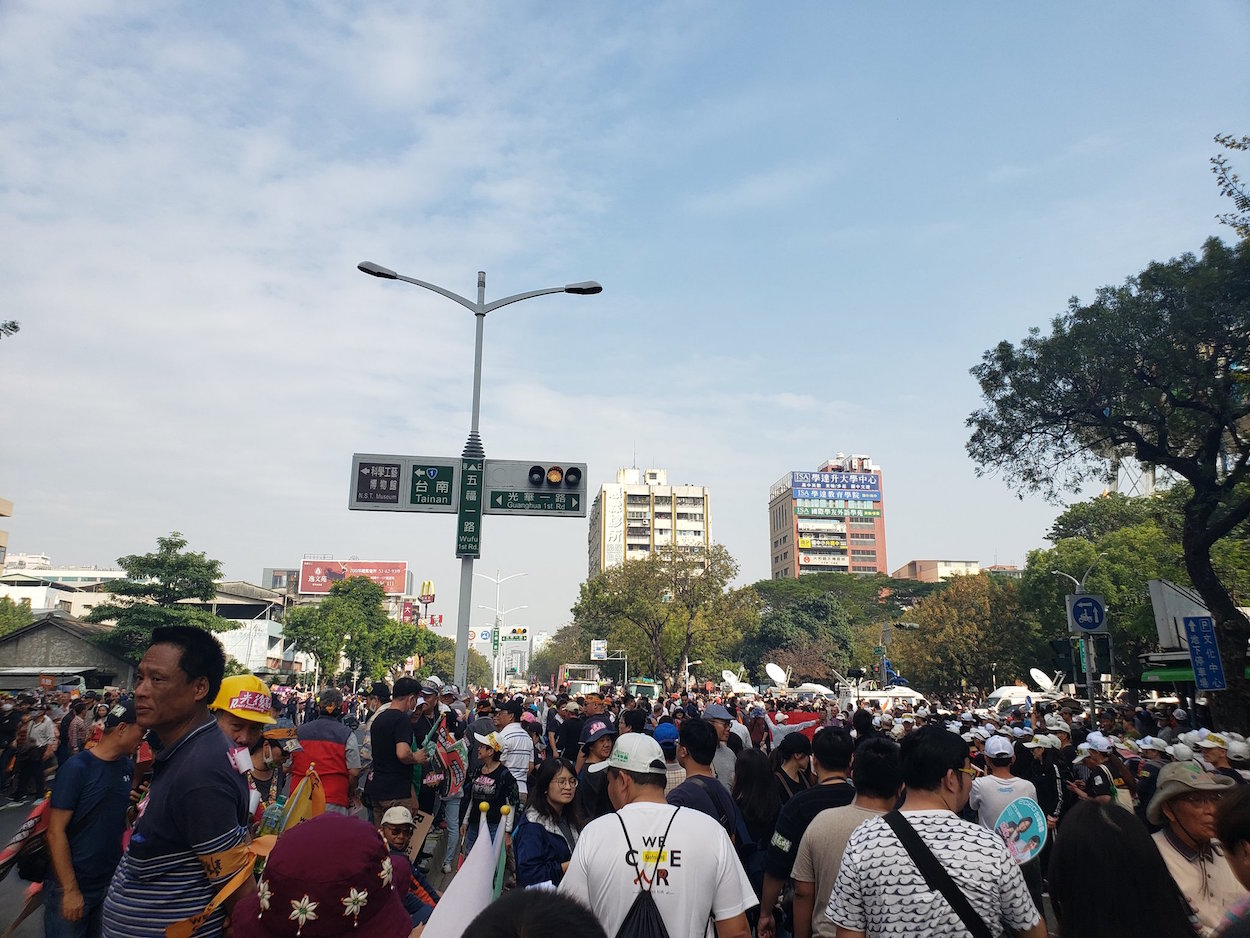 In Kaohsiung this afternoon, the Reset Kaohsiung rally, organized by WeCare Kaohsiung, held a march calling for the recall of Han Kuo-Yu, who is currently mayor of Kaohsiung. With his record as mayor having come under fire in past months and Han having controversially taken three months off to campaign for president, organizers claimed that 500,000 participated in the rally. Signs handed out at the rally termed Han a “liar” and called for his removal for office. The main slogan of the demonstration was “Restore Kaohsiung, Protect Taiwan” (光復高雄，保衛台灣), a pun on “Restore Hong Kong, Revolution of Our Times”.

A rally organized by the KMT in defense of Han was claimed by its organizers to have over 300,000 attendees. At this rally, speakers claimed that Han would defend the ROC as a candidate and cited numerous attacks on the DPP, such as claiming that Tsai’s Ph. D thesis is fake. Thousands of police officers were deployed in order to keep both separate in Kaohsiung.

Further large-scale rallies are planned for coming weeks. A DPP rally is planned for December 28th, targeting pro-China KMT legislators as Wu Sz-huai and others.