How Ongoing Protests in Hong Kong have Connected Majority and Minority

PEOPLE OF Southeast Asian descent have long been a visible part of Hong Kong’s population. However, the way they have been presented in mainstream media, or general cultural stereotypes have often portrayed them as criminals, under-educated or dodgy in Hong Kong. They have been seen as an unwelcome group in many neighborhoods—despite being locally born and raised, they seldom are considered as locals.

“I was rejected for a job as a teacher because I am Indian. And when I moved into my current apartment, after a tough house-hunting process, my landlord told me not to cook too much curry,” said Vasanth, a 30-year-old working professional. 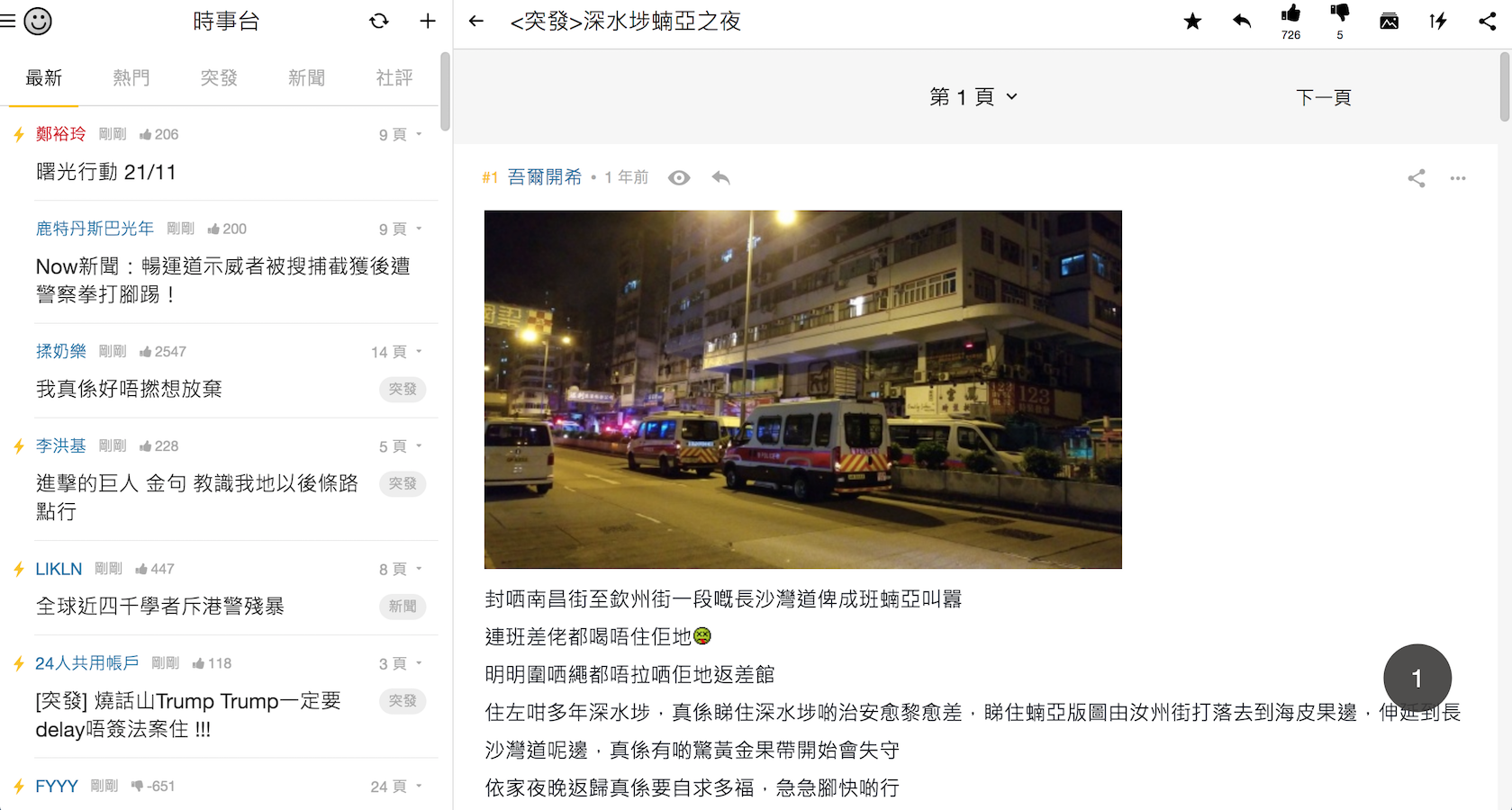 A post on LIHKG with the title “A night with the southern locust”. The writer of the post complains about how Southeast Asians yelling loudly at night and how annoying and disturbing he finds this. He also mentions how “the territory of southern locusts” has been expanding and how the district will “succumb” soon. He closes by reminding residents in that district to watch out

“A Cha (阿差)” is a derogatory term Hongkongers have broadly used against Southeast Asians going back to colonial times. LIHKG, the youth-oriented online forum which has played a key role in the current protests, even invented a new word for them several years ago: “蝻” or “Southern locust”, a Chinese character combining the word “locust” (蝗) and “south” (南). The neologism analogizes the view Southeast Asians taking Hongkongers’ jobs to a locust plague.

“I’d take another route just to avoid walking past Southeast Asians. They catcall girls filthily. I felt unsafe around them,” said Emma, a 21-year-old online news videographer, when asked about her views of Southeast Asians in Hong Kong. One notes that the negative impression of “a cha” persisted even among younger Hongkongers.

Yet in recent months, Southeast Asians have become increasingly visible in the protests in Hong Kong. With a respirator on, Southeast Asians can still be seen on the frontlines, setting up roadblocks and tossing firebombs, just like any other protesters. It is increasingly common for LIHKG users to shout “stand with South Asians” on the street, as well as the Internet. 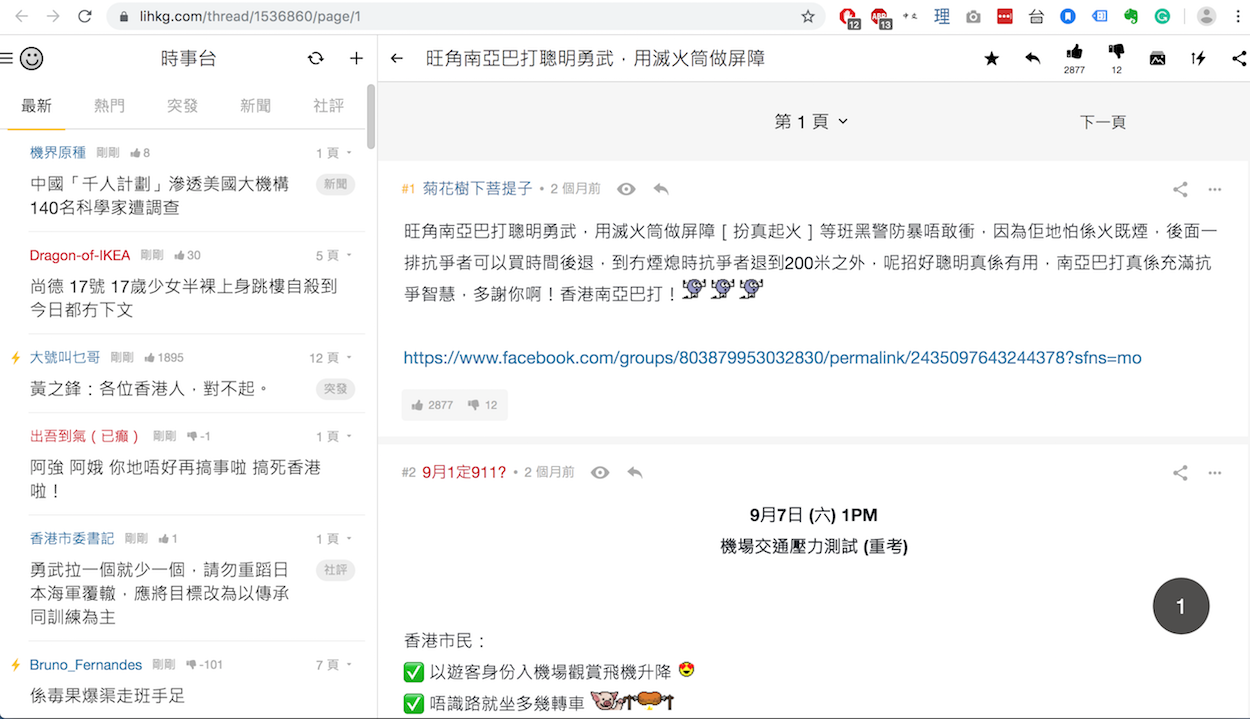 “After I saw quite a few South Asians in those marches and rallies, I realized as long as you were born here and you care about Hong Kong, you are just a person with a conscience, despite your race and language,” Emma, told me, stating that how she sees Southeast Asians changed after covering the protests.

“Your identity doesn’t depend on your race or color, but your beliefs and thoughts, and if you sincerely love Hong Kong,” Ali, a 19-year-old Hong Kong-born Pakistani who frequently protests said to me. Police brutality and the improper governance are what drove not just him, but many others to stand up. 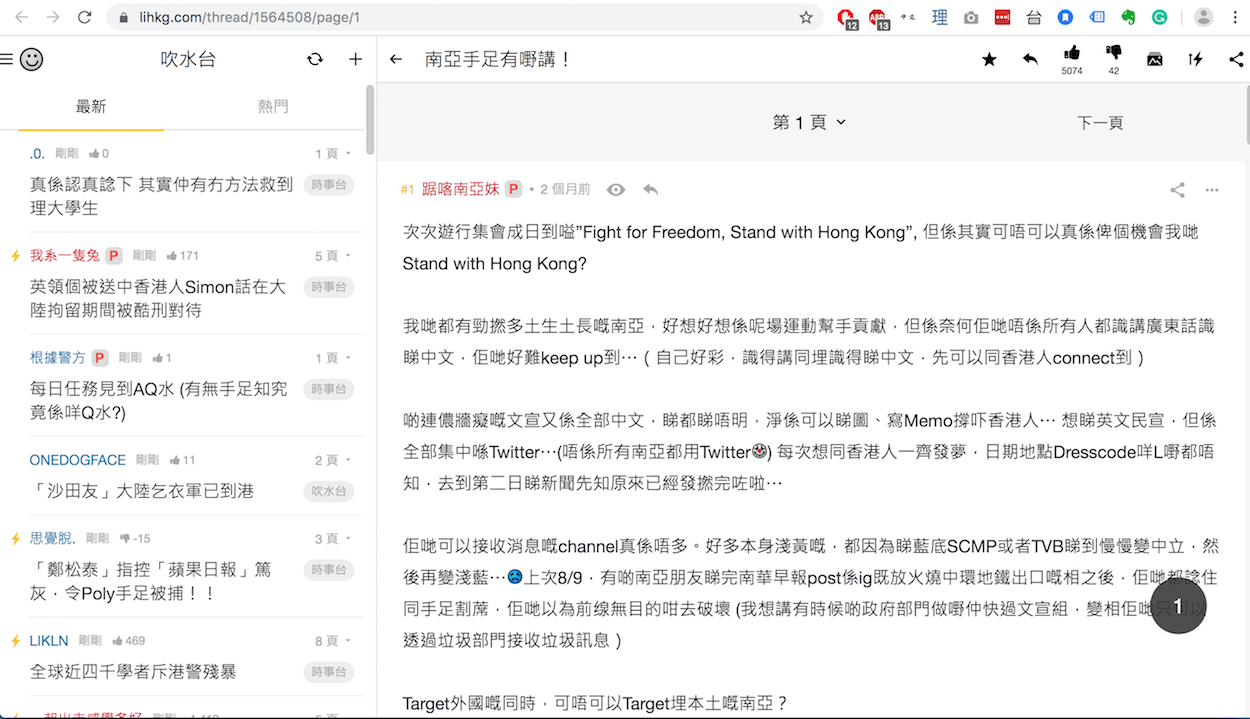 A Hong Kong born Southeast Asian LIHKG user suggesting that the movement should be more inclusive for South Asians by providing updates and news in English. She said there are many South Asians are at the forefront of the protests and want to have a chance to “stand with Hong Kong” for real. This post has gotten more than 5000 upvotes and users commented showing appreciation for “Southeast Asian brothers”

Ali tells me that he received countless smiles from others at the forefront. Many have given him a thumb up or a helping hand when he was building roadblocks. This is the first time he felt welcomed, he says, in the place he’s from. 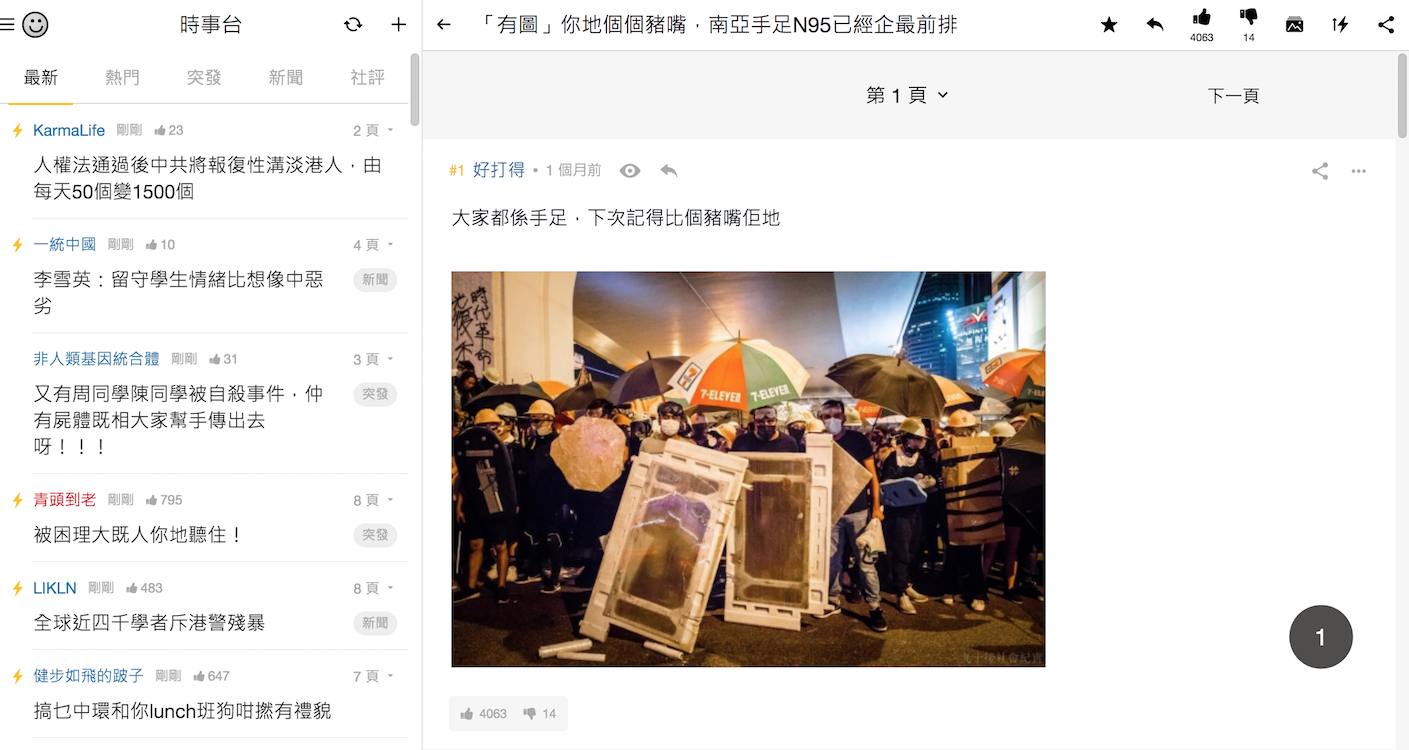 A LIHKG user posted a picture of a Southeast Asian protester with an N95 mask on the frontline, with the comment, “We are all brothers, please get him a decent respirator next time you see him”

On October 16th, four days before a demonstration in Kowloon organized by Hong Kong’s Civil Human Rights Front (CHRF), activist Jimmy Sham—the convenor of the CHDF was attacked by four to five Southeast Asian men with hammers in public. Some LIHKG users, in fact, suggested retaliating by attacking the Kowloon Masjid and Islamic Centre during the demonstration.

This time, people reacted differently. Instead of blaming the Southeast Asians, protesters called on each other to guard the Mosque during the march. Posters declaring that protesters will not damage the Masjid and Islamic Centre were widely spread on the Internet. 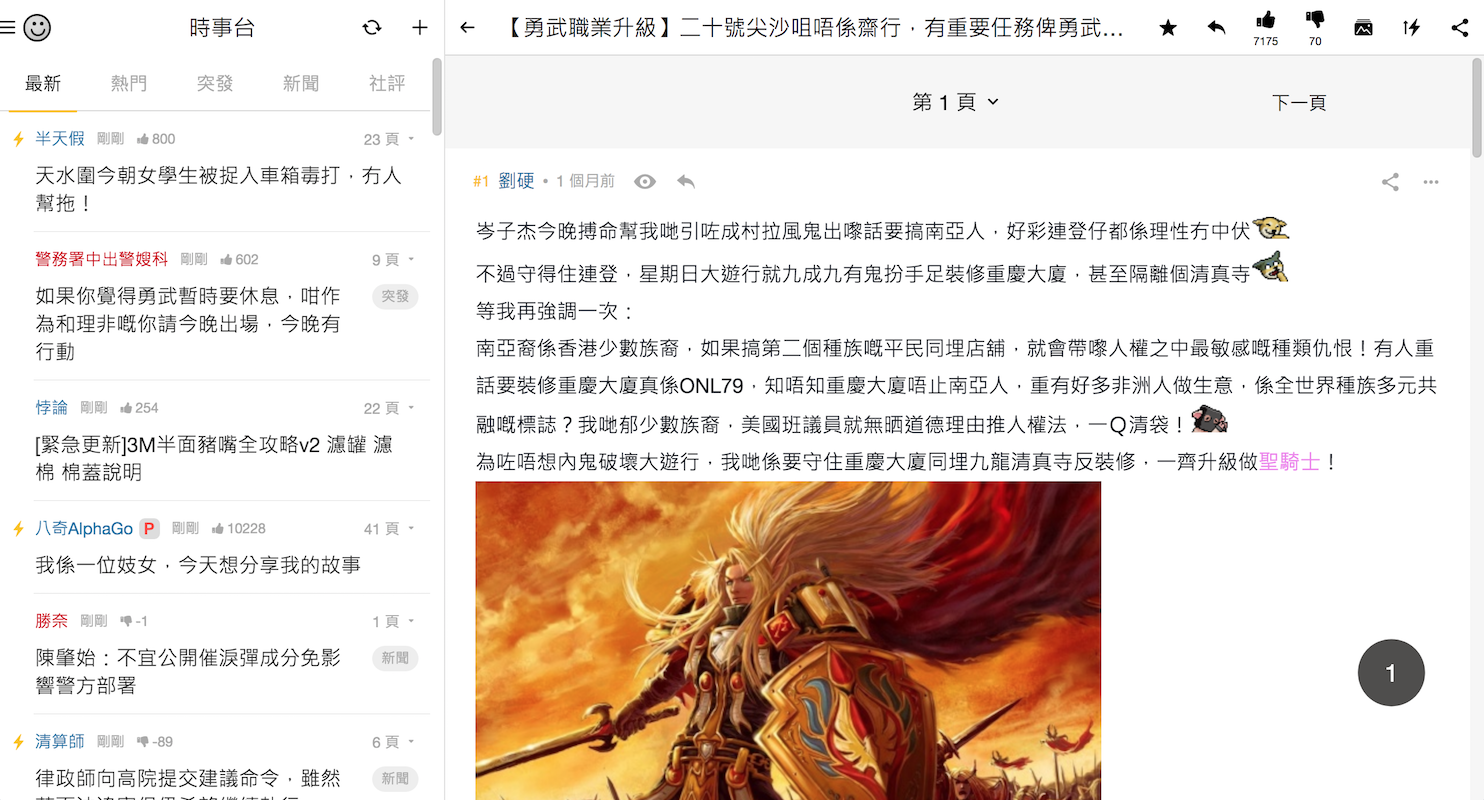 A post on LIHKG calling on frontline protesters to protect “Southeast Asian brothers” during the demonstration, with an explanation on how Hongkongers have been mistakenly portraying Chungking Mansions. This post has gotten more than 7000 upvotes

In the meanwhile, during the Kowloon demonstration on October 21, some South Asians distributed water bottles to protesters outside the Chungking Mansions, which serves as a large gathering place for ethnic minorities in Hong Kong. ‘If protesters damage the Masjid, I’d then also be offending Allah, as we are walking together; I’m part of them, “ said Ali to me.

To date, no one has attacked the Mosque except for the police. During the march, the police fired a water cannon with blue dye at the Kowloon Masjid and Islamic Centre. Footages show there were only several journalists and bystanders by the Mosque. The mosque was stained blue and a few were injured, including Mohan Chugani, the former Chairman of Indian Association. Many members by the public saw this as an unreasonable action by police.

Apologies for it being Epoch Times footage (they’re kinda bad now), but this video of HKPF hosing down the Kowloon mosque speaks for itself. pic.twitter.com/1DYeFJ7A1b

00:31 shows the water cannon truck stopping in front of the Kowloon Masjid and  Islamic Center and firing, hitting the mosque

Immediately, after the blast, protesters went to the mosque, swept dye from its steps and wiped down its gates. Many have strongly condemned the disrespect for religion illustrated by the Hong Kong Police Force.

A few days after the demonstration, some South Asian volunteers organized a “Chungking Mansions cultural tour” to serve as cultural ambassadors. More than 1,300 Hongkongers participated in the event. The Chungking Mansions have become understood as the bright local community, not a dodgy underground.

The tour in Chungking Mansions with Fermi Wong and Wah Jai 華仔 pic.twitter.com/S16Ra5GrBr

“We Connect” was the electioneering slogan of Carrie Lam when she was running for Hong Kong Chief Executive in 2017. Hongkongers often joke about how Carrie Lam has connected everyone by sparking the protests with her Extradition Law Amendment Bill. Hongkongers now seem to be increasingly connected by the pursuit of freedom.