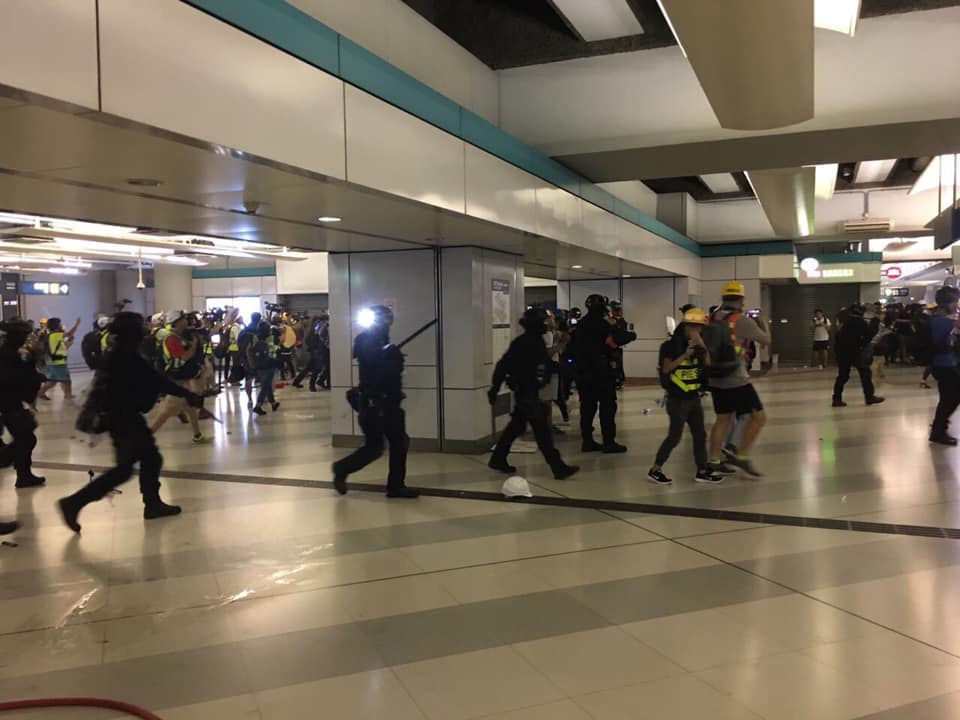 Last week, police responded forty minutes late to attacks on demonstrators in the Yuen Long MRT and shut their doors in the face of demonstrators calling on them to take action. Video footage later emerged of police chatting in a friendly manner with triad members and minimal arrests of triad members took place. As such, police are generally thought to have colluded with triad members, who may have even been hired by the Hong Kong government, or mobilized due to ties with pro-Beijing lawmakers, most notably Junius Ho.

This week’s demonstration is significant because of the high numbers it drew despite being banned by the police. Police refused to approve the demonstration ahead of time, meaning that demonstrators could potentially face up to five years in jail for “unlawful assembly.” Evidently, police banning demonstrations will have limited effectiveness going forward despite the risks. Eleven have already been arrested on charges of “unlawful assembly”.

Because of the police ban, a number of Internet memes joked that the demonstration would instead take place under the auspices of performing an anime-inspired resurrection ceremony for the recently deceased former Chinese premier Li Peng, widely viewed as responsible for the Tiananmen Square Massacre, “International Wife Cake Day,” or playing Pokemon Go. 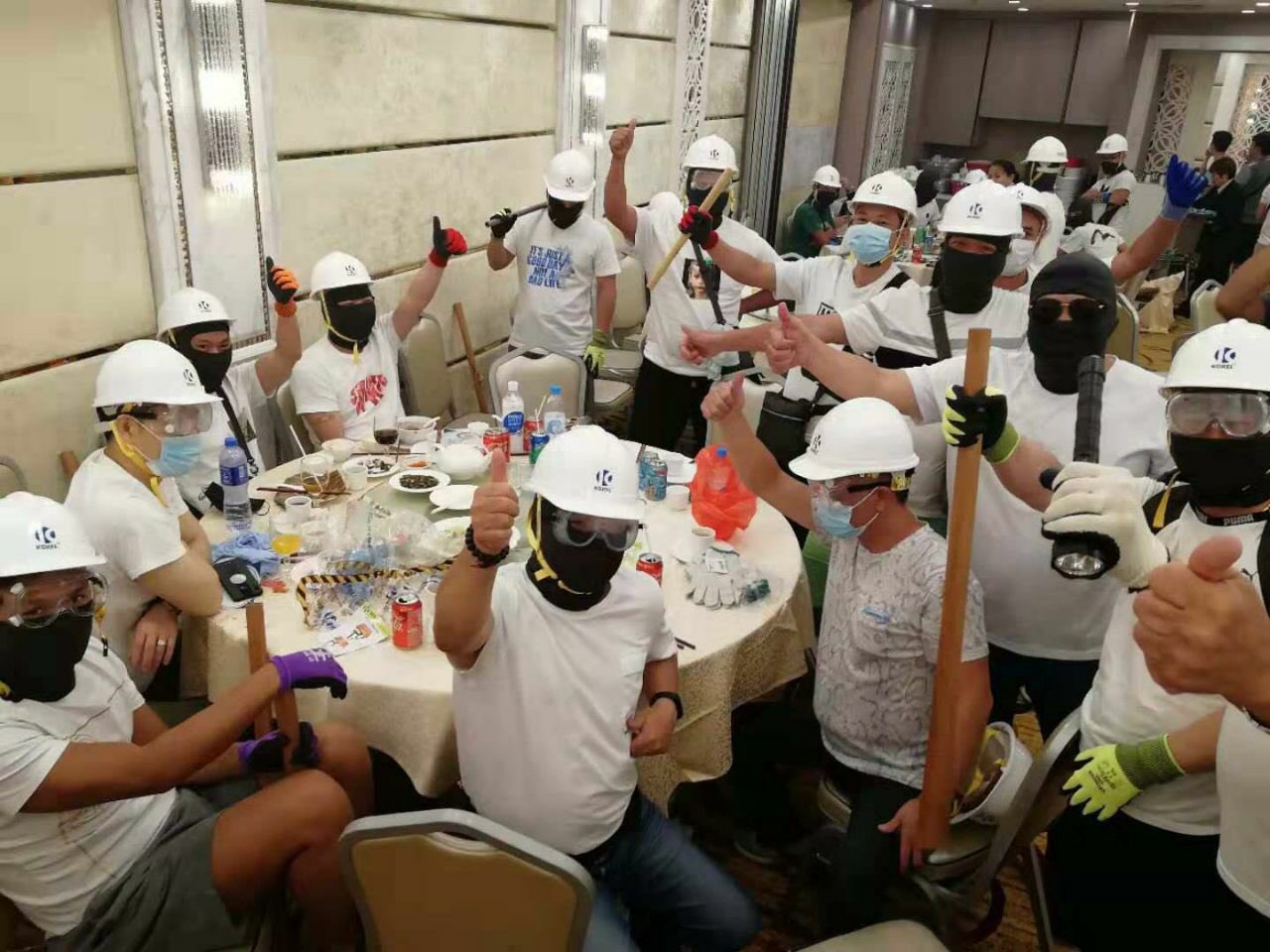 Image widely circulated online showing men in white, thought to be triad members, preparing to attack in a restaurant

The police announced a dispersion operation in Yuen Long around 5 PM yesterday. Among the notable incidents of violence which took place included police firing tear gas and rubber bullets at journalists, attacking a social worker even after they produced their ID, and beating a protester that was already injured bloody in the Yuen Long West Rail Station, leaving bloodstains on the floor of the station.

Many have pointed to the strong visual parallels between police actions this week and triad actions last week in terms of attacking protesters in Yuen Long MRT and train stations, even against demonstrators that were simply attempting to leave. To this extent, though there was no coordinated attacks on demonstrators by triads this week, triads were sighted throughout the day. It was originally feared that triad members might attack in the late night hours after demonstrators were worn down from clashes with police.

An image widely circulated online shows men wearing white thought to be triad members gathering in a restaurant, preparing for an attack, and footage has emerged of purported triad members applauding police. One man was arrested yesterday for attacking demonstrators with a knife, but it is unclear if he was a triad member. There are also at least two incidents in which a number of blunt instruments were found in cars by demonstrators, these cars thought to belong to triad members, or possibly even China’s Liaison Offfice in Hong Kong.

In the meantime, the situation in Hong Kong appears to be as without resolution as ever, protests having long since become a part of everyday life in Hong Kong, and each weekend usually seeing a demonstration that brings with it clashes with the police. 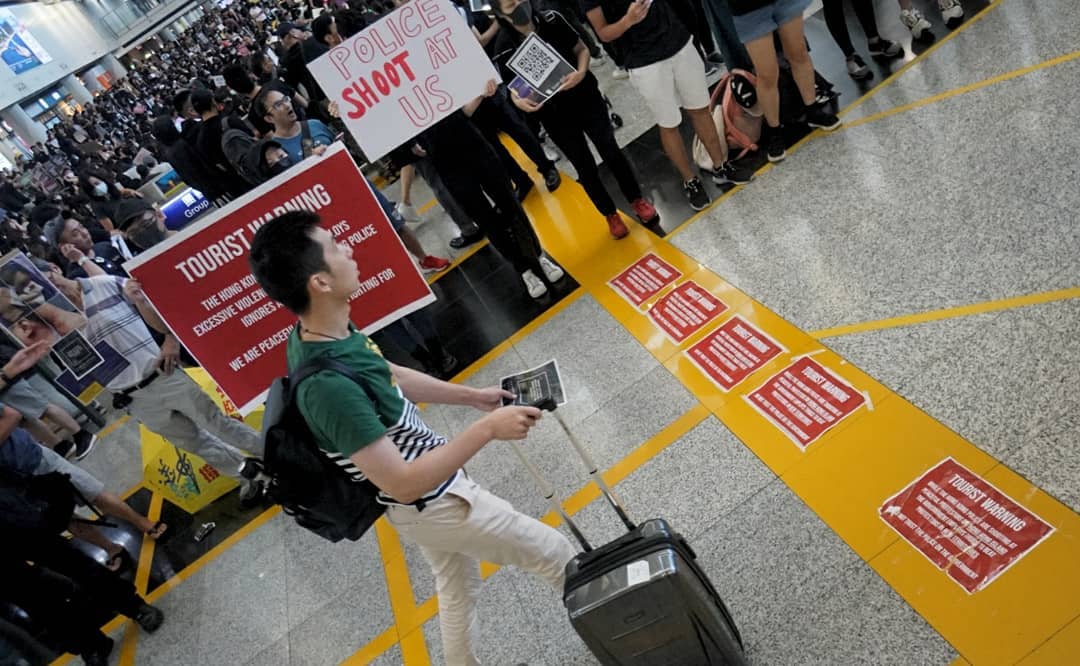 To this extent, new protest tactics may be needed going forward. For example, a demonstration targeting Hong Kong International Airport on Friday saw the arrivals hall of the airport temporarily occupied by over 1,000 protesters, who called on arriving passengers to support the cause of democracy in Hong Kong. If demonstrators had genuinely occupied Hong Kong International Airport, disrupting air traffic, the pressure on the Hong Kong government and China to acquiesce to the demands of protesters would have likely been higher. It is possible that targeting logistical choke points in Hong Kong which stand to affect China could be a path forward, instead of simply continuing to hold weekly protests.