DEMONSTRATORS HAVE now been trapped within the Hong Kong Polytechnic University (HKPU), surrounded by police and with exits to the university sealed, for over 48 hours now. Those still trapped in HKPU face the threat of eventually running out of supplies, such as food and water.

It is thought that many of those remaining in HKPU are injured after weathering many hours of police assaults and, if not injured, those in HKPU are likely exhausted. Surrounding hospitals are reportedly receiving a large number of in-patients with injuries from HKPU. Some believe that dead birds found on the HKPU campus may have died due to being affected by the excessive level of tear gas fired by police. 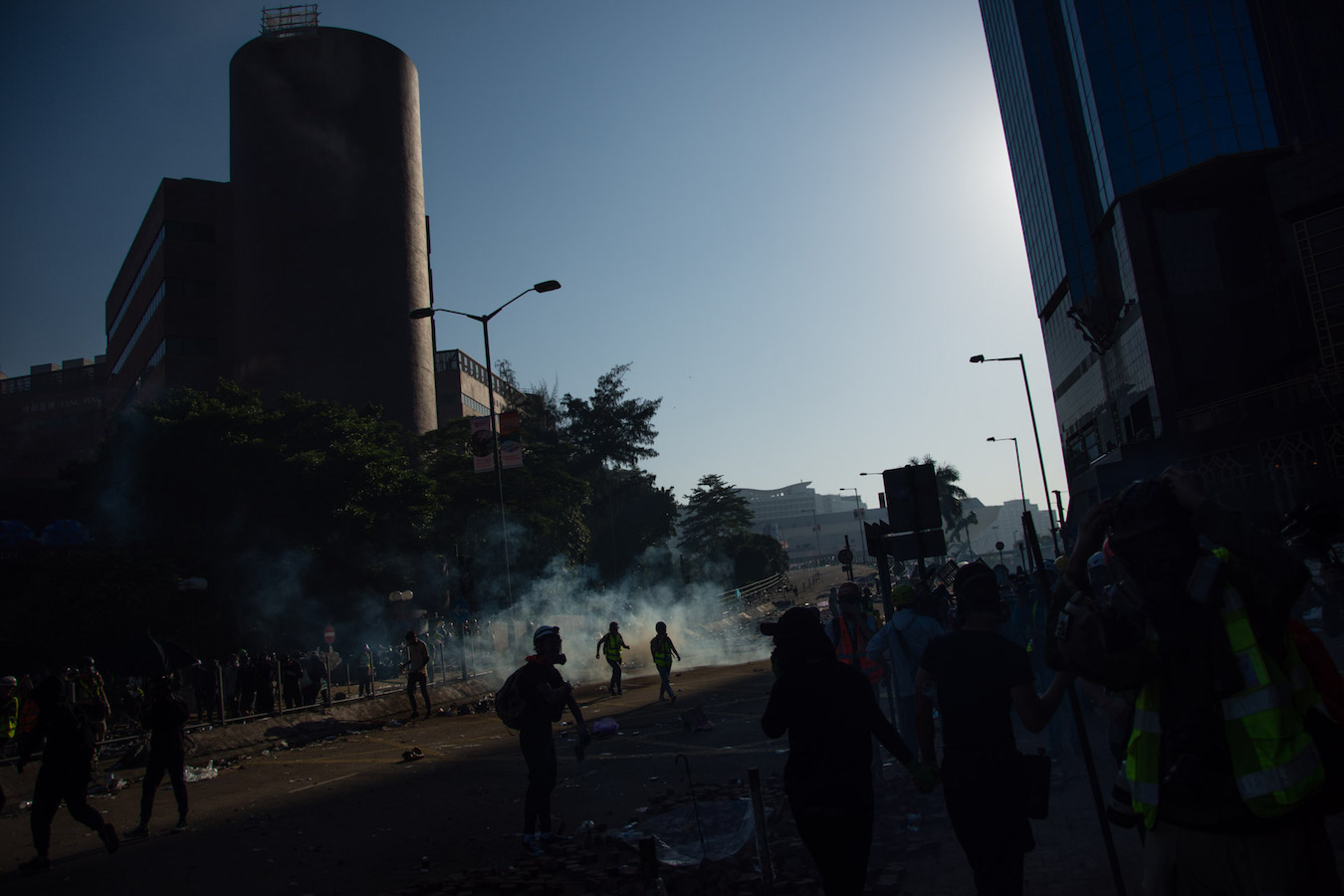 The exact number of demonstrators remaining in HKPU is unknown, although the HKPU student union has stated that between two hundred to three hundred students are still within the university. It is known that some of the students still on the HKPU campus are not from Hong Kong, including at least one Taiwanese student who was arrested earlier today. Those trapped on campus face ten years in jail or more on charges of “rioting”.

Last night, demonstrators attempted a dramatic escape by motorcycle, rappelling down by rope from an overpass onto motorcycles that were waiting below. Motorcycles riders then sped away with their passengers, sometimes while being fired upon by police with tear gas. Counts differ as to how many demonstrators managed to escape this way, but it is generally thought that between fifty and one hundred demonstrators were able to escape before being discovered by police. 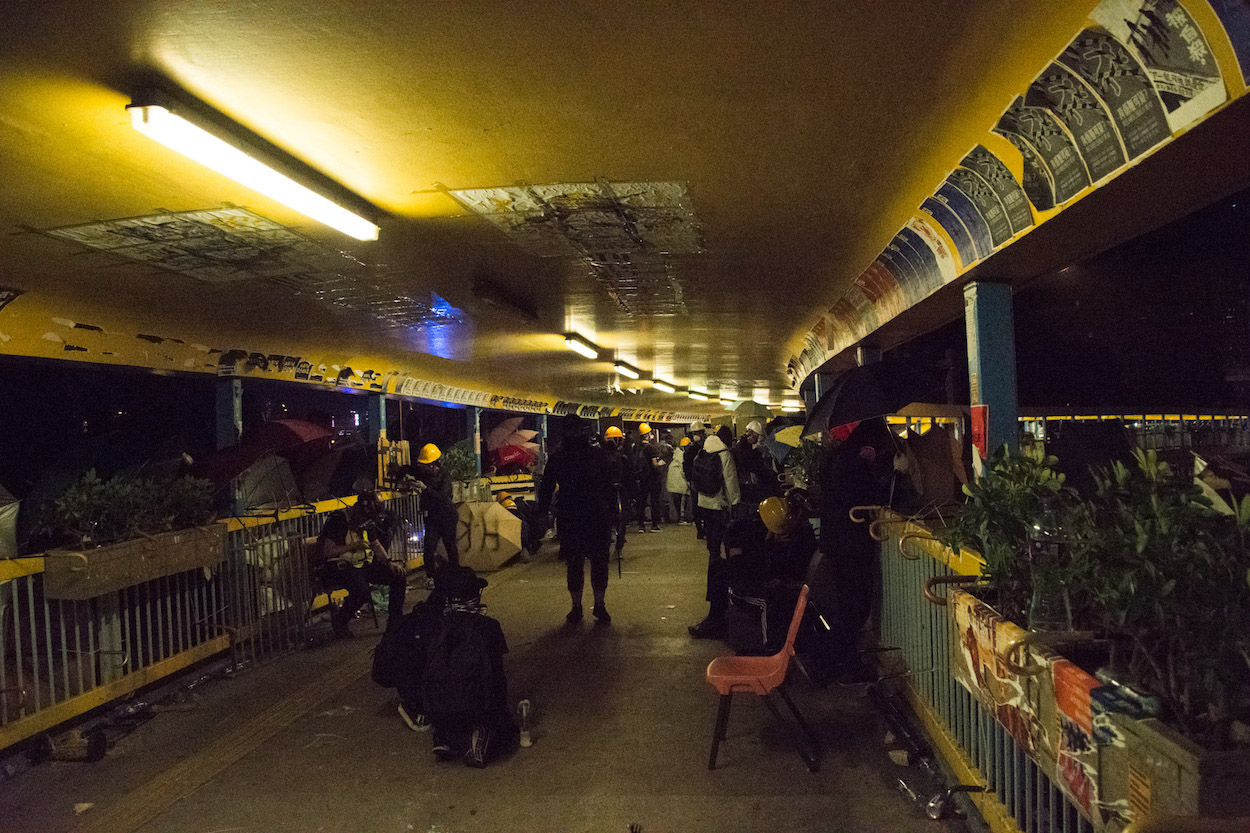 Pictures circulating online that some demonstrators may have severely injured their hands by rappelling down in this way. Some students also attempted to escape through a drain, but at least some turned back, feeling ill due to the gases in the sewer, and some reports claim that some of those who attempted to escape through drains are now missing.

Over 40 secondary school heads went to HKPU to negotiate with police yesterday, Eventually, pro-Beijing lawmaker Jasper Tsang led one hundred students off of the campus last night. Police did not arrest these students, but took down their names and reserved the right to future legal action. It is thought that over half of this group of students were secondary school students. An Apple Daily report claims that Tsang may have deliberately sought to get the daughter of former Shanghai mayor and Chinese premier Zhu Rong-ji off-campus, with some accusations on the Internet that Tsang was attempting to rescue the children of elites.

Demonstrations in the area around HKPU have been intensive, with protestors hoping to create windows of opportunities for those trapped within HKPU to escape if they are able to distract police. This has led to the arrest of over 50 in the Tsim Sha Tsui area on Monday. Police are accused of deliberately trying to ram protestors with vehicles during crowd clearance operations in Yau Ma Tei. The number of protestors demonstrating around the HKPU campus as part of efforts is thought to be in the tens of thousands. 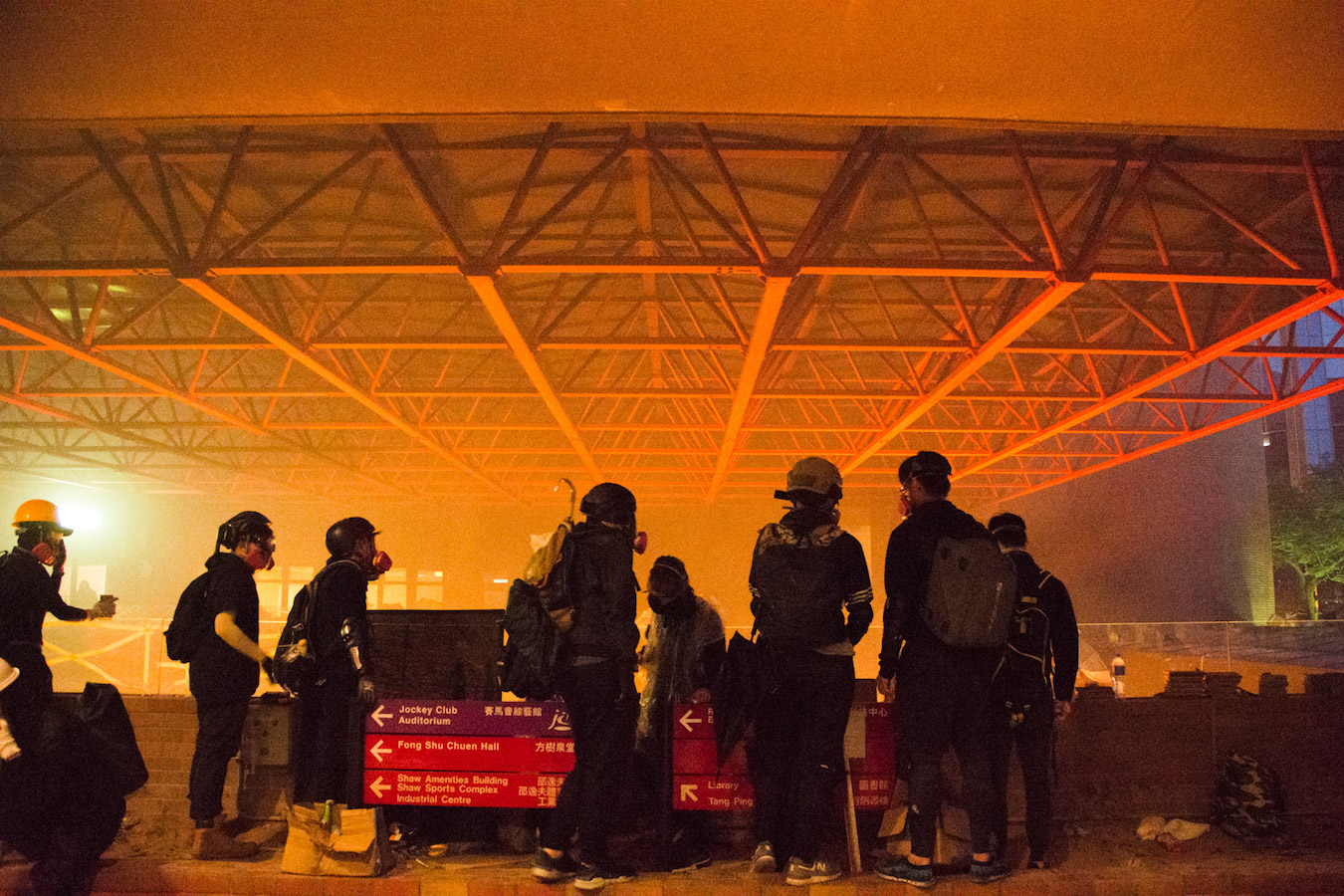 One hundred social workers also went to Tsim Sha Tsui to demand access to HKPU yesterday. Likewise, the Red Cross sent a team of fourteen onto the HKPU campus to provide medical aid and distribute medical supplies and water. However, police have at other times arrested medics as they were attempting to leave the HKPU campus, something that has led medical organizations to issue condemnations of the actions of the Hong Kong police. Over 20 medical personnel that remain trapped in HKPU also issued a condemnation of the actions of the Hong Kong police this afternoon.

In a similar timeframe, outrage has broken out against international human rights NGO Médecins Sans Frontières (MSF) for declining to provide aid in Hong Kong during the current crisis, with some citing the reports showing that the MSF received 518 million Hong Kong Dollars in donations from Hong Kong in just 2018.

Among those to call for a peaceful resolution to the current situation include Christian and Daoist religious leaders, signatories of an international petition, and parents of those trapped on-campus. Hong Kong Chief Executive Carrie Lam has also urged a peaceful solution to the situation, even as the Hong Kong police continues to claim that those trapped on the HKPU campus are dangerous rioters, and questions abound as to whether the Hong Kong police’s actions are aimed at violent retribution against protestors. 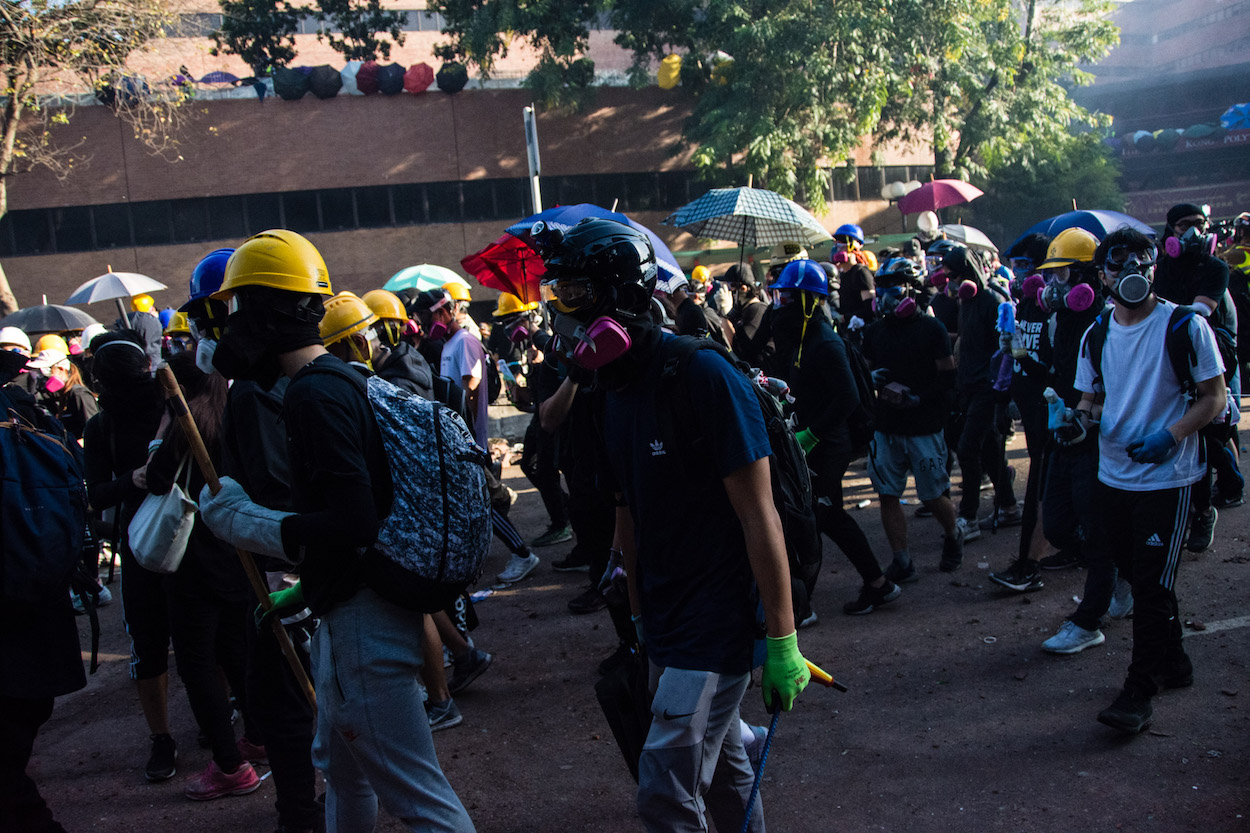 This is not the first time that a decision of the Hong Kong judiciary was overturned by the Chinese government since the 1997 Handover. But the ruling has prompted reactions that this is a sign of the demise of the rule of law in Hong Kong and One Country, Two Systems. Either way, this statement by the National People’s Congress serves as a reminder that the authority of the Hong Kong government is superseded by that of Beijing.

Questions remain about whether the Hong Kong government will cancel district councilor elections, which are scheduled for Sunday. Secretary for Constitutional and Mainland Affairs Patrick Nip stated yesterday that the current unrest had “reduced the chance” of holding elections, though this is likely to be another act that outrages the Hong Kong public.