Though a general strike had been called for on November 11th ahead of time, the death on Friday of a 22-year-old protestor that fell from a car park during a police clearance operation last week, as the first confirmed death of the protests to date, and the emergence of allegations of the gang rape of a 18-year-old woman by police officers in mid-September were enraging of many members of the Hong Kong public. As such, the weekend saw a number of clashes between protesters and police, with police tear-gassing memorials ceremonies for the deceased Alex Chow Tsz-lok, and seven pro-democratic lawmakers arrested in a crackdown by authorities.

That violence yesterday would be intensive was apparent from early morning onward. Large-scale police operations continued through the night and, before 7 AM, police were already conducting arrests, with protest actions in the early morning by demonstrators aimed at disrupting the early morning commute.

Around 7:15 AM, police fired at two protesters wearing black outside the Tai On Building in Sai Wan Ho with live ammunition. One of the two individuals was hit in the stomach, a 21-year-old, was hit in the stomach and appeared to be unconscious on the ground, though police still moved him. He was subsequently transported to the to Pamela Youde Nethersole Eastern Hospital and required surgery for his liver and kidney, with a crushed renal vein. Reports state that his heart stopped once during the operation and that he remains in critical condition.

Footage from early morning also showed a police officer riding a motorcycle driving deliberately into a crowd several times, deliberately aiming to hit protestors. Footage of this incident had already begun circulating widely on the Internet by 9 AM.

By 8 AM, police also invaded the campus of Chinese University and began firing pepper balls and tear gas at demonstrators. This was the first time that police had tear gassed a campus during the protests to date, taking place despite that Chinese University had already suspended classes for the day. Riot police also entered the Holy Cross Church in Sai Wan Ho to make arrests, making this the first time that riot police have entered a church to make arrests during the demonstrations.

Clashes between demonstrators and police persisted across multiple districts of Hong Kong, leading 11 universities to cancel classes for the day. Two ten-year-olds were among those arrested, possibly making them the youngest individuals arrested during the demonstrations to date. Clashes continued into the night.

Barely 9 o’clock in the morning, and across the other side of town, in Kwai Fong, a traffic cop gone berserk on a motorcycle is running protesters over. Several injuries reported. Watch till the very end. It’s very disturbing. pic.twitter.com/KlAeEIGGLA

Apart from police violence, shocking, too, have images of a middle-aged man wearing green being set on fire with gasoline by individuals wearing black on a footbridge of the MOSMall. It is thought that this man was arguing with demonstrators ahead of time, accusing them of being British, and video footage appears to show the same man clashing with and chasing demonstrators. As with past incidents of violence by individuals wearing black that seemed to be demonstrators, such as the beating of a Global Times reporter in the Hong Kong International Airport in August, there have also been accusations online that this was a false flag incident and accusations that the man was faking burn injuries, leading the Hong Kong Hospital Authority to later state that there was in fact a man admitted admitted to the Prince of Wales Hospital in critical condition from burn injuries. The incident took place around noon.

For its part, the Hong Kong Police Force has defended the shooting that took place outside the Tai On Building, stating that this was a police officer acting because he felt his life was in danger, but claiming that it has suspended the police officer that drove his motorcycle into the crowd of protesters. Hong Kong Chief Executive Carrie Lam claimed during a press conference at 6 PM that the condition the burnt man was more serious condition than the 21-one-year-old that was shot and deemed protesters to not only be destroying social order in Hong Kong but to be “enemies of the people.”

Other rumors regarding violence from yesterday have not been verified. Images that started circulating in the morning purported to show that the mother of 15-year-old Chan Yin-lam, whose drowned body was found last month, had killed herself by leaping from a height. Some suspect foul play regarding Chan’s death, who was a student protester and a competitive swimmer, with some accusing police of having possibly killed Lam and attempted to cover up the incident. Likewise, rumors from Sunday that a fatality had taken place during police clearance operations in the Festival Walk shopping mall that day have also not been cleared up, though it is known that a protester was beaten unconscious during the course of this. 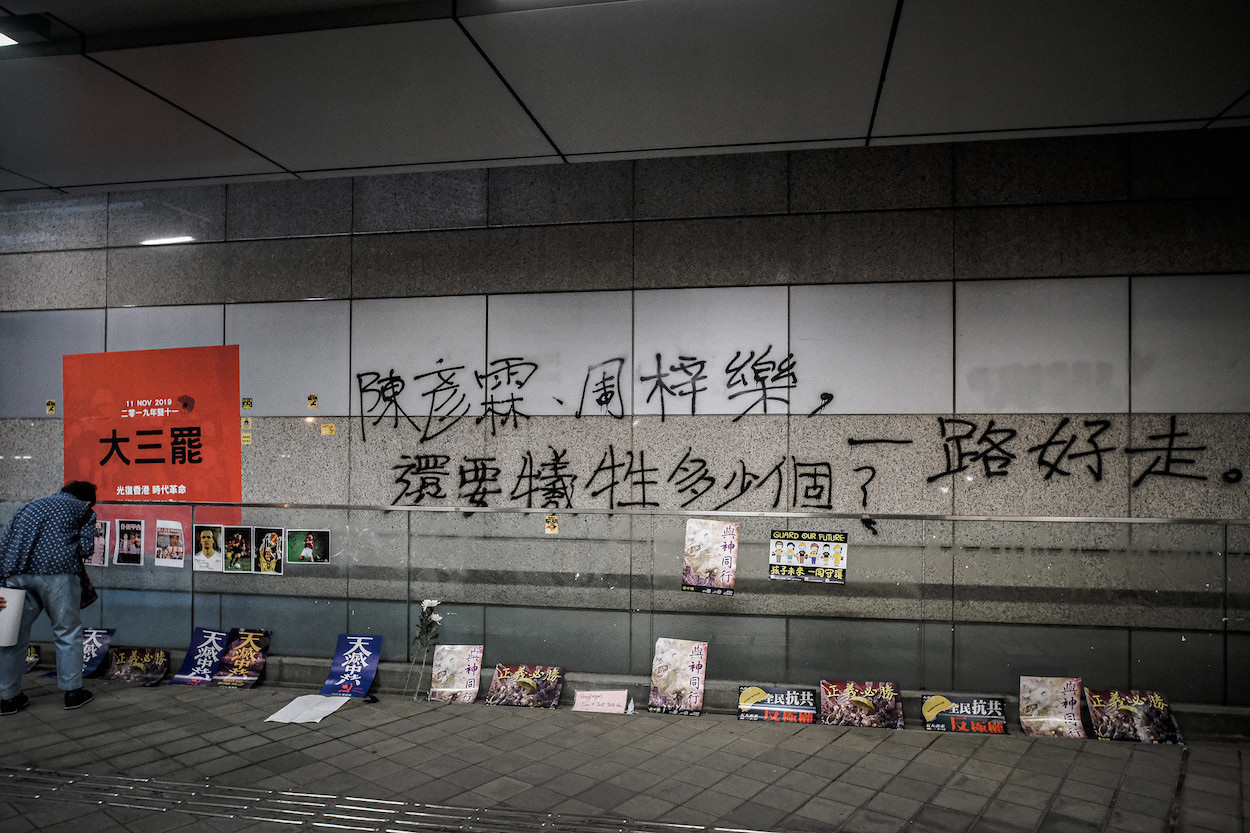 But one generally does not expect any escalation in the level of violence to lead to the current set of protests to die down. On the contrary, with increasing outrage after waves of violence against demonstrators from police, it is in fact quite likely that this will simply fuel more protests.