INTENSIVE PROTESTS took place over the weekend yet again in Hong Kong, with demonstrations Sunday taking place in eighteen districts of the city. The past week has seen a number of incidents regarding police brutality against Hong Kong citizens explode out into the open, leading to a fresh round of outrage against police.

On Friday night, demonstrators carried the 13-foot “Lady Liberty” statue which has been a frequent sight at protests onto Lion Rock, where it is planned for the statue to remain. The statue was carried up in two pieces by a group of climbers, though it was later vandalized. Demonstrators have also taken to a campaign of folding paper cranes, to form words such as “Free HK” recently. A group of elderly demonstrators also head a 48-hour sit-in outside of police headquarters. But, as in past weeks, demonstrators also clashed with police, built blockades, set fires on city streets and near MTR stations and police stations, and threw Molotov cocktails.

Mass arrests were carried out by police. As with before, videos of arrests have shown clear police brutality. Police were filmed pepper-spraying journalists, using pepper spray in indoor shopping malls, and there have been repeated incidents of undercover police disguised as protestors taking action against demonstrators, inclusive of an incident in which a masked man was sighted in the Sheung Shui MTR station after it was closed.

Public distrust of the police seems to have reached new levels after several incidents in the past week. Police were already accused by members of the public of having possibly killed protesters in the course of crowd dispersion efforts in late August, but having covered up the deaths. Some have pointed to deaths officially listed as suicides as possibly cover-up efforts. This led demonstrators to set up a memorial outside the Prince Edward MTR station to possibly deceased demonstrators.

Such suspicions continue. On October 12th, an ad appeared in the Apple Daily listing the names of 118 suicides since June deemed to be suspicious by whoever took out the ad.

On Friday, the body of a fifteen-year-old girl surnamed Chan known to have participated in the ongoing demonstrations was discovered in the sea near Yau Tung, with some accusing the Hong Kong police of having possibly murdered her and attempted to cover up the death. Many call on the Hong Kong police to release CCTV footage of the events leading up to Chan’s death.

Reports of sexual assaults committed against demonstrators by police, both male and female, have already come up on numerous occasions in the past. However, such reports are again in the news after Sonia Ng, a student at the Chinese University of Hong Kong, went public with an account of being sexually abused by guards at the San Uk Ling detention center, from which many stories of police abuses have emerged in the past weeks. Rumors also presently circulate that the Hong Kong government intends to construct a new large-scale detention center in Heung Yuen Wai, something the Hong Kong government has denied. 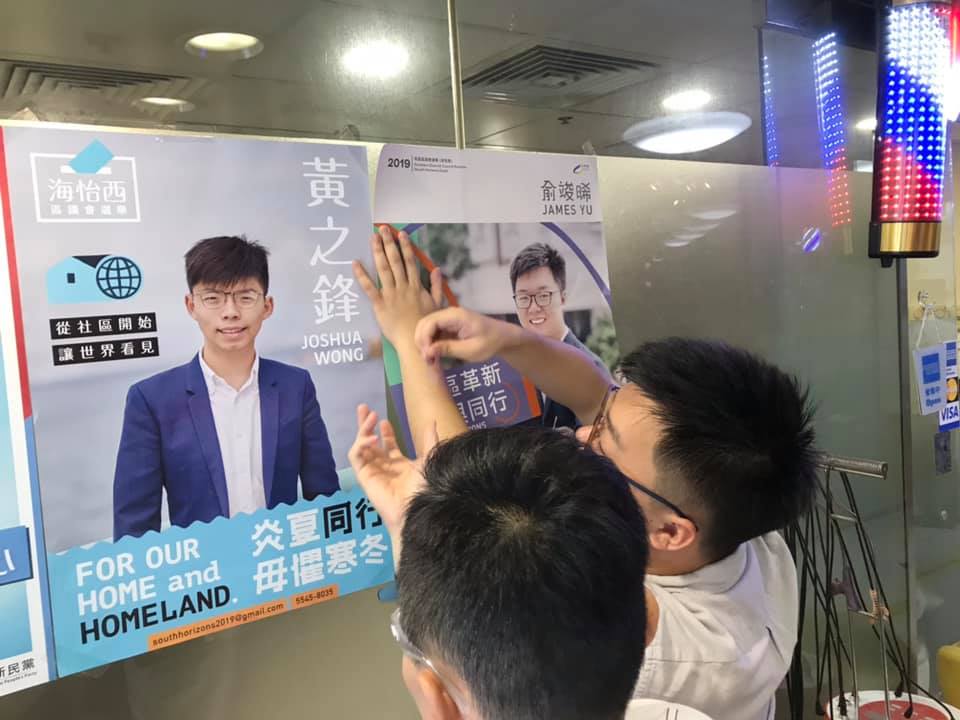 Protestors have themselves been among those discussing whether they should attempt to deescalate protests, but one generally expects police violence against demonstrators to continue to escalate. In the past week, five MOSTown security guards were arrested for attempting to prevent police officers from entering the mall on October 7th. Attacks by pro-Beijing gangsters on pro-democracy activists and politicians continue, as observed in attacks on youth candidates running in the upcoming district elections.

Some question whether upcoming district council elections next month could potentially redirect the energy of demonstrations into electoral politics. Joshua Wong of Demosisto, for example, is planning on running in the elections, though Wong and Demosisto likely do not actually expect to win. This may be tactical, as reactions of the Hong Kong government vis-a-vis district elections could lead to a new round of outrage from the Hong Kong public if, as in the past, it decides to ban candidates, disqualify victorious candidates, or even decide to cancel elections altogether.

Indeed, with the invocation of emergency powers by Chief Executive Carrie Lam to ban face masks during protests, some speculation has focused on whether Lam will use these emergency powers to carry out other measures aimed at clamping down on protests. It has been speculated that Lam could suspend the Internet in Hong Kong, block websites, or enforce a curfew.

Either way, measures taken by the Chinese government to try and enforce its political will regarding Hong Kong abroad and self-censorship by western companies for fear of negative reactions from China have become more widely discussed as of late. This is after a number of recent events, including Blizzard Entertainment stripping a professional World of Warcraft player from Hong Kong of his winnings after he declared support for the protests during a Taiwanese tournament, Apple removing an app used by Hong Kong demonstrators to evade the Hong Kong police, a retraction by the NBA after the manager of the Houston Rockets expressed support for Hong Kong, and the Chinese government banning South Park after an episode critical of the Chinese government.

Although news broke in the past week that American president Donald Trump had offered to drop Hong Kong as a political issue as part of trade negotiations with Chinese president Xi Jinping, Trump claiming that the demonstrations were receding, Republicans hawkish against China have continued to use Hong Kong as a wedge issue against China.

On @FaceTheNation: What’s happening in Hong Kong is inspiring. We’ve seen over 2 million people standing up for freedom, for democracy & standing up against the oppression of the Chinese communist regime. It is very much in America’s interests to support freedom fighters in HK. pic.twitter.com/ZfvrbpWtk8

Interview with Ted Cruz regarding his visit to Hong Kong

In the past week, Republican senator Ted Cruz visited Hong Kong after a visit to Taiwan and originally planned to meet with Carrie Lam regarding the current situation in Hong Kong. But Lam later cancelled the meeting, leading to condemnations from Cruz. Some in Hong Kong still continue to bank on American pressure, particularly from Republicans, as a way to pressure the Chinese and Hong Kong governments. One generally expects such idealization of America to continue from many demonstrators in Hong Kong.

But, in the meantime, the future direction of demonstrations in Hong Kong remains as unclear as ever. More will become clear with time, though it is apparent that the present may be a period of transition for the protests.