CLASHES BETWEEN demonstrators and police took place outside of police stations in Kwai Chung, Sai Wan Ho, and Tin Shui Wai in Hong Kong last night, with demonstrators protesting the arrest of dozens of demonstrators the preceding night.

Demonstrators protested despite outbreaks of rain from a typhoon nearing Hong Kong into the early morning hours. 49 were on arrested Sunday after a demonstration in Sheung Wan that organizers claim 11,000 participated in, with many demonstrators being held for over 48 hours. The demonstrations yesterday night were not called for in advance.

Yesterday morning saw calls for a strike by MTR drivers, with demonstrators halting or causing disruption to MTR traffic on the Island, Kwun Tong, Tseung Kwan O, and Tsuen Wan lines, preventing some trains from leaving for close to two hours.

Demonstrations at night outside of police stations in Kwai Chung, Sai Wan Ho and Tin Shui Wai in the evening broke out with little advance notice, however, involving hundreds gathering outside of police stations and skirmishes with the police. Demonstrators threw eggs and objects at police and projected lasers at police, not only with the aim of blinding police but also of obscuring surveillance equipment, as well as sung the song “Do You Hear the People Sing?”.

A number of demonstrators from the preceding night were believed to be held in the Kwai Chung police station. On the other hand, crowds gathered outside the Tin Shui Wai police station because of arrests that took place earlier that night of three young people. Conflicting reports claim that three got into an argument with an old man by the Tin Sau Rugby Pitch, or that they were picking up garbage, but that they were falsely of assault by two older men and arrested.

Particularly outraging of demonstrators, too, is that 44 of the 49 individuals arrested the previous night were to be charged with “rioting”, as well as one individual with charged with weapon possession. “Rioting” is a charge that carries penalties of up to ten years of jail time in Hong Kong. Few were detained in connection to triad attacks on demonstrators and, even of those that were detained, they do not face charges of comparable severity.

The majority of those arrested were students. Demonstrators could also face up to five years in jail under charges of holding an “unlawful gathering”, seeing as demonstrations on Saturday and Sunday took place despite that police refused to approve permits for them. 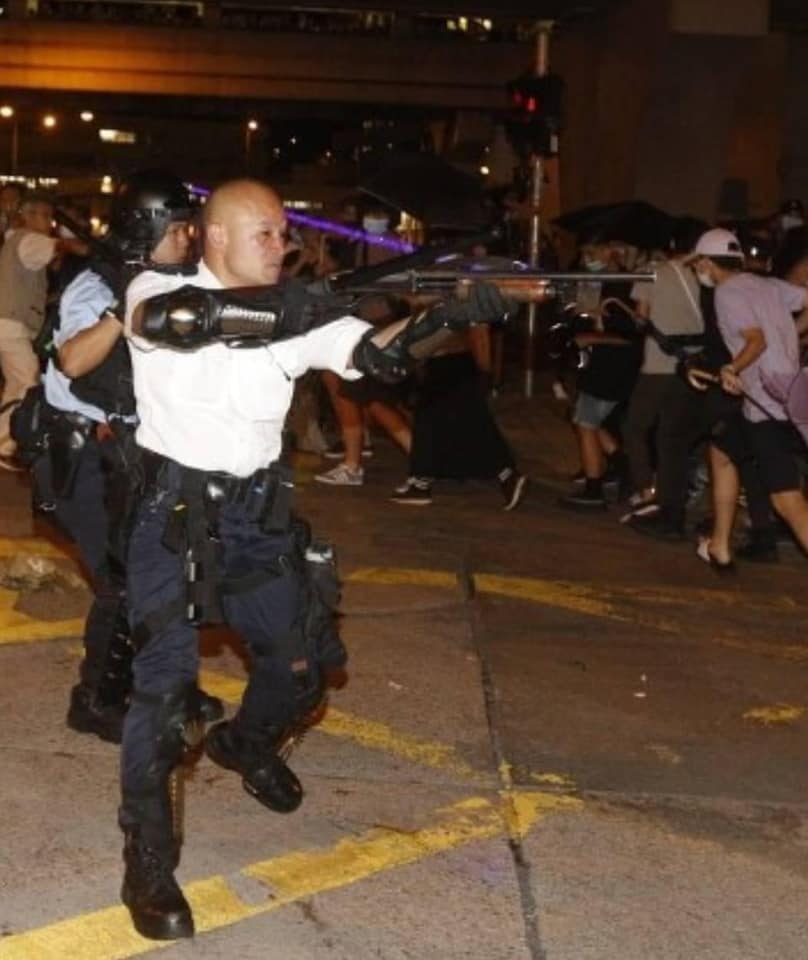 To this extent, strong reactions have also ensued after images and video showed a police officer pointing a shotgun at demonstrators at close enough of a range that even non-lethal rounds would potentially be fatal. The South China Morning Post later reported that the gun was loaded with beanbag rounds.

At 2 AM, demonstrators being held in the Kwai Chung police station were released on bail. However, at 2:45 AM, a car driving by the Tim Shui Wai police station began to shoot fireworks at the hundreds of demonstrators gathered outside. At least ten were injured. Police did not make any arrests and the identity of who shot the fireworks remains unknown. Video footage from multiple angles clearly shows the license plate of the car, with individuals that appeared to be members who had appeared earlier in the night being the most likely suspects.

The attack on demonstrators has been seen as a further sign of the deteriorating situation in Hong Kong, in which demonstrators face assault not only from the police but from pro-Beijing triad members and gangsters. That being said, it is also a sign of how digitally-savvy demonstrators are that the license plate of the car was rapidly identified from dashcam and cell phone footage within a very short time. It remains to be seen if police will follow up and arrest the driver of the car or if police, who are accused of colluding with triad members and have been filmed interacting in a friendly manner with suspected triad members, will attempt to let them off easy.

For perspective & for those who aren’t as familiar with Hong Kong’s geography, these are the three locations where protests have broken out spontaneously tonight, just a few hours after news broke of dozens charged with rioting for 28 July protests. https://t.co/yRD6saqyCT pic.twitter.com/CCXA9muIDl

But what may be most significant to note is the outbreak of three separate, unplanned demonstrations outside of police stations in completely different parts of Hong Kong at the same time. The distance between Kwai Chung, Sai Wan Ho, and Tin Shui Wai almost runs the entire length of Hong Kong from northwest to southeast.

Not only are demonstrations liable to happen with no prior advance in Hong Kong at this point, after eight weekends of continuous protest—but they can also break out in multiple localities at the same time—instead of being confined to one central area. Early demonstrations against the extradition bill were confined to Hong Kong island, but have since expanded to other parts of Hong Kong.

With protests having long since expanded beyond the original demand that the extradition bill be repealed and toward broader demands for democracy, another significant demand of demonstrators is that charges of “rioting” be cleared from participants in the demonstration. This demand is central enough to the movement that it could spontaneously mobilize the large numbers of demonstrators seen tonight.

Demonstrators, too, demand an inquiry into the police violence which has taken place during protests so far, a demand that the Lam administration remains unwilling to acquiesce to. With the Hong Kong and Macau Affairs Office stating in a press conference yesterday that it continues to support the Lam administration taking action to arrest “violent” demonstrators, it is more than likely that China and its proxies in the Hong Kong government will continue to shrug off the demands of demonstrators.

To this extent, with clashes between Chinese demonstrators and Hong Kongers taking place by of “Lennon Walls” constructed in support of the movement at the University of Auckland, some have taken the view that Chinese demonstrators were mobilized by the Chinese embassy in New Zealand. It is unclear if this is the case, but it is not impossible that attacks on the Lennon Walls which have sprung up globally will become an increasingly common phenomenon, whether from individuals mobilized by Chinese embassies or individuals that are simply nationalistic Chinese motivated to do so on their own. Similar events have taken place in the United States and Australia as well.

Just in: horrifying footage from Telegram shows fireworks being fired directly at pro-democracy protestors at Tin Shui Wai police station – believed to be from triads, who threatened people earlier today. The HK police can’t even protect citizens in front of police stations. pic.twitter.com/51vhbbyeyn

It is also possible that local politicians in locations where solidarity actions are being held could themselves carry out actions to repress solidarity actions. Taipei mayor Ko Wen-je would be one example, with the demolition of a Lennon Wall in Taipei by the city government after a mere two hours. This event occurred in a similar timeframe to the announcement of the establishment of the Hong Kong Outlanders, an organization composed of Taiwan-based Hong Kongers.

In the meantime, protests in Hong Kong are set to continue. Upcoming actions include a planned rally by civil servants on August 2nd—indicative of growing splits in the Hong Kong government itself—a march in Mong Kok on August 3rd, marches in Tseung Kwan O and west Hong Kong island on August 4th, and a general strike called for August 5th.

Although a general strike was called for in June at a point in which the anti-extradition bill movement seemed at a loss regarding how to escalate, it was not a general strike wide enough to force all of Hong Kong society to ground to a halt. With the escalation of demonstrations in the past two months, this general strike is likely to be larger.