Police Violence Against Protesters in Hong Kong Resumes Over Past Weekend

VIOLENT SCENES have taken place in Hong Kong in the last two days, with another spate of police violence against demonstrators. A brief spell of relative peace during the ongoing protests in Hong Kong is over, it seems.

On the heels of Friday’s “Hong Kong Way” protest action, which involved 210,000 Hong Kongers holding hands across Hong Kong Island, Kowloon, and the New Territories and during no clashes with police took place, a demonstration on Saturday night in Kwan Tong saw police violence.

Police fired tear gas and one protester was shot in the eye, drawing comparisons to a previous incident in which a female medic was shot in the eye, prompting much outrage. Tear gas canisters fired by police were found to have their dates of expiry scraped off, seeing as the Hong Kong police have previously been criticized for firing expired tear gas canisters at demonstrators because expired tear gas is more hazardous to the health of demonstrators than regular tear gas. 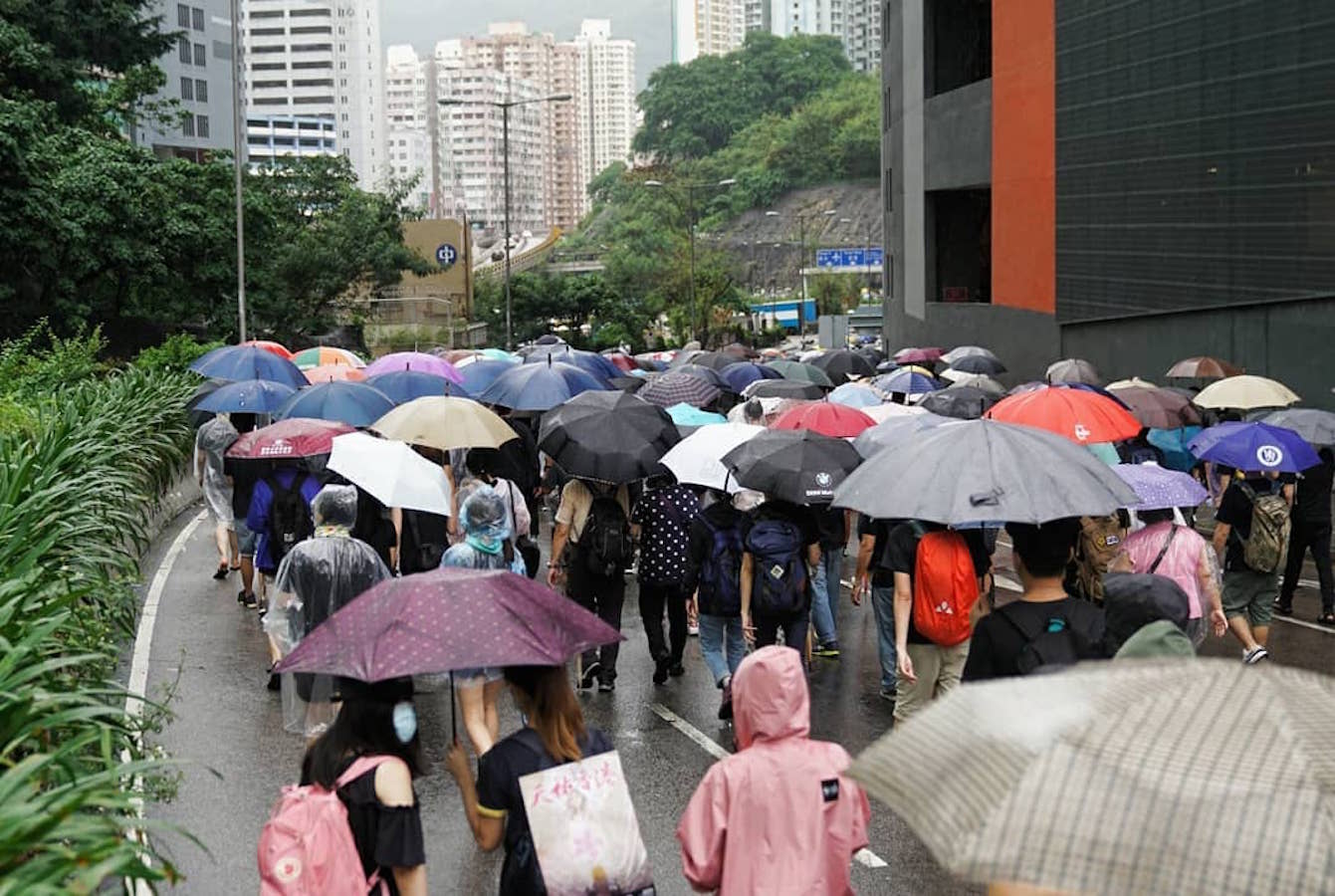 A march on Sunday from Kwai Chung to Tsuen Wan led to further clashes with police, with protesters dispersing and regrouping in other parts of Hong Kong as Wong Tai Sin, Tsim Sha Tsui, and Shum Shui Po. MTR stations including the Tsuen Wan, Tsuen Wan West and Kwai Fong stations were again closed ahead of the demonstrations.

During the march, demonstrators clashed with police using bamboo sticks and barriers. Demonstrators also besieged triad-owned establishments in the area, given much outrage after a knife attack by pro-Beijing triad members left one demonstrator permanently without sensation in his leg.

Video showing police drawing their pistols on demonstrators and firing a shot in the air. Film credit: SocREC/Facebook

But strong reactions have followed after police were filmed drawing their pistols on demonstrators yesterday. After this took place, a demonstrator is filmed pleading with police not to fire, following which police kicked the demonstrator in the face.

One police officer later fired a warning shot in the air. Although Chinese state-run media have attempted to claim that the incident shows restraint on the part of the Hong Kong police, the complete video of the incident seems to indicate that police aimed their weapons at demonstrators while retreating and fired a shot into the air because they were attempting to retrieve a pistol that they had dropped earlier.

Police are also believed to have arrested a twelve-year-old during the demonstration yesterday, likely one of the youngest individuals arrested during the demonstrations to date. Sporadic triad attacks, including incidents of knife-wielding individuals targeting journalists, have also been filmed in the last two days, although triad members did not identify themselves by wearing white, as with past occasions of triad attacks. Controversy over police actions earlier that night later led police to hold a press conference at 1:30 AM, an unusual move.

In the meantime, pressure is on the rise for demonstrations in Hong Kong. The Chinese government is generally believed to want the protests over before October, in order to avoid the international spectacle of demonstrations continuing in Hong Kong during the 70th-anniversary celebrations of the founding of the PRC. Splits also seem to be growing among Hong Kong political elites, with Hong Kong Chief Executive Carrie Lam urged to allow for an independent inquiry on police violence and withdraw the extradition bill by 19 high-ranking politicians but still refusing to do so. What comes next for demonstrations remains to be seen.