Ten Thousand Protest Against Nuclear Power, Visits by Tsai and Lai at Demonstration

WITH NUCLEAR ENERGY once again looming as an issue over elections next year, approximately ten thousand demonstrated against nuclear energy in Taipei today. A parallel demonstration was held in Kaohsiung at the same time. 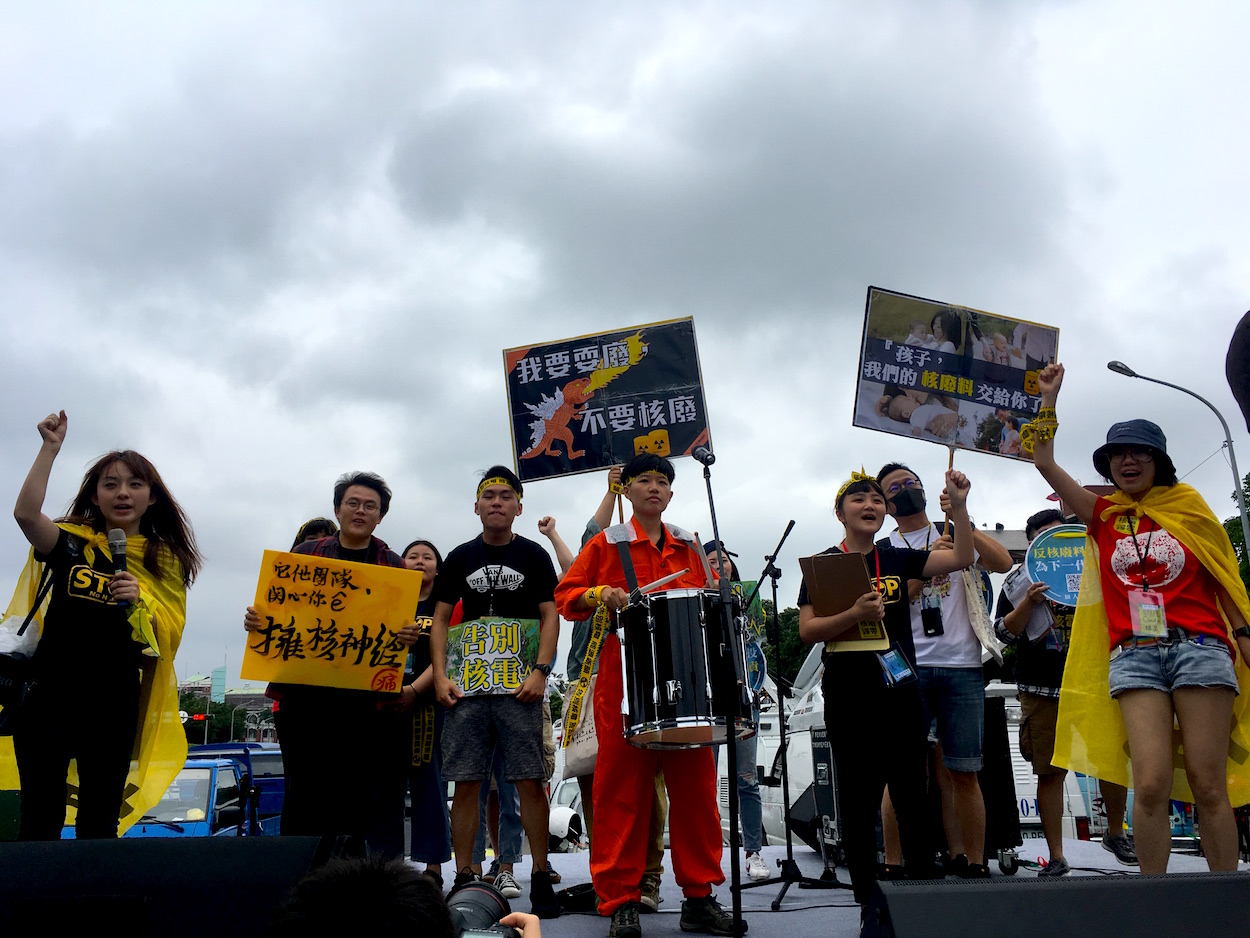 The Taipei demonstration today took place instead of the yearly anti-nuclear demonstration usually held on March 11th, in order to commemorate the 2011 Fukushima incident. The annual March 11th demonstration did not take place this year in the aftermath of nine-in-one elections last November, which saw two referendum questions pertaining to nuclear energy voted on by the Taiwanese voter electorate. Members of the Taiwanese voter electorate voted to remove legal provisions mandating that Taiwan be nuclear-free by 2025 yet against allowing food imports from areas of Japan affected by radiation from the Fukushima disaster.

Concerns have been further stoked because of calls by nuclear proponents to extend the operating permits for several reactors originally set to expire, such as reactors at the Guosheng Nuclear Power Plant in New Taipei City and the Ma-anshan Nuclear Power Plant in Pingtung, fears being that this would be dangerous given the age of these reactors. Nuclear proponents also intend to push for construction of the Gongsheng No. 4 Nuclear Reactor to be finished. The Gongsheng No. 4 Reactor has long been controversial in Taiwan because of concerns that its construction has been haphazard, using mixed parts, with the view that the Gongsheng No. 4 Reactor is particularly dangerous, even compared to other nuclear reactors in Taiwan. 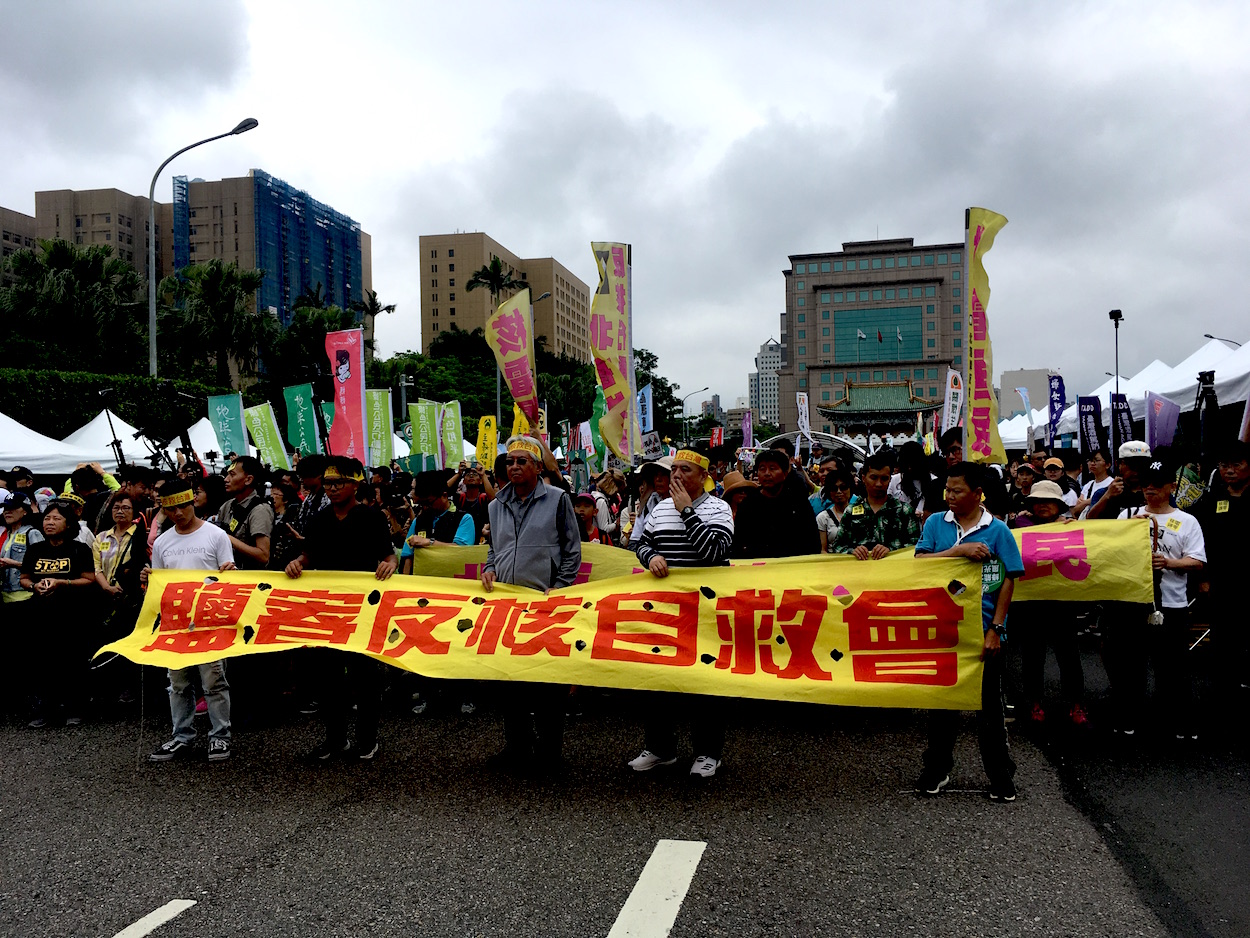 Nuclear energy has long proved a contentious issue in Taiwan because of Taiwan’s frequent seismic tremors and typhoons. This has led to concerns that Taiwan could see a nuclear disaster resembling the Fukushima incident in Japan, in which the Fukushima Daiichi nuclear reactor melted down due to damage caused by the 2011 Tohoku earthquake and typhoon. 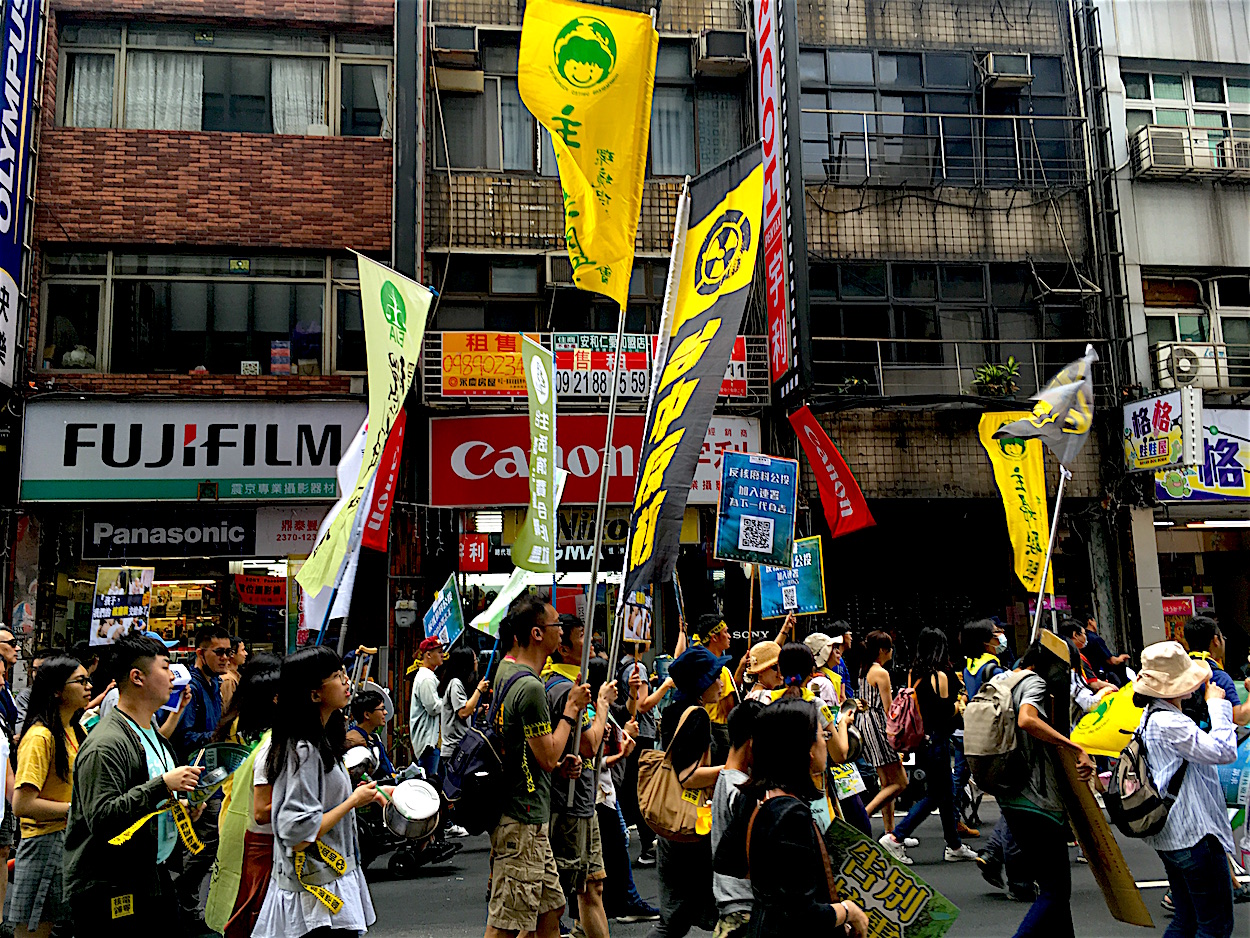 Participant groups included mainstay groups of Taiwanese environmental activism such as the Green Citizen Action Alliance, Citizens of the Earth, Taiwan. Many groups present do not directly focused on the issue of nuclear energy, including as the Covenants Watch, which monitors cross-straits trade agreements between Taiwan and China, Taiwan Against Drunk Driving, which focuses on combating issues regarding drunk driving, student activists opposed to the demolition of the Daguan Community, labor activists, and identity-focused groups as the Taiwan Society or People Rule Foundation. 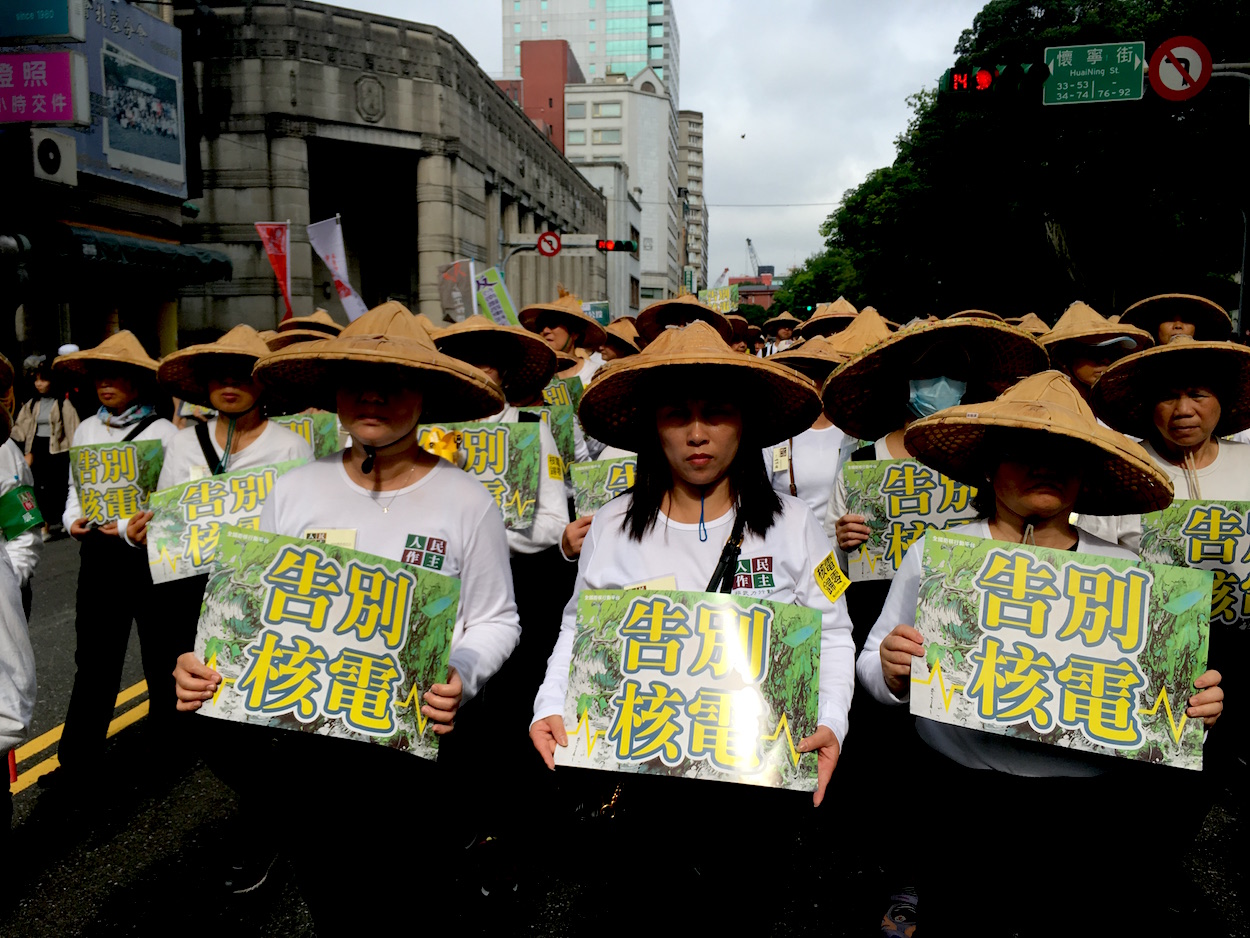 Namely, opposition to nuclear energy is broadly the consensus view of independence-leaning, progressive civil society organizations in Taiwan, whereas pro-nuclear groups slant toward the pan-Blue camp, with the current push for nuclear energy in Taiwan coming from organizations with direct links to deep Blues within the KMT.

Apart from participating in the demonstration itself, these groups set up stalls on Ketagalan Boulevard with materials about their organizations to distribute. An exhibit regarding anti-nuclear issues was also set up. The march itself was festive, with music, drumming, and slogans calling for “Breaking up with nuclear power” and embracing green energy. 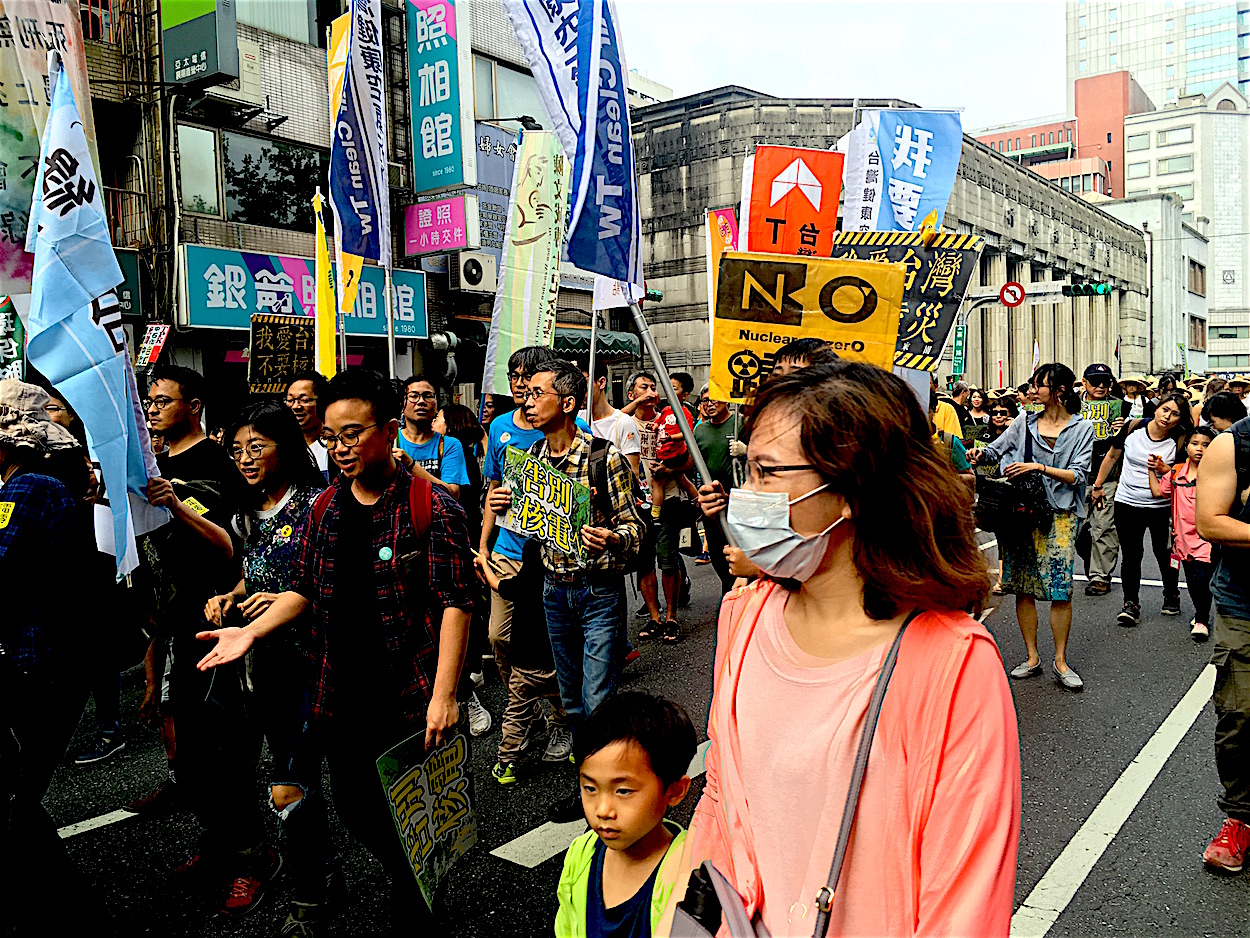 Third Force parties such as the New Power Party (NPP), Social Democratic Party (SDP), Taiwan Statebuilding Party (also known as the Radical Party), Free Taiwan Party, and Trees Party, were also present. Notably, politicians of these parties present came from all over Taiwan for the event. At the end of the march, politicians from these parties gave speeches.

Significantly, a number of DPP politicians were also present. Current president Tsai Ing-wen and former premier and Tainan mayor William Lai, who are currently contending each other for the DPP’s presidential nomination in 2020 elections, made appearances at the demonstration. Tsai had announced her visit ahead of time, something which led to strong reactions from KMT-affiliated pro-nuclear activists. More surprising was a visit by Lai, who like Tsai also probably hoped to appeal to youth activists in making an appearance at the demonstration, and likely did not wish to be out-staged by Tsai. 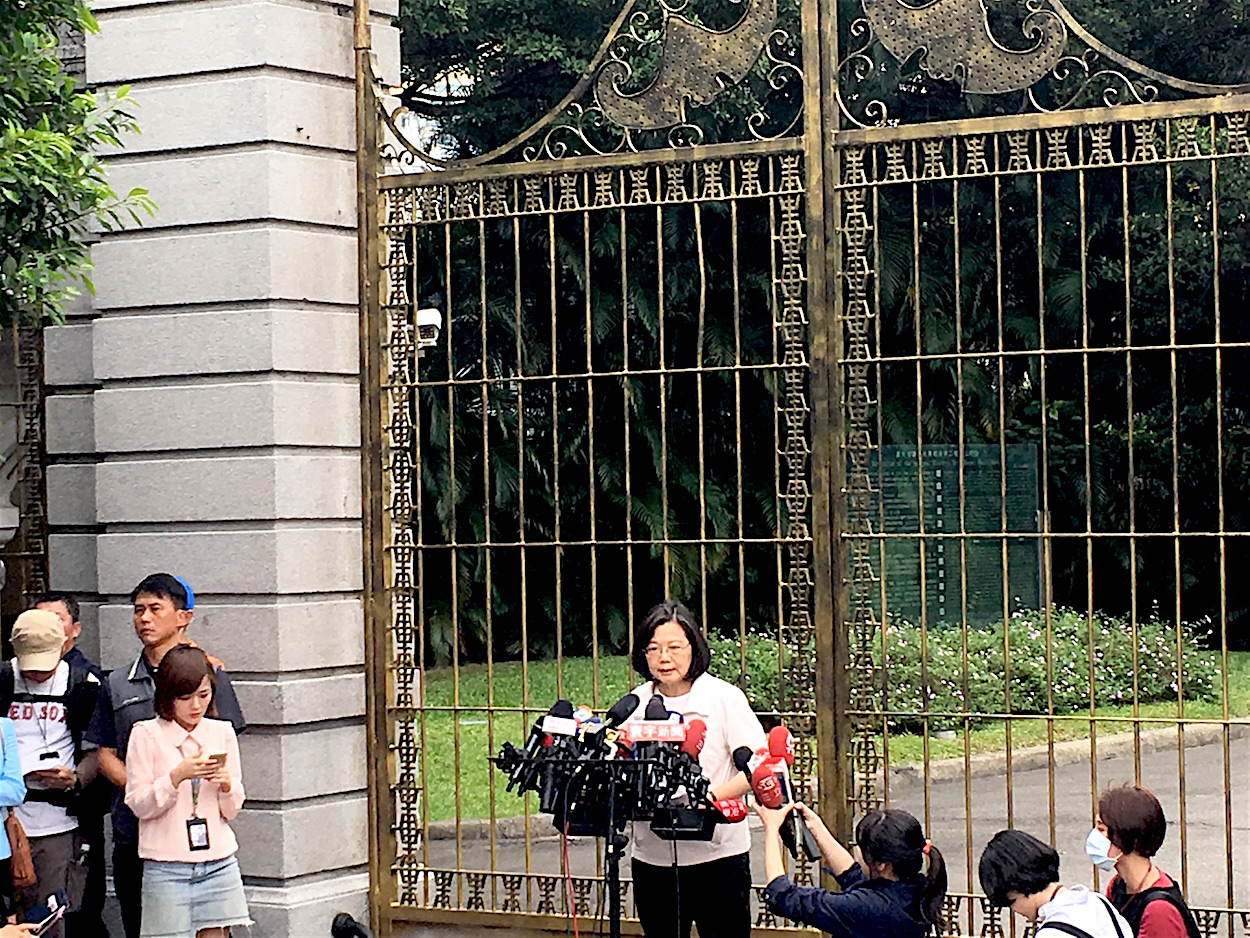 Tsai walked the length of the demonstration before holding a press conference reemphasizing her commitment to phasing out nuclear energy in Taiwan, whereas Lai made an appearance with other DPP politicians before making a speech. Tsai later joined the march when it began, although this caused some chaos within the demonstration because of police surrounding Tsai and reporters jostling to take photos of Tsai. Lai did not follow suit. Some later accused both of seeking to co-opt the demonstration for their electoral benefit. 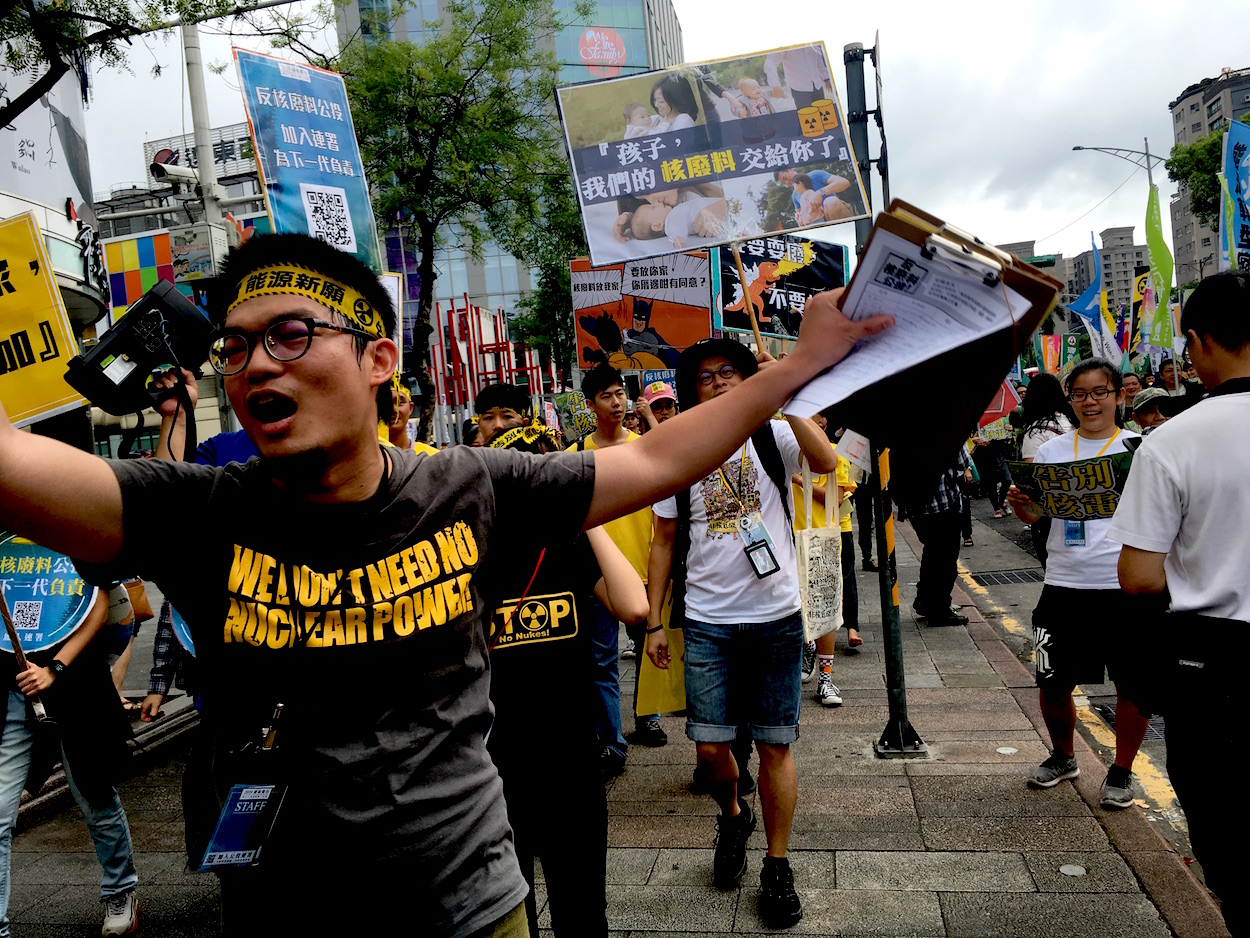 As such, it may not be surprising that Tsai and Lai were protested by some within the demonstration today, with some shouting slogans at them or holding up banners, only to be forcibly pushed away by police. This was not only with regard to demands that Taiwan phase out nuclear energy, but also criticisms of Tsai and Lai for allowing the Daguan eviction to take place under their watch.

More generally, it is to be seen what the next steps for Taiwan’s anti-nuclear movement will be. One observes an increase in participation in the demonstration this year, probably as a reaction to the results of the referendum last year. Yet anti-nuclear advocates themselves call for another referendum against nuclear energy to be held and, given the results of referendum voting last year, with plans to hold a referendum against nuclear energy and a referendum regarding nuclear waste disposal, it is to be seen whether this will be a successful strategy or one that results in another round of defeats for the anti-nuclear movement and progressive civil society writ large.