THE THIRD ANNUAL Women’s March was held today in Taipei, despite rain which fell for most of the afternoon. Approximately eighty to one hundred individuals were in attendance. The march was scheduled to coincide with International Women’s Day, which was yesterday. As a pun on the similarity between “Women” in English and “We” in Mandarin (“我們” or “women”), the march this year was 2019 WoMen (“我們節” or “Womenjie”).

This year’s march began at the Huashan Park, the former site of the 120 Grassroots artist commune, where a highly publicized murder case took place last year. The murder was one of a series of murders of women by men that took place in a similar timeframe, provoking strong social reactions at that time. The location of the march was in order to call attention to the issue of male violence against women, as a deep-rooted problem which usually is not widely discussed in Taiwanese society, inclusive of sexual assault, domestic violence, and other forms. 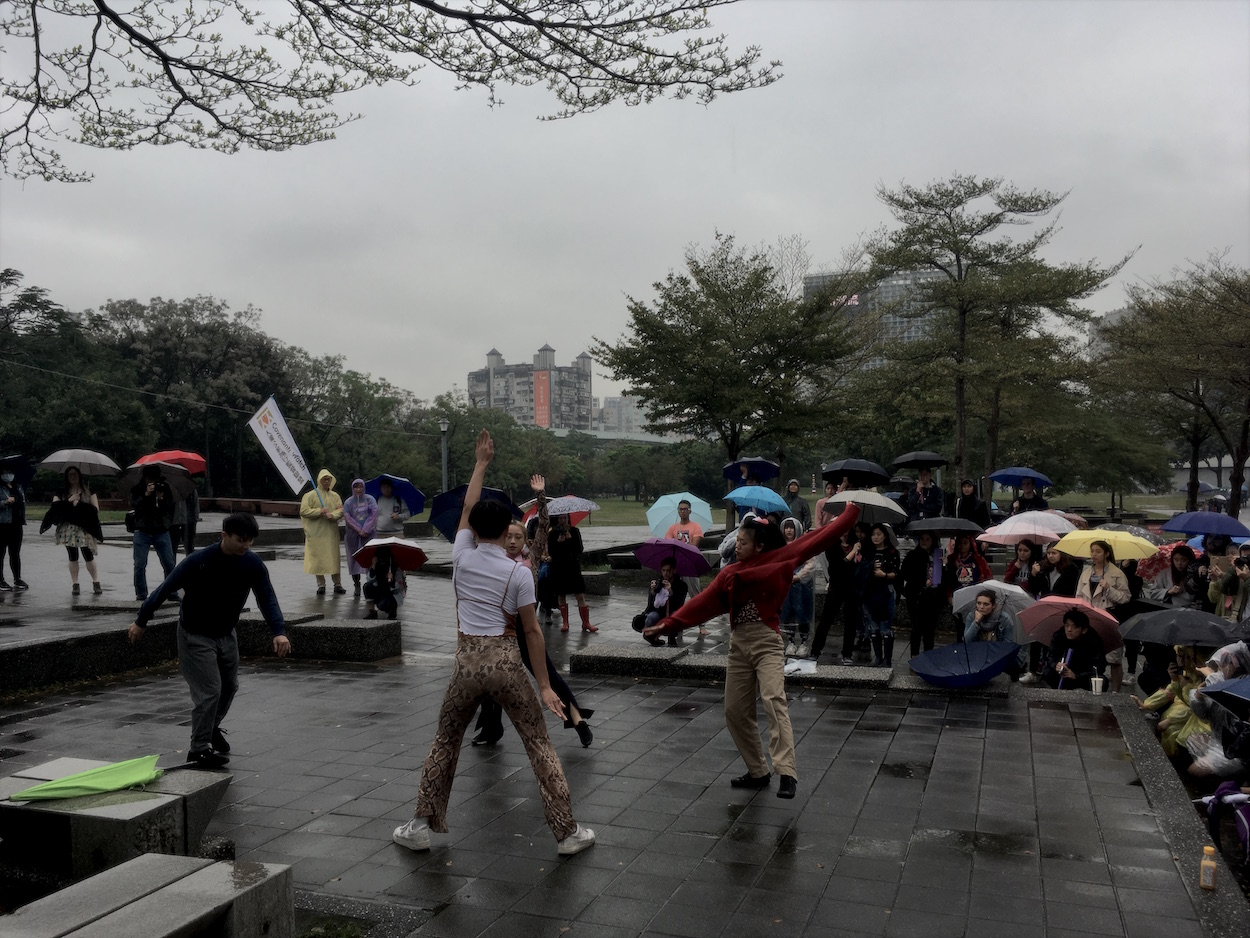 Subsequently, after a dance performance, the march proceeded south past the Legislative Yuan, towards Ketagalan Boulevard, and walked along the 228 Memorial Park towards Taipei Main Station before finishing at its final destination of Liberty Plaza.

Performances that took place at Liberty Plaza included Beauty Power Party, who performed a hip-hop song about views of female artists in the art world, and a makeshift ballroom session in which encouraged participants of the march to dance, organized by Fabulous Hornycorn. Other well-known figures of Taiwan’s drag queen community as Feilibing Ice Queen, Taipei Popcorn, Lady Anjelica MacDeath, and Queen Ultima were also in attendance. 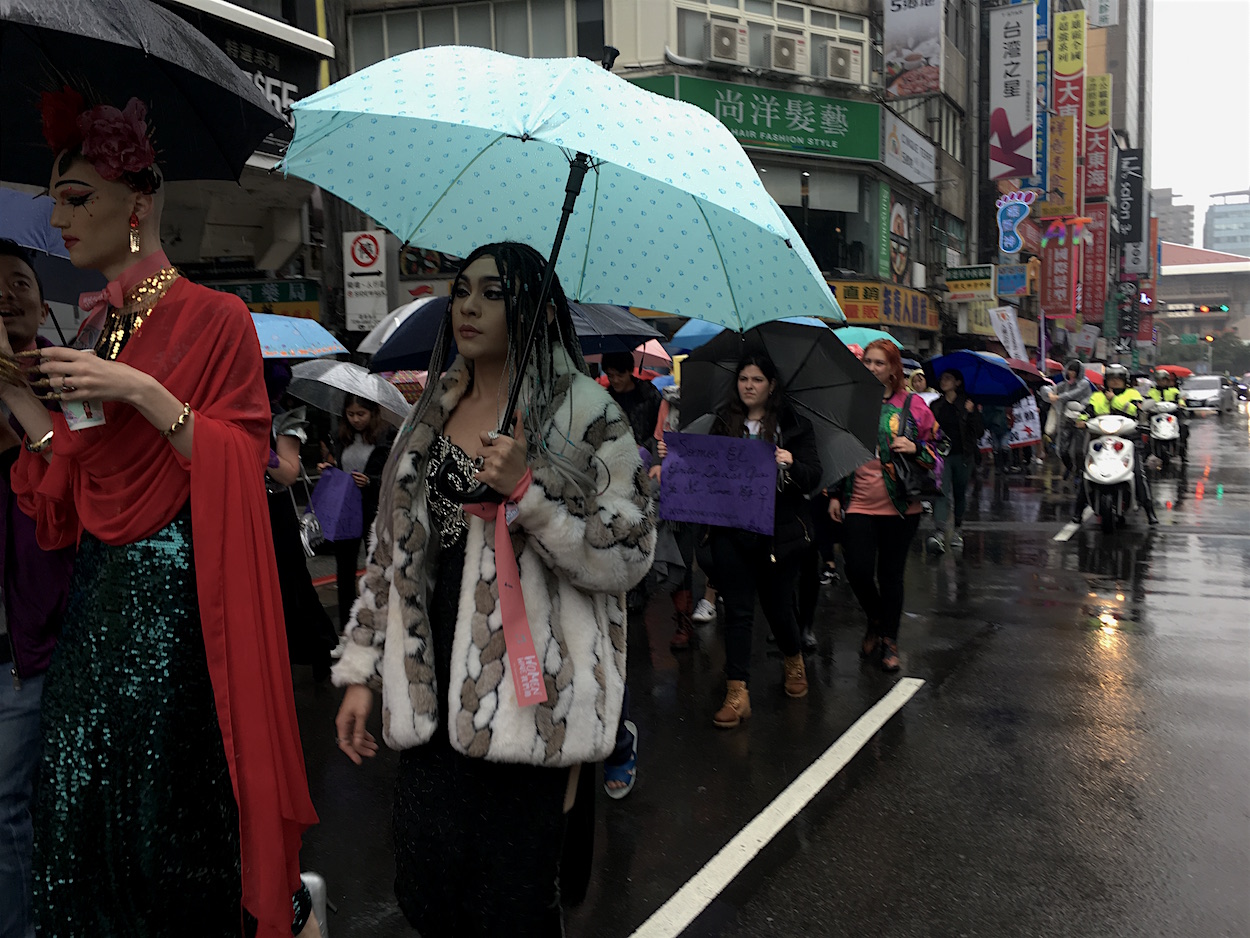 Civil society groups that participated were drawn from a number of backgrounds. This included the Chen Wen-cheng Memorial Foundation, which focuses primarily on raising historical awareness of the White Terror period, Covenants Watch, an NGO that monitors cross-straits agreements between Taiwan and China, as well as Humanistic Pastafarianism in Taiwan, UBI Taiwan, Taipei Women’s Rescue Foundation, and the International Socialist Forward. The Canadian Trade Office in Taiwan and Facebook sponsored the event as a whole. Campus-based student activist groups such as the University of Taipei Gender Workshop, NTU Feminism Club, NTHUSA Gender Equality, and the Fu Jen Catholic University Gender/Sexuality Workshop were also participants. 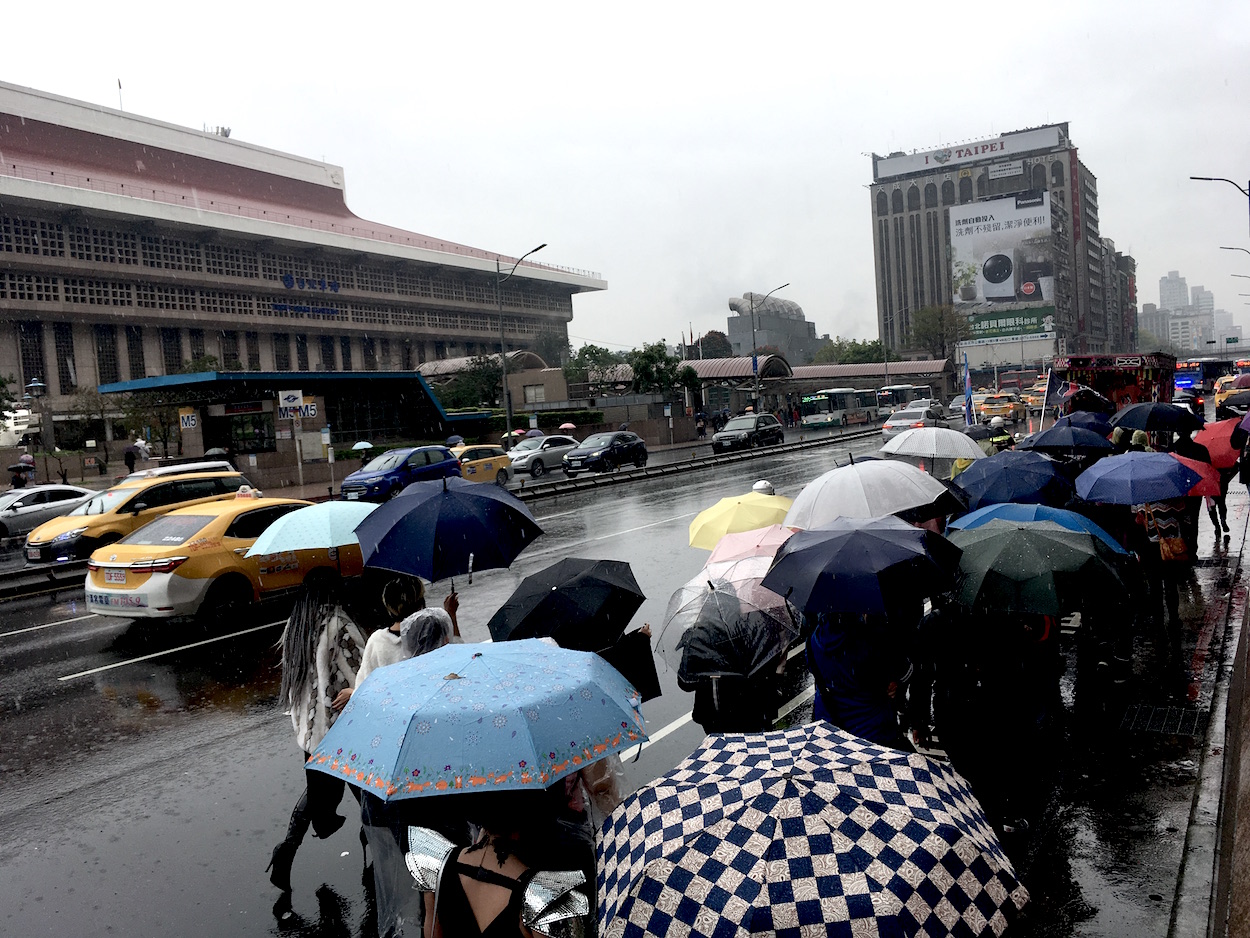 Speakers reflected on the many challenges facing women. This included body-shaming regarding weight, or the foisting of make-up and beauty products onto women through commercial advertising and exacting social standards that link women’s self-worth to their appearance, with statistics showing that American women spend more than 100,000 NT per year on beauty products.

Likewise, speakers also pointed to lower pay faced by women, discrimination in the workplace, and pervasive issues of sexual harassment in society as recently exposed through international social movements such as #MeToo. Other speakers also related the need to see discrimination faced by women as part of a broader series of oppressions, calling on women to organize and protest against such equalities in the form of street protests such as today’s demonstration. 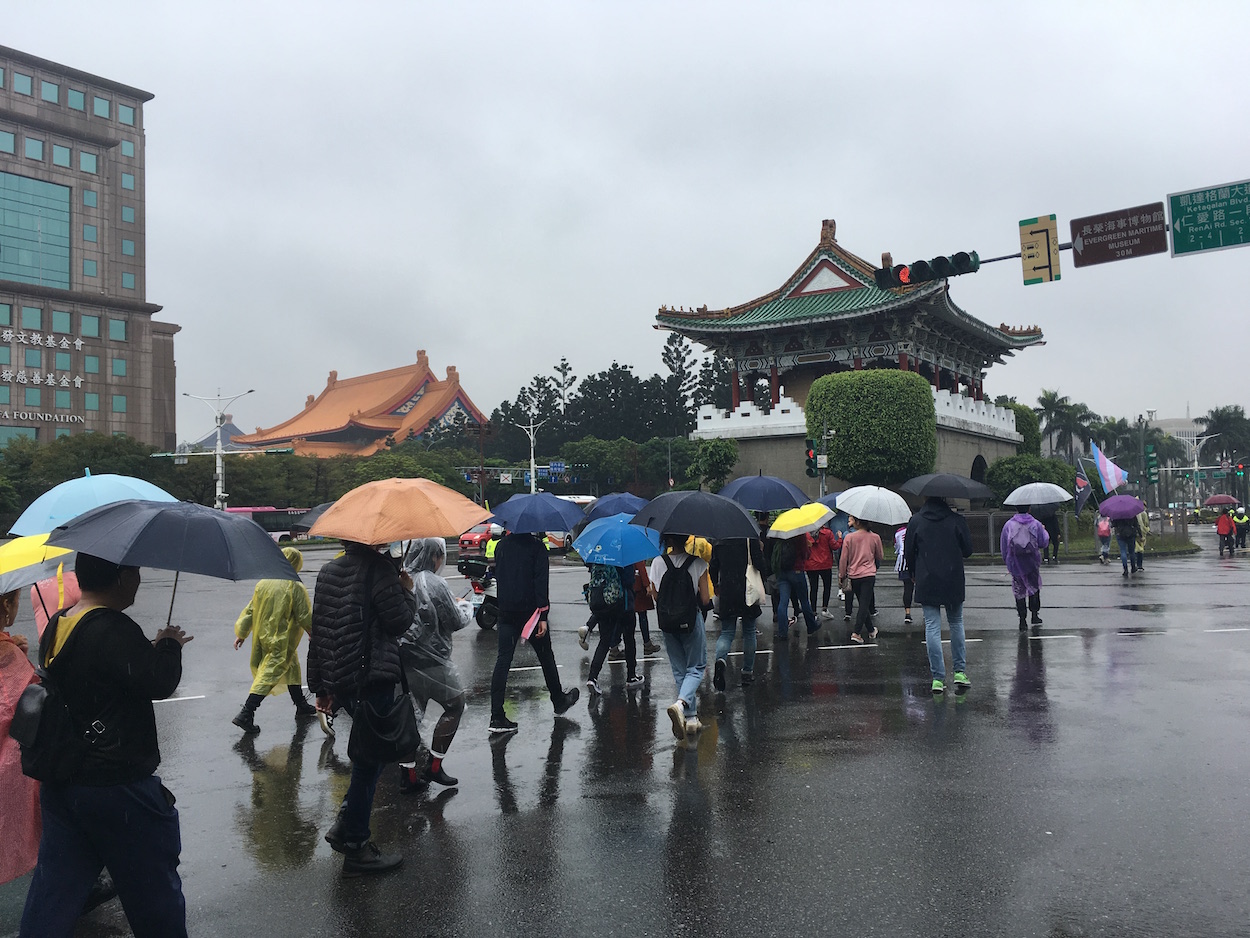 As with past years, those in attendance at the annual Women’s March were a combination of expats and Taiwanese. Organizing for the first Women’s March began three years ago in 2017 by American expats in Taipei as a response to the assault on women’s rights enacted by American president Donald Trump, in line with similar organizing that took place in the United States at the time. In the United States, this culminated in a march by hundreds of thousands of women on Washington DC on January 21st, 2017. In Taipei, the march did not focus specifically on Donald Trump, but events in the United States were clearly the impetus for the initial march.

Three years later in Taipei, however, momentum for organizing continues, with Women’s March Taiwan having formally established itself as a community organization alongside affiliated women’s organizations such as MOWES. As observed in the march starting at the Huashan Park, since its formation three years ago, Women’s March organizing in Taiwan has localized to also address issues facing women in Taiwan and the world. 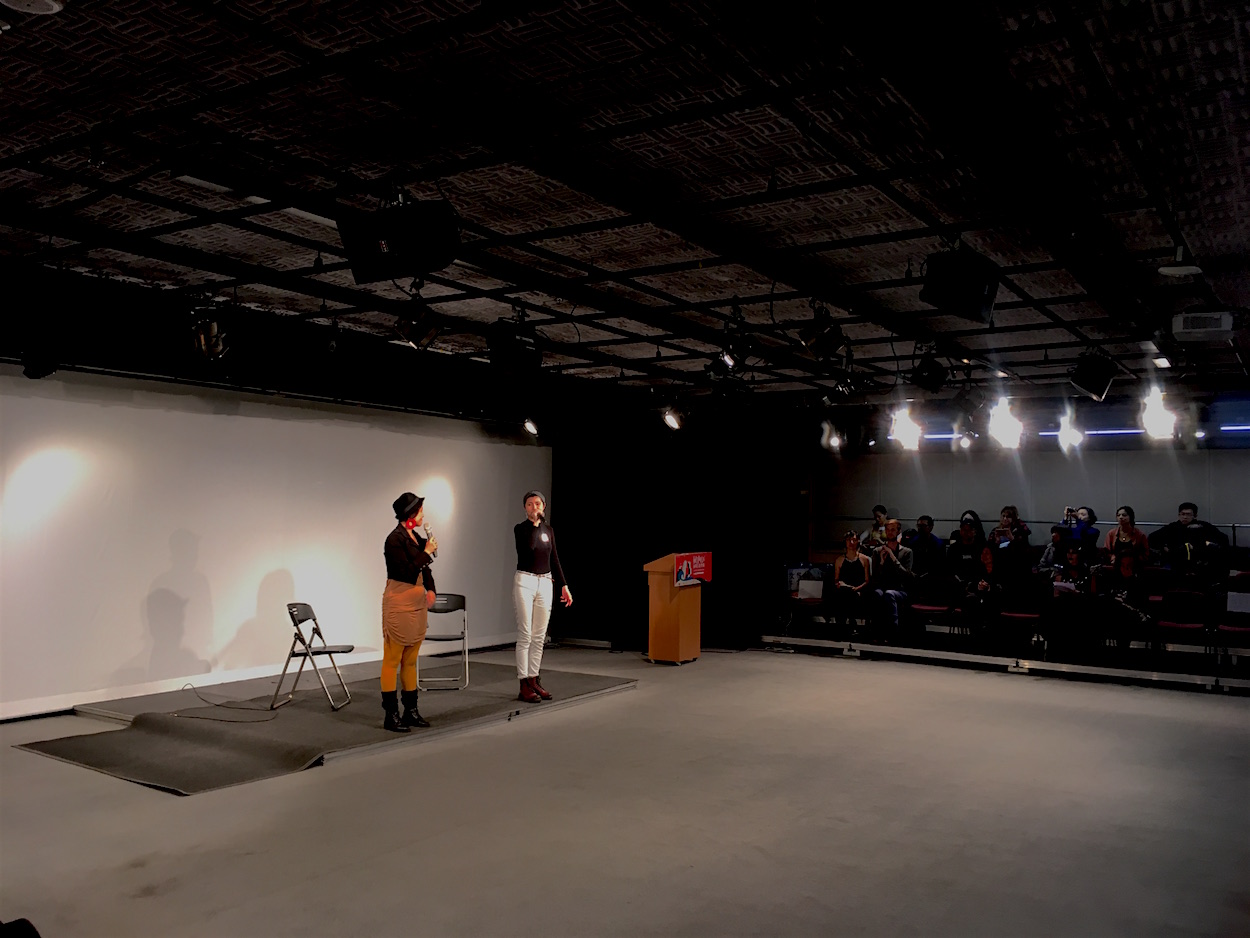 Past women’s marches have included participation from Taiwanese politicians as Yu Mei-nu, Jason Hsu, Miao Poya, sponsorship from local feminist publications such as Womany, and continuous participation from organizations such the Taipei Women’s Rescue Foundation, International Socialist Forward, and other groups. Between last year’s march and this year, one also observes a notable increase in the number of campus-based Taiwanese youth activist groups participating. One expects such organization to continue in the future, with Women’s March Taiwan having established itself as an annual event in Taipei.