A SMALL BUT spirited women’s march commemorating International Women’s Day took place today in Taipei, despite the cold weather and spells of light rain. The march began at the Chiang Kai-Shek Memorial, proceeding past Dongmen, and finishing at Daan Forest Park. The march was an outgrowth of expat organizing in Taiwan following the election of Donald Trump, out of concerns raised by Trump’s attack on women’s rights soon after taking the presidency.  This organizing eventually coalesced into the group Indivisible (Taiwan), which emphasizes that many members of the expat community in Taiwan do not approves of Donald Trump’s actions as American president, and does not identify with him as president of America. As such, the march is part of a global series of actions calling for an international women’s strike. 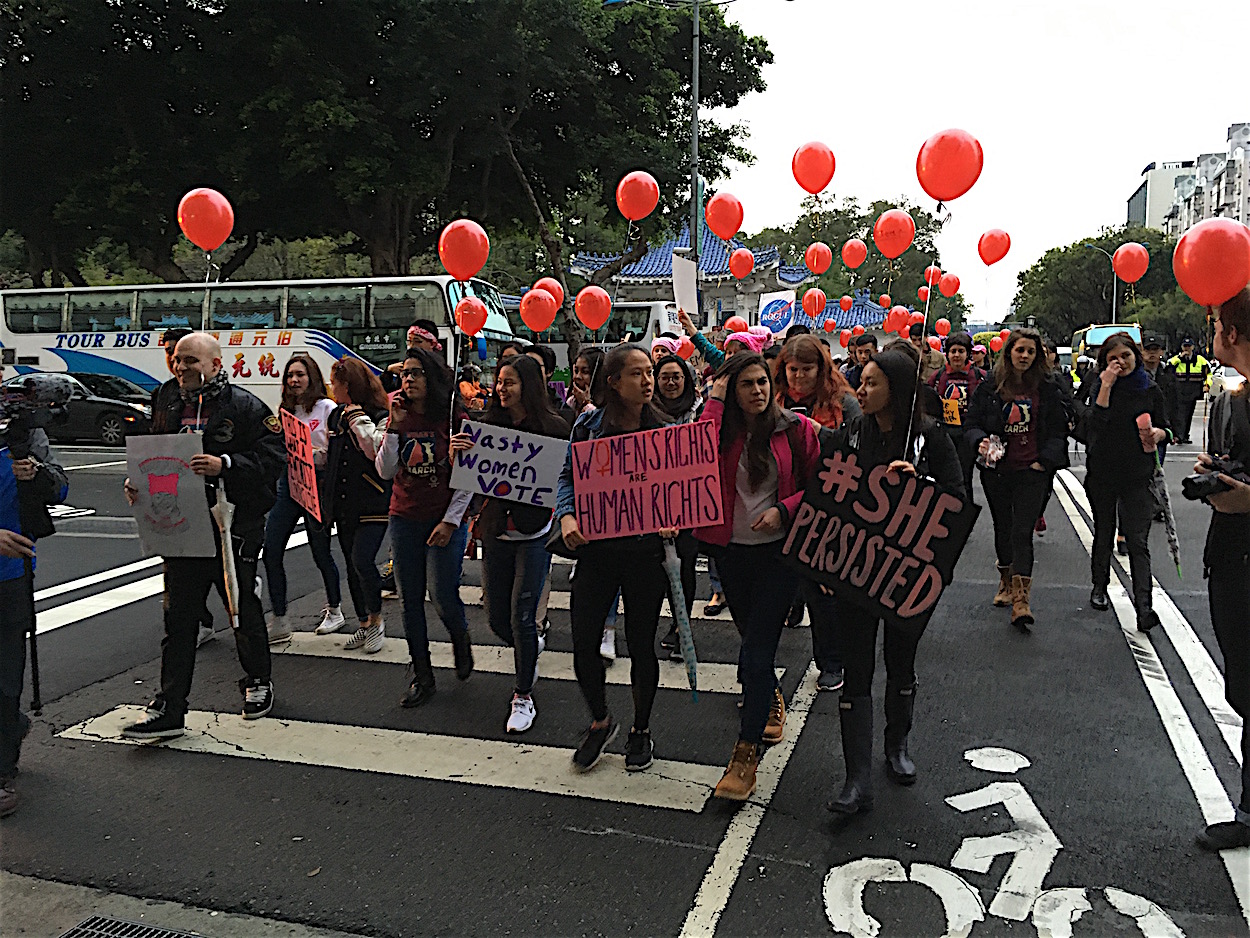 Approximately 80 people seem to have been in attendance. A number of journalists for English language publications were in attendance, but Taiwanese media largely does not appear to have been present. Although Donald Trump was not directly the target of the march, organizers called attention to that Taiwan, as with other places in the world, also faces issues of gender inequality. This occurs, for example, with unequal pay between men and women in the workplace, persistent social attitudes, violence again women, lack of marriage equality for members of the LGBTQ community, and other issues. Organizers in particular have emphasized that women’s rights are human rights and that the women’s march hopes to stand in solidarity with other causes, such as labor rights, disability rights, and immigrant rights, and environmental justice. Taiwan is sometimes hailed as a progressive society, seeing as it has a female president, but this is far from meaning that Taiwan has resolved problems of gender inequality.

Speakers at the event were legislators Yu Mei-Nu, Jason Hsu, and Karen Yu. Yu Mei-Nu and Karen Yu are members of the DPP and Jason Hsu a member of the KMT. These legislators have been among those Taiwanese legislators who have been active in campaigning for gender equality and same-sex marriage and so their participation is not particularly surprising, Yu Mei-Nu in particular standing out as the main force behind the push for realizing marriage equality in the DPP, and Jason Hsu going against much of his party in supporting gay marriage. Members of the Trees Party, a small third party which does not have any seats in legislature, were also in attendance. Other speakers were representatives of HeforShe Taiwan, Lean In, and other groups. 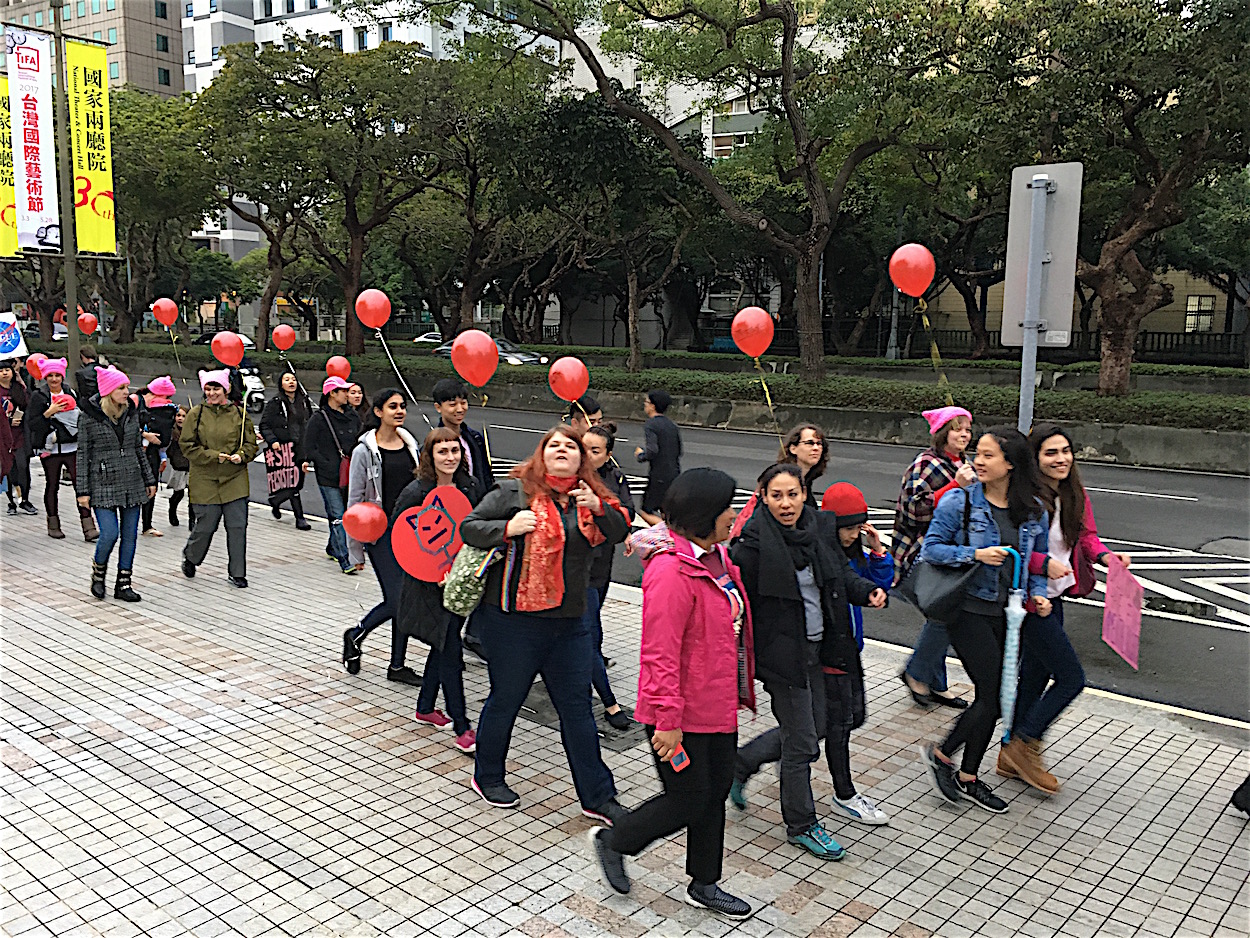 In particular, Yu Mei-Nu stressed in her comments that despite that Taiwan theoretically has gender equality in the law and seems to do quite well in international reports on the status of women in Taiwan, Taiwan still has a long way to go. According to Yu, women’s participation in the workforce is only about 50%, and income inequality remains a problem for women in the workplace. Likewise, it remains that conservative groups continue to push back against education about gender equality or LGBTQ issues within school curriculums. Jason Hsu also stressed in his comments that, despite being in a conservative political camp, it is not impossible to push for liberal values, hence the importance of taking the initiative and not being able to rock the boat on critical political issues. Hsu also stressed that this was a way to raise Taiwan’s international profile and that he remains firm in his belief that Taiwan can be the first country to legalize gay marriage in Asia.

As reflective of the march’s origins in expat organizing, a large proportion of the participants were expats, although the march was a mixture of expats and Taiwanese. It also need be remembered that it was a mixture of Taiwanese and expats that planned the march and that the march was co-sponsored by the Taiwanese feminist publication Womany, which provided the t-shirts worn by many of the participants . But that commemorations of International Women’s Day are not larger in Taiwan is probably reflective of to what extent global efforts calling for an international women’s strike are tied to organizing in America and have spread outwards from America, and that commemorating International Women’s Day is not a regular event in Taiwan. 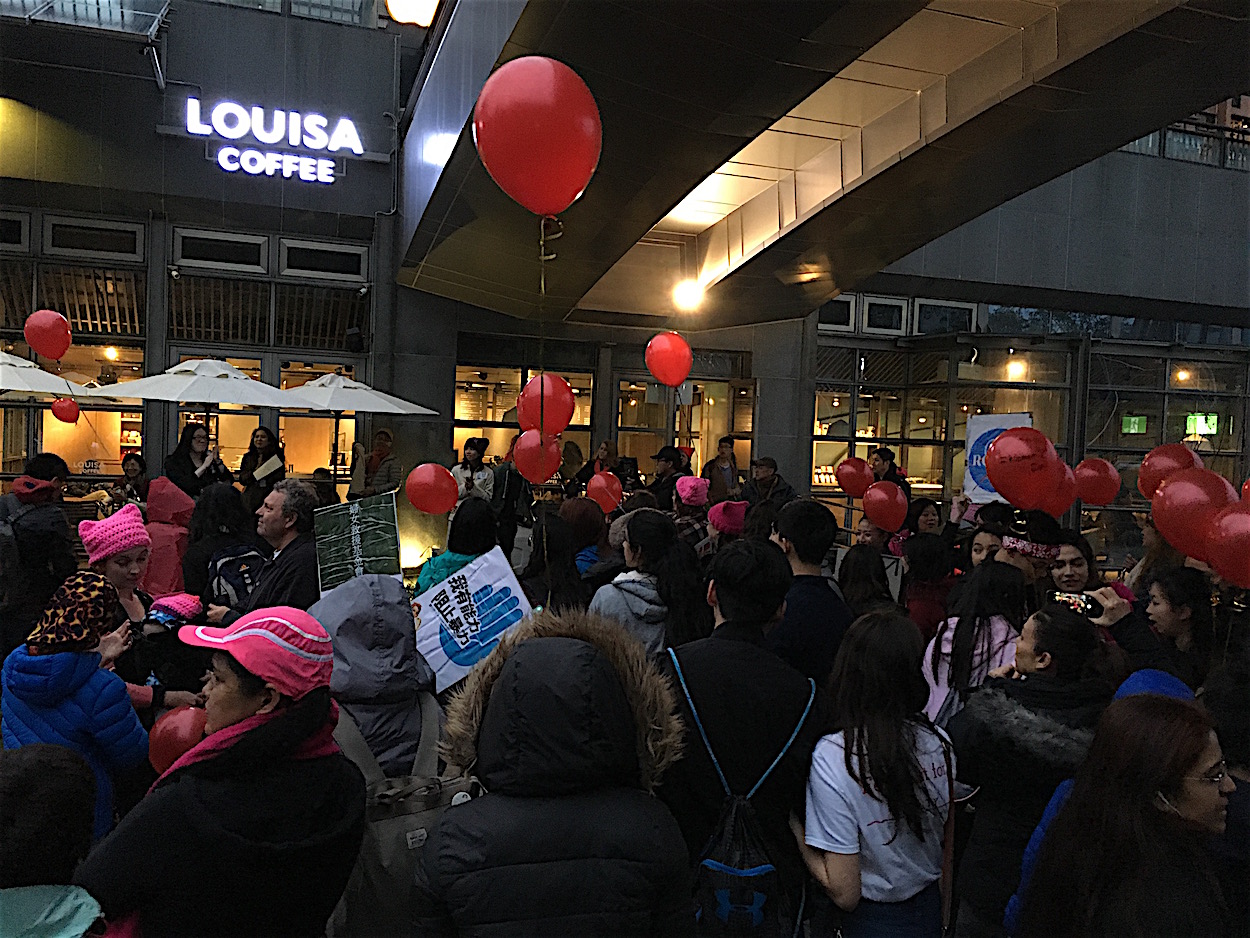 Indivisible (Taiwan) plans to continue organizing in the future and today’s march is the beginning of a monthlong campaign. It seems quite likely that, having been a success, the Women’s March will be the beginning of continued organizing in the future. The potentials for activism coordinated between expats and Taiwanese are many, but it remains to be seen how this can be used as leverage to push for gender equality in Taiwan, America, and the international community writ large.