INTERNATIONAL WOMEN’S DAY was commemorated as an indoor fair today, involving workshops and booths. This was the fourth commemoration of International Women’s Day in Taipei, which has primarily taken place in the past as a march. Past marches have sometimes involved a march followed by indoor speeches and performances.

The fair took place at the Canadian Trade Office in Taipei, on the sixth floor of the CitiBank in Xinyi Building. Participant groups included MOWES, which was the primary organizer of the event and invited the other groups, Women’s March Taiwan, Taiwan Women’s Health, the Modern Women’s Foundation, the Dr. Chen Wen-Chen Memorial Foundation, Meimeiwawa, Fu Jen University Feminine Week, and the National Taiwan University Feminist Club. 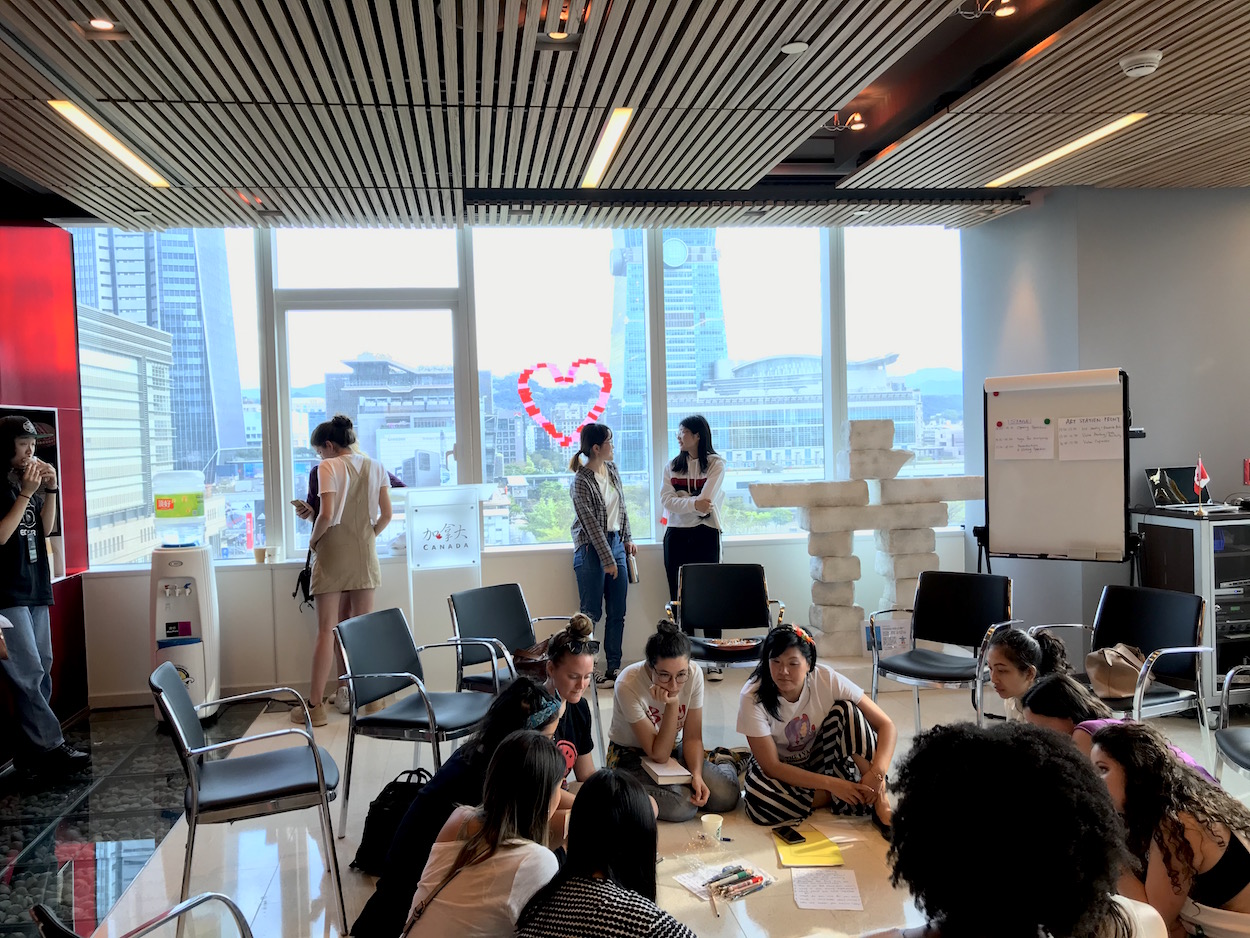 As with past years, a number of participants were expats. As also was the case in previous years, Taiwanese groups that participated include university groups—as Fu Jen University Feminine Week, and the National Taiwan University Feminist Club—as well as NGOs that may not be focused on causes directly connected to feminism or gender equality, but which are involved in a number of progressive causes, such as the Dr. Chen Wen-Chen Memorial Foundation, which focuses on efforts to realize transitional justice for Taiwan’s White Terror period.

Workshops covered a number of topics, including jewelry making, making period pads, painting as a form of self-expression about body positivity, disposable mask making, and yoga. As a form of interactive art, women anonymously shared experiences about body shaming and sexual harassment or assault, circling body parts in which they received such experiences on a diagram.

Drinks and refreshments were provided for free at the event, with alcoholic beverages sold for a small donation. T-shirts, tote bags, and zines were also sold. The zines sold were produced by MOWES, which is a community space for gender equality and women’s empowerment in Daan, and featured stories from thirteen Taipei residents about their life experiences, some taking the form of art, photography, poetry, or short essays. The idea to make a zine took place after a September 2019 reading of The Vagina Monologues.

Literature handed out by groups at the fair focused on a number of issues facing women, including but not limited to body shaming, experiences regarding sexual harassment and/or sexual assault, and assaults on abortion rights. In particular, one notes that right-wing conservative groups in Taiwan, influenced by similar discourse from conservative groups in the United States, currently aim to place restrictions on access to abortion in Taiwan. Such groups have been emboldened by successes in a November 2018 referendum, in which they were successful in voting down the legalization of gay marriage through revising the constitution—though the Tsai administration later legalized gay marriage through adding an additional clause to the constitution. 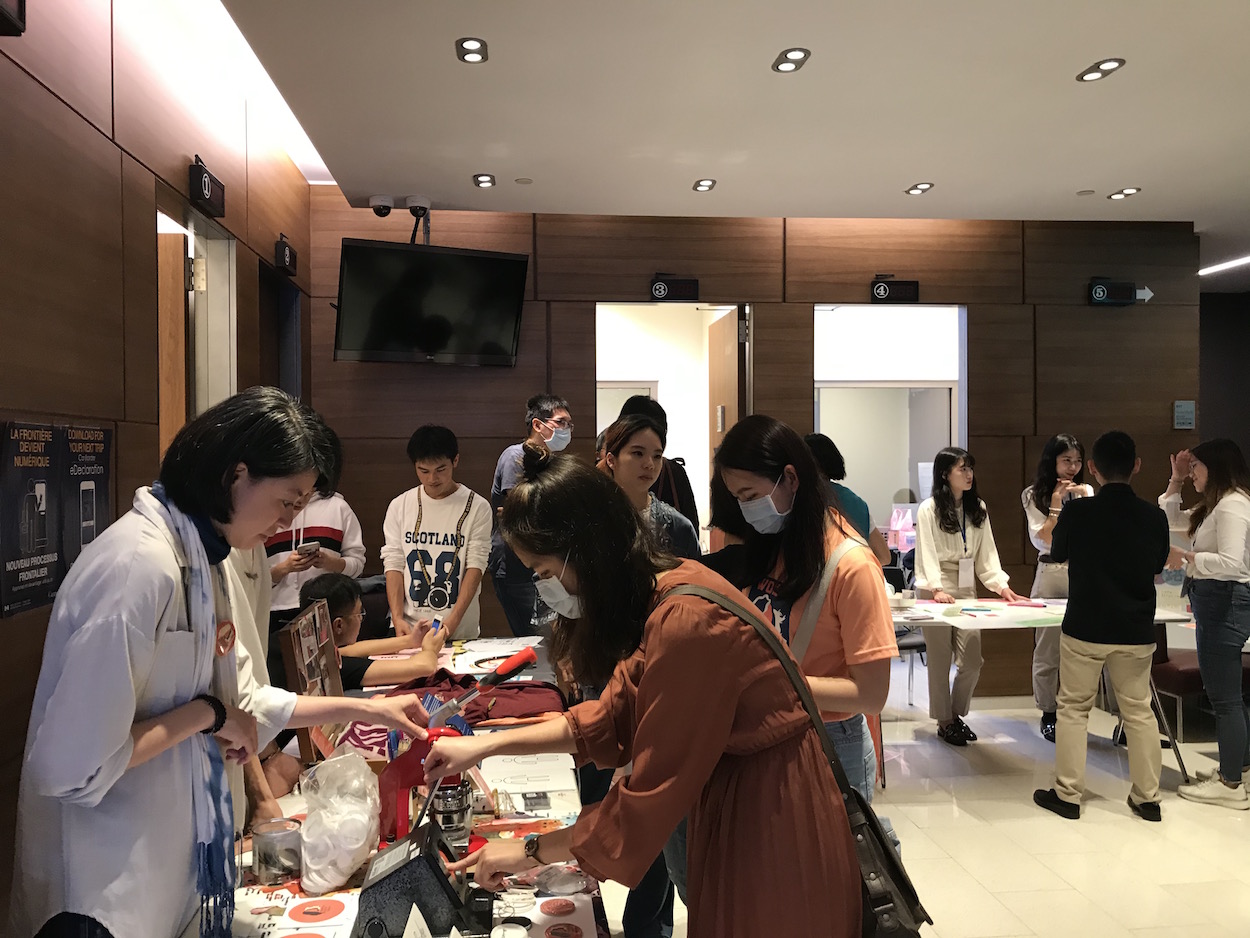 The first Women’s March in Taipei began in 2017. The march was an outgrowth of expat organizing in Taiwan following the election of American president Donald Trump, out of concerns raised by Trump’s attack on women’s rights soon after taking the presidency. Subsequent marches have taken up issues such as inequalities facing women in the workplace, sexism and victim-blaming in Taiwanese society, issues regarding domestic violence, and etc. The third Women’s March, which took place last year, began at the Huashan Park, the former site of the 120 Grassroots artistic commune, where a highly publicized murder took place in 2018, one of a series of murders of women by men in Taiwan at the time, and also spotlighted performances by members of Taipei’s drag queen community. The third Women’s March took place in a similar timeframe to the legalization of gay marriage in Taiwan. Commemorations of International Women’s Day including the Women’s March or today’s event in Taipei only began in the last several years.