Filibuster Of Labor Changes In Legislature, Outrage Over DPP Comments

OUTRAGE HAS ensued against the DPP’s compromise of its values with the passage of new changes to the Labor Standards Act, particularly following conflict between DPP legislators and Hsu Yung-ming of the NPP in the Legislative Yuan. Hsu filibustered the passage of the bill for eleven hours yesterday by raising a procedural objection and then refusing to vacate the speaker’s podium, finally being removed by DPP legislators around 8 PM.

Hsu justified his actions as meant to maintain oversight over changes to the Labor Standards Act, seeing as the DPP asserted that the amendment had passed its first reading on the floor of the Legislative Yuan and was due to be sent to the Social Welfare and Environmental Hygiene Committee. However, Hsu stated that committee reviews needed to be delayed until next Tuesday, as part of a necessary reconsideration period for the changes. 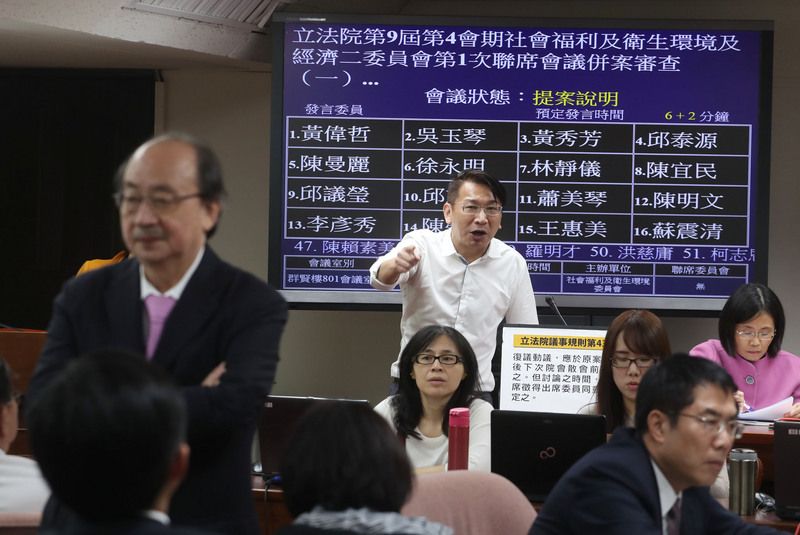 But while phrased in the language of maintaining procedural oversight, Hsu’s actions were likely meant to draw public attention to the wide sweeping changes that the bill will make to Taiwanese labor policy. These changes have been termed by experts as undoing thirty years of labor reforms in Taiwan, making it possible for employers to force workers to go to work with only eight hours between shifts, removing set days off per week and making it so that any rest days that workers have are “flexible” days in which they could still possibly called to work.

The amount of hours of overtime that workers can be made to work has also been increased to 138 hours over a three month period and new regulations that allow for the deferral of unused vacation days until a subsequent could possibly be used to ensure that workers could be made to indefinitely postpone vacation days. Likewise, these changes will not restore public holidays originally cut by the Tsai administration. These reforms take place in spite of that Taiwanese workers already work the fourth longest working hours in the world, according to the Ministry of Labor.

Changes to labor policy last year, specifically regarding confusion whether the Tsai administration would institute one set day off per week and one “flexible” day per week or two set days off per week, were already a major contributing factor to growing dissatisfaction with the Tsai administration. As such, it is hard to know how these new changes will not also be unpopular, particularly once put into effect.

However, the actions of the DPP in attempting to remove Hsu from the speaker’s podium have proven highly outraging for many. Throughout the day, Hsu was taunted by DPP legislators who accused him of attempting to make the DPP look bad or putting on a show for the netizens on the Internet, likely lashing out at the NPP’s younger, much more Internet-savvy support base. Comments by DPP legislator Chiu Yi-Ying in particular provoked outrage, with Chiu shouting at Hsu, “Your Sunflower movement has already collapsed!” (你們太陽花崩潰了). 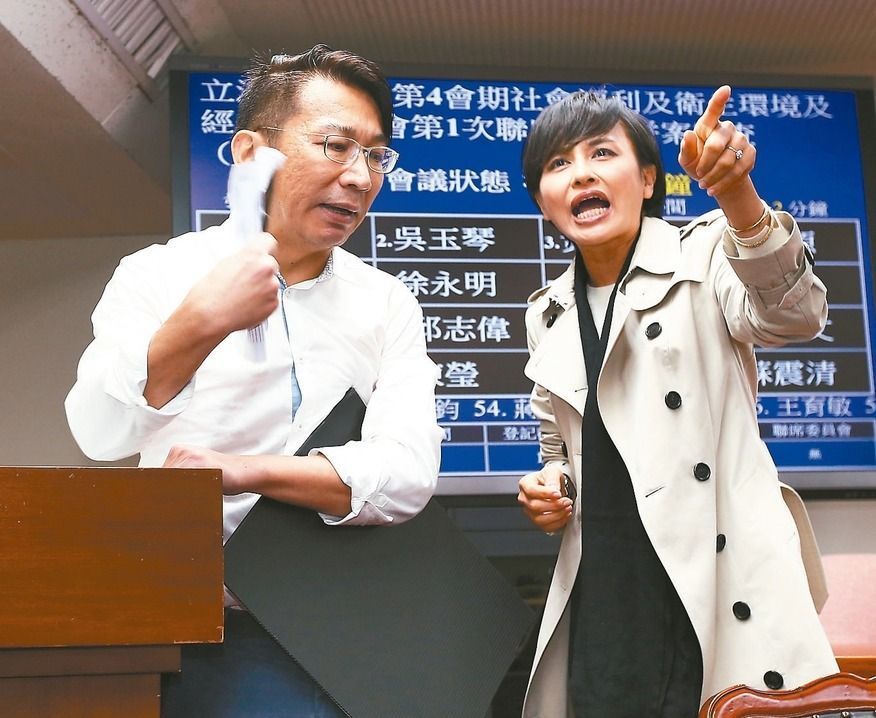 Such comments by Chiu later led to netizens digging up past statements by Chiu on social media in which Chiu praised the Sunflower Movement as “defending Taiwanese democracy.” In general, DPP outrage against the NPP, which has taken a stance against these changes to the Labor Standards Act, has demonstrated for many that while the DPP may have acted as if it embraced progressive politics in order to win the youth vote after the Sunflower Movement, which put youth participation in politics on center-stage in Taiwan, this was merely for the sake of elections and merely a means of DPP posturing.

We saw similarly in the past with DPP majority speaker Ker Chien-Ming accusing the NPP of secretly orchestrating or stirring up protests by labor unions against labor reforms last year, undemocratic sentiments at best. Indeed, with these labor reforms, this would generally be the DPP throwing Taiwanese labor to the wolves. Present labor reforms seem to have resulted from the fact that Taiwanese big business representatives felt that last year’s labor reforms compromised too much to labor, never mind that Taiwanese workers already work some of the longest hours in the world, which is why they would want to increase the amount of time that workers can be made to work.

Hsu’s filibuster has garnered a great deal of public attention, seeing as the NPP normally does not engage in a high number of filibuster tactics and reserves this as a tactic for drastic situation. The NPP likely hopes to avoid the spectacle of constant fights within the Legislative Yuan as the DPP is sometimes accused of engaging in, particularly seeing as the NPP emerged out of the Sunflower Movement and has among its members individuals previously involved in storming and occupying the Legislative Yuan for 23 days. Along those lines, this is probably why Hsu also justified his actions in terms of oversight, in line with the Sunflower Movement criticizing the “black box” means by the KMT attempted to force the CSSTA trade bill with China into law without sufficient oversight, declaring the bill to have been passed in 30 seconds, without review of the bill.

Protests by organized labor groups have also been ongoing, and members of Taiwan’s labor movement including the elderly Mao Chen-Fei, the former head of the Taoyuan Confederation of Labor Unions and a prominent member of Workers’ Struggle, are currently on hunger strike in order to demonstrate the passage of the bill. It may be that there is less press coverage of this hunger strike, however, because this is a tactic that Mao and other members of labor groups opposed changes by the Labor Standards Act have engaged in multiple times, leading to less attention paid to them by the media when they engage in a hunger strike or other drastic actions. Perhaps there is something tactically to be learned from this for Taiwanese labor groups. This occurs despite that the hunger strike has lasted for close to 300 hours. 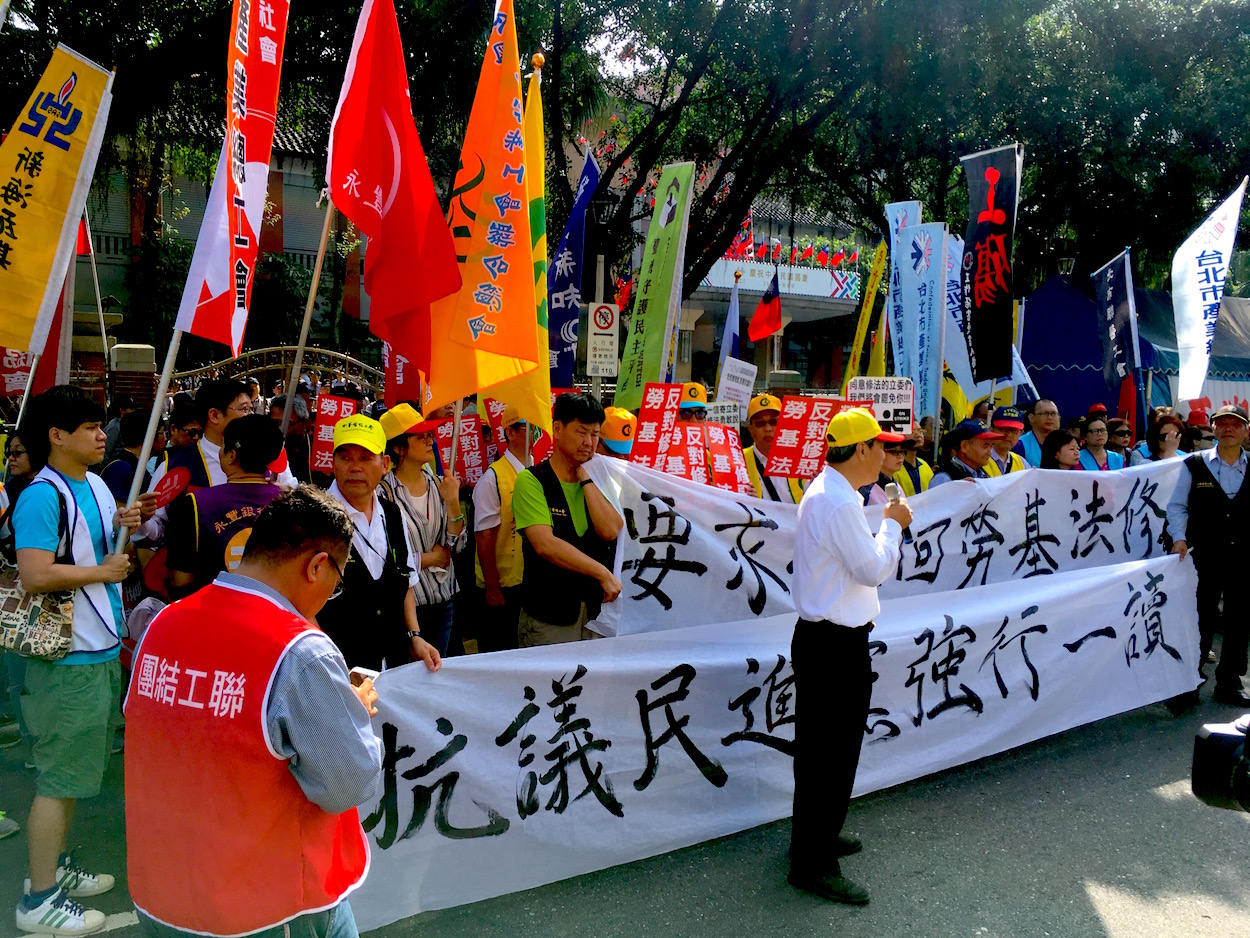 But it remains to be seen what measures can be taken to draw attention to the issue in the future, or to call for the DPP to reverse course. The Tsai administration seems set on forcing these new changes to the Labor Standards Act into law, as also observed last year when the Tsai administration proved willing to force its labor policy into law in a means accused of being similar to the KMT’s past forcing through of the CSSTA. It is possible, in fact, that the issue could lead to forms of direct action taken by labor organizers in the near future aimed at escalating the issue, or attempts to hold a mass mobilization of labor in the near future.