11 DOMESTIC CASES and one imported case were announced at the Central Epidemic Command Center’s daily press conference today. Six of these cases were already in quarantine. No deaths were announced.

Six cases were in New Taipei, four cases were in Taipei, and one case was in Chiayi. 89% of cases to date have been released from quarantine.

Chiayi is continuing to carry out testing in connection with the cluster announced there yesterday. The new case in Chiayi today was linked to the cluster, but was already listed as a contact and was already in quarantine. Although this case previously had a negative test result, they were tested again yesterday and found to be positive. This case had a travel history to Wanhua and returned to Chiayi for work on July 26th. Contact tracing is under way in Chiayi, with four sites for free testing set up and 671 tests. Though there were some cases of false positives, all turned out to be negative through PCR testing. 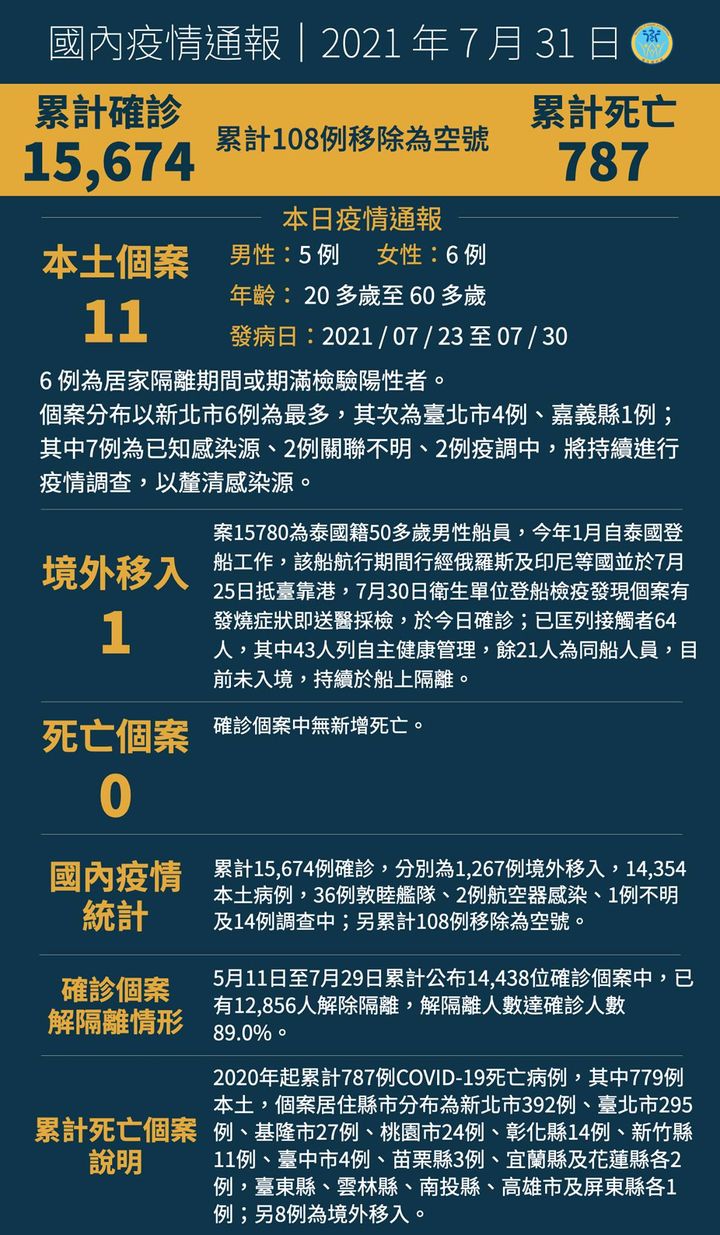 20,000 doses of AstraZeneca arrived in Taiwan this morning, from a vaccine donation by Lithuania. The donation arrived at Taoyuan International Airport at 10:34 AM. The vaccines can last until the end October and will undergo inspection for the next week. The CECC thanked Lithuania for its vaccine donation today.

Minister of Health and Welfare Chen Shih-chung brought up the Olympics, calling on individuals to stay at home and watch the Olympics. Chen stated that it was still better to avoid unnecessarily going out, despite the shift to level two alert status, that watching the Olympics can improve people’s moods, and that it is also a COVID prevention measure.

239,877 were vaccinated yesterday, bringing Taiwan to 32.82% coverage, which increases to 34.40% per 100 people. Vaccinations will continue even if supplies are getting low.

The CECC will discuss vaccination brand issues, likely regarding supply, with the Executive Yuan this afternoon. The results of this discussion will be announced tomorrow. Chen Shih-chung stated that there is no stock of vaccines currently globally, with vaccines sent out usually as soon as they are manufactured.

Keelung mayor Lin Yu-chang states that regardless of whether the CECC adopts a dual-track system or appointments on its online platform, Keelung will maintain a centralized list for individuals eligible for vaccination. Lin himself advocates a dual-track system. That is to say, this would involve a list of eligible groups for vaccination being used in parallel with an online registration system. Chen Shih-chung acknowledged today that the use of a dual-track system could be useful, but also stated that this may create confusion, and seemed to indicate that the CECC intends to continue with its current approach prioritizing the online registration for now, though it will provide assistance for special cases. 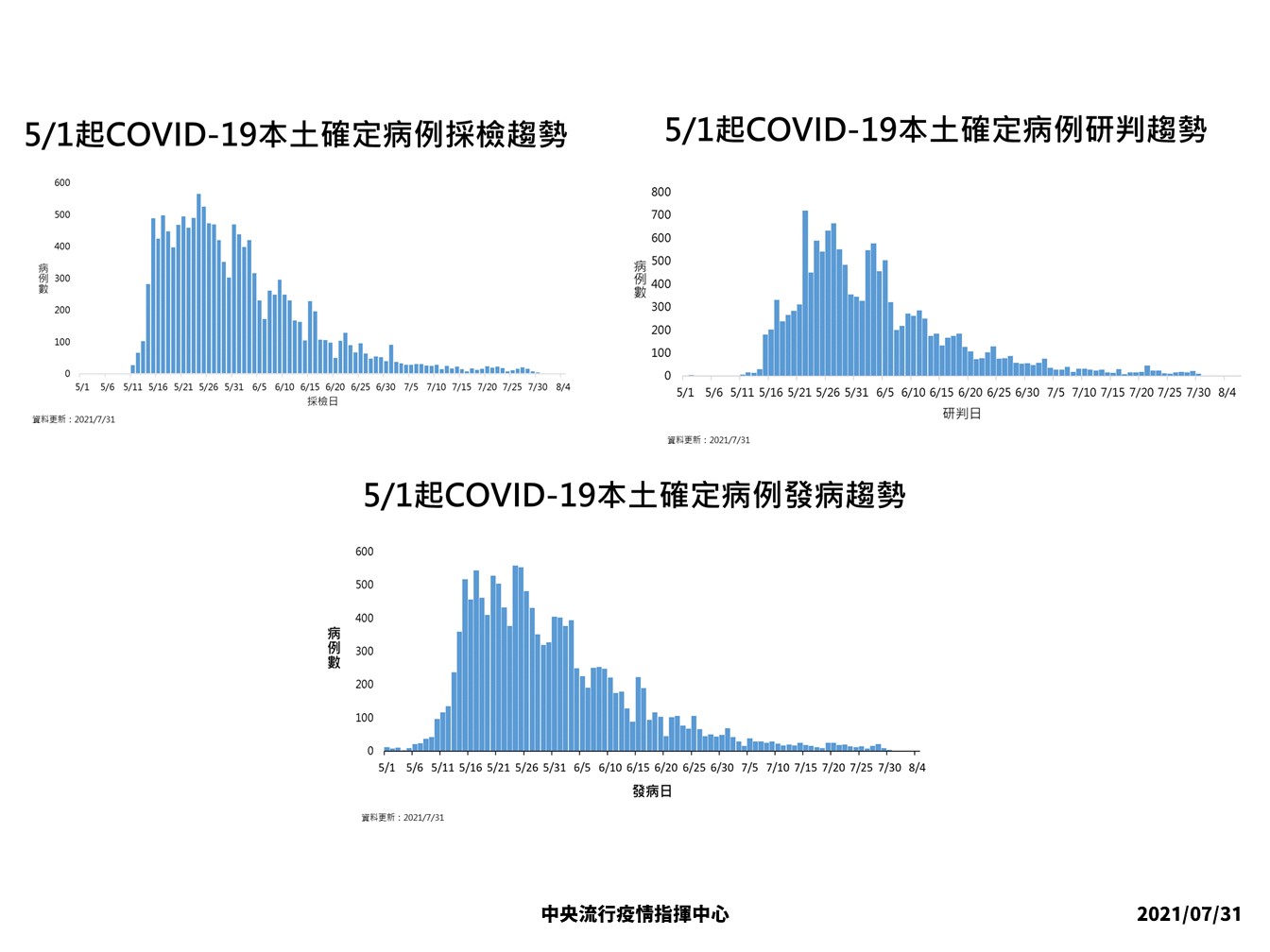 Hau Lung-bin of the KMT has filed a lawsuit to try and overturn the Emergency Use Authorization (EUA) for the domestically manufactured Medigen vaccine. When asked about this, Chen shrugged off the question, and stated that the CECC would abide by legal decisions.

Chen Shih-chung has received a death threat from a 26-year-old man, also surnamed Chen, threatening to kill him for lifting the level three alert on July 26th. The man has a history of death threats or threats of violence, including threatening to bomb the Taipei Metro.

Studies on mixing AstraZeneca and Moderna vaccines are underway at National Taiwan University. The study is run by the CECC and also involves trialing different intervals between vaccination.

With the KMT calling for direct deposit of cash instead of stimulus vouchers to be issued by the central government, a KMT-backed survey claims that the majority of the public supports this. The survey claimed that DPP supporters also backed cash deposits. Likewise, the KMT has lashed out claiming that the government cannot ensure adequate supply of Moderna for second-dose vaccination.

According to New Taipei mayor Hou You-yi, three of the six cases from today were found while in quarantine. Two cases were linked to Taipei. Traffic control is within the limits that New Taipei has set currently.

New Taipei is wary of a rebound if people rush outside with the relaxation of measures, as a result of which Hou stated that Taipei is still evaluating whether to allow for indoor dining or relax other measures, given this is the first weekend after level three has been lifted. Yet New Taipei will keep in mind that this weekend may not be a great index for whether people will go outside, given the rain. When asked about the issue of whether to use a dual-track system or to stick to the online system, New Taipei urged the CECC to listen to local voices and local governments.

According to Ko Wen-je, of the four cases today, they all had clear sources of infection, and were mostly found while in quarantine. Of 37 cases this week, only five had unclear sources of infection. Ko called on the public to evaluate the online crowd metrics to see if sightseeing areas are crowded or not, and to make reservations ahead of time if they hope to visit museums or other institutions.

Taipei’s standards for whether to allow for indoor dining are ten or fewer cases per day, two or fewer cases with unknown sources of infection, and three or fewer cluster infections. These numbers are based on what Taipei’s system can handle, with Ko stating that there is no real scientific basis for this, but this is based on practical considerations. Ko pointed to how the service sector comprises a significant number of jobs, in terms of Taiwan’s overall economy. 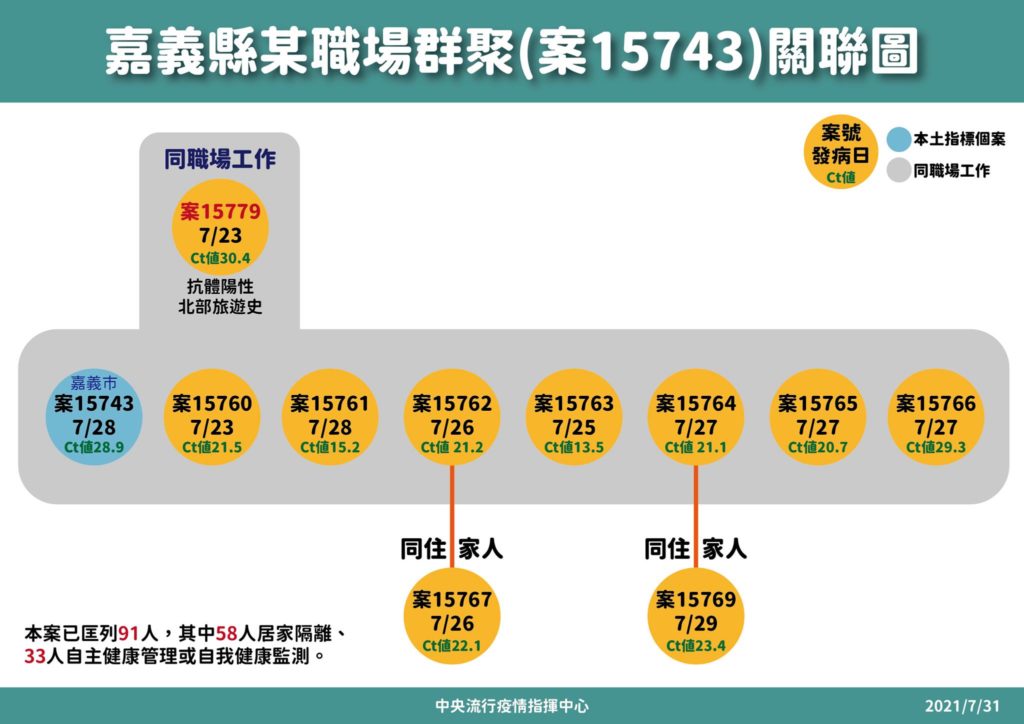 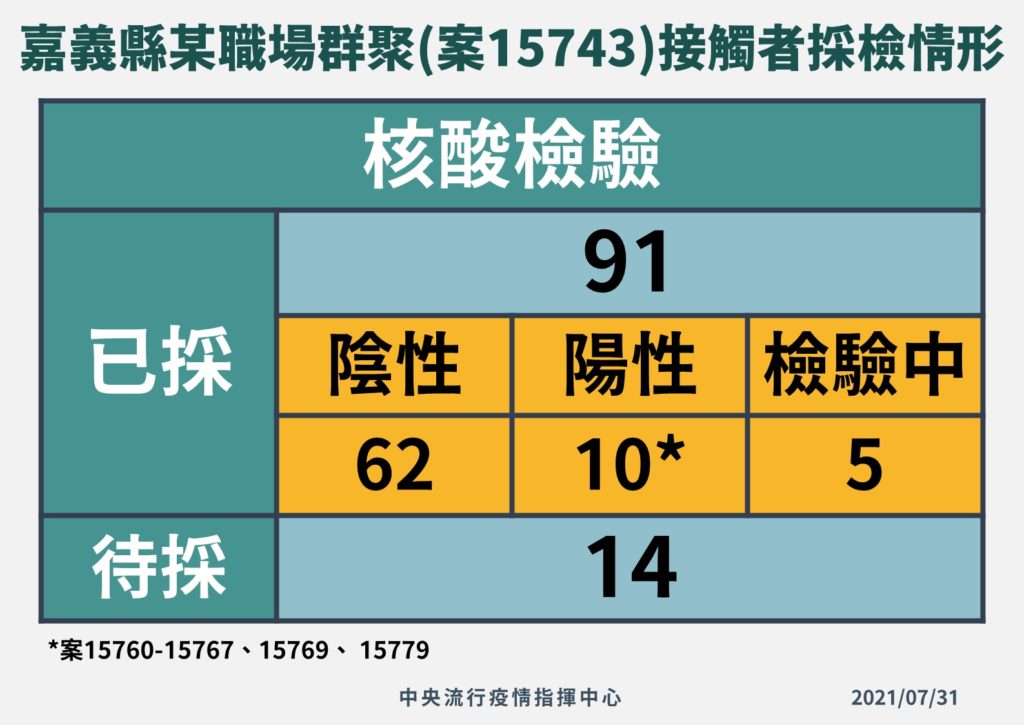 If things go smoothly, Taipei intends to announce on Monday whether indoor dining can be reopened on Tuesday. Ko commented that he announced this ahead of time so that restaurants have time to prepare for reopening. Ko does not rule out a last-minute change in the situation, but stated that if this takes place, there will be no more than 50 allowed indoors, and no more than 100 outdoors. Personal meals are prioritized, with calls not to allow sharing of meals using shared utensils. Workers should aim to be vaccinated or tested, or at least monitor health symptoms. If there are COVID-19 cases, work must be halted for three days for disinfection and there can only be takeout for 11 days.

According to Ko, Taipei will announce this in tandem with New Taipei, given the shared links between the two cities. However, New Taipei mayor Hou You-yi did not refer to this today during his press conference in any specific manner, raising the possibility that Hou may eventually break from his agreement with Ko on this. Ko stated that he’s aware of the economic effect of the outbreak on restaurants and that he was not aiming to get to zero cases before reopening. Nevertheless, one notes that just in the last few days Ko originally stated that a decision would be announced on Friday, then said he would announce on Sunday, and now claims he will announce on Monday.

Ko shrugged off criticisms of him from Jaw Shaw-kong of the KMT when asked by the press. To this extent, when asked about Hau Lung-bin’s lawsuit to try and overturn EUA for Medigen, Ko responded: “I think some people have watched Shaolin Soccer too many times. My answer is still: Shaolin Soccer”.