78 DOMESTIC CASES of COVID-19 and two imported cases were announced by the Central Epidemic Command Center at its daily press conference today. 13 deaths were also announced. 75.8% of cases to date have been released from quarantine, while 39 of the cases from today were already in quarantine.

Close to 2,000 people at the Fanggang and Shanyu Villages in Pingtung will be vaccinated in the next few days, with plans to vaccinate all villagers of the two villages, as approved by the CECC. This takes place admist the two villages reportedly maintaining “quasi-level four” alert status, with concerns because of low rates of vaccination in rural areas. 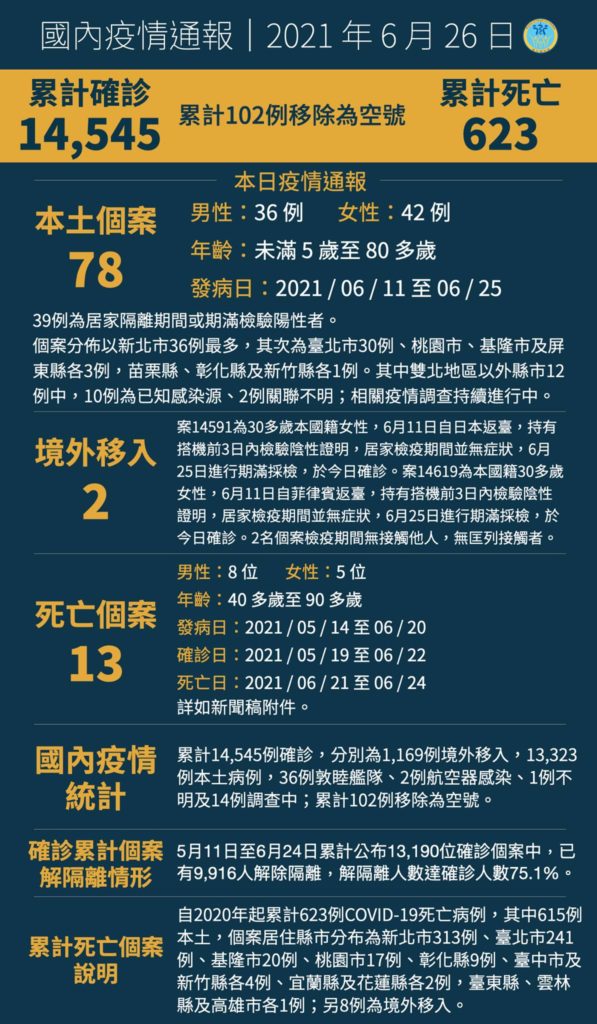 Namely, the villages are home to two imported cases with the Delta variant of COVID-19, with seven cases of COVID-19 including a taxi driver, relatives, and neighbors having been diagnosed with COVID-19 afterward. 888 tests have been carried out in two villages. To date, most tests have been negative, with 444 rapid tested, all having negative test results. There were 419 PCR tests, which were also all negative. 25 tests are still being processed. Hotspots are being drawn up and contact tracing is under way.

Some of these cases are older, but there are currently no cases that are in the ICU. Some cases are taking remdesivir or antibody medications.

As this cluster includes cases passed on despite home quarantine, this is probably why the CECC announced an end to home quarantines yesterday, now requiring individuals to be quarantined in quarantine facilities or hotels.

With individuals eighteen or older allowed to sign up to be vaccinated with leftover vaccine doses at clinics, each city has rolled out different policies to sign up. Most require sign-ups at hospitals or clinics, while many cities are still hoping to focus on vaccine priority categories. A number of cities do not have enough vaccines to distribute leftover vaccines. 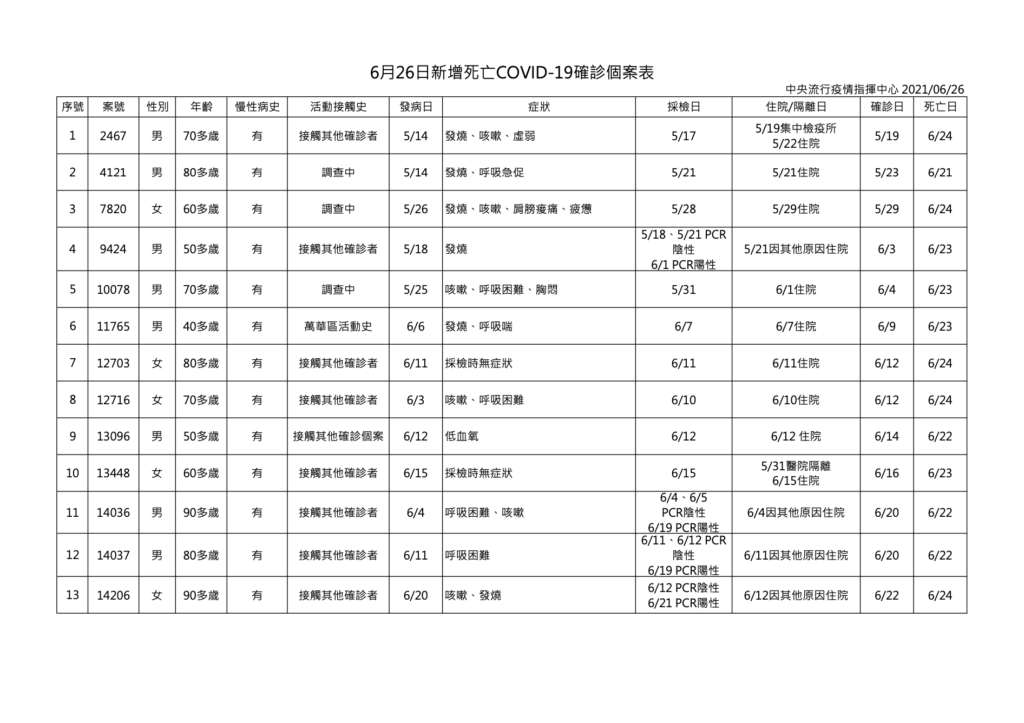 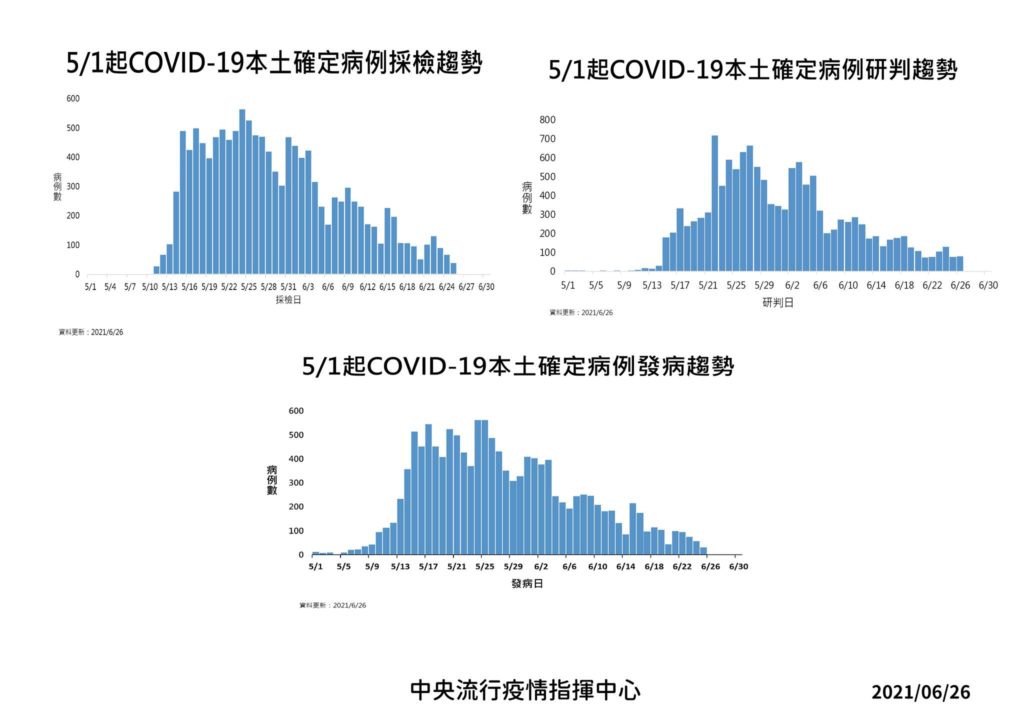 Information on the new deaths announced today and further data released by the CECC. Photo credit: Ministry of Health and Welfare/Facebook

A hot springs hotel in Tamsui, which was previously ordered to close because of its mixing quarantine facilities with regular facilities for guests, has come under scrutiny for violating vaccine priority order. While hotel workers are included in the firstline personnel for vaccination, the hotel took advantage of this to also vaccinate workers in its real estate branch, who are not firstline workers.

A cluster at the Military Taoyuan General Hospital has now expanded to 30 cases, with fourteen cases added yesterday. 15 patients that are currently hospitalized at the hospital due to COVID-19 will be moved elsewhere, while services at the hospital will stop for fourteen days, with the hospital operating at limited capacity.

The CECC reasserted that firefighters are included in the vaccination categories because of their roles saving lives, as frontline medical personnel. The CECC also went over the distribution of medical supplies for firefighters today, showing adequate supply.

Audrey Tang’s vaccine distribution system is reportedly complete and ready to launch, though the CECC is waiting for more vaccines to arrive before launching it. The CECC did not offer an exact timeline for when this system would be launched, but the launch would take place nationwide. Vaccination categories will be expanded next week for the Moderna vaccine.

It has proven hard to secure appointments for vaccination in some areas. In one notable incident, 50 vaccination appointments were reserved almost immediately after they were opened up in Zhubei, Miaoli.

The TPP has called for an integrated tracking system to be used for tracking the spread of COVID-19, similar to that used in Singapore.

Blood oximeters are reportedly out of stock in many places in Taiwan, due to members of the public buying them. Likewise, there are reports of fake oximeters being sold.

Germany, Belgium, France, and the Netherlands have eased rules for travelers from Taiwan. Despite the current outbreaks, Taiwan is still considered low-risk.

Minister of Health and Welfare Chen Shih-chung indicated that reports that a shipment of the Moderna vaccine would arrive this weekend were inaccurate. Chen stated that he would have announced this, if this were to take place.

New Taipei mayor Hou You-yi has called for a third dose of vaccine to be imported to Taiwan, to deal with the Delta variant of COVID-19—this despite that vaccines are still insufficient for the first two doses of vaccinations. Hou also called for strengthened measures regarding migrant workers and increased fines for employers that violate these restrictions. Hou denied reports that he had contact with Shanghai Fosun, while other New Taipei officials downplayed contact with Shanghai Fosun.

TSMC and FoxConn have signed further documents with the government regarding their plans to purchase BioNTech vaccines. It is to be seen what other steps need to be carried out for their vaccine purchase plans to take place, though the CECC has stated that more documentation needs to be provided. The Executive Yuan has stated that TSMC and FoxConn have now been authorized to negotiate with BioNTech on behalf of the government.

Taiwan’s representative to the US, Hsiao Bi-khim, has posted a behind-the-scenes photo about the US’ vaccine contribution of 2.5 million vaccines to Taiwan. This includes Hsiao signing necessary documentation needed immediately before the shipment could take place.

According to the Apple Daily, Shanghai Fosun has been in contact with pan-Blue local governments regarding vaccine purchases since April, and was originally hoping that New Taipei would take the lead regarding vaccine purchases. As this was before the start of the current outbreak, when pan-Blue mayors began calling for the central government to allow local governments to purchase vaccines, this may have been with the aims of purchasing from Fosun. The CECC has continued to emphasize that it needs the authorization document from the original manufacturer for vaccine purchases of BioNTech, of which Fosun is the greater China distributor, and that it will not allow purchases of Chinese-manufactured vaccines.

Taipei mayor Ko Wen-je still seems to be considering how to re-open, citing the example of the US as a country which still sees over 10,000 cases per day and is only at 55% with their first dose of COVID-19 vaccine, yet has begun to re-open. Ko does not believe that Taiwan can return to zero cases, hence the need to consider such measures. According to Ko, the Taipei city government is treating Wanhua as a special case, but emphasizes that cases overall in Taipei are on the decline, and more cases among young people and asymptomatic cases are being found. As there was difficulties integrating information between different local governments in the past, Taipei is coordinating with the CECC and New Taipei to integrate data, particular with regards to the TAPMC cluster. Ko suggests Taipei city will wait and see the vaccine registration system rolled out by the central government before deciding whether to use it or not.

With Ko having decided to vaccinate TAPMC workers, 10,000 doses of vaccines will be reserved for TAPMC workers. Ko stated that Taipei is investigating using the Miaoli clusters as reference for managing the TAPMC cluster and will invite staff involved in handling the Miaoli cluster to assist. That being said, Ko previously claimed that Wanhua was no longer a hotspot, to try and tout as a policy accomplishment, and last week claimed that the TAPMC cluster could not be compared to the Miaoli cluster, because TAPMC workers primarily live near the market and in apartments, not dormitories. Huanan has 43 cumulative cases to date, raising concerns that it could become another cluster on par with TAPMC, which has at least 54 cases.

Autopsy results still do not show links between vaccinations and sudden deaths that have taken place after vaccination. The CECC has stressed that some symptoms that result in sudden deaths, such as hematic acid, could not have appeared overnight.