A RALLY AGAINST the KMT, specifically targeting KMT legislator Wu Sz-huai and other pro-China legislators, was held outside DPP headquarters tonight.

The rally, which was attended by several thousand, featured many of the star politicians from the DPP and affiliated pan-Green parties. The rally began at 6 PM and lasted until after 9 PM, despite periodic outbreaks of rain. 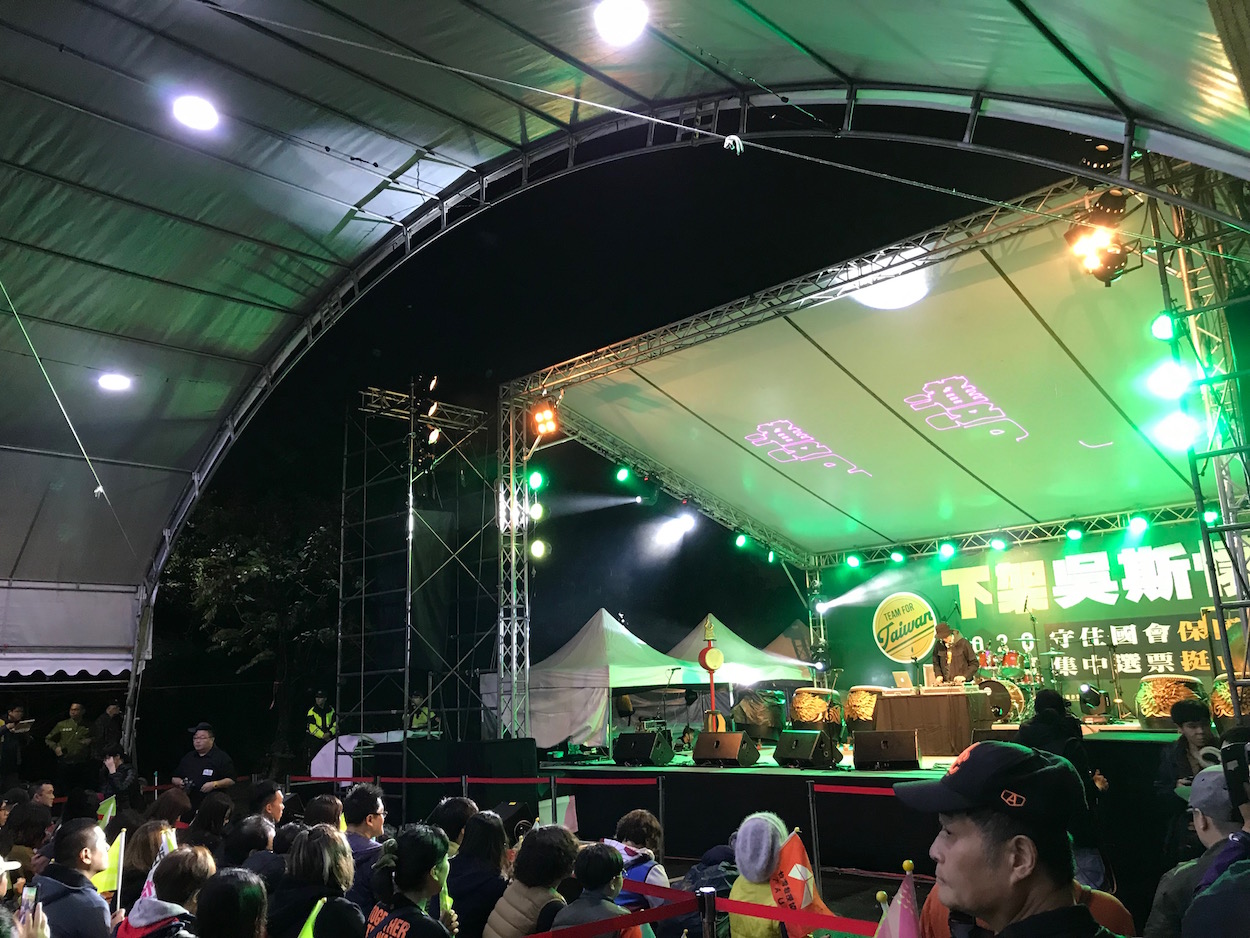 The KMT saw severe backlash from the Taiwanese public after the release of its party list last month. The party list consists of the legislators who are elected on the basis of proportional voting for political parties rather than running in districts. While voters do not pay attention to the party list in most years, this year’s KMT party list provoked outrage from the public because of the large number of pro-China legislators on it.

Wu Sz-huai has become a particular target of ire, seeing as Wu, a retired general, had previously traveled to China to meet with Chinese officials, making public statements advising the Chinese military on how it could defeat the Taiwanese military in warfare. Although the KMT later revised its party list, removing individuals such as former legislator Chiu Yi—who had openly advocated the decapitation of Taiwanese independence supporters—Wu remained on the party list. 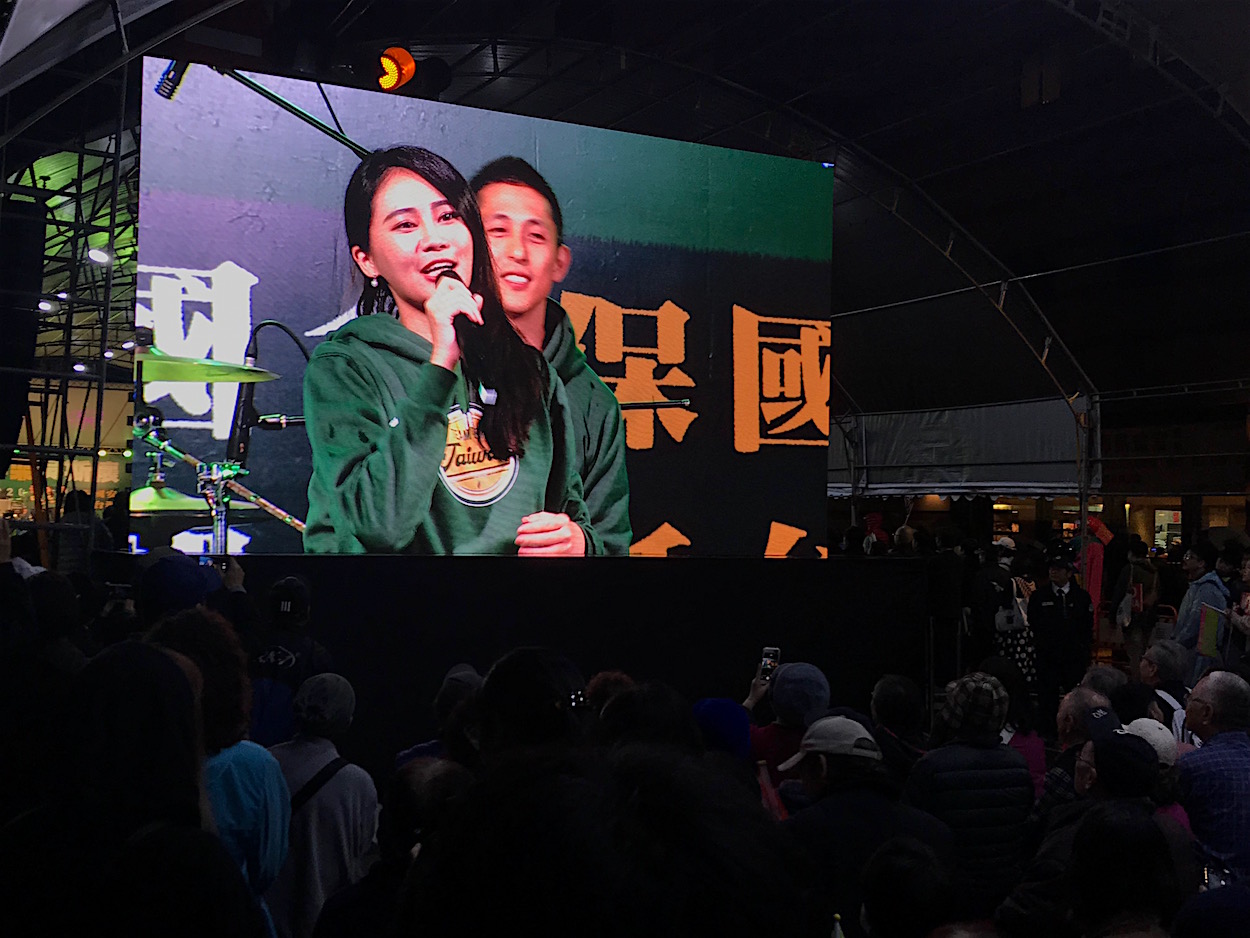 The campaign against Wu began with DPP legislative candidate Enoch Wu, one of the members of the “Democracy Frontline” interparty alliance of young Pan-Green legislative candidates. Wu and other young Pan-Green candidates called on voters to not vote for the KMT in sufficient numbers that Wu Sz-huai, the number four candidate on the KMT party list, would not be voted into office. It is generally expected that the first dozen or so candidates of a major political party’s party list will make it into office.

The attendance of today’s rally tended toward older pan-Green supporters and the style of the rally was closer to that of a traditional political rally, though younger participants were also mixed in. DPP heavyweights including vice presidential candidate William Lai, party chair Cho Jung-tai, Yu Shyi-kun and Taoyuan mayor Cheng Wen-tsan were present. At the same time, younger candidates of the DPP and affiliated pan-Green politicians were heavily spotlighted at the rally, including Freddy Lim, Hsieh Pei-fen, Chen Bo-wei, He Zhi-wei, Lai Ping-Yu, and others, providing the public face for the rally. 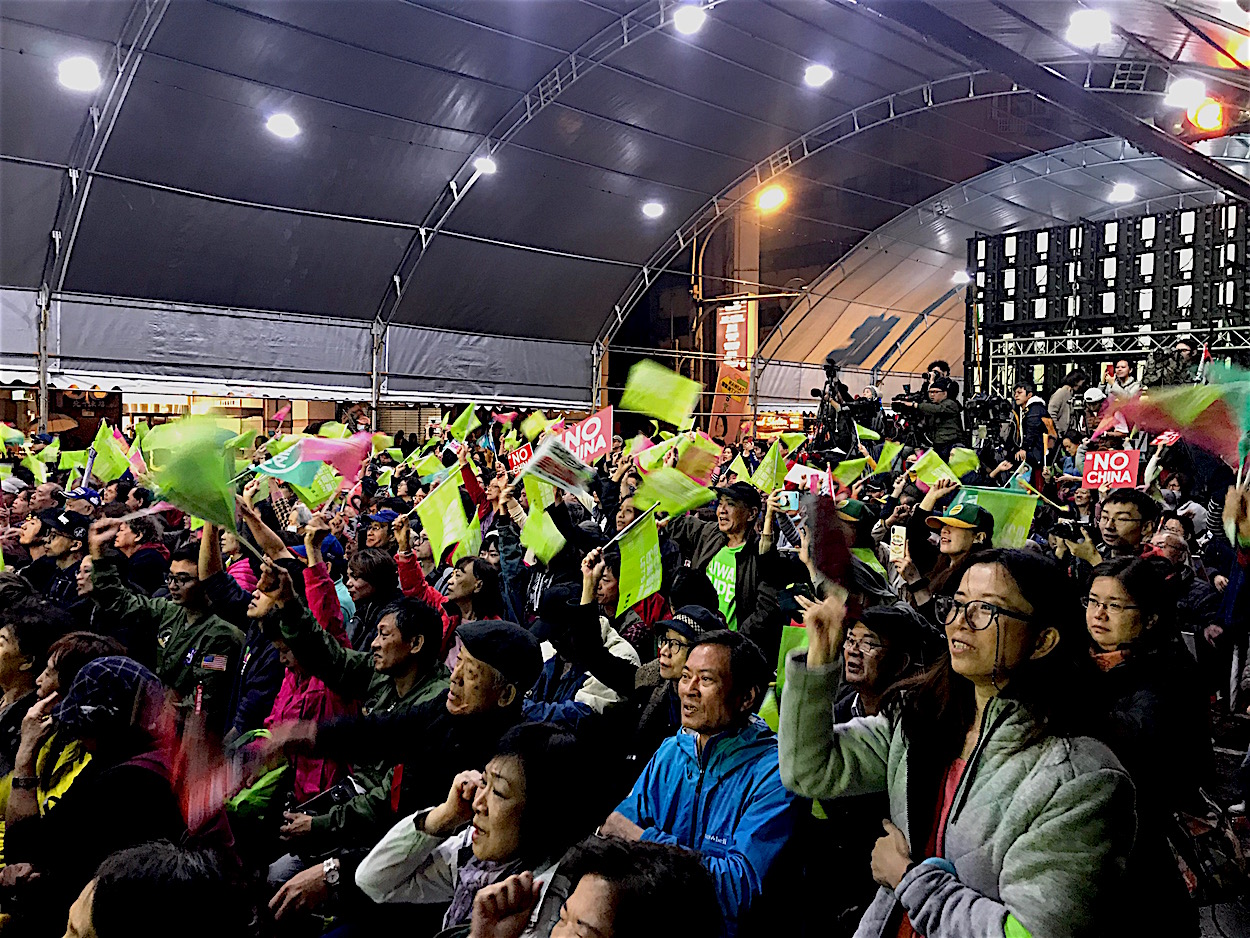 DPP secretary-general Luo Wen-jia and former Sunflower Movement student leader Lin Fei-fan, the current secretary-general of the DPP, also spoke to great fanfare, representing links between past and present student movements in Taiwan. Lin, in particular, pointed out that many of the heads of key DPP departments, such as the social movement department and the news department, were former post-Sunflower Movement youth activists. As young candidates of the “Democracy Frontline” are primarily running in areas in which they are at a disadvantage, Lim, Lai, Chen, and Wu touted that their current polling showed that they were close to overtaking their opponents.

In comments, speakers remarked on as to how KMT legislators were all “Wu Sz-huais”, that KMT politicians were consistently discriminatory toward women, indigenous, new immigrants and others, and that their actions after the outbreak of the Anti-ELAB Movement illustrated that the KMT continued to be a pro-China party. As such, it was suggested that if Taiwanese voters did not vote against the KMT, this could eventually lead to the situation in Taiwan becoming similar to that of Hong Kong. Speakers discussed the need to distinguish old forms of politics from a newer, more progressive form of politics and to lower the voting age to 18, to allow young people more of a voice in politics. 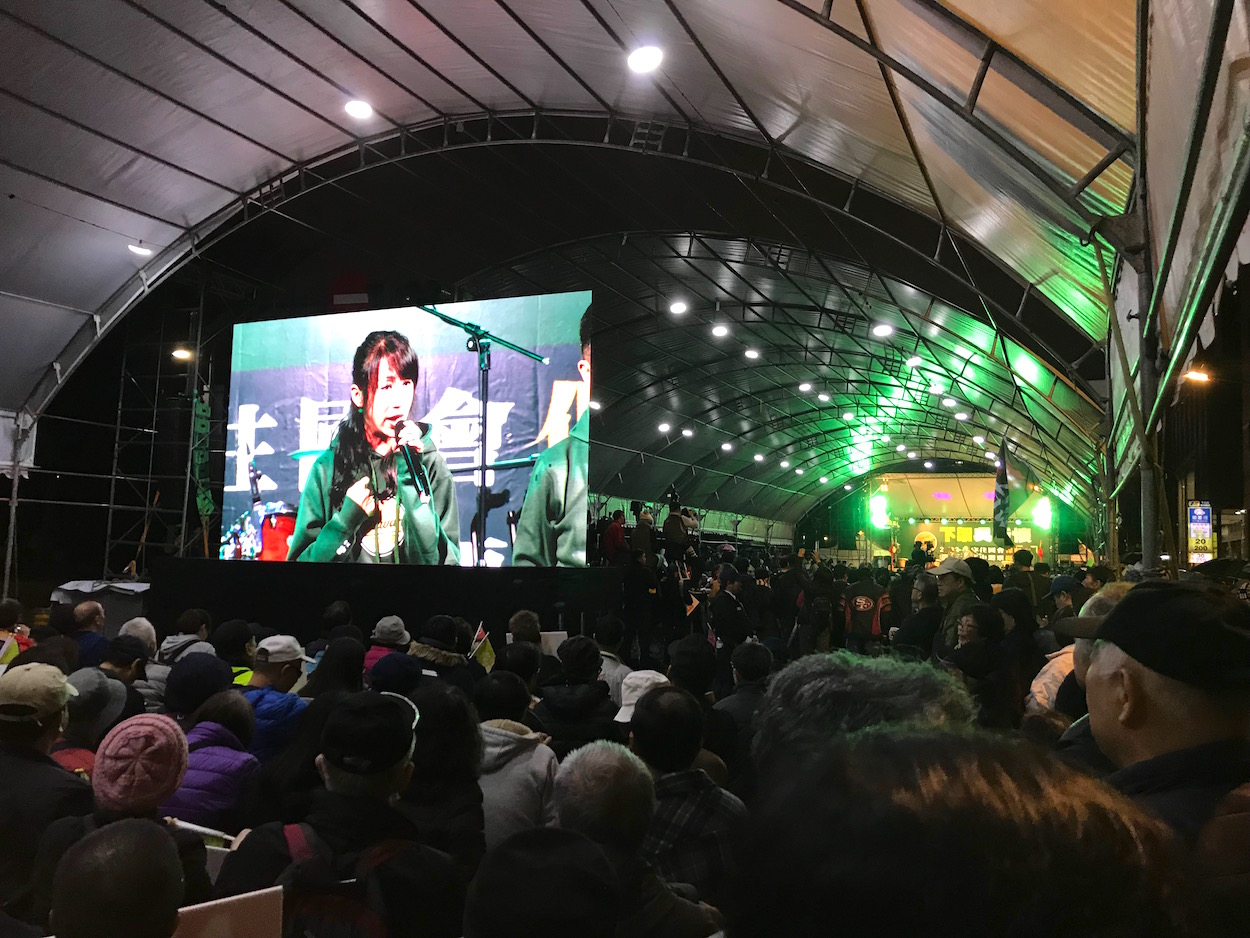 The musical performances at the rally were, however, more oriented toward younger participants, with performances by Dwagie, The Chairman, the Chiu Tian drum troupe, and DJ Andy Lai, who played songs using vocal samples from Tsai Ing-wen, Han Kuo-Yu, Lin Fei-fan, and others. At one point, an individual in a lion costume wearing boxing gloves was introduced one stage as a “Protect the Nation, Protect Taiwan Lion and during the rally’s conclusion, large rubber balls were rolled into the audience.

Booths were set up to sell campaign merchandise as well, with attendees lining up to buy campaign goods from 5:30 PM onward, with the release of a new campaign jacket specifically regarding the campaign against Wu Sz-huai. Of the third force parties, the Taiwan Statebuilding Party, whose Taichung legislative candidate Chen Bo-wei is part of the “Democracy Frontline”, was also present at the rally. 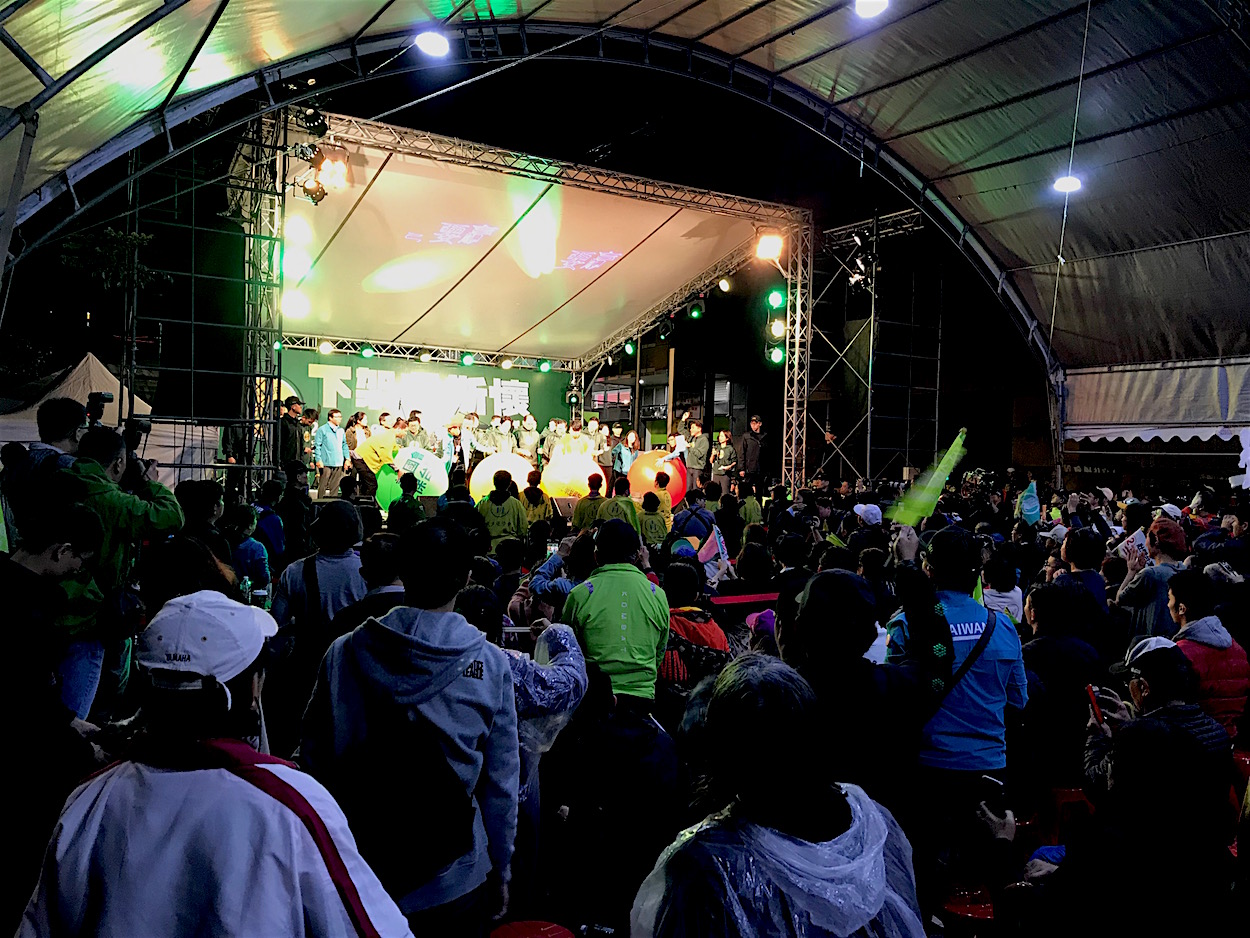 DPP legislative candidates preparing to roll large rubber balls into the audience at the end of the rally. Photo credit: Brian Hioe

In the meantime, with less than two weeks left before elections, it is to be seen whether the DPP’s campaign against Wu Sz-huai and other KMT legislators will be successful. The DPP is aiming to retain its current majority in the Legislative Yuan.