37 DOMESTIC CASES, 2 imported cases were announced by the Central Epidemic Command Center (CECC) at its daily press conference today. 13 of these cases were already in quarantine. Two deaths were also announced today. 18 cases were in Taipei, 11 cases were in New Taipei, three cases each in Changhua and Taoyuan, and two cases in Yilan. 79.2% of cases to date have been released from quarantine.

Nine more individuals were found to be infected with COVID-19 at the Huannan Market yesterday, with over 2,000 tests conducted. To carry out the task, workers were divided into ten lines at the First Fruit and Vegetable Market, of the two major markets of the Taipei Agricultural Products Marketing Corporation (TAPMC), along with the Second Fruit and Vegetable Market. 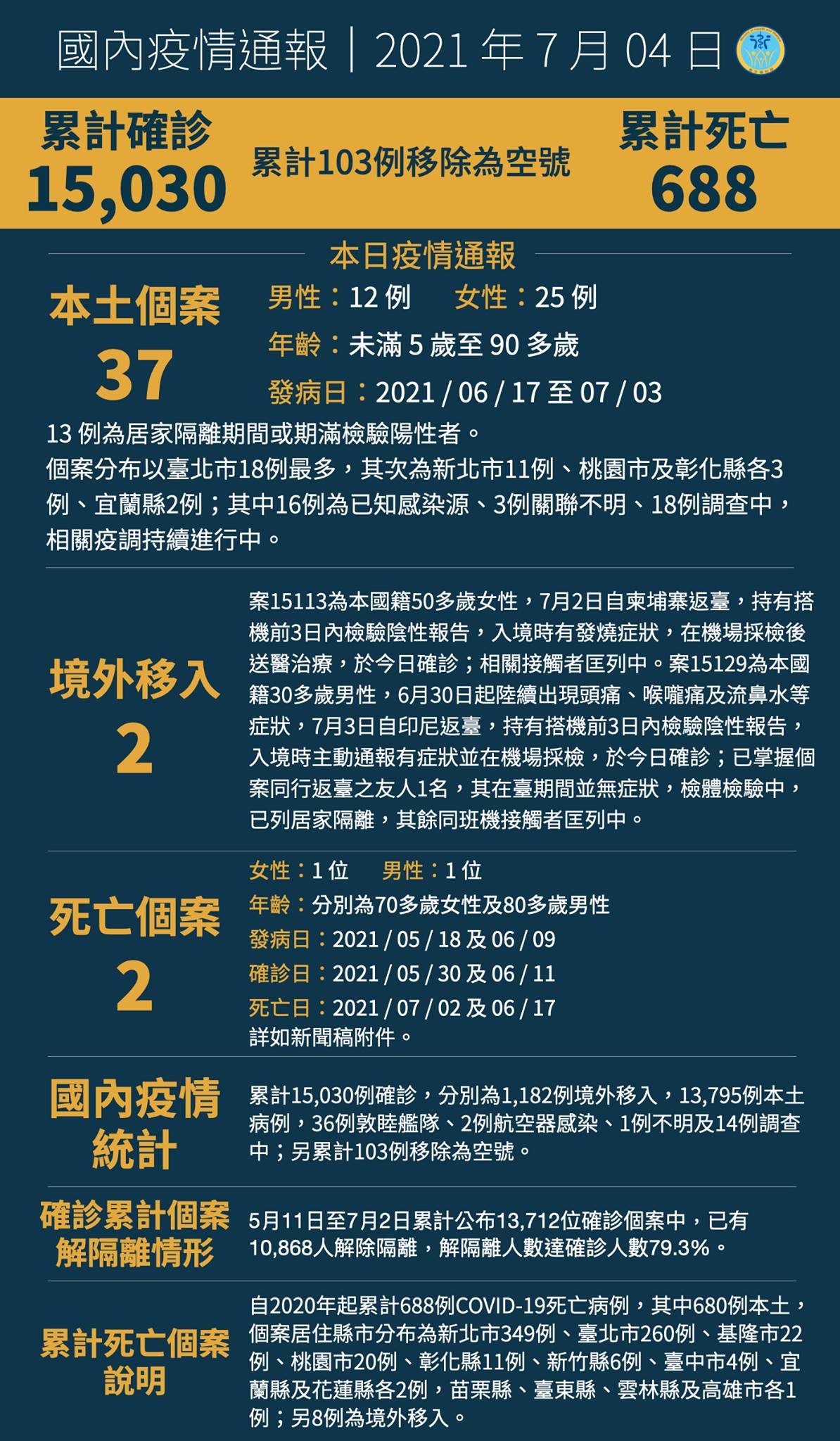 182 have been quarantined in connection with the 41 cases reported two days ago for the Huannan Market cluster, with 187 contacts listed. The CECC is still concerned about widening contact tracing for these individuals, however, stressing that contact tracing needs to be more specific, since three cases were found in the neighborhood. Testing at the Huannan Market and TAPMC will continue. There is not a specific hotspot regarding the Huannan Market, so there is a need to divide up shifts to avoid crowds and separate out particular areas in the market

Some differences in numbers in past days because testing picked up old cases, with the CECC calling on members of the public not to circulate misinformation/disinformation regarding adjustments in numbers.

The CECC has stated that local governments will begin to offer documentation to prove that individuals have been released from quarantine. Namely, the Ct values of individuals no longer positive for COVID-19 may fluctuate in the three to four months after recovery, making it difficult for them to test negative on PCR test results, and individuals who have had COVID-19 in the last six months are currently not eligible for vaccination. As such, it is difficult for some individuals to return to work, not having negative PCR test results or proof of COVID-19 vaccination. This is why the new document will be rolled out, with the CECC stressing fines of up to 150,000 NT for discriminating against individuals who have recovered from COVID-19. 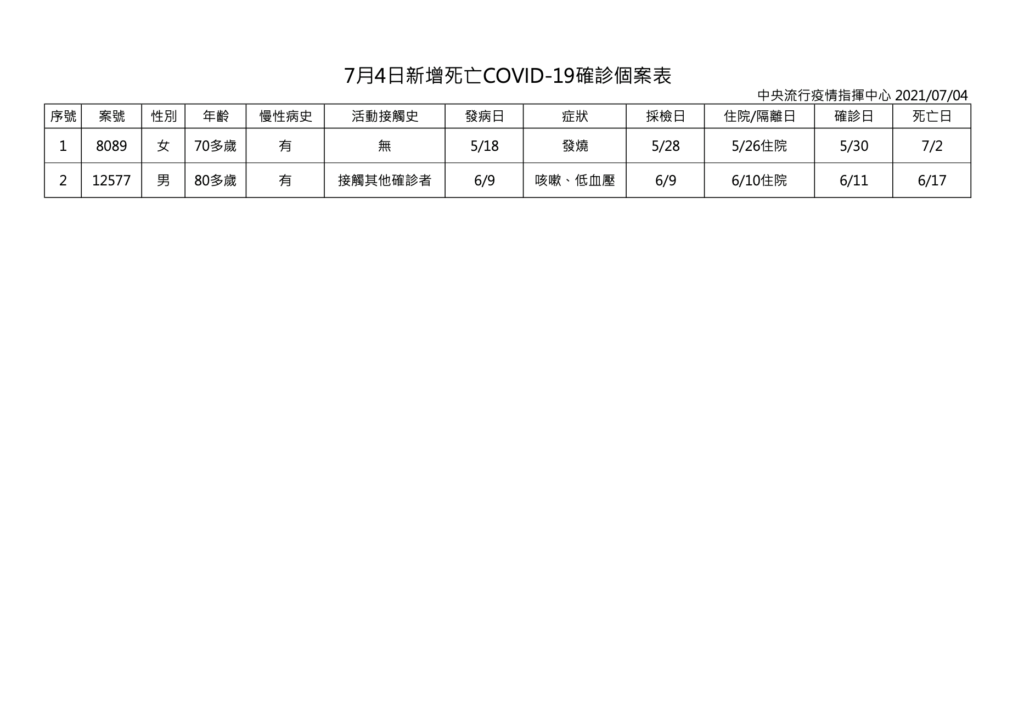 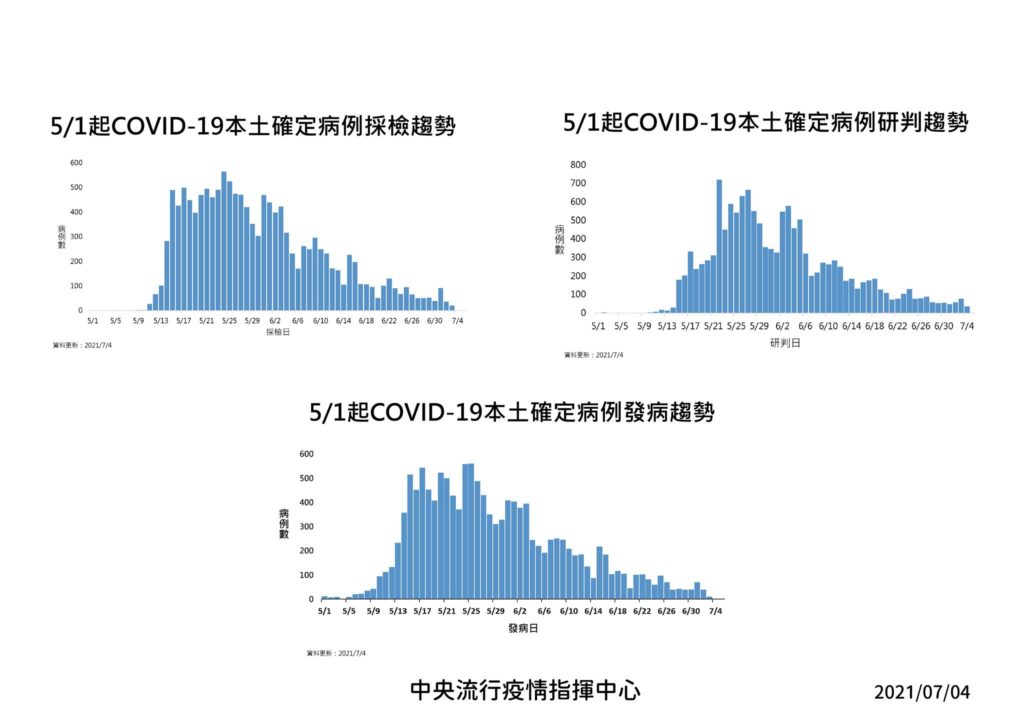 Testing for over 3,300 individuals in the vicinity of Hulin Street in Taipei will take place in the coming days, due to 30 cases in thirteen households having been found from June 1st to July 3rd, suggesting spread in the community. This is cumulative, not a one-day jump. Nonetheless, the Taipei city government is treating the incident as a special case in carrying out widespread testing. The sudden announcement by the city government of testing plans has led to criticisms from local lizhang, with some critical of not being notified ahead of time by the city government. With complexities in carrying out testing, the CECC has stated that Taipei city can examine policies set by the CECC.

Taipei has quietly reshuffled Department of Health personnel after scandals involving vaccine priority order being violated at Taipei clinics. However, the Taipei city government is still reluctant about Department of Health director Huang Shi-jie returning to work, Huang currently having taken the month off after being requested to do so by Taipei deputy mayor Huang Shan-shan. This has led to criticisms of Taipei mayor Ko Wen-je, who refused to accept Huang’s offer to resign in the wake of the scandal. Yet it makes little difference if Huang is not coming to work.

Although Huang stated he would like to return to work after being questioned by the Taipei city council, the Taipei city government stated yesterday that it believes it is preferable for Huang to remain at home, claiming that this could better assist the investigation into the violations of vaccine priority order. Nevertheless, Huang is welcome to attend important meetings.

According to Taipei mayor Ko Wen-je, there were 52 positive tests yesterday, so that 18 cases were reported for Taipei today shows some lags reporting statistics. Zhongzheng District, which is adjacent to Wanhua, is currently considered a hotspot. Ko stated that PCR tests would now take precedent in Taipei, with 98.2% of PCR tests reported on the same day as they are conducted. Ko defended his strategy of vaccination TAPMC workers and lashed out at the media, public commentators, and city councilors for accusing Taipei of being lax on contact tracing. Memorably, Ko then claimed that public commentators’ criticizing him was similar to the atmosphere that led to Hitler’s democratically being elected in Germany, though one notes that frequent attacks on the media seems more characteristic of Hitler’s rise.

Taipei city otherwise downplayed the severity of the Hulin Street cluster, attributing large-scale by the city government to proactive policy rather than belatedly discovering transmission chains in Xinyi District, which has to date seen few cases. Ko cited the US and Japan opening up as examples of countries deciding how they would adjust to a post-COVID world and suggested that Taiwan needed to do to the same and also lashed out at policy vaccinating key personnel needed to run the nation as violating vaccine priority order.

New Taipei mayor Hou You-yi has announced that the Boai Street Market and Chongqing Market will be closed for three days for disinfection due to COVID-19 cases, while all vendors will be tested. Vaccination for market vendors will take place between July 5th and July 15th.

Hou stated that he welcomes individuals from Taipei being tested in New Taipei, given frequent movement between the two cities, and that parks and outdoor areas would remain closed. Furthermore, Hou stated that he believed that it is too early to discuss relaxing level three measures, such as allowing for indoor dining. 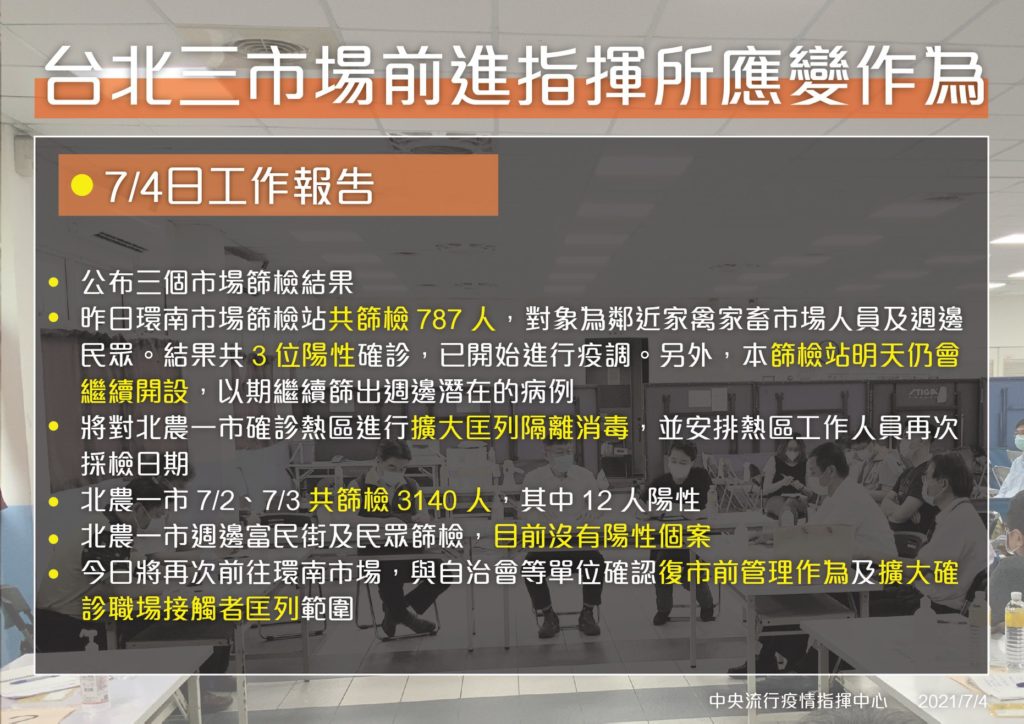 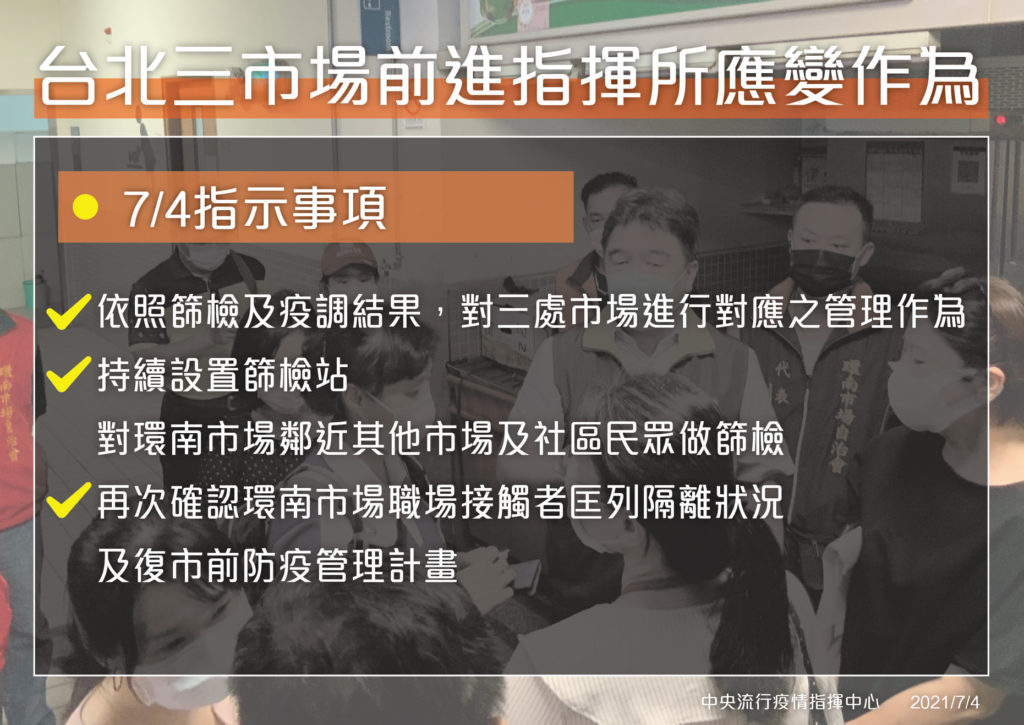 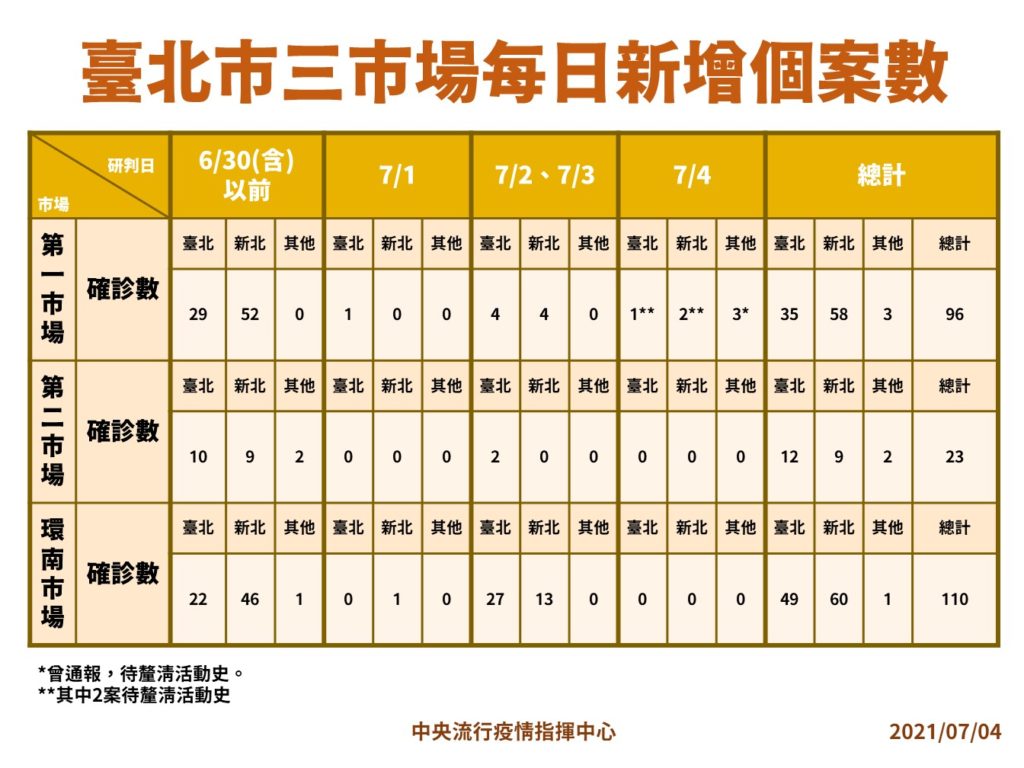 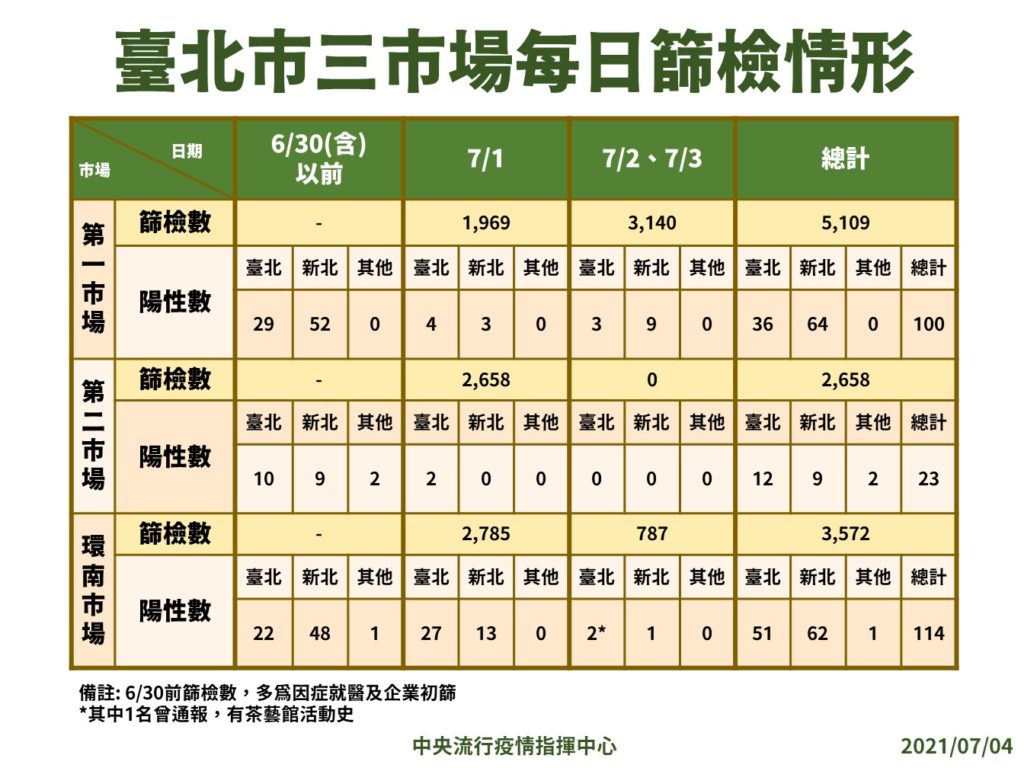 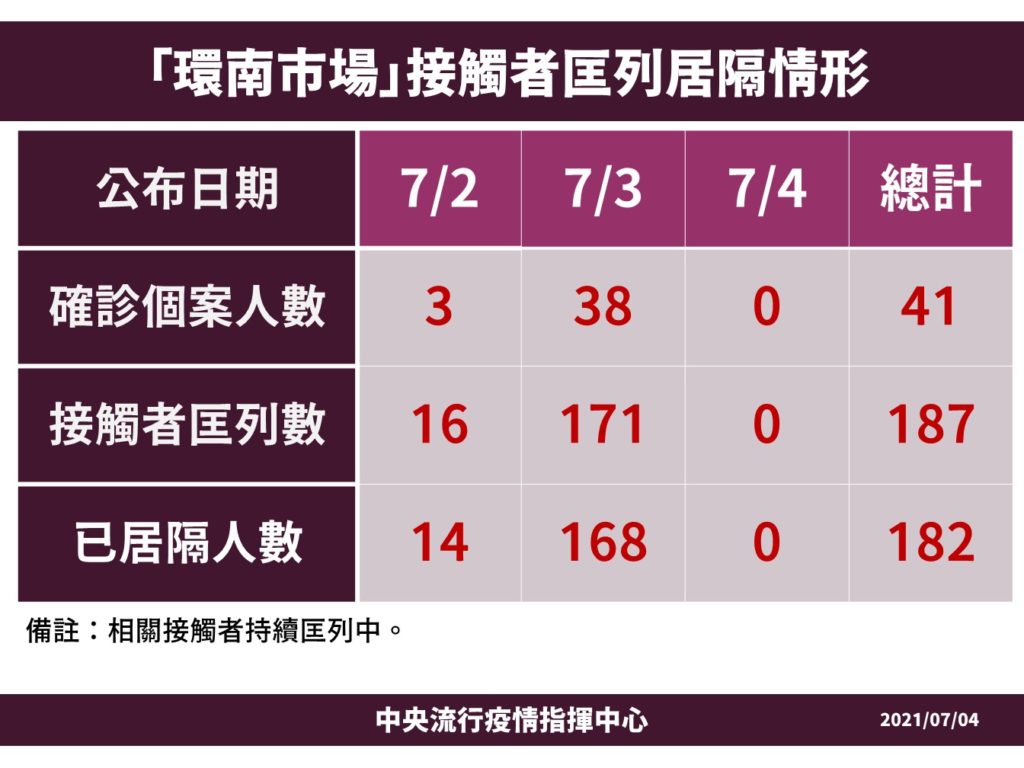 Some night markets resumed operation in Taitung, having been closed since the level three alert was announced on May 16th. Taitung has seen 23 consecutive days with no cases of COVID-19, however. More generally, the CECC stresses that night markets and traditional markets are not completely shut down, take-out is allowed, but that crowd control measures and QR code registration should be maintained

There are reports of crowds in the Neihu Costco, due to increased shopping over the holiday. The Taipei city government is planning on vaccinating MRT workers starting next week. Traffic is up on public transport in the past few days.

Three Miaoli city councilors from the DPP, NPP, and independent Zeng Wen-xue received phone threats after issuing a letter criticizing Miaoli county magistrate Hsu Yao-chang of the KMT and calling for the replacement of the head of the Miaoli Department of Health. The suspected culprit, a 67-year-old man surnamed Qiu, is already in custody.

Taiwan is now expected to have 40 million vaccines, with TSMC and Hon Hai’s vaccine purchase agreement with BioNTech through Shanghai Fosun. This should be enough to vaccinate the majority of Taiwan’s population, provided that they arrive. FoxConn CEO Terry Gou has refused to confirm or deny reports that TSMC and FoxConn have reached an agreement with Fosun, however. The CECC also declined to reveal any new information today.

Taiwan saw record numbers of vaccinations yesterday, with 184,000 vaccinated in a single day, and 167,650 choosing the Moderna vaccine. This is thought to be due to individuals that wish to be vaccinated with the Moderna vaccine, seeing AstraZeneca vaccines as dangerous. That being said, the Taiwanese media has also now begun to report on the Moderna vaccine as though it causes sudden deaths, similar to how similar reporting led to fears about AstraZeneca. As 200 people over 70 die per day in Taiwan, it should not be surprising that this overlaps with those being vaccinated.

Criticisms have taken place in Fengshan, Kaohsiung due to individuals being vaccinated as market vendors who may not necessarily actually be working in the market on a day-to-day basis. This has led to accusations that some individuals may be being vaccinated due to pulling connections, similar to the Good Liver Clinic and Dianthus Clinic in Taipei.

Vietnam has reported a positive COVID-19 case that traveled from Taiwan. This individual was tested twice in Vietnam and had negative tests. His family members have been tested and are positive, it is thought he is not infectious while in Taiwan, though it’s a question where he became infected.

KMT chair Johnny Chiang has lashed out against the scheduling of the recall vote against Chen Po-wei of the Taiwan Statebuilding Party for late August, while the national referendum was delayed, claiming that this shows the disregard of the DPP for the lives of Taichung residents. It is probable that the KMT wishes to push back the referendum date in order to secure a higher turnout for the recall vote, since low turnout due to fears of COVID-19 may result in the recall not meeting benchmarks needed to be binding.

After a Dongmen market vendor spoke up for Freddy Lim, who was accused in front of cameras of doing little for Wanhua by the head of the Huannan Market, Lucifer Chu tried to go after her with the accusation that she is part of Freddy’s campaign team and is working for him. Chu is a translator known for his outspoken political views, including advocacy of the death penalty. Chu previously sent funeral flowers to the CECC to criticize its actions, something that resulted in charges of obstructing public officials in carrying out their duties.

The new document to prove release from quarantine. Photo credit: Ministry of Health and Welfare/Facebook

According to Lim, this vendor is a former member of his campaign team. Since Chu’s accusations, she has experienced numerous online death threats.

To deal with travelers to Taiwan that must be tested, eight to twelve new testing booths will be set up at the Taoyuan International Airport in the upcoming week. The forms that incoming passengers need to fill out have also been simplified. Daily testing plans at the airport are drawn up depending on the number of incoming flights for the next day.

The CECC is consulting with relevant agencies about new measures to be rolled out when level three is lifted, although it is still focused on addressing the existing clusters.