55 DOMESTIC CASES and one imported case were announced at the CECC daily press conference. 5 deaths were also announced. There were 23 cases in New Taipei, 22 cases in Taipei, five cases in Taoyuan, two cases each in Miaoli and Kaohsiung, and one case in Pingtung. It is known that there are two extra cases in Kaohsiung that have yet to be listed, due to clusters in a building in Fengshan.

27 of the new cases from today were already in quarantine, while 75.6% of cases to date have been released from quarantine.

410,000 Moderna vaccines from Taiwan’s vaccine purchase of Moderna are expected to arrive this afternoon at 5 PM. With some speculation in the past about vaccine shipments due to differences in packaging from previous shipments, Minister of Health and Welfare Chen Shih-chung reviewed the differences in packages from this shipment at the press conference today to prevent rampant speculation. 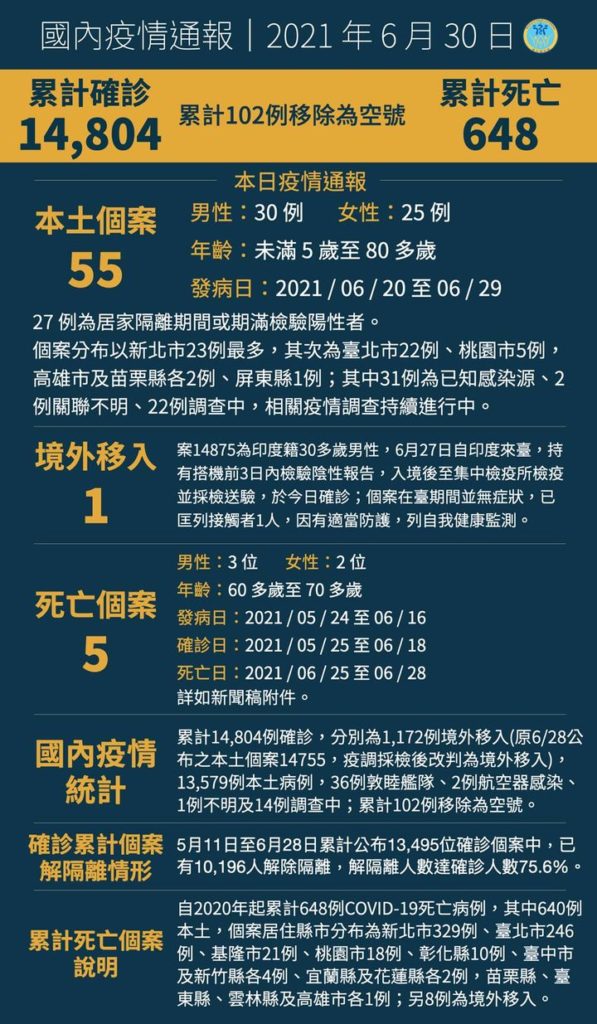 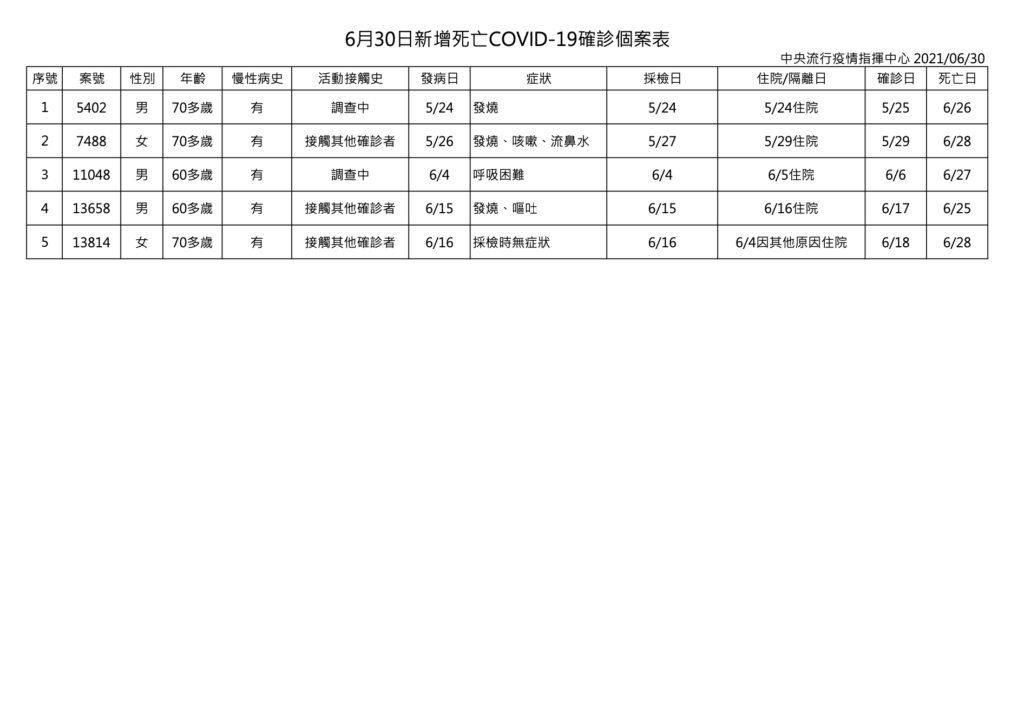 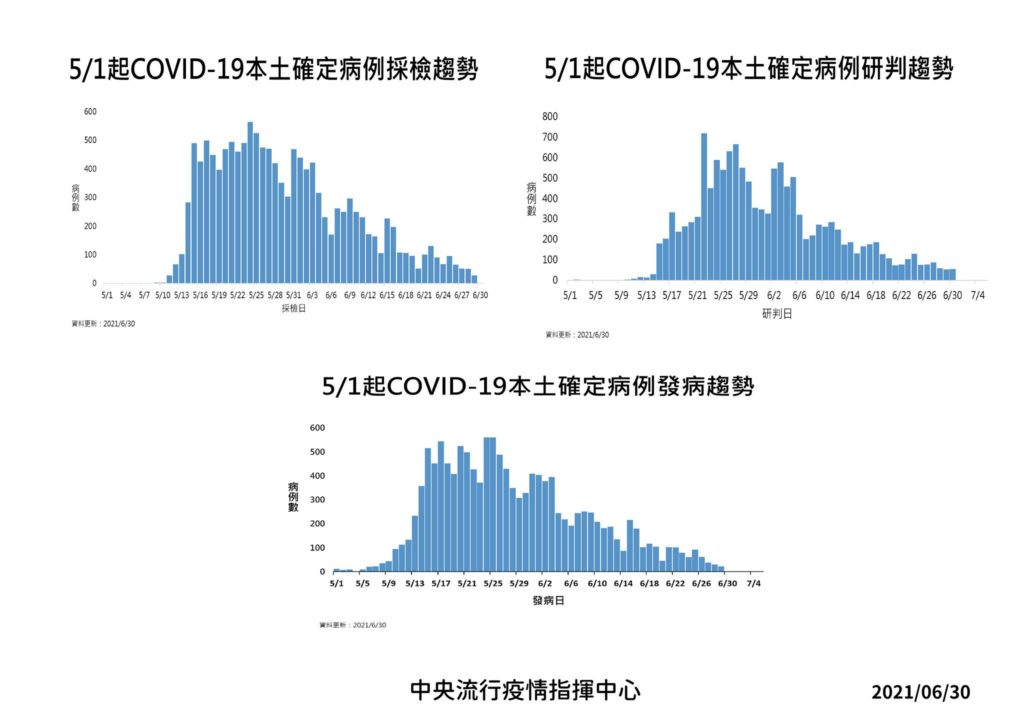 Contact tracing continues in Pingtung, due to the spread of the Delta variant to fourteen individuals after a grandmother and her grandson returned from Peru. Some contact tracing focuses on fruit sellers in Fangliao, while there is also concern about asymptomatic cases.

However, Chen Shih-chung stressed the potential severity of this case as requiring such measures at the CECC press conference today. In particular, there are cases in the building in Fengshan on two floors, leading to concerns about transmission chains of COVID-19 in the building.

Taipei mayor Ko Wen-je stressed quarantine subsidies for individuals needing to be quarantined in Taipei today. It is possible that quarantine subsidies may become an object of political contestation in the future. More generally, Ko has come under fire due to the development of multiple clusters in Taipei simultaneously, despite that reported cases are still down overall. Ko is accused of allowing undetected cases of COVID-19 to spread.

A new case in Pingtung is linked to the Delta variant cluster. With new testing centers set up in Pingtung, 2,197 were tested in one round of testing, with all negative test results. Another 2,344 were tested in another round, with 2,224 negative results, and 120 tests still being processed. 6,041 tests have been done in Pingtung in the last six days. There are currently 12 confirmed Delta variant cases, with three still being confirmed, and one case having too low of an Ct value to confirm.

392 hospital workers at the Fangliao Hospital in Pingtung have been tested, due to contact with a COVID-19 patient. Test results have also all been negative.

There continue to be concerns about the slackening of measures to fight COVID-19, particularly regarding using hand sanitizer, and crowd control measures. Chen Chi-chung, the Minister of the Council of Agriculture, was present at the CECC press conference today to reiterate such measures. Chen Shih-chung stated that he does not believe that the listing of contacts for vendors in close proximity to individuals infected is wide enough. 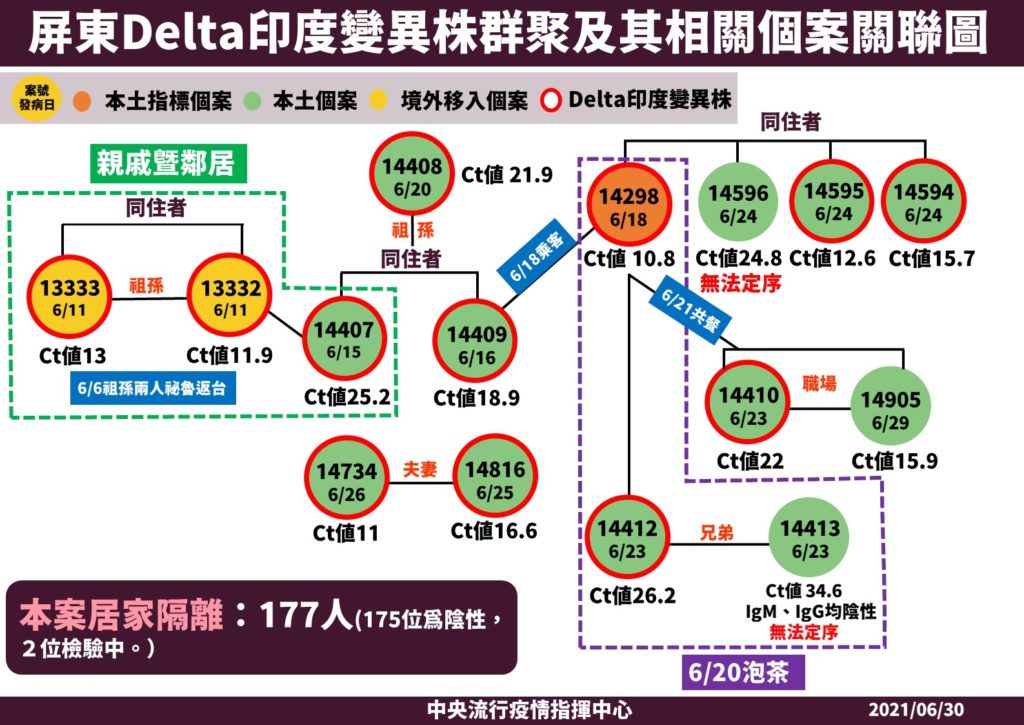 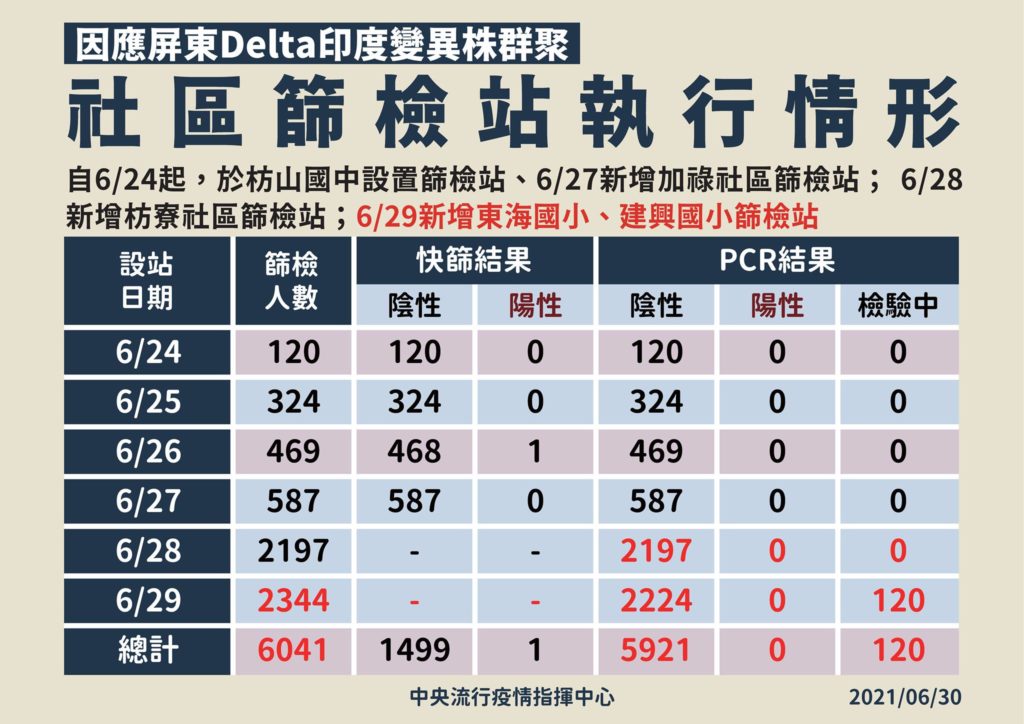 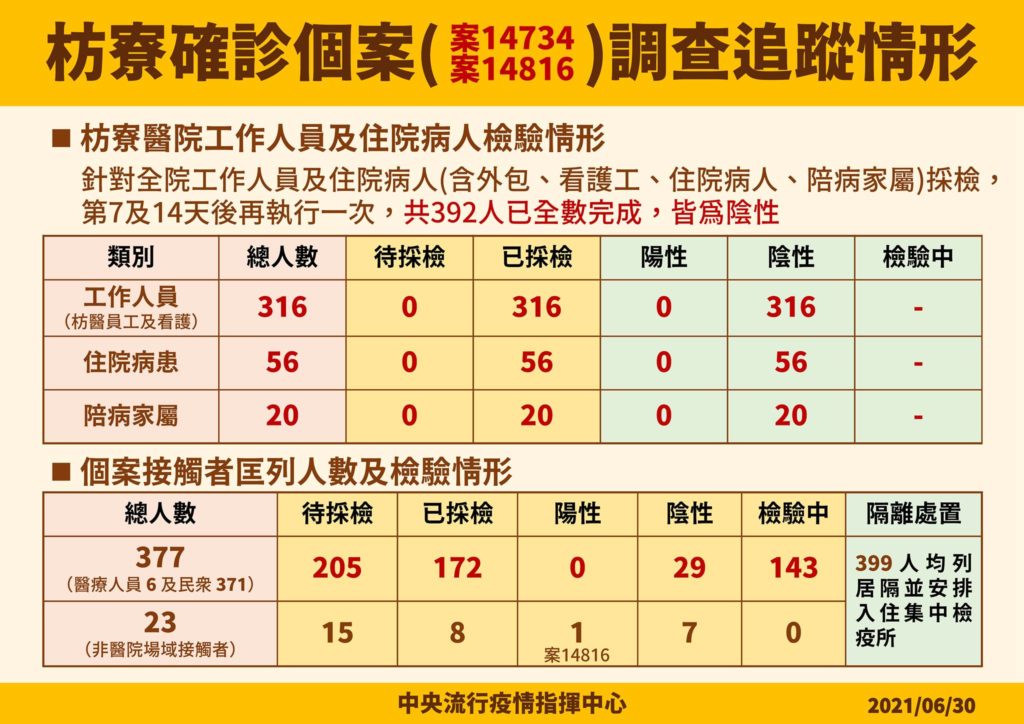 On the other hand, Taipei mayor Ko Wen-je has stated that he remains optimistic about the current cluster at the Taipei Agricultural Products Marketing Corporation (TAPMC). Ko also denied criticisms that Taipei city has been lax on contact tracing in connection to TAPMC. The Apple Daily reports that fake vendors are being vaccinated in connection to the TAPMC cluster, something that may lead to further criticisms of Ko in the wake of Taipei’s vaccination priority order scandal.

The next wave of vaccination distribution will focus on widening vaccine categories. Chen Shih-chung also defended vaccinating priority categories needed for the stable operation of the nation, stating that other countries have done similarly.

When asked about Ting Shou-chung of the KMT being vaccinated—which is seen as defying the vaccine priority order but was justified because he is the chair of a hospital—Chen stated that vaccine priority is based on contact with patients. The CECC will explore ways for individuals that experience allergies to their first vaccine to prove that they need to switch to a different vaccine for their second dose, to avoid violations of vaccine priority order.

The CECC is also examining how to gradually re-open, with reopening indoor establishments not having been opened up. The Taipei city government has stated that as part of reopening measures, it would consider vaccinating night market vendors first. Baseball games may possibly be allowed to take place, if the right measures are maintained.

More broadly, a decision will be made closer to July 12th about how to re-open. The CECC reported that there has not been any uptick in travel from the seven countries currently categorized as high-risk.

Perhaps due to the lower number of cases, local governments are to announce local COVID-19 cases in the morning, which will be integrated into the CECC’s understanding of the situation by the time of the daily press briefings in the afternoon. Previously, the CECC maintained that it would announce cases in the afternoon before local governments could publicize such results. Yet it is hard to root out transmission chains now, with lower cases.

A cluster infection of five has been reported in Sanchong. This took place among workers at the same department of a company.

Taipei will open to vaccinations of individuals above 72 years old starting from July 2nd, while Indigenous over 55 years old are eligible for vaccination. 87,000 doses of Moderna have been sent to Taipei as part of the most recent wave of vaccine distribution.

A clinic in Banqiao experienced a scare yesterday after a doctor who had contact with a COVID-19 case who worked at an electronics factory in Zhonghe tested positive for COVID-19. Rapid testing found the doctor, who has over 600 contacts from patients, to be positive. Nevertheless, PCR testing showed a negative test result. Further testing will be conducted.

President Tsai Ing-wen took to live stream yesterday to urge cooperation in the face of the COVID-19 outbreak. Notably, Tsai stated that TIFA trade talks that took with the US today would include discussion of how to simplify the process for exporting vaccines. This notably took place in a similar timeframe to the CECC revealing that it was negotiating with Moderna to obtain the rights to maintain vaccines in Taiwan yesterday, although the largest obstacle is Taiwan’s capacity to manufacture vaccines. As Moderna is an American company, it is possible that the CECC may hope that the US government will nudge Moderna in the direction of allowing Taiwan the rights to manufacture vaccines as part of TIFA negotiations. 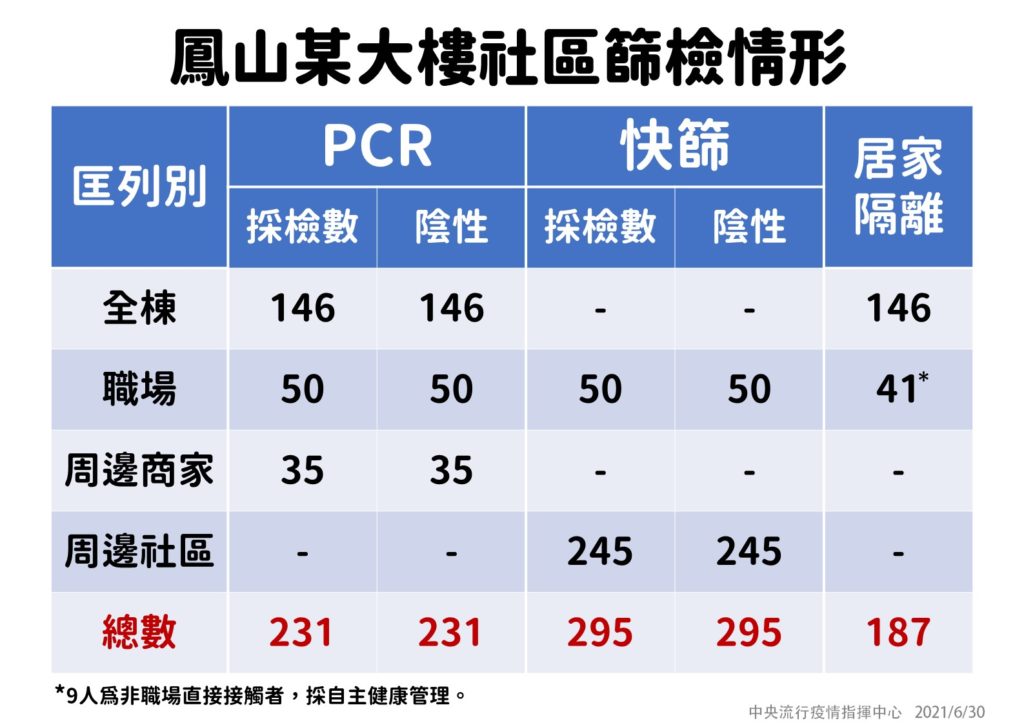 Information on testing in Fengshan, Kaohsiung. Photo credit: Ministry of Health and Welfare/Facebook

This has not prevented KMT chair Johnny Chiang from attacking the TIFA trade talks as a “black box” lacking in transparency, similar to the CSSTA. Chiang has been mocked because this statement implied that he, too, sees the CSSTA as a black box when the stance of his party was to push for the trade deal with China.

Unsurprisingly, then, Executive Yuan’s press conference regarding the TIFA trade talks stated that supply chain cooperation regarding not only semiconductor manufacturing, in line with the Biden administration’s 100 day supply chain review, but also medical supplies including vaccines. Efforts will be made to simplify the process for imports of medical supplies, including vaccines, into Taiwan. Discussion of Taiwan potentially contract manufacturing US vaccines will continue in a working group. The Executive Yuan otherwise stressed that the last time TIFA trade talks were held was in 2016 and that trade talks with in more of a cooperative than last time, while also asserting that the opening of trade talks shows Taiwan’s importance to the US.

Reports indicate that because of the current outbreak, it has become increasingly difficult to hire nurses or caregivers at present, affecting elderly in need of care.

Another successful childbirth by C-section has taken place after the mother became infected with COVID-19, the second such case in Taiwan after a similar case in May. The operation took place at the National Taiwan University Hospital, the mother being a nurse at the Yangming branch of the Taipei City Hospital who became infected as part of a cluster at the hospital.

The CECC still hopes for 10 million vaccines to be delivered by August and for 60% to be vaccinated with their first dose by the end of October, if enough vaccines arrive