A RECENT CONTROVERSY regarding the distribution of counterfeit “Made in Taiwan” masks proves the COVID-19 edition of a long-running social issue in Taiwan.

In particular, it proves an endemic issue in Taiwan that Taiwanese companies try to cut corners on their products as a means of reducing costs. Consequently, Taiwanese consumers end up with substandard products—sometimes with dangerous effects on health or safety.

One prominent example would be the frequent food safety scandals that Taiwan has seen over the past decade. Examples include the use of plasticizer to replace palm oil as a clouding agent by Taiwanese companies Yu Shen Chemical Company and Pin Han Perfumery Company in 2011, and the discovery of the sale adulterated cooking oil by nine Taiwanese companies in 2013, the largest of which were the Ting Hsin International Group and the Wei Chuan Food Corporation. This was followed by another adulterated cooking oil scandal in 2014, as well as the discovery of the use of methyl yellow in tofu in 2014. 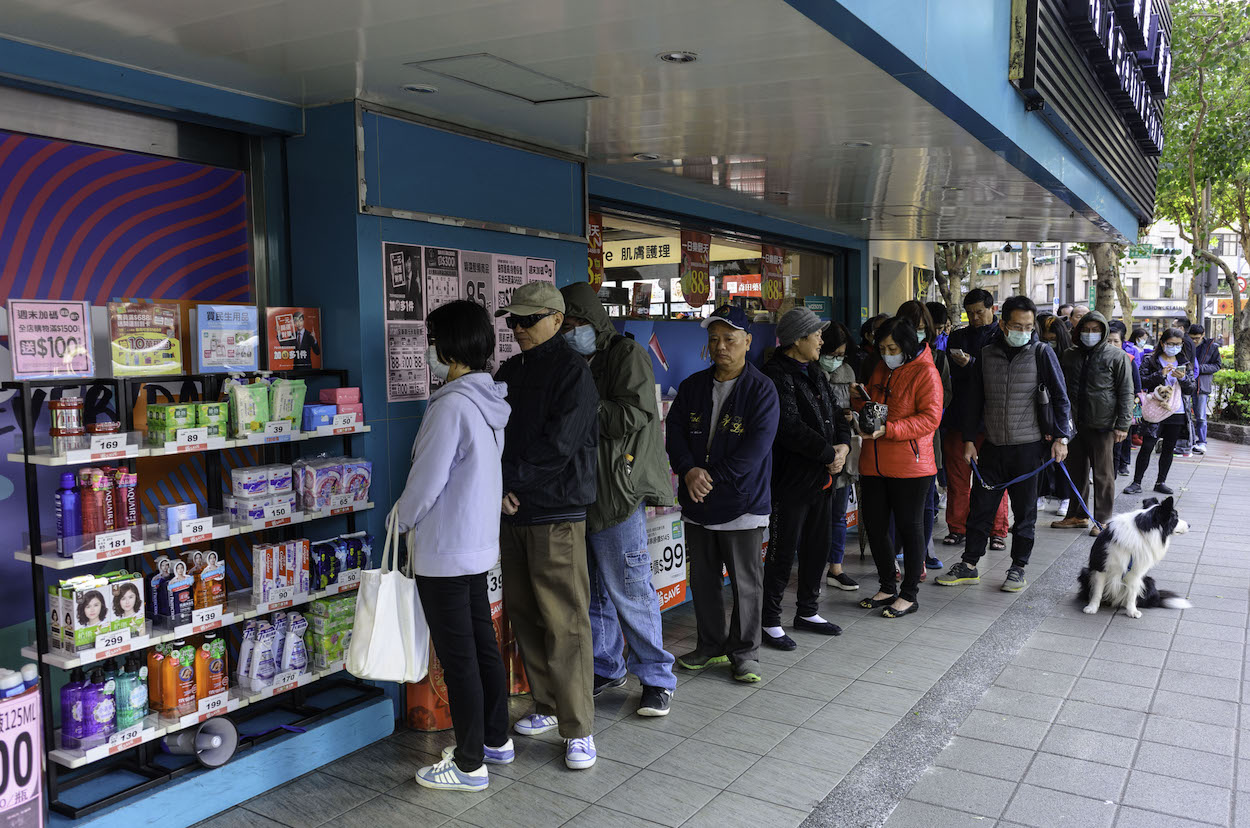 Line outside of a pharmacy for mask purchases. Photo credit: 玄史生

Other incidents in which shoddy construction or lax maintenance have resulted in deaths in the years since have proved similar. A recent example would be a fire in a Taipei KTV that resulted in the deaths of five people, with over fifty hospitalized. After the fire, it was found that safety equipment such as emergency lights, sprinklers, and fire alarms were not functional during the fire, with the building’s major fire safety features all proving non-functional during the fire.

In particular, the mask counterfeiting scandal has centered around several Taiwanese companies found to have been attempting to pass off non-medical grade masks imported from China as “Made in Taiwan” products. These include Carry Mask and Team Power Healthcare, which are based in New Taipei, and Haw Ping Company, which is located in Yuanlin. Both companies are part of the “National Team” of companies requisitioned to produce medical masks by the Taiwanese government.

Relatedly, a man in New Taipei surnamed Huang was found to have set up an underground mask production factory to produce masks passed off as products of the Taiwan Pro-Level Papers International Company. Subsequently, a Taichung company, the Chong Kuang Company, was found to have possibly relabeled Chinese-made masks in collaboration with Lih Yow, a certified medical company, by relabeling them as Lih Yow products.

Again, such companies are attempting to cut costs by importing cheaper Chinese products and passing them off as Taiwanese products. This is despite the risk to the safety of average citizens, seeing as this has involved passing off non-medical use masks as medical masks.

The Taiwanese government has gone at length to try and reassure members of the public that masks circulated in the Taiwanese market are safe and reliable, offering substitutions for counterfeit masks. Restrictions on mask imports have been introduced—though the government is not outright banning mask imports for China, given the use of Chinese-made masks for non-medical purposes—and the Taiwanese government is introducing new measures among members of the Taiwanese “National Team” to certify genuinely ‘Made in Taiwan” masks, along with new measures rolled out to track the distribution of masks imported into Taiwan. The KMT has, however, sought to leverage on the scandal as a means of attacking the Tsai administration.

Indeed, part of what is at stake is Taiwan’s international reputation and national pride. During the COVID-19 pandemic, Taiwan has won accolades for its successful handling of the pandemic. Taiwanese products exported internationally, such as medical masks, have sometimes been juxtaposed to substandard Chinese products, and the Tsai administration has taken to sending Taiwan’s surplus of medical supplies to other countries in order to strengthen diplomatic relations.

But despite that much media coverage of the issue of Chinese-made masks not being intended for medical use being passed off as Taiwanese masks has tried to highlight the narrative of Taiwanese products being superior to Chinese ones, one notes that the social problem this very distinctly reflects issues endogenous to Taiwanese capitalism. It is, after all, primarily Taiwanese companies that are attempting to pass off non-medical use Chinese products as Taiwanese ones, and Taiwanese companies that are responsible for deceiving the Taiwanese public—returning to longstanding issues regarding companies that prioritize reducing costs to maximize their profits over the safety and health of the public. It should not be surprising that this has continued to take place during the COVID-19 pandemic.