CONTROVERSY HAS broken out after claims that the Taiwanese government has been holding five Hongkongers that fled to Taiwan under detention for the last two months. The Taiwanese government was, for the most part, opaque over past weeks about whether it is, in fact, holding the five Hongkongers—with questions having been raised about whether they have been allowed to see lawyers or contact their families. At the same time, much controversy has ensued about whether or not this information should have publicly been revealed, to begin with.

The China Times originally reported on August 28th about five Hong Kong protesters running out of fuel on their boat near the Pratas/Dongsha Islands while attempting to flee to Taiwan, this incident having taken place in July. Per the China Times, the five protesters were then taken to Kaohsiung after assistance from Taiwanese authorities, and they were not detained. Rumors about five Hongkongers being held by Taiwanese authorities began after this initial report, which actually stated the believed names of several of the five protesters.

The post by Edd Jhong that sparked the controversy

Given the pro-China slant of the China Times, an outlet credibly reported as having taken Chinese government funds and even editorial direction from the Chinese government, Taiwan’s Mainland Affairs Council originally stated that it believed that the report was released to harm Taiwan. As such, the news report was not as widely discussed at the time as one might have otherwise expected.

Controversy primarily broke out after Taiwanese journalist Edd Jhong, who has undertaken work for UDN and PTS, posted on Facebook on Saturday about having helped the five Hongkongers flee to Taiwan. According to Jhong, the five Hongkongers have not been allowed to speak with lawyers, meet with human rights groups, or communicate with their families after being taken to Kaohsiung.

Consequently, Jhong urged Hongkongers to no longer flee to Taiwan, stating that although he was the one responsible for bringing the Hongkongers to Taiwan, the situation was not what he expected. Jhong stated that he was not seeking to criticize the DPP for not doing anything to help Hongkongers, because they did try to help, but that at present, the DPP was hoping that those in the know about the situation remain silent.

In particular, the issue of whether the Taiwanese government is doing enough to help Hongkongers has become a debated issue after twelve Hongkongers that sought to flee to Taiwan by speedboat were intercepted by the Chinese coast guard and arrested on August 23rd, as first reported by RFA. It is believed that they are currently held in Shenzhen, with reports stating that maritime routes previously used by Hongkongers to travel to Taiwan are now blocked by the Chinese coast guard. News of the arrest of the twelve Hongkongers did not break until August 27th, with the China Times report about the five Hongkongers making it to Taiwan published one day after, on August 28th—though, again, this was reporting on a prior incident that took place in July.

The Taiwanese government opened an office to assist Hongkongers—including asylum seekers—in June. But a particularly controversial issue is that, according to a report by RFA, Tony Chung—the convenor of Studentlocalism, a student group targeted by the Hong Kong government in a recent crackdown—had previously been refused travel to Taiwan by the office under the pretext of COVID-19. This raises questions about the use of the new office, if any.

Moreover, Taiwan also lacks any formal asylum application process, instead handling asylum applications on a case-by-case basis. This lack of any formal asylum process has led asylum seekers to be suspended in diplomatic limbo in the past; in late 2018 and early 2019, two Chinese asylum seekers were marooned in Taoyuan International Airport for over hundred days, with the Taiwanese government refusing to grant them entrance to Taiwan, likely fearing provoking China.

With little press exposure, the Taiwanese government seemed content to do nothing about the case—one imagines Hong Kong asylum seekers in Taiwan whose arrival in Taiwan is not reported on could also see the same fate. At the same time, public reporting on Hong Kong asylum seekers currently illegally staying in Taiwan has sometimes pushed Taiwanese government officials into stating that they would step up efforts to locate them. This occurred after purported recordings of Hong Kong localist Lee Sin-yi, who is believed to have been hiding in Taiwan since 2017, surfaced in 2019.

After Jhong’s Facebook post and the subsequent controversy that ensued, Taiwanese state-run news agency CNA quoted a source on Sunday that the Taiwanese government was, in fact, holding the five Hongkongers. However, the report also stated that they had been allowed to speak with lawyers and that they had not been cut off from contact with their families. CNA also stated that though the Hongkongers were being detained, the limits on their freedoms were not as severe as house arrest.

Yet a large controversy had already broken out regarding Jhong’s actions, with a number of civil society activists or politicians close to Taiwanese civil society criticizing Jhong for revealing information that should not have been publicized. This included former NPP city councilor candidate Wu Cheng, former FAPA staffer June Lin, both of whom are former Sunflower Movement activists with large followings on social media, and others.

Lin argued that a “name and shame” approach may work for Taiwanese domestic politics, but this does not apply to high-risk human rights work that must be conducted covertly. In his comments, Wu stated that he did not agree with Jhong’s conclusion that Hongkongers should not come to Taiwan—seeing as organizations such as the Che-Lam Presbyterian Church, human rights NGOs, and others have assisted Hongkongers—while also suggesting the need for confidentiality.

By contrast, Taipei city councilors Froggy Chiu was among those to defend Jhong, asserting that he did not believe that Jhong had revealed any incriminating information through his actions, whether regarding individuals involved in efforts to aid Hongkongers or routes of escape from Hong Kong, seeing as this was already reported on in August. Chiu stated that he trusted Jhong, given his acquaintance with him, but also stated that he would not accept any interview requests from the media on the subject. Activist designer Denis Chen also urged calm, similarly stating that what Jhong had posted had long been published by Taiwanese media, and citing that Puma Shen, an expert on disinformation, had urged calm at the beginning of the incident.

In particular, many criticisms of Jhong online have centered around criticisms that Jhong should not have revealed the number of Hongkongers held by the Taiwanese government, or that he should not have openly revealed the involvement of the Mainland Affairs Council in efforts to assist Hongkongers. Jhong is blamed for having confirmed the presence of the Hongkongers in Taiwan, with few mentions of the previous China Times report. To this extent, some have speculated as to possible reasons for the Taiwanese government detaining the Hongkongers, such as if they are suspected of espionage.

Facebook post by popular commentary page GETGREEEN, which has over 58,000 followers, attempting to link Edd Jhong with Guan Wu-yuan

That being said, one has seen many attempts to attack Jhong’s reputation online, with claims that Jhong’s ex-girlfriend previously wrote an article that revealed the routes that Taiwanese were using to send supplies to Hong Kong. It is claimed that journalist Guan Wu-yuan, who wrote on the subject in an article for Storm Media in August 2019, is Jhong’s ex-girlfriend. Although it has not been confirmed that Guan is Jhong’s ex-girlfriend, one has seen the repeated claim on Taiwanese social media that she is nonetheless, as a way of tarring Jhong by guilt through association. One of the earliest instances of this claim seems to come from a post by journalist Zeng Wei-zhen on Facebook, many photos of which were circulated online. The current version of the post refers to Guan as Jhong’s “good friend”, while a previous version refers to her as Jhong’s “ex-girlfriend,” something that can be seen in the edit history of the post.

The claim is that this report revealed routes for sending supplies to Hong Kong, likely leveraging on similar outrage against a report by the New York Times in December 2019 for revealing too much about the Che-Lam Presbyterian Church’s involvement in efforts to assist Hongkongers. The report was criticized for revealing that over 200 Hongkongers had fled to Taiwan, or that means by which Hongkongers fled to Taiwan involved both air and maritime routes. This later led to a denial issued by the Che-Lam Presbyterian Church.

One notes that many attempts to attack Jhong come from pan-Green Facebook pages with large followings. This includes the earliest attempts to link Guan and Jhong, something that was claimed without any citation or proof. Criticisms of the Tsai administration’s handling of Hong Kong-related matters has been framed by these pages as attacks on the Tsai administration from “leftards”, the NPP, the TPP, Ko Wen-je, Froggy Chiu, and other groups perpetually critical of the DPP, attempting to spur on backlash against any critics of the DPP. The attempt seems primarily to dismiss Chiu’s defense of Jhong through guilt by association with the NPP, the TPP, and Ko Wen-je, since this may have began before any statement on the matter was made by the TPP, and the NPP has so far not issued any particularly strong statement on the matter.

The attempt is further made to claim that, unlike the RFA report on Hongkongers fleeing to Taiwan, Jhong’s Facebook post revealed cooperation between the Tsai administration and Hong Kong protesters. There has been remarkably little mention of that reports about the five Hongkongers begin originally from the China Times report. Likewise, though the China Times report did not suggest such cooperation, a report in the Washington Post published on August 31st stated that the Hongkongers that had been attempting to flee to Taiwan by boat had contacts within the Taiwanese government, stated a source had indicated that the Mainland Affairs Council was willing to assist Hongkongers quietly, as well as that the Taiwanese government had been willing to make some exceptions for travel because of the ongoing COVID-19 pandemic—if not in all cases, as with the example of Tony Chung. 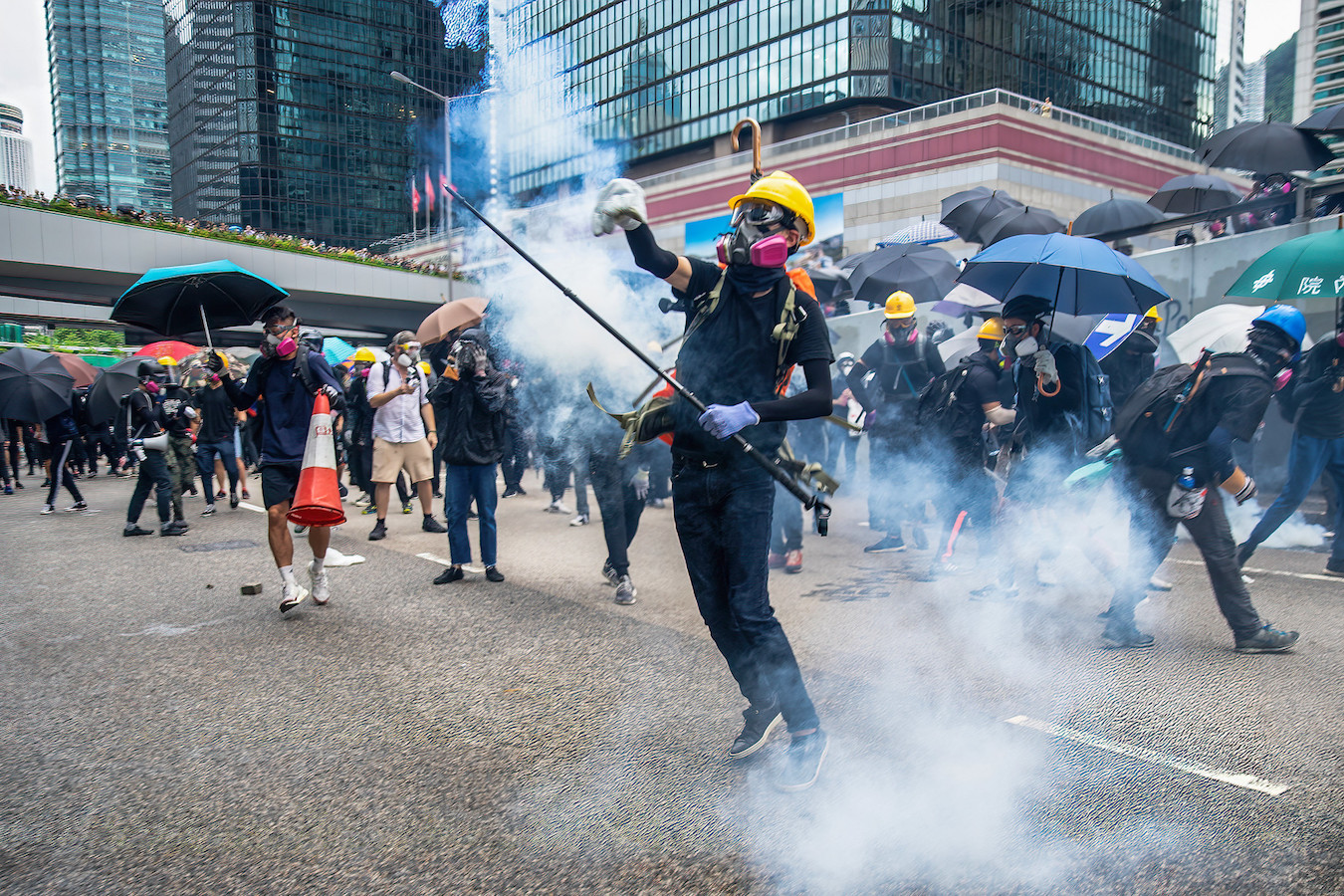 It is generally a matter of concern in past years in Taiwan that political parties conduct information warfare by paying social media influencers or Facebook pages with large followings to disseminate political ideas. In tracing the origins of certain claims made about Jhong that seek to undermine his reputation or attempt to spread certain talking points about the issue—an entirely separate matter from criticisms of Jhong made by public political figures—many of these attacks against Jhong online strike as suspicious in nature.

Much remains to be clarified about the situation. The story continues to be a developing one.