Anger After Forced Evictions for Urban Railway Development in Tainan

ISSUES OF FORCED eviction are back in the news, with outrage from activists and others after attempts by the Taiwan Railways Administration (TRA) to evict residential households in Tainan for the sake of developing the Tainan Urban District Railway Underground Project. 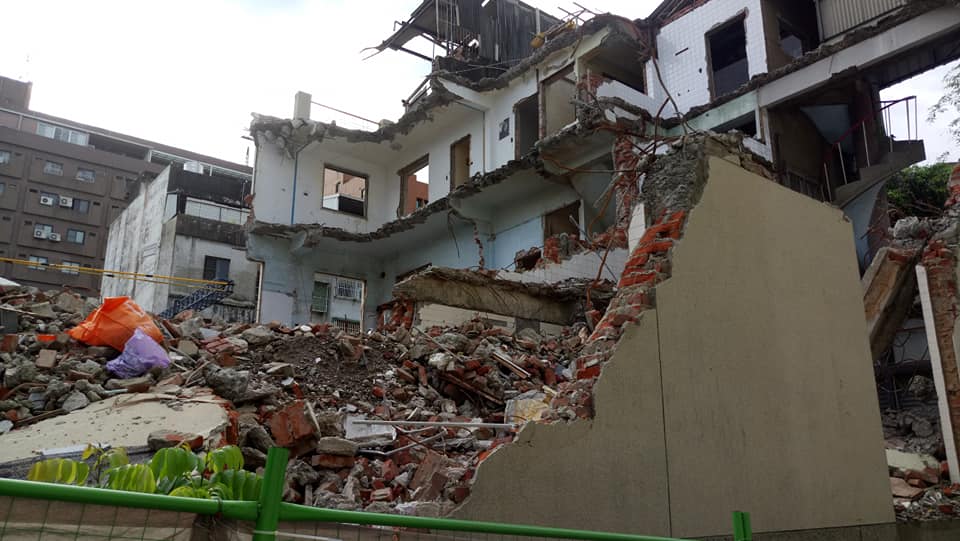 What has proven controversial is the residential evictions which the TRA plans to carry out in order to complete the project. A total of 340 households were required to be displaced for the project. While most households agreed to relocate, five households have refused to agree to the relocation.

Chen Zhi-xiao (陳致曉), the chair of the self-help organization, ran for legislature on a campaign platform of halting the evictions during 2020 elections, but he lost by over 4,000 votes. Xu Shirong (徐世榮), an activist lawyer frequently involved in cases involving forced land evictions who teaches at National Cheng Chi University, such as regarding the Taoyuan Aerotropolis, Songshan Airport, Shilin Wang family struggle, and other incidents, has also been assisting attempts to resist the demolition. Xu’s involvement in the case, particularly after Xu sought to appeal directly to president Tsai Ing-wen, led Tainan mayor Huang Wei-cher to lash out at Xu in public comments attacking Xu for not being a resident of Tainan, giving that he holds a teaching post in Taipei.

As a result, the government announced that they would forcibly demolish two homes on July 21st and the remaining three homes on July 23rd, though the government stated that it would give households more time to relocate and assist them with moving furniture if they consented to the demolition.

Particularly outraging of the public has been that one of the residents of the homes slated to be evicted on July 21st is ninety-nine years old. Both homes that were scheduled to be demolished yesterday are owned by members of the same family, which is surnamed Huang.

Demolition attempts began at 10 AM yesterday. Subsequently, members of the self-help organization assembled outside of the Huang family home to try and resist the eviction. The Taiwan Land Justice Action Union began streaming the demolition attempt as well, gathering over 51,000 views and close to 1,000 comments on its live stream.

Reportedly, over one hundred police were eventually deployed on-site. During the live stream, demonstrators began to hold short speeches as they waited out the confrontation with police, commenting on issues of land justice and housing justice in Taiwan. Social problems touched upon in these speeches include unaffordable housing prices in Taiwan or the demolition of longstanding residential communities and their elderly residents for the sake of commercial or infrastructure development. Some outrage also took place because police prevented journalists from accessing the protest site.

After over eight hours of confrontation with police, the households that were scheduled to be evicted signed an agreement with the TRA at 4 AM that delayed the demolition by two months. However, the households will be required to conduct the demolition of their homes themselves, and to vacate the premises by September 20th. Yet it is possible that this will not be the end of attempts to resist the demolition.

A number of high-profile forced eviction cases, such as the Shilin Wang family struggle, the Huaguang Community struggle, and the demolition of the Chang family pharmacy in Dapu, Miaoli, saw demonstrations from youth activists in the years leading up to the Sunflower Movement. Other examples of forced eviction cases in the years since the Tsai administration took office include the Daguan Community struggle, evictions in the Sanmin district and the Dagouding community of Kaohsiung, and the attempted demolition of farmland occupied by a group of young artists in Tainan. But the public at large is not always sympathetic to forced eviction cases because of the financial compensation that residents are sometimes awarded, despite that it often proves to be something of a death sentence to uproot elderly local residents from the homes they have lived in for decades.

Generally speaking, protests by youth activists against forced land evictions have decreased in size and intensity since the Tsai administration took office, seeing as demonstrations against land evictions in the years prior to the Sunflower Movement were linked to outrage against the then-ruling Ma administration and the KMT writ large. It remains to be seen, then, as to whether future protests against railway development in Tainan will receive broader attention.