A LAND APPROPRIATION case would be presently unfolding in Tainan, with plans by the city government to expand a highway in Sigang District protested by local residents. Highway expansion plans will destroy not only farmland, but also historic sugar railway originally constructed during the Japanese colonial period to transport sugar from the fields to sugar mills and trees with historic value. As such, the Oppose Xigang Highway’s Inappropriate Expansion Self-Help Group (反西港外環道不當開闢自救會) has organized to call for changes to the highway construction plans, and preservation of the sugar railway, other structures of historic value in the area, and historic trees, with calls that the area should be declared a historical preservation site.

Many members of the Oppose Xigang Highway’s Inappropriate Expansion Self-Help Group are local youth activists and local residents. Over the weekend, on the farmland planned to be demolished, members of the group organized a two-day Xigang Community Festival (守護西港農村同樂會) in order to protest government plans to demolish the site on August 31st. This involved performances by bands, DJs, lectures, DIY workshops, and other activities, with organizers billing this as a two-day “Eco-Village”, and the event mobilized local community organizations including the communal living space of the Neng Sheng Xing Factory (能盛興工廠), environmental organization Taiwan Citizen Free Electricity Team (台灣公民自主發電行動團隊), farming organization CSA Tainan (台南社區協力農業), and other groups. Performers included the Bento Band (便當雜誌), The Combobulators (乾杯不累), and other bands. 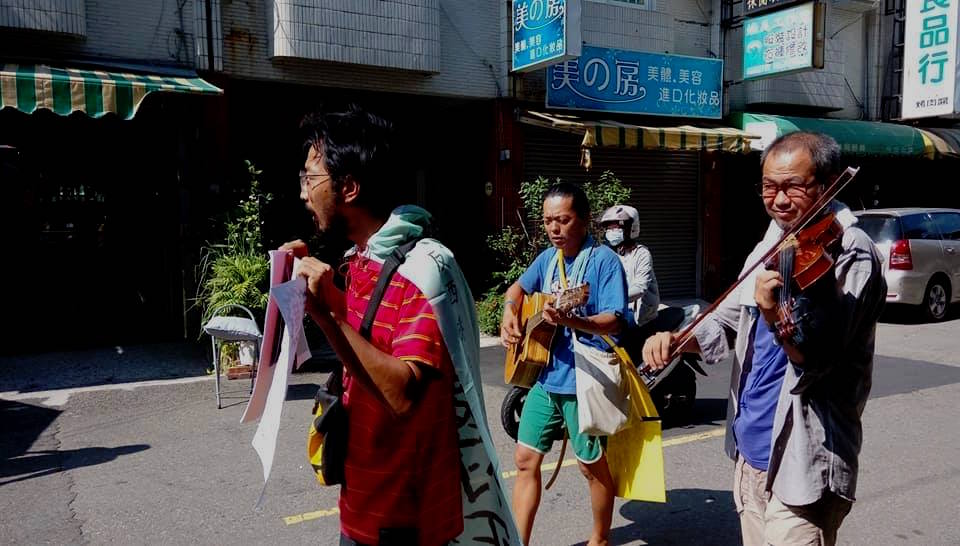 The festival drew several hundred through the course of the weekend. The festival comes on the heels of eight previous events organized in the past two months by the Oppose Xigang Highway’s Inappropriate Expansion Self-Help Group on Sigang farmland, but as a two-day event, it is the largest event organized by the group to date, which formed late last year and has been organizing to protect Sigang farmland since. Organizers claim that construction of the highway will not only destroy historic sites and farmland, but also stand to affect traffic and congestion in the area, and will prove disruptive to the lives of local residents.

The Sigang farmland case would be another of land appropriations in Taiwan, then. Forced residential evictions and land appropriation were hotly demonstrated by Taiwanese youth activists during the Ma administration, as one of the pivotal causes that youth activists rallied around and built organizing networks through in the lead-up to the Sunflower Movement. Oftentimes, residential evictions and forced land appropriation were justified by the need for commercial development or infrastructure development, though due to the prevalence of political corruption at the local level in Taiwan, with local politicians working together with development companies and elements of organized crime in order to drive off residents of areas for redevelopment in order to profit, sometimes what is supposedly infrastructure development turns out later to truly be meant for the sake of commercial development. Or, sometimes, development companies simply wish to profit off of government bids for infrastructure construction projects.

Either way, residential evictions and forced land appropriation occurs both within urban areas, as seen in high profile cases as the Shilin Wang family struggle, Losheng Sanatorium struggle, Huaguang community, Shaoxing community, and other military dependent villages, as well as rural areas, as seen most famously in the Dapu, Miaoli incident. In cases when youth activists call for preservation of historic sites, this is indicative of the way in which Taiwanese youth activists are attentive to local issues, such as the campaign to preserve historic trees near the construction site of the Taipei Dome or the art space that artists had made for themselves in the Nangang Bottle Cap Factory, youth activists’ concern with local history may in part return to their sense of Taiwanese identity, particularly regarding youth activists that returned to their hometowns after some time away in order to take up local causes.

As such, after the Sunflower Movement, political forces which rode into power on the basis of support from Taiwanese youth activists such as current Taipei mayor Ko Wen-Je and president Tsai Ing-Wen vowed to put an end to forced evictions and forced land appropriation in Taiwan. Nevertheless, both the Ko administration and Tsai administration would go back on past campaign promises, with Ko demolishing historic structures as the Nangang Bottle Cap Factory despite a promise not to and the suspicious demolition of the home of a Chang’An West Road resident in March. Likewise, the Tsai administration’s Forward-Looking Infrastructure Bill still contained provisions allowing for forcible land appropriations, prompting comparisons from youth activists suggesting this indicated the Tsai administration was not so fundamentally different from the Ma administration. And Tsai administration officials such as Minister without Portfolio Chang Ching-Sen has in the past at youth activists demonstrating against eviction of the Wang family in Shilin because the Wang family later received compensation worth several hundred million NTD following the destruction of their home—comments indicating a decided lack of sympathy for individuals affected by public policy and a highly technocratic view of the world, if anything. 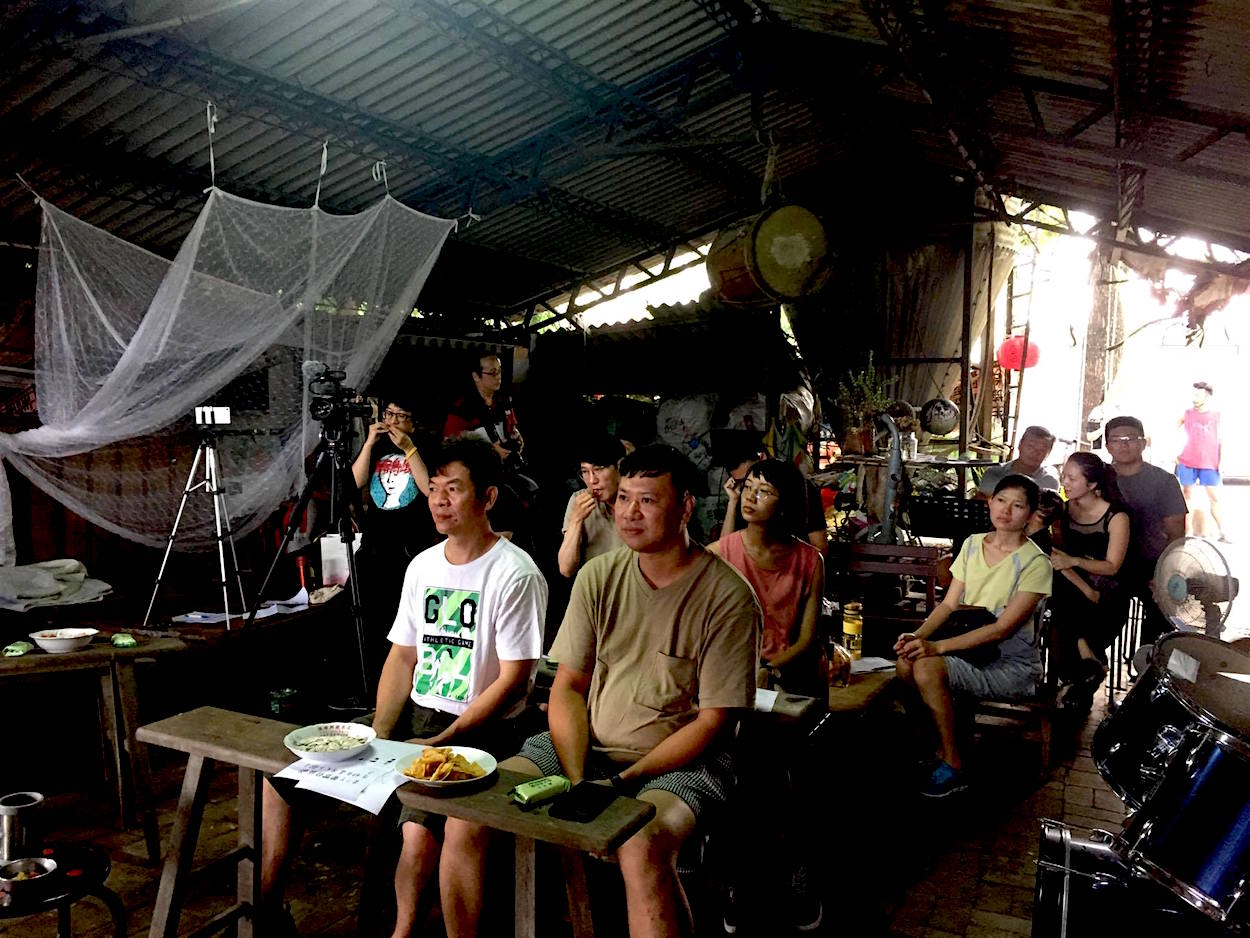 What proves a common feature of such demonstrations is a flourishing of creativity, with art forming an integral part of protests, as also seen during previous struggles against forced evictions, the Sunflower Movement itself, and two-day art festival held in Sigang this weekend. Indeed, Taiwanese activists have in past years come to form something of a youth subculture in Taiwan, as reflected in their means of protest against what they see as government injustices. However, will youth activists be successful in forcing the Tainan city government to back down from its development plans? That remains to be seen.